A cozy quilt that began life in cyberspace 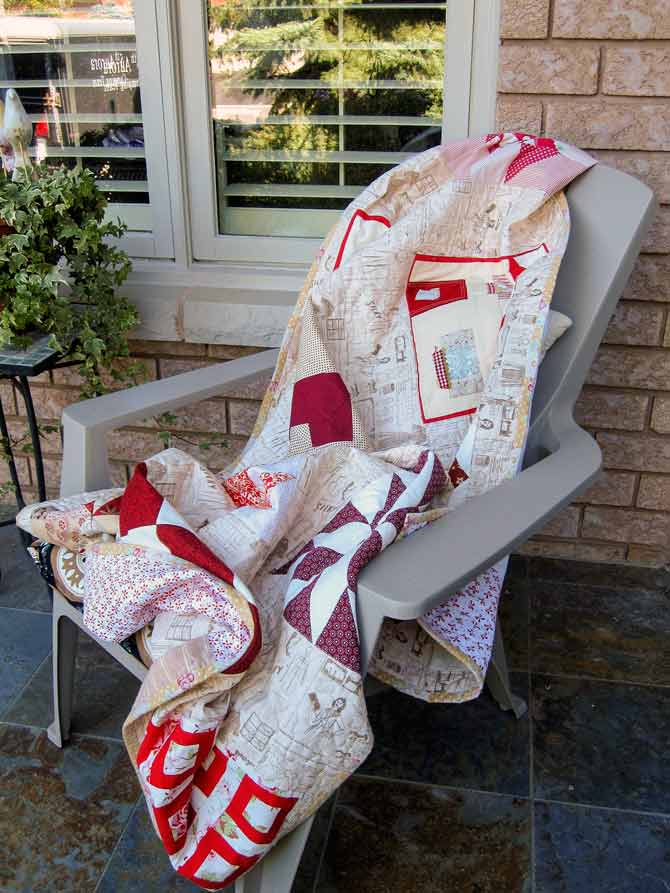 A cozy throw warms chillin’ time on the front porch.

Since the Fall of 2006, I have been a Facebook devotee.

Our daughter graduated from high school and had been accepted to do a nine-month community service program.The postings were far flung, and Internet — even phone communications — were in no way guaranteed. Social networking was the easiest option to keep in touch. We could send messages, and she could find them whenever she was near a library or an Internet cafe. 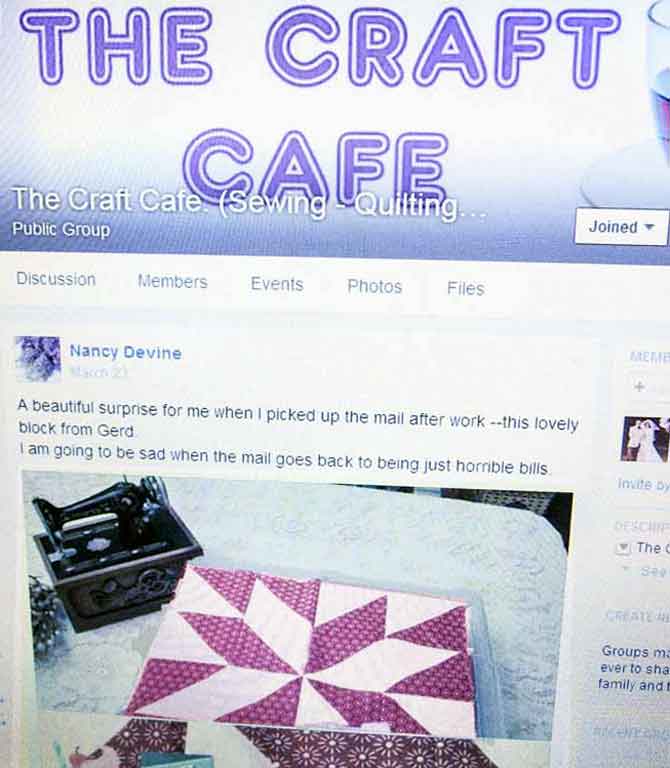 Not only did I keep in touch with family members and friends, I also discovered a great group of virtual friends on a page called The Craft Cafe.

Initially, we bonded over a shared admiration for the work of Tone Finnanger, a Norwegian craft/quilt/sewing designer, creator of the quirky and pretty Tilda range of books, fabrics and crafty ware. There were six of us at the beginning — mostly from Europe — I was the lone North American.

Over the years, we have grown to a group that includes crafters, quilters, sewists, stitchers, knitters, bakers, crochet artists, and a few hundred more things I’ve likely forgotten.

We are from Europe, North America, Australia, New Zealand, Norway, Finland — we have yet to have a member from the International Space Station — but it’s just a matter of time.

We may never meet, but we are, just the same, friends.

Last year, Christina from the UK suggested we do a birthday block swap of 12.5″ square blocks, any style, any pattern. The 12 who signed up stated their color preference and birthday month. At the end of their birthday month, everyone in the swap would have 12 blocks. 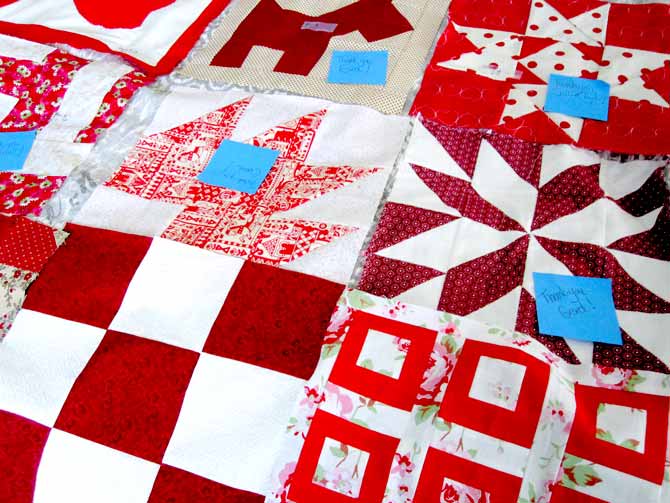 Pretty red and white blocks began arriving in the rather dull month of March.

There was some fear and trepidation in this. Patchwork isn’t my strong suit. I’m not careful or tidy. My points often don’t match up, I have trouble observing the 1/4″ seam rule.

I signed on anyway. It has been a joy to be part of the brave souls — a few of us are experienced — and many eager to learn, diving into tutorial and Pinterest. My March birthday this year was filled with packages arriving with beautiful quilt blocks. As each block arrived, I stuck a blue sticky note on it, took a photo and posted to the cafe page, so that the creators knew their much appreciated handiwork had arrived safe and sound.

This week on QUILTsocial, I’ll be turning my friends’ lovely works of art into a cozy throw that will have added warmth from the care and love included in each seam.

Come back tomorrow as we experience the making of a cozy quilt that began life in cyberspace (aka the Cafe Comforts Cozy Quilt) using some basic quilting know-how and an ironing/pressing cover, a very useful addition to my Studio Collection Hobby and Design Table.

Nancy Devine is a self-confessed craft-crazed blogger. She is a regular contributor to A Needle Pulling Thread Magazine, one of the administrators for The Craft Café, a Facebook page devoted to the international sharing of the creative life, and a curator of an impressive collection of fabrics, notions and seam rippers. In her spare time, she wrangles dust bunnies and writes a blog called Nancy Dee Needleworks. Understandably, her house is a mess.

Layout and design begins on the cozy quilt

Small quilting projects to make with bits and...

The many uses of Odif adhesive sprays