Finishing off the serged jelly roll quilt with a border

Welcome back to the jelly roll madness. I’m using the  Husqvarna Vining HUSKYLOCK s25 serger to sew my jelly roll quilt together.

If my post yesterday, you saw how quick it was to get the serger set up for the ¼” seam allowance, how to sort the fabrics, and you also learned how easy it is to rip out a seam should you make a mistake like I did!

Today, it’s all about getting this quilt together and fast. 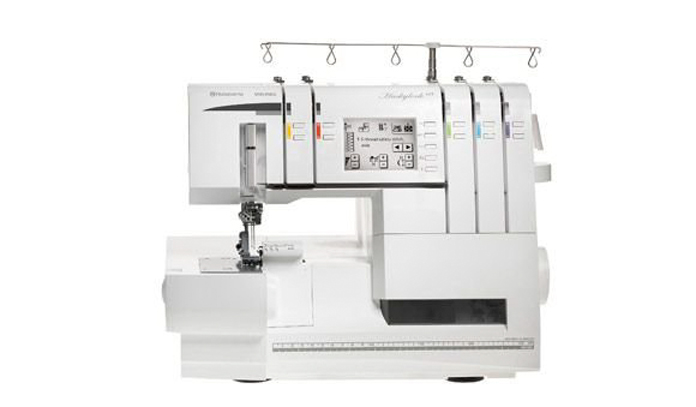 After all the strips have been joined end to end, make sure to cut part of one strip away so when sewing the long strips together, the short seams don’t fall beside each other. I cut about 20″ away. Make sure to trim the selvage from the other end as well.

Then lay the two ends on top of each other with right sides together. It doesn’t matter if the strip is twisted. 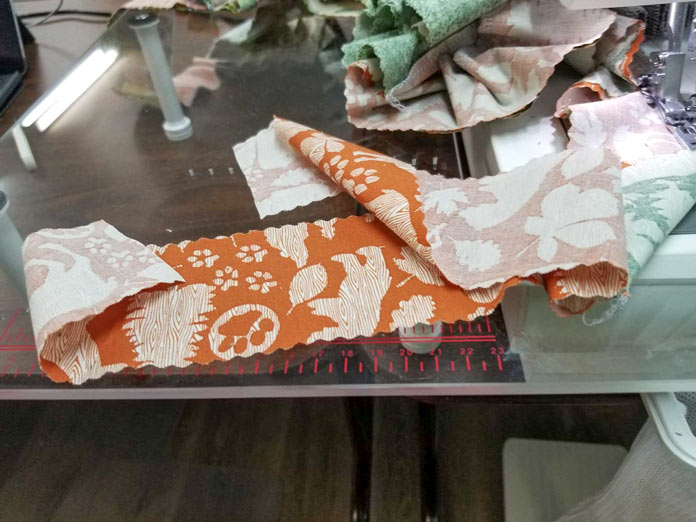 After I had the two ends of the long strip in my hand, I plopped the rest of the bundle on the floor. 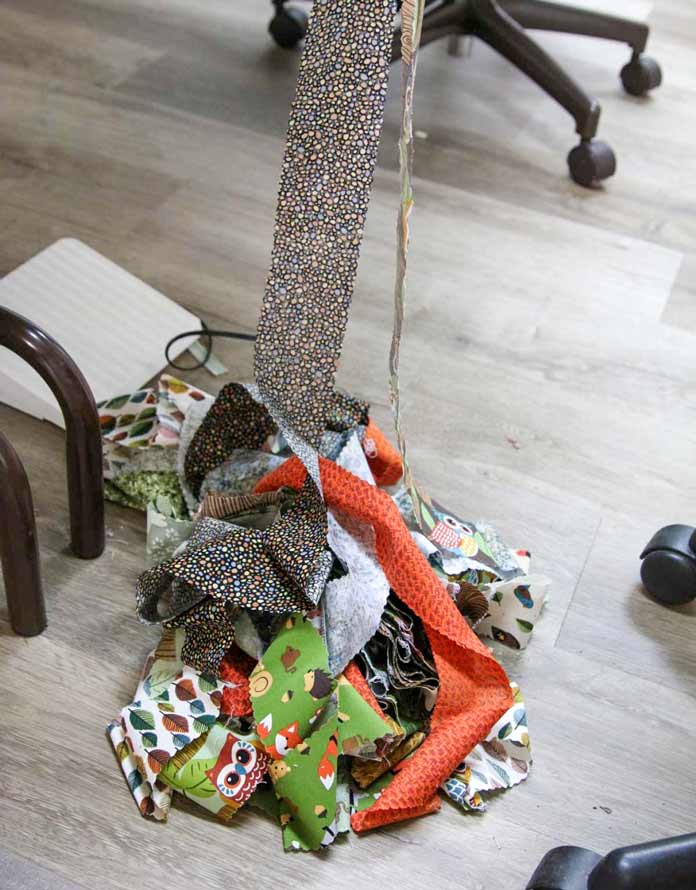 The bundle of strips was placed on the floor

Remember those long threads that resulted from chain serging the strips end to end? Since I have the cutter engaged, those thread ends will be cut off. No need for me to do that by hand. More time saved!

Notice I’m only cutting the threads off, not the fabrics. 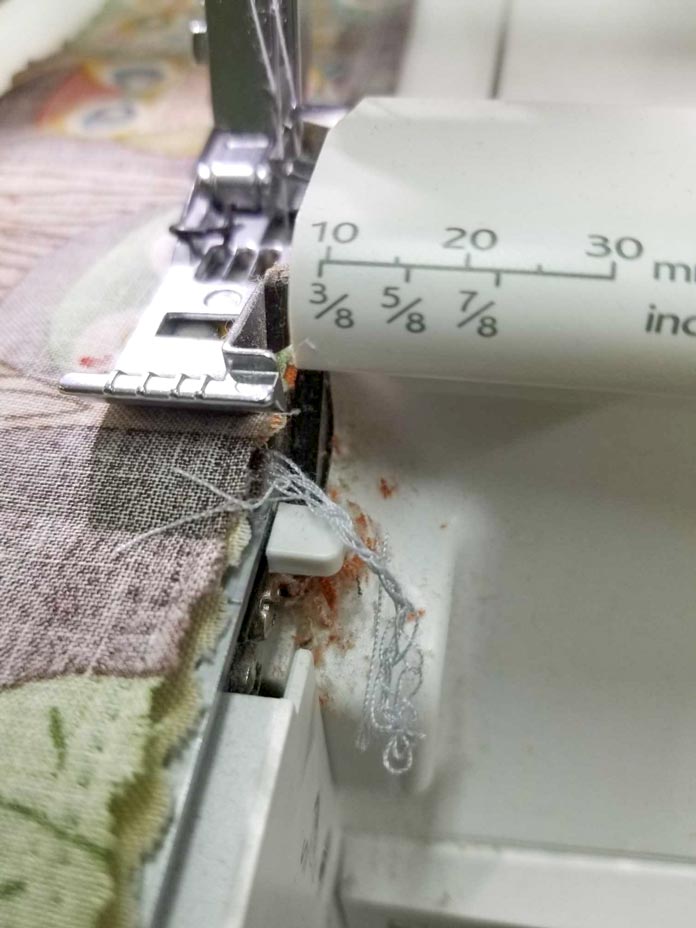 Thread ends are being trimmed with the cutter

Here’s another time-saver. I mentioned my strips had been hand-cut at a local shop. They were not even. Some strips were wider than others. Instead of me trying to recut them, I simply used the serger to cut off the excess fabric whenever it needed to be cut off. 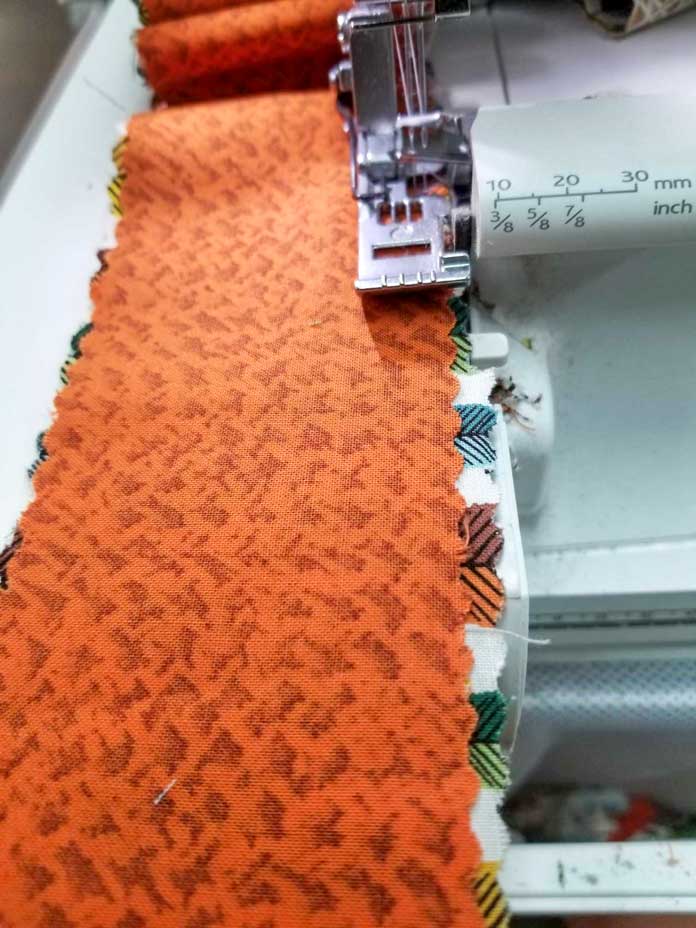 I placed my finger between the two strips to act as a guide which helped to line up the two strips. My strips weren’t exactly lined up but that’s OK. They were close enough. I’m making a jelly roll quilt, not an heirloom. 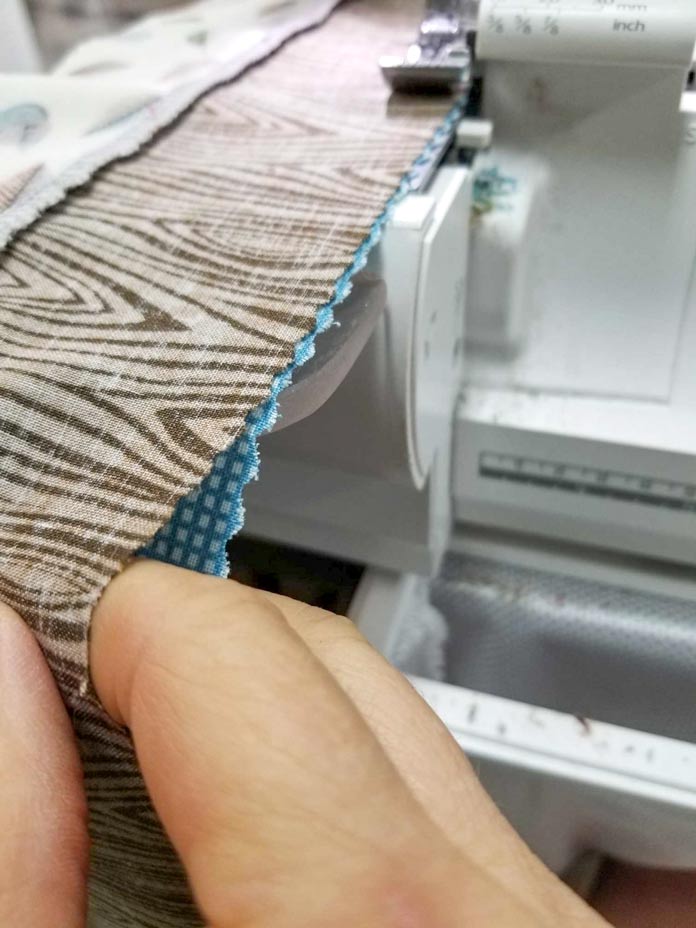 At the end of the first seam, the fabric strip may be twisted or it may not. Simply take a pair of scissors and cut through the middle of the long strip so I can sew off the end. Make sure to cut the strip before serging to the end or you won’t be able to serge to the end.

I didn’t take a picture at the end of the first seam, but there’s one in another seam to show what I mean.

I’m a presser. I like to press all seams as I go. So I took my wide, short quilt to the ironing board and pressed the seam towards one of the fabrics.

As I pressed the seam, I folded the double-wide strip accordion-style so it wouldn’t twist on me. 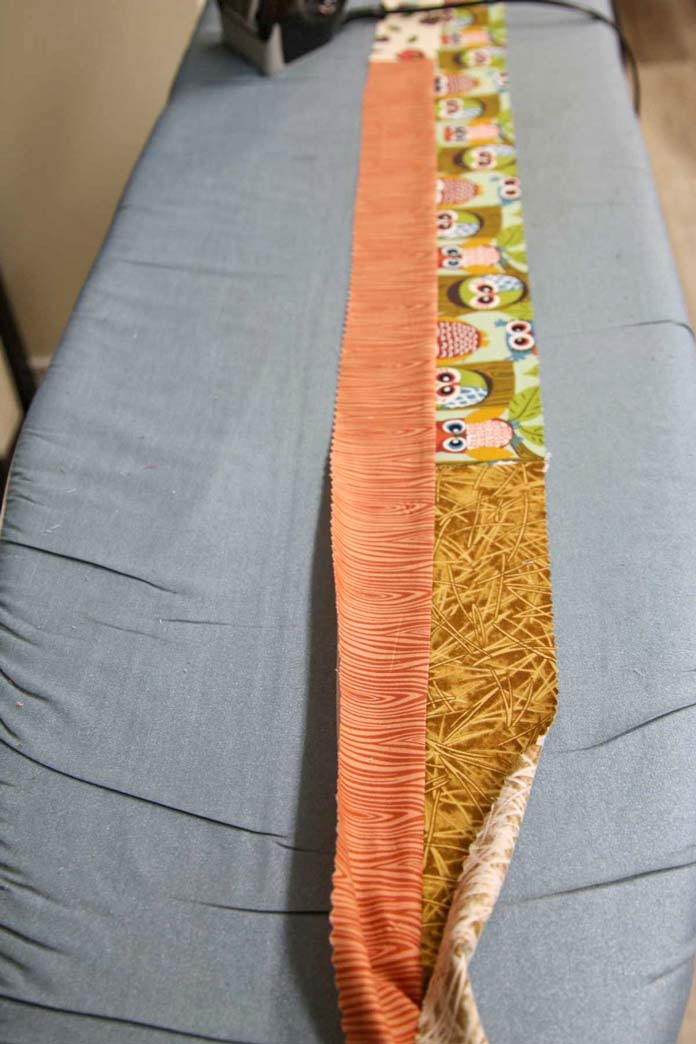 I will repeat this same process for the second seam. Grab the beginning and the end of the 2-strip wide piece being careful to not twist the strip. If you created an accordion-fold when you pressed the seam, this will be easy. Lay the two ends right sides together and serge away. Again, I plopped the pile on the floor. If I keep both ends in my hand and the fabric is not twisted, it’s no problem to do this. 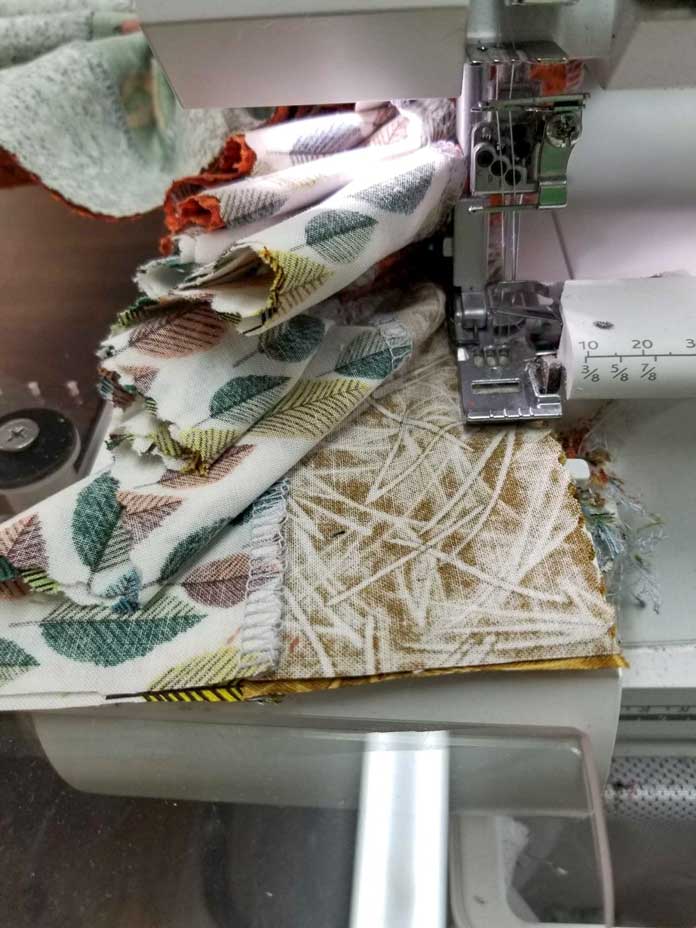 Then I went back to the ironing board and pressed the seam to one side. I folded the strip accordion-style to prevent twisting when I went to match the bottom end with the top in preparation for the next seam. 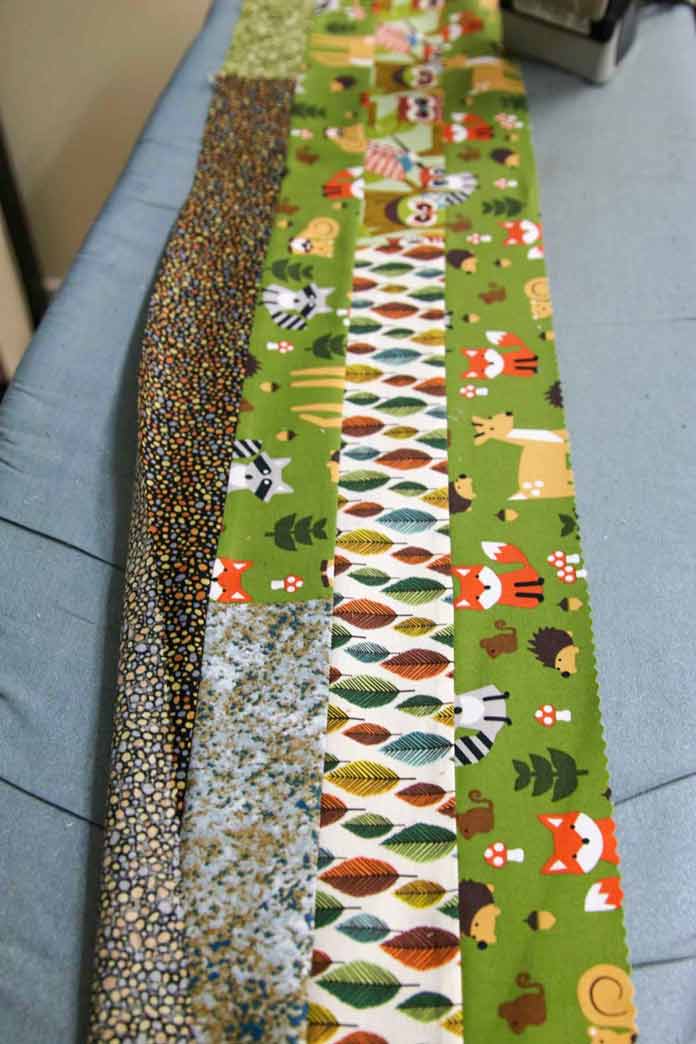 The process is the same as for seam one and two. Each of my quilt sections now has four strips of fabric in it. Notice how much space I still have on the HUSKYLOCK s25 serger extension table. That’s a lot of room and no danger of fabric falling off the edge of the table.

Be careful when you arrive at the short seams so they don’t get twisted. 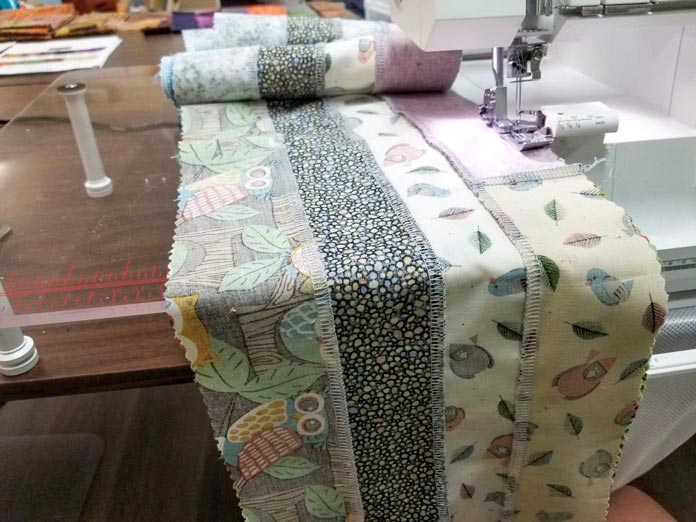 Plenty of room on the extension table to support the project

In this photo, I’m arriving at the end of the seam three. You can see I’ve arrived at the ‘middle’ of the big strip. I used my scissors to cut the end open and then serged off the end. 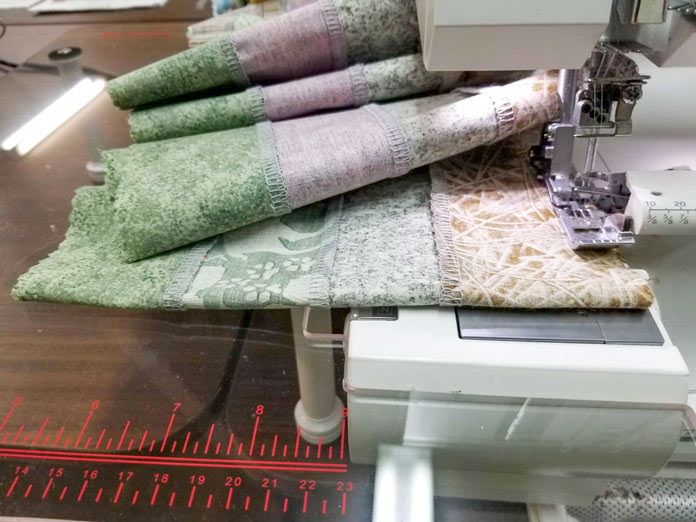 Then it was back to the ironing board where I pressed the seam to one side.

Not all the seams will go in the same direction. It’s the nature of this style of quilt and there’s no issue with the direction in which the seams are pressed on the jelly roll quilt. 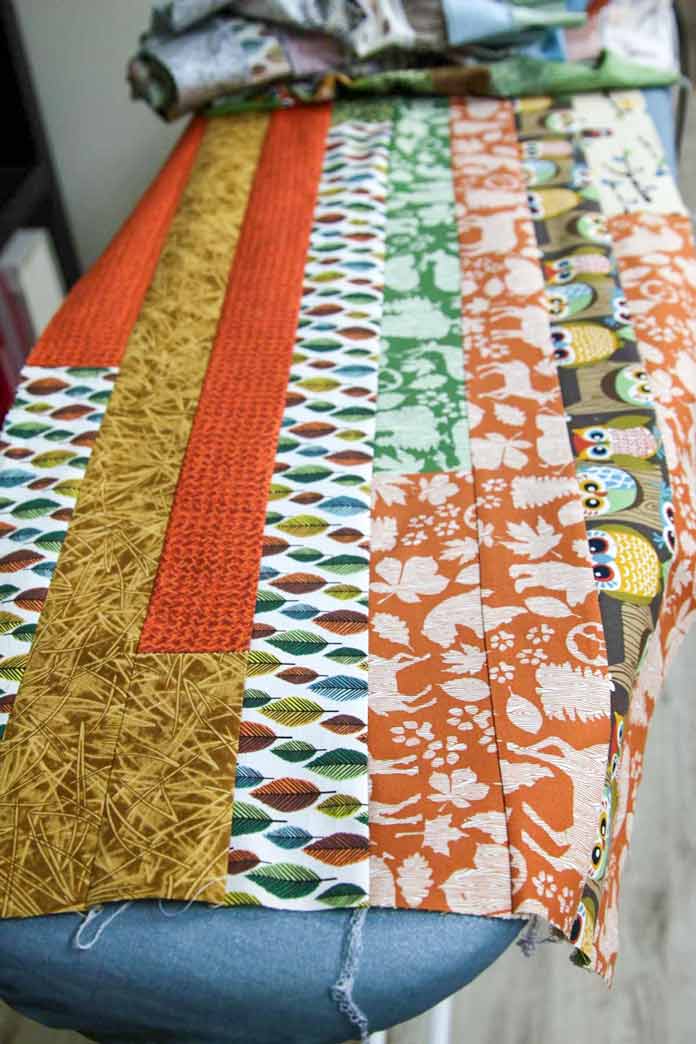 I will repeat this process one more time. Notice I still have room on the extension table to support the quilt. 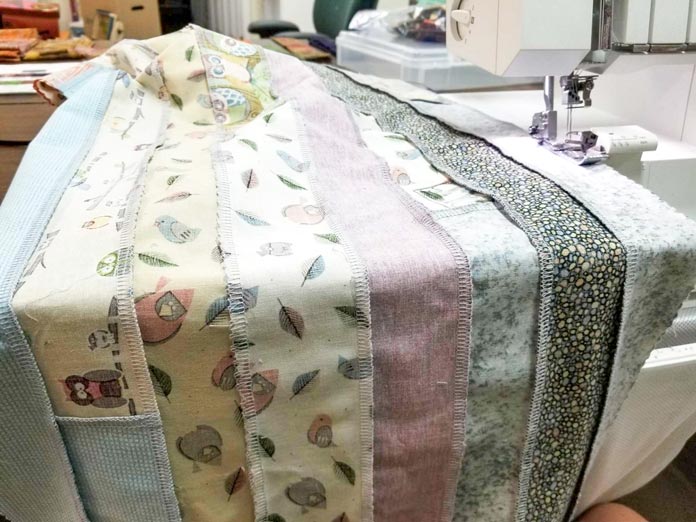 I’m using the scissors to cut the bottom open before I get to the end of the seam. It’s easy to cut because of the width of the extension table. 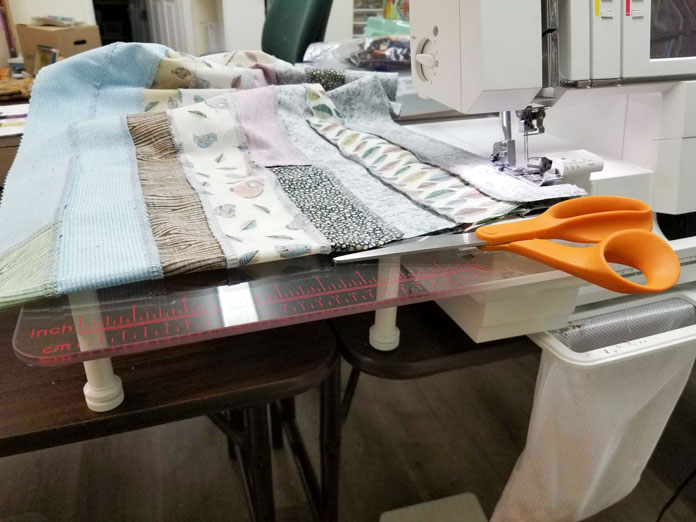 Cutting the bottom loop on the fourth seam

Seam five is the same, except I folded the strip in half and cut it while it was on the table. Then I joined the two halves and serged the last seam. 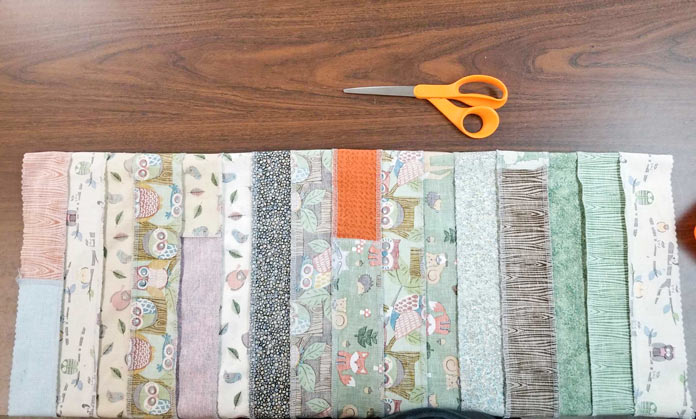 I’m serging the final seam and there’s still lots of room on the extension table to hold the quilt. 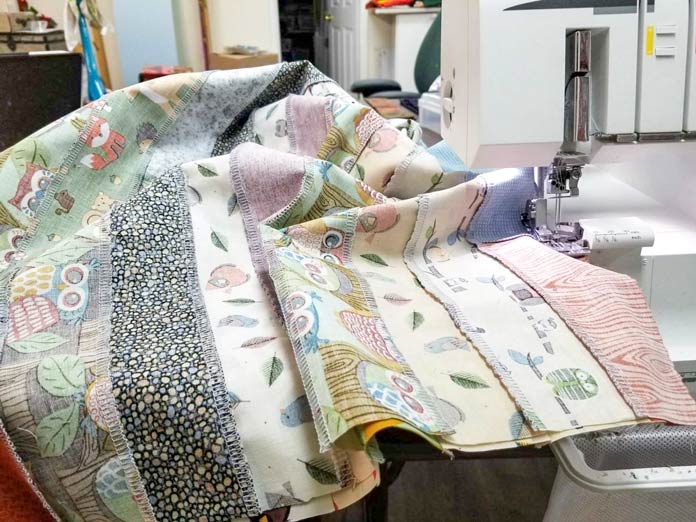 Serging the two halves of the quilt together

Out of curiosity, I measured my quilt when this part of it was complete. By the math calculation in yesterday’s post, it was supposed to measure 50½” x 64½”. That’s in an ideal world. My top measured 53½” wide because my fabric strips were slightly longer than 40″. The length ended up being 65½” because some of the strips were a bit wider than 2½”. I’m thrilled with the results.

But I want to put a border on it to make it just a wee bit bigger.

When I bought the jelly roll, I had also purchased 1 yard of a coordinating fabric. It was directional. I hate directional fabric. That’s not true – I like it, it just requires special handling.

I cut enough strips parallel to the border for the sides of the quilt.

Notice I did cut the selvage off as I was cutting the strips. 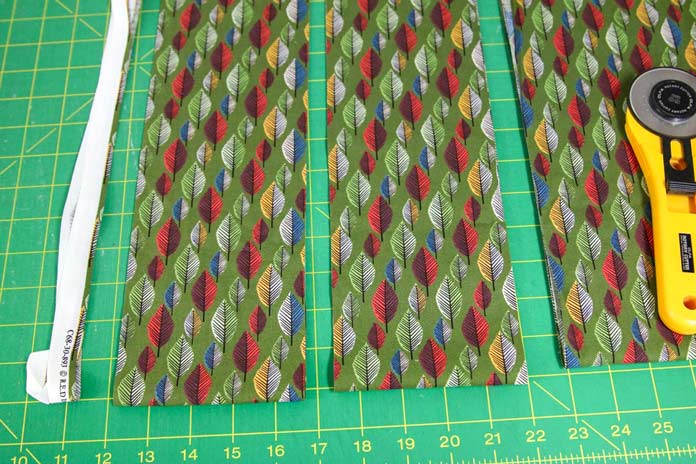 Cutting directional fabric parallel to the selvage for the side borders

Then I cut crosswise strips for the top and the bottom borders.

There’s an entire science to this process which I won’t get into here. While I like directional prints, they take a bit more thought when cutting if you want them to remain in the correct orientation. 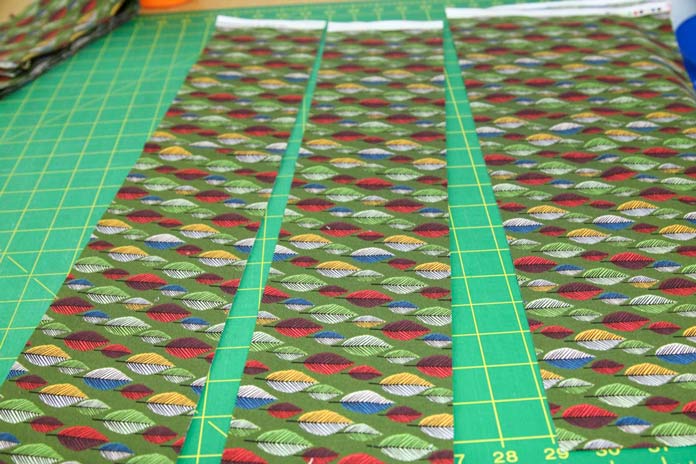 Cutting crosswise strips for the top and bottom borders

Because of the print, I cut off the selvages and joined the strips using a straight seam on the serger rather than a diagonal seam.

I then proceeded to measure and cut my borders as I would with any quilt. 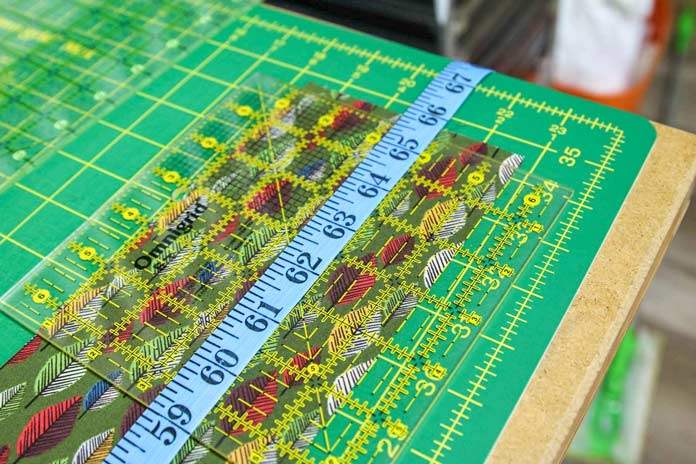 Measuring the length of borders required

I pinned the borders to the quilt just the same as if I were using the sewing machine. I’m not a pinner for normal piecing, but I always pin borders as I want them to help square up the quilt.

Note: REMOVE ALL pins before you get to the cutter. You do NOT want to run a pin through the cutter. 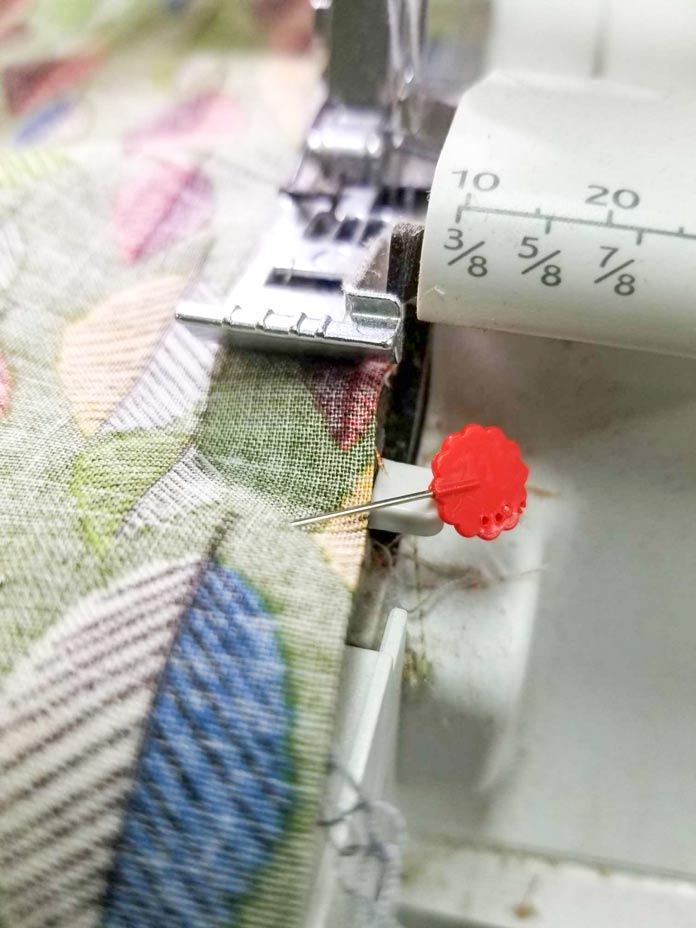 Remove the pins before it gets to the cutter

As I add the borders with the serger, I’m again cutting any of the loose threads away. 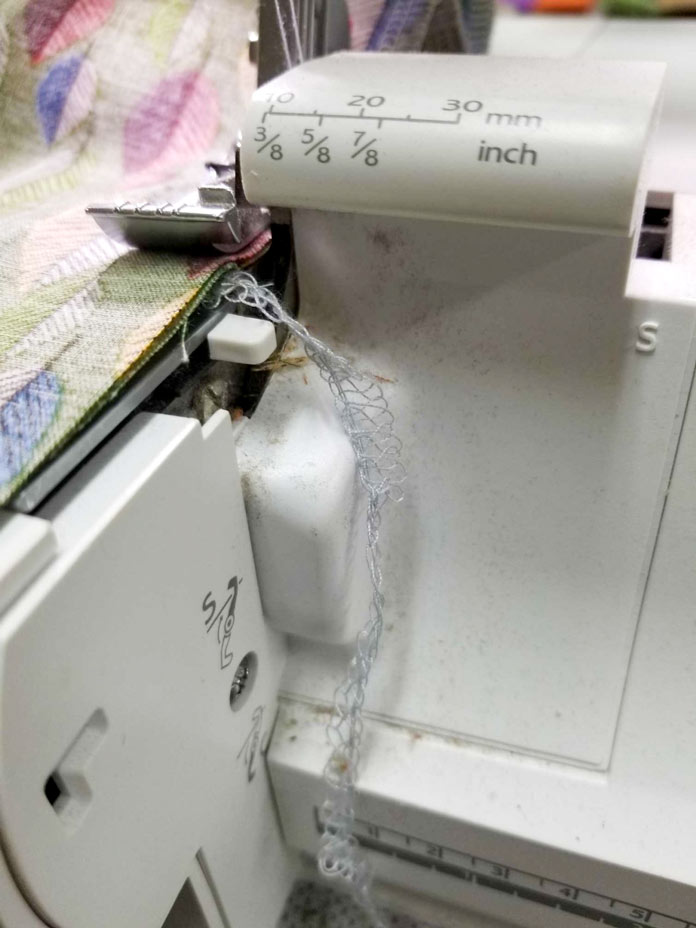 Trimming the threads using the cutter

And in a very short time (less time than it took to write this blog post), the quilt top was together.

Have you ever seen such a tidy quilt backing??? It’s pristine!!! No loose threads or frayed edges. I know my strips were pinked to start, but the back of the quilt would look the same even if the edges were NOT pinked.

It doesn’t get any easier than that. I could easily make several of these quilt tops in one day. 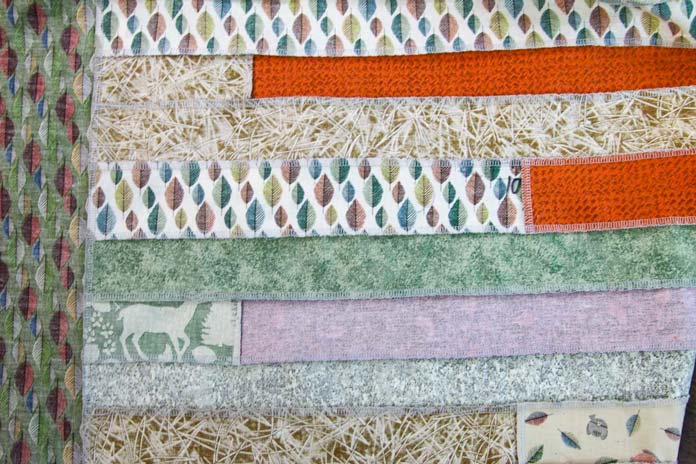 The back is almost as neat as the front

I pieced the binding on the sewing machine as I wanted to open up the diagonal seam to help reduce bulk in the binding.

I’m on a kick to get everything in my studio super organized. I have a lot of fabric yardage that was purchased for quilt backings. Most of it was hidden away behind other things and not easily accessible.

I’ve now got all the backing yardage on open shelves and each piece has been measured (roughly) and the yardage is pinned to each piece.

It’s scary how quickly I can find an appropriate fabric for the quilt backings. I’m talking seconds here – not minutes or hours! 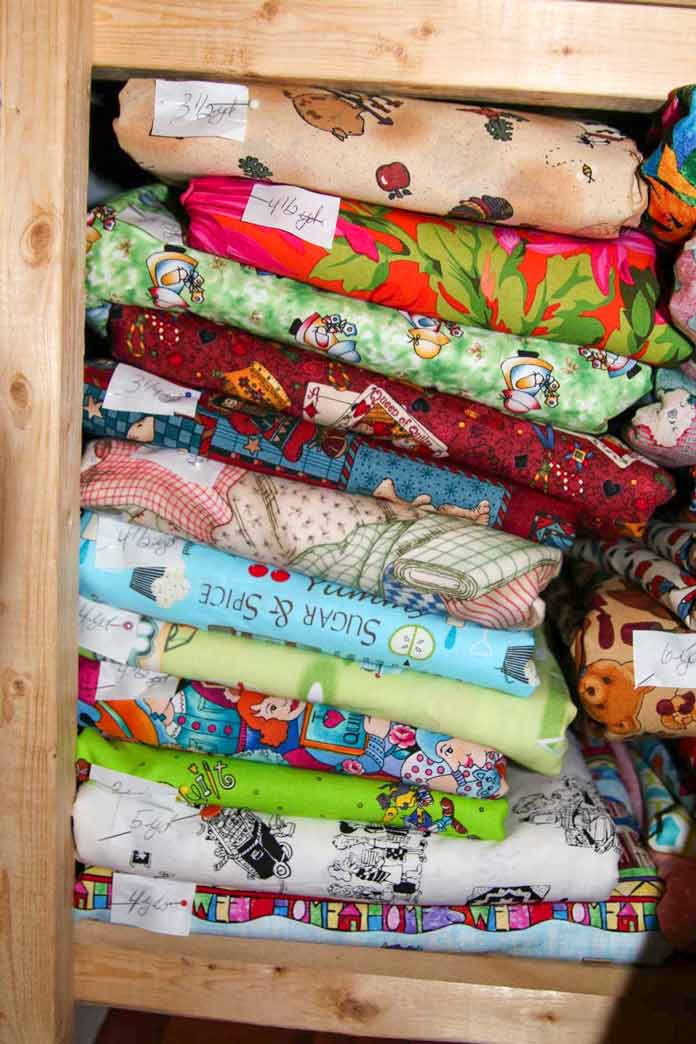 Yardage amount is pinned to each piece of backing fabric

I cut the yardage in half and instead of trimming off the seam allowances with the rotary cutter, I used the serger to trim the selvage and sew the seam at the same time. 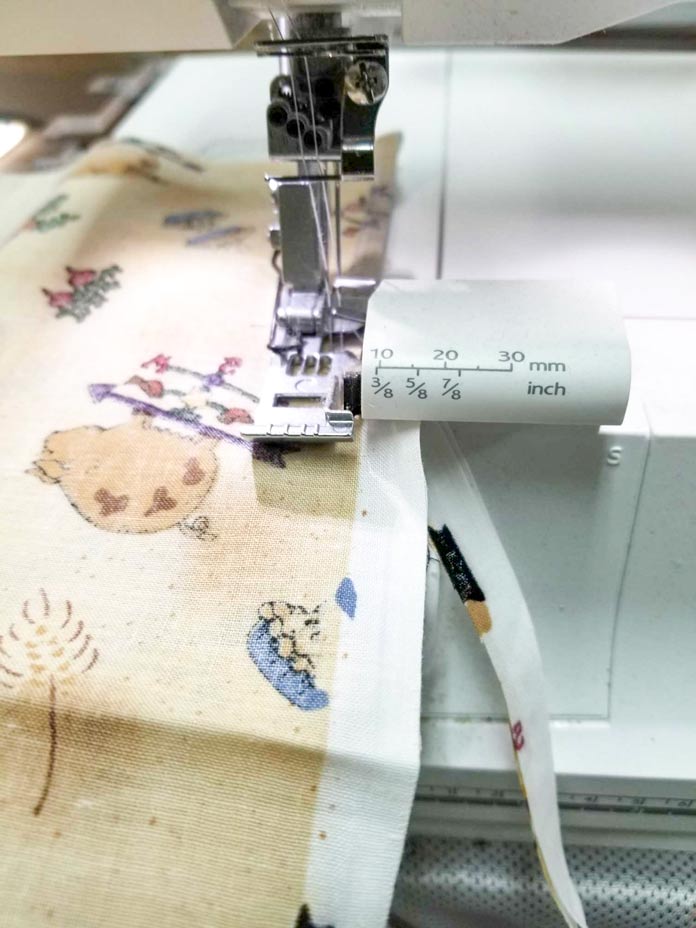 Trimming and serging the seam for the backing in one step

It doesn’t matter what Murphy is doing, but the moment I lay out a quilt for a picture, she’s there to inspect. I think it’s more likely she likes having her picture taken! 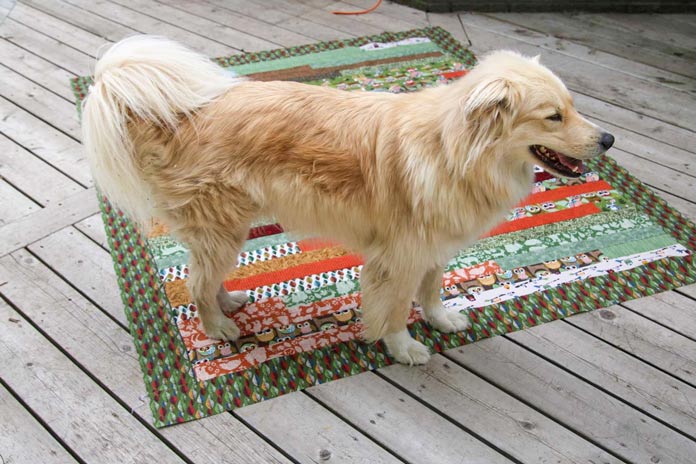 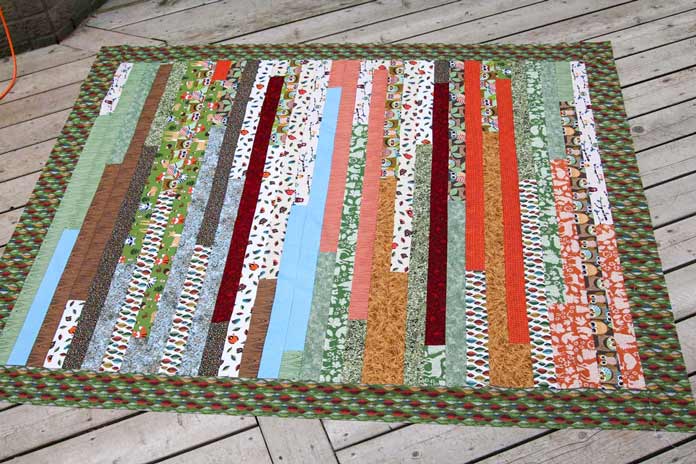 When I finish a quilt top, I like to also make the binding and the backing at that time. It’s a lot harder to not finish the top when everything is ready.

Did you notice even with all my ‘planning’, many of the colored strips ended up side by side? I don’t know why I even bother to do any planning! 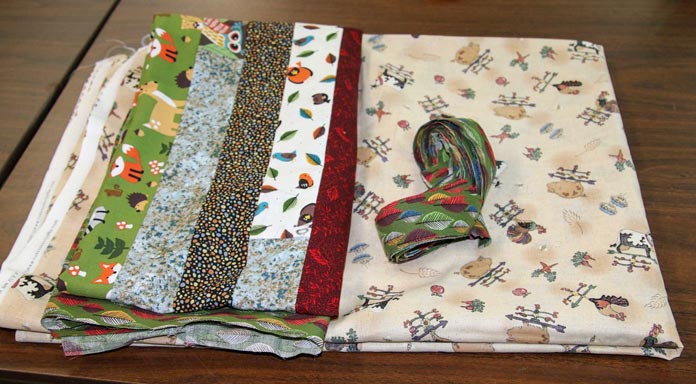 The binding, the backing, and the quilt top – ready for quilting

There you have it. A fast way to put a quilt top together.

If you’re a member of a group that sews quilts for community projects, you should consider the jelly roll quilt and the Husqvarna Viking HUSKYLOCK™ s25 serger. The quilt goes together fast, there are no threads to trim and you save so much time by using the cutter on the serger to get rid of all the loose bits.

I think I’ll be using the serger for quilting a whole lot more.

I’ve got one more exciting project to share with you tomorrow. Be sure to come back for that.

This is part 4 of 5 in this series.
Go back to part 3: How to piece a quilt using a serger

How to piece a quilt using a...