Welcome back! I’m so excited to be introducing the Husqvarna Viking Designer Ruby Royale sewing machine to you. I’ve learned so much from this review and I’m delighted to share my adventures with you.

While I have been excited about all the Husqvarna Viking sewing machines that I reviewed over the last couple of months, I have to say that I’m super excited about the Designer Ruby Royale. The more I learned about the capabilities of the sewing machine, the more I wanted to sew with it. I dug out unfinished projects that had been hanging around for years and I tried all kinds of techniques. Just wait – you will be blown away!

Like a good girl, I opened the box, took out the User’s Guide and had a quick peek (yes – I really did that!). My first thoughts – “I love the purple/green color scheme of the screen menus.”  Yep – doesn’t take much to get me revved up!

I hope you come back each day this week while I explore some of the many features of the Designer Ruby Royale. Not only will I be reviewing the sewing machine, but I discovered a couple of things that – well I didn’t think they could be done by sewing machine or at least could not be done well. I’ll be sharing those discoveries with you.

Today, I’m going to review a few of the physical features of the Designer Ruby Royale sewing machine. We’ll have a look at some of the stitches and many other features over the week. I’ll have a small project for you as well. 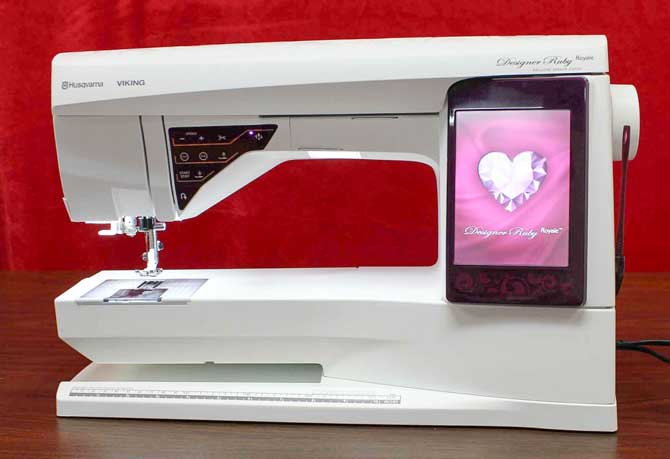 This sewing machine lives up to its name as there are many “ruby” colored features on the sewing machine including the color of the screen saver, the stylus and even the trim. As well, the lights on the function panel are ruby. How cool is that!

One of the features I love about the Husqvarna Viking line of sewing machines is that some of the accessories are interchangeable between sewing machines. Here’s the Designer Ruby Royale with the extension table I love so much.

One of the many features of the Designer Ruby Royale that I’m very excited about is shown in the picture below. Do you know what this is? 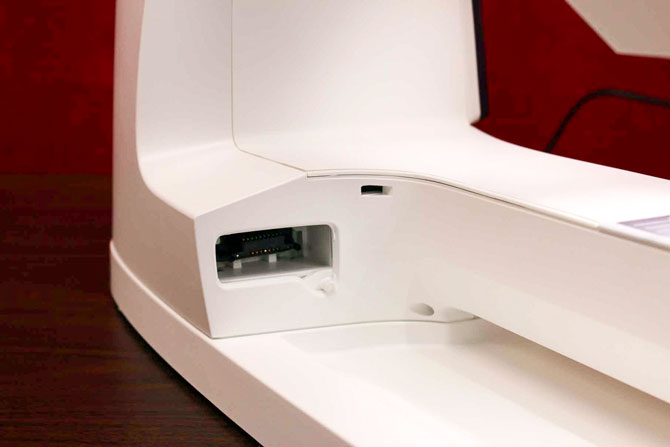 Yes! In addition to its many features, the Designer Ruby Royale is also an embroidery machine. 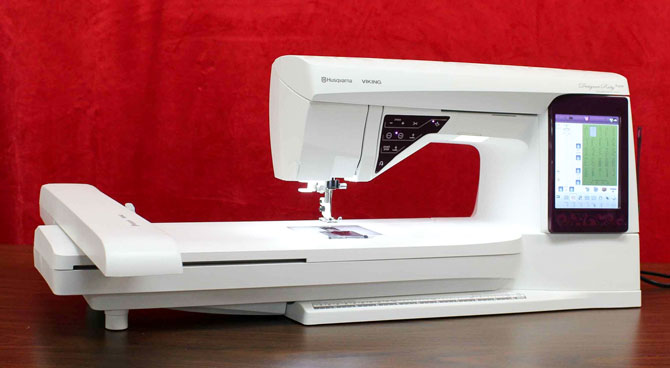 As a quilter, I’m not a big embroiderer, but I’ve had the ability to do machine embroidery for years and I wouldn’t be without that feature on my main sewing machine. Over the course of my review, I’m going to show you some neat ways you can incorporate machine embroidery with your quilting. I can’t wait to get started with that, but there are so many other things to share with you first.

The Designer Ruby Royale has LED lights installed on both sides of the needle and in the middle of the throat space. Having good lighting is so important. It means we can sew longer due to reduced eye fatigue caused by insufficient lighting. It also means that we have less difficulty sewing dark fabrics!

Here’s a close-up of the Function Button Panel which I’ll explore in more depth later this week, but I thought it was a fabulous touch that the lights are RUBY colored! Now I realize that the color of those lights does not add any functional value, but attention to this kind of small detail means the designers have more than likely paid attention to other small details.

I’ve seen the attention to detail in previous models of the Husqvarna Viking sewing machines and can’t wait to find more of those little details in the Designer Ruby Royale. 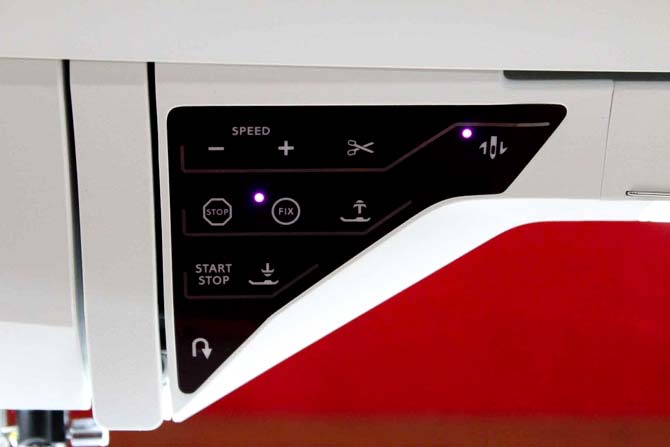 Note that there is no take up lever on the back of the sewing machine. This task has been automated, but you can still raise and lower the presser foot by the use of a button on the Function Button panel. A little scary at the beginning, but once you get used to using the automated feature – you won’t want to go back to a manual take-up lever. 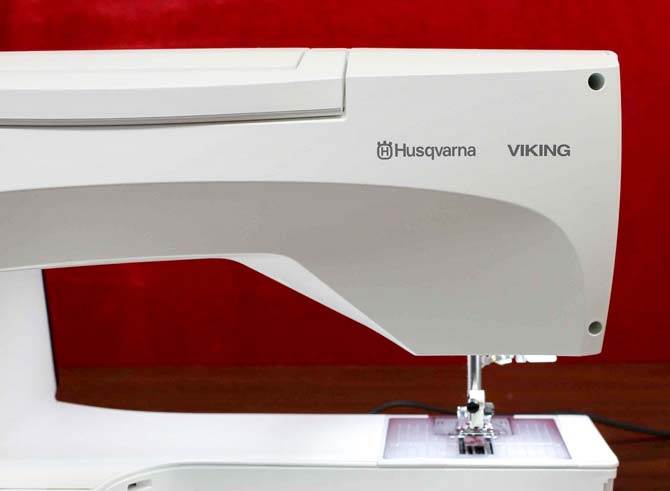 No take up lever on the back of the sewing machine

The stylus is well-placed to the right of the large interactive screen. The location makes it easy to grab and easy to put back in its holder.

The Designer Ruby Royale also comes with two USB ports. One allows you to connect the sewing machine directly to your computer (I know – that feature alone should have many husbands wanting to buy this sewing machine) or you can use an optional USB embroidery stick, an optional USB hub or optional mouse.

These features allow you to store your stitch files or embroidery designs on a USB stick or you can access the designs directly from your computer. 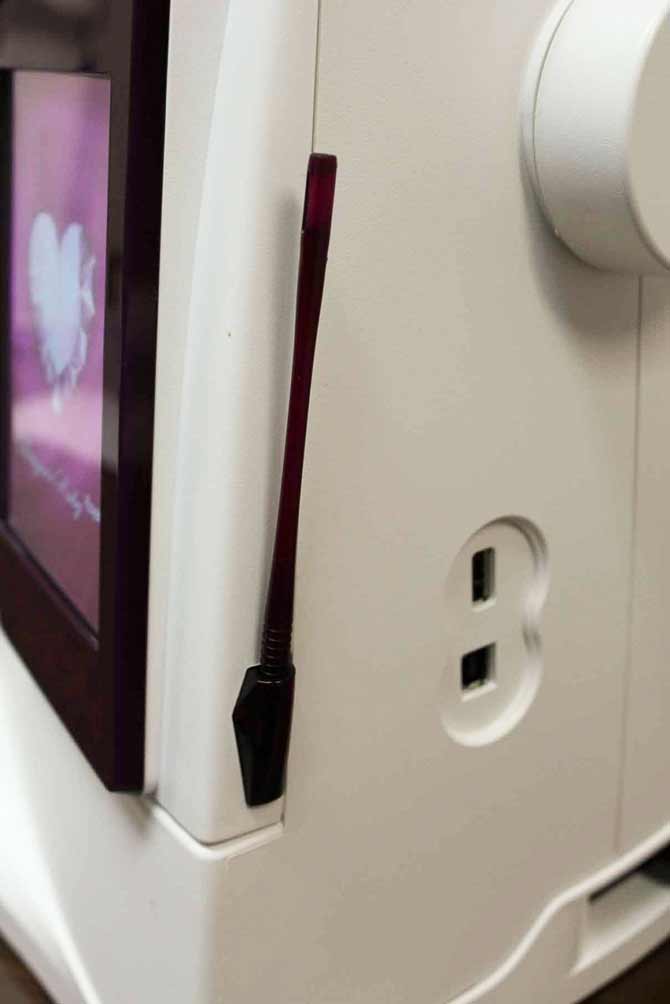 Look closely at the picture below. Do you see something missing? The last couple of sewing machines that I’ve reviewed have had all the stitches laid out in the pop-up lid of the sewing machine. Not so with the Designer Ruby Royale. Just a nice piece of ruby colored trim.

So, where are those stitches hidden? Well, they’re nicely tucked away in the menus on the large interactive screen. If you really need to see all the stitches laid out, all of them are displayed in the User’s Guide by category. I’ll explain that a bit more later this week.

One of my favorite features is the large interactive screen. This screen is huge and so nicely laid out. You’ll see more of that as the week progresses. Okay, I confess, as I said earlier, I just love the purple/green color combination as well.

I’ll walk through the various icons later in the week, but I wanted to show you where all those stitches are hiding. When you touch the Stitch Menu icon in the top left hand corner of the main screen, all of the Stitch Categories pop up. Using the stylus, it’s easy to scroll through all the menus to look for a particular stitch or you can choose the stitch category you want and look for the stitch that way. Either way, it’s very easy to find a particular stitch.

The Stitch Menu on the large interactive screen

Speaking of little details, did you know that there are three thread cutters on the Designer Ruby Royale to make some of the little tasks a lot easier?

There is a thread cutter beside the bobbin winder, one to the left of the needle and one in the bobbin case. Saves fumbling for those scissors! 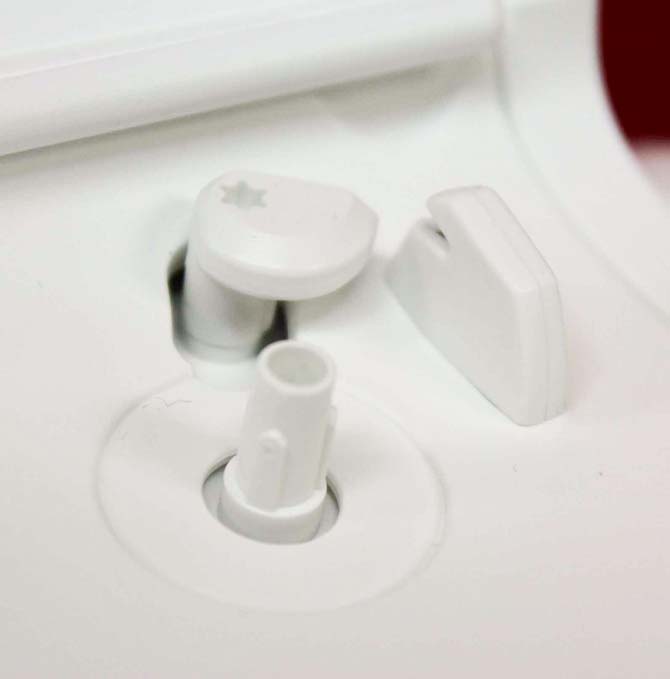 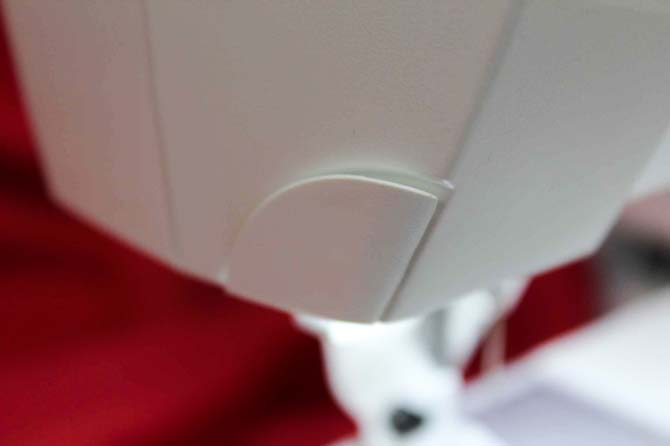 Thread cutter on the left side of the sewing machine allows you to cut top and bottom threads at the same time. 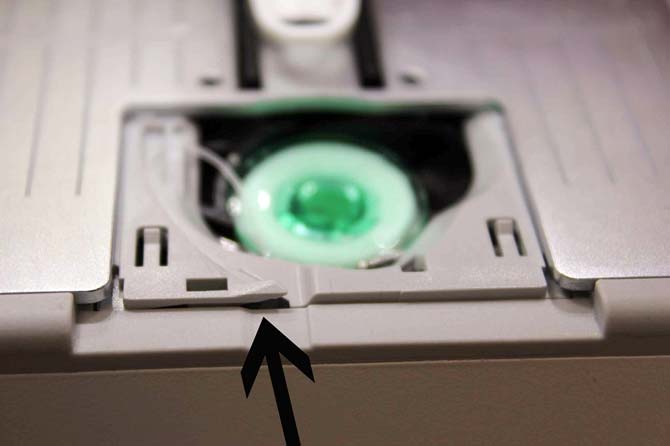 Thread cutter in the bobbin case.

Are you intrigued? Do you want to see more?

It’s been fun introducing the Husqvarna Viking Designer Ruby Royale sewing machine. Come back tomorrow and I’ll take you on a tour of that large interactive screen. Have a great day! Ciao!

Kicking the tires of the Designer Ruby Royale sewing machine

Machine embroidery in the hoop!

Top 10 reasons why I love the Husqvarna...

Is it wrong to LOVE a sewing machine?

The embroidered word and quilting

what is the average value of the Viking Ruby Royale? What would be a good price for a used Ruby?

I bought this extravagant machine for Christmas for myself. I love it! But i need tutorial video preferably on how to get the best out of it.

Great review – this looks like a great machine for me to consider when I need to upgrade!

Fantastic. Would love to trade in my Toyota sewing machine for this one!

Christina – there are so many features – I just want to sew day and night. Everything is so easy. Have a chat with your dealer. Good luck. Elaine

Chris – you got that right. Can’t wait to show you the embroidery stuff! Elaine