Quilting With The Pfaff Passport 2.0

Last month I left you with 3 of the 9 crazy patch blocks completed for a custom-designed chair cushion. Over the past 4 weeks I finished the other 6 blocks and turned those blocks into 3 panels with sashing. Now it’s time to do some quilting with the Pfaff Passport 2.0.

I decided to quilt this piece with the flip and stitch method of quilt as you go. 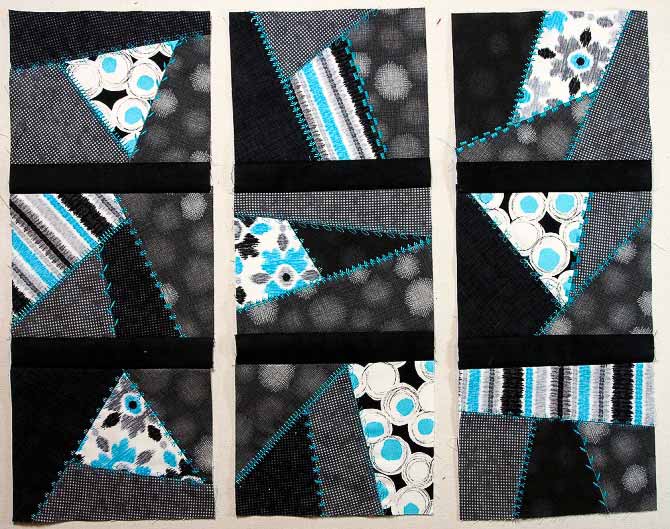 This isn’t the kind of chair cushion that I could just add a pre-made cushion to as it wouldn’t be the right shape or size. I decided that I would use 100% cotton batting and 4 layers of it. One would be too hard, 6 would be too soft but 4 would be just right. How did I know that 4 was the magic number of layers – I didn’t really. And I figured that would be about all I could get under the presser foot.

After cutting and layering my 4 layers of batting on top of the backing I pinned all the layers together with flower headed quilting pins as they are long and sharp. Normally I use curved safety pins to baste the layers together but I didn’t think they would be big enough to get through all of the layers. I could have used a spray baste such as 505 which probably would have worked much better than the pins but I didn’t and if I were to do it again I would use the spray baste. 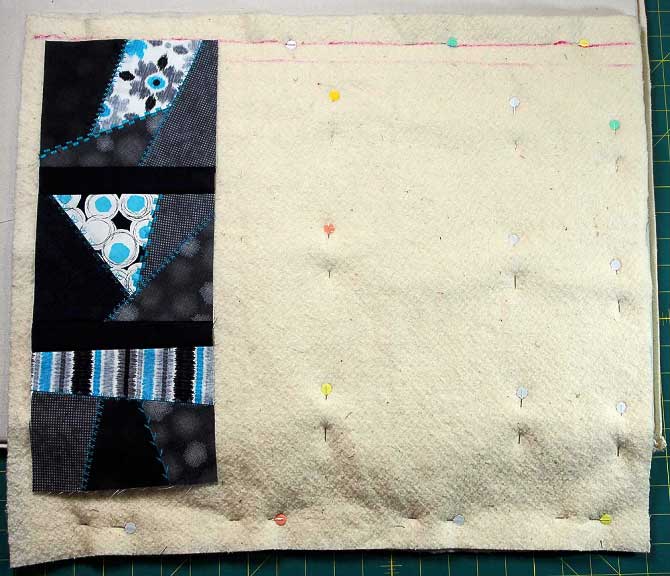 Layers of batting and backing pinned together

I drew a line across the top of the piece so that I would be able to line up my pieces and keep them relatively straight. I used the Trace’n Mark Air Erasable pen again from Clover. You can see the pink line at the top of the batting in the picture above.

Last month I used this marking pen to draw my lines on the fabric foundation and they didn’t take long to fade – just a few hours. I think the humidity had something to do with it as well as being exposed to the air. After retracing them I put the blocks in a ziplock bag to keep them away from the air. This worked perfectly, my lines were still very visible the next morning.

Getting ready for the first stitch and flip seam, a sashing strip was pinned through all the layers along the crazy patch panel.

Since I was going to be sewing through 6 layers of fabric I reduced the pressure on the presser foot to make it easier for the feed dogs to move the bulky piece through and I also lowered the tension on my thread. I definitely had the IDT system engaged for this project to help move all those layers along. 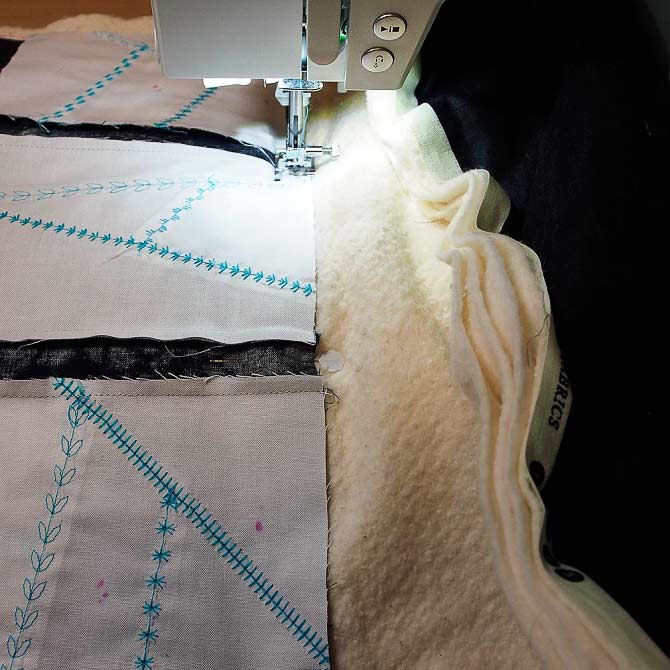 Sewing through the layers

Both of these procedures made a huge difference to my quilting lines. The layers did get pulled in tight but not as much as they would have if I had left the tension at normal. The stitching would have been very tight as the top and bottom threads would have been having quite the tug of war with each other. 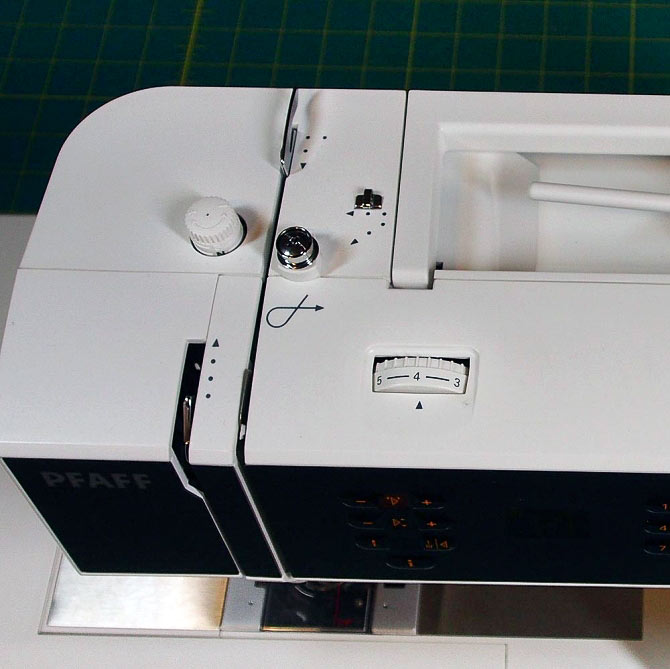 The stitching from the flip and stitch probably would have been enough quilting for this piece but I thought that the black sashing needed just a bit more color. I decided to add in some straight quilting lines in the same color of thread as the decorative stitching. Increasing the stitch length to 3.0 I set out to quilt the piece. I wanted the lines to be a ¼″ from the edge of the sashing on each side. I used the 1A foot for this and lined up the inner edge of the foot with the seam. 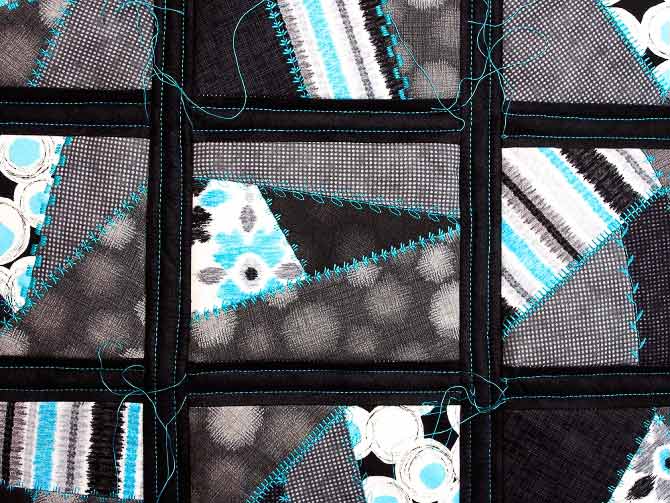 Close up of quilting with thread ends still loose

I did try stitch in the ditch but that was a dismal failure as it was very hard to stay in the ditch with all the bulk of the layers. I thought I had done a super job and then when I took a look I had wandered out of the ditch many times and with the turquoise thread it really stood out.

Pulling the Threads Through

I could have used the tie off mode but I thought with all the layers I had here I would just leave the ends and get rid of them at the end. To get rid of these unwanted threads I use a self threading needle to pull the ends to the back, tie a knot and then bury the ends under the backing. My favorite self-threading needles are the gold headed ones from Clover. I find that they rarely split the thread and are finished with a smooth edge where the thread slips in.

Bias binding is in order for this project since the piece has been cut to the shape of the chair with rounded sides and edges. A much wider strip for the binding is needed rather than the usual 2 ¼″ strip as it isn’t going to fold over to the back with those 4 layers of batting. I ended up using a 5″ bias strip. 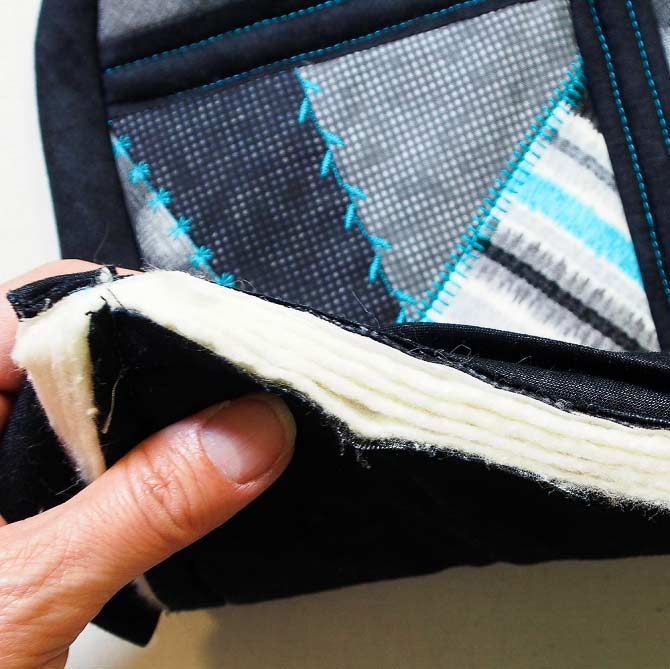 Thickness of cushion that binding needs to wrap around

Putting the settings back to the same as I had when quilting, I sewed the binding into place on the top using a ⅝″ seam allowance. After pressing it to the back I wish I had the jumbo Wonder Clips to keep it in place but unfortunately, I only have the small ones in my tool box. Hand sewing complete, the wider binding looks great as it blends right in with the sashing.

I wish I could show you a picture of the cushion on the chair but I’m afraid that the chair and cushion are separated by 2550km at the moment! 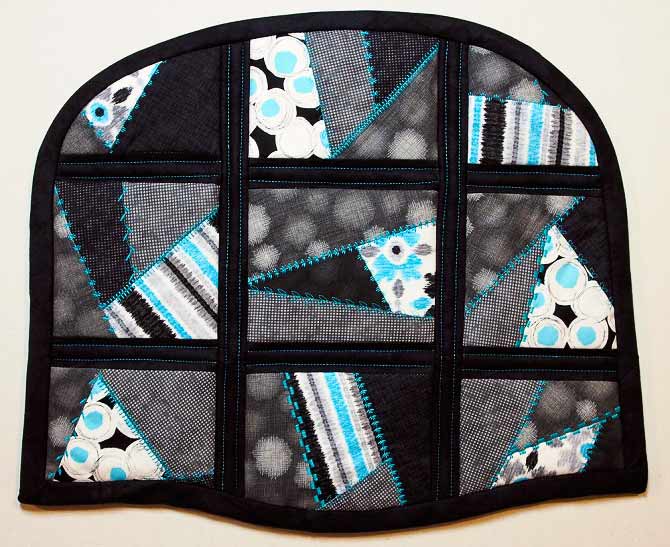 The machine certainly handled the multiple layers of fabric on this project very well making quilting with the Pfaff Passport 2.0 easy and enjoyable so I’m sure that using just a single layer of batting for another project later this week will be a piece of cake.

Sewing: Getting a Handle on the Market Tote

Sewing On A Button – Part 1

How To Sew A Zipper

Sewing On A Button – Part 2

Sewing On A Button – Part 1

Decorative Stitches On The Pfaff Passport 2.0

Satin Stitch with the Pfaff Passport 2.0

Applique Stitches On The Pfaff Passport 2.0

Sewing With The Pfaff Passport 2.0

Hi Jennifer, can I freemotion quilt on my Pfaff Passport 2? Which foot do I use, can I use the 6D (from my Creative 3) or the darning foot that came with my Pfaff 1473CD?

Hi Bernice! Great question. You can free-motion quilt on the PFAFF passport 2.0 using the Open Toe Free Motion foot (part # 820988096). The passport is part of machine group K and the 6D foot is not compatible with the K group machines. For instructions on setup please see our Accessory User’s Guide (http://www.e-magin.se/latestpaper/jj61b7rh/paper#/paper/sd9q933n/64). Thank you for visiting QUILTsocial!

Applique Stitches On The Pfaff Passport 2.0

Decorative Stitches On The Pfaff Passport 2.0

Sewing On A Button – Part 2