It’s the end of the week. ACK! I’ve got so much more to explore in the PREMIER+ ECQ software. If you’ve been following along this week, you’ve seen some of the amazing things that you can design and create.  Yesterday, I showed some of the ways the files can be exported.

The PREMIER+ ECQ software packs a huge punch, not just for embroidery files, but different formats as well including computerized quilting machines and digital cutters. I’m using the Husqvarna Viking Designer EPIC 2 to stitch out my files, but ECQ will save the embroidery files to other brands.

I can create drawings from scratch, use the built-in designs and shapes as a starter or trace the design from an existing source.

It’s super exciting and I can’t wait to show you what else I created. 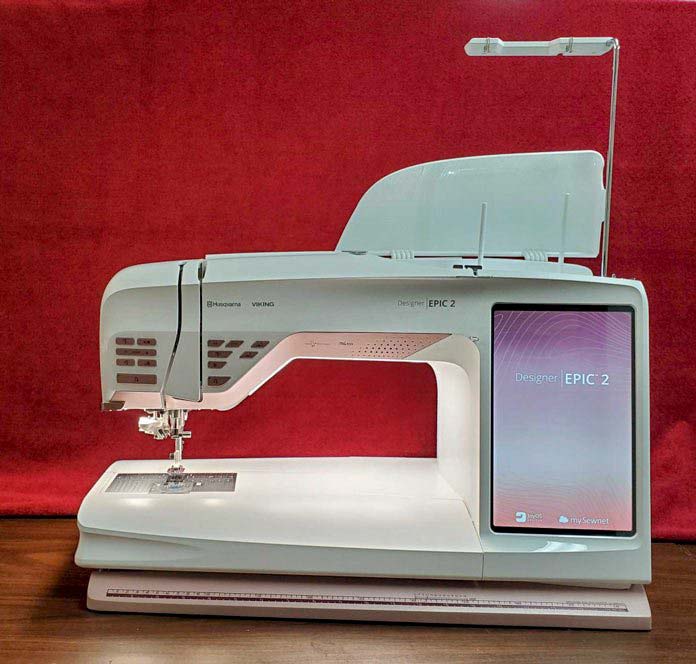 Earlier this week, I used the ECQ software to trace the outline of an ice cream cone I had found in a children’s coloring book. 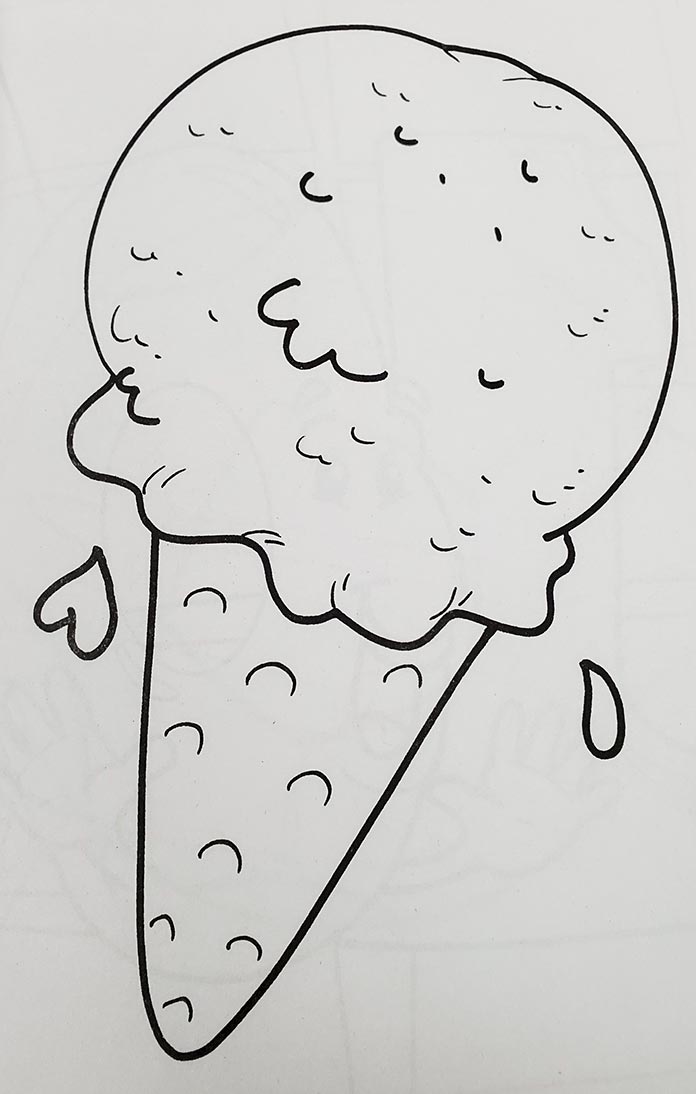 A photograph of the ice cream cone from the coloring book 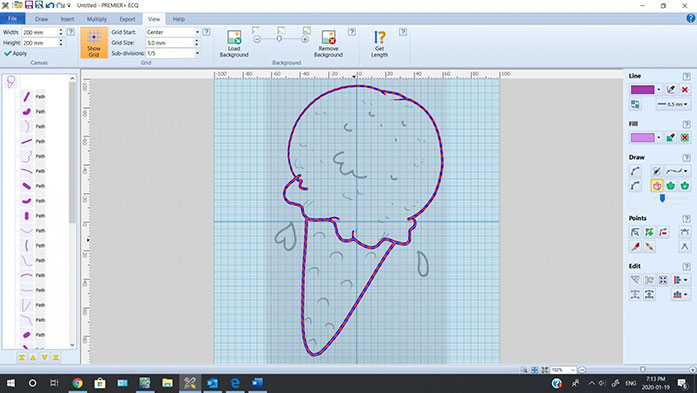 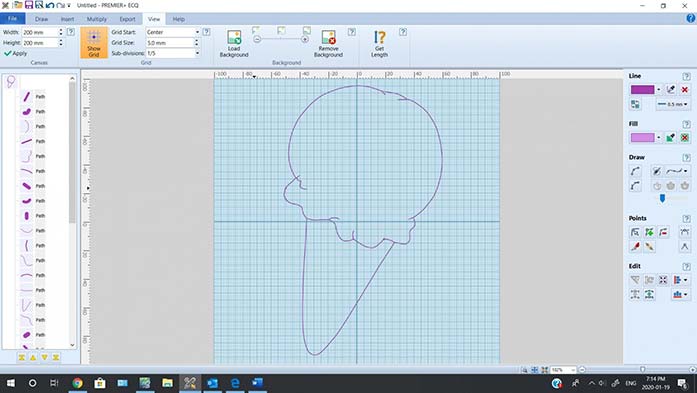 But this isn’t what I wanted, so I traced the image of the ice cream cone again and this time I used the Trace Area option so I would get a shape, instead of a line.

However, this is a super easy fix. 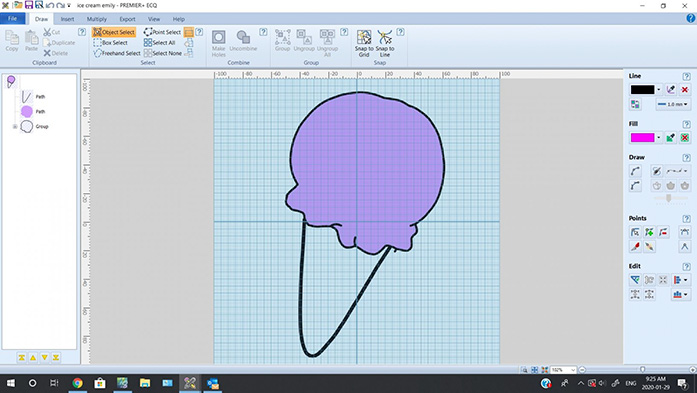 This is where the Bezier Draw tool comes in very handy. Remember, I’m not comfortable with the drawing process, but I can point and click. So I did exactly that – I pointed and clicked around the outline of the cone and across the bottom of the scoop to make a complete shape. In the photo below, I haven’t completed the exercise yet so that’s why there’s no fill in the cone.

Each of the white dots represents a click using the drawing tablet or mouse. 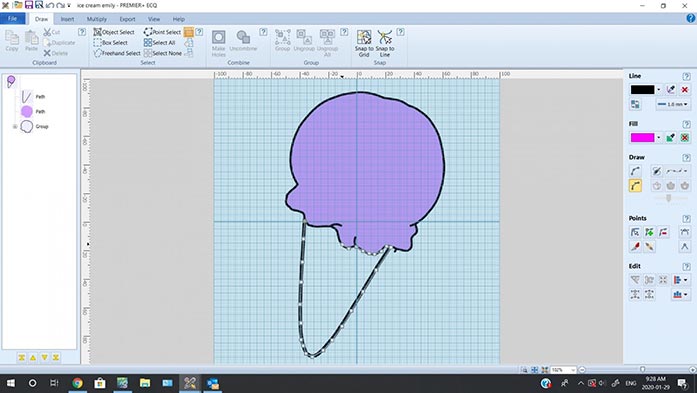 I now have two complete shapes each filled with color. You can see the two shapes in the film strip on the left in the photo below. 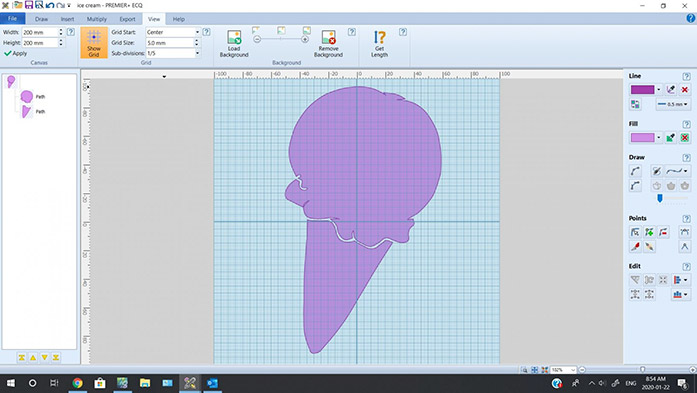 Two shapes that make up the ice cream cone

When I previewed the design in Embroidery with Fill, I got the two shapes with satin stitching around all edges. I did not want that as it would make it too bulky over that section. 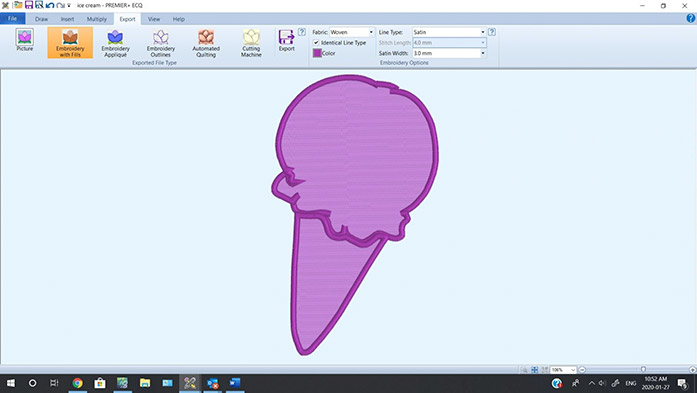 A preview of the Embroidery with Fill

There is so much flexibility in the PREMIER+ ECQ software. I can pretty much do anything I want. I love it. 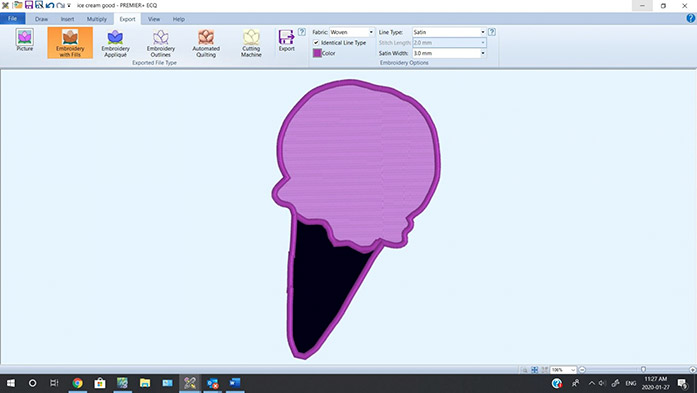 There are days when things work and there are days when – well things don’t go so well. I did this exercise over several days and I was trying to perfect the design. I should have left well enough alone. When I went to stitch out the design, I had accidentally removed the fill from the cone and when it stitched out, I got only the fill for the scoop. Totally my fault and that happened because of one mouse click!

There’s always a moral to these learning experiences – you should check before you stitch. But in reality, the design looks just fine the way it is. It just goes to show you can have many options. You don’t have to have an embroidery fill in every section of the design. 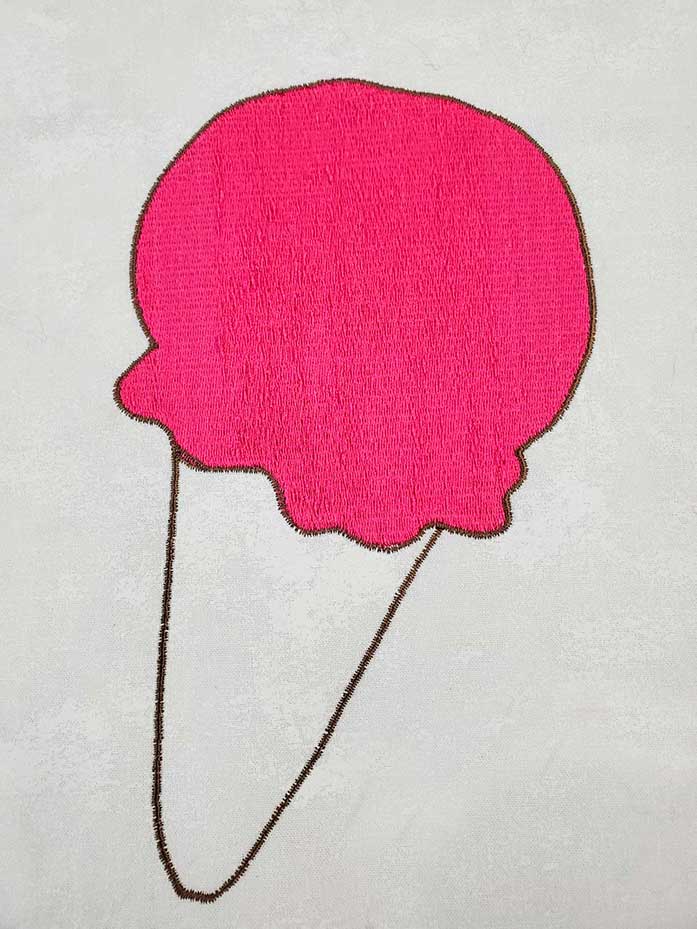 The next file I stitched out was the Embroidery Applique. This time, I chose to use the Precut Piece option, instead of Tack and Trim. That meant I had to get my digital cutter working. Remember, I’m brand new to this piece of equipment so I was a little worried.

I started by cutting a piece of brown fabric for the cone. I ironed fusible to the wrong side of the fabric. Then I removed the paper backing from the fusible and stuck the fabric with the fusible side down directly onto the sticky cutting mat that comes with the digital cutter. 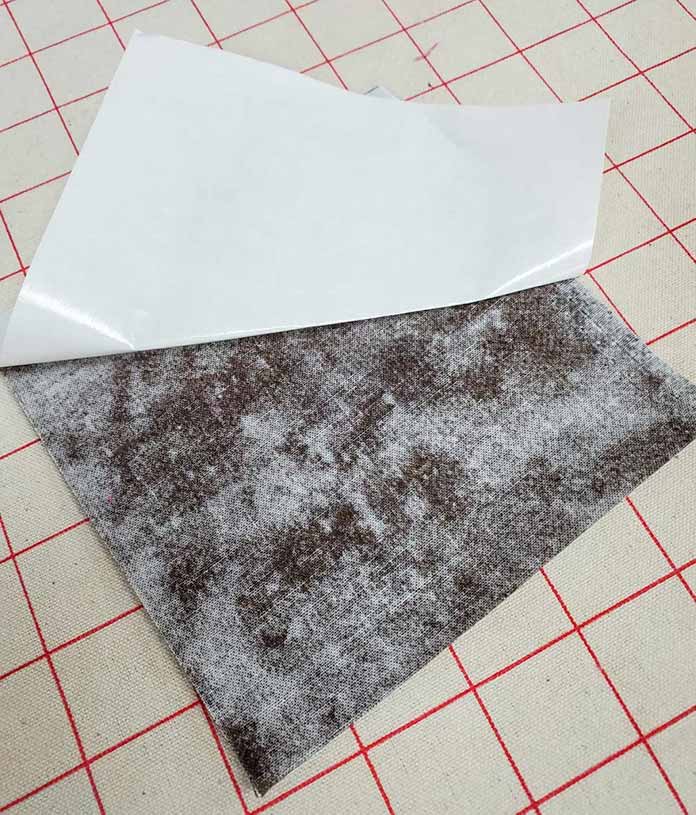 You’ll have to excuse my messy cutting mat. It’s brand new and yet I managed to make a total mess of it! It’s all a learning curve. It doesn’t matter – I got the machine to work and I now know how to clean the mat.

I loaded the mat into the cutter.

Sorry – the fabric in the previous photos is for the cone and the next photos are with the fabric for the scoop of ice cream. I forgot to take pictures of the same fabric as it went through the various stages. I did mention I was having a challenging day when I did this! 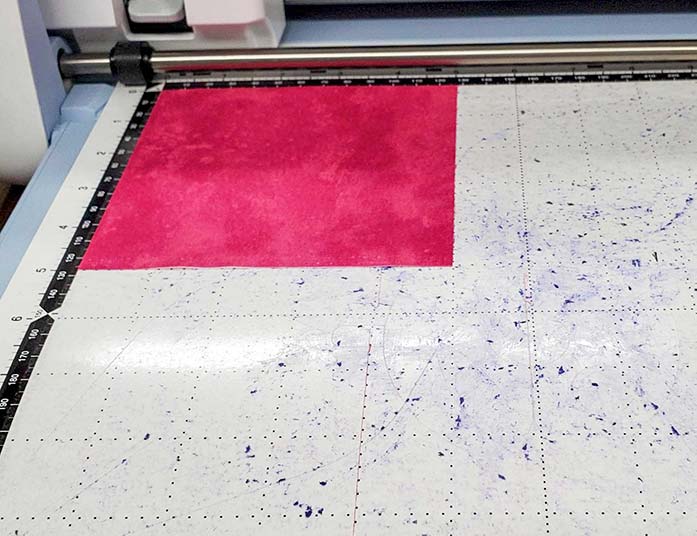 Once it was finished cutting, I was able to remove the excess fabric and there was my precut scoop of ice cream. How exciting is that? For someone who has never used a digital cutter before, I was ecstatic! My mind is racing with possibilities for all kinds of embroidery applique I can create. 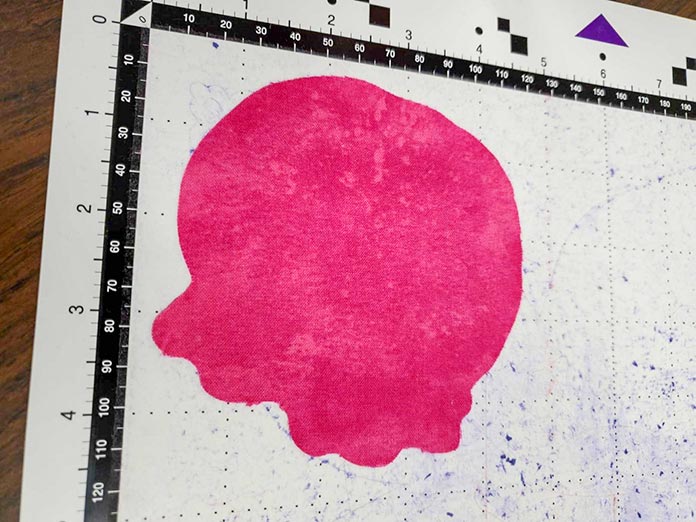 Then instead of placing two fabrics on the mat like I did the previous day with the ladybug, I deleted one of the images on the screen of the digital cutter. So when I cut the scoop of ice cream, I deleted the cone. I then moved the scoop of ice cream into the top left corner of the screen to correspond where the fabric was placed on the cutting mat. For those of you with digital cutters, I’m sure there are more precise ways of making this happen. I found a quick workaround. I’m happy with that.

Once the first piece had been cut, I reloaded the file without saving. This time I deleted the scoop of ice cream and cut the cone. It worked for me! 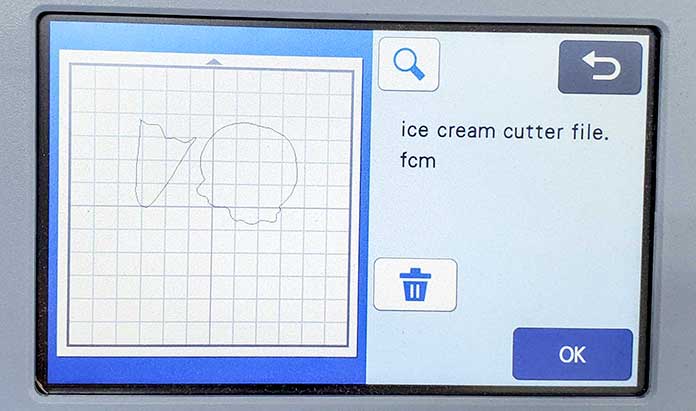 The files are loaded into the digital cutter

Now I’ve my two applique shapes prepared for the embroidery applique, I loaded the Embroidery Applique file into the Husqvarna Viking Designer EPIC 2. Remember – all these file formats are being created in PREMIER+ ECQ!

When it was time to place the two applique shapes, a Stop command had been inserted into the digitized embroidery design. I did not insert the Stop command – it was generated by the ECQ software. Even someone as technologically challenged as I can make this work. 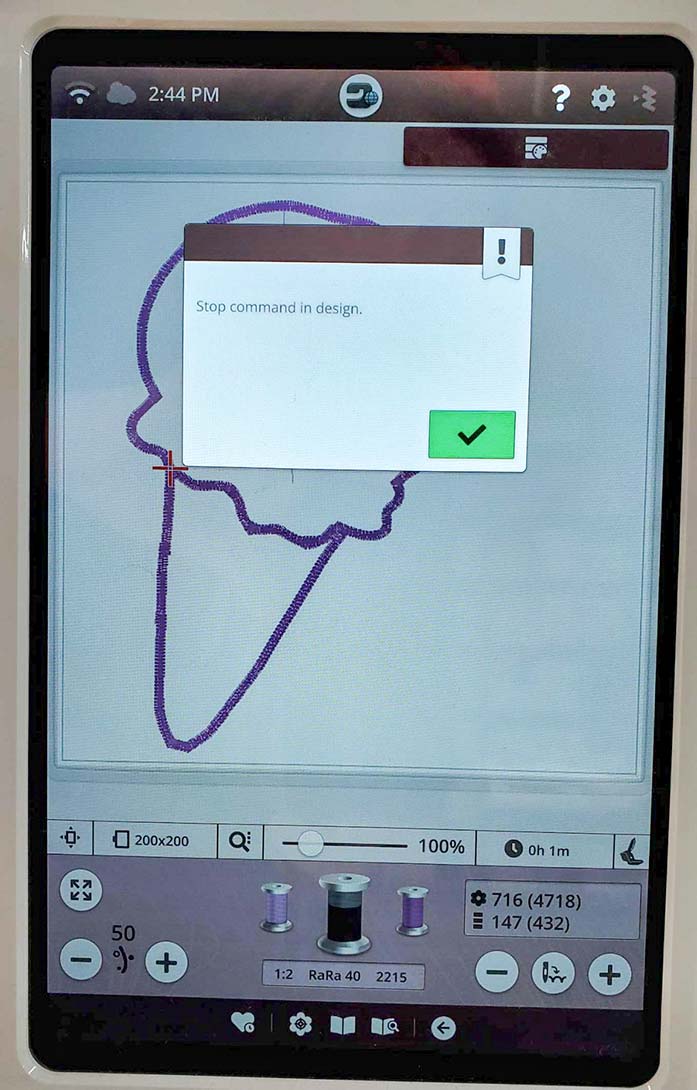 A STOP command has been programmed into the embroidery file

It was easy to position the shape inside the placement lines.

I then removed the hoop from the Husqvarna Viking Designer EPIC 2 so I could fuse the shape in place. 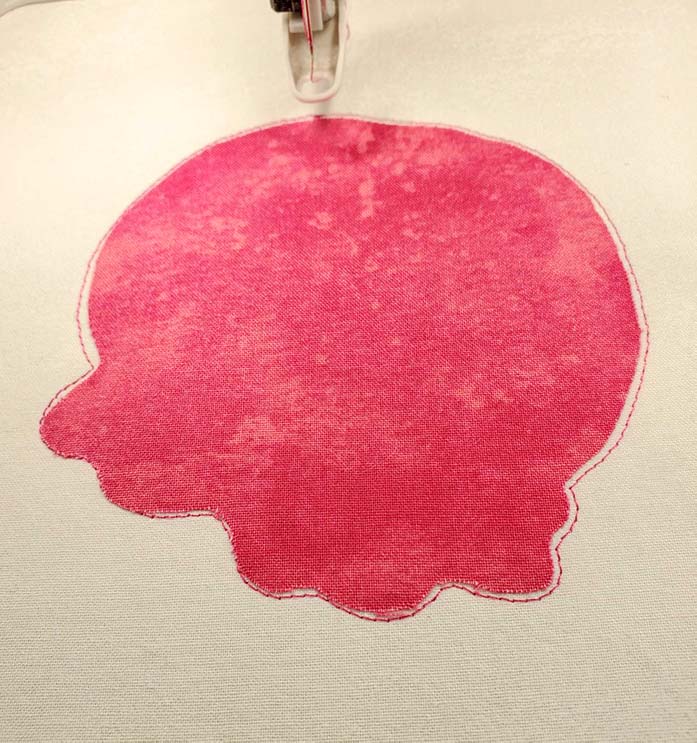 Then I restarted the embroidery stitch out process and got the positioning lines for the cone.

That shape was also fused in place. 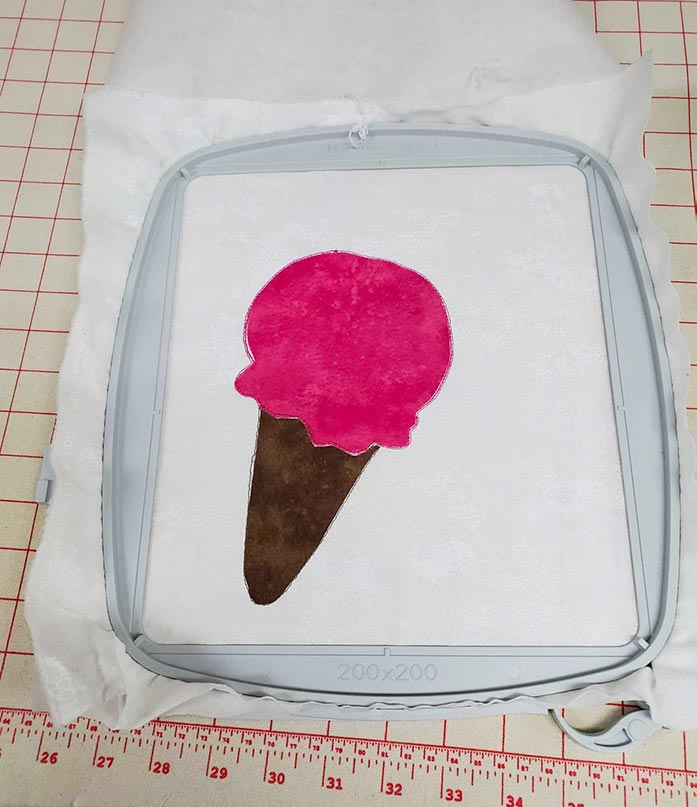 Both of the precut shapes are now fused in place

Sometimes, prepping to write these posts is a hoot and there are lots of things happening behind the scenes. Let’s just say I’ve learned a lot. I like to share my mishaps because I think they make good learning experiences. If I weren’t making mistakes, I wouldn’t be learning a darn thing.

My goal was to stitch all three embroidery formats of the ice cream cone in the Imperial hoop (260mm x 360mm) as I had done for the ladybugs, the previous day.

I stitched out the placement lines for the scoop of ice cream, however, when I went to position the applique shape, I remembered I had mirrored this particular design so it would fit in the hoop. However, I didn’t mirror the applique shape when I used the digital cutter. 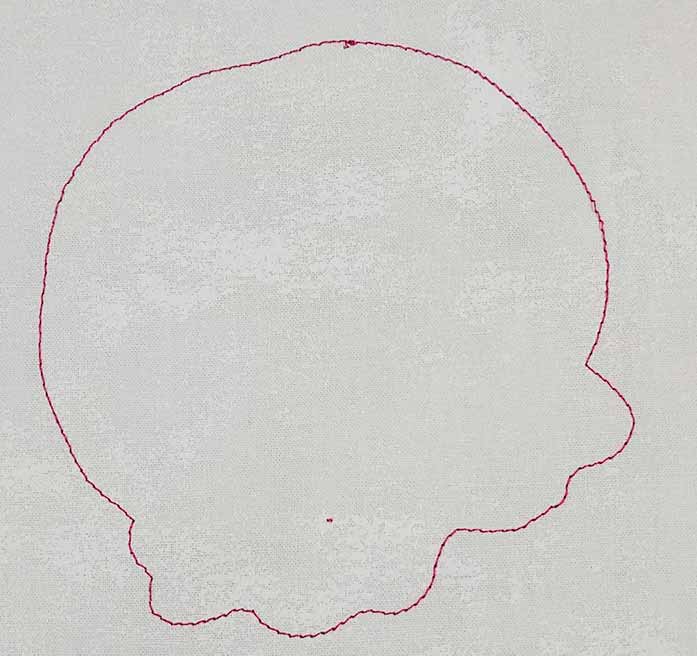 Seriously? Well, I wasn’t cutting another scoop of ice cream in the mirrored orientation so I just rehooped a new piece of fabric and started over. This time, I did not mirror the embroidery design. 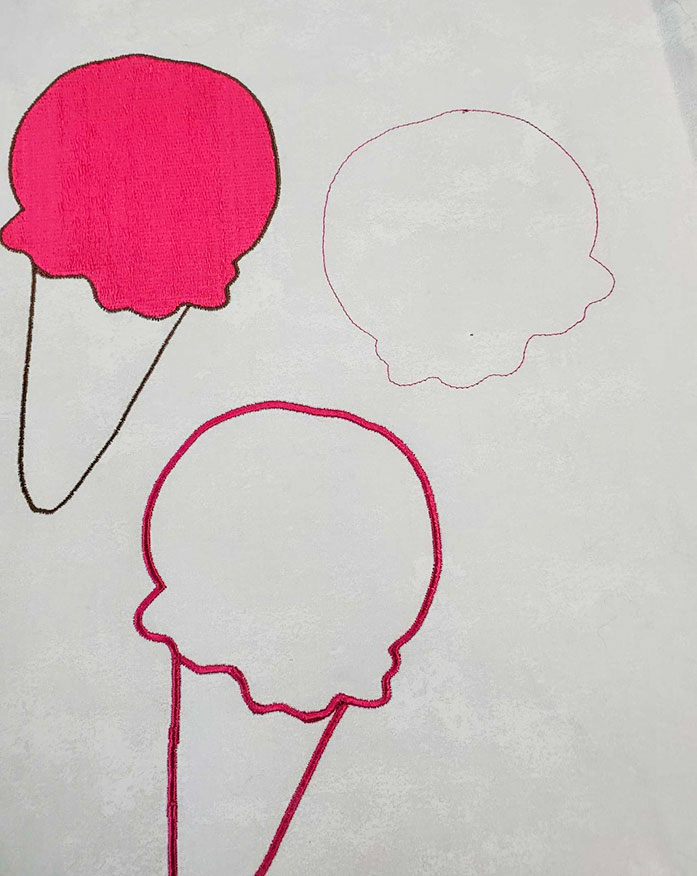 Here’s my final stitch out of the ice cream cone in the embroidery applique format.

Another quick note, in case you’re very observant. You can see a slight variation in the line of stitching on the left side of the ice cream cone. Why is it like that? Oh, that was my fault. I was trying to perfect the line in one of my design files and I goofed. So the PREMIER+ ECQ software digitized exactly what I did and added in some extra stitches. The lesson here – don’t mess around with stuff. The rest of the lines came out beautifully so while the software is good – it only does what it’s told. 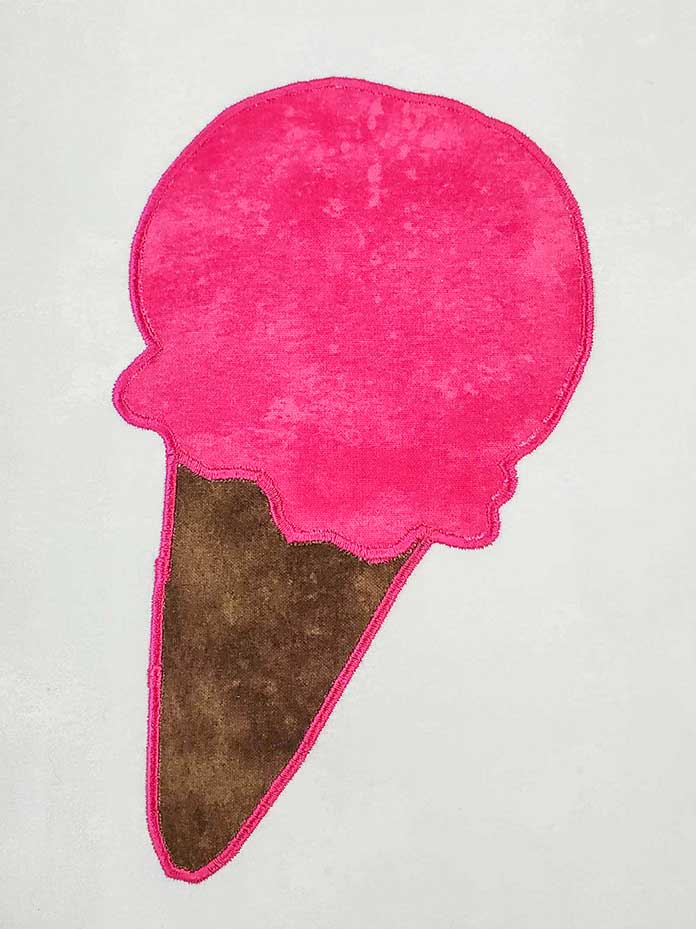 The embroidery applique version of the ice cream cone

I also stitched out the Embroidery Outline format of the ice cream cone. Again, I got those same weird lines on the left-hand side. My fault! ACK – I’m going back and see if I can clean those up! 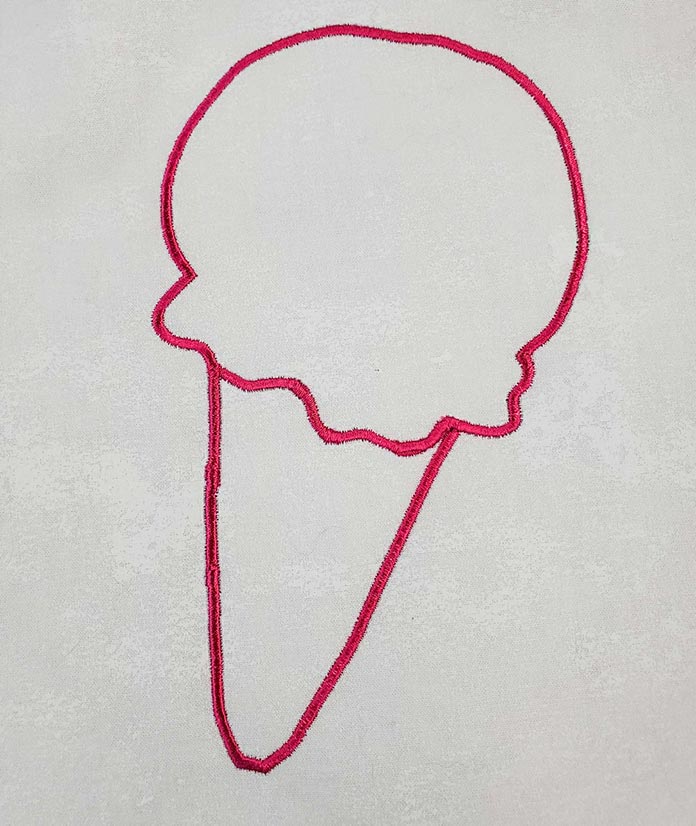 I can’t begin to tell you how exciting it was when I had finished stitching all the files. I even cut the applique shapes out from cardstock and glued them to a piece of cream cardstock.

I’m so impressed at how easy it was to take the image from the coloring book and create all these different versions of the ice cream cone.

The best part? I’m just scratching the surface of what can be done and I can’t wait to learn more about the amazing things I can do with the PREMIER+ ECQ software. 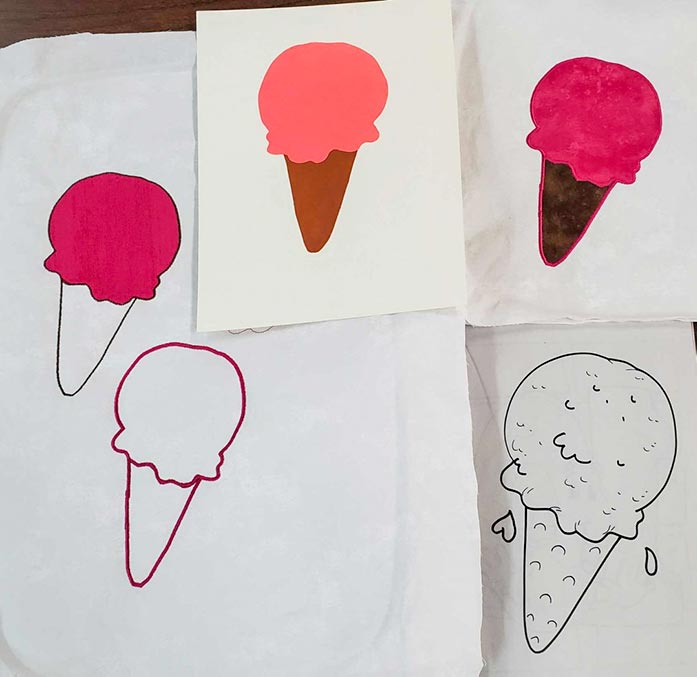 Different output formats of the ice cream cone generated in the PREMIER+ ECQ software, along with the original from a children’s coloring book

And there you have it – a truly amazing week with the PREMIER+ ECQ software. It’s easy to learn, it’s easy to access the online help files if you need more information. ECQ can create numerous file formats with lots of options for each format.

I’m truly amazed at the output I was able to produce. There’s so much more I want to play with. I can’t wait to go back and spend more time with more designs and see what new creations I can come up with.

Thanks for following along this week. I hope you learned some things and hopefully, you’ll be inspired to check out the PREMIER+ ECQ software. I used the Husqvarna Viking Designer EPIC 2 to do my embroidery stitch-outs, but remember this software can export files in other brand formats as well.

It’s truly worth taking a good hard look at.

This is part 5 of 5 in this series.
Go back to part 4: File export possibilities in PREMIER+ ECQ

How to make a box of chocolates… with fabric!

The reason for using metal hoops with your...

Getting creative with the ribbon embroidery attachment: EPIC...

Pushing the envelope: machine embroidery to QUILT a...

The anatomy of a machine embroidery hoop

5 key tips for learning about the Designer...

Tips for learning from the JoyOS Advisor

The anatomy of a machine embroidery hoop