THE tool you need for fast and easy chain piecing

Which tools will I use? I’ll rely on Clover Chaco Liners and Clover Quilting Pins – 48mm (17⁄8″) to mark and pin my fabrics. And I’ll also use a Clover Thread Cutter Pendant to cut the linking threads from chain pieced units. 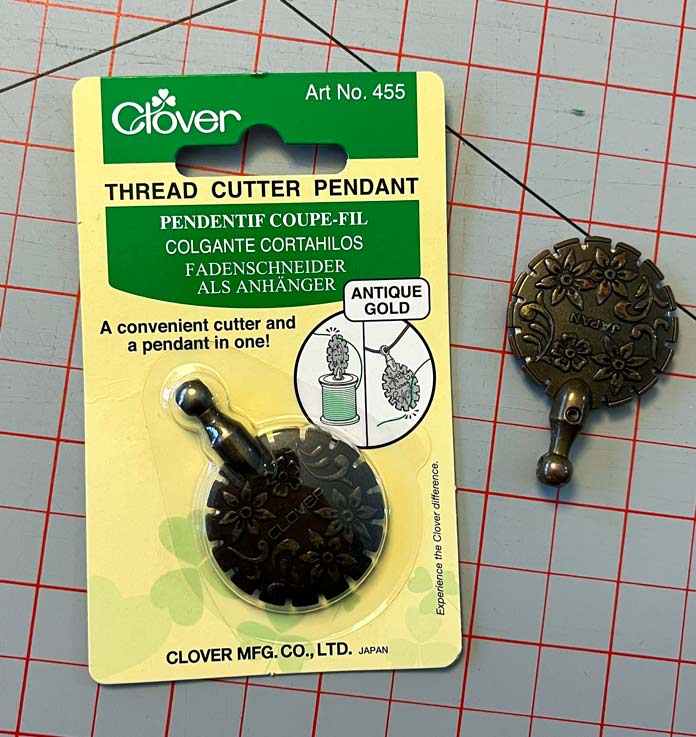 On Monday, I explained that to make a finished HST measuring 3” x 3”, you need to add ⅞” to the total size when cutting the fabric squares to achieve the desired finished size. In other words, the squares need to be cut to measure 3⅞” x 3⅞”.

To make a QST measuring 3” x 3” when finished, 1¼” must be added to the total size when cutting the squares. Therefore, cut fabric squares to measure 4¼” x 4¼”.

To construct this Marvel Avengers Kids in Action quilt top, 80 QSTs are needed. Therefore, I’ll cut (40) 4¼” x 4¼” squares from each of the yellow and green fabrics. Remember, two QSTs are made from each pair of fabric squares.

Cut out squares and, with right sides together, pair each yellow fabric square with a green one. Draw two diagonal lines on the wrong side of one of the fabrics in each pair. 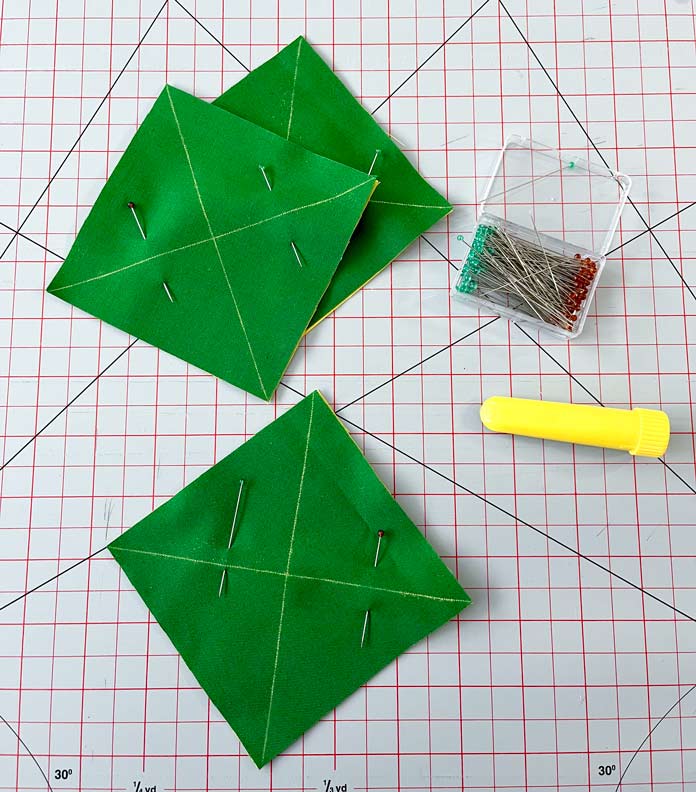 Draw two diagonal lines on the wrong side of one of the fabrics in each pair.

After marking, pin the pairs together so they don’t shift.

Sew a partial ¼” seam to one side of a diagonal line. Stop sewing when the other diagonal line is reached. Raise the needle and presser foot and shift the fabric and complete the seam ¼” to the opposite side of the same diagonal line. 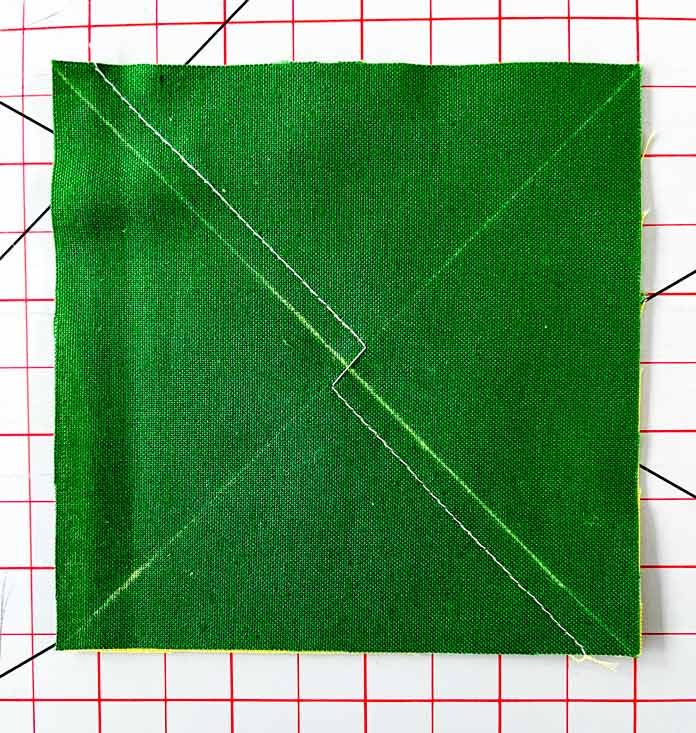 Repeat the same seaming technique on the intersecting diagonal line on each set of paired squares.

Note: If QSTs are made from three or four fabrics, it’s very important to be consistent and always sew the seams in the same manner. If the first seam is sewn to the right of the diagonal line, all first seams need to be sewn to the right. 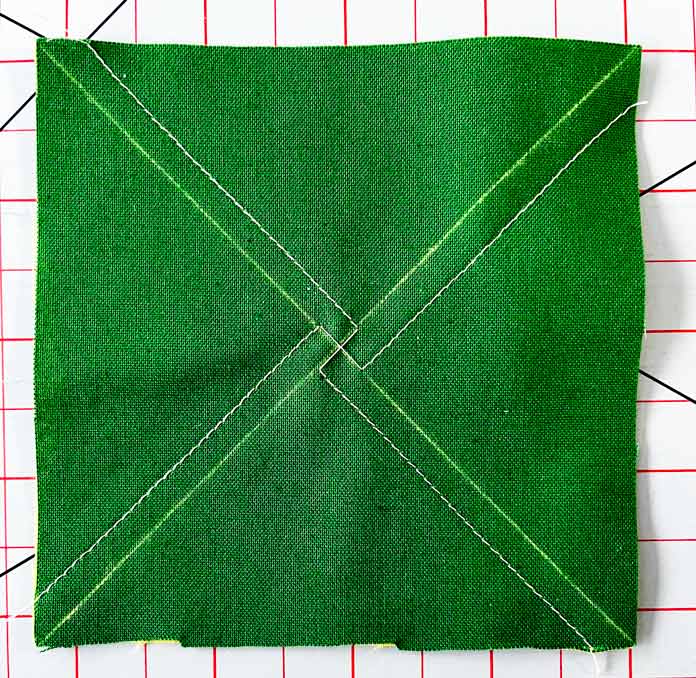 Sew the second ¼” seam along the other diagonal in the same manner as the first.

For efficiency, my habit is to chain piece when I sew multiple units. When chain piecing five units or less, I don’t mind using scissors to separate them after sewing. When I sew a longer chain of several units, would much rather use the Clover Thread Cutter Pendant!

I was introduced to this handy gadget a few years ago at a quilting retreat. I noticed another attendee was using the pendant and I fell in love with it. As the name says, it’s a pendant and can be worn around the neck. However, I prefer to set mine in a small block of wood. A spool of thread can also serve as a handle for the thread cutter. 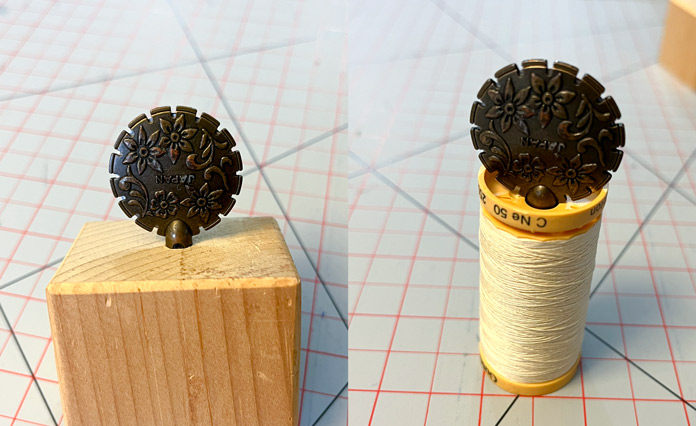 Set the pendant peg into a block of wood or a spool of thread to create a handle for easier use.

To use, simply push the thread down across the pendant. The thread finds its way into the grooves and the recessed blade cuts the thread. 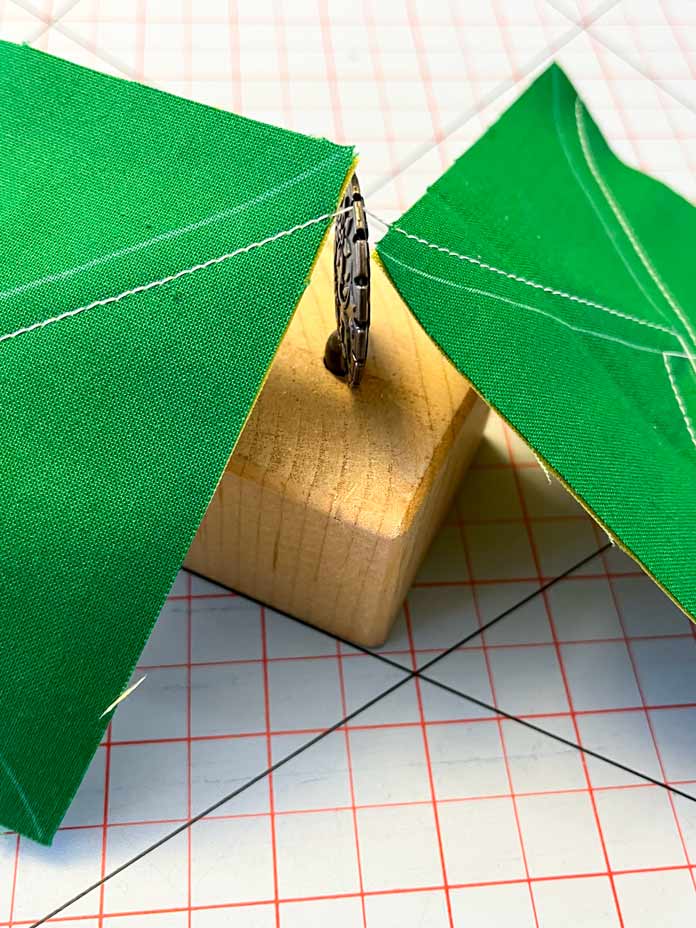 Use the Clover Thread Cutting pendant to cut threads when chain piecing to separate the linked pieces after sewing.

After cutting the chain-pieced squares apart, cut the sewn squares into four separate pieces along their marked diagonal lines. 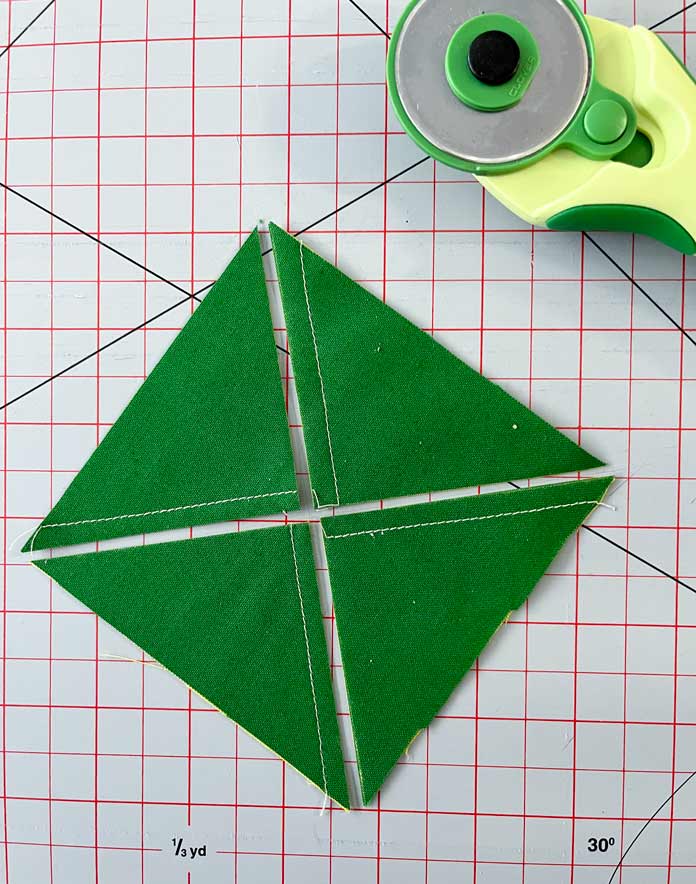 Cut along both marked diagonal lines to separate each paired square into four triangles.

Press of each of the four triangular sections open with all the seams pressed to the same side. 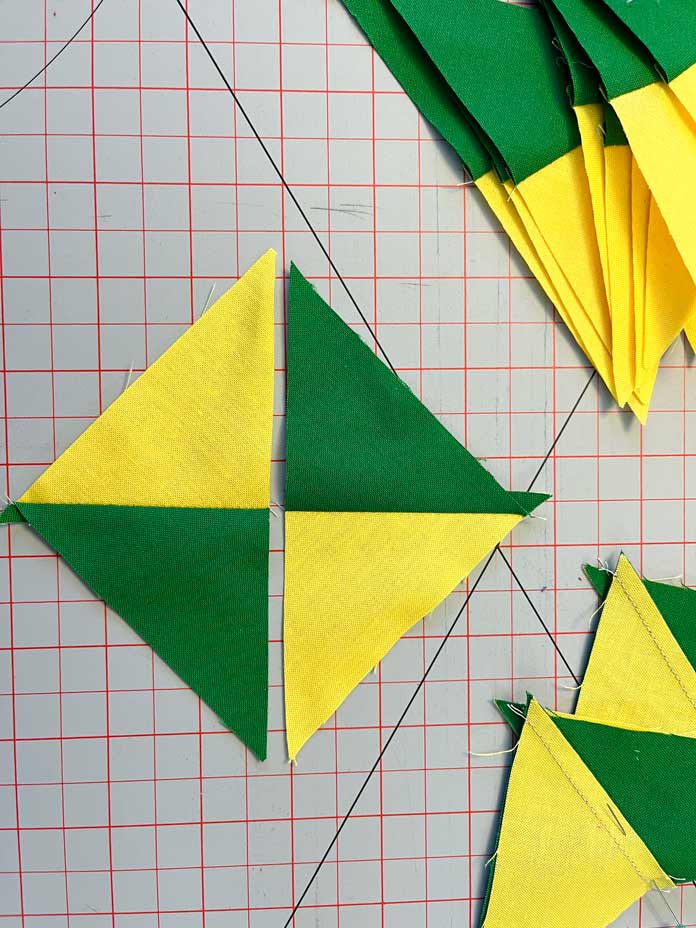 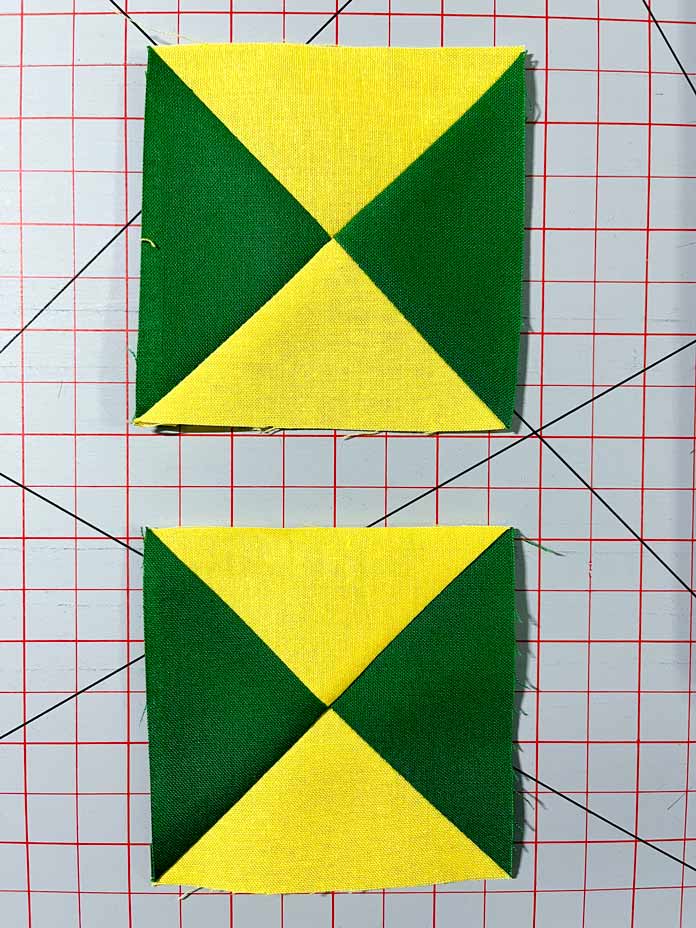 Sew two sections together to create a QST.

QSTs are easy to make and can add interest to any quilt. Using the Clover Thread Cutter Pendant after chain piecing makes QST construction fast and fun. A pendant is a good timesaving investment.

I hope you’ll join me tomorrow to assemble the blocks and the quilt top. You’ll be amazed at how quickly this quilt comes together!

Go back to part 3: Make multiple Half Square Triangles from fat quarters? Absolutely!

The secret to perfect alignment on a 6-point...

16-patch diamonds are easy with the ESSENTIAL Sew...

Easy 6-point stars without Y seams: What you...

Measure, Cut, Trim! How to frame a fabric...

The right tools make a memory quilt a...

How to decorate chocolates… with quilting stitches!

Pinwheel blocks made easy with the Sew...