Welcome back! What do you think? Are there any of those top ten features of the Husqvarna Viking Designer EPIC 2 that’ll make life easier for you?

While quilting and sewing is our hobby, it seems like everything else these days, we want to be able to do things faster so we can move onto the next project. Trust me, many of the 10 epic features I mentioned yesterday will get your projects done much faster.

I’m exploring the Laser Sewing Guidance today and showing how it changed my life as a quilter. I hope I can go on reviewing the Designer EPIC 2 forever – I don’t want to give it back! 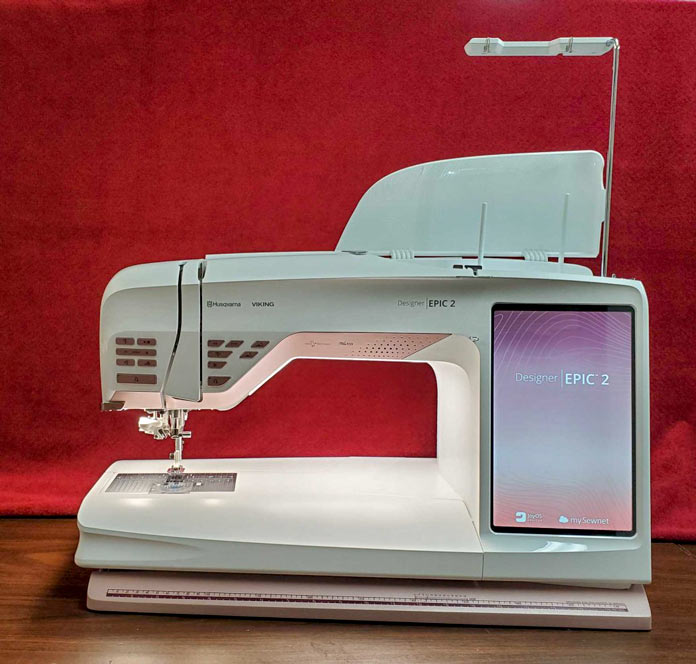 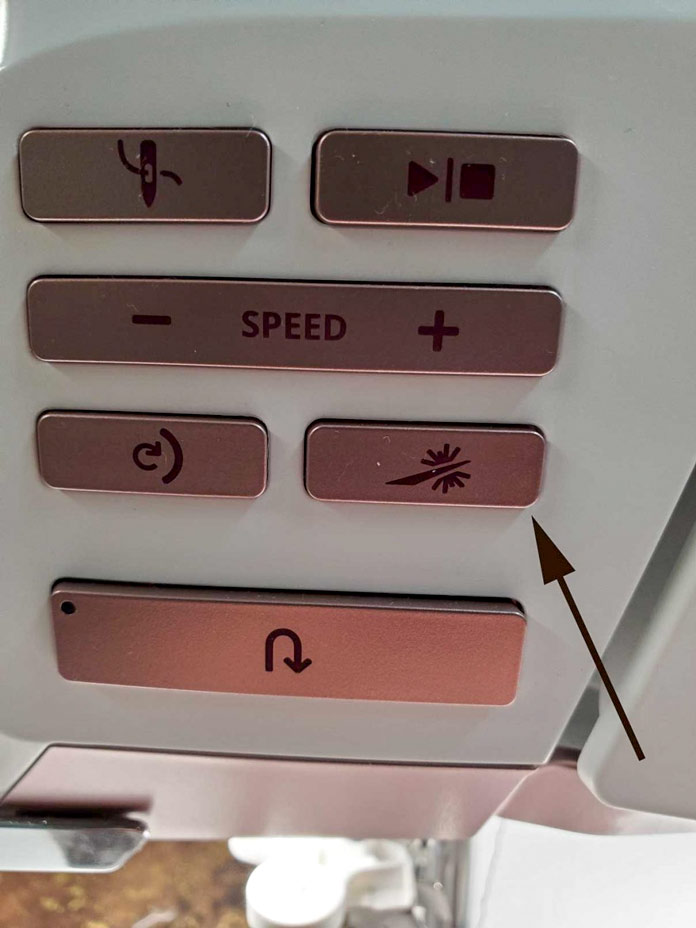 Laser Sewing Guidance at the touch of a button

As easy as that, I have a laser beam – a real laser, versus a projected ray of light, that appears on my work surface. 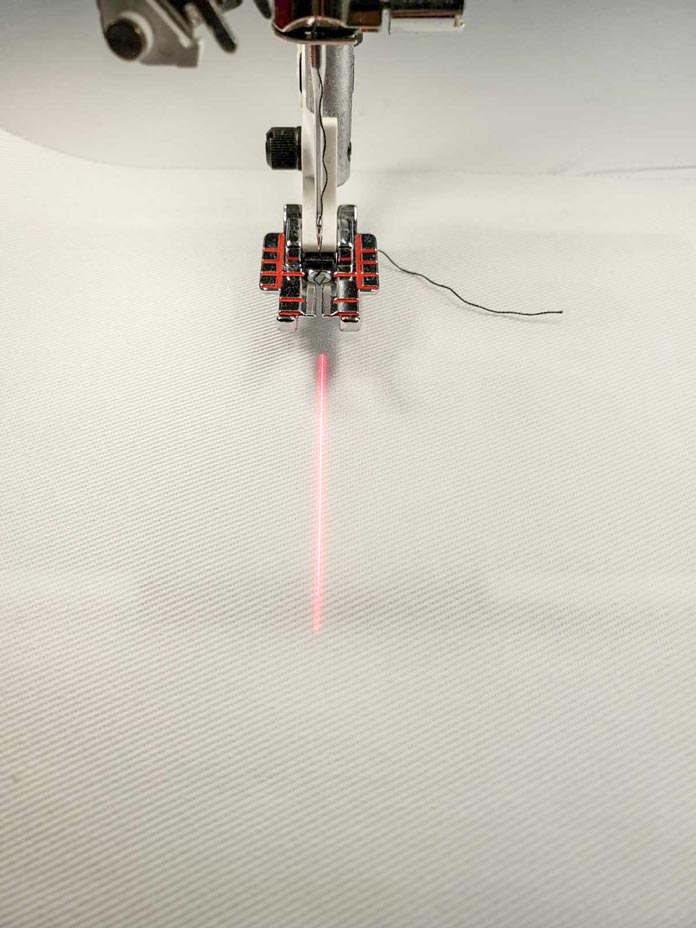 Naturally, the curious part of me wanted to see how the Laser Sewing Guidance would show up on various colors of fabric. I tried white as you can see above. I tried black. Works amazing on both light and dark fabric. 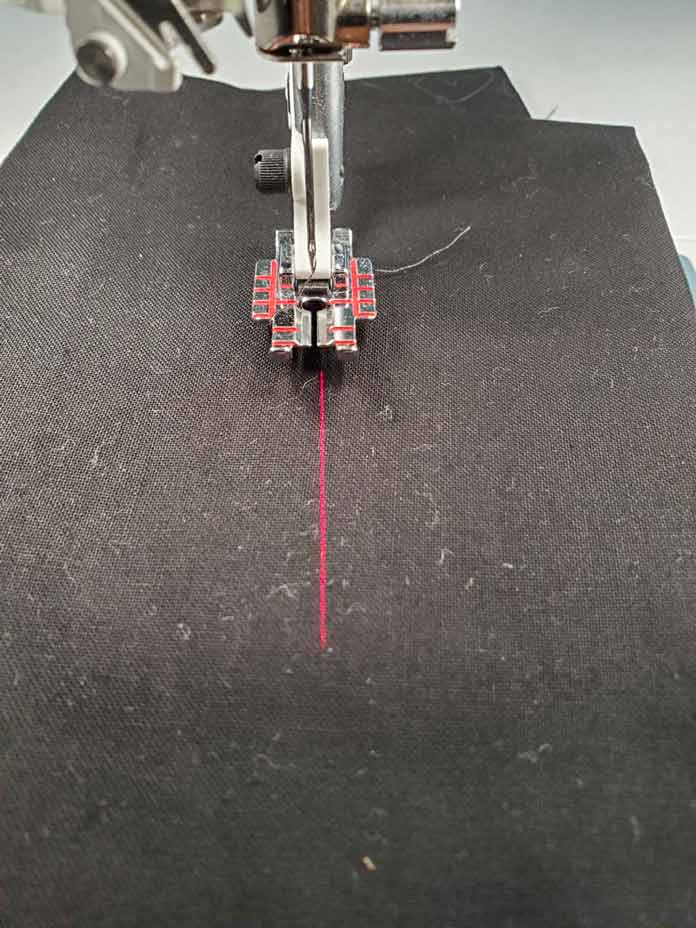 The Laser Sewing Guidance shows up on black fabric 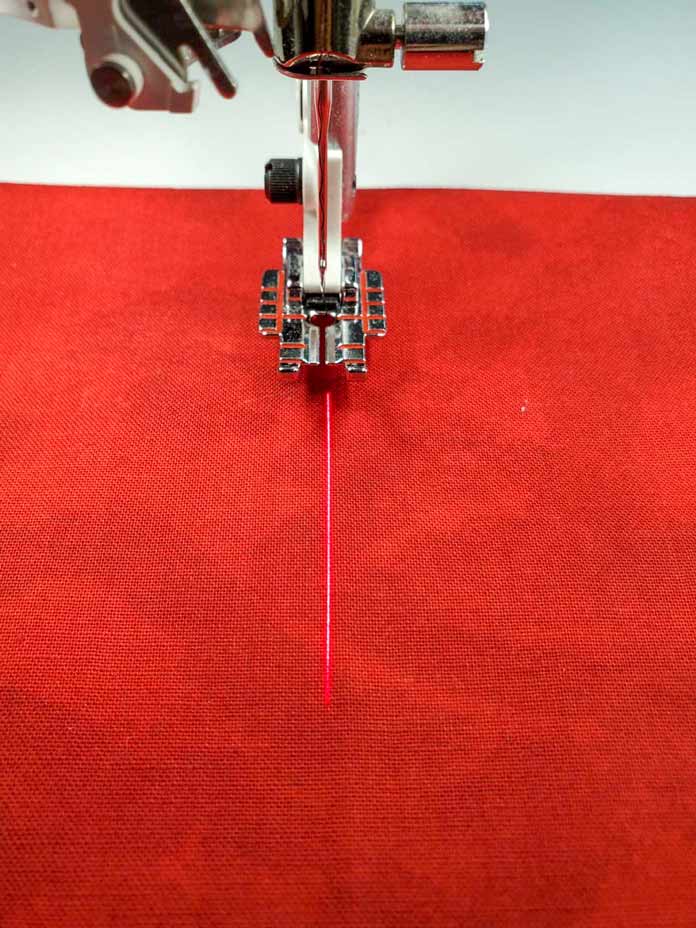 Now it’s time to put the Laser Sewing Guidance to work. I decided to test it by joining a bunch of 2½” strips I’m assembling so I can make a jelly roll rug. Quilters often use 2½” strips for binding and borders, so I thought this would be a good test.

The laser extends 2″ from the needle. As you can see, it’s not quite long enough when joining 2½” strips.

Well, let’s see how the Laser Sewing Guidance works. I lined up the laser with the intersection and I started to sew. 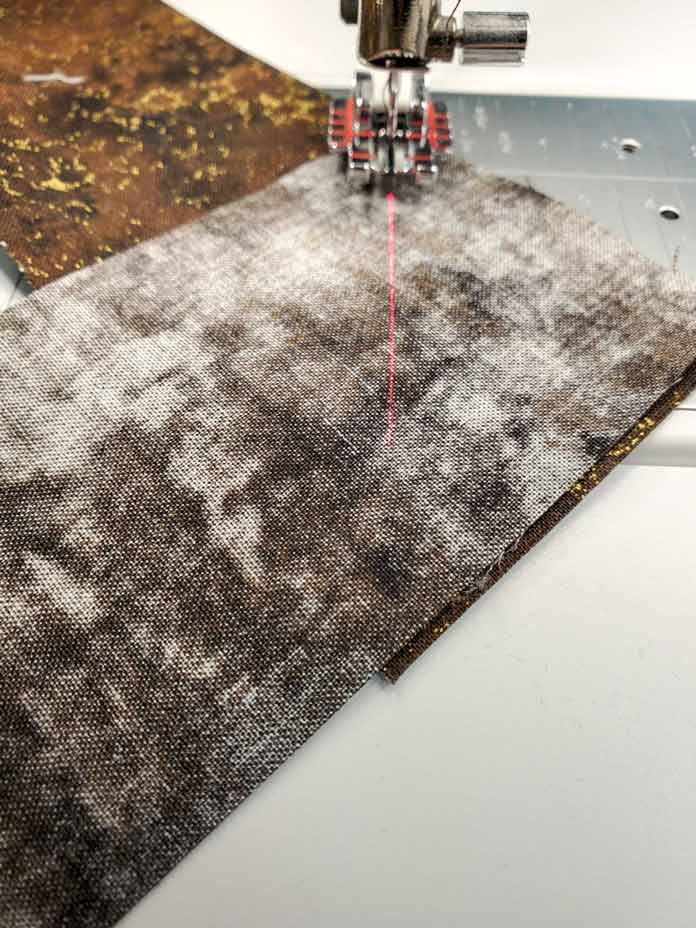 As I got closer, I was able to line the laser directly onto the intersection. 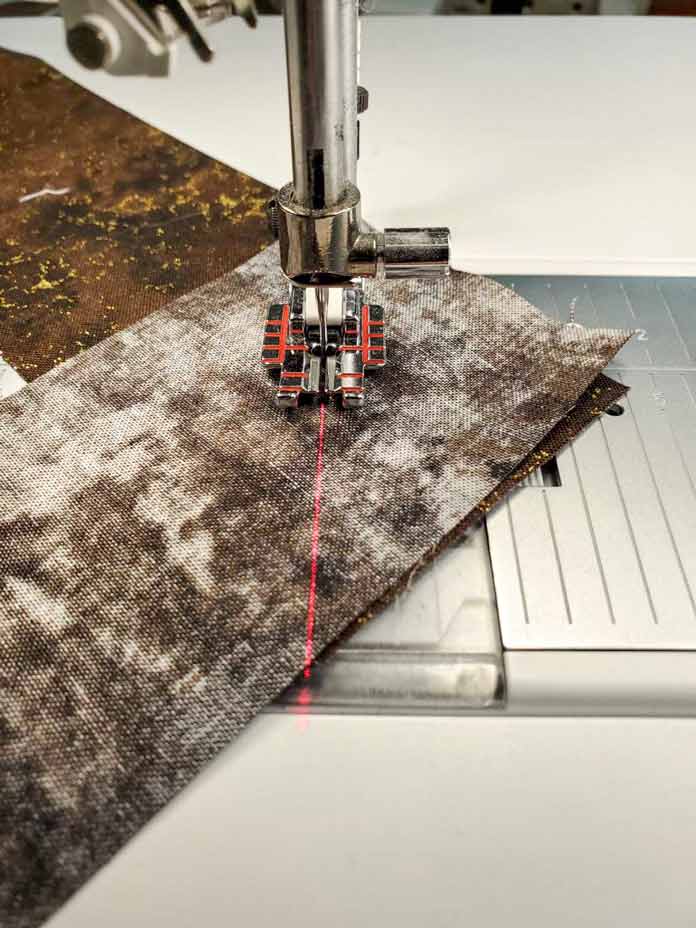 The Laser Sewing Guidance lined directly onto the intersection

Even though the laser didn’t project to the end of the seam when I initially started to sew, the sewing lines are perfectly straight. The length of the Laser Sewing Guidance made it super easy to aim for the first intersection and then line it up when I got close enough.

But did I get the edges lined up properly? I didn’t mark a thing and I didn’t pin either. 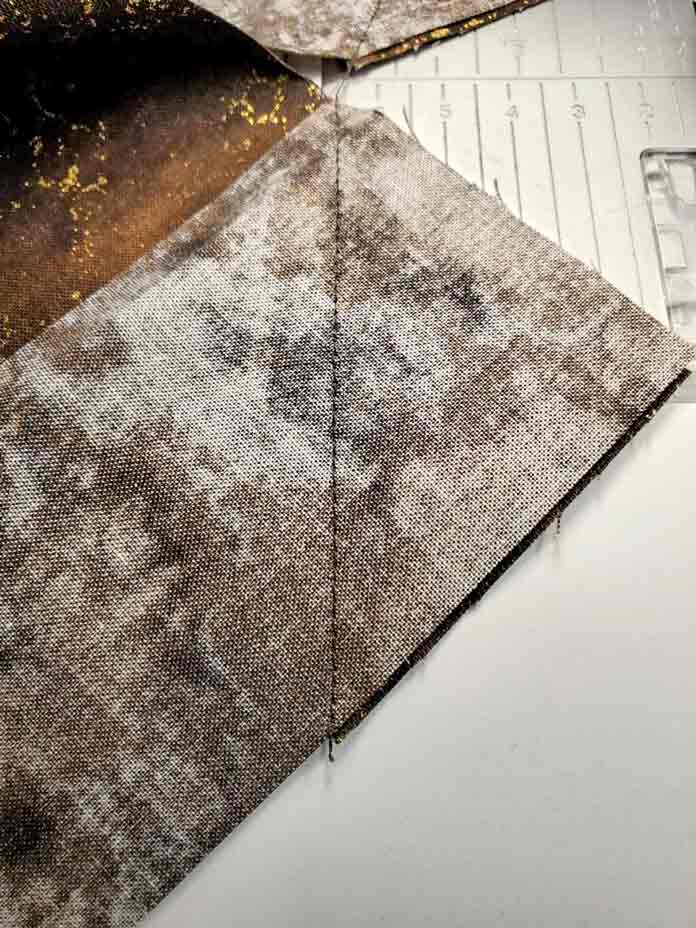 The seam line is straight

Oh!! Every seam was perfect. Do you know how much time I’ll be saving in the future? I make a lot of bindings and I join a lot of strips. If I no longer have to mark or pin them – well, that feature just saved me hours! Bring on the binding! 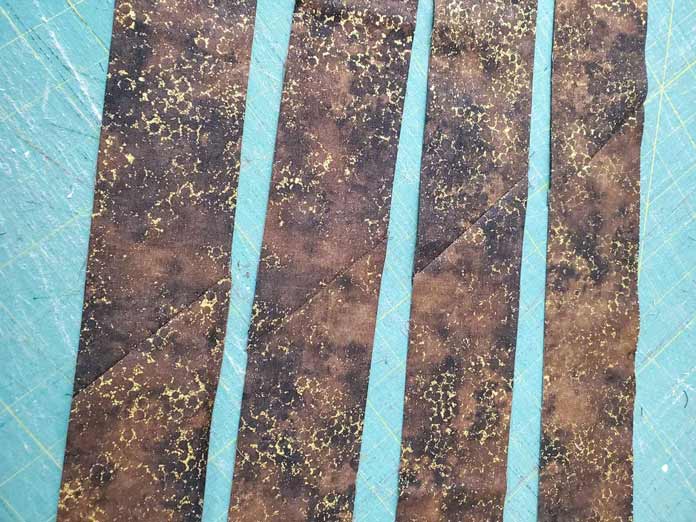 All the joins were perfectly straight using the Laser Sewing Guidance

I wasn’t sure how I would use the Laser Sewing Guidance to make half-square triangles, but I started by thinking in the box and moved the needle so I could keep the laser lined up from corner to corner of my squares.

The maximum distance I can move the needle is 4.5mm to the right of center, which makes sense since the maximum width of the stitches on the Designer EPIC 2 is 9mm and 4.5mm is half of 9. 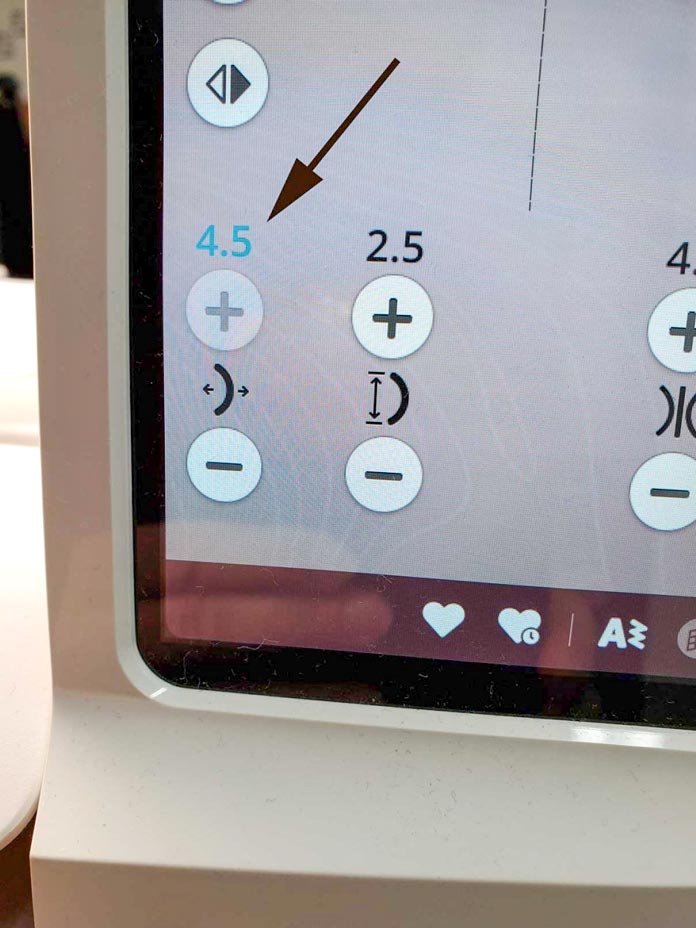 The needle is moved 4.5mm to the right of center

I like to sew my half square triangles using a scant ¼” seam, but you can see in the photo below, the 4.5mm is less than a scant ¼”. But I went ahead and tried it anyway. You can see the position of the needle is to the left of the ¼” marking on the bobbin cover.

I just realized something hilarious! Notice how I’m using metric and imperial measuring systems in the same sentence? I’ve become so used to this I don’t even notice anymore.

For those of you who grew up with one or the other, bear with me. That’s just the way my brain works. 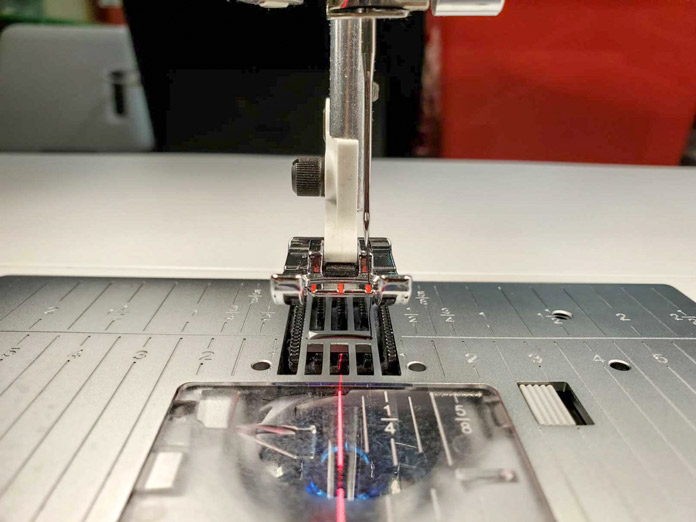 With the laser set for the center, the needle has been moved to the extreme right position 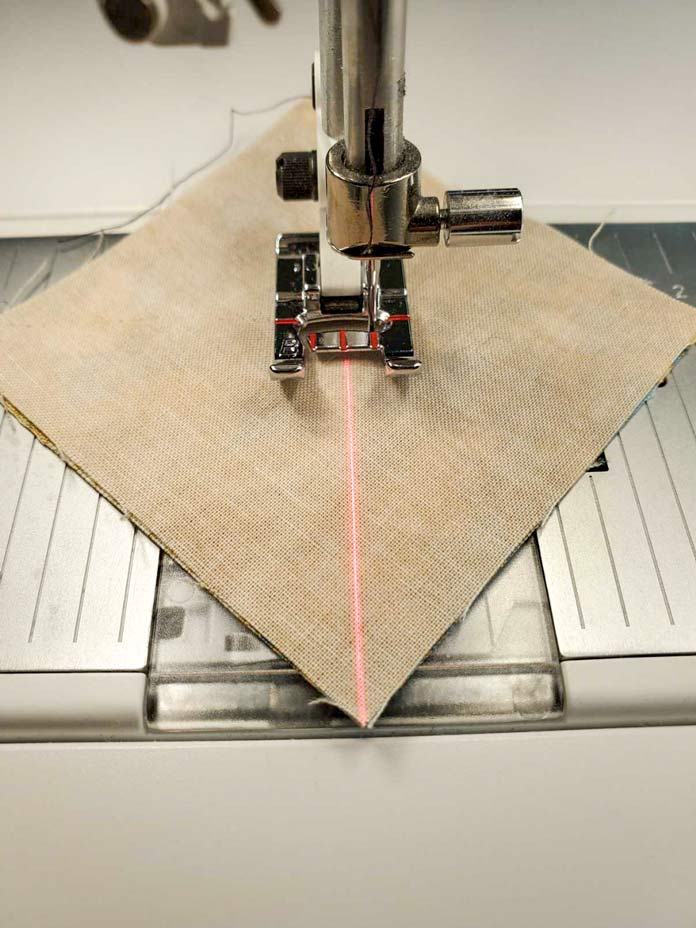 When I got to the end of the seam, I turned the squares around and sewed down the other side, keeping the laser in the diagonal middle of the square. 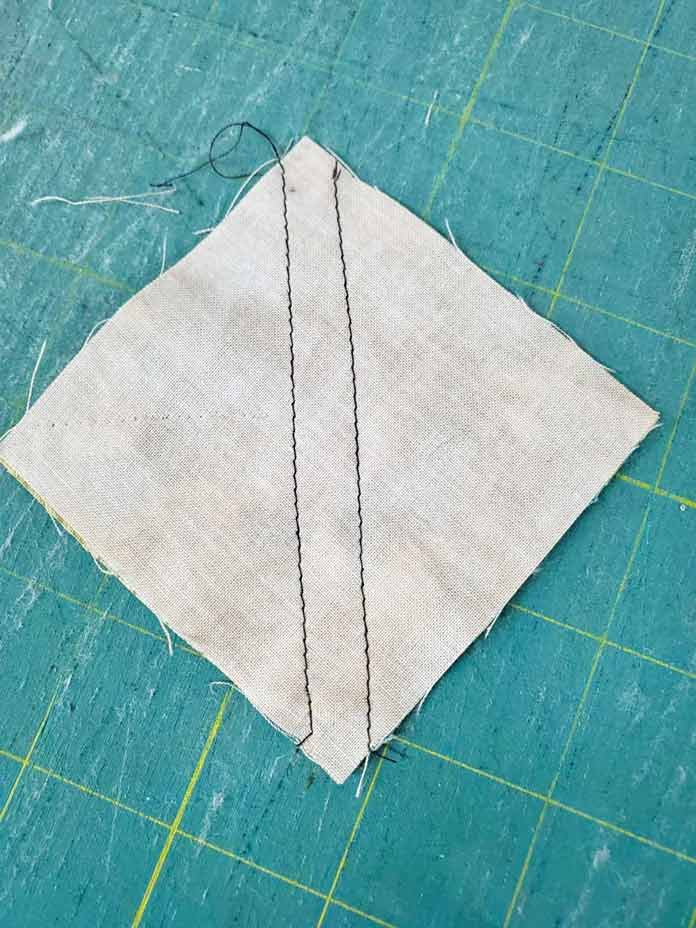 Two seams are sewn for making half square triangles

While the lines of stitching are straight, I wasn’t happy with the process. I found it a bit limiting and the seams just a slight bit too narrow. Notice I’m using a general purpose foot, not my beloved Quilter’s ¼” piecing foot. 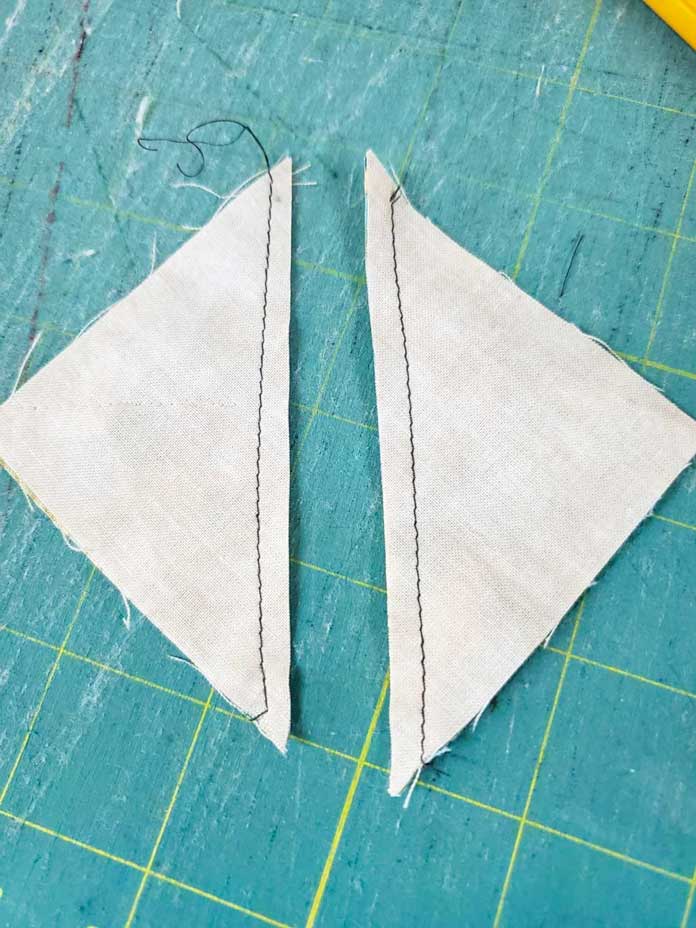 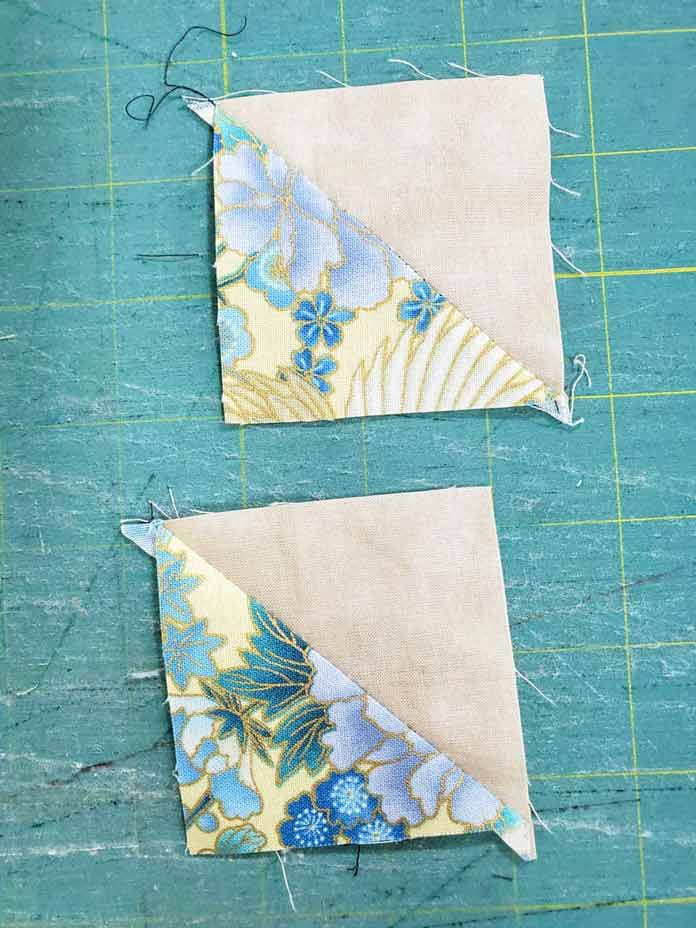 There has to be a better way to use the Laser Sewing Guidance to make half square triangles. 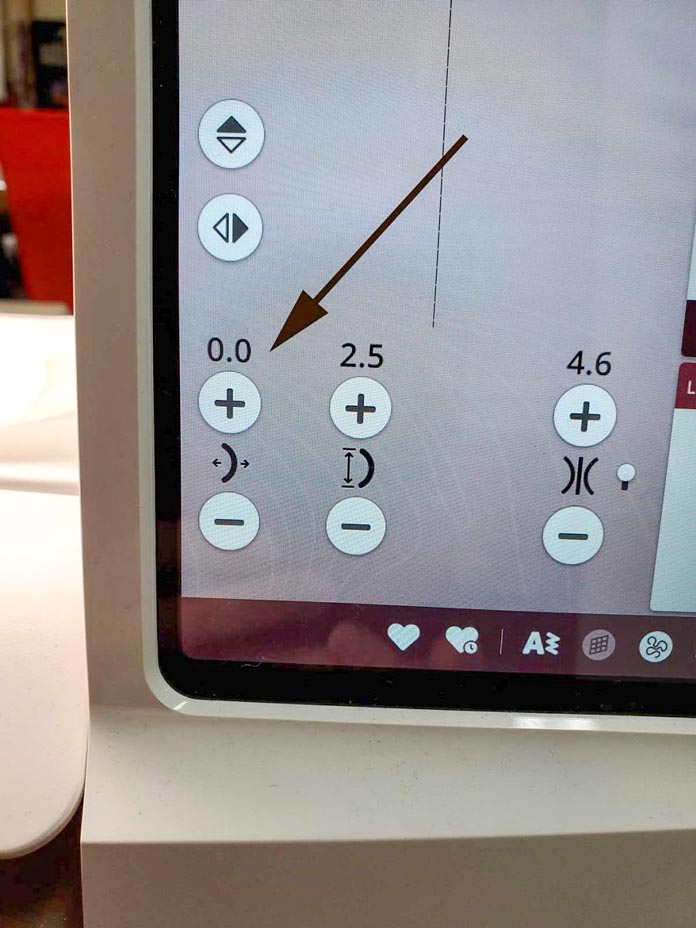 Needle position is back to the center

This time, the laser was moved, not the needle. See how the laser becomes an extension of the Quilter’s ¼” piecing foot? This makes way more sense. Sometimes, you have to try several methods to find the right one.

I think it’s very important to play around and experiment which is why I showed why my first method wasn’t the best. 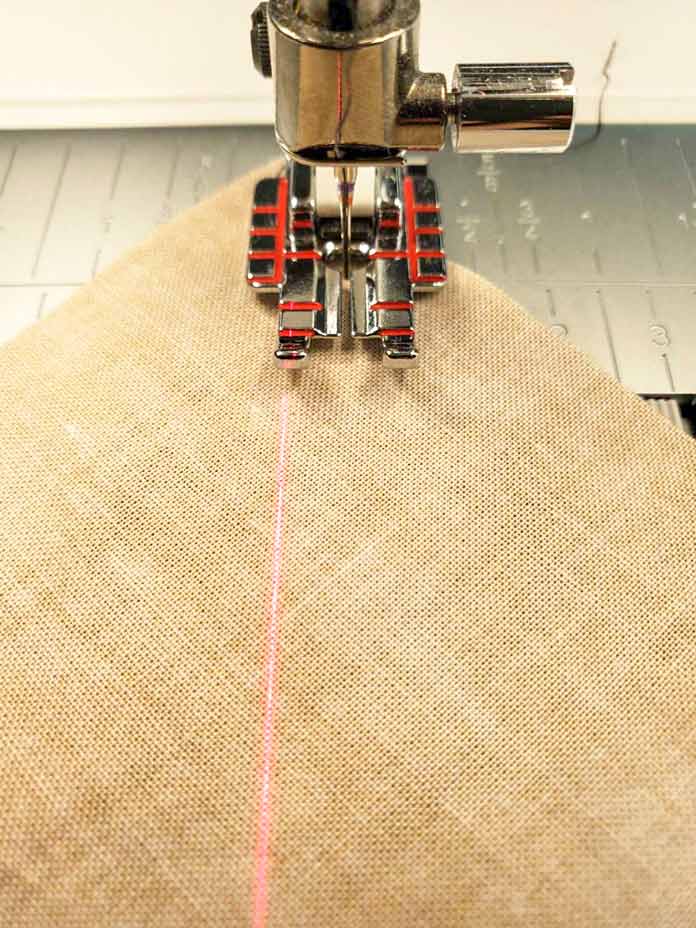 The laser is still being lined up with the virtual diagonal line on the fabric squares and is projecting the ¼” marking on the presser foot. Oh – this is making way more sense. 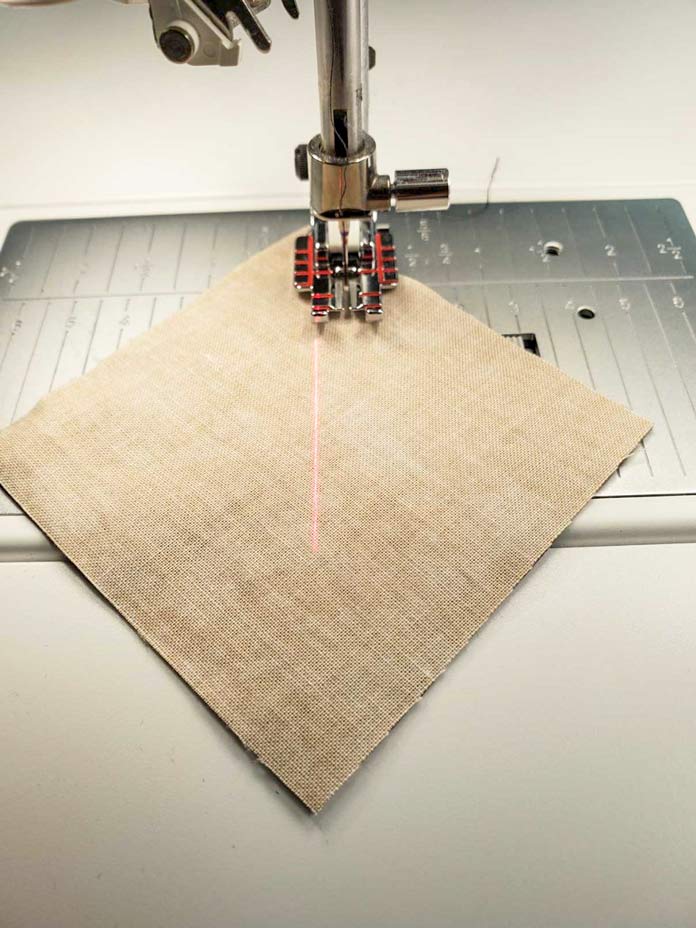 When I got to the end of the seam, I turned the square around and sewed the other side. Much better. 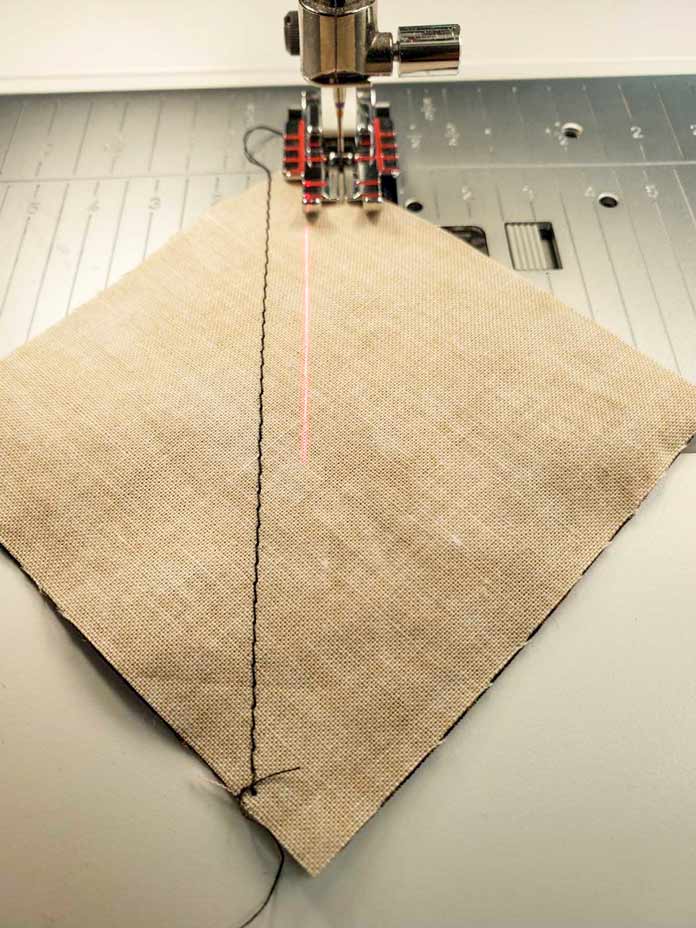 Sewing the second seam to make two half square triangles

The seams are further apart and I now have a scant ¼” seam allowance. Sewing with the Laser Sewing Guidance is super easy! It just took me a fail to wrap my head around how to make it work to my advantage. 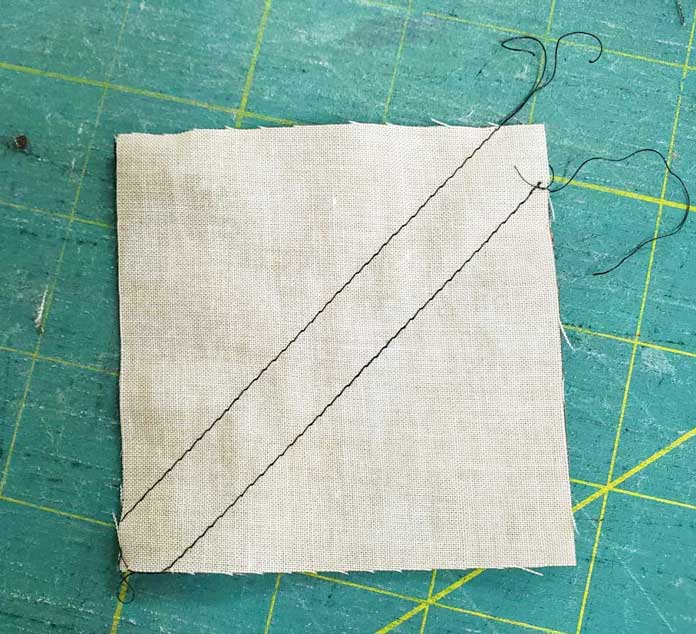 Two seams for the half square triangles

You can see in the photo below, I now have a scant ¼”. I’m a happy sewist!

By the way, I don’t normally sew with black thread, but it made it easier to see what I was doing. 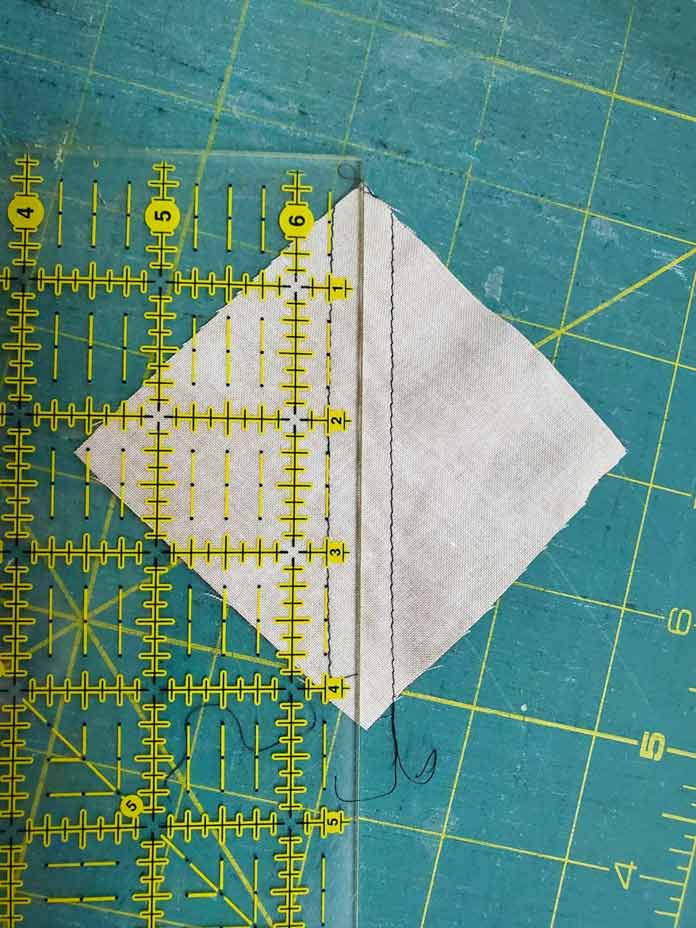 Here are my half-square triangles that can now be trimmed down to size.

Now, what am I going to do with all my free time? Sew more things of course! That was a silly question. 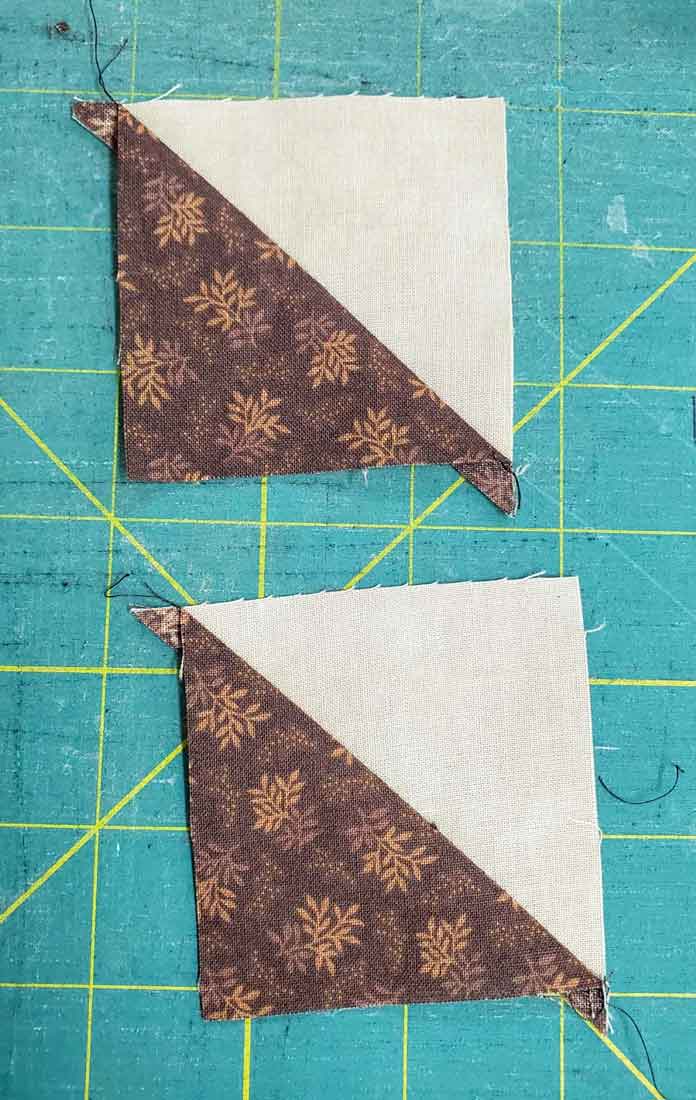 Half square triangles ready to be trimmed

So if I can join strips and make half square triangles using the Laser Sewing Guidance, then surely I can make flying geese as well.

And that’s what I did. In this photo, I’m sewing the first square to the rectangle. The square was 3½” so the laser didn’t go to the end, but it provided me with enough of an extension that there was no need to mark. 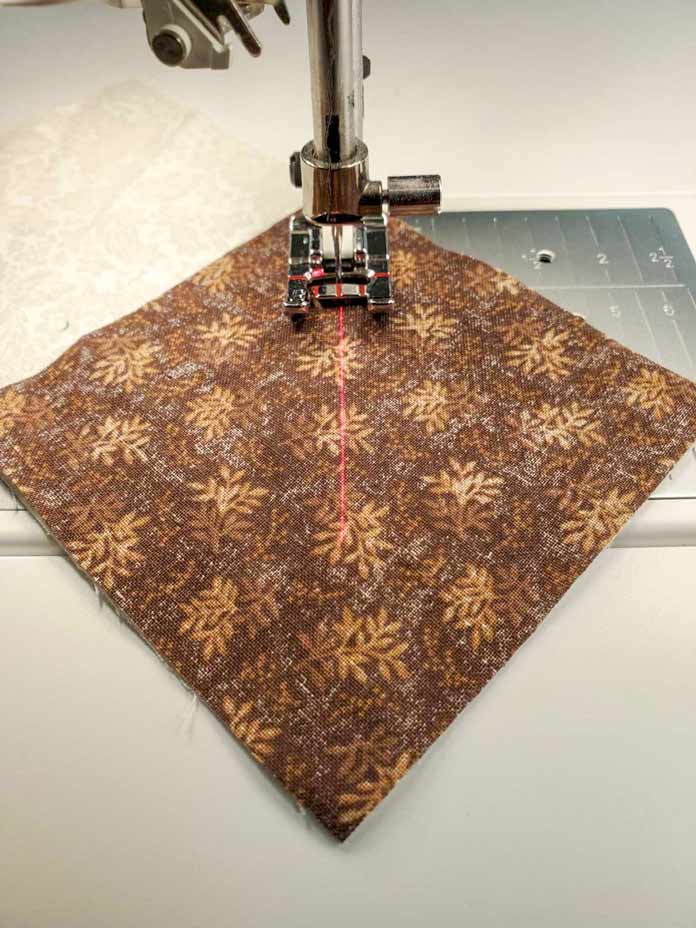 Using the laser to sew a square to a rectangle

This time I kept the laser in the middle, as the seam for sewing flying geese is similar to joining strips. 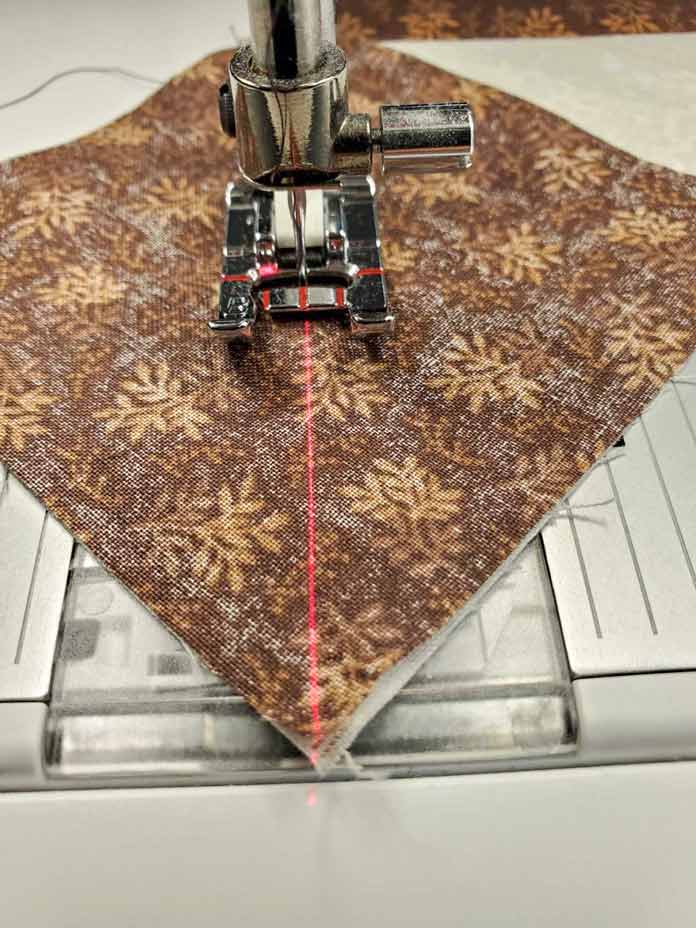 The first seam of the flying geese unit is completed. 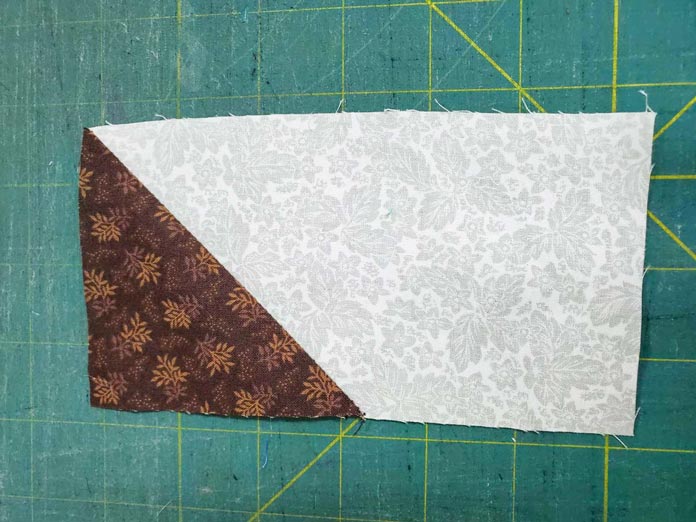 One seam of the flying geese unit is completed.

Here’s the final unit. No marking. That’s a first for me and it certainly won’t be the last one. 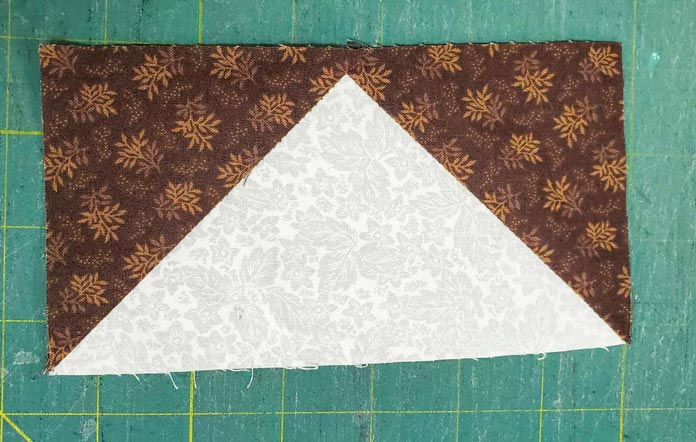 When the laser is activated, a settings menu appears in the bottom right corner on the main touch screen. I can change the intensity of the laser beam from 1 to 10. 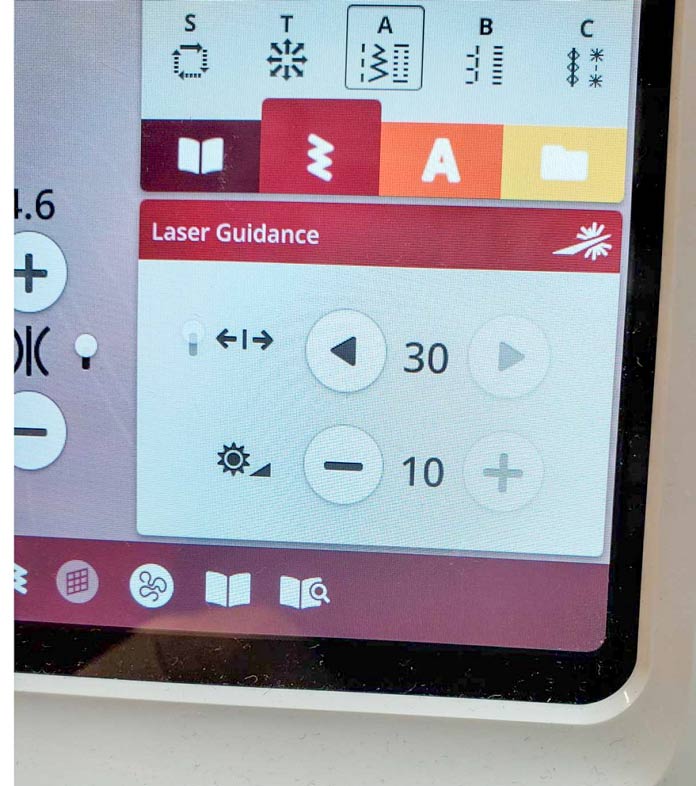 The laser is moved 30mm to the right of the needle. 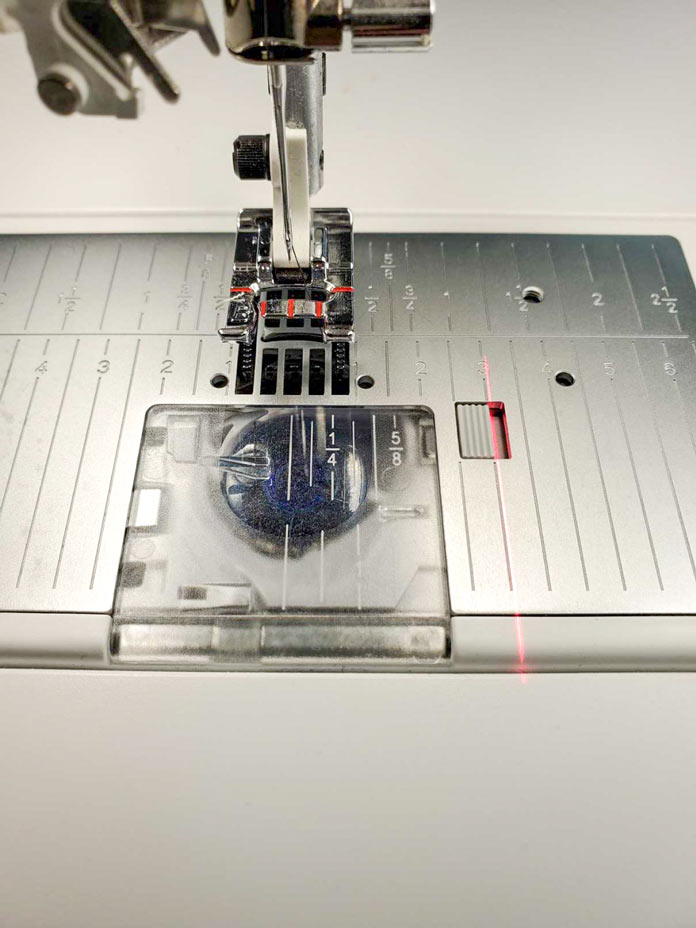 The laser is set 30mm to the right of the needle

I don’t know about you, but I’m jumping up and down with excitement right now. Do you know what this means? Not only can we use the laser to mark lines when we join strips, make half-square triangles and flying geese units, but we can quilt straight lines and grid patterns using the laser. No more marking! Are you doing lines of decorative stitches? No more marking. This is a huge, huge time saver and takes a huge weight off our shoulders by not having to find the appropriate marking tool for the job.

The Laser Sewing Guidance is available in sewing mode only.

Oh my goodness – isn’t this just the best new feature ever?

I’ll be back tomorrow with the Husqvarna Viking Designer EPIC 2 and I’ll be chatting about some of the new accessories and the Integrated Dual Feed technology. I can hardly wait to share it all with you.

Have a super day!

This is part 2 of 5 in this series.
Go back to part 1: 10 epic features of the Husqvarna Viking Designer EPIC 2

5 key tips for learning about the Designer...

Tips for learning from the JoyOS Advisor

Self-paced learning through built-in tools on the Designer...

7 tips for successful quilting in the embroidery...