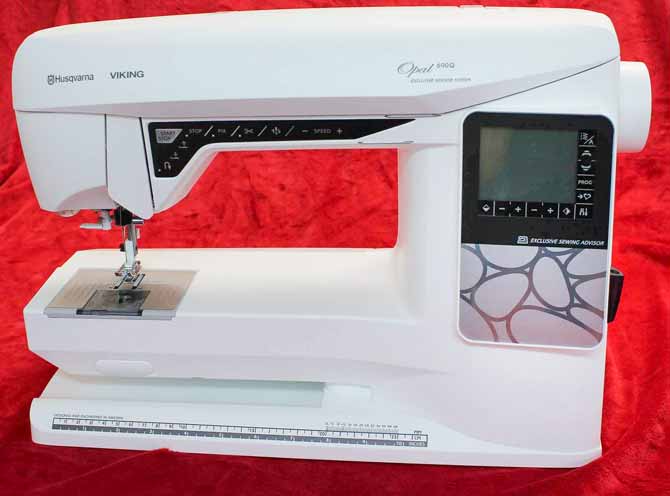 I’ll be making up a couple of small quilts. I belong to several guilds and making quilts for various community groups is a big part of the guild’s mandate. Not only does it make you feel good doing it, but it’s also a great way to help out the guild and the community. The best part, you don’t have to purchase any supplies.

I thought it would be a great way to use up some thread! Let’s get started!

My kit came with the squares pre-cut. It’s a simple quilt with two different fabrics which are alternated. That’s easy enough. 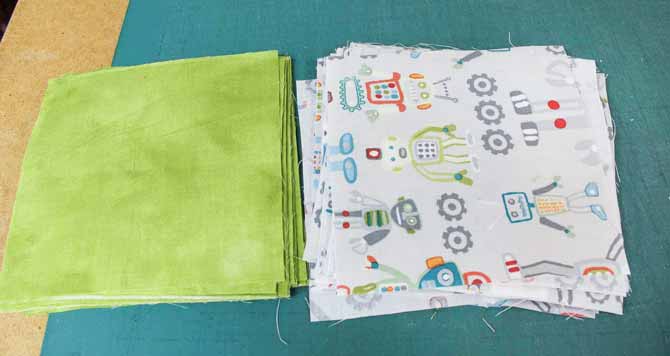 Stacks of fabric squares ready to sew into a quilt 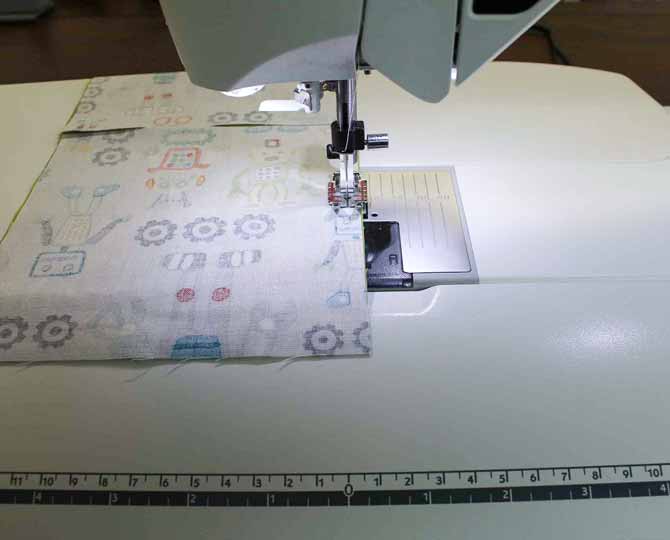 Chain piecing is a simple technique of sewing one seam right after another without breaking the thread. It was easy to chain piece these pairs of blocks. I had the two stacks of blocks beside me and was consistent in how they got sewn together, as you can see above. It’s totally dependent on what you’re sewing, but in this instance with only two fabrics, it was easy to keep the pairs the same.

Chain piecing saves time and thread. To chain piece, I sew one seam and then without cutting the thread, I start to sew the next seam. This is a simple task with the Opal 690Q because of the Needle Up/Down function and the Sensor Foot technology. The presser foot raises ever so slightly when I stop at the end of a seam and it’s easy to get the next pair of fabrics right up to the needle in preparation to start the next seam. This feature also helps with accuracy as the presser foot is not hindering the placement of those fabrics. I could manually lift the presser foot, but that takes times. The Opal 690Q has this built-in feature which I find very hard to sew without.

When I’m done sewing my blocks into pairs, it’s easy to clip the small length of thread that’s between the blocks to separate them. This saves a lot of time trimming threads. It drives me crazy when I see huge threads hanging off blocks. It also saves thread which means I get to sew more before I have to change the bobbin. 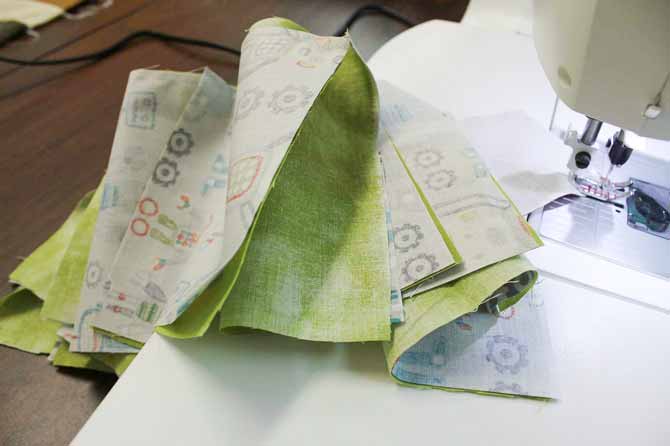 Chain piecing the pairs of blocks

I’m all about being consistent when I sew. While there are several ways to press the seams in a project, I chose to press all the seams to the green in this project. That made it easier to remember which direction to press. 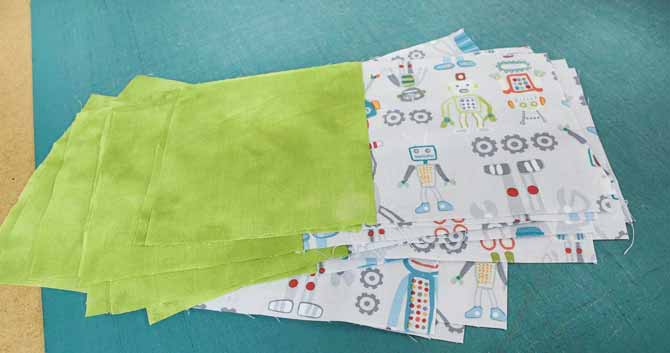 Seams pressed to the green

The pairs were then sewn together into rows with three pairs in each row. Again, all the seams were pressed to the green so the seam allowances would nest nicely against each other and make lining up those blocks very easy. 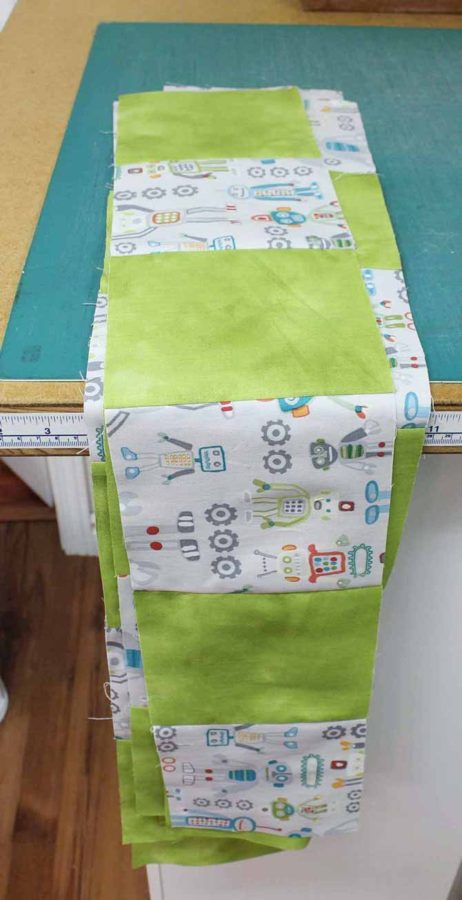 The pairs of blocks assembled into rows

And it’s time to change the bobbin! I was getting a bit worried as some of the projects I was working on didn’t take up a lot of bobbin thread. Would I ever get through those five bobbins? You just have to start sewing quilt blocks together and the thread gets used up! 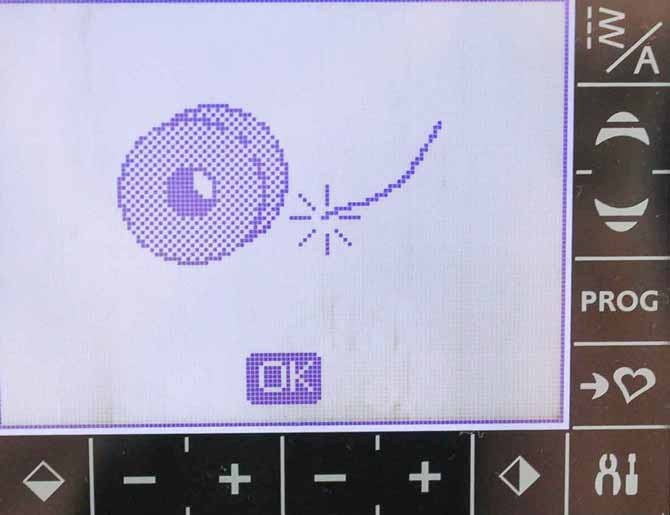 Time to change the bobbin

When I sew a quilt together, I try to handle the rows as little as possible. The more each piece gets manipulated, the more the danger of it getting stretched.

If you think about it, that means that each row was handled the same amount of times with equal wear and tear on each row. If you were to start with row one and keep adding, row one would have gotten a lot of extra wear.

The other reason, I like this method of sewing the quilt top together is the bulk. If I sew the second row to the first and keep adding, I’m going to be creating a project that keeps getting bigger. It’s harder to handle. If you sew each half of the quilt and then lastly join the two halves, the only time you’re dealing with a big project is that last seam.

As I mentioned earlier, I’m all about consistency with my quilting and it doesn’t matter what size quilt I’m working on, I piece them all like this. 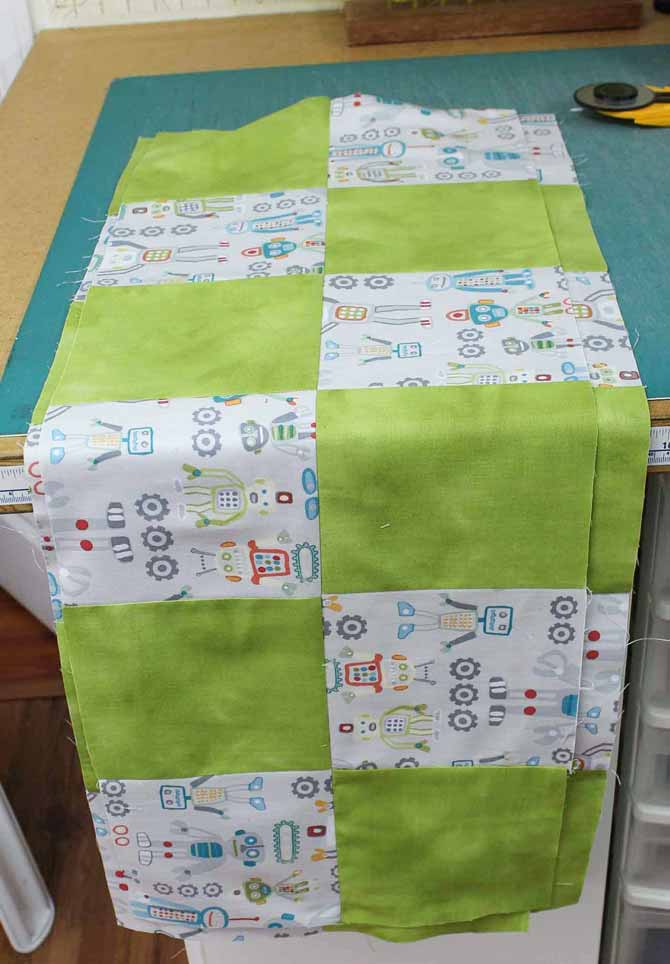 Rows of the quilt are sewn together in pairs

As easy as that, the quilt top is together. When I press the seams that join the rows, I try to press them all in the same direction – all to the top or all to the bottom. It doesn’t matter which, but I try to be consistent with each quilt.

I did mention that it’s a small top so it didn’t take long to assemble the top. I was feeling happy because it’s one more project done. But wait! This one has to be quilted. That means I’m not done. 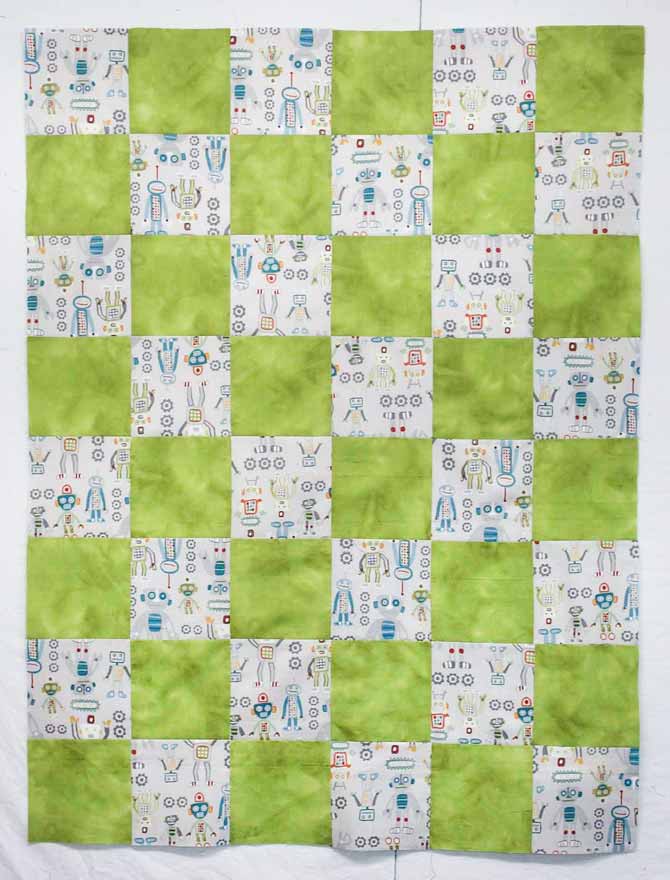 Now here’s where I had a small issue. Reading the instructions, I was supposed to add batting (which wasn’t in the kit). But I remember making these small quilts before and there wasn’t batting. So I ploughed ahead and just sandwiched the back to the front (both cotton) in the envelope style. What I didn’t realize is that if the quilt has flannel for the backing, there is no batting. Ooops – I made a mistake.

I thought I would share that with you in the event you think I had lost my mind in what I was doing. These quilts are for seniors in wheelchairs – I guess I just made two summer weight quilts.

I layered the quilt top right sides together with the quilt back. I sewed all around the edges securing the quilt top to the backing, leaving an opening so it could be turned inside out.

This is where I was very happy for my Quilter’s ¼” Piecing Foot P. By using the markings on the foot, it was easy to see exactly where I needed to pivot the quilt at the corners. Love love this foot!

And no lifting of the presser foot at the corner to pivot as the Needle Up/Down function with the Sensor Foot technology did all that work for me. 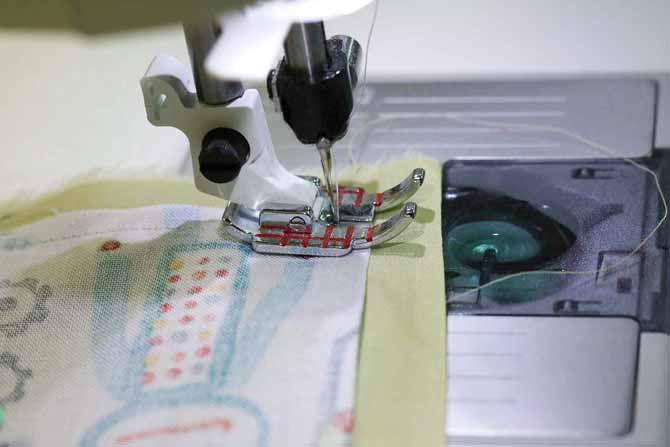 I trimmed away the excess backing and the corners and turned the quilt inside out. Very gently, I poked out the corners using my point turner. The opening was closed using a small strip of fusible web.

A good pressing and it’s time to quilt. I pinned the layers together and yes, this poor quilt was a bit thin with only two layers of cotton. The method of quilting as recommended by the guild was to tack the intersections of the blocks. 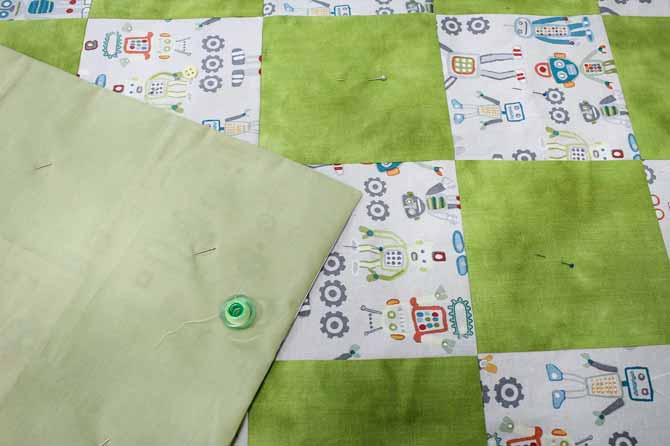 Quilt ready for the quilting – a tacking stitch 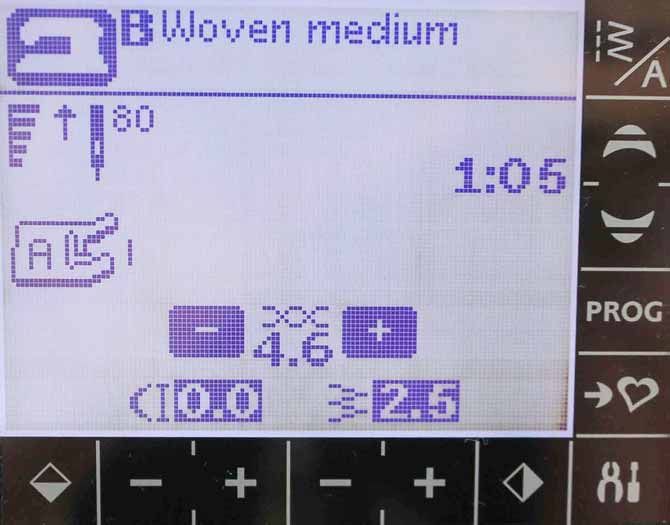 Settings for the tacking stitch

In the photo below, you can see the front and the back of the tacking stitch. It’s very neat and fast. While I left the gray thread on top, I had to cheat again as I put a different color thread in the bobbin. 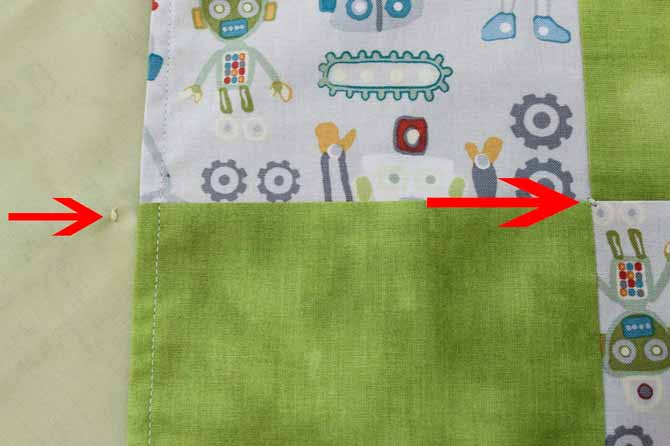 Tacking stitches from the back and the front of the quilt 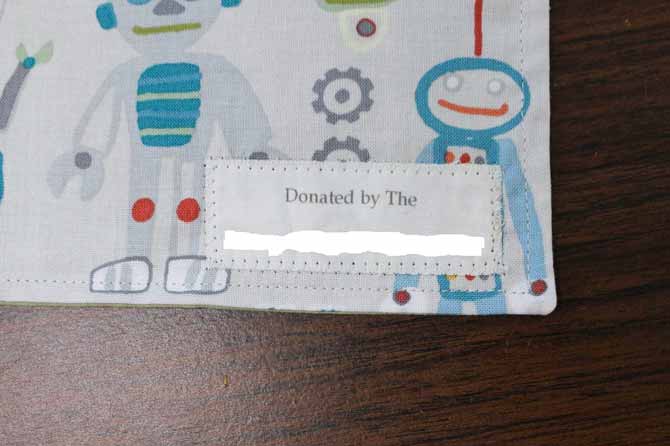 I had so much fun with that first quilt, that I had to make a second. 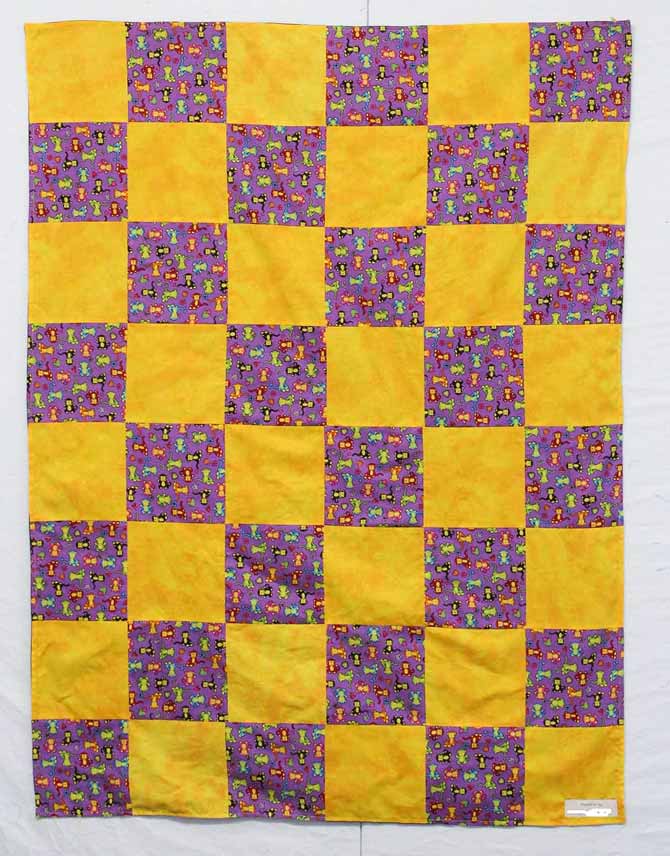 These were two small quilt kits that I had taken out over the summer. It was great to get them completed. I rarely get things completed on time and this was a bonus for me!

I hope you enjoyed today’s adventure. These quilts didn’t take long to complete and I didn’t use much thread! How about you? Have you at least got those five bobbins wound? Sorted out a project or two?

Come back tomorrow as I have more projects to work on with Husqvarna Viking Opal 690Q as I try to use up those five bobbins.

This is part 3 of 5 in this series.
Go back to part 2:  2 questions before you sew binding by machine

Go to part 4: Techniques for buttons, batting and string piecing

2 questions before you sew binding by machine

Very informative post! Thank you for the detailed explanation. For a beginner like me this is a keeper!

How to Use a Sewing Machine and...

How to make a string quilt block...