Did you enjoy the time-saving tips from yesterday?

Simple stuff, but once you’re organized you’ll have more time to play with the Husqvarna Viking Opal 690Q. Seriously? I want to sew more and by eliminating all those time-wasting elements from my sewing space – I’m much more productive.

While sewing machines today require very little in daily maintenance, there are some things that we must do to keep our sewing machines in top working order. These tasks are simple but crucial. Best of all? They’re easy! 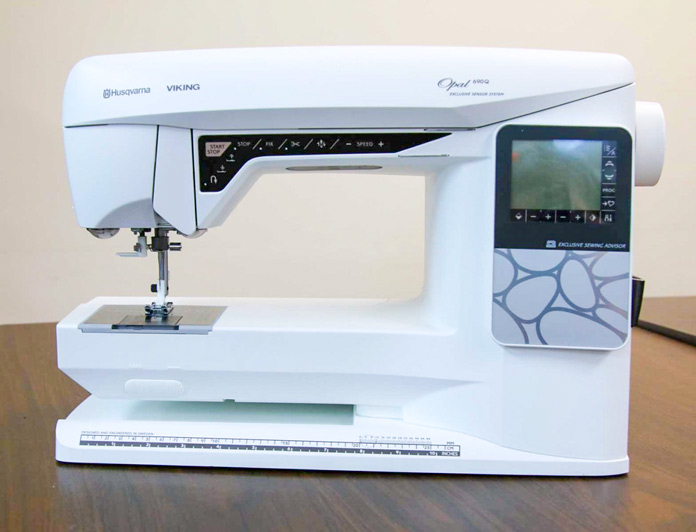 Lint in the bobbin case – Oh my!

Speaking of which, did you know that you can get a specialty bobbin case to use with thicker threads? This bobbin case has a slit on the side so you bypass the tension. It’s perfect for thick threads and bobbin work. The case is white so there’s no danger of getting it mixed up with the regular bobbin case. I haven’t used mine in a while – I should get it out!

Oh my – I clean my machine on a regular basis but look at how much lint has collected. Not only in the bobbin case area, but on the feed teeth.

Did you know that a dirty, dusty bobbin case, can affect the tension? Yep – that’s why it’s important to keep that area clean. 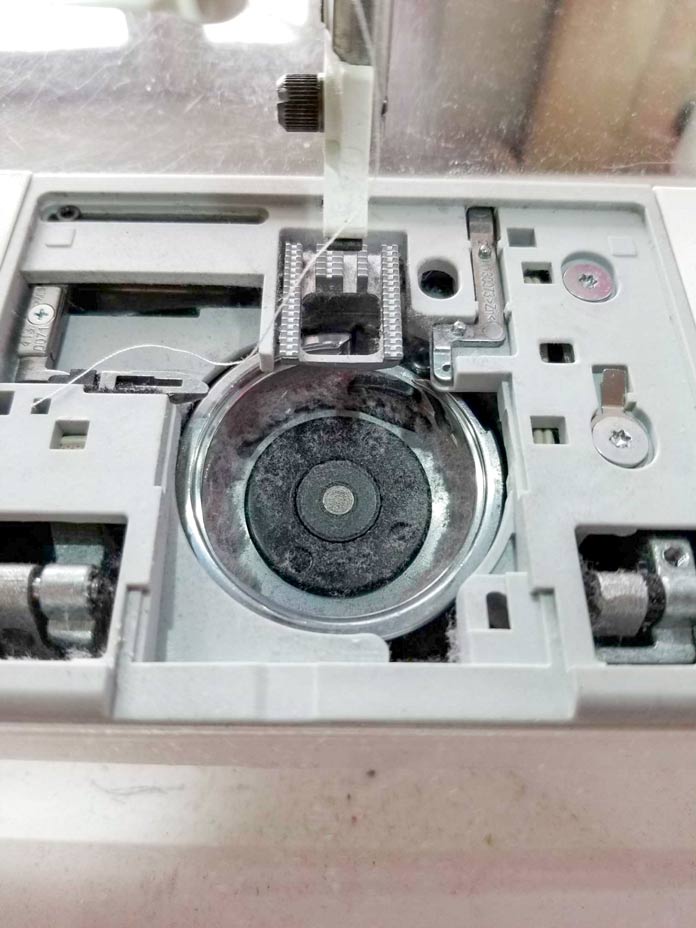 That’s a lot of lint beneath the bobbin case

I found these tiny brushes which work perfectly to remove lint from the feed teeth. I also use the brush that came with the machine and a cotton swab to pick up the lint in the bobbin case area. I also use tweezers to grab clumps of lint that I can’t reach with the brush. Be careful – there are some delicate parts in this area, including the bobbin sensor. Be thorough, but gentle.

Look at how much lint was in there. That’s a lot. 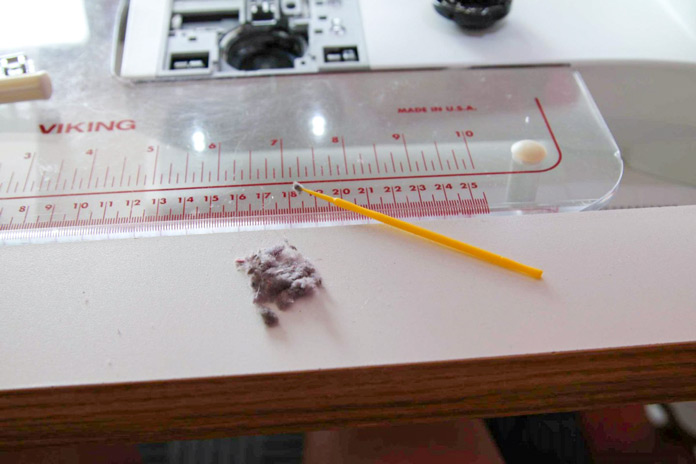 Lint removed from beneath the bobbin case

That area definitely looks much better.

Did you know that lint in the feed teeth prevents the sewing machine from feeding the fabric through at a nice even rate? Yep – don’t forget to clean the feed teeth. If you can’t find those little brushes, then remove the presser foot and use your brush to clean between them. 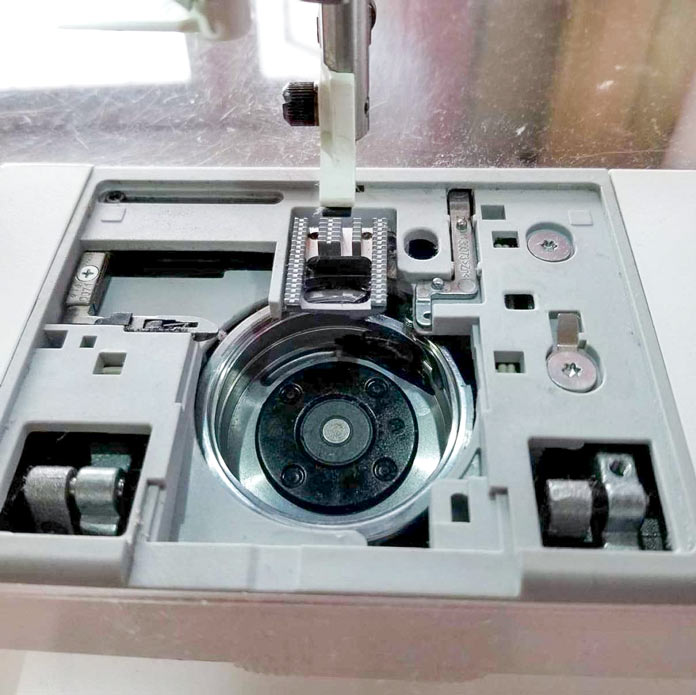 The area beneath the bobbin case is nice and clean

Here are a couple of other reasons why you should keep this area clean. You have a sensor in the bobbin area. That sensor will tell you when the bobbin is getting low. If there’s too much lint, the bobbin sensor won’t work.

Your built-in scissors are also in this area. If there’s too much lint or thread, the scissors won’t work properly.

I know that you’re going to ask how often should one clean this area.

I’m always up for learning new things and I like to think I’m somewhat handy. I was never happy with the amount of thread that was loaded onto the bobbin when winding it. There’s a sensor and the machine will stop when the sensor says the bobbin is full.

While you can’t force the sewing machine to go beyond the sensor, you can move the sensor. 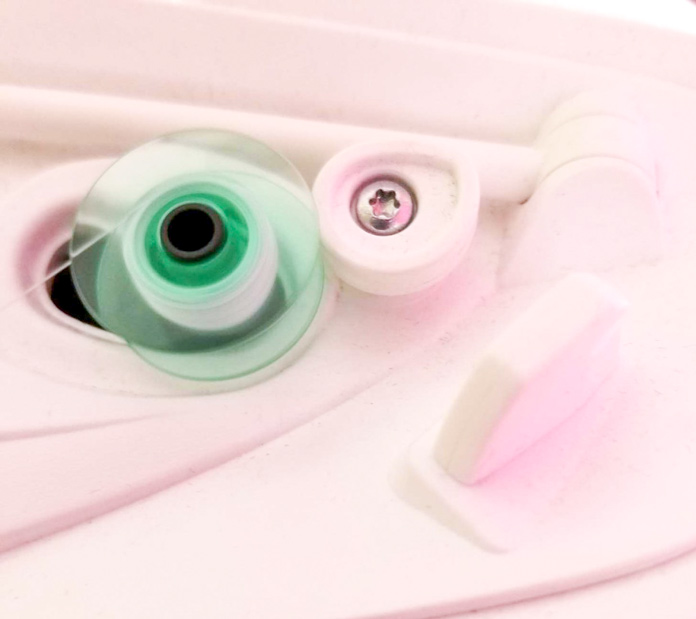 The sensor to prevent bobbins from overfilling

So while it’s OK to change the position of the sensor to get fuller bobbins, do not overfill them. You’ll be sorry.

Here are my five nicely wound bobbins. I’m already noticing a difference in how long I can sew before I’ll run out of thread. I may have to change to four bobbins (instead of five) before changing the needle and cleaning out the bobbin case area.

I love when I can solve a problem on my own.

We all know about the importance of a good quality needle in the sewing machine. We also know that it has to be changed regularly (about 8 hours of sewing which is approximately 4 or 5 bobbins). There’s also a huge range of needle types and sizes that you can use for various projects.

However what happens when you forget? A while back, I was sewing on some vinyl. I had a leather needle in the sewing machine. Then I went away and when I returned, I had forgotten that little detail.

When I started to sew on cotton, I couldn’t figure out what the heck was the matter. The machine was clunking through seams and making a huge racket. Then I realized that the Exclusive Sewing Advisor was set to Vinyl/Leather and I had a leather needle in the Opal 690Q.

Wow – once I changed that needle out, the sewing machine was much happier.

The lesson? If your machine doesn’t sound right, chances are that something isn’t right. Stop – look at the machine. Does the needle match the fabric and thread? That’s usually the problem.

Have a look at the needles below. On the top is the Size 16 Leather needle and on the bottom is the Size 10 Microtex Sharp needle. No wonder the machine was making a huge noise. I was literally punching holes through my work.

I’ve got some more time-saving tips for you today.

TIP 1 – store all your sewing machine needles in one spot

I can’t say this often enough. Store all your sewing machine needles in one spot. I have a small needle case that I made completely on the sewing machine to store partially used needles. The packages of needles in the tin are for the brand new needles. Use this – keep it handy. Keep it neat and keep it up to date. You’ll never waste time searching for another needle.

The tutorial for the needlecase can be found in my post called, Making a sewing machine needlecase using the Sapphire 965Q embroidery feature. 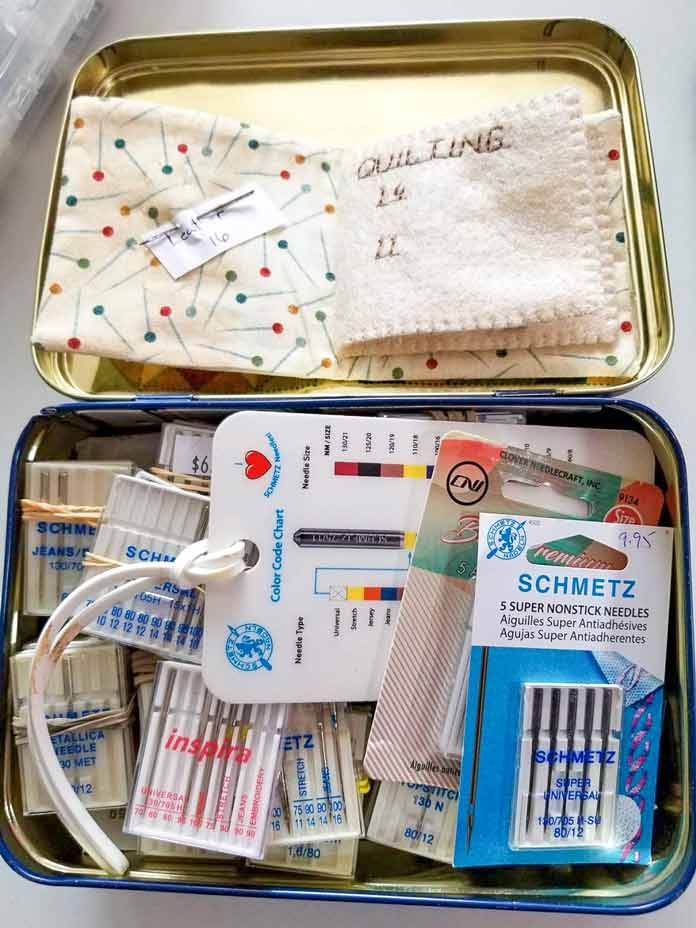 Keep your sewing machine needles stored in one spot

If you’re cutting borders, sashings, or backing, write the measurement down on a piece of paper. If you’re like me, you’ll cut the first one and then forget the measurement by the time you get to cut the second one. If you write it down – you won’t forget. 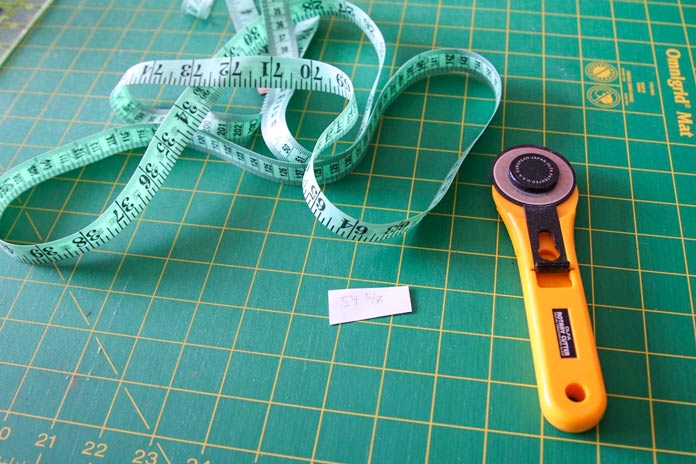 Once you’re finished a project, put everything away that you no longer need. If you don’t have a home for that fabric or you no longer like it or you won’t use the leftovers, bundle it up and find a friend who will use it. Bottom line – do not leave it on the ironing board or the cutting mat. Find a home for it.

The same goes if you have to stop working on a project for whatever reason. Try to put all the supplies needed for that project in the project box. Be mindful if you put tools in the box. Chances are, you’ll forget where they are and you’ll end up buying a new one. 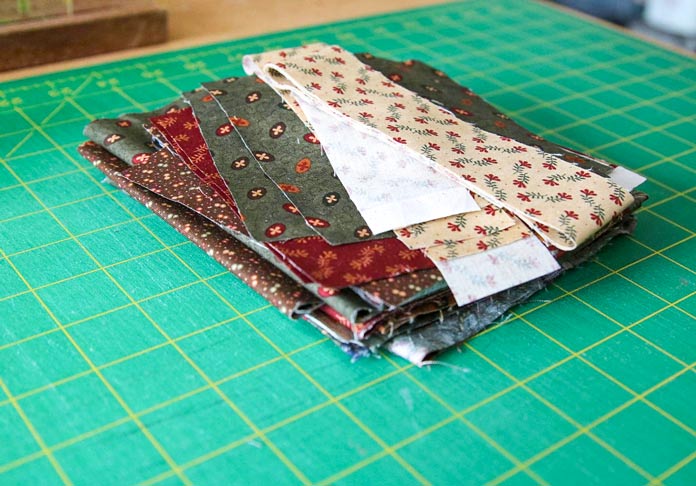 Put your leftovers away!

I know that some people collect pincushions and have pincushions all over the place. I have two. Both of them, I’ve had for years. One is magnetic, the other is not. I keep one by the sewing machine so when I remove a pin (I do pin borders on a quilt), I put it in the pincushion. The other one stays on or near the cutting table, which is where I pin the border on. By the way, it’s a breeze to cut and pin a border with a wide-open cutting table.

No need to run around and remember where the pincushions are. No need to remember you left the pins at the sewing machine, but you’re at the cutting table. And no need to clutter up your work area with more than two pincushions. In my world, it’s all about being the most efficient I can be. 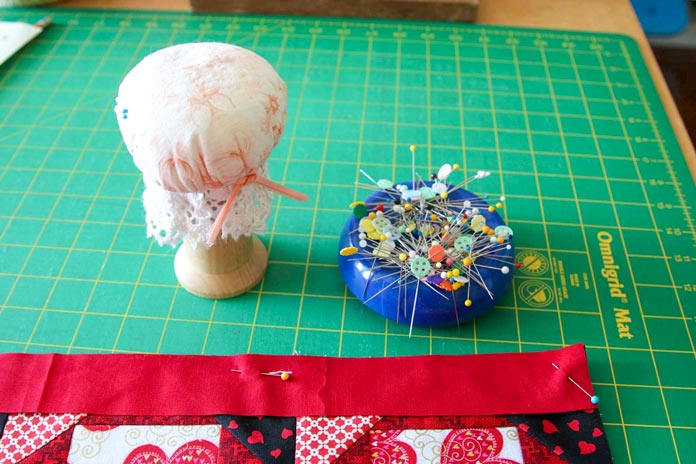 And that wraps up another day. Some more super tips for saving time, but more importantly, be sure that you do the proper maintenance on your Husqvarna Viking Opal 690Q for optimal performance.

Use the Exclusive Sewing Advisor to keep you organized with the proper needles, thread and fabric combinations.

Tomorrow, I’m working on a small project so be sure to come back and see what I’ve made.

This is part 2 of 5 in this series.
Go back to part 1: 7 time-saving tips for more sewing time

Tips for sewing the perfect square in a square quilt block

I cleaned my machine as described but now my machine won’t start sewing. I pressed down the pressure foot the start/stop button and nothing is working. The plugs are all plugged in. The machine turns out but then nothing happens. I just bought this used machine from a lady that said she only used it a few times for straight stitching. What can be the problem?

I really like how this describes how to remove lint from the machine. It’s so important to keep the machine clean for it to keep running for a long time!

Maximizing on the features of the Opal...

7 tips to speed up the quilting...