It’s the end of the week. I hope you enjoyed the journey with the Husqvarna Viking Sapphire 965Q. It’s a superb sewing machine and there’s so much more that I want to share with you, but that will have to wait for another week.

Follow along today as we make a needlecase for sewing machine needles. You can customize it for hand needles or leave it generic. 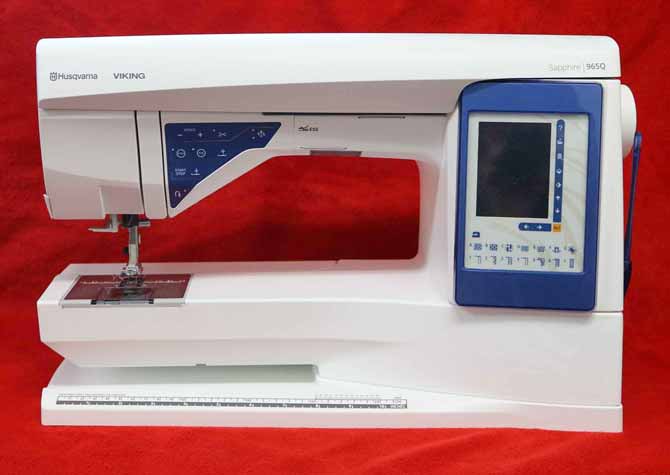 I’m using Northcott’s A Stitch in Time fabric collection for the needlecase. I fussy cut two quilt blocks from one of the fabrics to use as the outer fabric and a coordinate for the lining. I found some felt in my stash for the insert. You don’t need much, those quilt blocks are approximately 3¼” square. 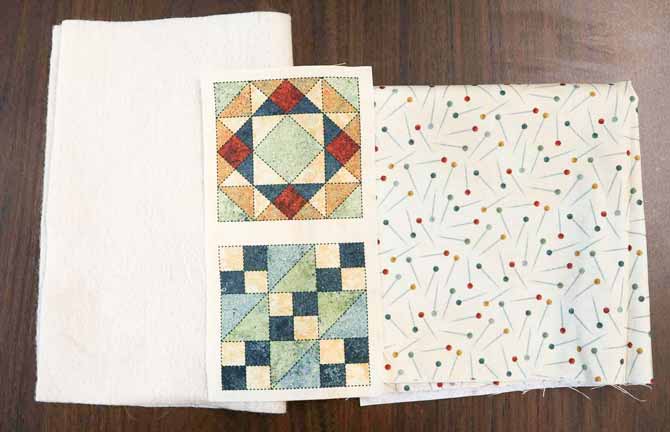 Supplies for the Sewing Machine Needlecase

I decided to use some fusible fleece inside the outer cover. This isn’t necessary, but I like my projects to have some body to them, so I dug out my resealable bag of fusible fleece scraps and found a piece that was a perfect fit. 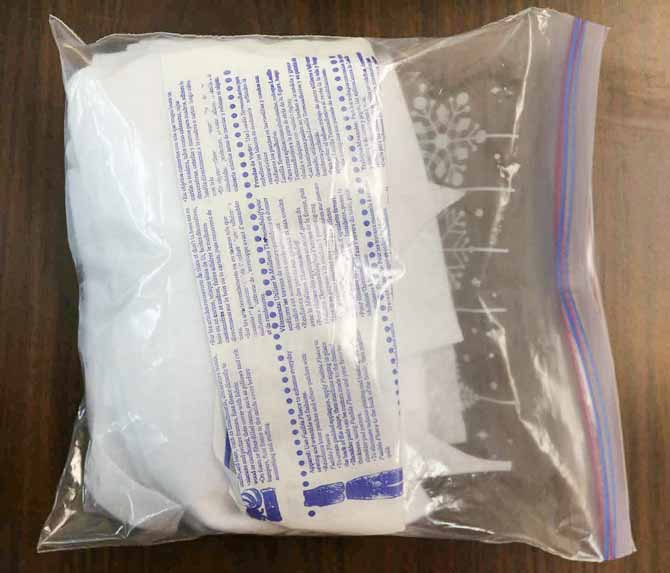 I’m using my outer fabric (the two quilt blocks) as my guide for size. If you’re using something from your stash, the size is approximately 7½” x 3¾”.

Cut one piece from each of the outer and lining fabrics. You also need to cut one piece of fusible fleece that is ½” smaller on the length and the width. In this case, 7″ x 3¼”. 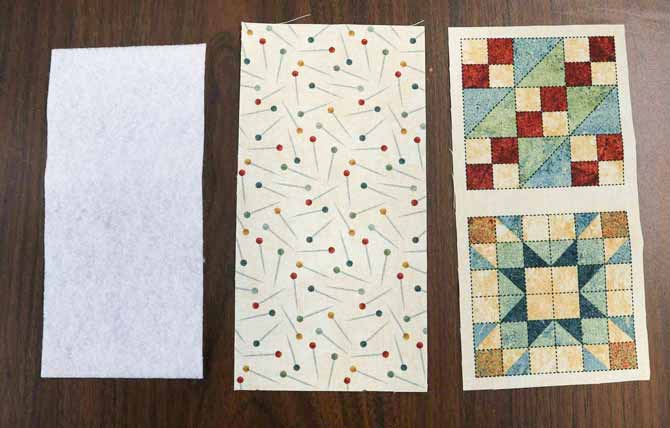 Sewing the outer section of the needlecase

Place the right sides of the outer fabric and the lining right sides together and using ¼” seam allowance, stitch on all four sides, leaving an opening (about 1½”) along one side (not at a corner) so you can turn the project inside out. In my case, I sewed along the edges of the quilt block. 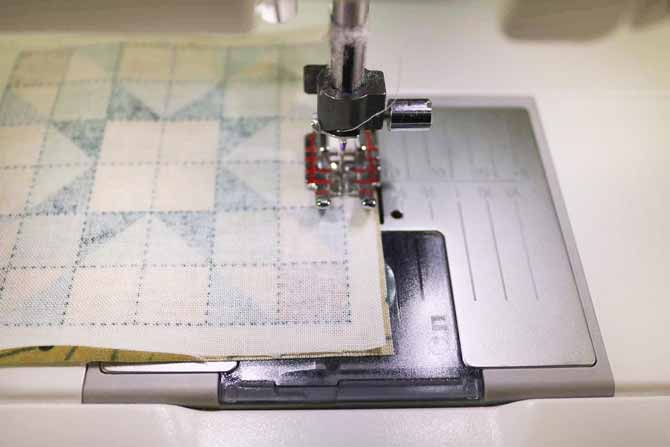 Place the fusible fleece on the wrong side of the outer fabric. It was cut ½” smaller so the piece should fit just inside the seam lines. Following the manufacturer’s instructions, fuse the fleece to the project, making sure it’s well adhered. A hot iron and steam are often required. 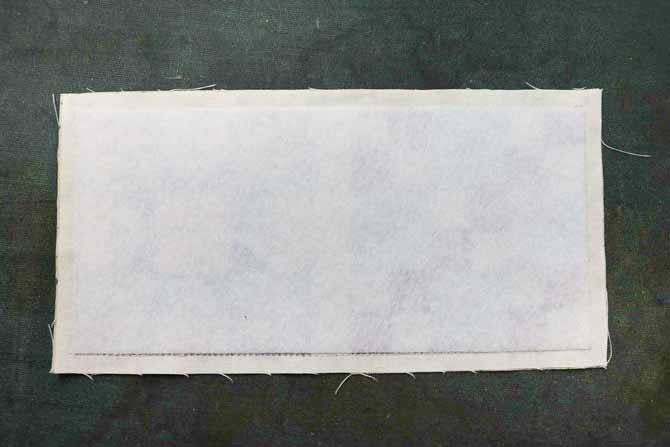 Cut away the corners of the project. You can see in the photo that I not only clip the corners away, but I grade down the side seams as well. This helps to reduce the bulk in the corner once the project is turned inside out. 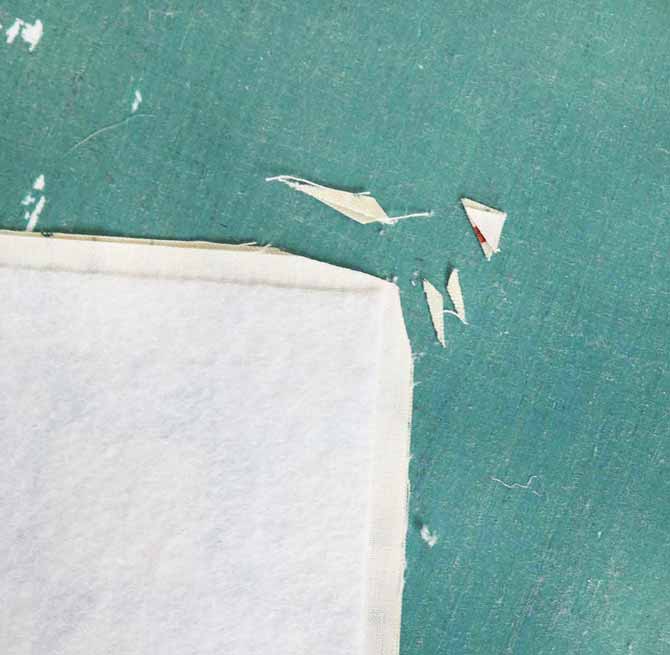 Trimming the corners down to reduce bulk

Turn the project right sides out. I used a point turner to help poke out the corners. Make sure you do that job gently as with the clipped corners, it’s easy to go right through the corner and that isn’t a good idea. You can also use the point turner to run along the edge (inside the project) to help get a smooth edge. Press well.

You can close the opening by hand stitching, but I like to use the ¼” strips of fusible web. I cut a small piece and insert in the opening and fuse in place. Works for me and simple! 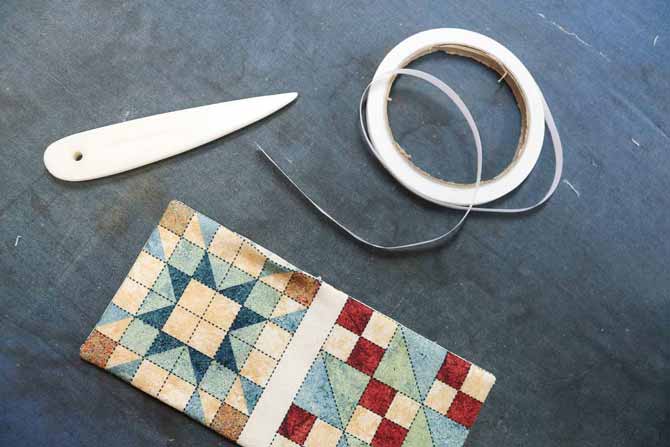 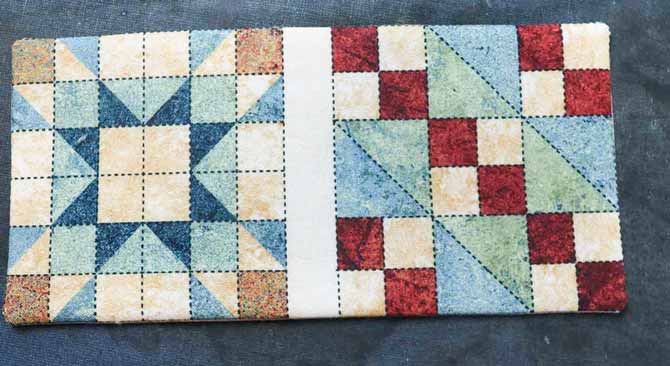 The finished cover of the Sewing Machine Needlecase

I could simply have inserted a piece of felt inside the cover of the needlecase and be finished. However, I wanted to customize the insert to make my life easier. If I put the partially used needles in the case with no labels, I won’t remember which needles are in there. Plus, there are built-in alphabets in the Sapphire 965Q and I thought this would be a good time to give them a try.

I’d been sewing with the single hole throat plate and when I attempted to select a non-straight stitch, I got a pop-up warning message. This is so awesome because even though I know to change the throat plate if you’re focused like I tend to be when I sew, you don’t always think all the steps through when you switch from one technique to another. No danger of broken needles with this Stitch Width Safety feature. 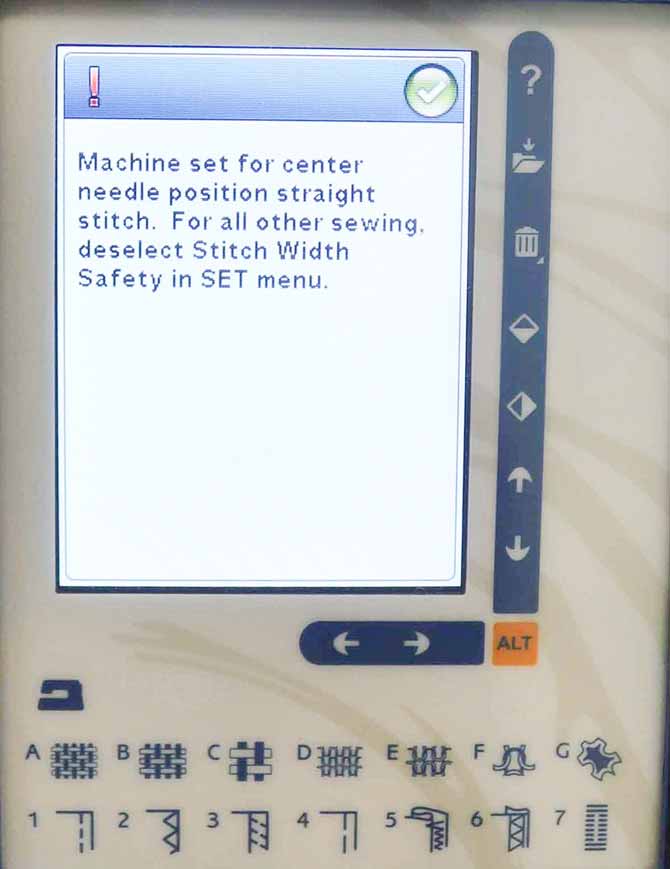 Pop up safety message on the Interactive Touch Screen 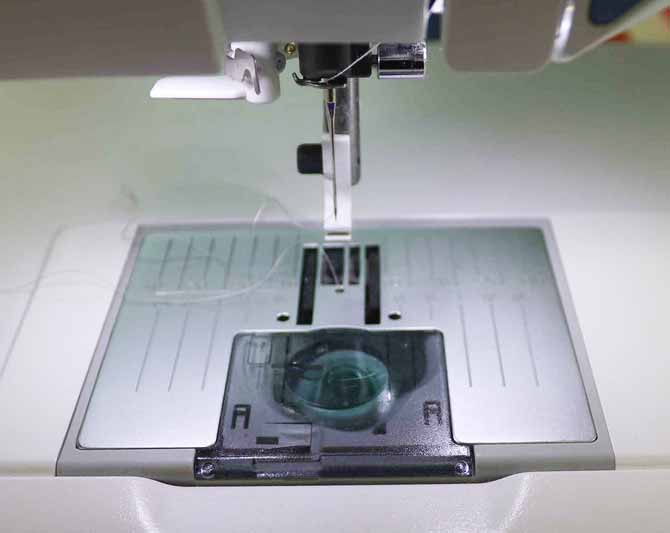 I removed the single hole throat plate and I got a second pop-up warning message as you can see below. So even though the single hole throat plate had been removed, I still had to deactivate the Stitch Width Safety. While the Sapphire 965Q is intuitive, it makes sure that I know what I’m about to do before it deactivates that stitch width safety. I like that the Saphire 965Q asks me – “do you really know what you’re doing?” 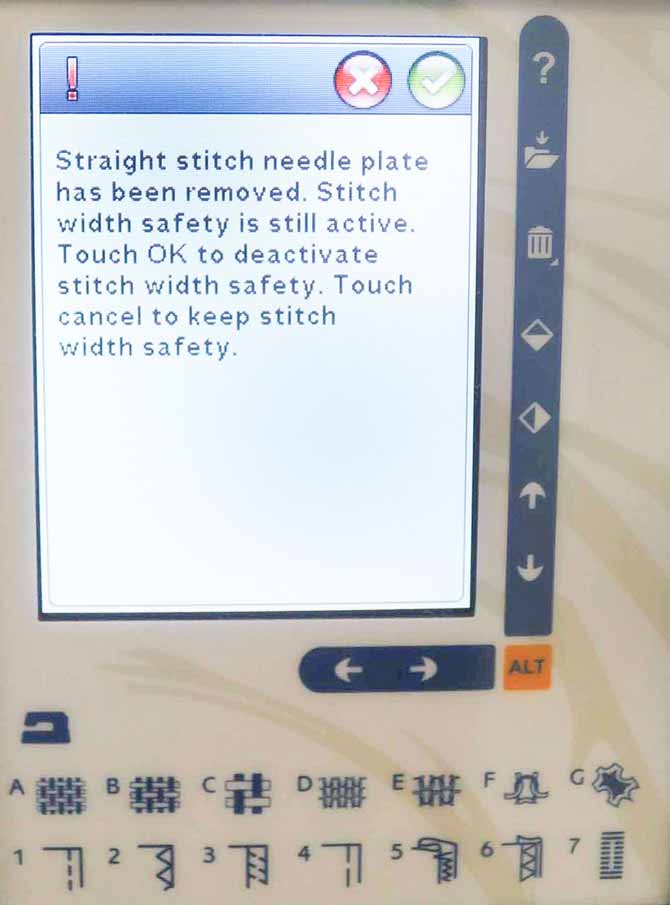 Second pop up safety message regarding the Stitch Width

Here you can see that the Stich Width Safety is now off. I have put the all-purpose throat plate on the sewing machine and I’m ready to program my lettering. 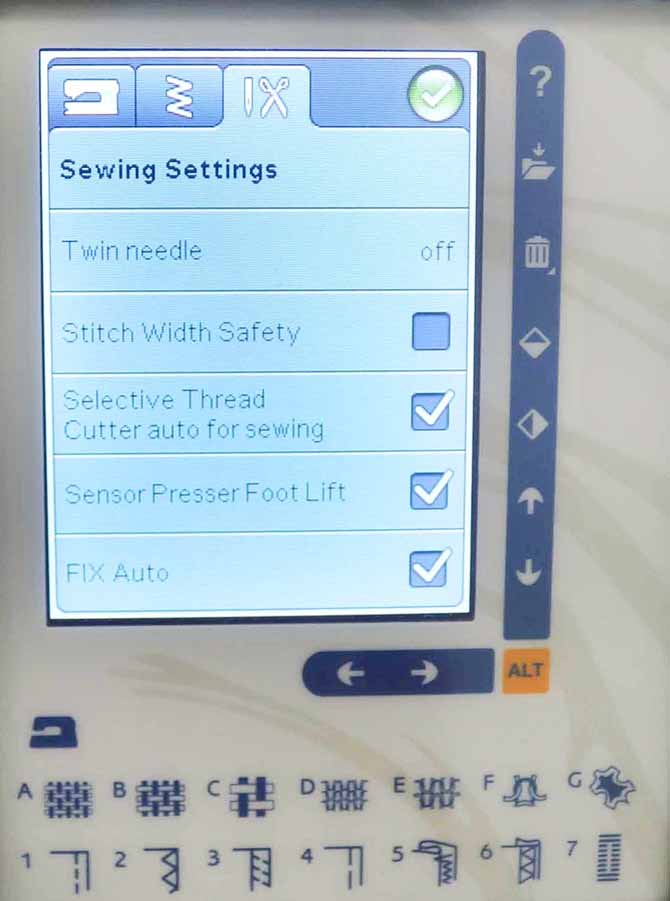 There are five built-in alphabets in the Sapphire 965Q. I choose the Block alphabet for my project. 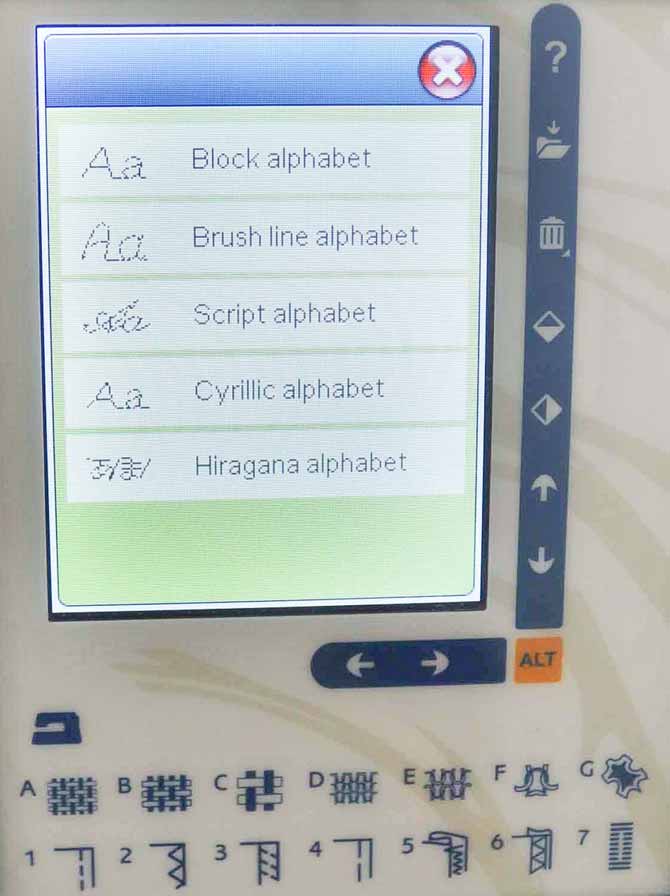 It’s easy to program the lettering, with separate menus for Upper Case, Lower Case and Numbers. You can see on the Interactive Touch Screen below the first part of my lettering which is the word “Topstitching”.

I decided that I would use the Sapphire 965Q to write the type and size of the most common needles that I would use. As I was prepping this project, I realized that despite the fact that there are many different sizes and types of needles, I really only use a few different ones. I created a space for each of the needles and sizes that I use. You’ll see which ones in a minute. 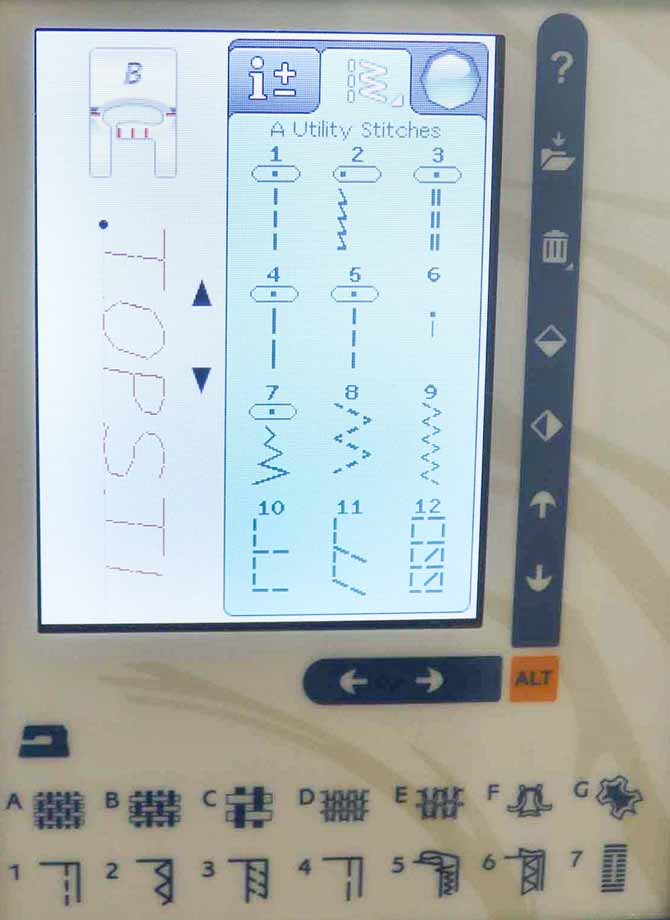 I’m going to use the START/STOP function instead of the foot pedal for my stitching so I lowered the speed. This will allow me to keep my lettering somewhat straight and in the right place. Again, this is a needlecase, strictly for my personal use. If something is a bit off, I’m not likely to care. But if this project were super important, then I would take the time to position the lettering more accurately. 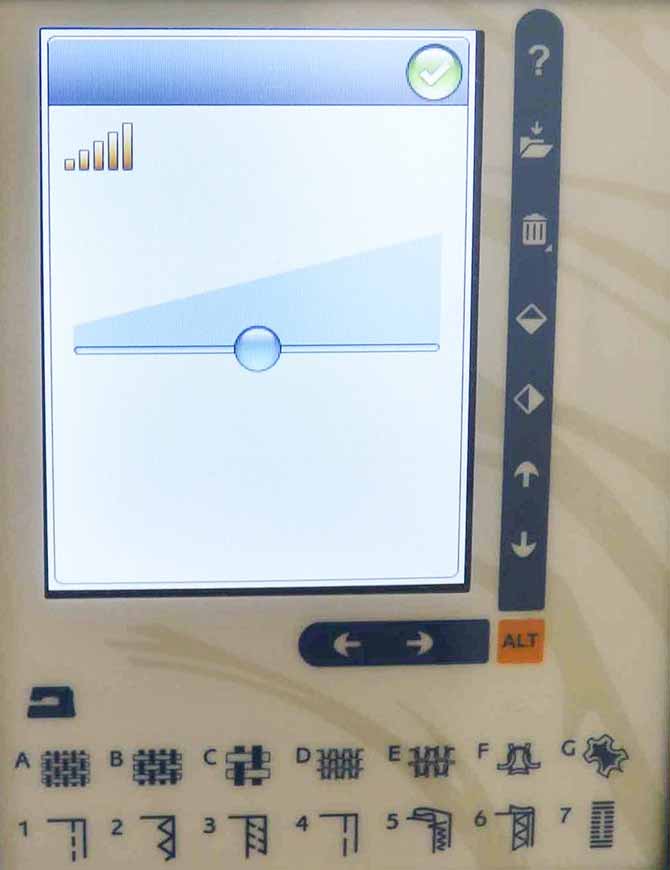 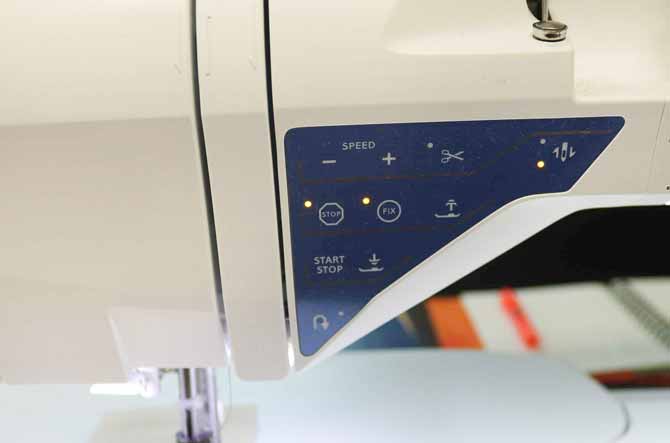 I’ve done the first row of lettering which was the word “topstitching”. Now I want to add the needle size. I programmed 14 into the Sapphire 965Q. If I don’t use the STOP function, I’ll get a continuous row of 141414141414

Using the STOP function will stop the stitching after ONE complete stitch sequence, which in this case is 14. That’s a very important thing to know. Since I’m not using the foot pedal, the sewing machine will start sewing when I hit the START/STOP function and it will stop on its own (after it stitched one complete stitch sequence) because the STOP function has been selected. Super neat feature and very practical. Takes the guesswork out of where to start and where to stop. 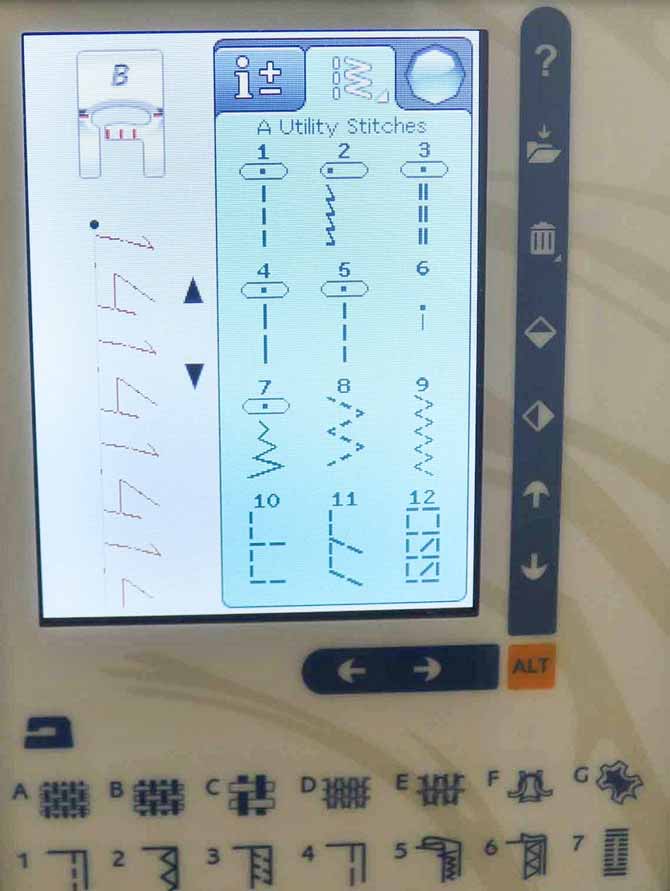 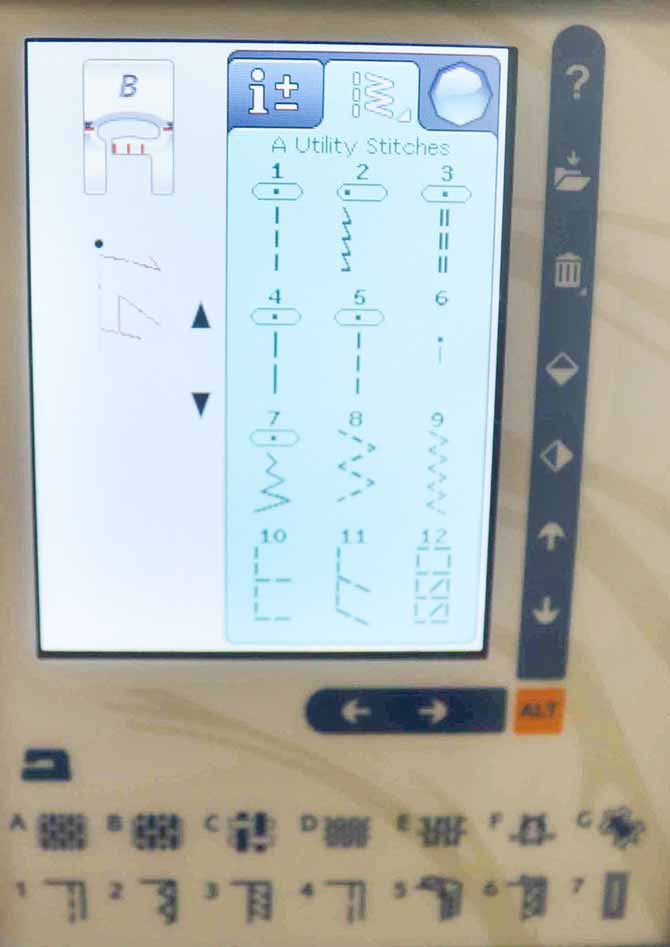 Only one stitch sequence appears on the Interactive Touch Screen

I used a contrasting 40-weight thread so I could read my lettering. A little bit heavier to help define the lettering. I used a topstitch needle because the thread was a bit heavier than I would normally use.

It’s a good idea to do some stitch outs so you can gauge the size. After this stitch out, I realized there wasn’t enough room to put the name and the number of the needle side by side. Again, I wasn’t going for perfection here, but practical and relatively quick.

Stitch outs on a scrap 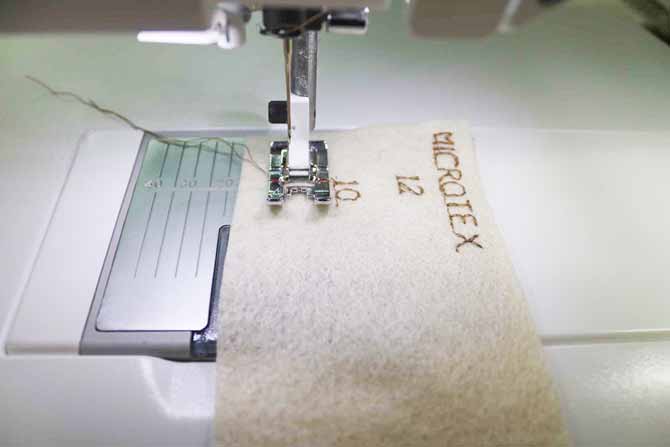 Stitching the lettering on the felt insert

After evaluating which were the most common needle types and sizes, I ended up with four “pages”. I stitched them so they can be placed back to back in the needlecase. Customize your needlecase with whichever needles you commonly use or make one for your hand stitching needles. In my instance, this is strictly for my partially used needles, so there should only ever be ONE of each type and size in the needlecase. 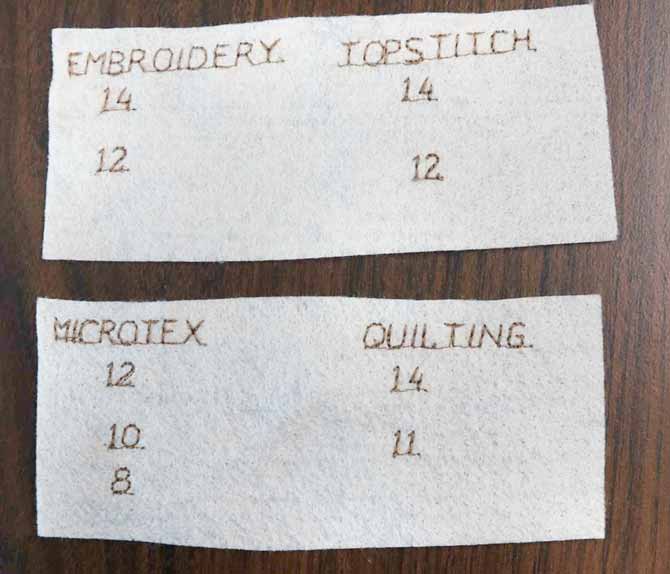 Lettering is complete on both sections of the insert.

To finish off the insert, I wanted to stitch the two pieces together back to back so they created one insert. I used the overcast stitch A10. Here’s another instance where seeing the stitch on the Interactive Touch Screen, the exact way it will stitch on the fabric is very helpful. I can see that this stitch is opposite to the way I want it to stitch. 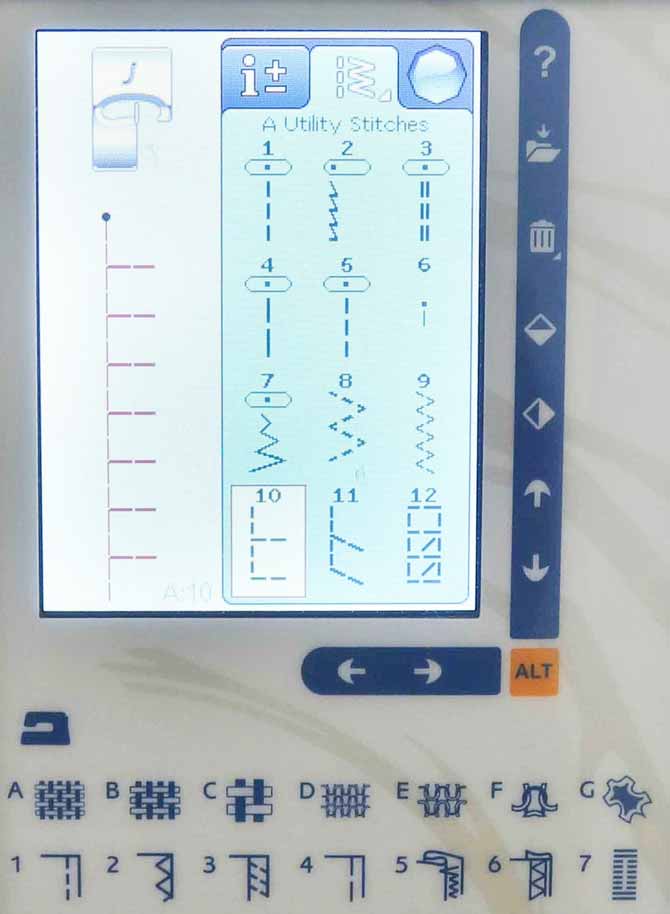 Default setting for the overcast stitch A10

I simply touch a button to mirror the stitch side to side and you can see what happens to it. Now I’m ready to join the two pieces together. 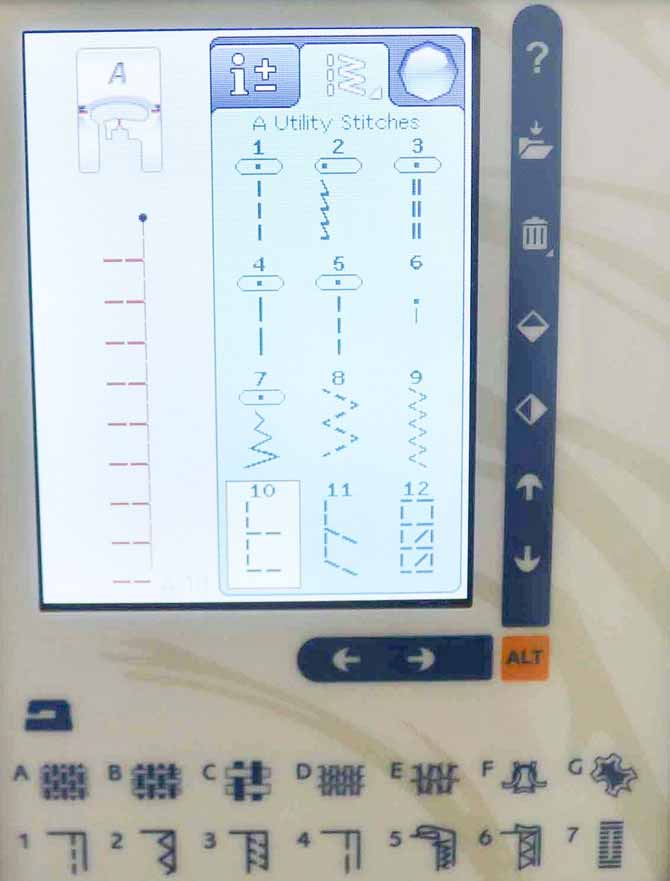 Side to side mirrored overcast stitch A-10 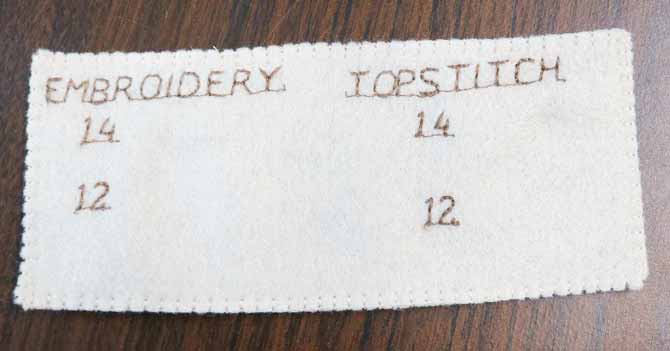 Insert sections are now sewn together

Center the insert page on the inside of the cover of the needlecase. 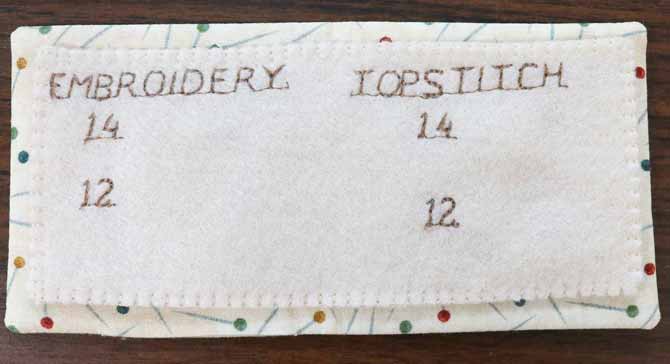 I sewed from the back of my needlecase so I could get that seam somewhat centered. 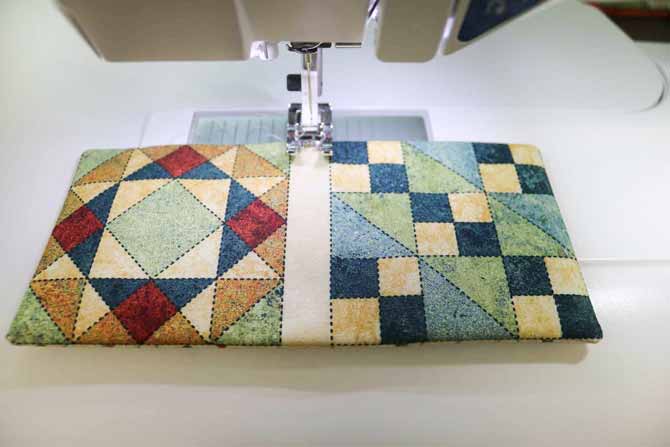 Top stitch the two sections together

And now I have a cute little needle case for the partially used needles. It has locations for all the needle types and sizes that I use. Guess what? The piece of fabric and the tomato pincushion that have been in my sewing machine needle box forever are going to be history! I LOVE my new needle case. 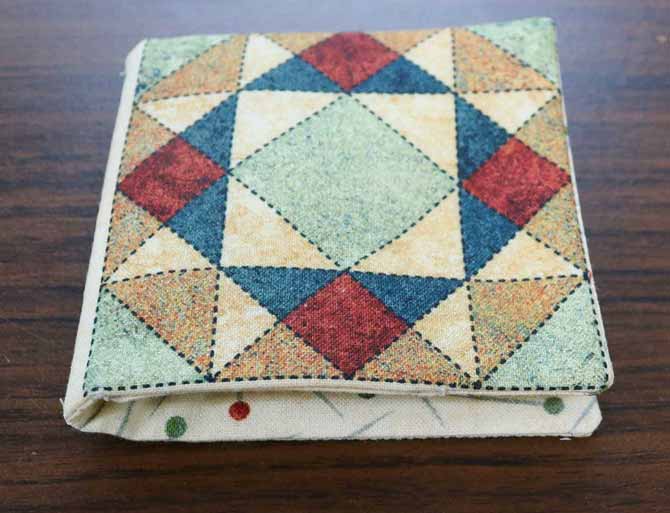 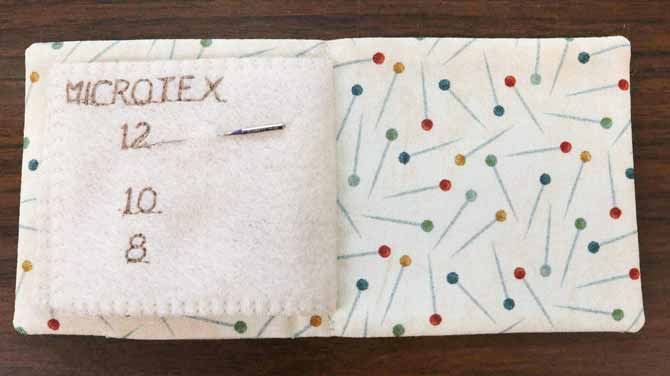 The inside of the Sewing Machine Needlecase

Isn’t that just the cutest little project. I’m thrilled with it. While I was making this one, I also prepped another outer section which I think I’ll customize that one for hand stitching needles.

That wraps up this week of fun and excitement with the Husqvarna Viking Saphire 965Q. I had so much fun and I hope you did too. Not only that, but I hope that you learned a sewing technique or tip along the way.

If you make a needlecase, let me know. I’d love to see what you make.

This is part 5 of 5 in this series.
Go back to part 4:  5 tips for topstitching and its purpose in sewing

4 hints it’s time to throw your sewing threads out

The only time it’s good to trap your thread!

Make it zippy! Use this zany tip to...

What you need to know about sewing the...

5 tips for topstitching and its purpose in...

Key tips on sewing your binding by machine...

Tips for successful sewing on the Husqvarna Viking...

I just purchased a 965Q two weeks ago and have found this series to be quite helpful. This machine is quite different than my 30 year old Viking 990. Thank you for taking the time to build this series! In your journies with the 965Q, did you locate a function on the machine to manually drop the feed dogs?

Love the label maker. How cool.

I absolutely love this. It really is a cute little projects.

5 tips for topstitching and its purpose...

Key tips on sewing your binding by...

What you need to know about sewing...