Welcome back! It’s already the end of the week and where did the time go? Today we’re going to finish up the vintage looking art piece that I started yesterday. I’ll be using some of the great features of the Husqvarna Viking Designer EPIC to finish off the piece. 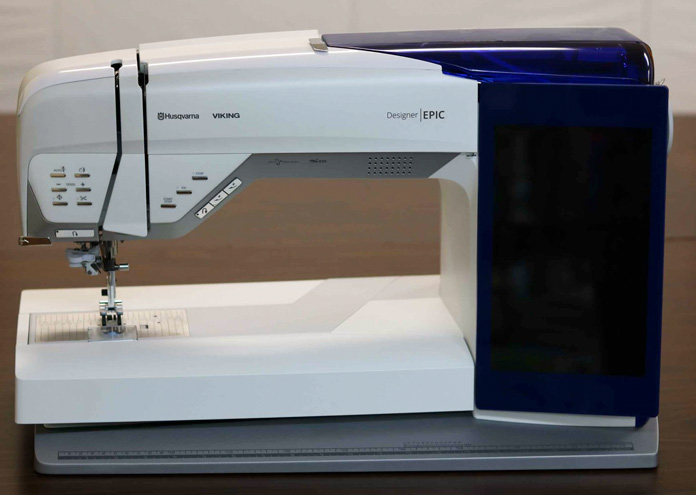 Now here’s the thing. You might be thinking that this isn’t a quilt and I’m not really interested in doing this project. Or it’s small – what the heck would I or anyone else do with it?

While I love to make quilts, there does come a point when you just want a change. No piecing – no applique – no matching of points. It’s so freeing to just have a play date with the Designer EPIC to test out some of the features. And this little piece of art? I have a small gallery in my office and this kind of project is perfect.

It also helps me to grow as an artist and well, you can customize these pieces to anyone of your friends and they make a super and very thoughtful gift for someone. They’re fast, fun and use up some of those odd bits you have hanging around.

If that isn’t enough reason to experiment, well – just get out there and try one.

The embellishments do the trick!

Once the base piece was together and I had done some stitching that you saw yesterday, it was time to find some embellishments. I opened my box of odds and ends of lace and right on top were these two pieces. Hmm – looks like the right color, looks like a good size. They’re being added to the piece.

The best part about making one of these small pieces is that it’s not critical what the final piece looks like. There’s no right or wrong. There’s no wrong placement of the embellishments. This is a great exercise to allow you to trust yourself.

Two pieces of lace ready to be used as an embellishment 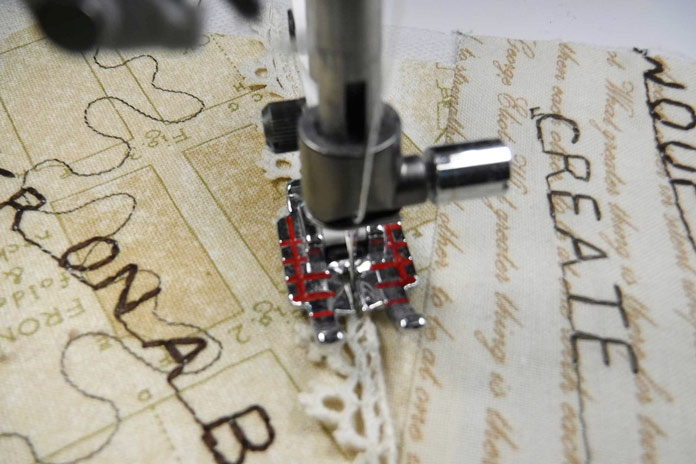 For some reason, I wanted to put a girl on the piece. Why? No idea but I had seen a friend post an art piece on social media and she had a girl on hers. So I copied! Of course, I had to put a bicycle on mine and that key. There’s a story behind that key. First off, I’ve admired keys on pieces of artwork forever. My daughter was notorious for losing the mail key. She lost several and we eventually had to get a new lock put on the mailbox.

Several years after she moved away, guess what? Yep – we found both keys – one in each of our two cars! The key has sat in my cup holder for months and when I started to work on this project, I knew I had found the perfect spot to use the key. Why? No idea – just a good spot to put a key! And this one has a story. Looking at this piece with the key will make me think of all those times that my daughter lost the key! 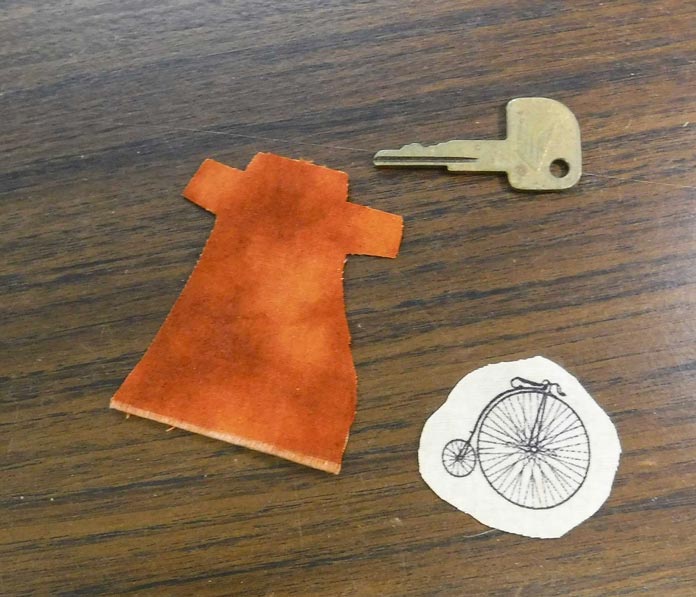 A fabric dress shape, an image of a bicycle printed on fabric and a key to be used for embellishments

I decided to leave the key until the piece was quilted. I always leave the 3-D embellishments until after the quilting. It’s just easier and no danger of breaking the needle on a solid object.

I could have put a fusible on the back of those two fabric pieces to stabilize them, but I wanted this project to be fast and easy. No fusible products allowed. I rough cut both of them with a pair of scissors. It’s fun to do this and no right or wrong. 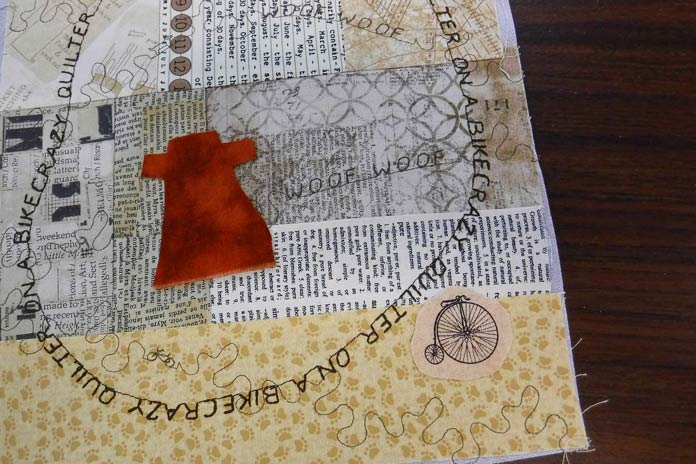 Fabric embellishments are ready to be stitched in place

I decided it was going to be easier to add the fabric embellishments using the Free Motion Foot. I used the Spring Foot and chose the appropriate setting from the Designer EPIC menu.

I started by choosing the setting for Free Motion. The Designer EPIC popped up a menu asking me to choose between floating or the spring action. Once that was selected, the Designer EPIC chose the rest of the settings and dropped the feed teeth. 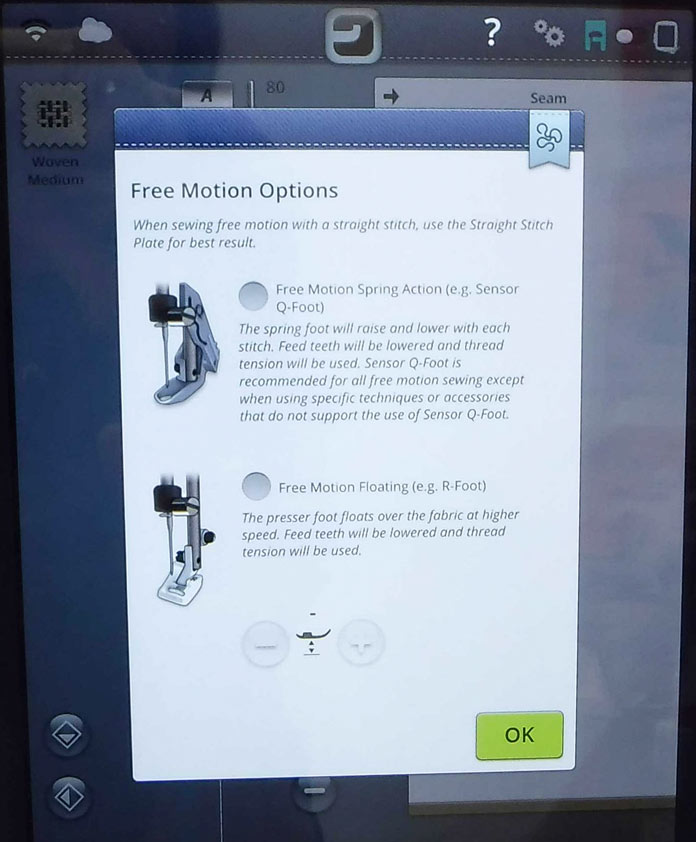 I had one small piece of lace that I didn’t use prior so I added it to the dress. I opted to stitch around the dress with highly contrasting thread, not once, not twice, but three times. Why? It just seemed like a good thing at the time.

Here’s the nice thing about this process. If I don’t like it, no need to rip the stitches out. This project didn’t take long and if I don’t like that style of stitching and the high contrast thread? Then I won’t do it next time. This piece was literally made with scraps so it cost me nothing but a bit of time – FUN time. 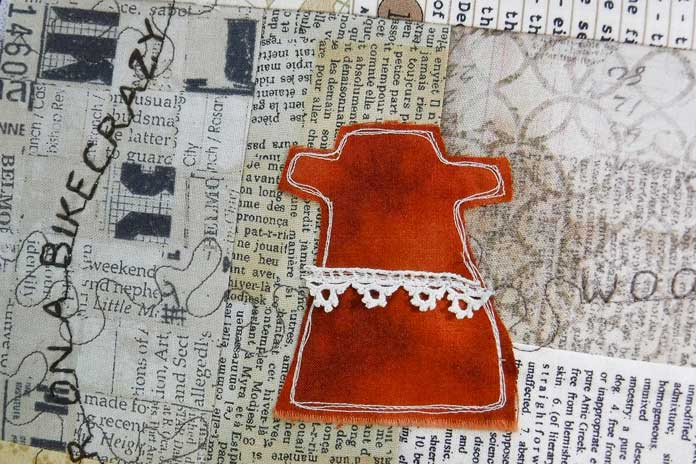 The dress is now stitched in place with contrasting thread

Don’t forget that you should also bring up that bobbin thread through your work so you don’t create a mess on the back. Even though there’ll be a piece of fabric added as the backing, I like to be consistent and maintain good habits through the course of any project. 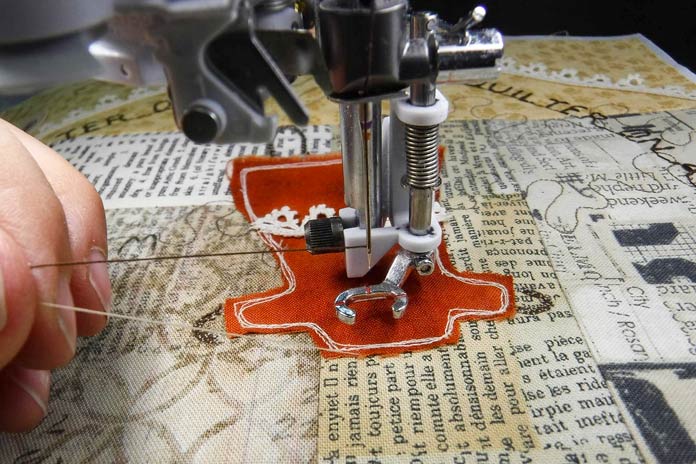 Always pull your bobbin thread to the top of your work

The next embellishments I wanted to add were some buttons.

Out came the button jar – doesn’t everyone have a button jar? I remember my grandmothers’ and mother’s collection of buttons and how it was so much fun to play with the buttons. I would bet that some of these buttons came from their jars! Anyway, I very easily found what I was looking for. They’ll also be added to the piece after it’s quilted.

I also found some buttons for another project that I wanted to work on this weekend. I had no idea I had such small buttons. Who knew? That’s why it’s a good idea to go through your stuff from time to time to refresh your memory of what you have. 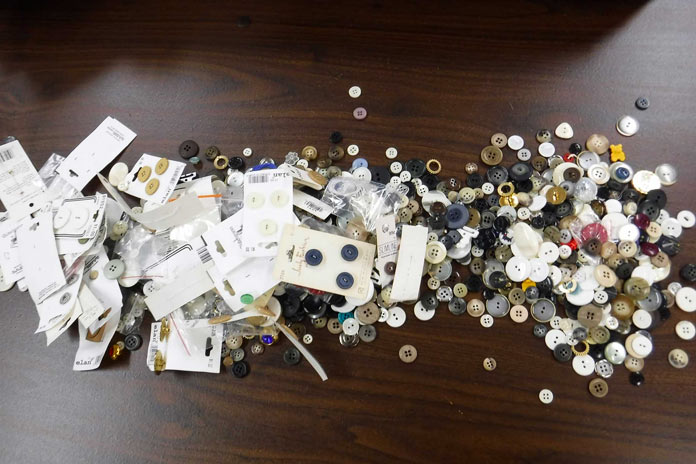 Searching for the perfect buttons

Here you can see how nice the back of the work looks as well. No stray threads, no nests of threads. I’m done all the stitching and embellishing on the top except for the key and the buttons. It’s now time to quilt the piece. 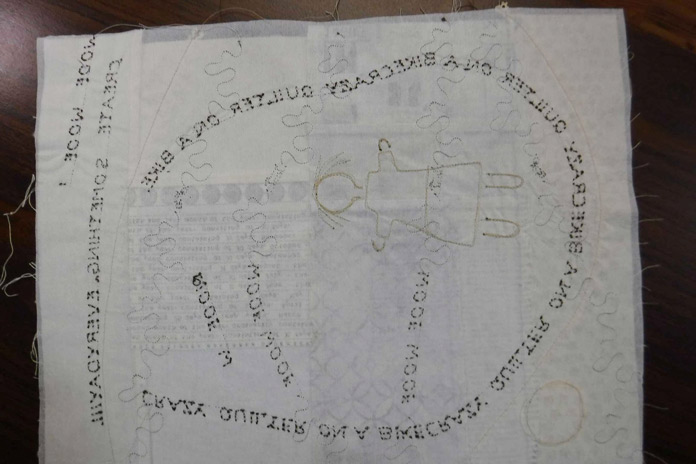 Here’s a great tip for batting. I store all my leftover batting bits with a label that indicates the size of the batting piece. This makes it a snap to sort through the pile of batting bits to find one that’s the correct size (or closest to the correct size) for the piece I’m quilting. 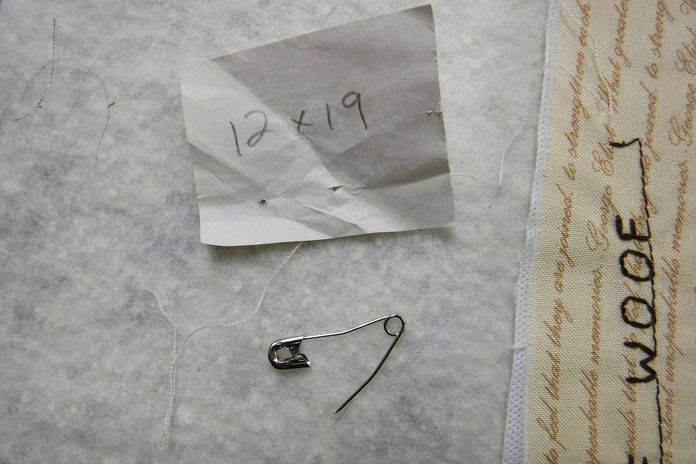 Next up was to quilt the piece. I layered some backing fabric, the piece of batting and the top. Remember there is an extra layer of that fusible interfacing that I put in to stabilize the stitching. It’s no big deal to quilt through that.

The free motion foot was already on the Designer EPIC so I got to work and did some loose quilting in a matching thread. This piece is not about the quilting so just a quick meander over the piece and around the applique to give some dimension is all that was required. Again – we want this process to be fast and easy.

Here’s another great tip for making this kind of piece. The more consistently inconsistent you are, the more perfect your piece will be. If you try to be perfect – perfect applique, perfect stitch length, any mistake will be amplified. Inconsistencies make it perfect. I can’t stress that enough.

There’s an optional extension table, but I didn’t have access to it. No problem, the bed of the Designer EPIC was large enough to easily accommodate the size of my piece. 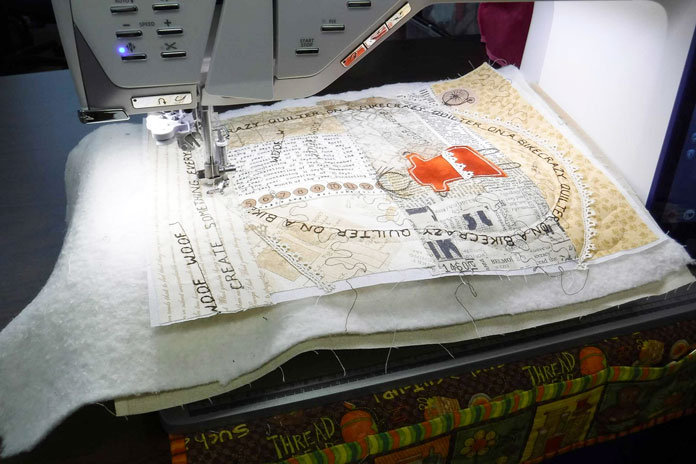 I created a hanger for the back by using two squares that were folded on the diagonal and added to the two top corners. 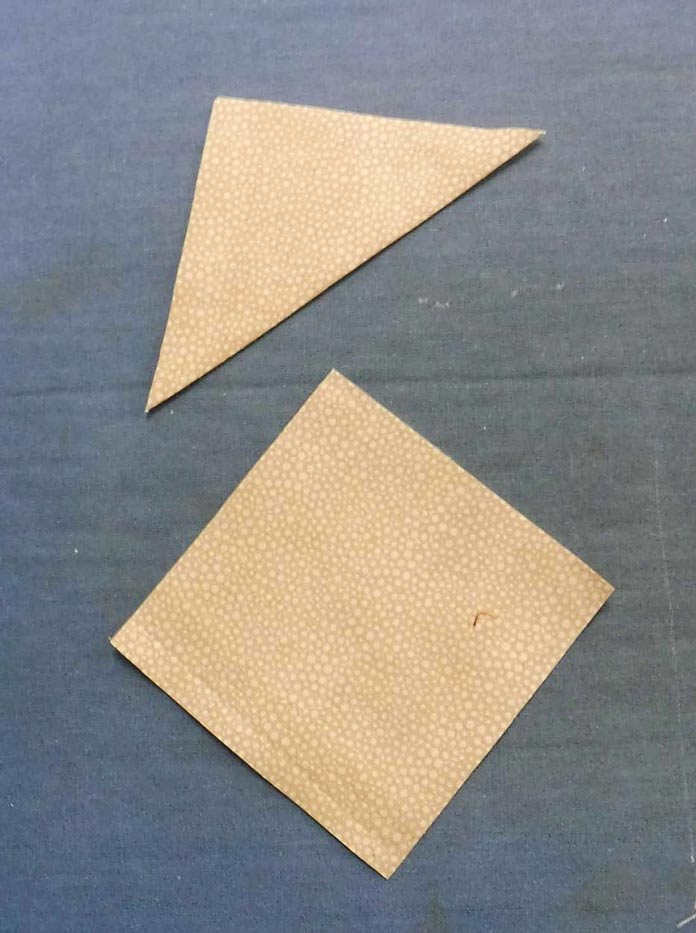 The piece is quilted, trimmed and the binding is on. All that remains is to sew those embellishments on. And I’m going to use the Designer EPIC to sew them including the key. 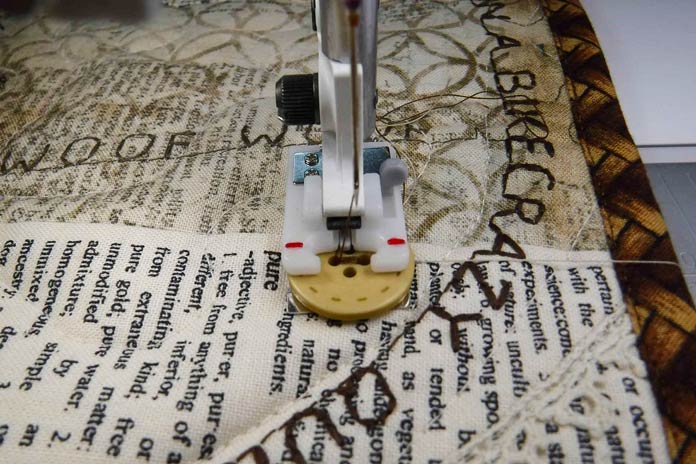 Using the Button Foot to sew on a button

One thing about sewing on a button with the sewing machine – I go SLOW. I set the Designer EPIC to a zigzag and manually test the width of the holes. And once I’m happy that the needle will zig and zag into the right spots, I use the foot pedal to tap out one stitch at a time. I’ve never broken a needle stitching on buttons or other odd objects. The key is to always test the settings manually and go slow.

I stitched the button down in one direction and then shifted the piece to stitch across the first line of stitching to form an X on the four-hole button. 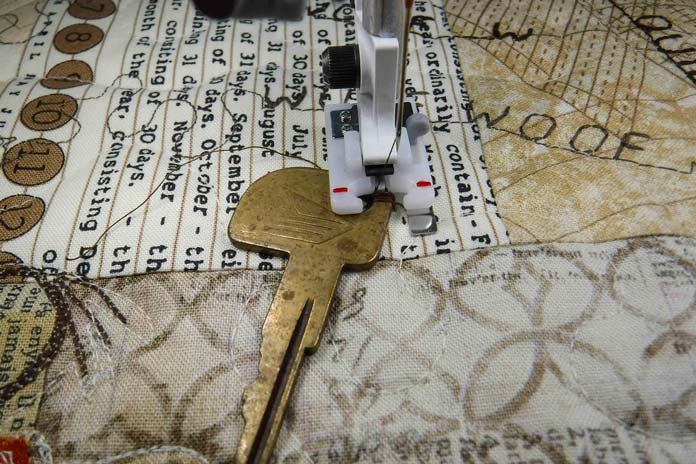 Stitching down a key with the Button Foot

Here’s the finished piece. I’m so very happy with the piece and I used a lot of features and techniques on the Designer EPIC to speed up the process. I feel that I learned a lot and the next time I make something like this, it’ll be easier. Easier is good! 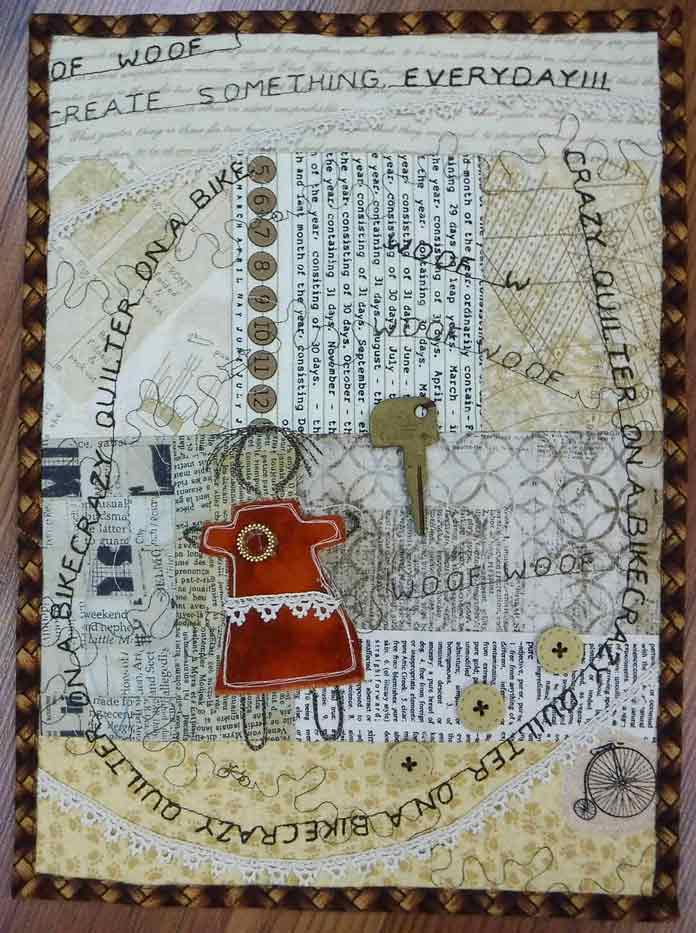 And that brings to an end, another great week using the Husqvarna Viking Designer EPIC sewing machine. I learned some new techniques, I used my imagination to stretch the use of a few of them and I feel that I really got a chance to test some of the capabilities of the Designer EPIC.

I’ll be back in a couple of weeks with more great tips. In the meantime, have fun! If you make a small art piece, please post pictures on our QUILTsocial Facebook page! We’d love to see what you’ve created.

This is part 5 of 5 in this series.
Go back to part 4: Combining stitches to create a quilted art piece

1 easy way to add a quilt binding, 2 WonderFil threads to make it shine!

6 steps to creating an embroidered quilt...