Since I didn’t fold over the edges of my pieces on any of the shapes I made with the Carefree Curve templates the last couple of days, I now need to find a way to secure the edges so that they do not fray or lift. I could use a stitch such as satin or blanket to secure each piece in place but those won’t stand out very well. I want something to stand out and create an edge on the curved shapes I created, so I’ll use fusible bias tape to edge each piece. I could buy fusible bias tape or I could make my own to match the fabrics exactly, since fusible bias tape is easy with the Clover bias tape maker.

First things first is to choose the fabric that I want to make the tape with and dark teal matches the deep teal in the feature fabrics. It also goes well with the dark brown background. 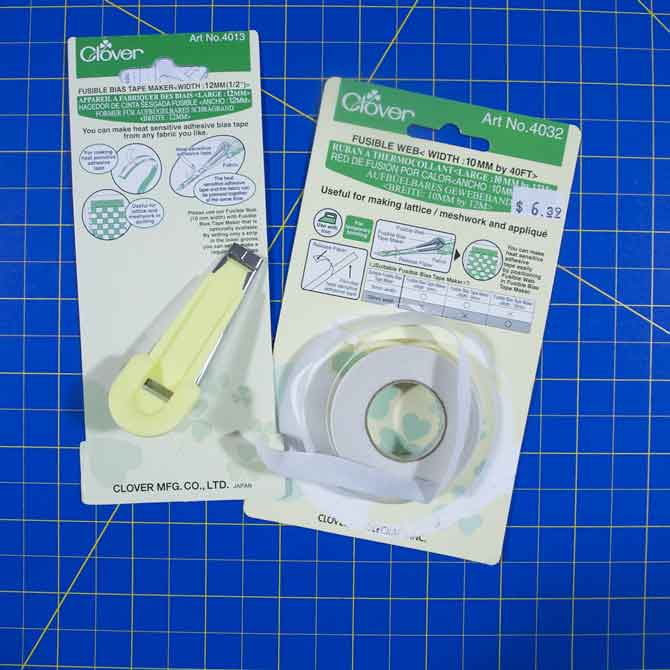 The best part about making my own bias tape is that I can have it in any fabric and any color I want. The ready-made fusible bias tape comes in very limited colors.

To begin I need to cut some bias strips at a width of 15/16″ – just under an inch. The packaging for the tool gives the width to cut for bias and straight. I have to make bias tape as I’m going to be easing it around curves and the bias tape is much more ‘mouldable’ than the straight tape to curves.

To cut the strips I use a square piece of fabric. This one I just happened to cut at 20″ as I know I’m going to need a bit of fusible bias tape. I thought I would work small for this week’s project and once again I’m working at a larger size. Well, I’m going to blame it on the templates because the smallest they went was 6″ plus I didn’t want any feature fabric left.

Trim off one corner at a 45° angle and then cut the strips at the desired width. 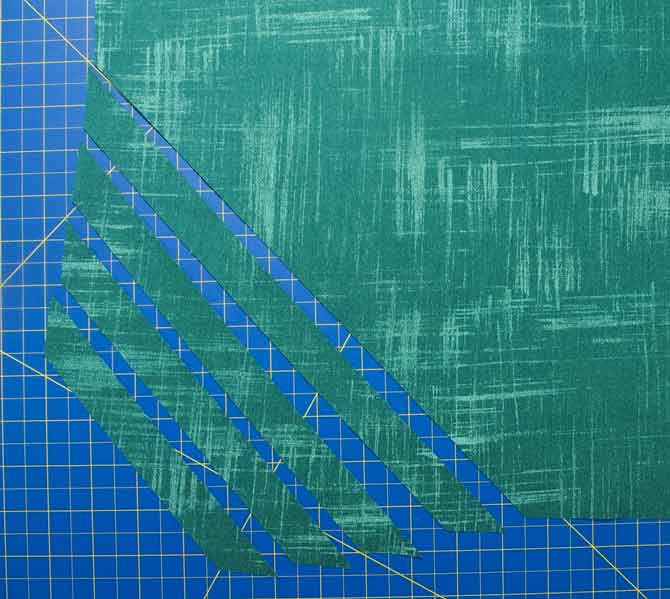 Once all the strips have been cut they need to be sewn together to make one long continuous piece. Place together at right angles with right sides of fabric together and a quarter inch hanging over each end. Sew with a quarter inch seam allowance. Press and trim off the dog ear.

Step 1: Feed the fabric through the bottom hole on the fusible tape maker. It feeds through much easier if the fabric end is pointed. Sometimes the fabric gets stuck. If it does turn the tool over and there’s a slit in the bottom that a pin can fit in and push the fabric along. 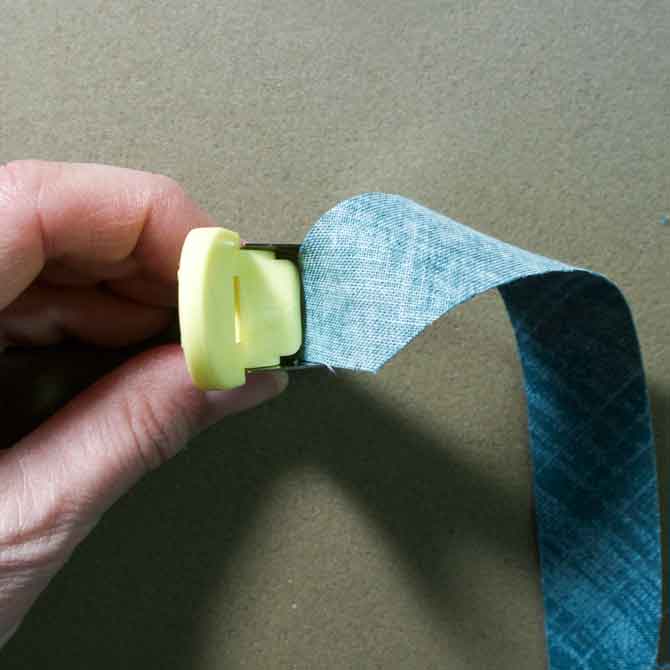 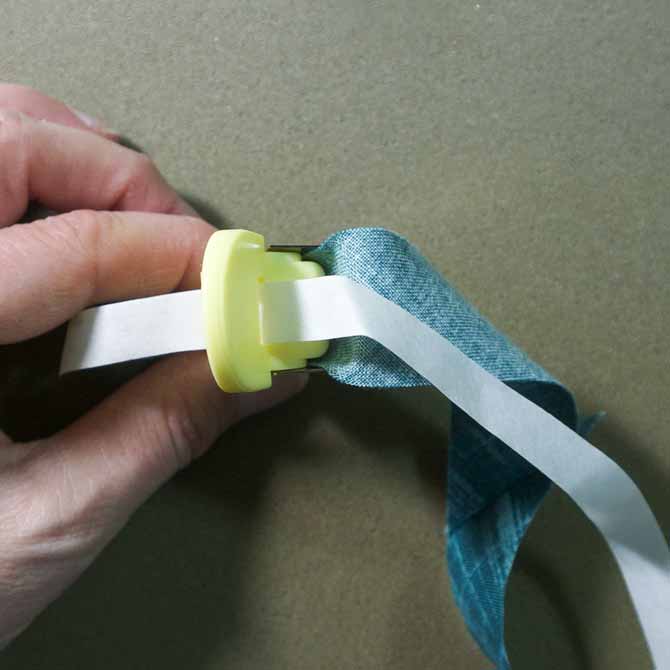 Fusible tape being fed through the top hole

Step 3: Feed the pointed end under the metal bar above the fabric. 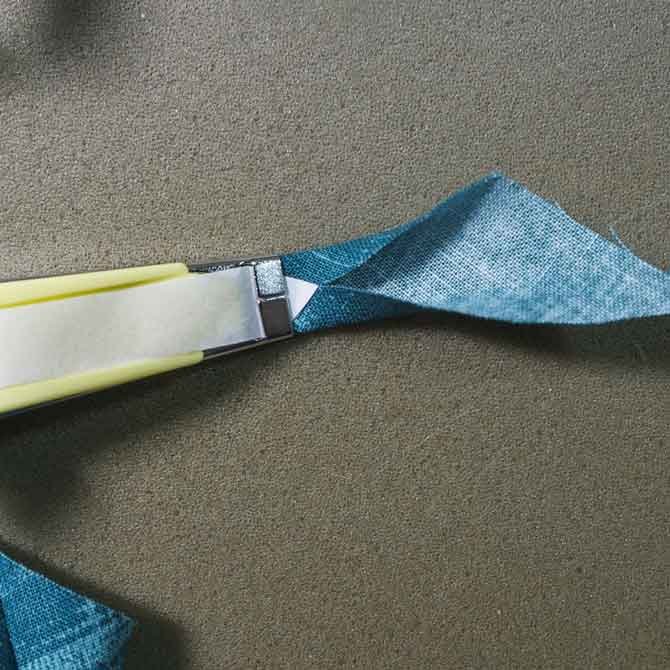 Step 4: Lay the fabric on the ironing surface with the fusible tape centered on the fabric. I like to use a hot iron with steam. Caution though as the steam does billow up around the tool and fabric.

Step 5: Lift the tape maker up at a slight angle to the ironing surface and drag it backwards. This motion will feed out the tape and fabric together. At the same time that the tape maker is being dragged backwards with the iron towards the tape maker to fuse the fusible tape to the fabric. 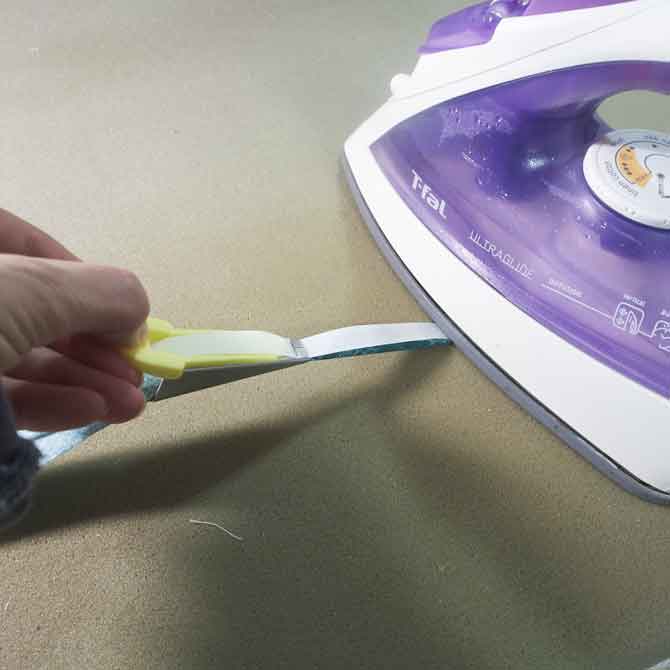 Tip: It is best to go slow otherwise the fabric can go askew as it is in the top of the picture below. At the bottom of the picture is how the fusible bias tape should look. 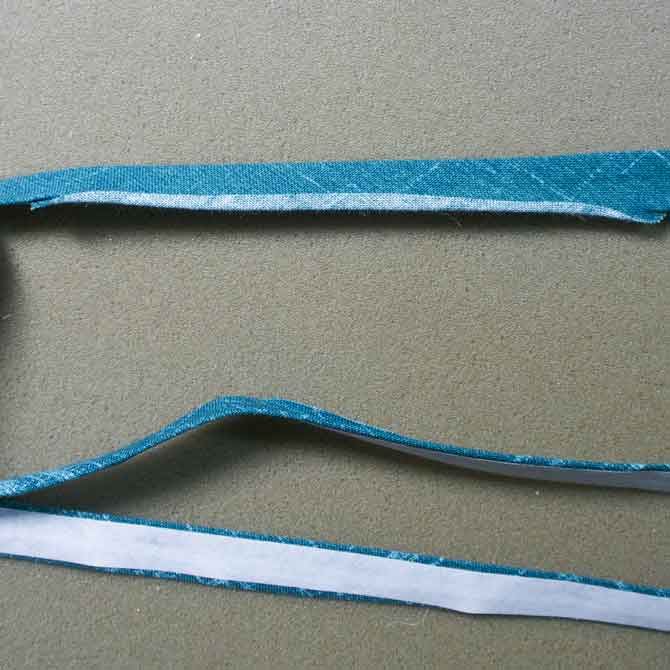 Bias tape made – some areas not as smooth as others

Peel back the paper on the bias tape to reveal the glue which is shiny. 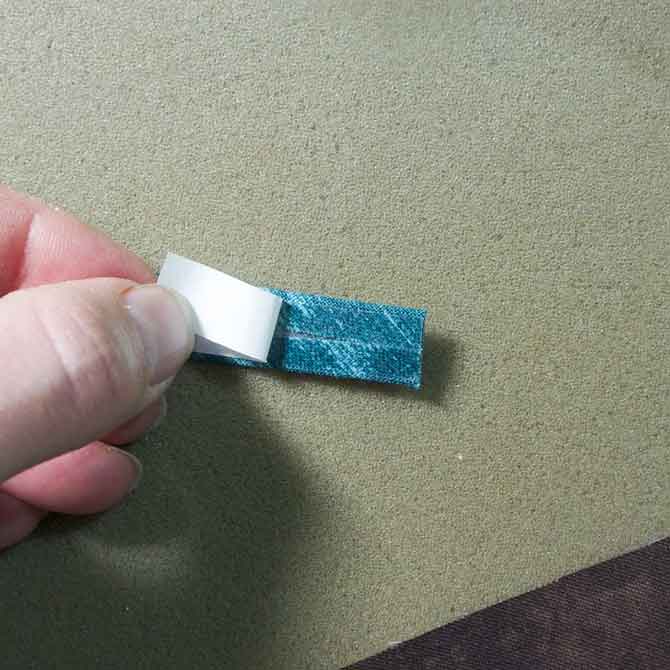 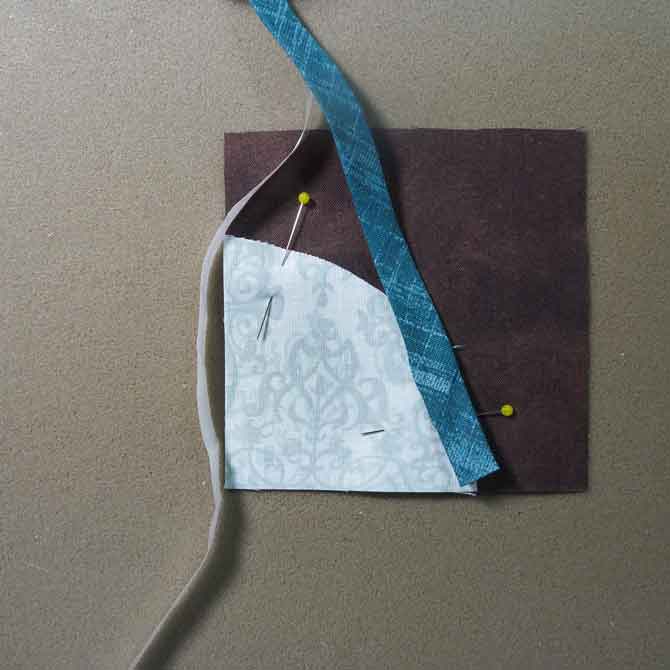 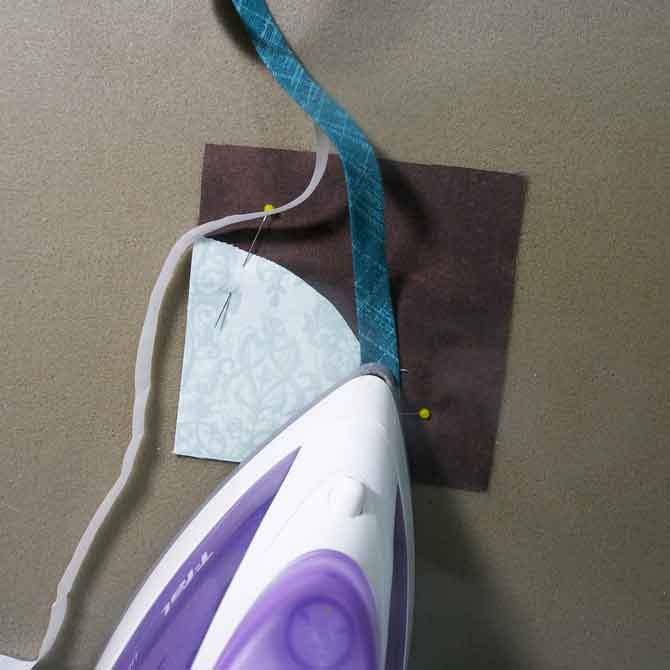 Use a hot iron to secure tape to curve

Sew the bias tape in place with a matching or contrasting thread depending on the look you want. I used a lighter colored rayon thread from Sulky as I wanted it to stand out on the dark teal bias tape. I also used three rows of stitching since the bias tape is a ½″ wide. 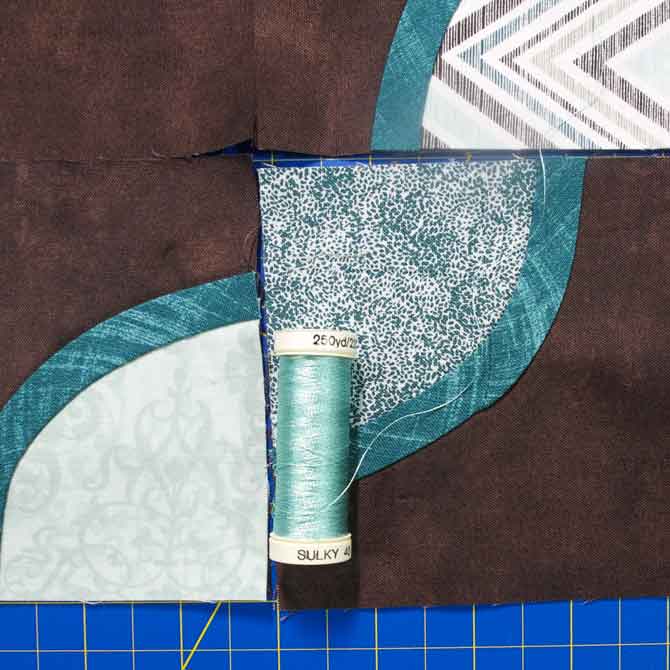 Here’s one of the ¼-circle blocks sewn together as well as a circle block.

Notice I have a few dangling thread ends on the circle that I’ll get to use my favorite self-threading needles and pull to the back of the block to secure and hide from view. Most people think I’m absolutely crazy to enjoy pulling threads through and hiding them but I find it very relaxing especially while watching my favorite movies.

Wow, it has been a busy week and I’m not done the project yet. But I did decide to use the circle, ¼-circle and fan shapes for this project. Here’s a picture of what I have come up with so far. I even did a good job of using up the feature fabrics with very little left over. My scrap bin will be happy to take what’s left.

Blocks laid out on the design wall

I’ll be back next month with the finishing touches like quilting, embellishing and binding along with adding the bias tape to all of the curves. Fusible bias tape is easy with the Clover Bias Tape Maker and any fabric in any color can be used – perfect for customizing your work. Happy Quilting!

8 tips for decorative stitching with the Designer Jade | 35

The secret to perfect alignment on a 6-point...

16-patch diamonds are easy with the ESSENTIAL Sew...

Easy 6-point stars without Y seams: What you...

Measure, Cut, Trim! How to frame a fabric...

I have always seen these little gadgets in the notions section and wondered how they worked. Now I know and I can’t wait to get one! Thanks for the demo.

10 easy steps to the perfect quilt...