How QuiltBroidery adds stipple quilting around an embroidery design 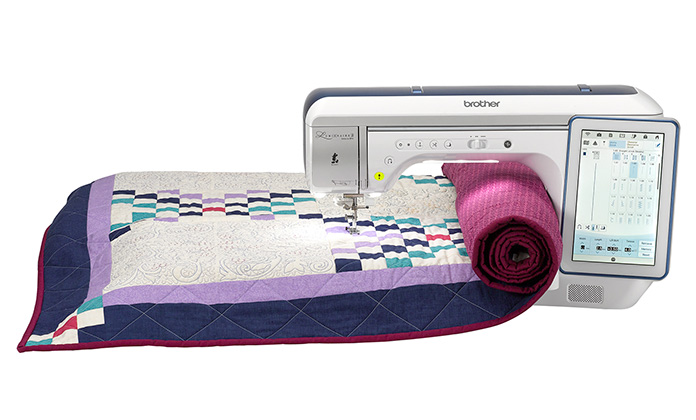 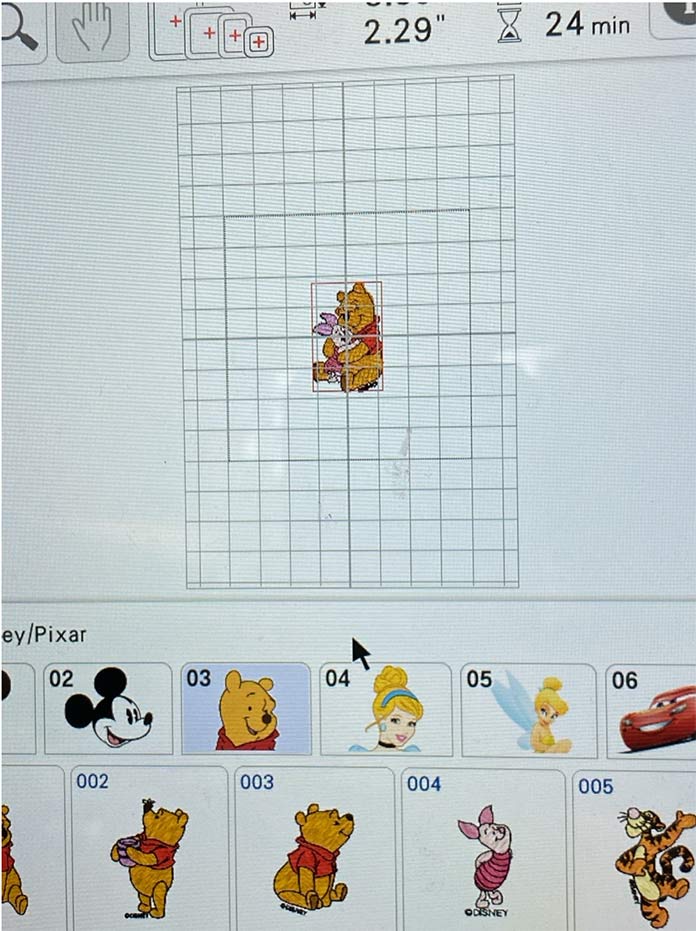 2. From the Edit screen, select the Fill Selection icon (it looks like stipple) and then access the Decorative Fill stitches. With 35 decorative fills to choose from it was a hard decision, but I selected this curved design in a 5″ x 7″ frame to surround the embroidery design. 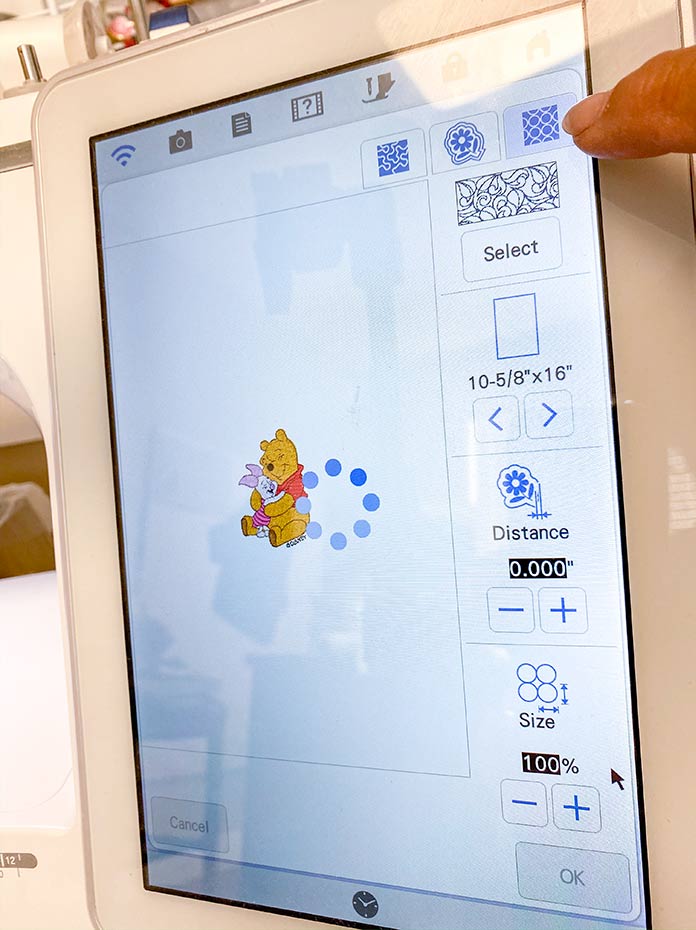 3. I adjusted the distance away from the embroidery design that the background fill would start stitching, and the size of the decorative fill stitch – all from the same screen. 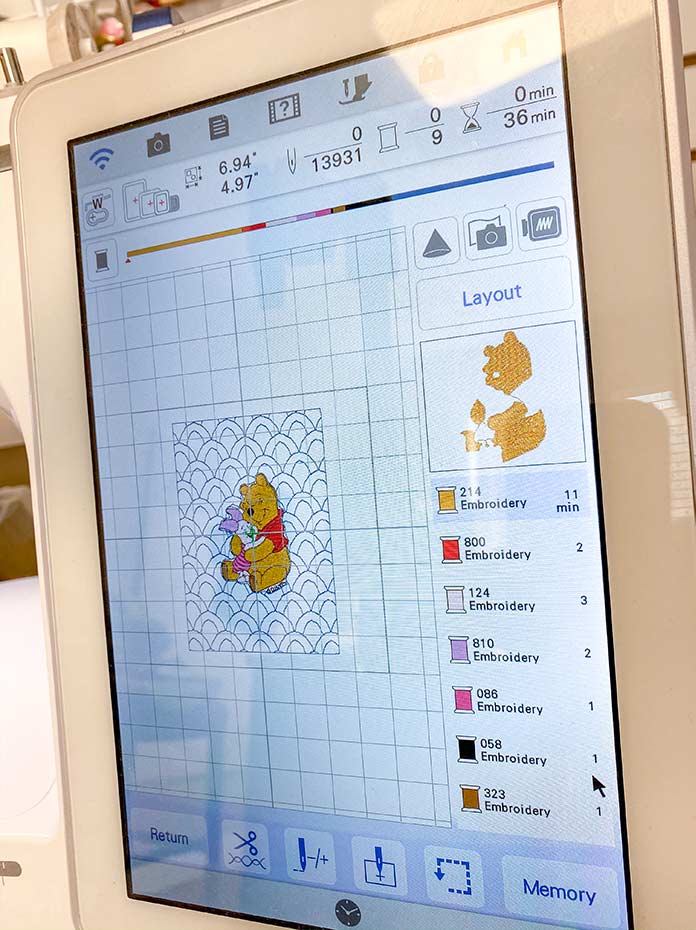 Winnie the Pooh with decorative fill ready to stitch out

4. Touch Embroidery and watch the quilt block stitch out. 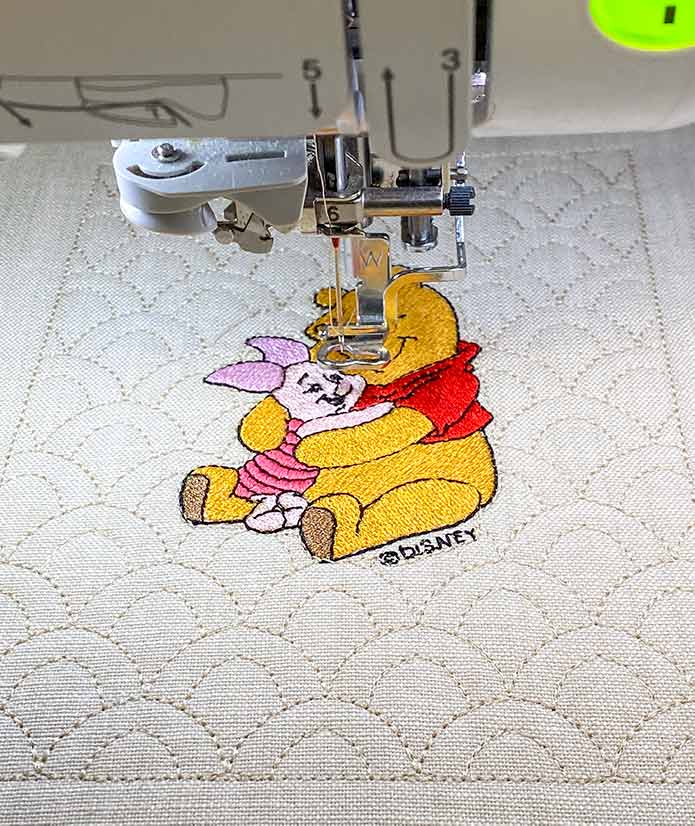 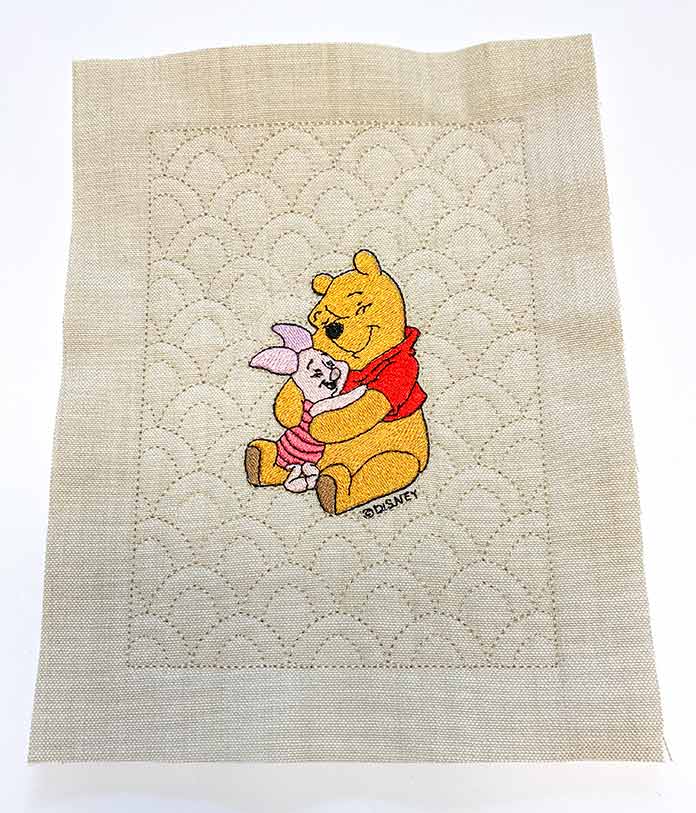 I’m so pleased with how this block turned out! My plan is to embroider several more Winnie the Pooh blocks using the built-in designs on the Brother Luminaire 2 Innov-ìs XP2, and turn them into a quilt.

Join me tomorrow when I show you another way to QuiltBroider quilt blocks using the My Design Center, the Brother Brother Luminaire 2 Innov-ìs XP2 and QuiltBroidery!

Go back to part 1: Discovering the QuiltBroidery feature on the Luminaire 2 Innov-ìs XP2

Go to part 3: It’s so easy: decorative quilting on the Luminaire XP2

Lynn is a quilter, embroiderer, sewer and an overall ‘maker of things’…. she has been having fun with fabric and fibres for most of her life. Ten years ago after a career as a Corporate Trainer and Instructional Designer Lynn joined Brother Canada and has been training Brother Dealers and customers on Brother Sewing and Embroidery machines, digital cutters and software since that time. “I get really excited helping people discover what they can create with our machines, and how much fun they will have at the same time”. says Lynn. You can be sure her classes are FUN, informative and entertaining. Lynn is a regular contributor to ‘A Needle Pulling Thread Magazine’, ‘Brother blog’ and is member of the Fraser Valley Modern Quilt Guild. She is also a quilter, knitter, an avid golfer, curler and yogi.

Completing the Growth Chart on the Brother Luminaire...

How to add letters to an applique with...

Quilting in the hoop with the Brother Luminaire...

Creating a Disney gang growth chart with the...

Setting up for embroidery on the Brother Luminaire...

How to add color fill to an embroidery...

Changing the outline of a design on the...

How to create an applique on the Brother...

Get help with thread color selection on...

Setting up for embroidery on the Brother...

Changing the outline of a design on...