How to overcome your fear of piecing blocks with random fabrics

Yesterday on QUILTsocial I outlined 6 steps I follow when I’m getting ready to go on retreat or for a sewing day with my friends.

All my Full Bloom fabric from Northcott is cut, so today I’m sewing together my quilt blocks and I’m going to help you to overcome your fear of piecing with random fabrics. Let’s go! 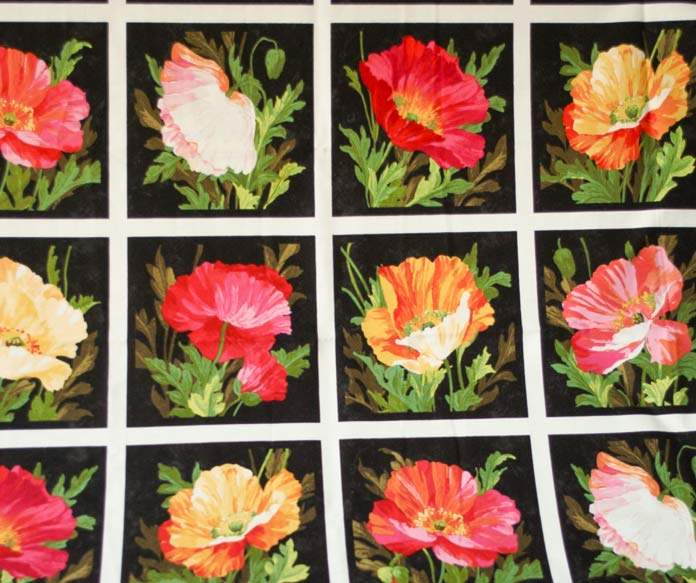 When I design my quilts I often use a large assortment of fabrics and sew my blocks together with randomly selected fabrics. I never realized that this type of sewing caused distress to other quilters until I taught my It’s Been a Slice pattern at my local quilt shop: 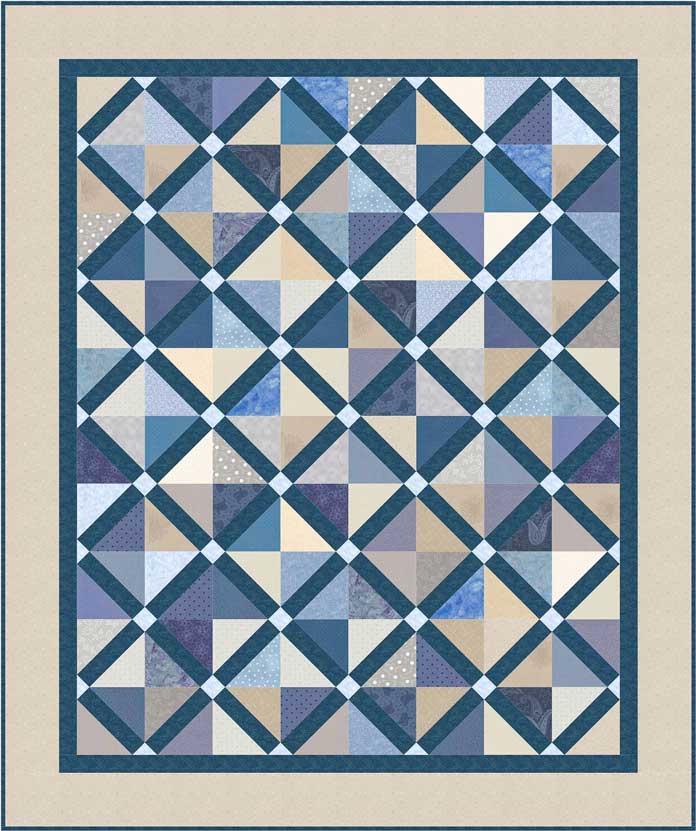 It’s Been a Slice quilt pattern

This pattern uses a layer cake along with fabrics for the sashing, cornerstones and borders. I told my students to just randomly sew triangles together until they had no triangles left. I thought this was a simple thing to do, but I was surprised by how many people felt that they had to lay everything out first before sewing. That definitely isn’t WRONG, but it was so different from how I approached the piecing of the quilt that I was really surprised.

So today I’ll go through the steps I usually follow when piecing “randomly”. By that, I mean that I’m intentionally NOT making all of the blocks the same and NOT planning any of the placement ahead of time. 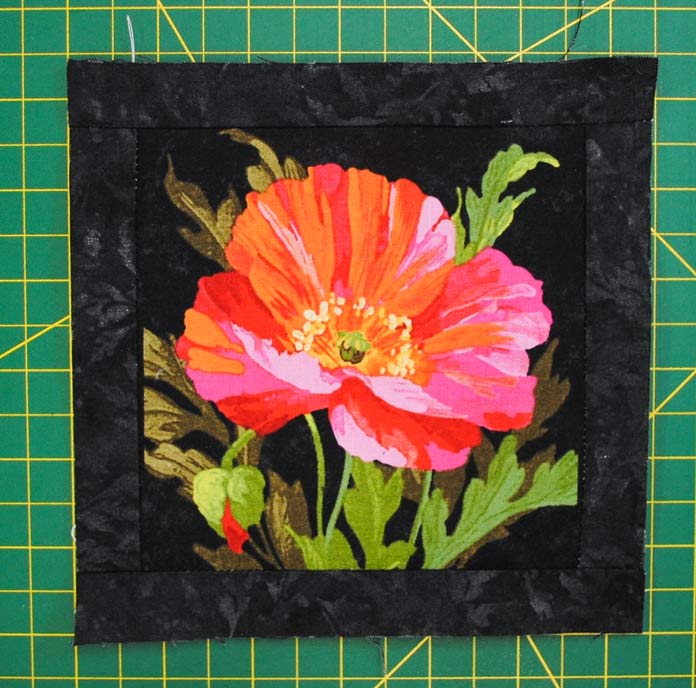 The first step is to throw all of the colorful 2½” strips cut from the Full Bloom fabric into a big pile! 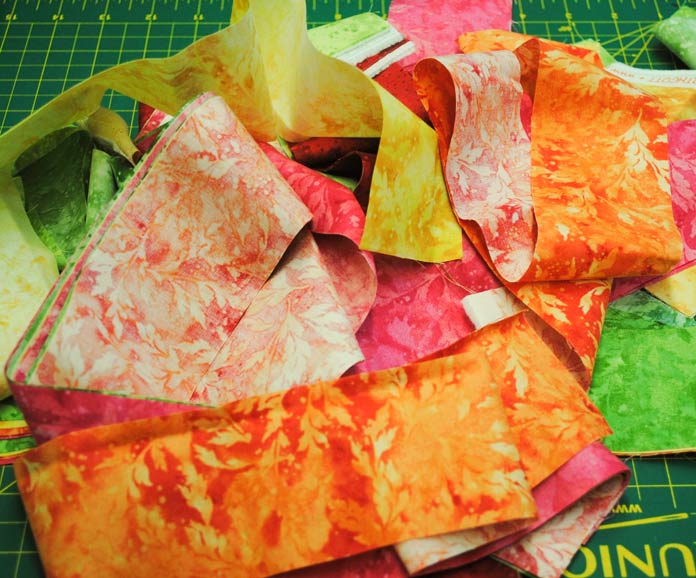 The pile of strips

Start pulling strips from the pile and sew them together. Don’t sew two together that are the same fabric or two that are very similar in tone (for example the two yellow fabrics). Sew five strips together and repeat to make a total of five sets. As you can see – none of my strip sets are alike. 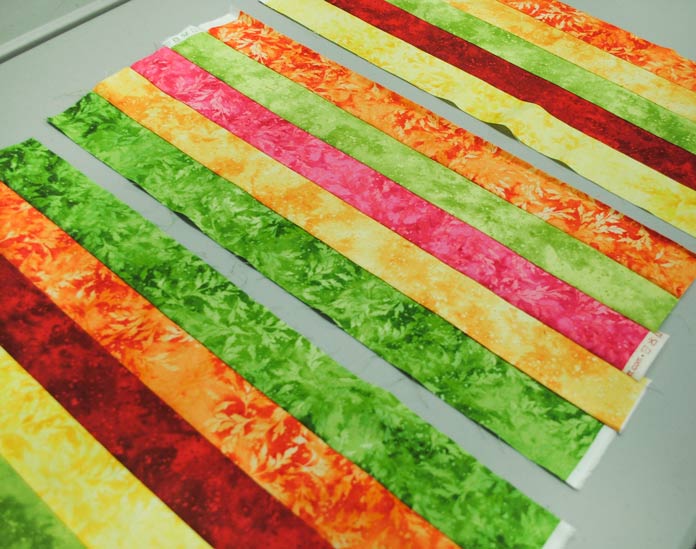 The strip sets sewn with 5 strips

The outside seams of these strip sets are pressed towards the center of the set. The remainder of the seams can be pressed either direction. 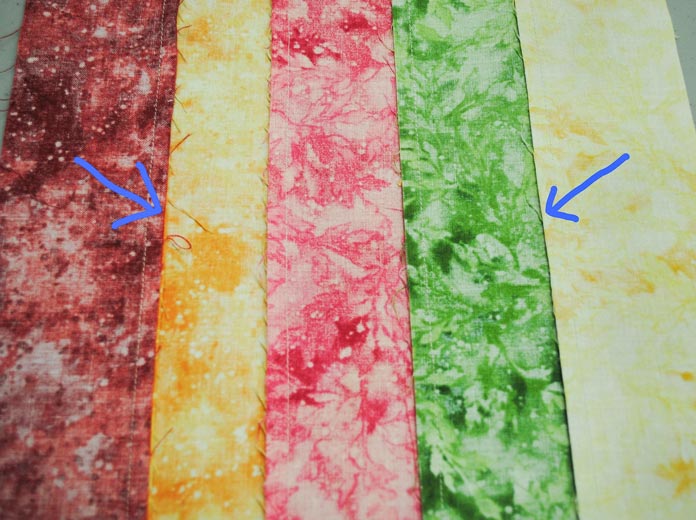 Repeat this process to make five sets of strip sets that have 3 strips each. 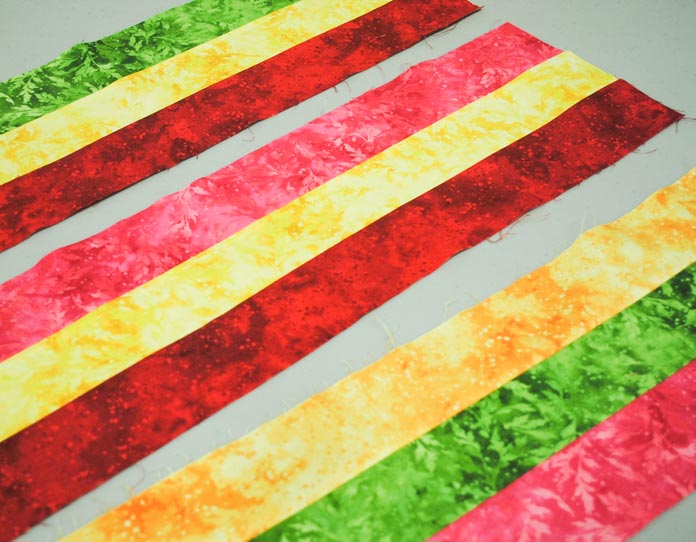 The strip sets sewn with 3 strips

All of the strip sets are then sub-cut into sections that are 2½” wide. 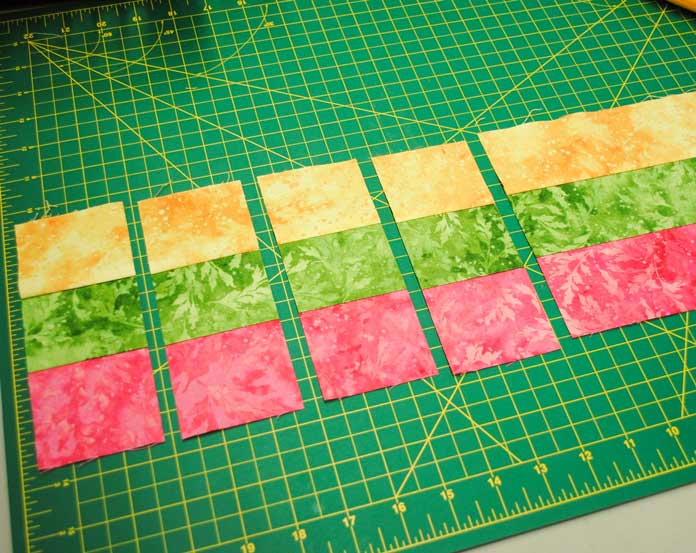 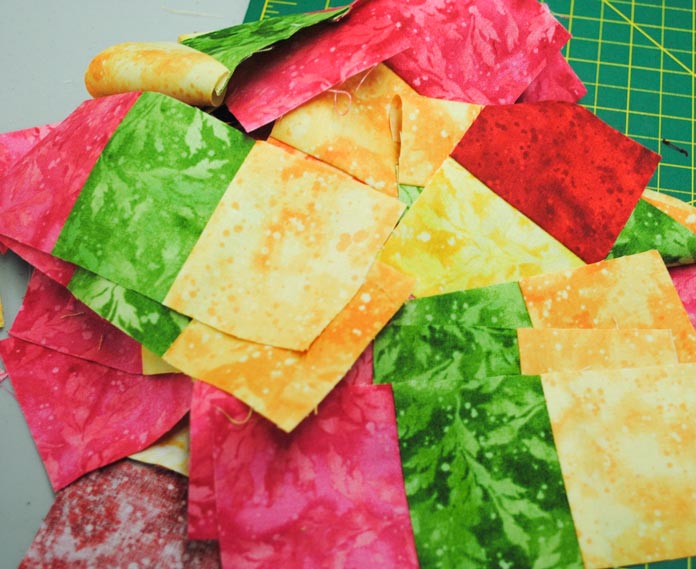 The pile of strip set sections 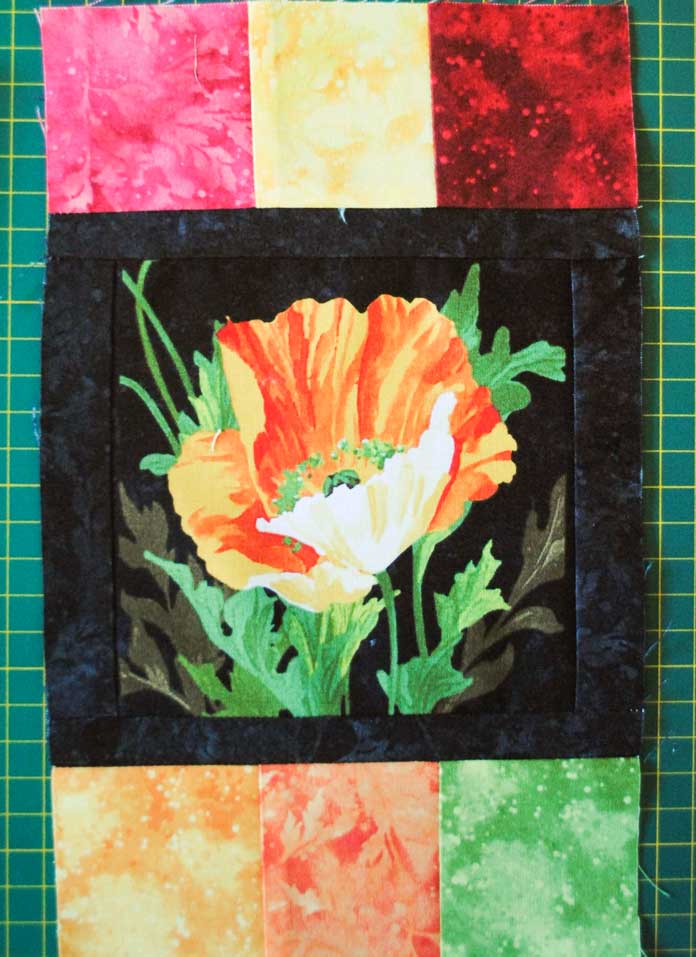 Top and bottom sets are added

Now randomly pull a strip set from the “5” pile and preview it on the right side of the block. As you can see, the first strip selected for the side has the same red fabric at one end as the top strip. Even though I’m sewing “randomly” I wouldn’t sew this together as shown. 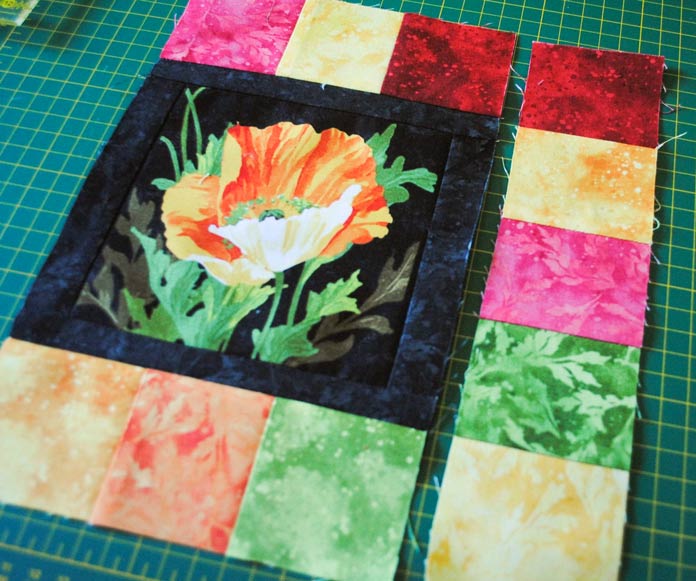 Preview the first side

Instead, I would flip the strip end and preview it that way. As you can see it’ll now work perfectly for the first side of the block. Sew and press towards the pieced strip. Since we pressed the outer strip on our “5” sets towards the middle, the seams should nest up perfectly! 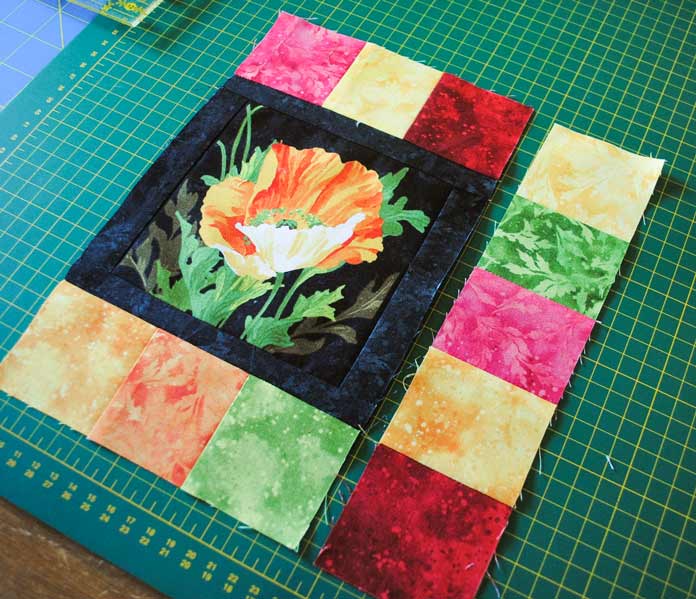 Next randomly select another “5” strip and preview it against the left side of the block. Even though the squares that are beside each other on the bottom left of the block are not the same fabric, they’re too close in value. So I flipped it end for end and sewed it to the block.

This type of thing happens a lot when making scrap quilts with lots of different fabrics. Even though two fabrics may not be the exact same print/color, they may be too close in value to give contrast. So squint your eyes when you look at them beside each other to see if there’s enough contrast. If not, swap one out for another fabric. 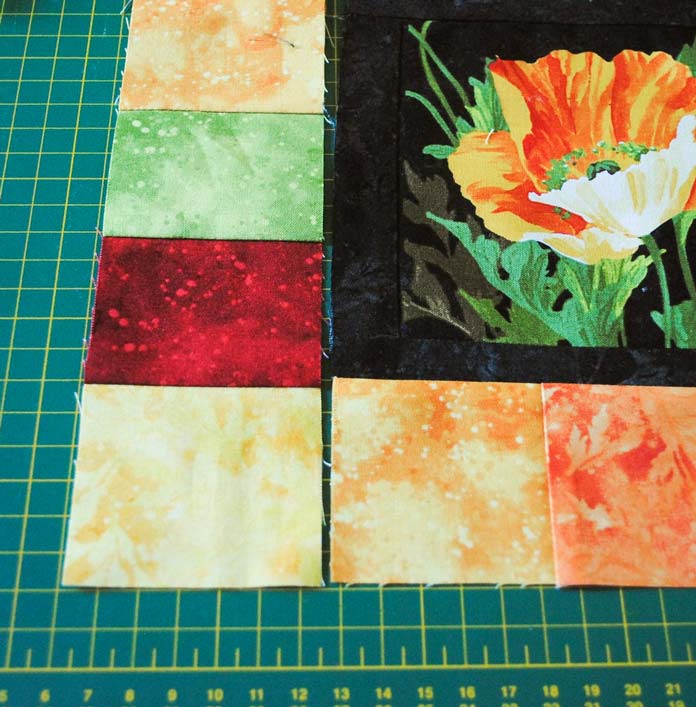 Preview of second side strip

Here’s the first finished block made with Full Bloom fabric. 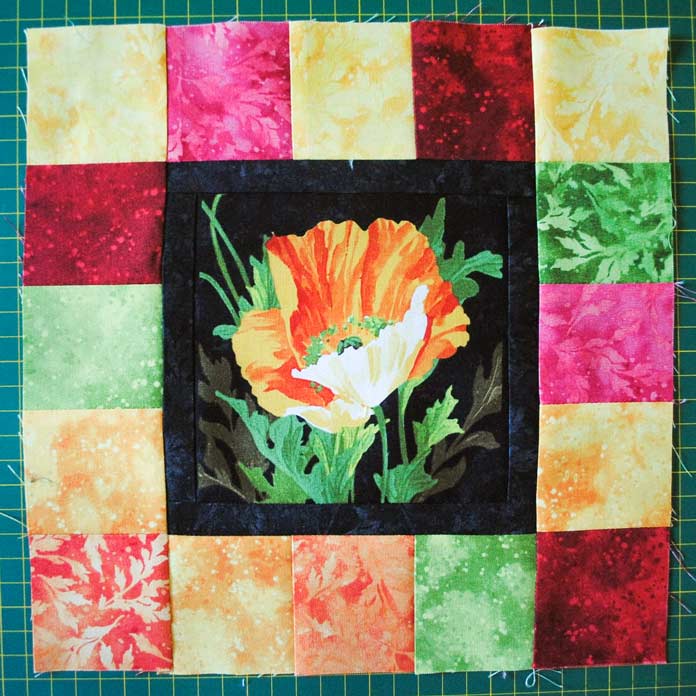 Now we just have to repeat that process using the remainder of the flower squares to make a total of 20 quilt blocks. Once you see how the blocks all look when sewn together, you’ll see that the quilt is SO busy, you can’t tell that you didn’t spend HOURS arranging all of those 2½” squares!!

Tomorrow we’ll sew the blocks together with the sashing strips and I’ll show you two of my favorite ways to add a pop of color to your quilts.

This is part 3 of 5 in this series.
Go back to part 2: 6 steps to get ready for a quilt retreat

Go to part 4: How cornerstones and flange accents add a pop of color to your quilt

6 steps to get ready for a quilt retreat

Hi there, making “random” blocks is causing me anxiety too! Lol! I guess I am more of a planner than I realized. I started an inverted sawtooth or charmed star quilt and began my randomly placing my colour squares and then I began thinking that maybe they should be in a regular pattern or rotation rather than “random”. Like you, I have been looking at the blocks and just trying to make sure that the same or very similar colours aren’t touching. What do you think?

Wow this is interesting , I love mixing colours and prints

Sometimes fear of randoms are when the most beautiful creations happen.

That is so true Stephanie!

Nice and neat tricks, thanks.

You’re very welcome Anna! Thanks for reading the post!

I like that you have pointed out that you don’t give up every choice to randomness. Positioning fabrics so there is contrast makes sense.

Yes Lee – it’s random up to a point. More like “planned randomness” LOL

How to sew rickrack to your quilt...