How to Use a Sewing Machine and its Features

Whew – we’ve had an amazing overview of the Husqvarna Viking Opal 690Q, it’s important to know how to use a sewing machine and its features. Who knew that one sewing machine was capable of so much. If you’re like me – you just want to sew all day.

I get asked many questions as I’m teaching and I thought I would share some of those questions with you today. I love to know the reasons WHY we are supposed to do things or why one thing works better than another. Here are a couple of topics that I hope you’ll enjoy and learn something at the same time.

The Husqvarna VIking Opal 690Q comes with a stylus. Now the big question is – Do you really need to use that stylus?

If you have never used one, I know you’re asking yourself that question and thinking it’s going to be way too fiddly to remember to use the stylus every time you want to change something on the screen.

Let’s refresh our memories of what the stylus looks like and where it’s stored. 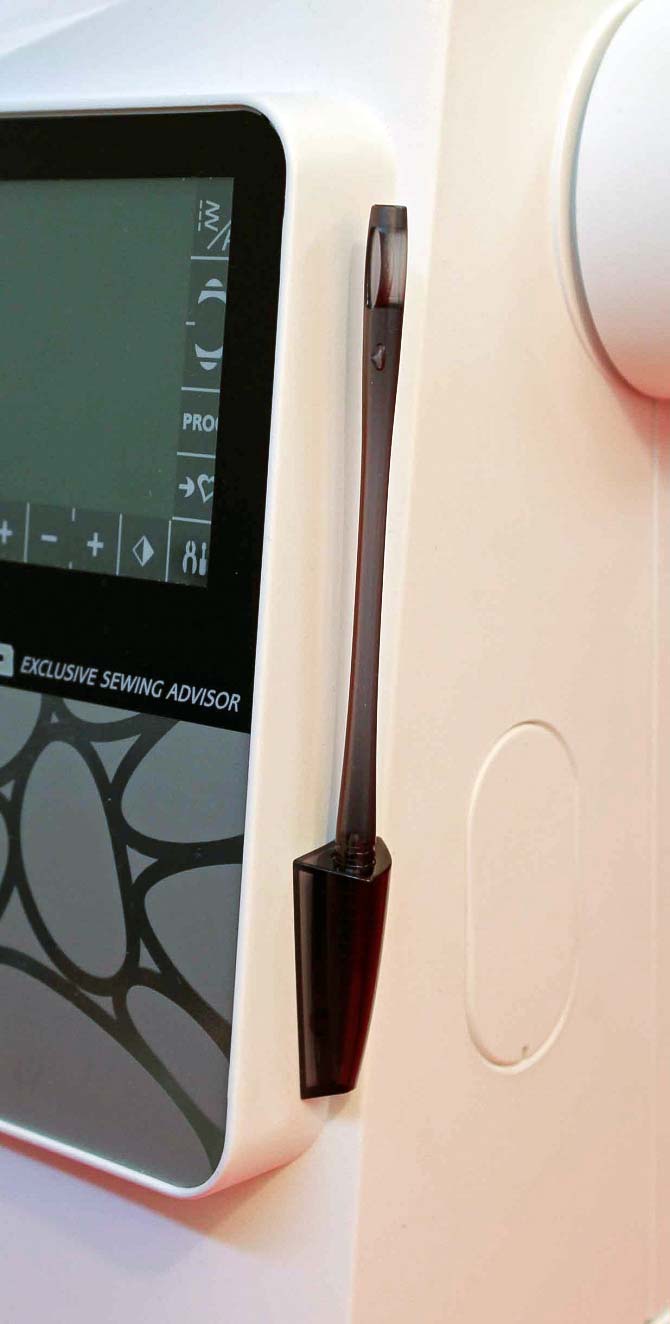 The stylus is mounted just to the right of the TouchScreen. A very handy location. As I went to make changes on the TouchScreen, I found my hand easily went to the stylus. I made the changes and then it was easy to put the stylus back in its holder. 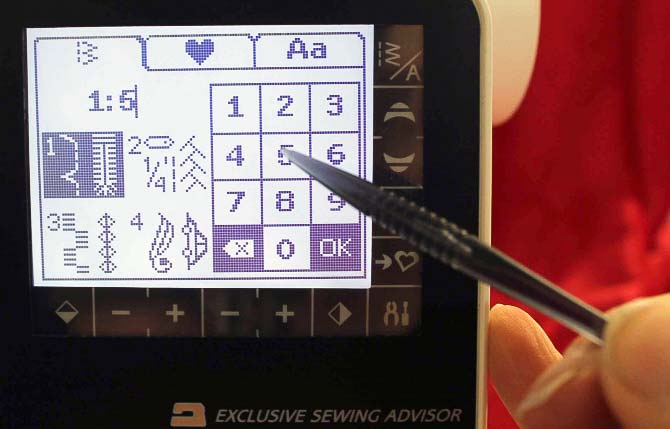 The stylus is easy to hold and the fine tip makes it easy to hit the correct spot on the screen. Let’s face it – our fingers get a little larger as we get older and without the stylus, it was difficult to get the accuracy I needed. Although there were times when I made changes on the TouchScreen using my finger. 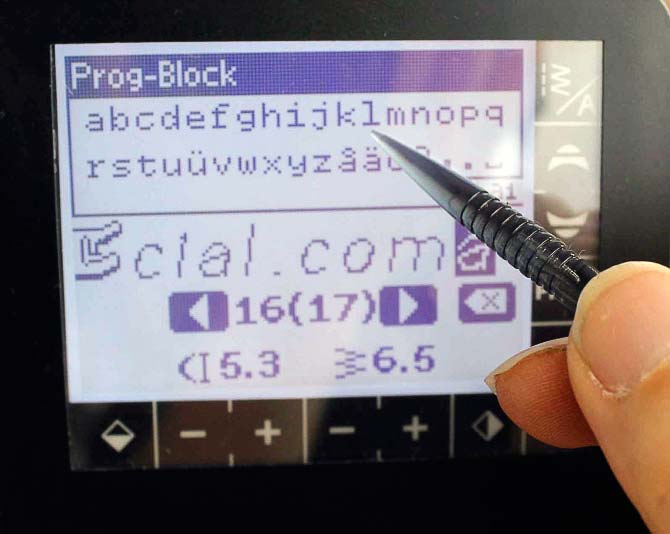 However when using the built-in fonts, you have no choice but to use the stylus. The letters are just too small to get the accuracy needed to spell out your lettering.

OK – so the stylus is good for accuracy, but do you NEED to use it? I asked that question to the experts at Husqvarna Viking.

Here’s the response I received: ‘In addition to accuracy, it appears that the less pressure on the screen the better.’

“The stylus is for accuracy in touching the screen. If you use the tip/pad of your finger you may not touch the right icon and it’s more about the pressure of the press on the screen than the oil from your hands. If you press too hard with the pad of your finger, besides not being accurate, the screen can start to “remember” how much pressure you’re putting on the screen and require it. When using the stylus you can be extremely accurate in selecting the icons and it’s a more delicate touch. If the machine isn’t responding directly to where you are pressing on an icon you may need to calibrate the touch screen through the Set Menu.”

Not just a pretty face! 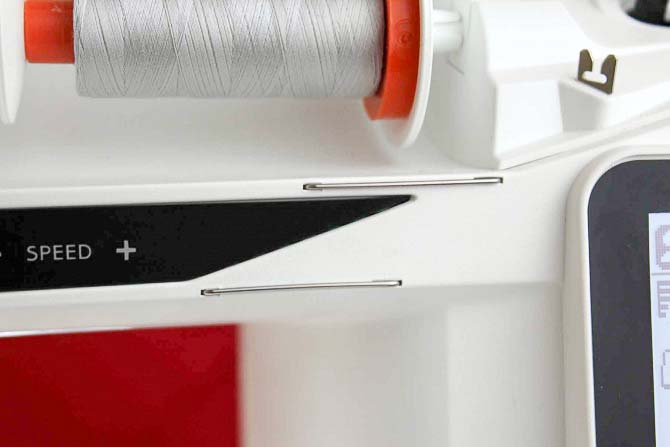 See these two little bars?… Any idea what they’re there for? Oh yes – they have a purpose. They are just not decorative. 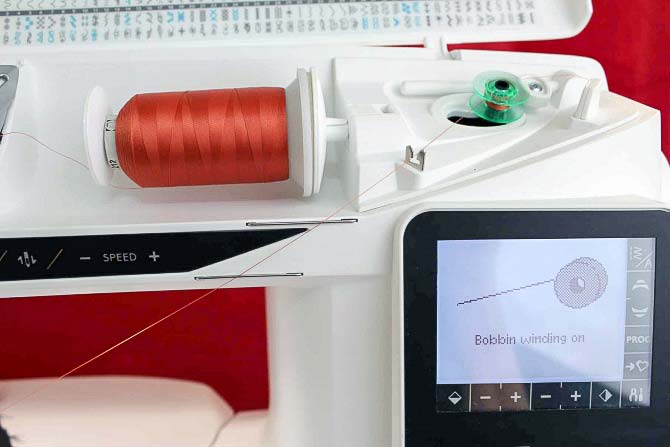 Spools caps – we know they are for holding the spools of thread – right? The Opal 690Q comes with three different sizes. I figured it was time to finally figure just where and how they were all to be used. 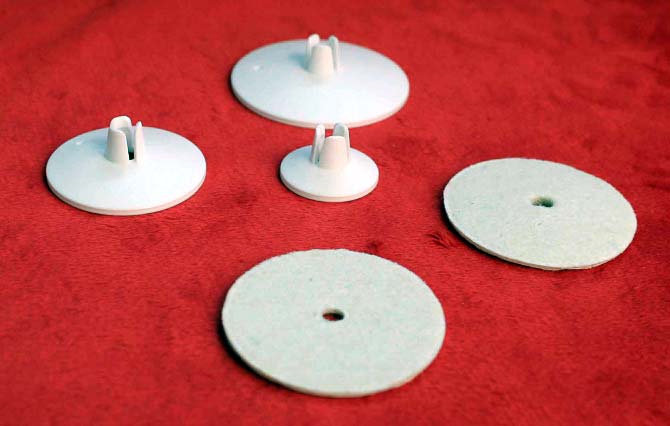 The Husqvarna Viking Opal 690Q comes with THREE different sized spool caps – a small, a medium and a large. It also comes with two large felt pads. So what am I supposed to do with them?

Let’s have a look again at the two spool pins that come on the Opal 690Q. 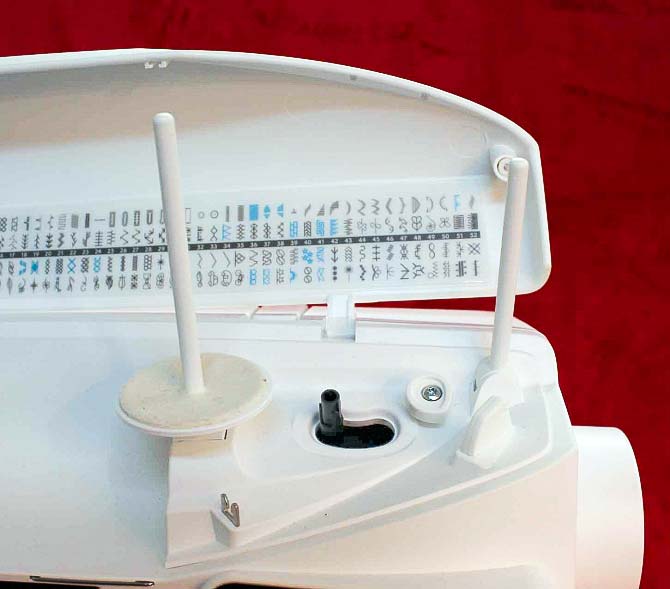 Do not use a spool cap on the top of the spool of thread when the spool pin is in the vertical position. 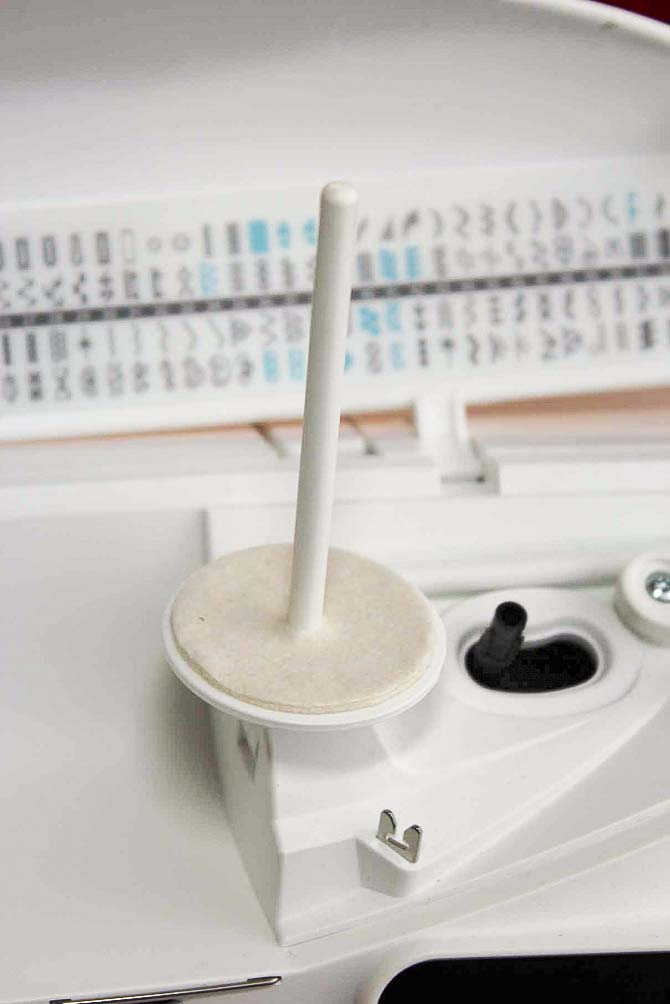 The main spool pin in the vertical position with a felt pad on the large spool cap. 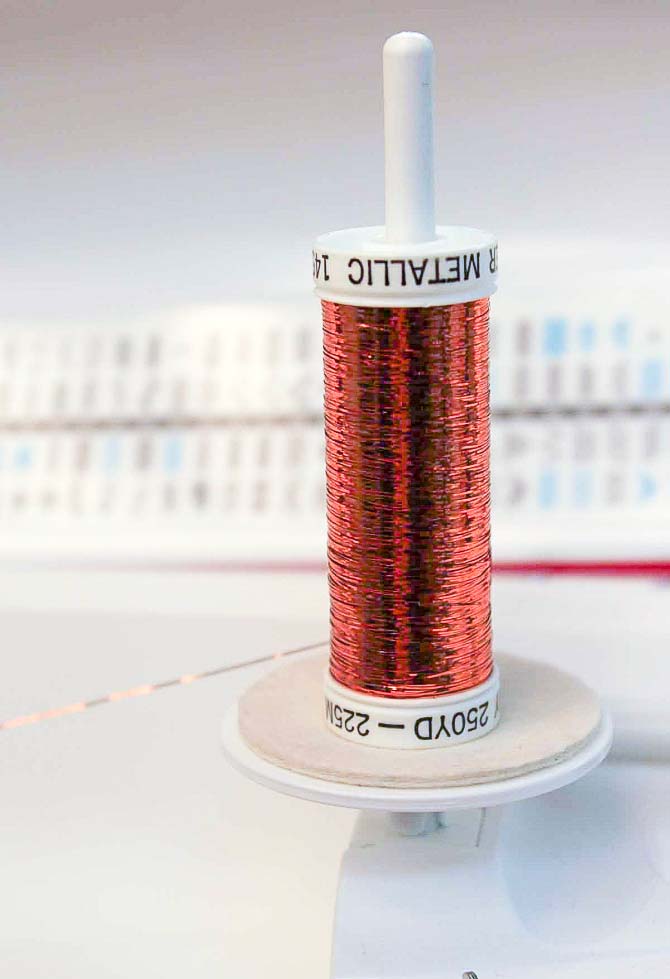 Here is a spool of metallic thread in the vertical position. Note the felt pad beneath the thread and NO spool cap on top.

If you’re using the main spool pin in the horizontal position you want to start by placing a large spool cap on the spool pin. There is no need to put a felt pad on the spool cap. 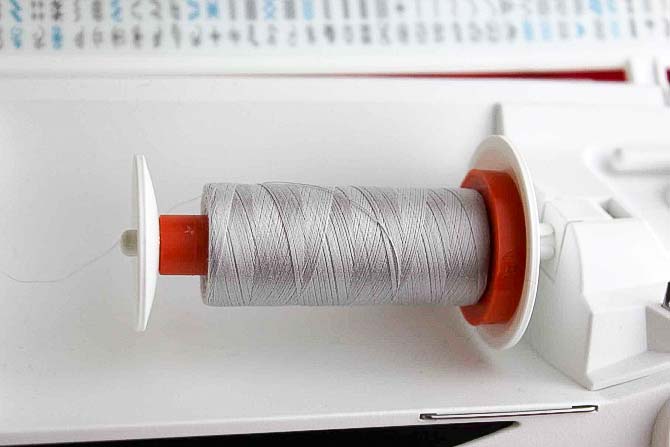 Once I lower the spool into the horizontal position and add a spool cap, the thread now flows free through the threading mechanism.

If the thread isn’t flowing freely, make sure you try both positions to get the best stitch possible. As an experiment – take several types of thread – load them into your machine in both positions. Do you see a difference?

As you work on any project, make sure you keep your options open. I often start with one idea and as I start my stitch outs or even work on the project, I get other ideas. Do not get stuck in the box. If you think your new idea is better – then try it!

This is what happened when I was stitching the little tags last time. 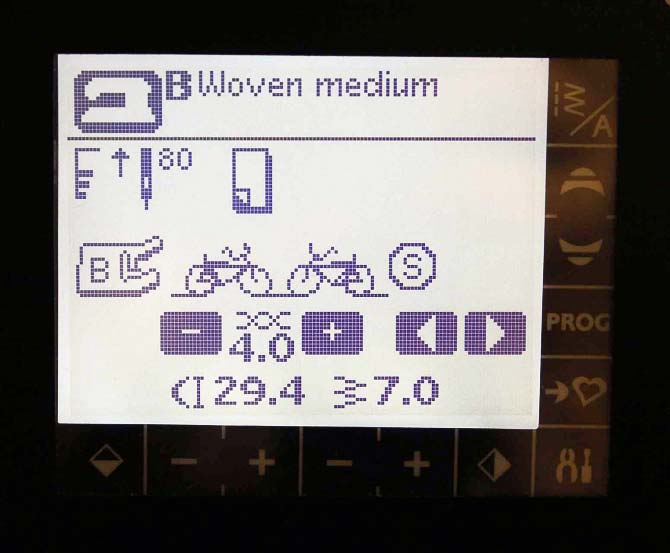 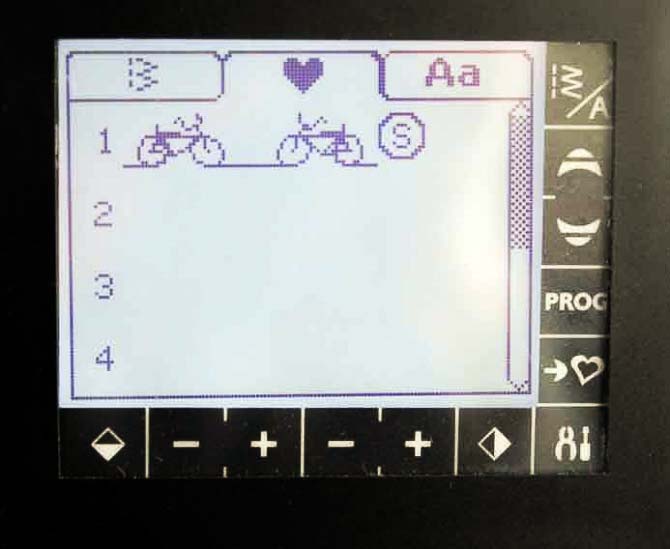 It was so easy to change the programmed stitches. The stitch sequence had been saved in one of the TWELVE slots for my stitches. I simply inserted TWO spaces between the bicycles so there was a bit more room between them. 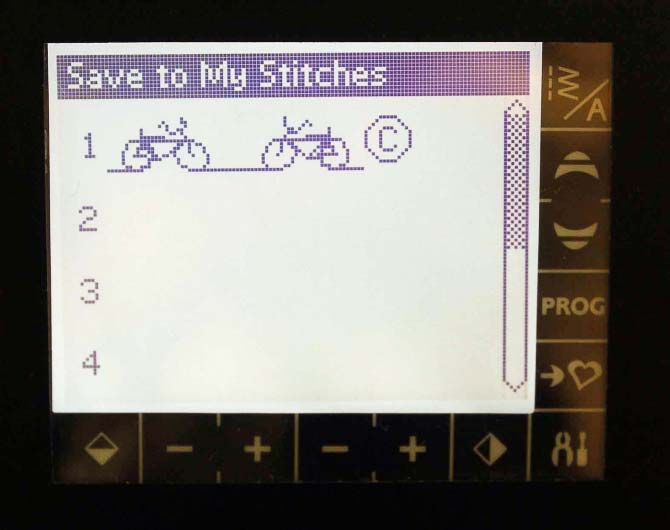 AHA – well if I can change that so easy, why not change the STOP function to a THREAD CUT function. Now when the two bicycles are stitched out, the Opal 690Q fixed the end of the threads and cut them. 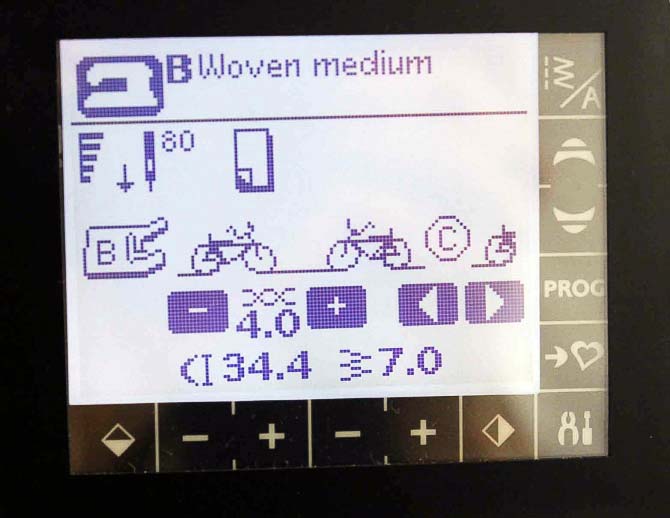 Once the changes were made, I simply selected this stitch from MY FAVORITES menu. I positioned my ribbon with the stabilizer underneath, hit the START function and all I had to do was hold the ribbon in place. The sewing machine cut the threads and I repositioned the ribbon and repeated the process until I had as many tags as I wanted.

There you have it – a few things that I thought I would share with you. Hopefully you found it as fascinating as I did. I know – I’m easily amused!

Whether you’re a quilter, a casual crafter, a home dec sewist or you make your own clothes – it’s important to know how to use your sewing machine and its features. You’ll find The Husqvarna Viking Opal 690Q, with its vast range of functions and extreme versatility will suit all your needs.

What a fascinating series of articles! We bought our machine in August 2014, so we missed this until now, when I was wondering about a walking foot for it. As you wrote, each time that I read the owner’s manual, I learn something new. Likewise, I learned about the 1/4″ stitch from you, and appreciate your examples that might persuade me to follow through on my plans to make a sampler of the stitches. I never thought I would want to use so many of them!

Grace – so glad you’re enjoying the articles and learning something from them! Good luck with your learning process and isn’t that manual an exciting read? thanks for following on QUILTSocial. elaine

A is for Applique

7 tips to speed up the quilting...