Today we are going to finish sewing the zipper on our cushion cover and then we’ll deal with those floppy corners!

To recap – my 12″ cushion form is densely filled with goose feathers and goose down, the cushion top measures 12 1/2″ UNFINISHED. The back of the cushion cover has been cut in half and the zipper is sewn on the BOTTOM half of the cushion back. 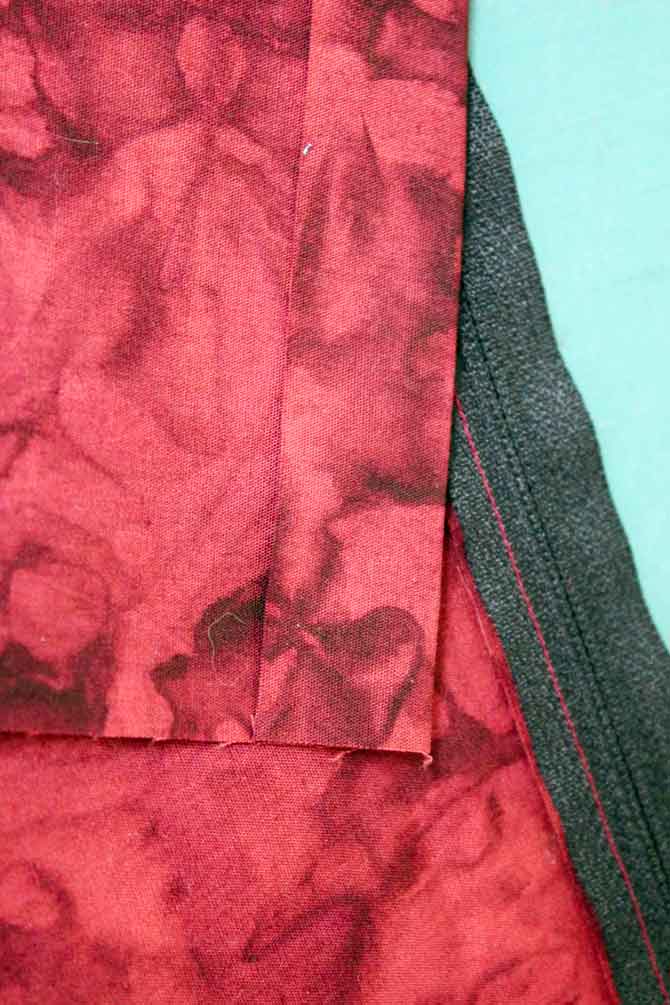 The ruler is there to make sure that when the two parts are sewn back together (with the zipper inserted between them) that the cushion back will be the size you need – in this case 12 1/2″.  If we have to trim – that is OK. Better to be bigger than too small. 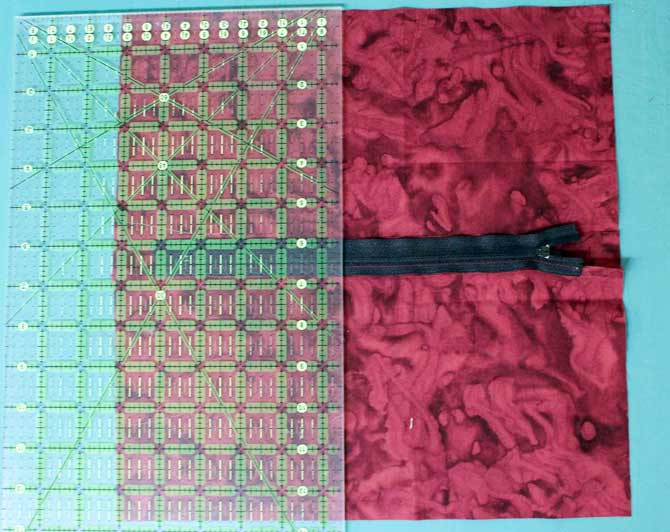 Line up the two parts of the cushion back

In this photo you can see a close up of what I described above. The long unsewn edge of the zipper is lined up with the raw edge of the folded under piece from the top part of the cushion back. Make sure the side edges are lined up as well. 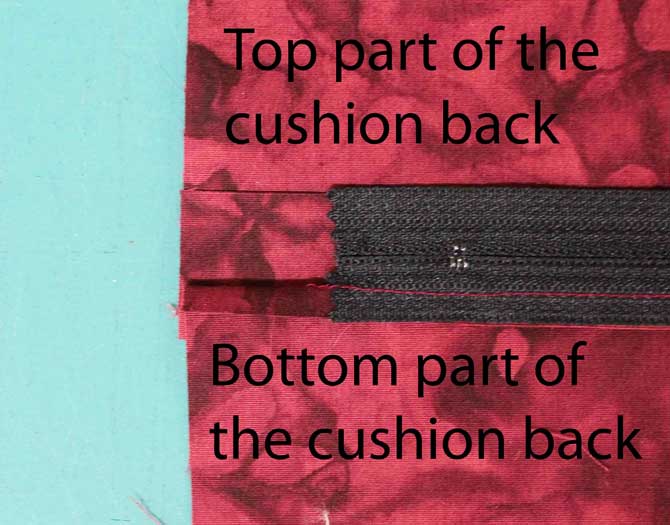 Line up the two parts of the cushion back 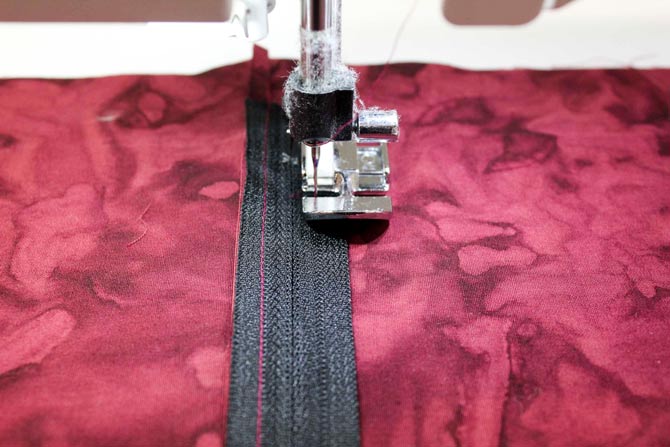 Using the zipper foot to insert a zipper

Pin well and using your zipper foot, stitch alongside the zipper. Even though the zipper does NOT go completely to each end of the cushion back – you NEED to stitch from raw edge to raw edge. 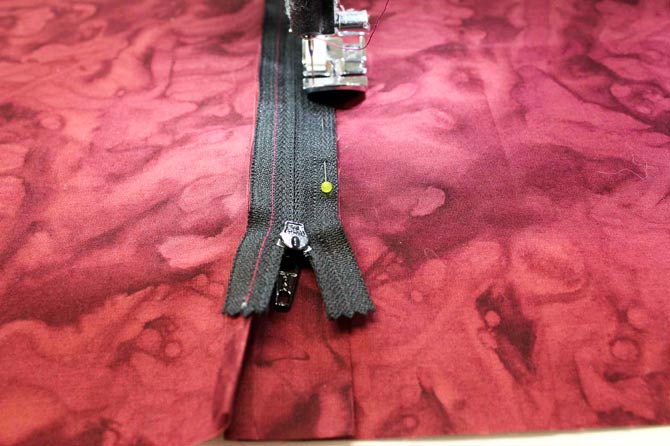 Move the zipper pull behind the presser foot and continue to sew the zipper all the way to the edge of the cushion back. 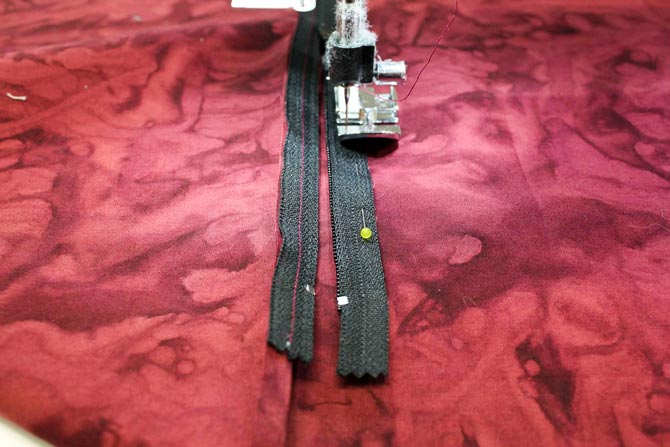 This is the almost finished cushion back. The arrow is pointing to a flap under which is the zipper. While we need the flap to be open where the zipper is – we need to close up the ends where there is no zipper.

The arrow is pointing to a flap under which is the zipper.

In this photo – you can see that flap a bit better. Stitch an L shaped seam that starts at the previous line of stitching and is just to the right of the zipper stop (inside the flap).

Once you reach the loose end – pivot and stitch to the end of the cushion back. 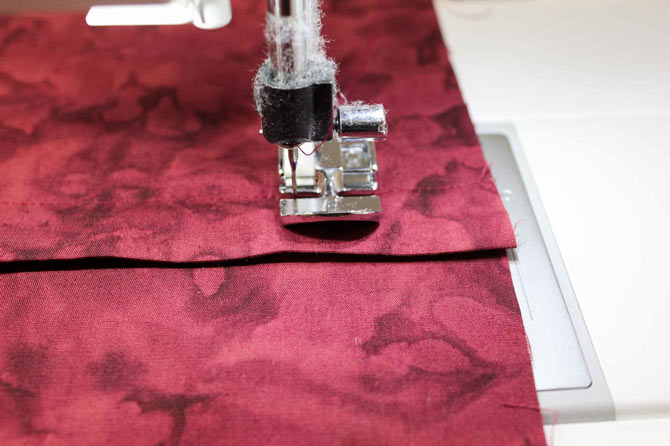 Stitching the end of the zipper flap closed 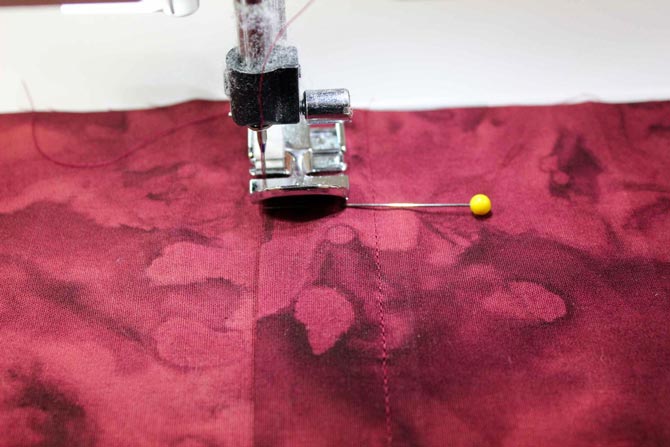 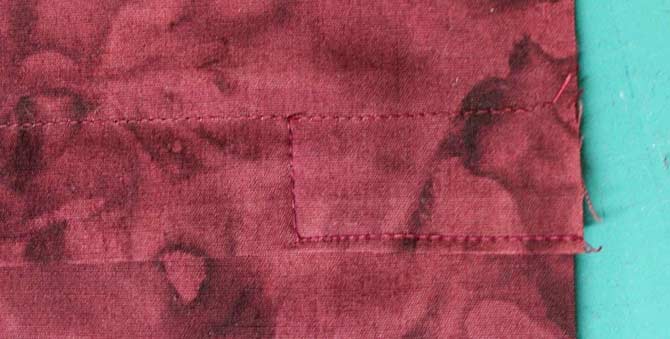 This is the final stitching that appears on either side of the zipper and keeps the zipper hidden within that flap. 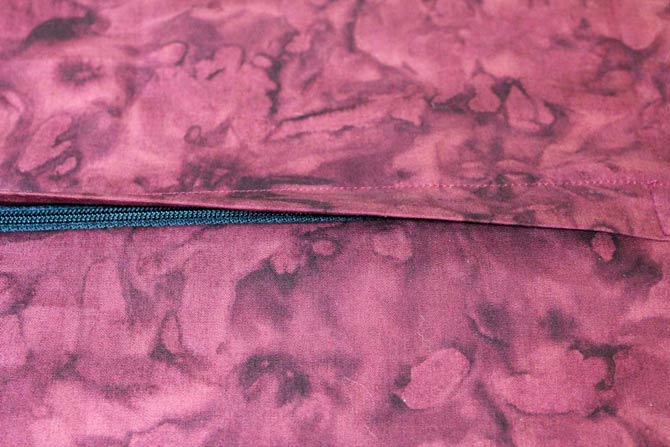 The zipper hiding underneath the flap.

The zipper insertion is complete. The zipper is hidden underneath the flap and there’s a seam at either end of the zipper to help hold the zipper in place and keep everything looking neat and tidy.

The zipper insertion is complete.

The last thing to do is trim that cushion back so it’s the same size as the cushion front. A bit of a challenge considering there’s now a zipper in the back. I tend to tip my ruler over the zipper and if the cushion back is slightly off size – it isn’t a big problem.

Literally that’s how we’re going to get rid of those floppy corners. Have a look to see how easy it is.

Using a marking pencil and a ruler, mark TWO wedge shapes on each corner. The wedge measures 1/2″ at the widest and is about 3″ long. If the cushion is larger, you may want to make your wedge slightly bigger, but don’t go too big. 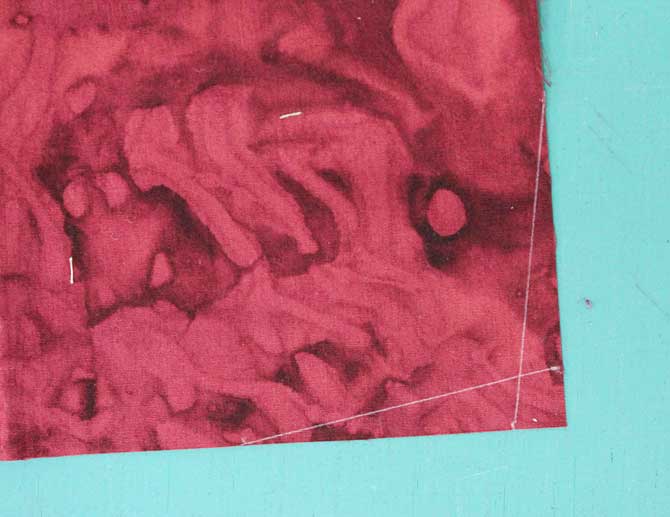 Wedge shaped marks on the corners of cushion back

Cut along the lines to cut away both wedges on all four corners. 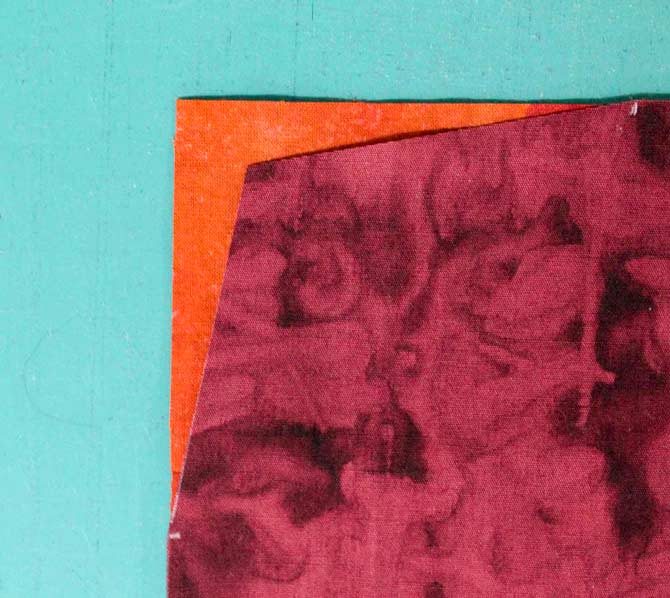 The cushion cover right sides together with the cushion back

Pin the cushion top to the cushion back. VERY IMPORTANT – OPEN the zipper at least half way and then stitch all around the edge using a 1/4″ seam. 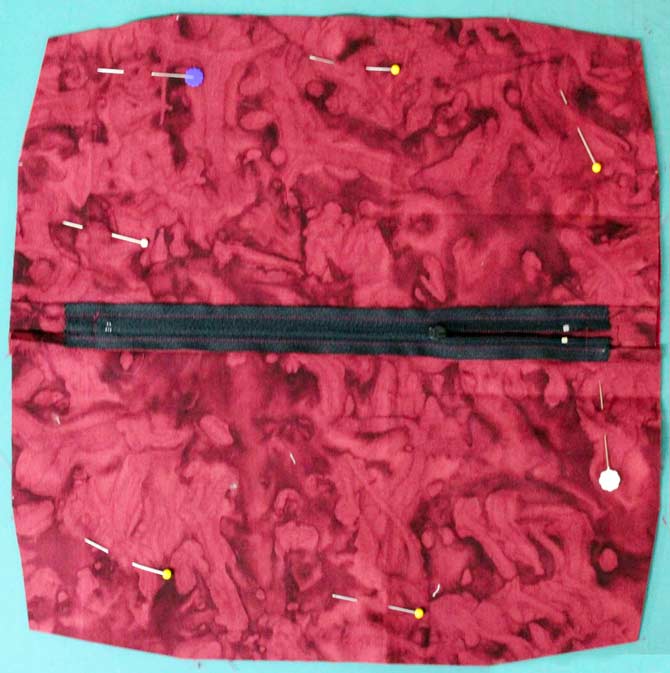 Notice that I pivoted in the corner, but did NOT pivot at the end of where the wedge was cut off. Just round that out – you do not want a noticeable change of angle at that point. 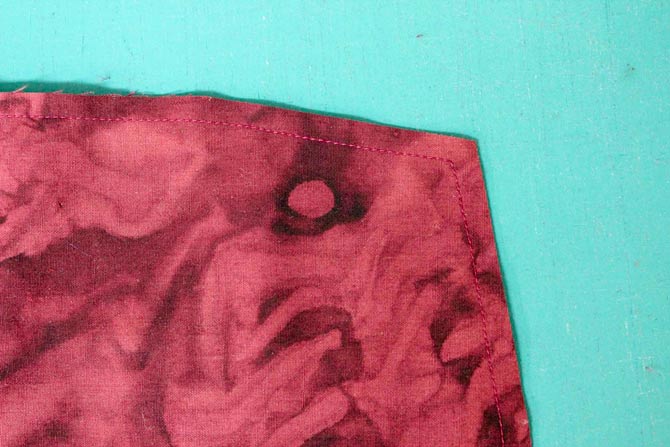 The corner of the cushion stitched 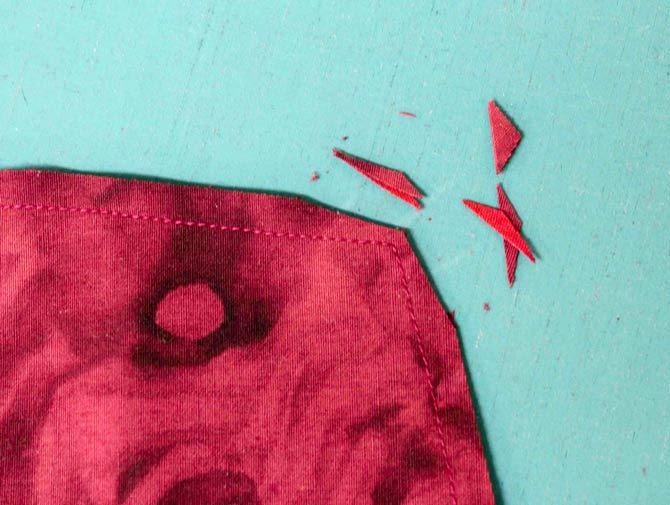 Turn the cushion cover right side out through the zipper opening. I hope you didn’t forget to leave that zipper partially open. Otherwise it’s time to rip!!! 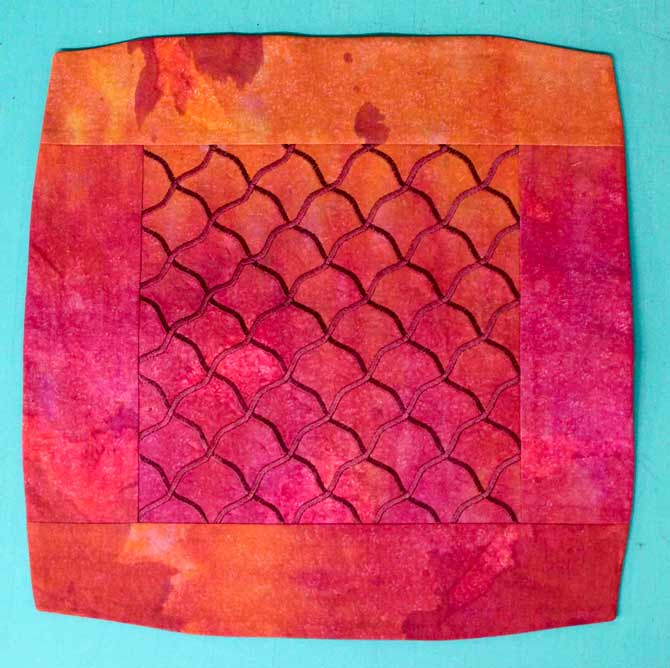 Oh shoot – the cushion cover is NOT complete without the personalized tag. For some reason I keep forgetting them. I didn’t make all colors of tags and black was the best color choice I had. 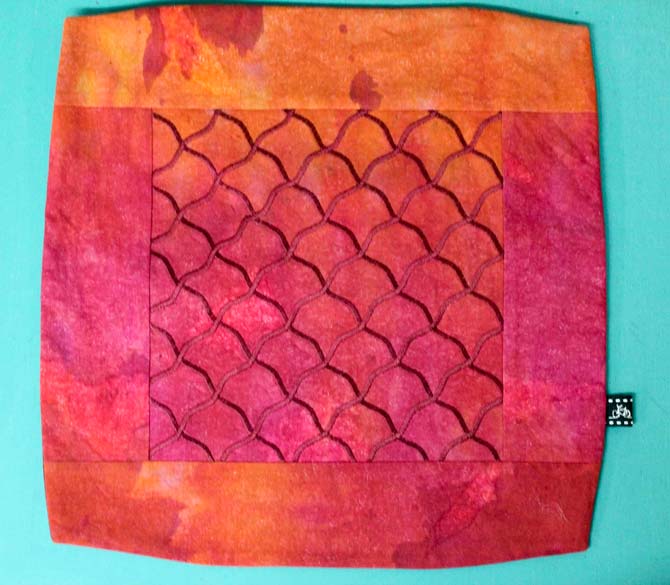 Check out this link if you want to learn how to make your own personalized tags.

Those tags on the cushion forms freak me out!

Under PENALTY of LAW – it sounds serious and for years I NEVER removed those tags even though I was the consumer!  I know – how silly of me!  I did remove these tags because this is going to be a tight fit and I don’t want those tags interfering with the appearance of my cushion. 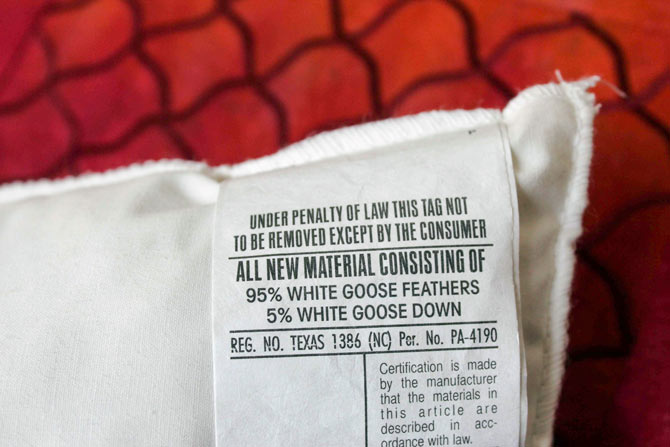 Next I insert the cushion form. This takes a bit of manipulation. My zipper is about 9″ long and my cushion form is 12″ so it means that I have to poke and prod, fold and squeeze, but I want a tight fit. 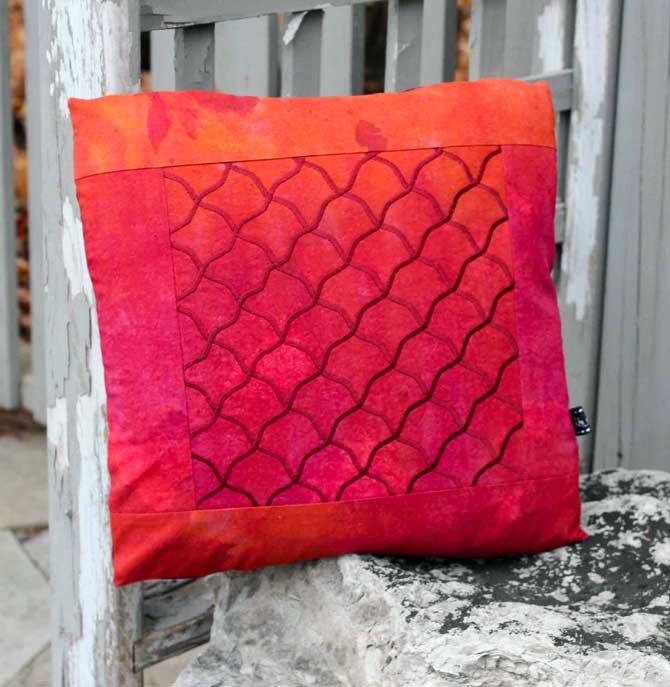 There you have it – a very simple way to insert the zipper so it’s easy to remove the cushion cover and yet looks professionally finished. And even better –  NO floppy corners.

Whether you use the Husqvarna Viking Sapphire 960Q or your own machine – there are many ways to make your own textured fabric. Try some stitch-outs. Make some cushion covers.

Don’t forget to send pictures of your completed cushion covers. I love to see how creative everyone can be.

Now that we’re done with sewing the cushion top, I’ll be back tomorrow to finish building my snowmen. Be sure to check out what I make with them.

Zip it up – Sewing a Cushion Top Part 1

2 ways to machine stitch a binding on...

2 reasons to use the Dual Feed Foot...

Top Ten Reasons why I love the Husqvarna...

Let’s do some Free-Motion Quilting

I am very into making cushions right now – and as usual I just plunged in and learned as I went along. Your zipper flap is great and I will use it on my future cushions. Thanks for the tute.
Pauline