I’m back for another exciting week with the Husqvarna Viking Saphhire 960Q sewing machine. If you want to check out my previous posts on what this sewing machine can do – follow this link and it will take you to the start of the week of my reviews.

If you had the choice between sewing and cleaning your house, which would you choose? The choice is pretty clear at my house! However, did you know that to prolong the life of your sewing machine and to prevent a myriad of problems, you do need to do some housekeeping for your sewing machine? I know – you just can’t escape those duties!

However, the great thing about the Sapphire 960Q – the housekeeping is minimal and takes very little time. Whew! I was worried! 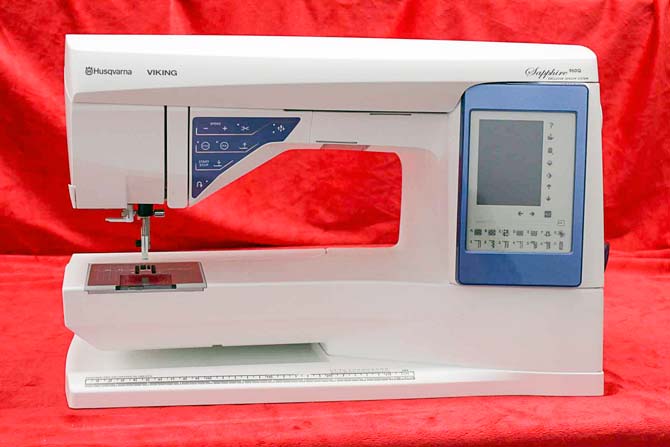 While maintenance for most modern sewing machines would follow the following guidelines – you must check your manual to see what the process is recommended for your specific sewing machine.

You should clean your sewing machine on a regular basis.

I use the same bobbin thread for 99 percent of my projects. So after I clean my sewing machine, I wind FOUR bobbins. When those bobbins are used up, it’s time to clean the machine. 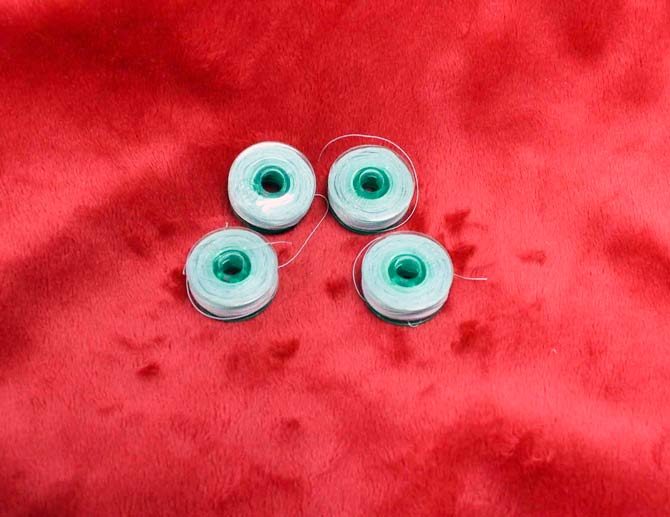 After I clean my sewing machine, I wind FOUR bobbins. When those bobbins are used up, it’s time to clean the machine again.

Keep the old/broken/bent needles in a small container such as a pill box. When that container is full – tape it shut and get rid of it. No danger of someone getting stabbed by a used sewing machine needle. This container can also be stored in the box where you store your extra needles so everything “sewing machine needle” related is together. 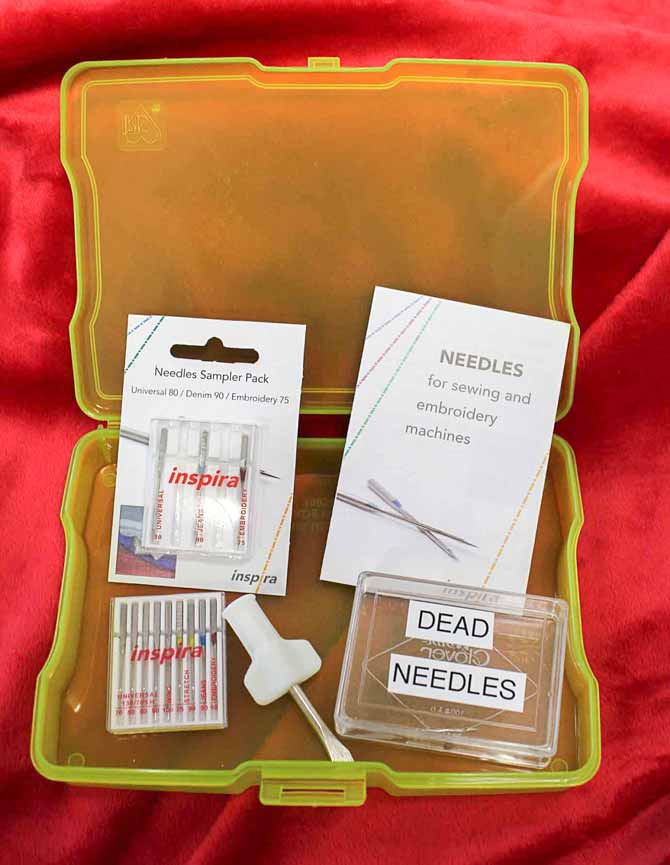 How do you clean the bobbin area?

It’s amazing how much lint can collect from sewing. Some threads are lintier than others, but whatever thread you use – you’re going to get lint!  It’s important to keep the bobbin case and the area underneath the bobbin case clear of this lint as the lint can do things to the sewing machine that you don’t want. Like throwing off the bobbin tension, causing the bobbin sensor to malfunction and other unwanted issues. 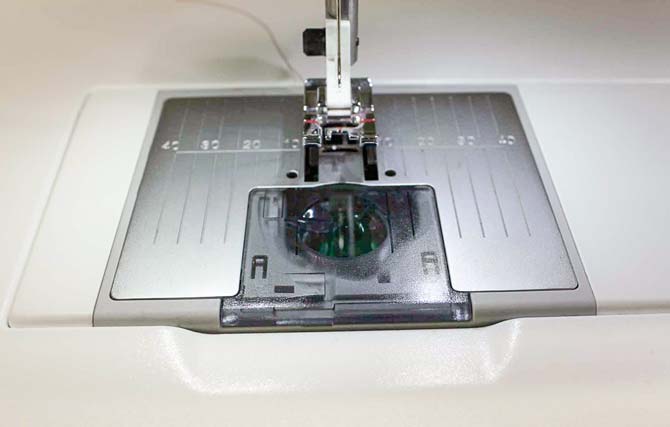 Start by removing the bobbin cover. Note that I have the extension table on the machine. 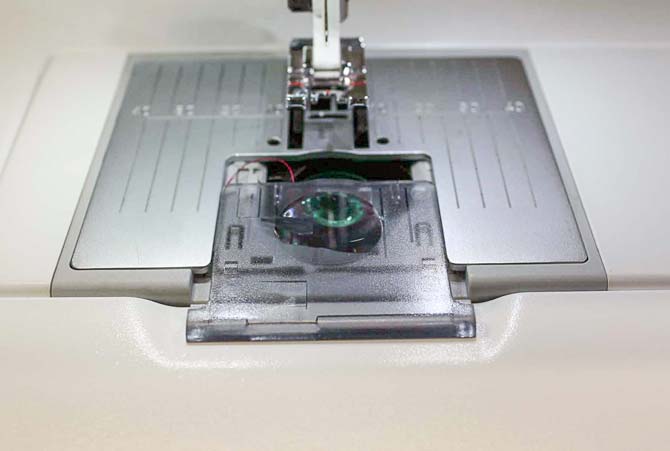 I am so impressed with this extension table. The designers thought about putting that little depression there to prevent the bobbin cover from hitting and scratching the edge of the extension table. 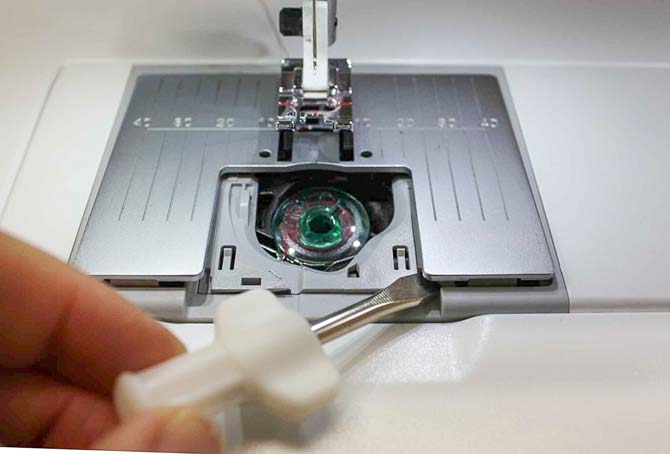 Use the screwdriver to remove the needle plate. 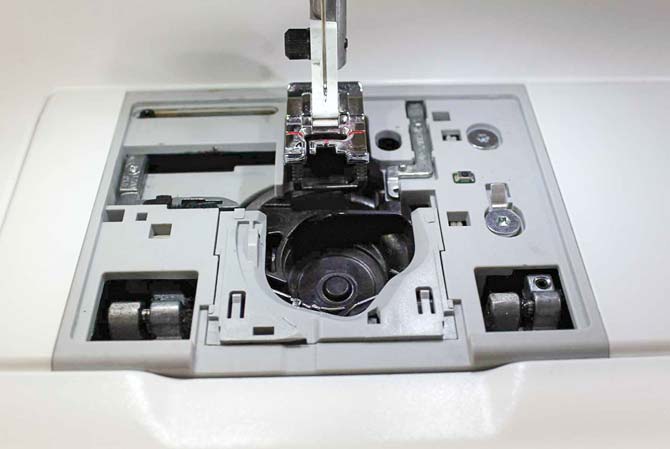 Ah – so that is what it looks like under that needle plate!

Next remove the bobbin case holder. You can see that the small grey piece at the front of the exposed area has been removed.

One of the nice features of the Sapphire 960Q is that no screws need to be removed for this maintenance process.

That means… it’s quick and easy to remove these parts in the bobbin case area and the quicker and easier the process is, the more likely that you’ll actually clean the machine on a regular basis! 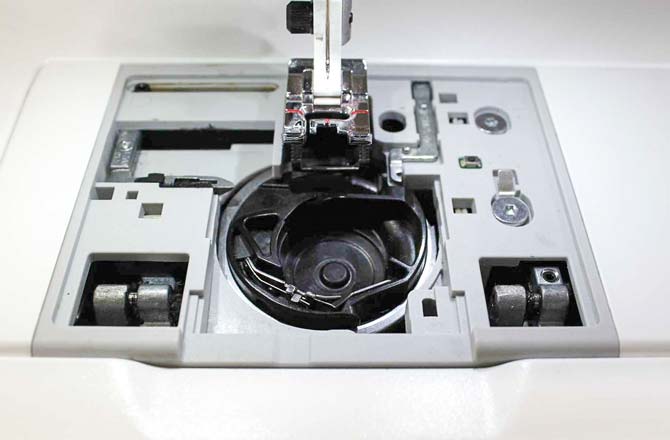 Next remove the bobbin case holder. You can see that the small grey piece at the front of the exposed area has been removed.

The bobbin case has been removed. Again no tools are required for this process, making it quick and easy to clean in this area.

Notice I have taken the presser foot off of the sewing machine as well. This gives me more space to work. Again – a simple tug and that presser foot comes off very easily. I could take the entire presser foot ankle off for even more room, but then I have to use the screwdriver to remove the screw and that’s too much work and I don’t gain anything by doing that.

Remember our goal is to spend the least amount of time on a necessary task so we can get back to sewing as quickly as possible. 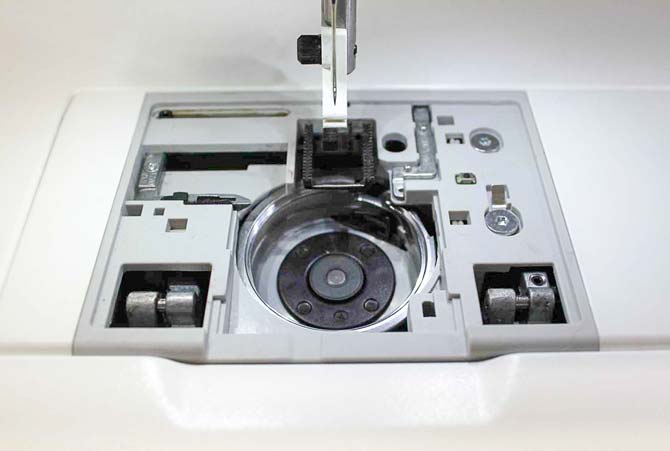 The bobbin case has been removed.

This is where the thread lint will collect – underneath the bobbin case. Once that bobbin case is removed, it’s a simple process of using the supplied brush and cleaning out any lint.

Many people do not realize that they need to do this on a regular basis and it causes much panic in my classes when I share that with the participants!

I even heard stories of customers asking their dealer if they could get a NEW felt pad for the bobbin case – the felt pad is the LINT!

I also give the feed teeth a brush as lint tends to collect there as well and that can inhibit how smoothly the fabric is fed through the sewing machine.

Here’s the brush with a SMALL amount of lint. This Sapphire 960Q has not been used much since the bobbin case area was last cleaned but trust me – there will be a LOT of lint after four bobbins.

I shall see if I can accommodate four bobbins over the next week so you can see how much lint accumulates. 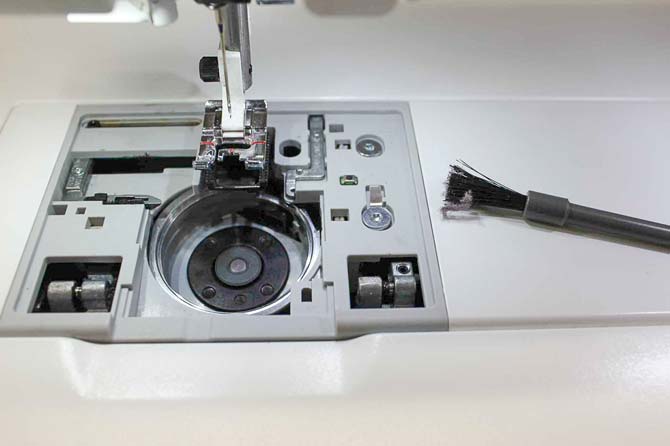 Here is the brush with a SMALL amount of lint.

A couple of other housekeeping notes:

Wipe the touch screen with the microfiber cloth that is included with the sewing machine. Best to do this when the machine is OFF as you will tend to change the settings when you wipe the screen. 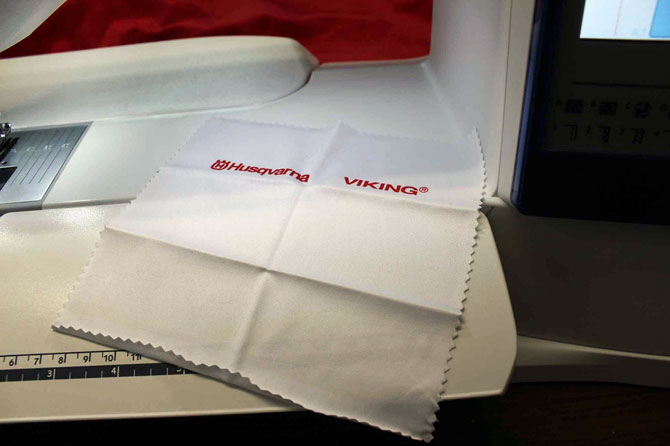 The microfiber cloth for cleaning the touch screen

There’s an excellent section (short and to the point) on troubleshooting in the User’s Guide.

It’s late at night, you have a nine a.m. deadline and your thread is breaking. You’re frustrated – you’re cursing your machine and the dealer and the customer and anyone or anything else that pops into your head. You should stop – take three big breaths and then get out the trouble shooting section in the User’s Guide.

Over the years I have learned (by reading and experience) that this trouble shooting guide pretty much sums up on 2 pages a lot of information to help you with thread breaking issues, skipping stitches, uneven stitches and some general areas of concern.

An extremely valuable resource and not a bad idea to read it and memorize it!!! I can hear you moaning now! Seriously – it is very useful information and since I nor your dealer won’t always be with you – that troubleshooting guide is awesome! 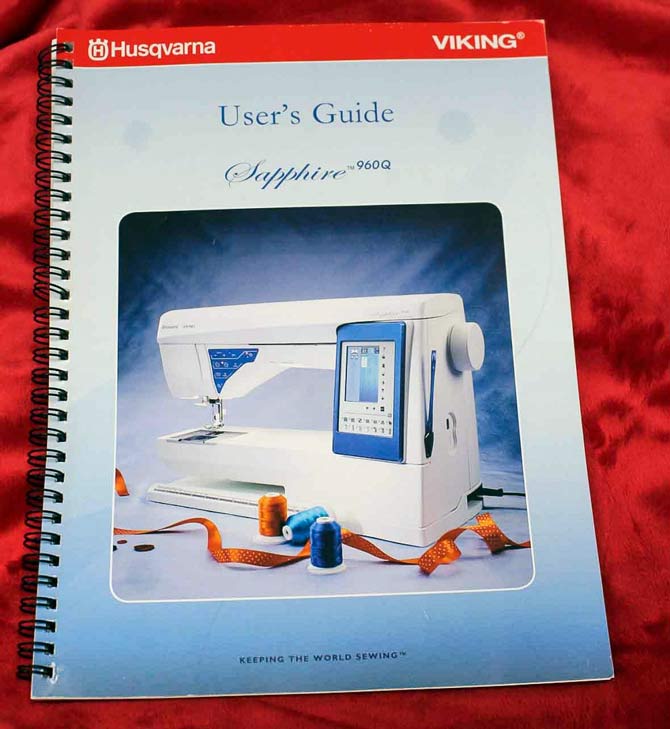 When in doubt – read the manual!

Sewing machines have come a long way and the Husqvarna Viking Sapphire 960Q really has some amazing features. By playing with the machine (something we don’t normally take time to do) and sharing it with you – you’ll get a better appreciation of what we can do with these fabulous sewing machines.

As much attention to detail that has gone into the sewing machine, the designers don’t necessarily sew like I do. BUT the designers have made provisions for that.

The Sapphire 960Q allows you to program your own stitches. You can combine stitches, letters/numbers and functions together to get your own personalized stitches. This is a fabulous feature and can save so much time and frustration. No more writing the stitch setting information down on the project sheet, no more losing the information or simply forgetting what the settings were.

You can program the stitch combinations into the sewing machine. I’ll be touching more on that another day. Today I’m talking about how to organize and maintain the program files that you create.

The Sapphire 960Q has a built-in USB port.

The port can be used should you need to upgrade the software version on the sewing machine. More importantly, it can be used to expand the amount of memory needed to store your programmed stitches. 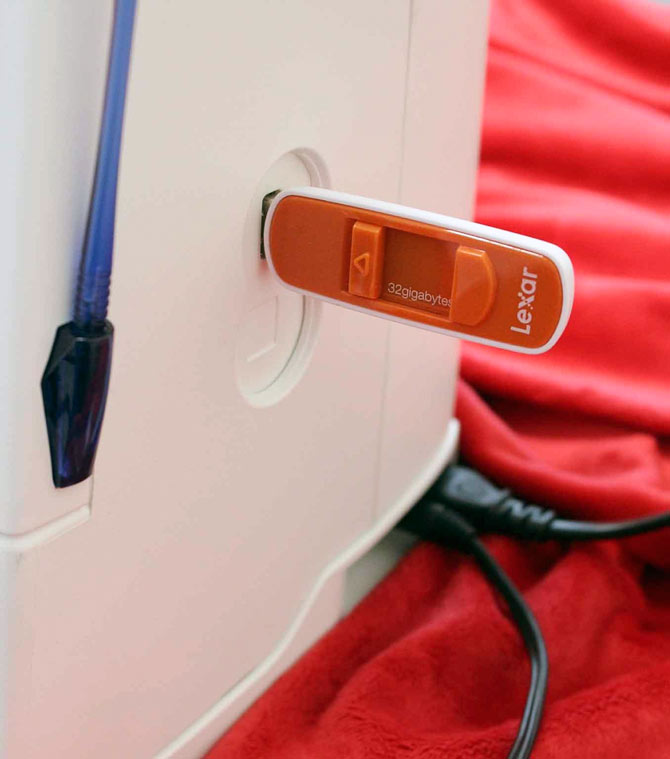 The Sapphire 960Q has a built-in USB port. 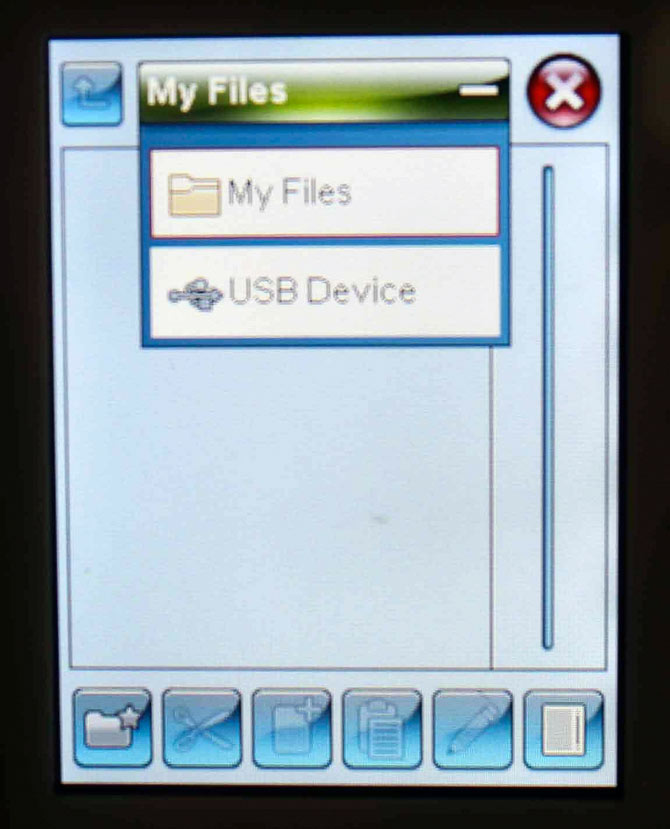 When I go into the File Menu, I can choose to save my programmed stitches on the sewing machine under My Files or on the USB stick.

Now those housekeeping tasks weren’t as bad as you thought they were going to be!  A few minutes of maintenance every so often (OK – every four bobbins) will save you a lot of angst and no one wants their sewing machine to go in for expensive repairs that could have been avoided by regular maintenance.

One last very important thing to remember – do NOT blow air (compressed air) into your sewing machine. Instead of getting rid of the lint – you are simply pushing it deeper into the mechanics of the sewing machine. If something is stuck in there – perhaps a quick trip to the dealer will help you get it out.

So sewing or housekeeping?…Hmmm, well housekeeping is definitely important, as for sewing, starting tomorrow I have a great project for us to work on this week.

Stay tuned and hey – why not get those four bobbins fired up, clean out the are beneath the bobbin case and change the needle!

Do You Know How to Bind a Quilt?

2 ways to machine stitch a binding on...

2 reasons to use the Dual Feed Foot...

Top Ten Reasons why I love the Husqvarna...

Let’s do some Free-Motion Quilting

Excellent info here, I am currently doing some research and found exactly what I was looking for.

So happy you found what you were looking for! Thanks for sharing.