Yesterday on QUILTsocial I shared 5 tips for making fusible bias tape with tools from Heirloom and HeatnBond. We used our black fabric to make our own bias tape strips with the help of HEIRLOOM Bias Tape Maker – 6mm (¼”). 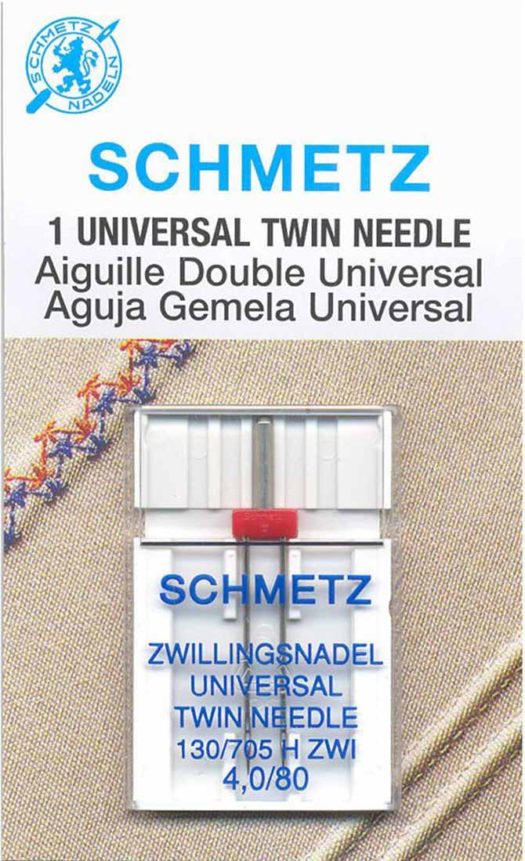 The last thing we did yesterday was to fuse the sticky side of the iron-on adhesive tape to the fabric bias tape. Today we’ll fuse the bias tape to the quilt top, and then we’ll use the twin needle to secure them to the wallhanging.

Before you start, take the long bias strip that was cut on a 45° angle and set it aside for later.

The first pieces of bias tape that we’ll place on the quilt top are the shortest pieces. Using the following picture as a reference, measure and cut the small pieces needed from two of the bias tape strips that were cut on the straight grain of fabric.

Once you have 15 short pieces placed on the quilt top as in the photo below, place the hot iron directly on top of each piece, leaving the iron in place for 3 to 4 seconds. This will be just long enough for the adhesive tape to fuse to the quilt top. 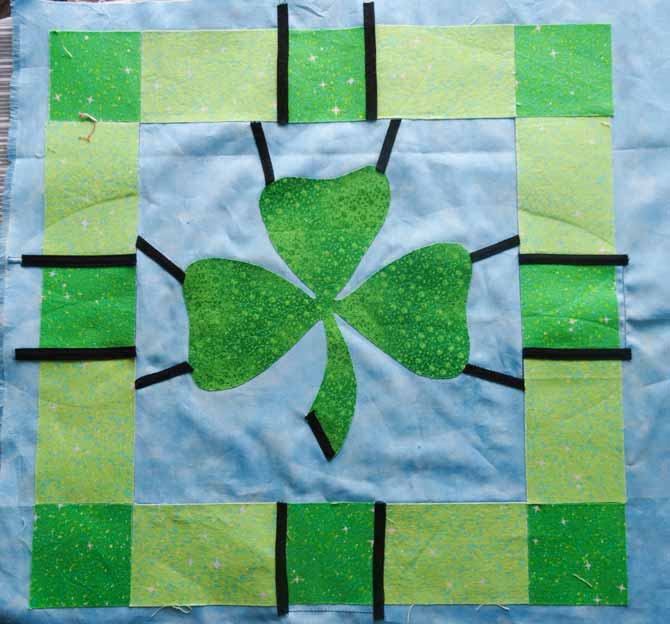 Placement of the small pieces of bias tape

Switch to the SCHMETZ twin needle on your sewing machine along with an appropriately sized presser foot for a twin needle as per your machine’s instructions.

You’ll need two spools of black thread. When threading your machine, thread one spool at a time making sure one thread is on one side of the tension disk and that the other thread is on the other side. Consult your sewing machine’s manual to see the best way to do this with your machine.

When you’re set-up, center the presser foot directly over the first bias strip section you wish to secure. 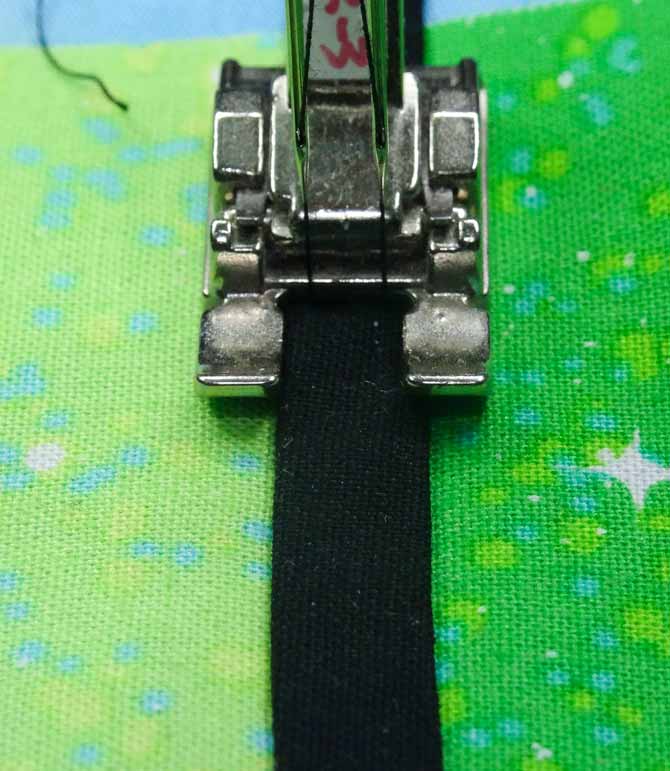 You may want to do a couple of back stitches at the beginning and end of each bias tape piece.

Once you’ve finished stitching down the smaller bias tape pieces you can move on to the shamrock centerpiece.

For this step, you’ll need that long piece of bias tape that you put aside earlier. Because this fabric was cut on the bias it will be easier to bend around the curves of the shamrock.

Start by placing the end of the long strip of bias tape on the center of the shamrock as shown in the photo below. Press that end in place with the hot iron.

As you continue to place the bias tape following the curves of the shape, press down with your iron every inch or so, more often when you are going around a curve. 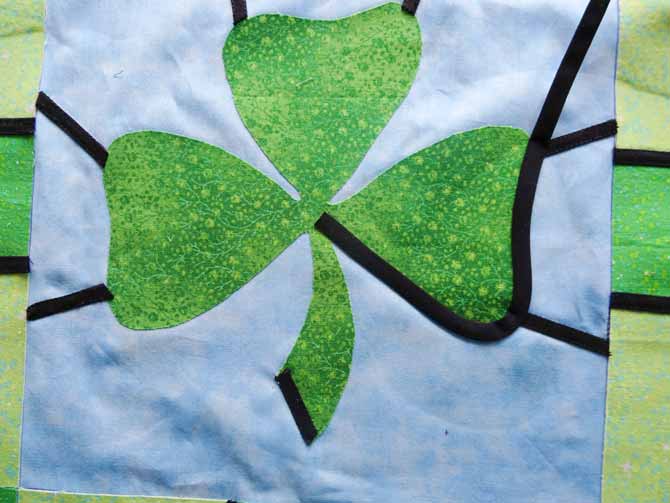 Place the long bias tape strip along the edge of the shamrock, starting in the center. 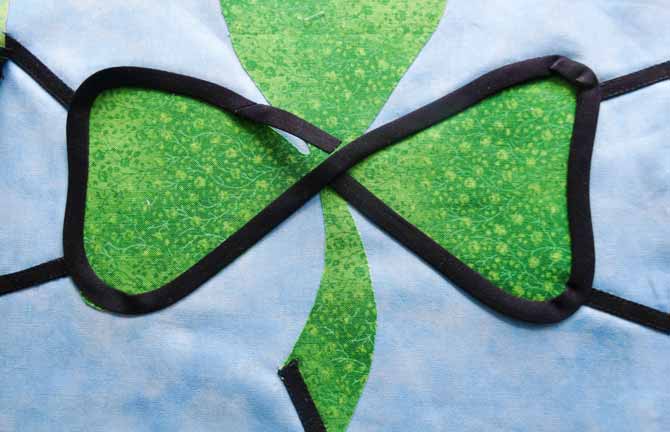 Hiding the end of the bias tape strip underneath the bias strip.

Now we head back to the sewing machine to secure this bias tape strip to the quilt top as you did earlier with the smaller pieces.

Once this step is completed, the next step is to use the rest of that long piece of bias tape to go around the sides of the stem and the third clover leaf.

As you’ll see in the next picture, I started at the bottom of the shamrock’s tail going up and around the top of the shamrock then down again. Fuse it all into place as before then sew to secure. 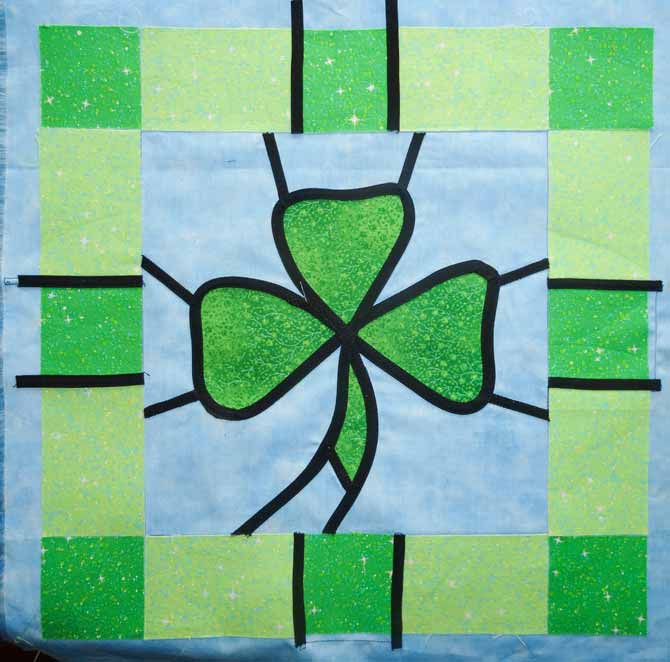 Placing of the bias tape around the rest of the shamrock.

You should now have four more grain wise strips of bias tape leftover. Place and fuse these strips onto your quilt top as shown in the next photo then sew them into place. 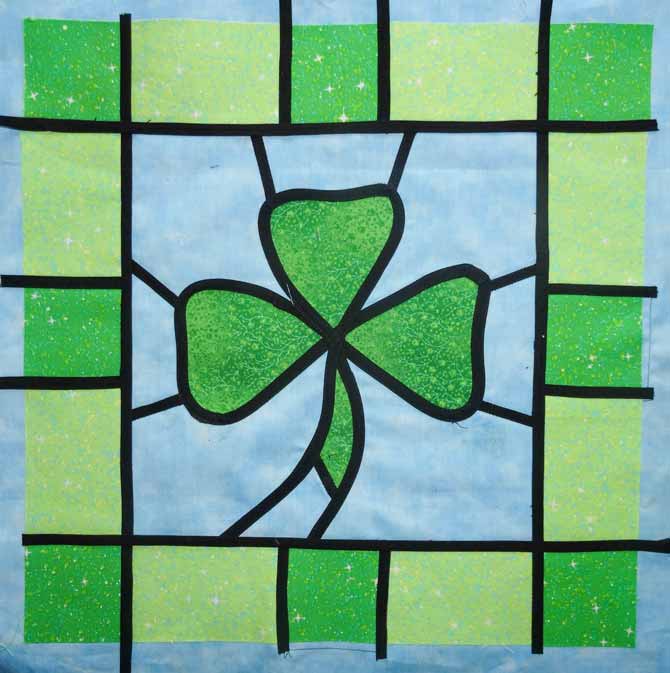 You’ve now finished the shamrock stained glass quilt top!  The only thing left to do is to baste, quilt and bind! St. Patrick’s Day is still a few days away but you still have time to finish it.

In 2012 I completed a Crossword puzzle quilt that has more bias tape sewn onto it than I care to remember. To complete the quilt I used SCHMETZ Twin Needle 80/12 and I’m glad I did since it made the project so much easier and quicker to complete. I would do it all over again; as long as I had my twin needles. 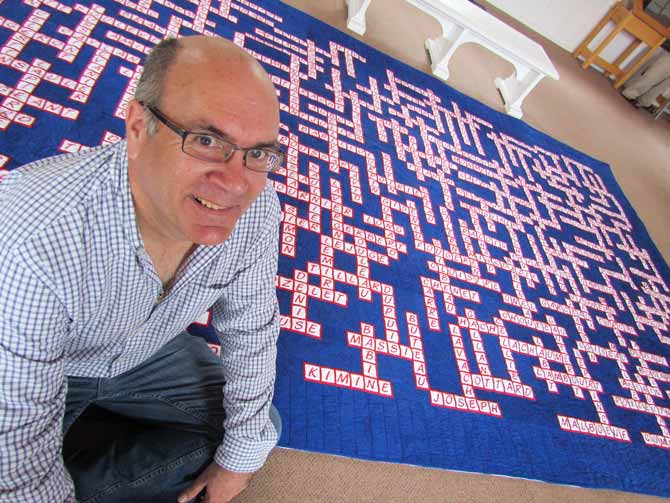 Tomorrow I’ll do another easy quilt project using another HEATNBOND® product which will help you to make multiple applique pieces at once.

This is part 3 of 5 in this series.
Go back to part 2: 5 tips for making fusible bias tape with tools from Heirloom and HeatnBond

this is a great tutorial. thanks for sharing

Sewing bias tape with a double needle is such a great idea!

I am anxious to try the shamrock now with the bias tape. I can hardly wait to use the twin needle too.

I’ve been thinking of doing this, this project is so pretty.

Such complex work. That’s a lot of time and effort you put in to make that huge crossword 😛

Thanks for sharing this wonderful knowledge.

I love this idea of using a double needle. What a time saver! Thanks!

Nice tutorial, I am going to have to try this for myself.

I bought a “UFO” project that is a stained glass quilt. Now I know how to finish it up!

Thanks for the great tutorials!

A great series of tutorials, I’ve never done this and wouldn’t attempt it without a tutorial like this. Thank you so much.

Thanks for the great tutorial!

5 easy steps to finish your bowl...

5 easy steps to making a quilted...

HeatnBond is one very happy family of...