Home » HA Kidd » H.A. Kidd sewing notions » The sewing and design table is greater than the sum of its parts 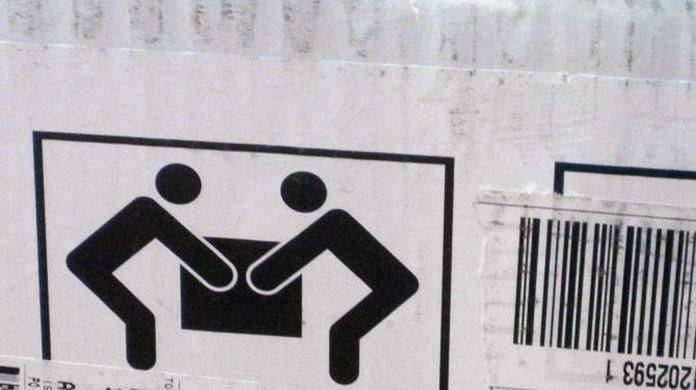 Get some help in unpacking the Studio Collection Sewing and Design Table. 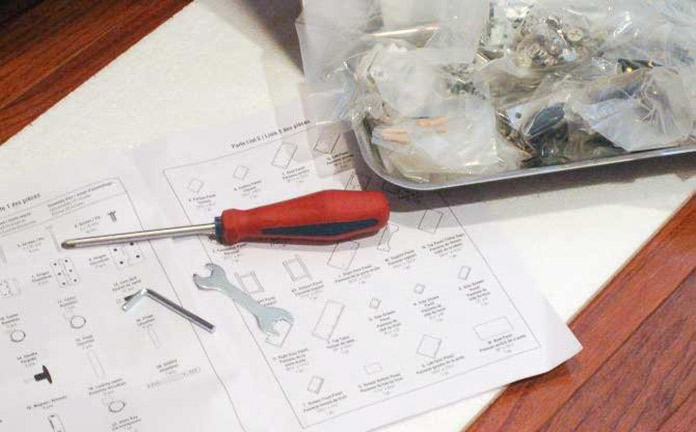 Organize the hardware and the instructions. A magnetized tray helps keep all the metal parts together.

Unboxing the flat packed Studio Collection Design and Sewing Table from HA Kidd  is a two-person job at the outset. The shipping weight is 85 pounds, and there are bits that are very heavy. But let’s see how the sewing and design table is greater than the sum of its parts…

After your helpers have moved the box around, send them away. You’ll now need your wits about you.

You’ll find a handy large sheet of high density foam in the packing materials. Use it to cover the floor and to place the many parts of the table. You’ll notice that each part has a sticker letter. These are very important, set them aside with the letter showing. The giant bag of hardware is tucked in with the instructions.

Years ago, a dear friend of mine gave me a magnetized tool tray — the kind they use in auto shops to hold nuts and bolts. It has come in handy for various sewing tools projects, and now for the first time, furniture assembly.

I put the large bag of hardware in the tray, and carefully opened it to discover several smaller bags. Each of these bags has a number sticker. The numbers correspond to the part named in the instructions. The bad news is the stickers fall off easily. I took a minute or two to place a piece of tape over each sticker to make sure they stayed stuck to the bags. It made life easier as the assembly process went on.

As with any project, making a quilt, setting up a new sewing machine, or building a sewing table, take some time to go over the instructions. Unlike its counterpart in the Studio Collection —
the Home Hobby and Design Table — the instructions lack a number of clear photos or illustrations.

But, fear not, we can do this! We can coax an entire quilt out of five fat quarters and a bit of batting — this is a piece of cake.

I took my hubris to the garage and test drove a number of screw drivers. I finally found a Phillips head screwdriver bit that didn’t quite fit my dollar store, but very cool, mini ratchet screwdriver.
No problem. I just attached the bit more securely into the ratchet chuck with a piece of packing tape. See, quilters are resourceful at all times. 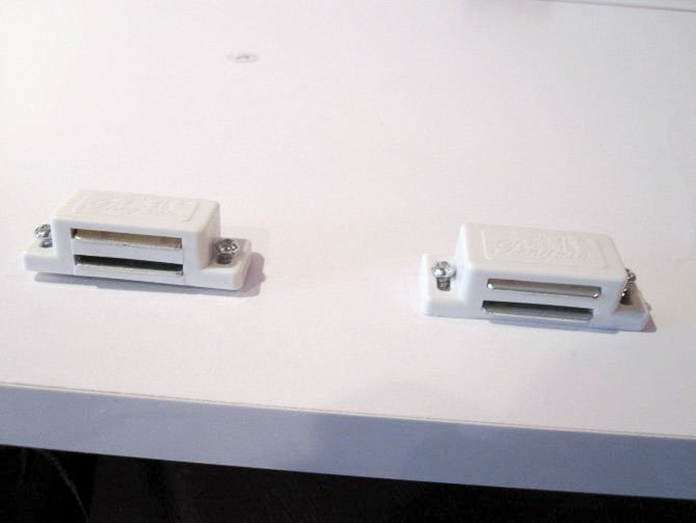 As with my previous experiences with putting together flat pack furniture, I worked slowly and carefully, and in the order given.

There were a few missteps along the way, like when I put some magnet door catches backward (there was no way to tell in the tiny illustrations).

More hilarity ensued when I installed the bottom of the left support panel upside down. This happened not once, but twice. I finally clued in when I realized I had to have access to the pre-drilled holes so that I could install the casters. I wrote myself a sticky note so I would not mess up a third time. 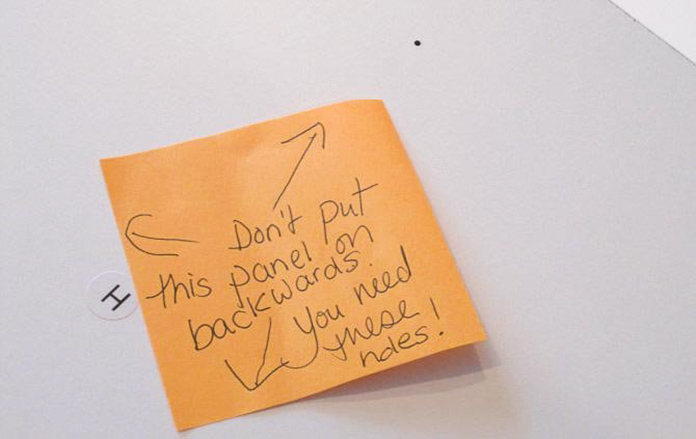 Note to self: See those pre-drilled holes? You need them for the casters at the bottom of the table. 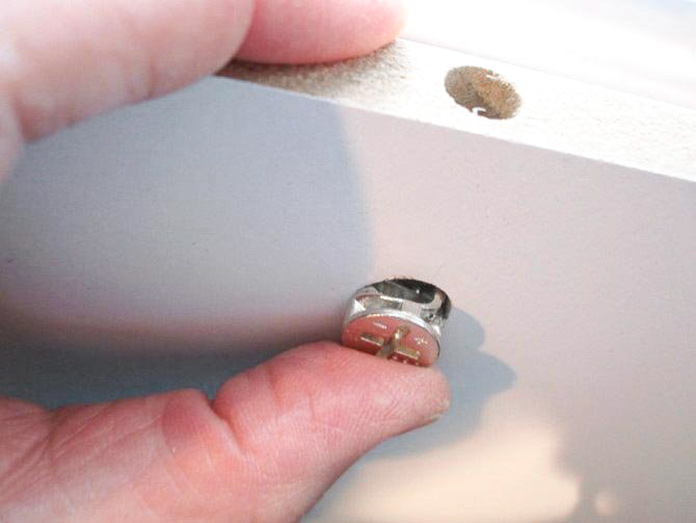 Cam lock nuts need to be installed in the open position to make attaching things to other things much easier.

A word about the many, many cam nuts that keep this design table together. When you’re installing them, make sure they’re open to the pre-drilled hole on the inside of the panels (see photo). This is because there will come a point when the bolts have to slide into the cams. This won’t happen if the cams are closed and not properly aligned. Install them opened at the outset, and then the person holding the heavy part won’t become impatient and annoyed as you crawl around looking for the closed ones. Just sayin’ …

The table was constructed upside down to maneuver it easily. You’re going to need help again to set it right side up. You might have to find a different helper if the cam thing didn’t go well.

I also found that using masking tape to secure all the drawers and panels together, before lifting the table, made for a much easier flip.

Despite my best and careful efforts, I managed to install a shelf with the unfinished edge facing outward. Unlike fixing a wonky seam, a seam ripper was not going to help. I decided not to go back four steps (and getting the helper back to hold the heavy part with the cams). I’m going to get some tape from a home improvement store and finish the raw edge. 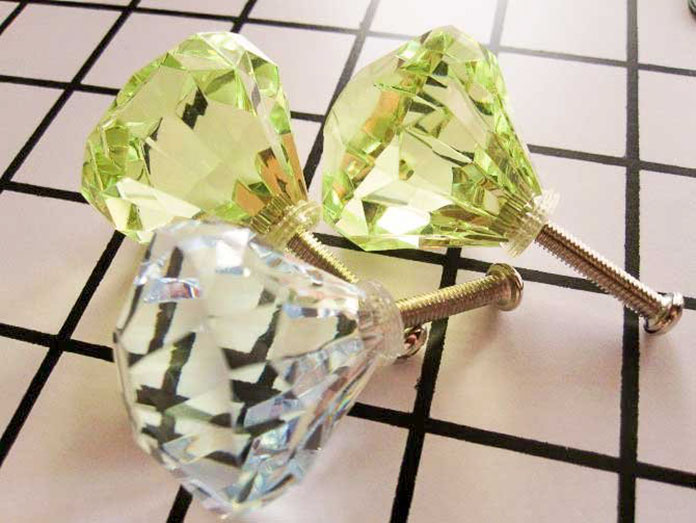 These will replace the black knobs that came with the Studio Collection Sewing and Design Table.

I’m also going to switch the drawer pulls from the utilitarian black plastic in favor of some pretty faceted glass ones.

I also installed two magnetized catches backward. That was easy to resolve, and now the back legs of the table snap into place, and stay there, to support the extended table.

The sewing and design table is greater than the sum of its parts, now that the table has been assembled. Come back tomorrow when we look at its features, and make a few things to improve the organizational capacities of the Studio Collection Sewing and Design Table.

Nancy Devine is a self-confessed craft-crazed blogger. She is a regular contributor to A Needle Pulling Thread Magazine, one of the administrators for The Craft Café, a Facebook page devoted to the international sharing of the creative life, and a curator of an impressive collection of fabrics, notions and seam rippers. In her spare time, she wrangles dust bunnies and writes a blog called Nancy Dee Needleworks. Understandably, her house is a mess.

4 essential stitches that add dimension to your...

Stay organized and sew up a Pretty Zippered...

Sewing up a sharp-looking pencil case for back-to-school

Sewing up 3 Too Cool for School pencil...

I use the Sulky brand often.

Well done getting it assembled!

I bet you didn’t know you needed to be an engineer did you?

Oh Nancy, you are a much better woman than me! I wouldn’t even attempt a job like this! I would send my engineer husband in to get this bad boy done, then promise him a 7-course dinner followed by a back-rub. Assembling ANYTHING just freaks me out. You have impressed me and I looove the idea of replacing those ugly black knobs with your gorgeous crystal ones! I can’t wait to see it all put together! You will show us a photo or two, right?

I have found it helpful to read instructions at least once, if not twice, before beginning. That way, the mind is already working on what has to be done.

I used empty wooden thread spools for handles on my sewing cabinets. Adds a little bit of whimsy.

3 solutions to stop thread breaking when...