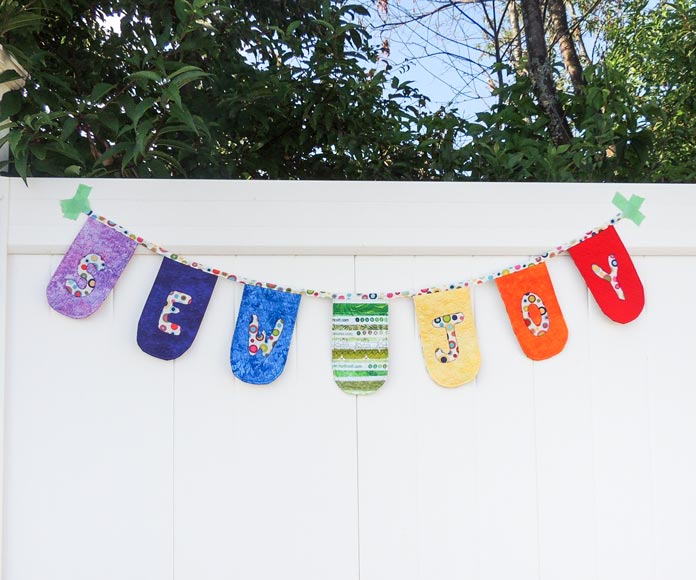 To finish the banner we first need to sew the backing fabric to each of the sections. If you haven’t already, cut a backing for each fabric using the banner template.

To sew the backing fabric to each section I used my neutral thread.

The quilt expression 720 will need a few accessory changes to get ready too. 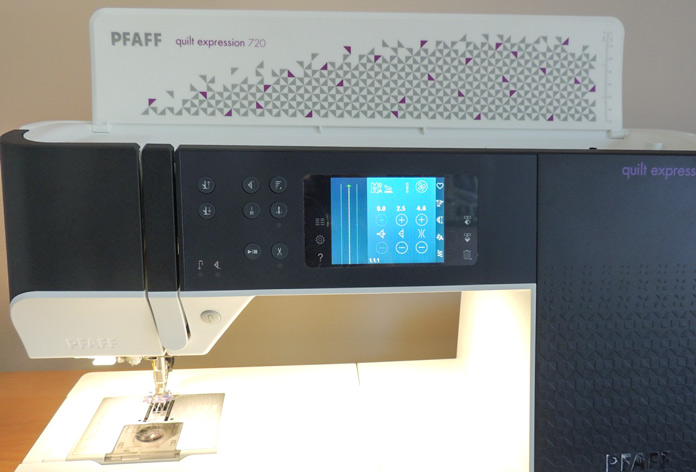 The machine comes with a straight stitch plate and I inserted it now to do the rest of the stitching. I also switched to the ¼″ quilting foot that is included with the machine. 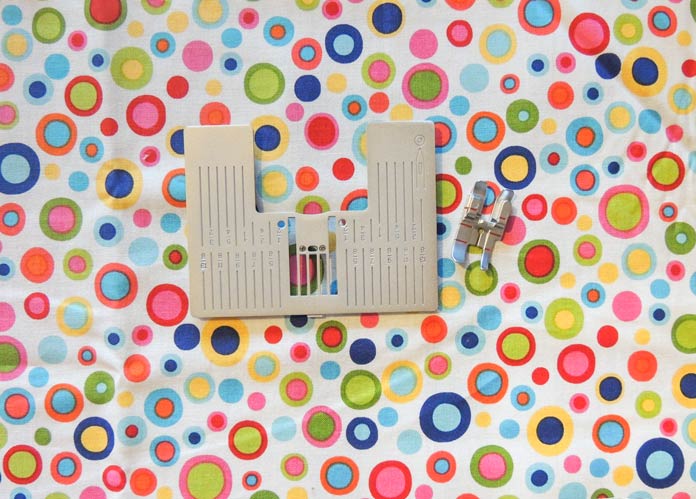 With right sides facing, sew the backing fabric to a quilted front banner section leaving the top edge open. The outer edge of the ¼″ quilting foot is a ¼″ away from the needle and can be used to make consistent seam allowance; press the Needle Up/Down button and sew guiding the foot around the edge. 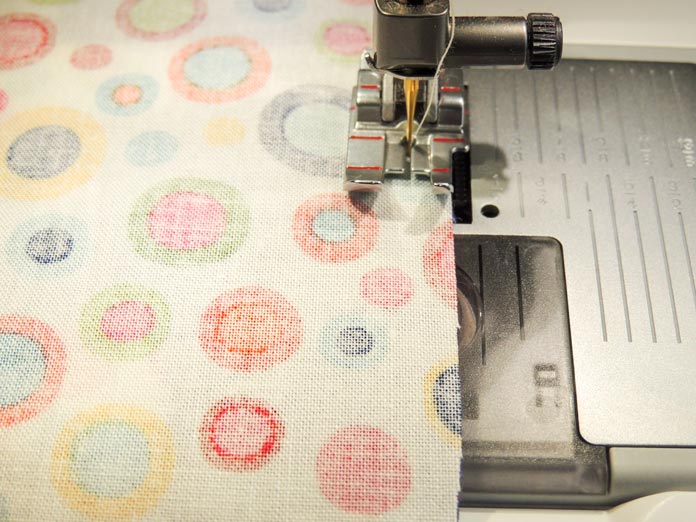 Sewing on backing with ¼″ quilting foot.

Turn the banner section right sight out through the top edge then smooth the section flat with your fingers. At this point I topstitched around each section using the same color thread that I used for the free motion quilting.

Here you can see my free motion quilting on the yellow section. I’m still using the ¼″ quilting foot for the topstitching because the inner edge is ⅛″ from the needle which is the typical distance for topstitching. Again using the Needle Up/Down button I’m able to guide the edge of the section smoothly under the needle.

I did the yellow and light purple sections first, then switched the thread and bobbin for each banner section and topstitched them. 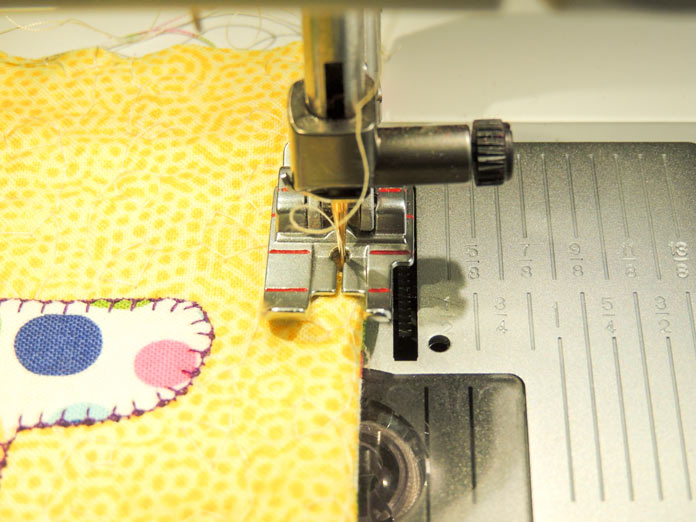 The banner sections are ready and now we just need the binding. I cut one strip of the backing fabric 1½″ x the width of the fabric which was 42″. I pressed a ¼″ hem to the wrong side of the binding.

Next lay out the letters in reverse order but with letters still in the correct orientation and then turn them over so the backing side is up. Fold the binding in half and mark with a pin, then pin the center of the middle section with the pin marking the center of the binding on the non folded edge. Pin the sections to the binding leaving approximately 2″ space between them – I used the lines on my cutting mat to help with this step. See the photo below! 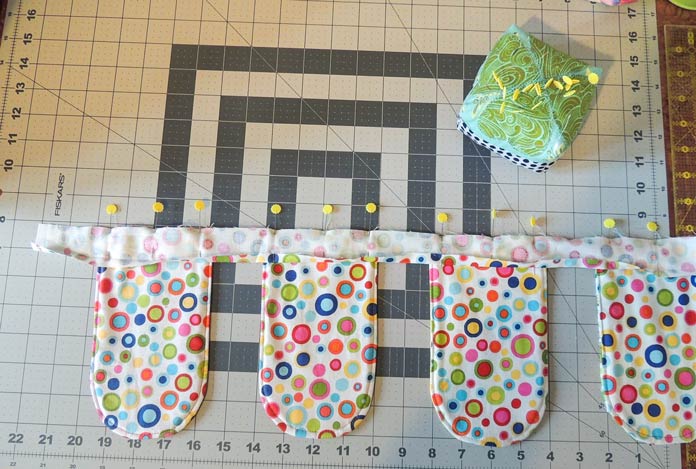 Pinning the binding to the back of banner sections 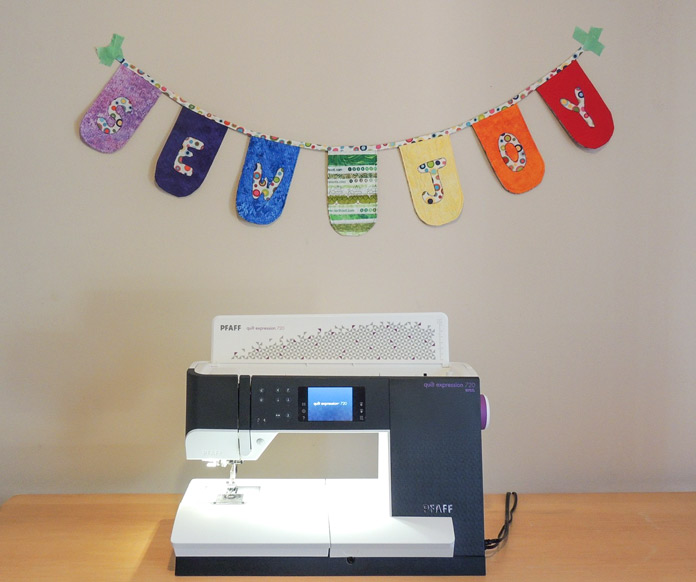 It’s not even time for school yet and I’ve learned something new! It was so satisfying to see my completed banner. I love looking at the texture created by the free motion quilting. I know that it was the features on the quilt expression 720 that gave me the confidence to finally create this for myself. You can be sure it’ll boost your confidence too to free motion quilt. I wonder what I’ll create next!

This is part 5 of 5 in this series.
Go back to part 4: User-friendly free motion quilting with PFAFF quilt expression 720

5 days to sewing and quilting a fabulous picnic set

How to bind a quilt with challenging corners

Add a flange binding to your quilt for...

How to sew the perfect quilt binding by...

Celebrating the New Year in style with a...

Quilters can make buttonholes too with the PFAFF...

Love your tutorials – learn a lot from your page. This is something I definitely will have to try. Thanks

I so love this ty for sharing I am as sharing with my daughter too.

Quilters can make buttonholes too with the...

How to sew the perfect quilt binding...