When sewing, remember the 5 bobbins rule

Welcome back to QUILTsocial. This week, we’re checking out the Husqvarna Viking Designer Topaz 50. This is a sewing machine and also an embroidery machine with some great features.

Today I thought I would share some tips on cleaning out the sewing machine and let’s talk a bit about setting up your sewing space. It would appear that I’m a bit aggressive. Let me show you what I mean. 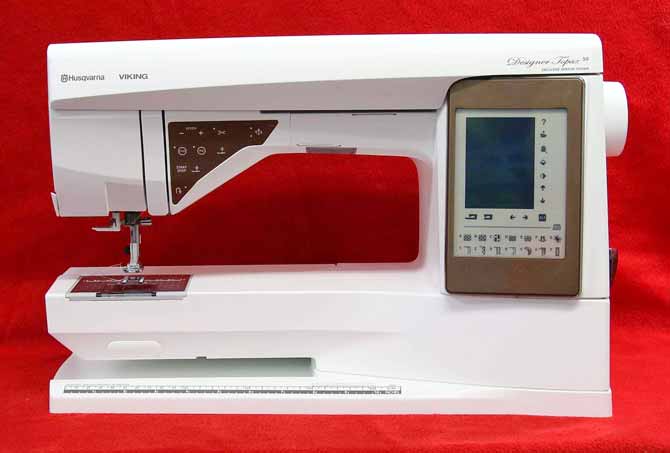 Despite having a very sturdy dedicated sewing table, I often end up sewing on a banquet table. It’s just easier to set up and tear down sewing machines as often as I do and well the real reason? My sewing table is a tad covered in projects. I can’t get near it!

This sewing skirt is all the rage. It seems that everyone I know has one. Most of the members of my sewing group have made one. They even bring it to our sewing retreats. A friend of mine made me one and I’ve been using it – sort of.

I believe it’s supposed to look like this. The top of the pockets is lined up with the edge of the sewing table. The pockets are supposed to hold your sewing stuff. Hmm, I only use three things when I sew – a quilter’s awl, a seam ripper, and my snips. Notice that NONE of them made it into one of the pockets. 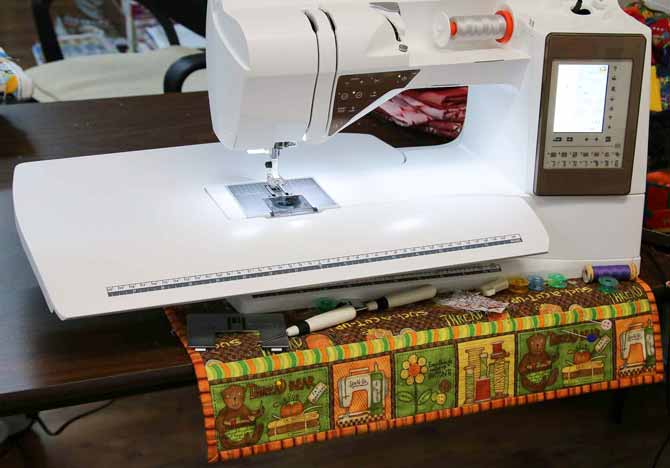 However, I noticed that this is more likely the way my sewing station looks. Notice how askew the sewing machine is? The top of those pockets is not lined up with the edge of the table at all. I’m often sewing large things, like putting the binding on a quilt and with all the manipulating and the smooth surface under the sewing caddy, it moves around a lot. I guess I could put a shelf liner under it? Or just not put the sewing caddy under my sewing machine but it does look pretty! 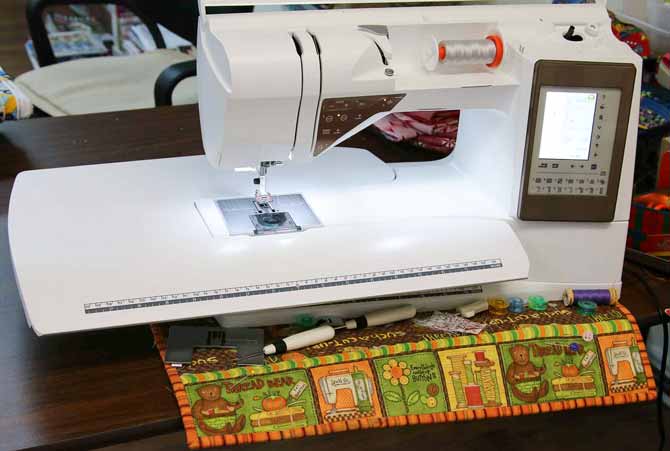 I’ll say that one of the best discoveries I made regarding my “aggressive” behavior while sewing was the use of the outdoor mat under my foot pedal. The foot pedal stays put. No more reaching, no more runaway foot pedal. I love this and the mat is super easy to keep clean. I ran the vacuum over it just before taking this picture and all the dust and threads are easily removed. That is very important to me as if the tool/gadget isn’t easy to use or easy to clean, it’s gone! 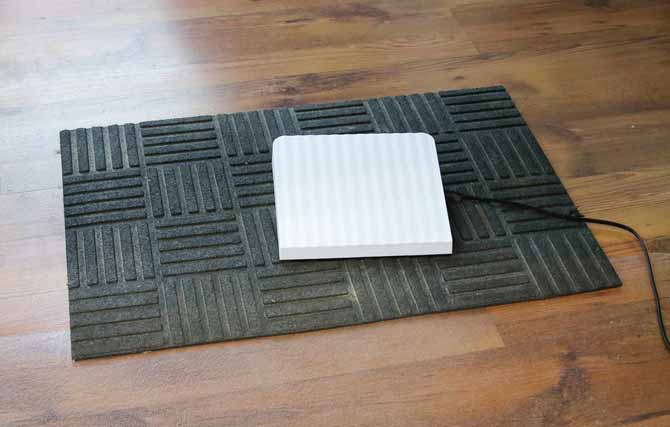 As I was busy sewing the other day, I got the Low Bobbin Notice that pops up on the Interactive Touch Screen. Normally this isn’t a worry as I keep wound bobbins ready to pop in. However, this was the last of my five bobbins. Darn – that means, it’s time to clean the bobbin case.

I thought I would share the experience with you so you can see how easy it is to clean out the bobbin case on the Designer Topaz 50.

In the photo below, I have removed all the parts necessary to clean out the bobbin area. I’ve even removed the actual bobbin case. Don’t worry, I’ll show you how it all goes back together. 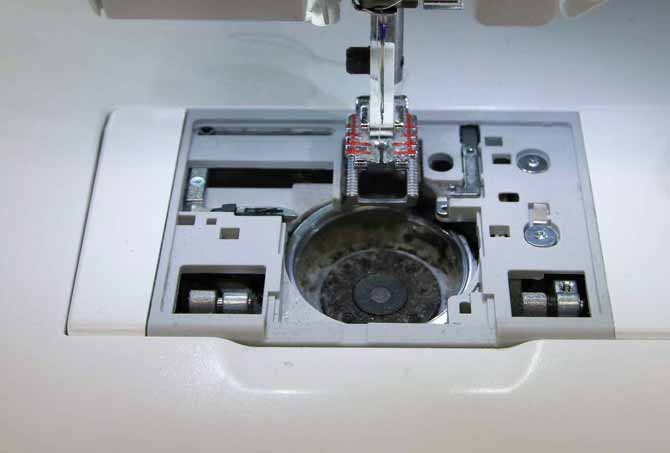 Preparing to clean out the bobbin case area 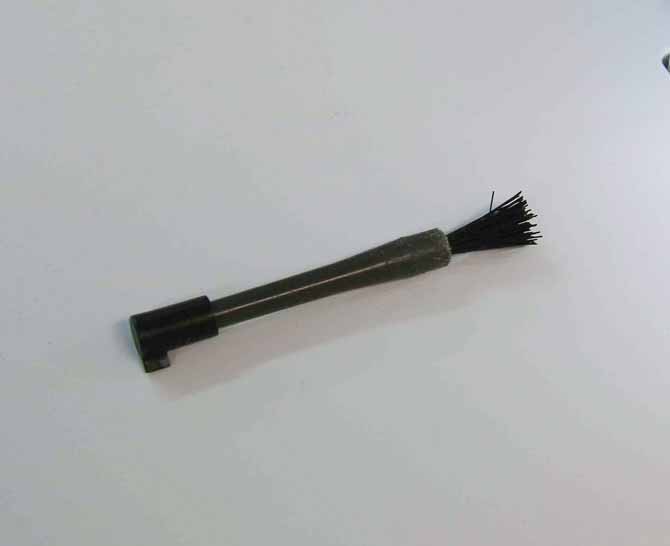 Brush for cleaning the lint from the sewing machine

The first step to cleaning out the bobbin case area is knowing that you should do that cleaning on a regular basis. Many people don’t realize that a build-up of lint in this area can greatly affect the tension on your sewing machine.

Look at that lint! 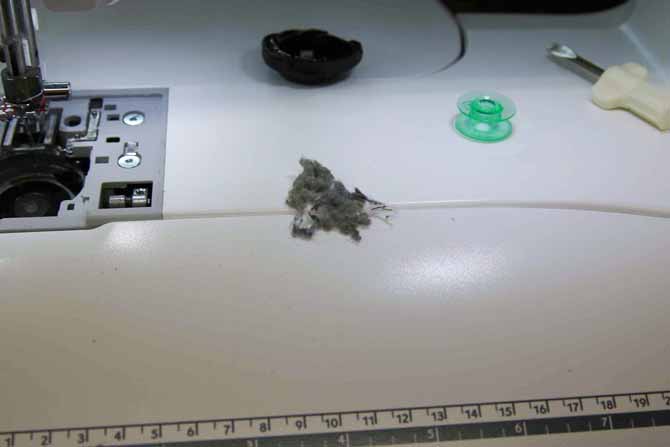 Lint that was removed from the bobbin case area 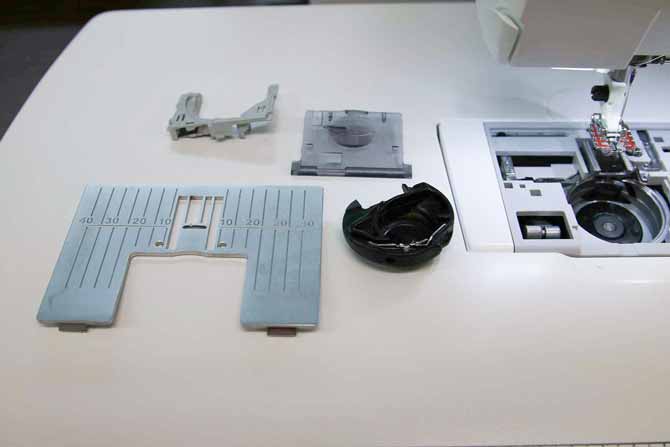 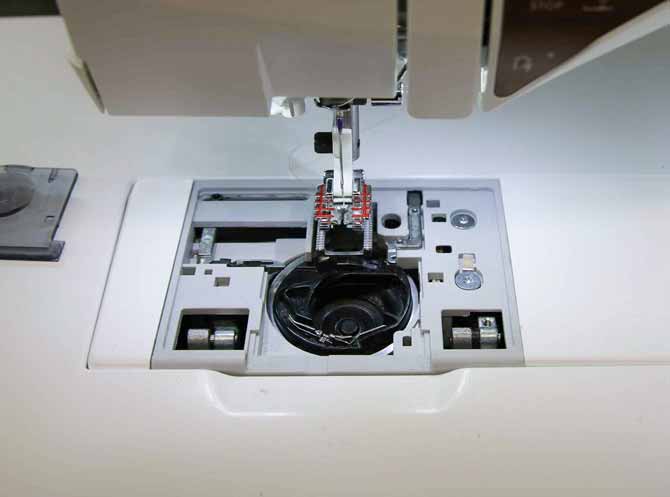 Bobbin case is back in place 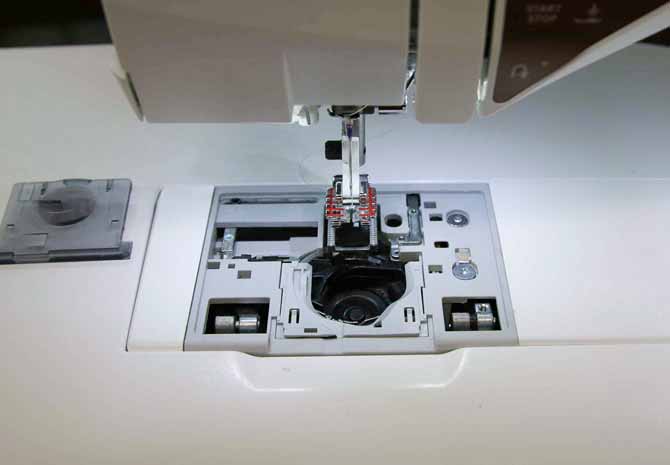 Bobbin case holder is in place

The metal needle plate goes on next. It’s important to get the back of the needle plate in position first and then snap the front edges in place. 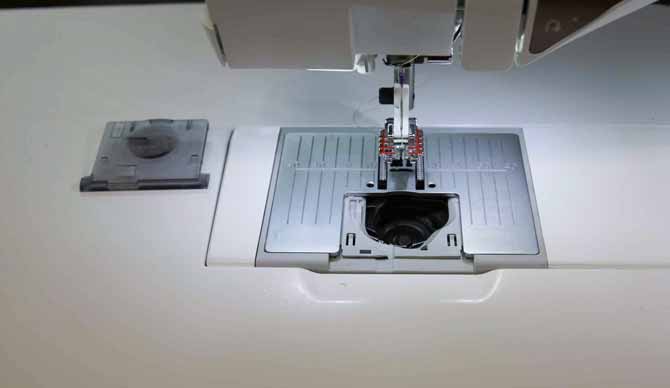 Needle plate has been snapped into place

There’s also a separate motor for the bobbin winder so if you’re embroidering, you could wind your bobbins at the same time. 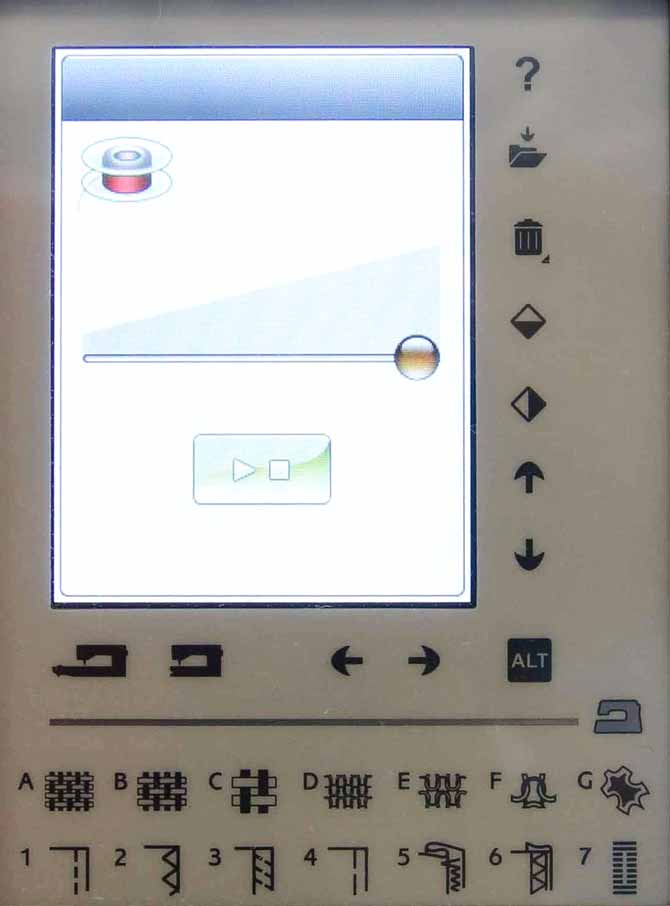 Speed is set for maximum, although there are five different speeds on the Designer Topaz 50

This process doesn’t take very long and yet it can keep your sewing machine sewing beautifully for a very long time. There’s NO NEED to oil the Designer Topaz 50. I like that – keep the maintenance simple. I like simple!

Tomorrow, I’m going to show you some of my favorite presser feet and some of the stitching that I did with the Husqvarna Viking Designer Topaz 50.

Be sure to come back!

This is part 3 of 5 in this series.
Go back to part 2: Exploring the Stitch Menus on the Husqvarna Viking Designer Topaz 50

Exploring the Stitch Menus on the Husqvarna Viking Designer Topaz 50

3 essential tips that takes stitching in the...

How to choose the right thread for your...

The power of paper, marker and clipboard for...

9 essential tools for successful quilting on your...

4 tips for trimming and thread organization for...

I have a opal 650. I use. I use the same rule for my bobbins & needle change. The only difference is I use 3 bobbins instead of 5.

Wow. Have never seen a bobbin case like that. About 3 years ago, I purchased my first new machine in 35 years. My new machine had a drop-in bobbin, which was new to me. The first thing I do when sitting down to sew, is to clean the bobbin case. It takes less than 2 minutes and is part of my getting everything ready to sew routine.

Hi Jane! I will remember your comment and put it in practice going forward, it’s a good habit to adopt! Thank you for sharing.