Yesterday on QUILTsocial we talked about using panels to make a quilt. Today I’m using my Brother NQ900 sewing machine to show you how to make flying geese blocks the no waste way! 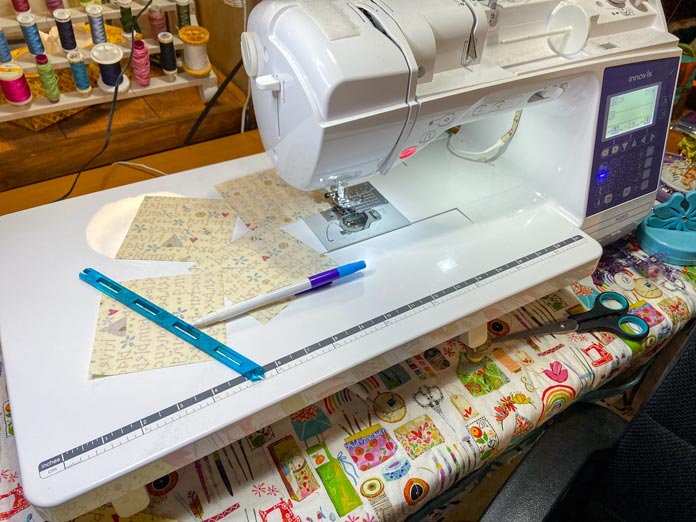 The first thing to decide when you’re making flying geese blocks is what fabric will be the geese and which fabric will be the sky. The geese are the large triangles, and the sky is the small triangles on either side. I’m making three different colored geese but I’m using the same sky fabric for all of them.

Step 2 Decide on your size.

Once you decide on your size, calculate the size to cut your fabrics. For this method, take the finished width of the block and add 1¼” and cut a square of your geese fabric to this measurement. Since I want my blocks to finish at 6” wide, I cut my square of geese fabric 7¼” x 7¼” (this is the black fabric in the photo).

If you don’t want to do the math yourself, just type no waste flying geese measurements in your search engine and you’ll find many charts with all of the cutting directions listed. 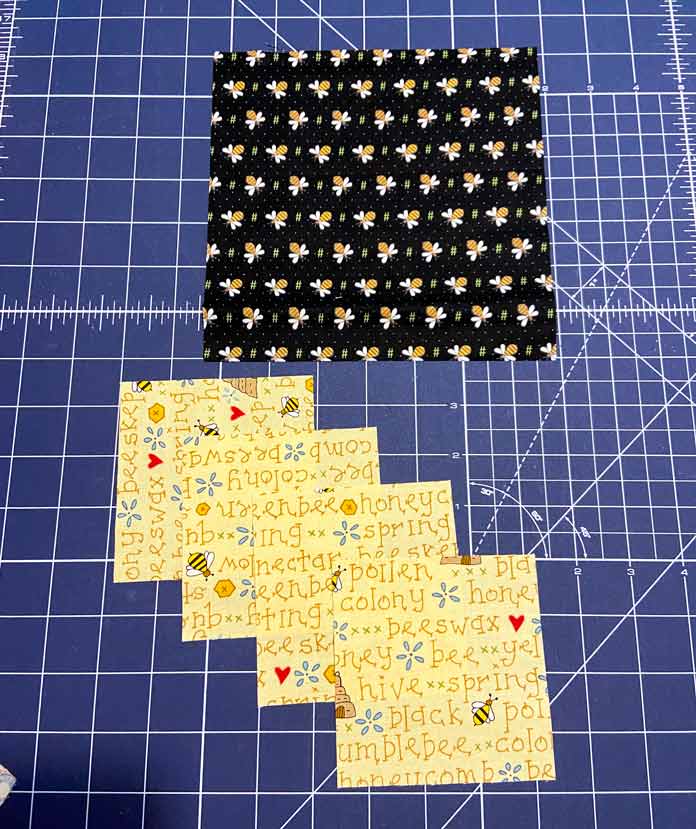 Draw a diagonal line on the back of the four blocks of sky fabric. These lines don’t show on the finished quilt so you can use any type of marking pen or pencil that you prefer. Mark the line from one corner to the opposite corner. 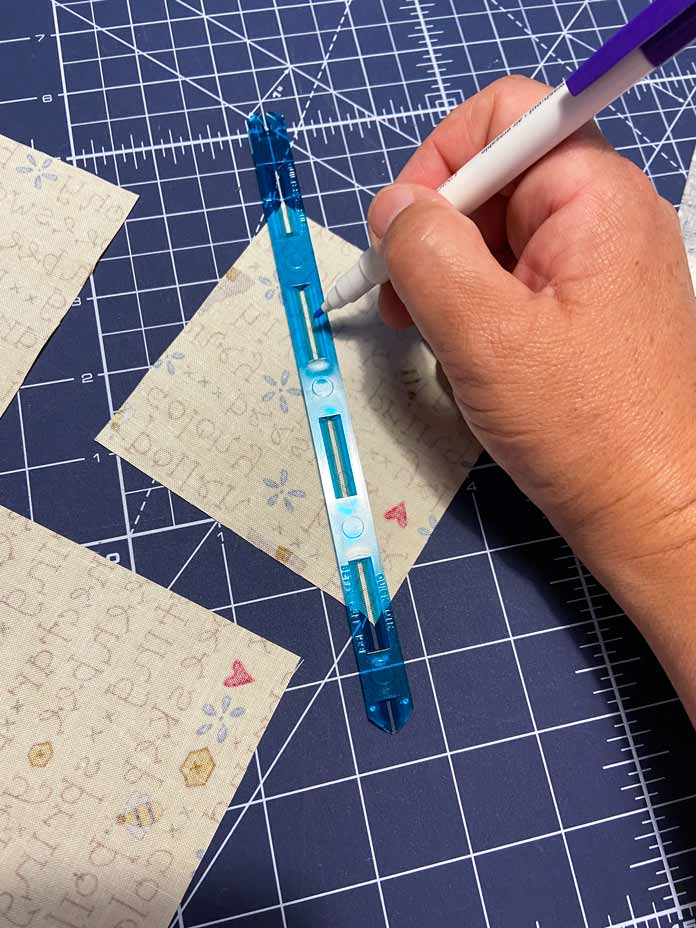 Draw a diagonal line on the back of the smaller squares. 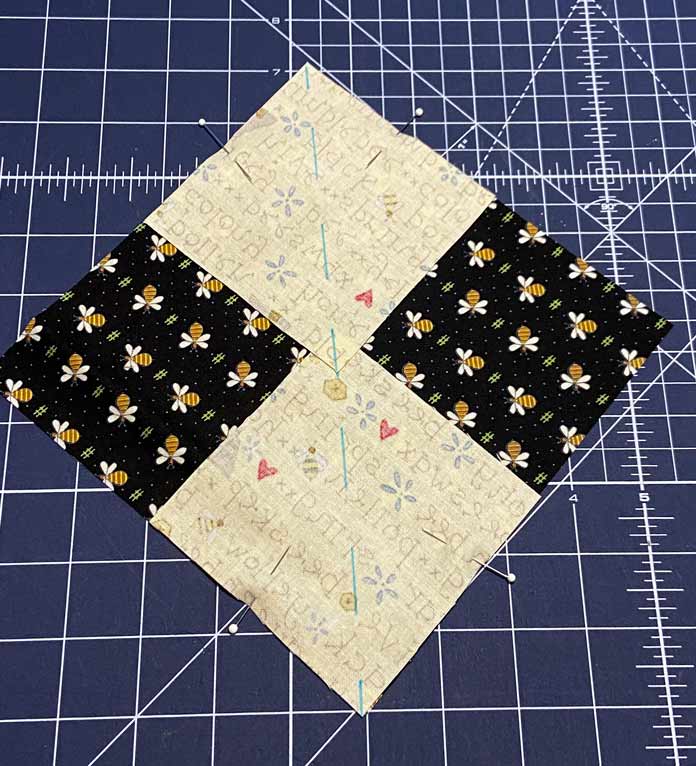 Pin two small squares to opposite corners of the large square of fabric.

Sew ¼” away from the line from one corner of the large block to the other. 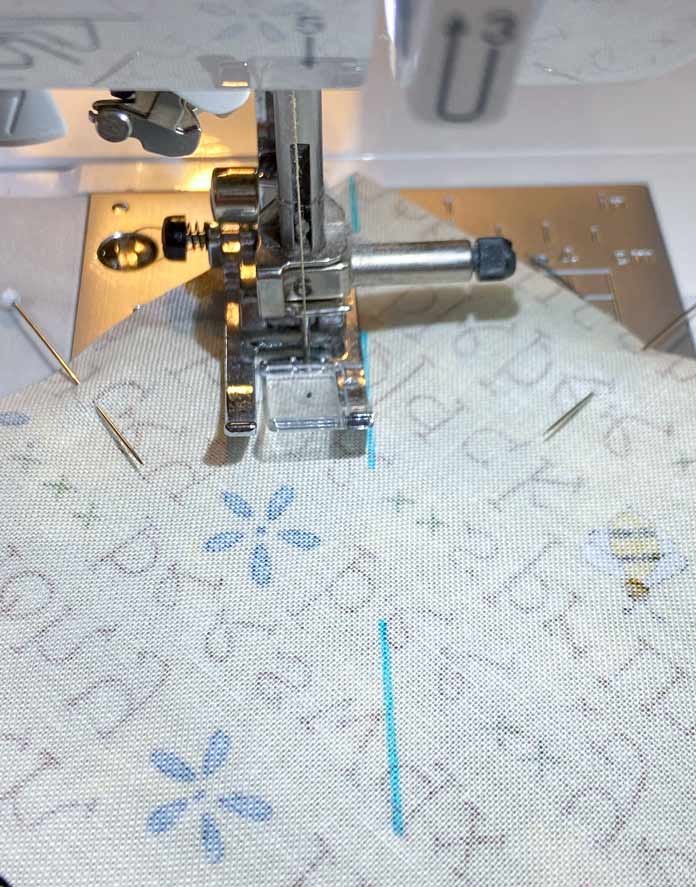 Sew from corner to corner ¼” away from the line.

When you get to the end, turn around and sew along the other side of the drawn line. 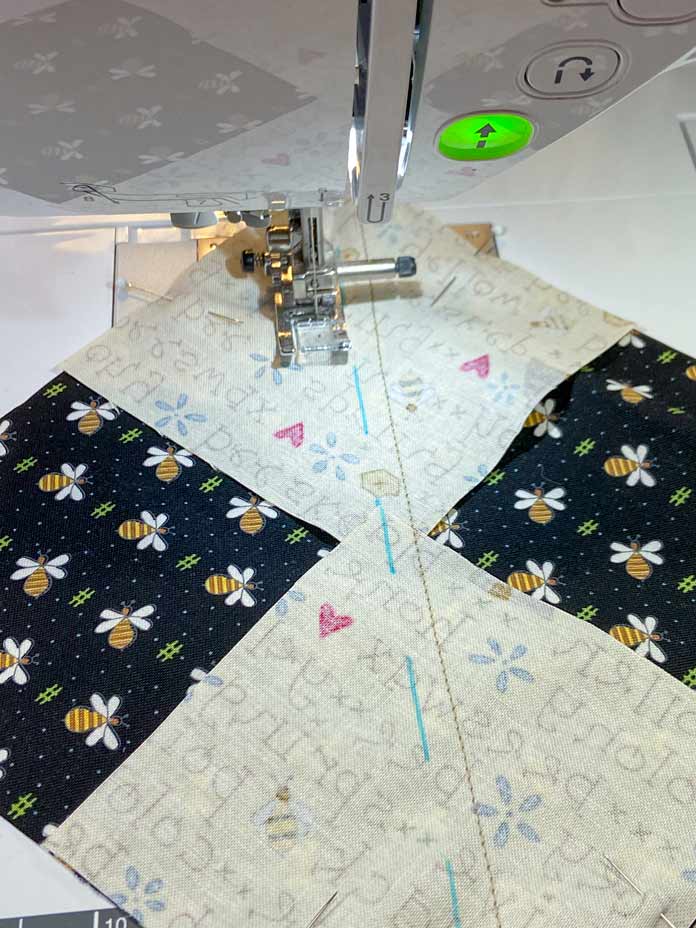 Sew on the opposite side, from corner-to-corner ¼” away from the line.

Step 7 Cut along the line.

Cut along the drawn line to separate the square into 2 triangular units. 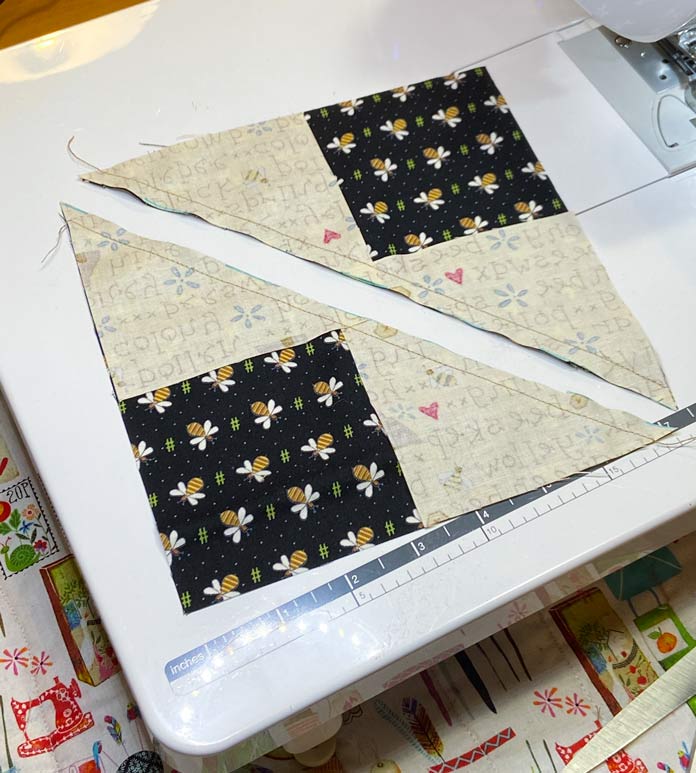 Cut along the line.

Press the small triangles and the seams away from the large triangle. 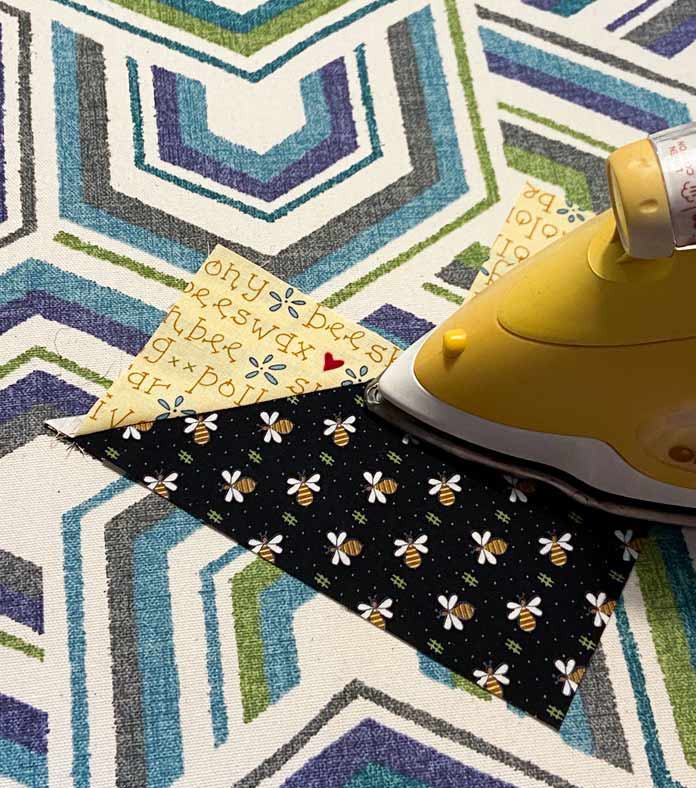 Press the seam away from the large triangle. 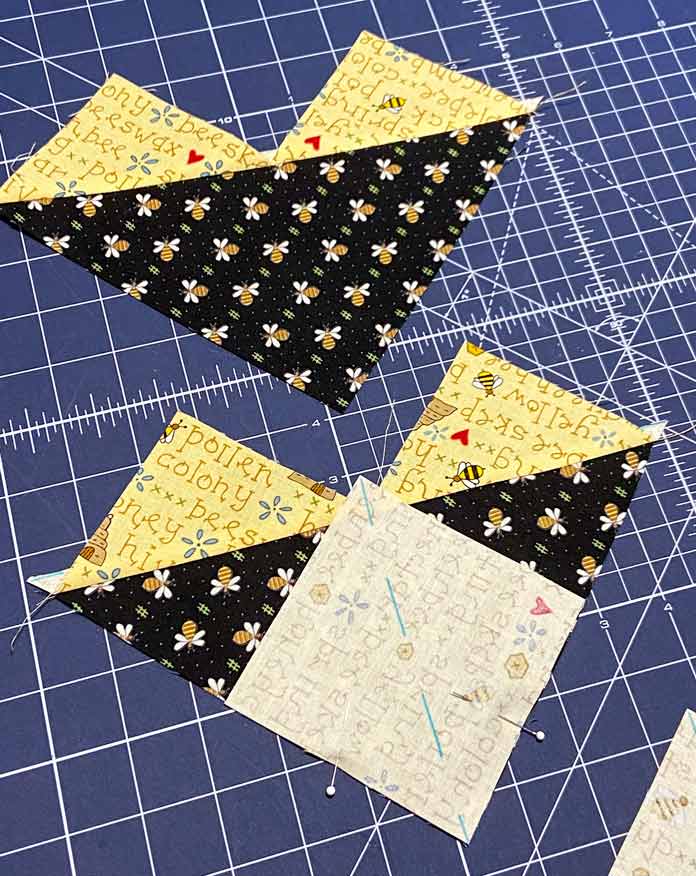 Pin the remaining small squares to the two units.

Sew down both sides of the drawn line leaving a ¼” seam. 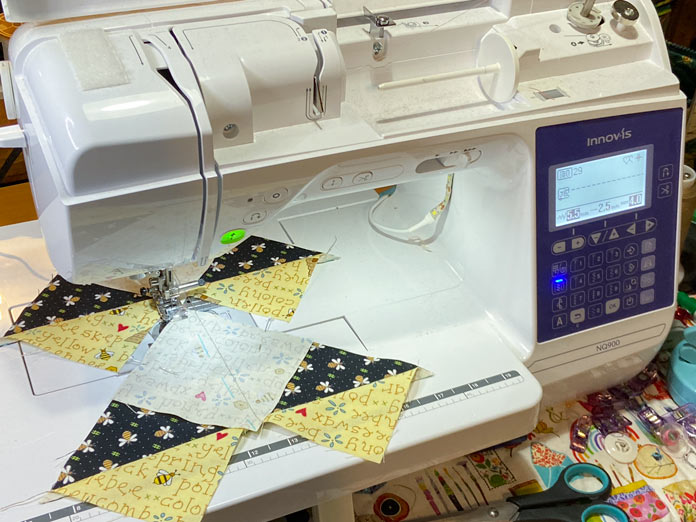 Sew down both sides of the drawn line.

Cut these two units in half along the drawn lines to make a total of 4 units. 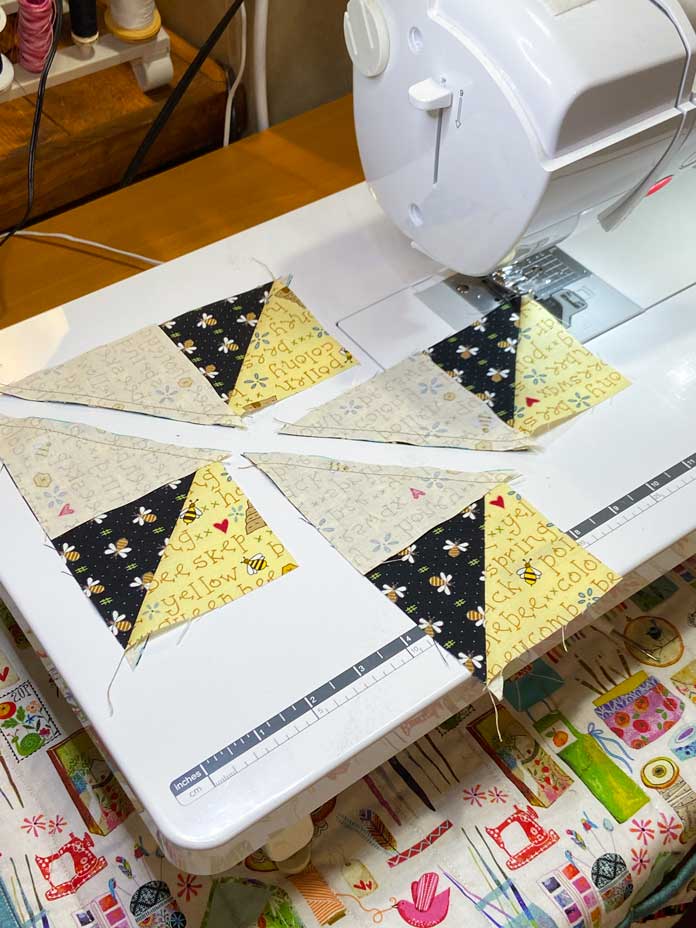 Cut along the line.

Press the small triangles and the seams away from the larger triangles. 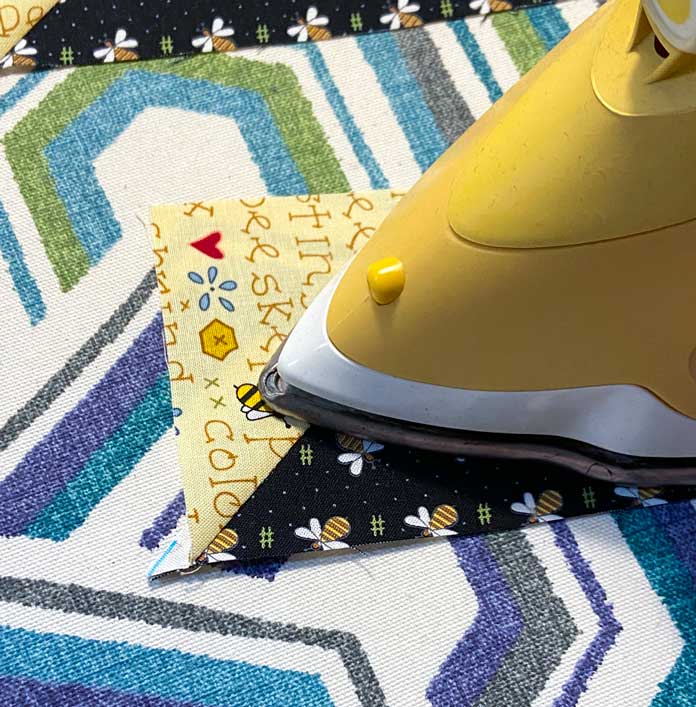 Press the seam away from large triangle. 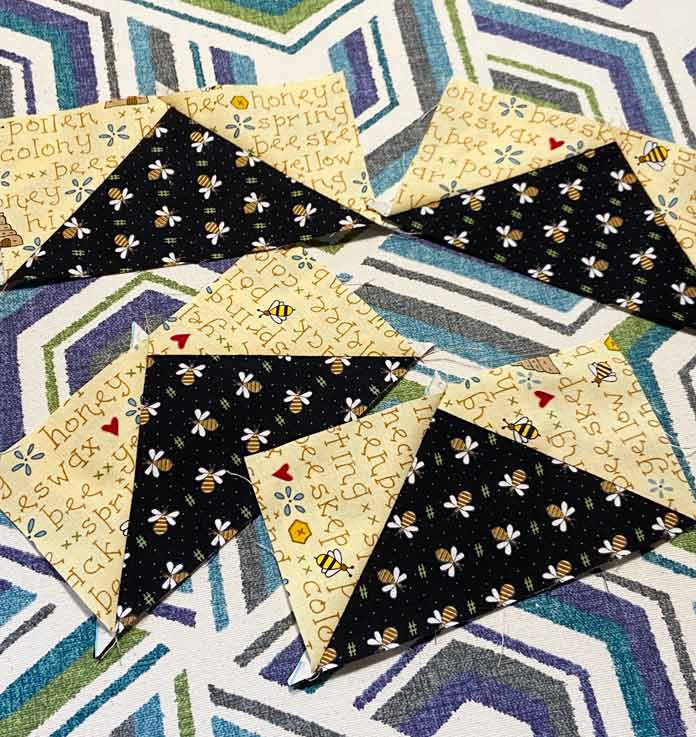 Repeat all these steps to make the total number of flying geese units you want for your quilt. I decided to make 24 flying geese units for my borders. Since I’m not putting them around the panel, it really doesn’t matter how many I have, but I’d like them to take up about half of the distance along each border. I think 5 blocks for each of the top and bottom borders and 7 blocks for each of the sides will work well. When you’re designing, remember that odd numbers of blocks or images are almost always better than even numbers.

Tomorrow I’ll use my Brother NQ900 sewing machine to sew these flying geese units into borders for my quilt. 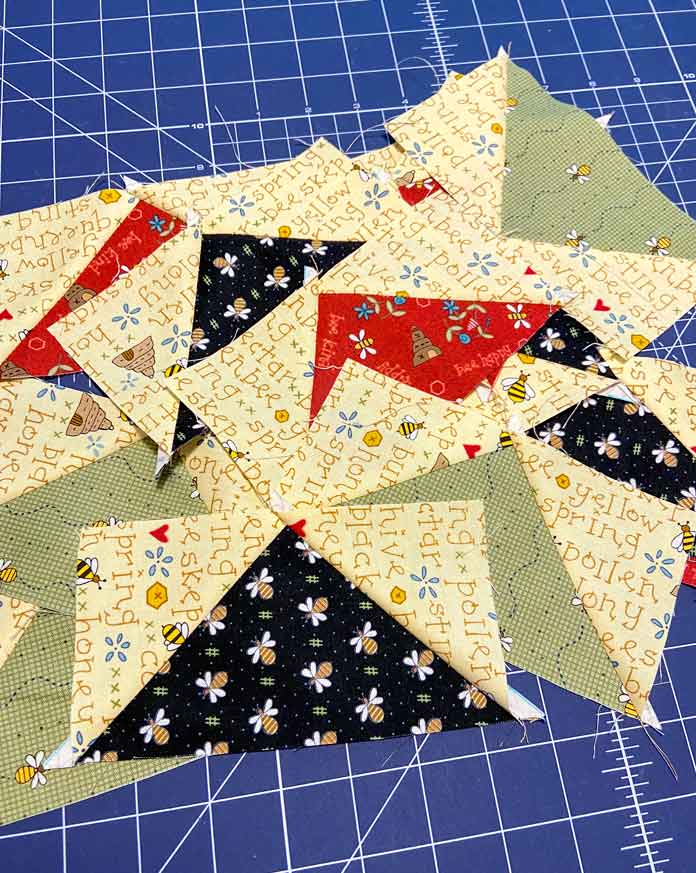 Now that I’ve got all of my flying geese blocks made, the next step is to sew them together to make the borders. That’s what we’ll do tomorrow – see you then.

Go back to part 1: Pieced borders for panels: QUICK and EASY for any size!

Go to part 3: 4 tips for adding flying geese blocks to a border with the Brother NQ900

Pieced borders for panels: QUICK and EASY for any size!

Pieced borders for panels: QUICK and EASY for...

7 essential steps to sew together a needle...

5 simple steps to make pockets for a...

6 features I love on the Brother...