Yesterday on QUILTsocial we made 24 flying geese units using the no waste method. Today I’m using my Brother NQ900 sewing machine to sew these units together to start making the borders for my quilt. 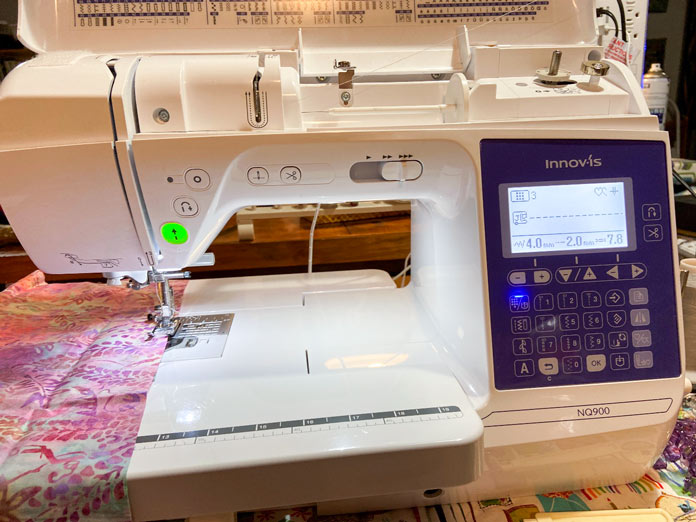 Since I have three different colors of flying geese blocks (red, green and black) I’m alternating them on my four borders. First, I’m sewing together four sets of black and red blocks so the points of the blocks are oriented in the same direction. 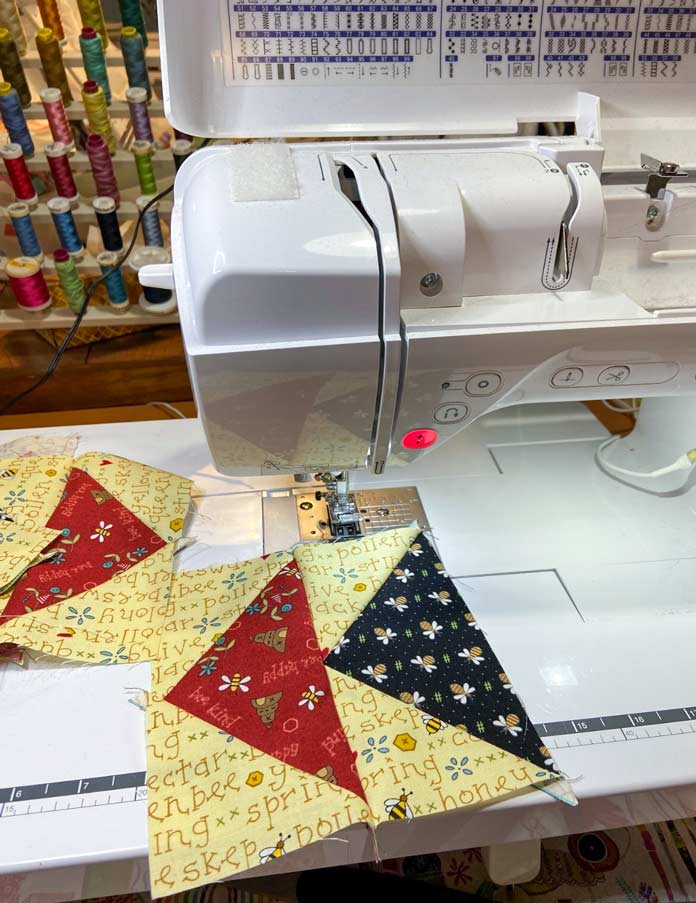 TIP 2 Press the seams in the right direction.

Now I need to press the seam between the two blocks with my Oliso Pro Smart Iron. I find it easier to press this seam towards the block on the top (the red block in my picture). This way the bulk of the seam from where the points meet is pressed toward the side that doesn’t have any bulky seams. 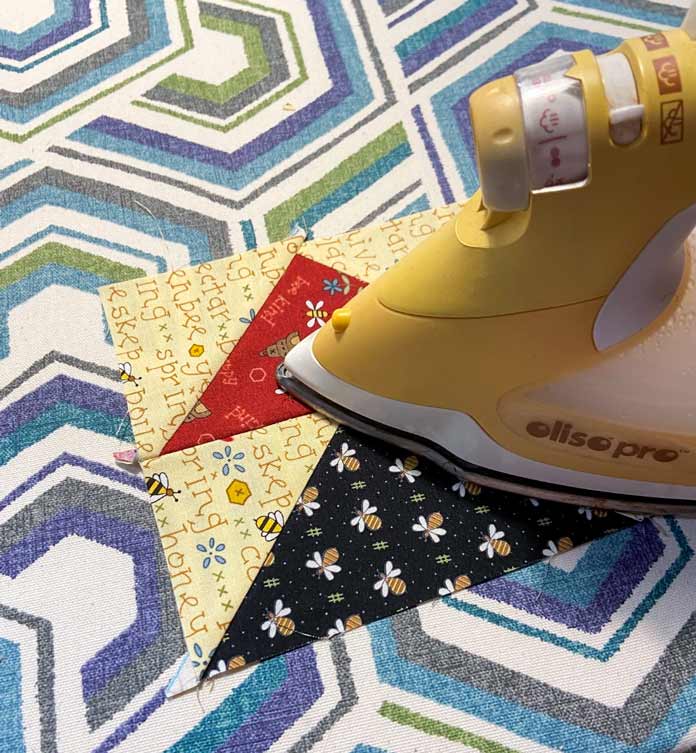 Press the seam away from the point of the flying geese block. 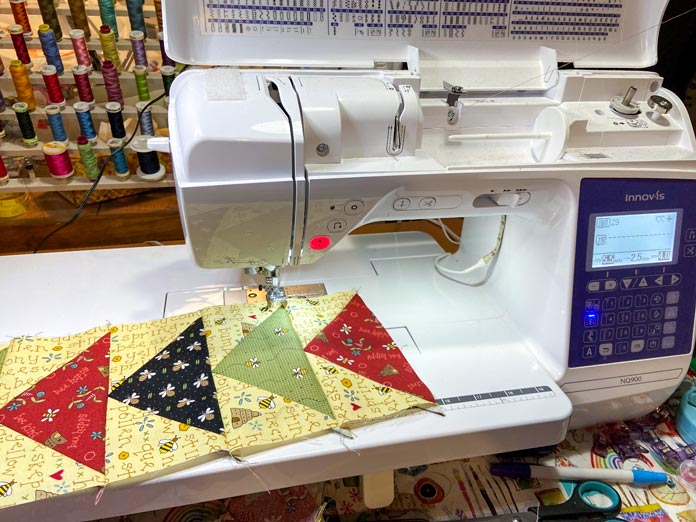 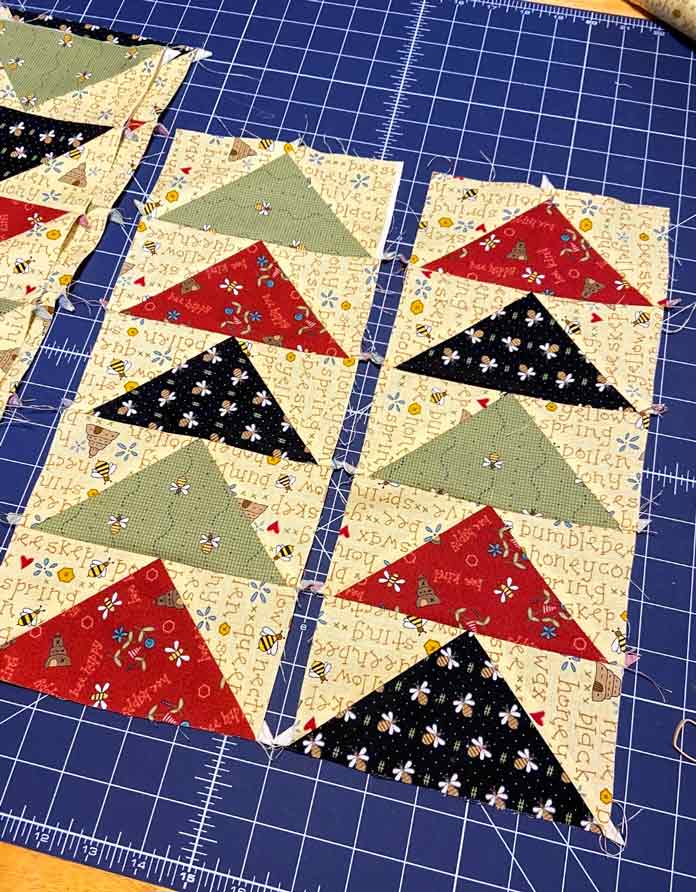 Two borders with 5 blocks each

As you can see, no two borders are the same! 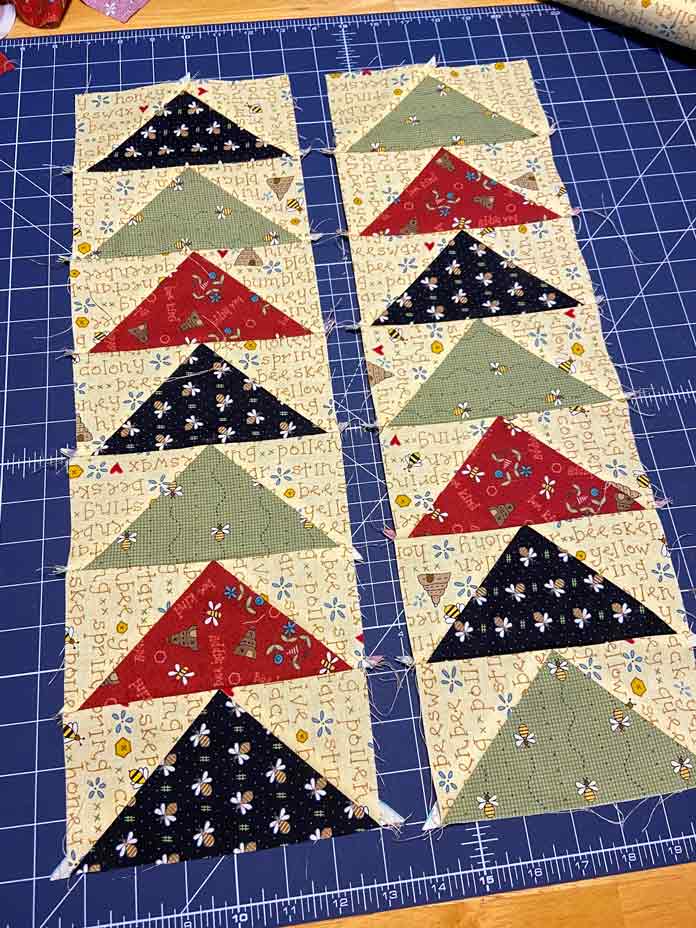 Two borders with 7 blocks each

I’m making these 4 borders long enough to fit the quilt by adding my yellow word fabric to the ends. Before you cut your border fabric, measure your flying geese borders with your ruler to make sure they are the width that you think they are – mine are 6½” wide. 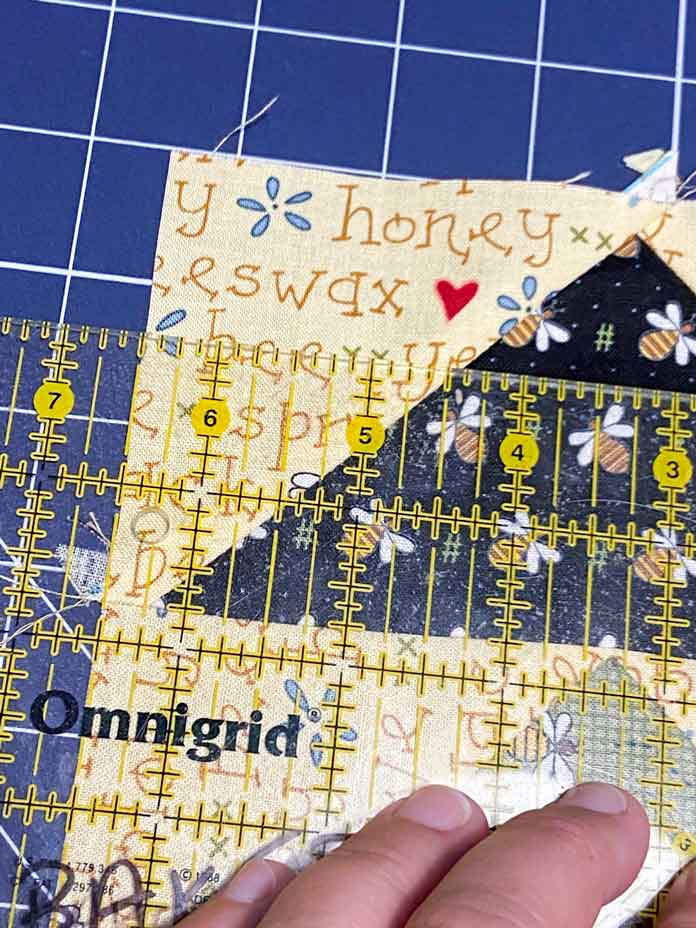 Measure the width of the flying geese blocks.

With your rotary cutter and using a cutting mat, cut four strips of your border fabric the width of your flying geese border (mine are 6½”) across the width of fabric (WOF), and then cut one square from two of these strips (again, mine are 6½” squares). Set aside the remainder of these two strips. 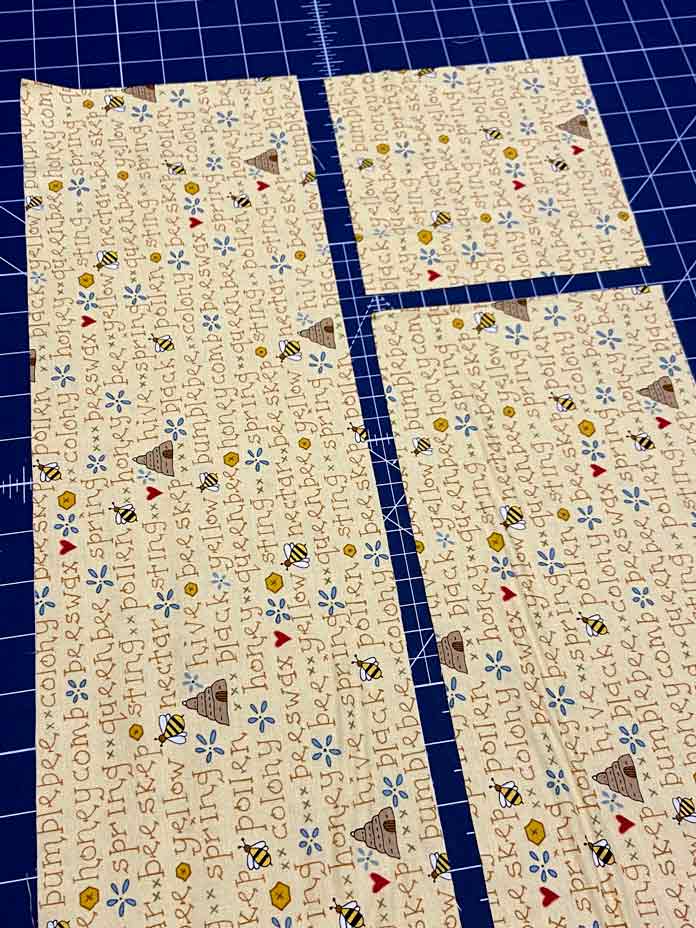 Cut one 6½” square from two of the WOF strips.

TIP 4 Make sure the blocks are pointing in the right direction. 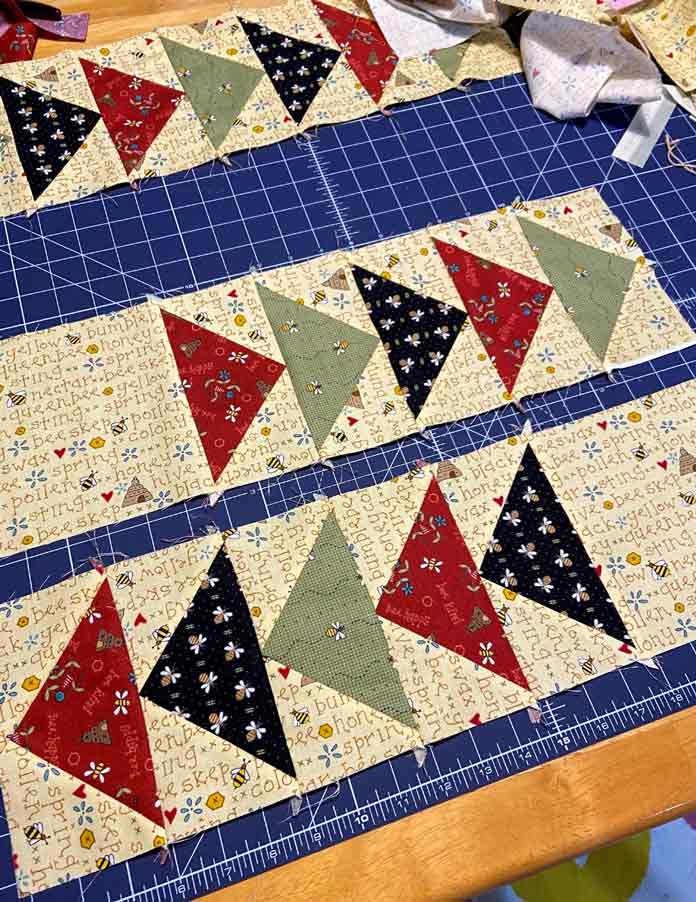 Sew the fabric square to the bottom of each of the shorter flying geese borders.

Sew one of the short strips of border fabric that you set aside earlier to the opposite end of one of your short borders (the end with the point). Repeat with the second short border. 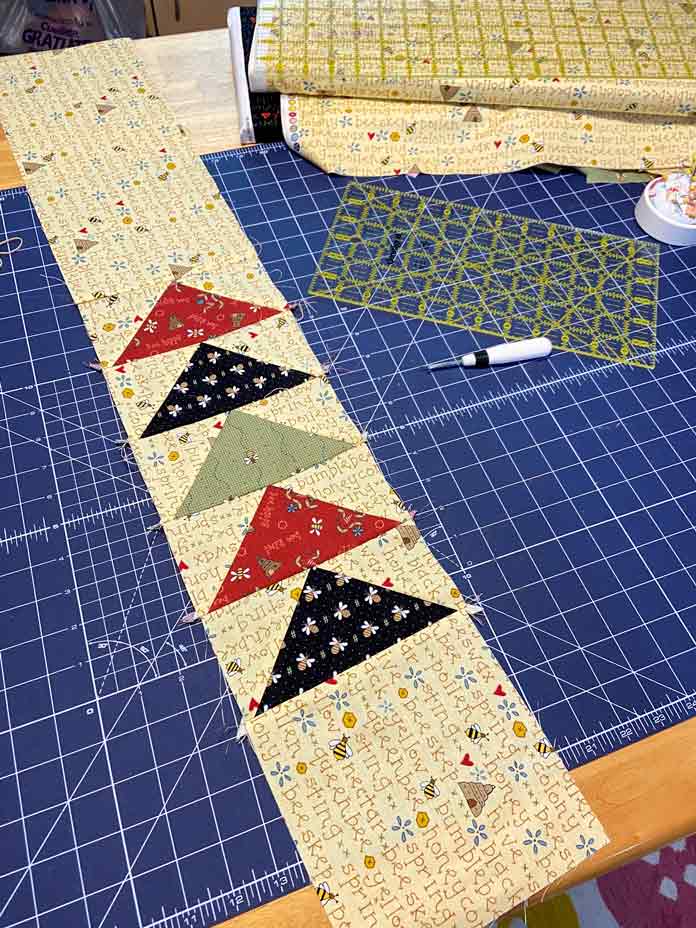 Sew the short border fabric strip to the opposite end of this pieced border.

Tomorrow, I’ll show you how I use my Brother NQ900 sewing machine to make those flying geese blocks appear to float on the outer border of my quilt. See you then.

Go back to part 2: 12 easy steps to making no waste flying geese – Pick a size

Go to part 4: 4 steps to adding a floating block border to your quilt top [easy tutorial]

Pieced borders for panels: QUICK and EASY for...

7 essential steps to sew together a needle...

5 simple steps to make pockets for a...

Save your selvages for a colorful sewing...