Yesterday on QUILTsocial I shared some great tips for more accurate rotary cutting. Today we’re going to create some Log Cabin blocks to use for my bed runner. Log Cabin blocks are very versatile and have been around for decades and today I’m going to talk about two different ways to make them.

For the first block, we’re going to cut all of the strips the exact length needed to sew to the block. For the second version we’re going to sew on the strips and then cut to the right length. Afterwards we’ll compare the two different ways to make log cabin blocks to see which way is fastest, easiest and most accurate.

Here are the steps for sewing the strips to the square to make the Log Cabin block. 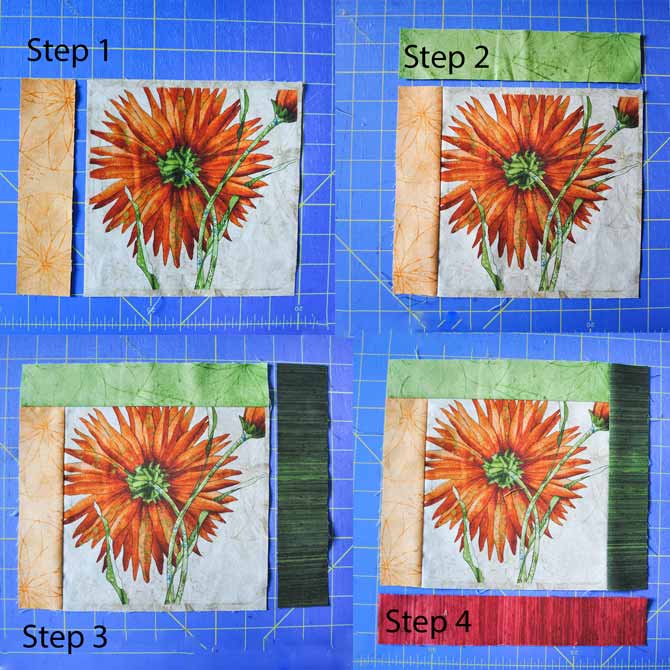 Keep going clockwise around the block adding the following strips:

Here’s the finished block – exactly 12” square and perfectly flat. This method is fairly easy, but time-consuming as you have to cut the strips ahead of time. If however, you’re making a bunch of blocks, you can cut all of the strips for all of the blocks and then chain sew to make your job a bit faster. 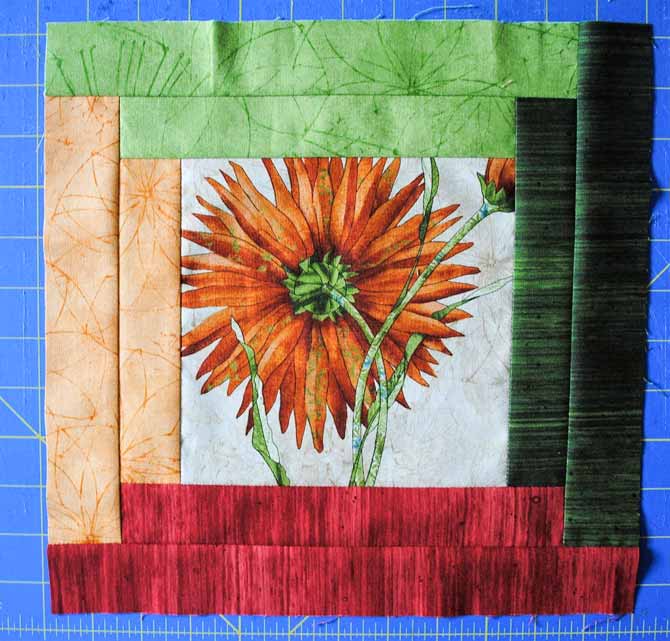 For the second version, we’re going to sew the square to each strip and then trim the strip to be even with the block.

Step 1: Sew one fabric #1 strip to the left side of one square.

Step 2: Press towards the strip.

Step 3: Trim the ends of the strip even with the square. 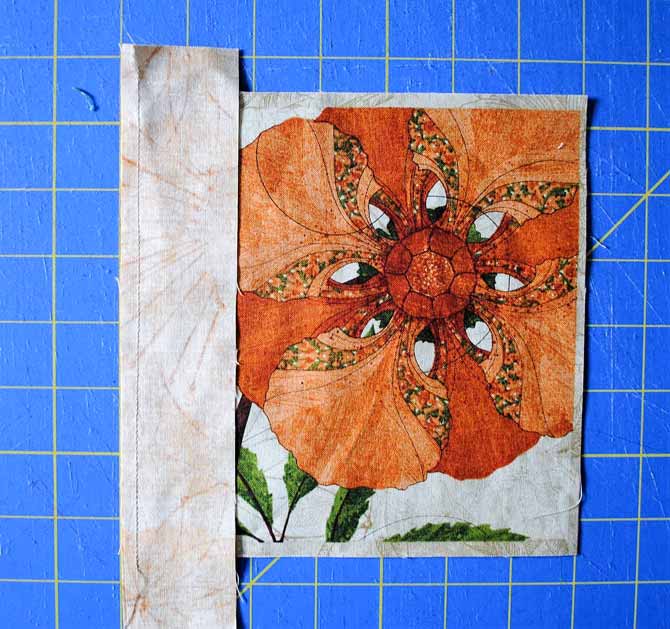 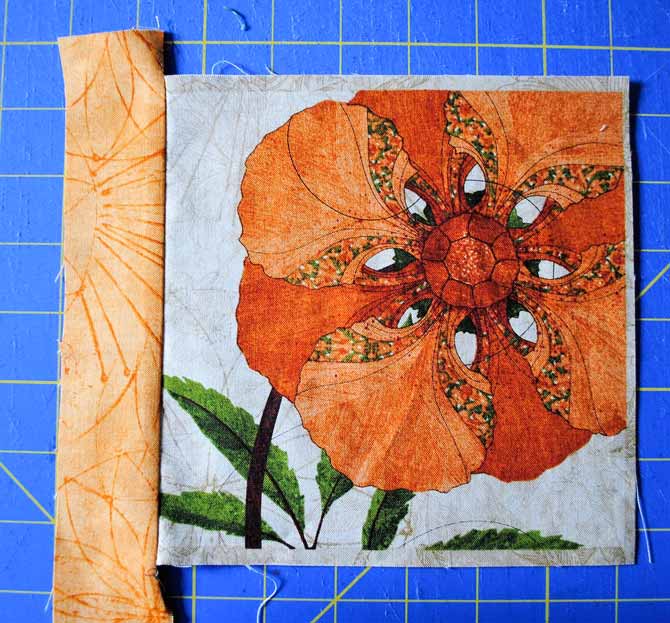 Step #2 – the strip is folded back and pressed 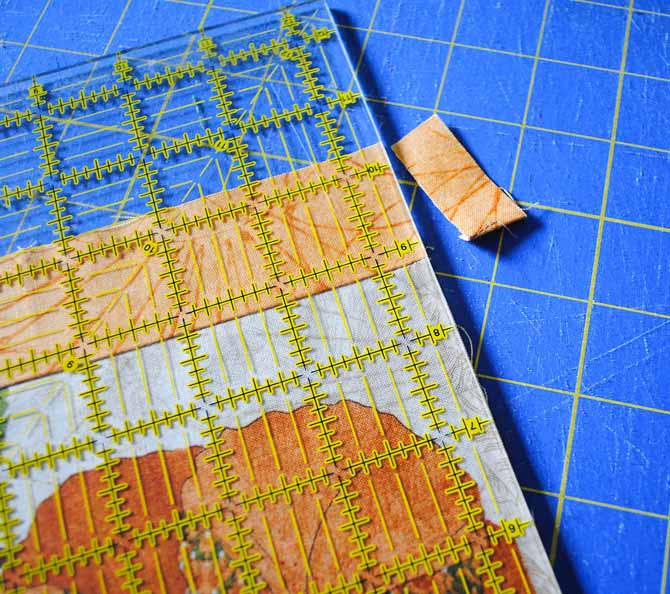 Repeat this process with fabric #2 sewn to the top of the square. Then continue with fabric #3 and Fabric #4 and then go around the block once more as we did in the first block. Your finished block should look the same as first block. If it’s a mirror image, then you sewed fabric #2 to the bottom of the block and then kept sewing in a counter-clockwise motion. 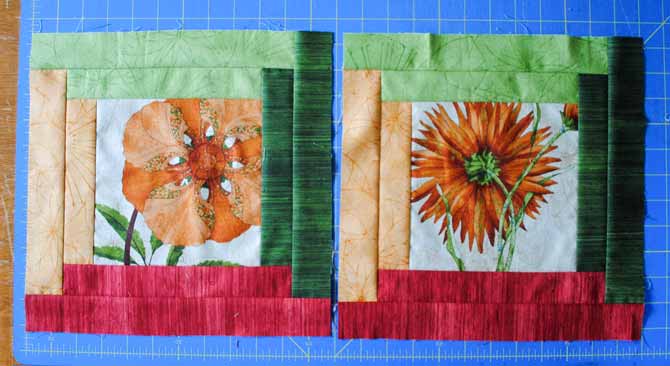 Measure your second block and see how it compares to the first. My second block ended up nice and flat, but it’s almost ⅛” smaller in both directions than my first block. It was definitely faster to sew up the second block, and for a project like this with only 7 blocks, it would probably be OK to use this method to make all of the blocks (as long as you were consistent in your sewing, all of your blocks should end up the same size). For a larger project with more blocks, however, I think using method one would give you a much more accurate block so that sashing and borders would fit better.

Either way, the blocks that I’ve made so far using Northcott’s Euphoria fabric look great and I’m going to continue on sewing until I have a total of 7 blocks. Try for yourself and see which of the two different ways to make Log Cabin blocks you prefer.

This is part 2 of 5 in this series.
Go back to part 1:  Use 2 rulers to rotary cut more accurately quilt fabric pieces

Go to part 3: The many ways to arrange Log Cabin blocks on your quilt

The many ways to arrange Log Cabin blocks on your quilt

I have enjoyed learning this cutaway method and look forward to trying it – thank you for this great tutorial.
Pauline

I like using the excess cutaway method – more accurate to me!

And WAY faster which ALWAYS appeals to me 🙂

Safely working on the bias: making a...