3 simple steps to embellish a tea towel with HSTs

Yesterday on QUILTsocial I showed you 4 different blocks that could be made using HST units. Today I’m using the Dreamweaver XE to embellish a tea towel with HSTs! Here goes! 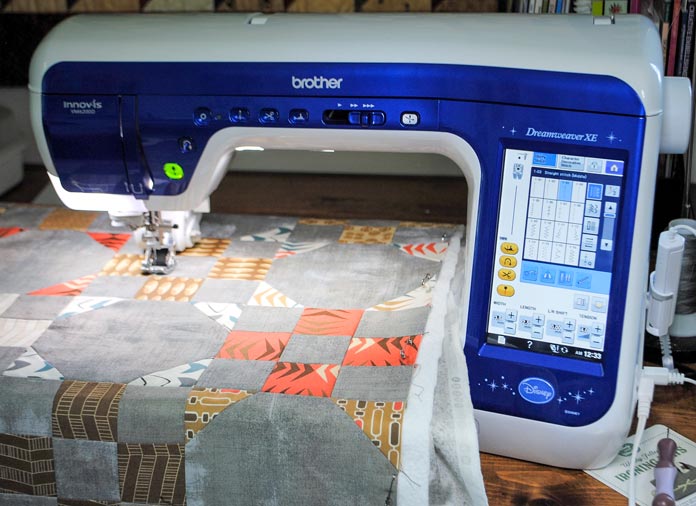 Since I never like to throw anything away, I seem to always have an assortment of different HST units on hand that have been made from the leftovers of either flying geese blocks or snowball blocks. 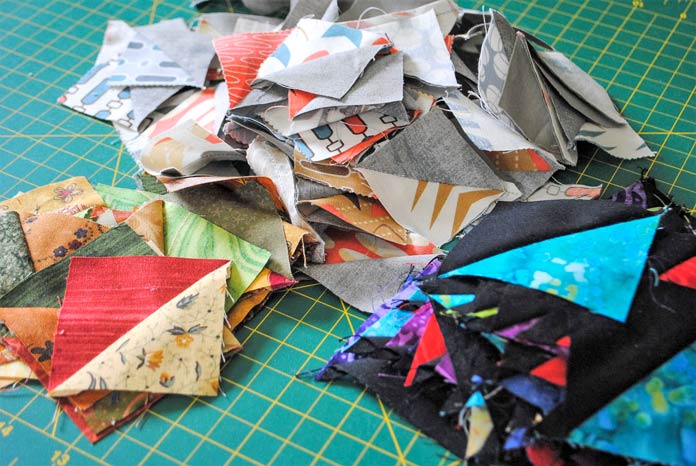 I’m happy to share how I’ll use the half-square triangle units (HSTs) that were made when I sewed the flying geese units for The Rainbow Within wall banner which was featured in issue 47 of A Needle Pulling Thread magazine. 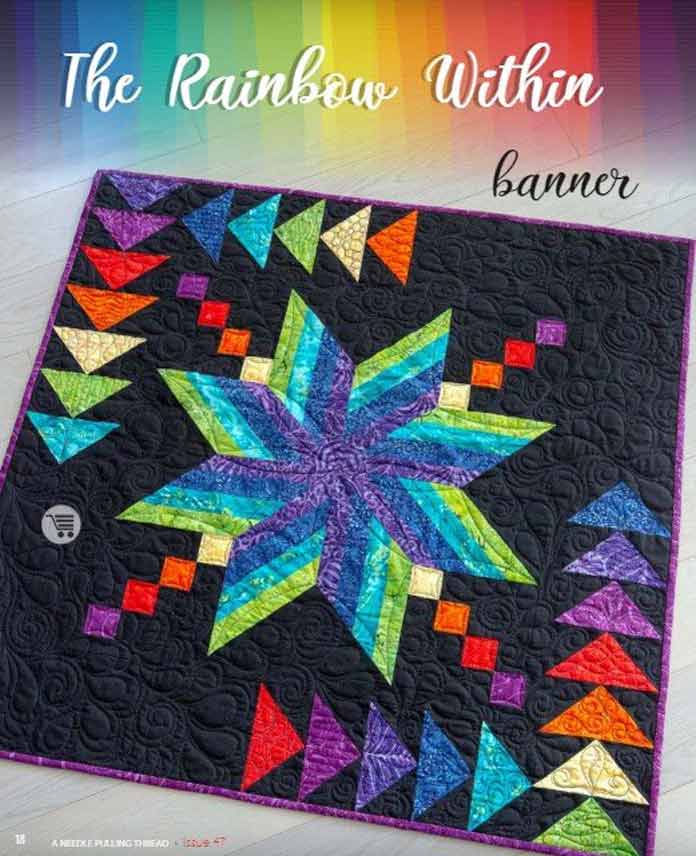 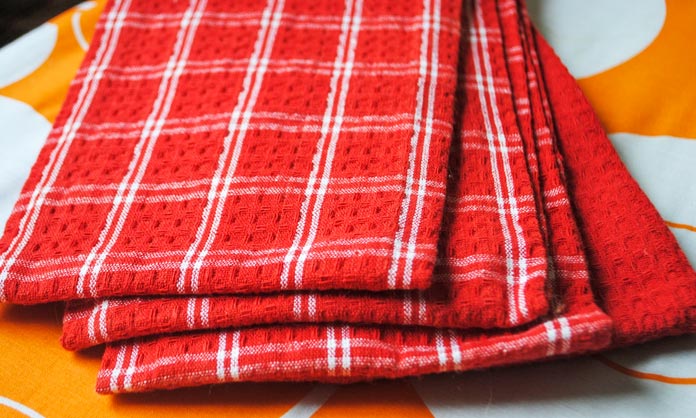 The first thing I did was to measure the width of the tea towel so that I knew how many HST units to sew together into a row using the Dreamweaver XE. 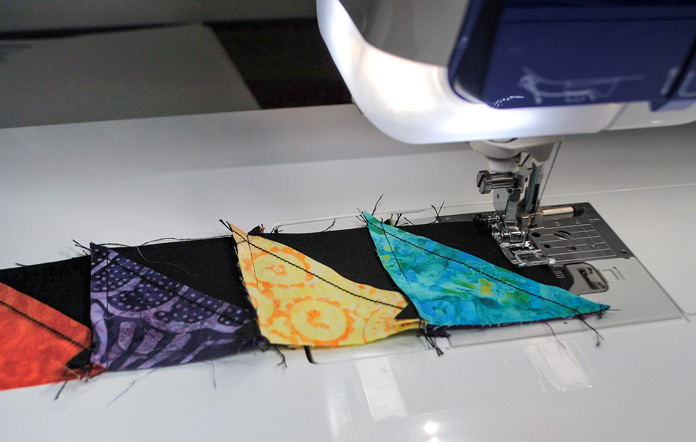 Seven HST units sewn together in a row ended up measuring the same as the width of the tea towel. If they had ended up a bit too long, I would have just centered the row on the tea towel and trimmed of the same amount on each end of the HST row. 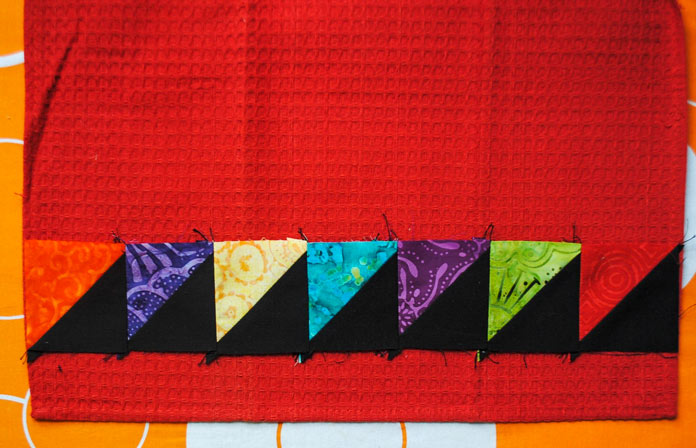 Now I want to cover the raw edges of the row using some edging strips. I cut enough 2″ strips of black fabric to go around all four edges of the HST row. 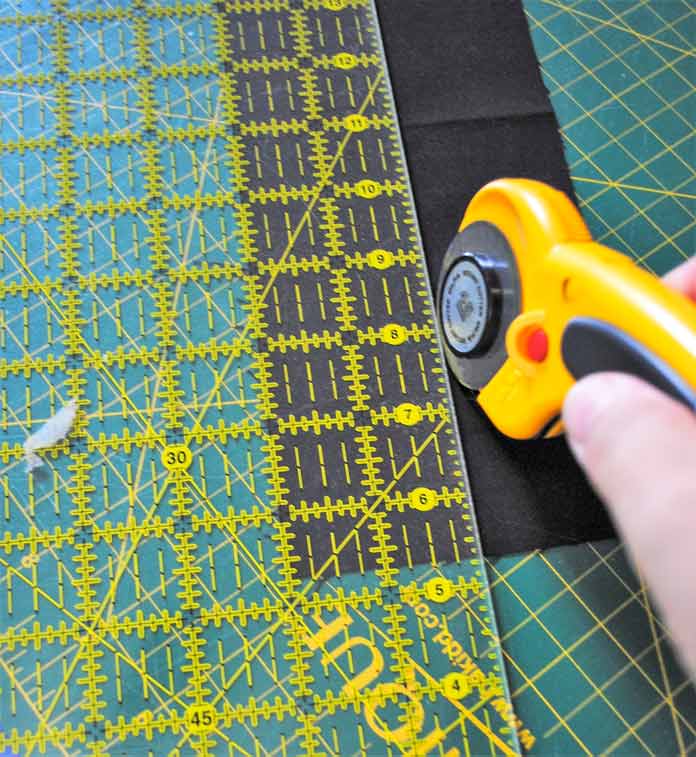 Next, I press the edging strip in half lengthwise using a hot iron. 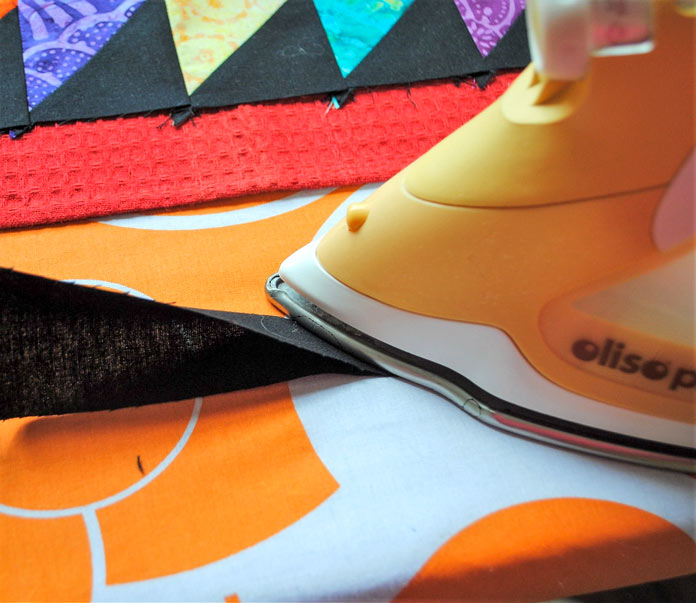 Now we’re going to sew the edging to the front of the HST row using a ¼” seam in the same way that we would sew binding on to the edge of a quilt. If you aren’t sure how to do that, check out some of my previous on QUILTsocial on the 10 simple steps for binding with perfect corners. 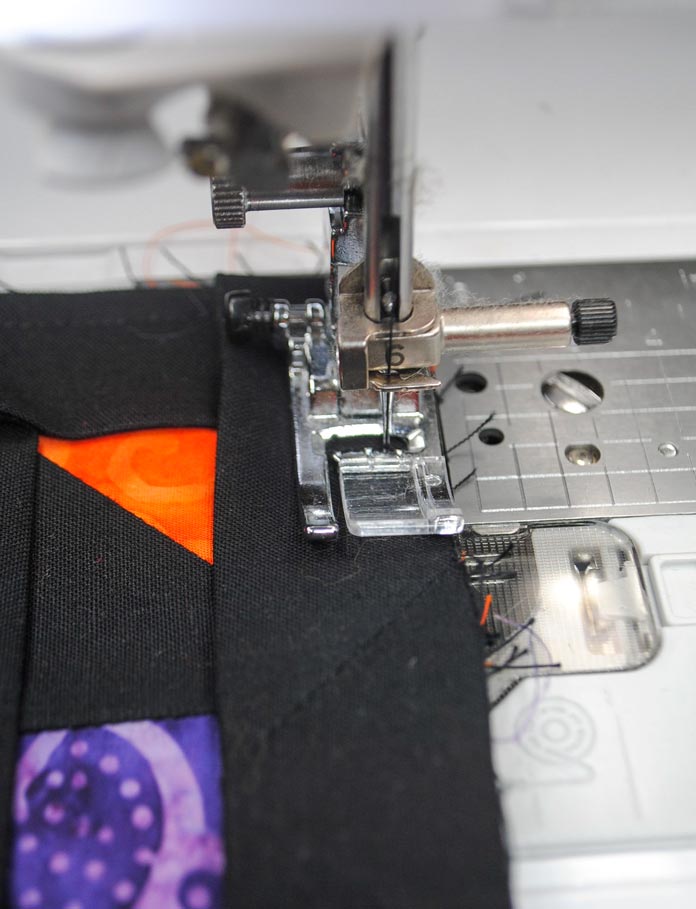 As you can see, I used the Dreamweaver XE to sew the edging onto all four edges of the HST row. 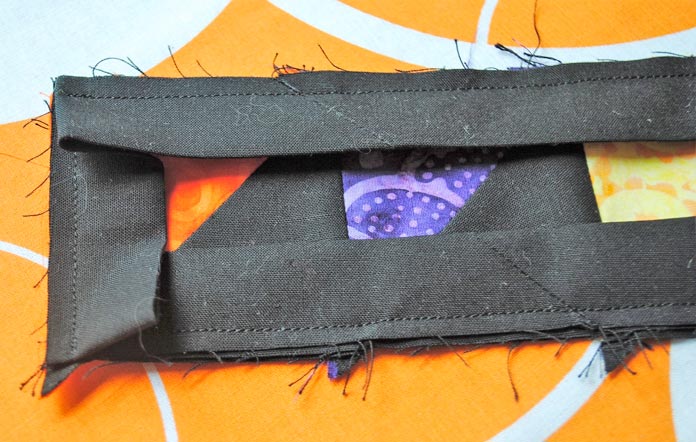 Now, the edging is folded to the back of the HST row and secured using Wonder Clips or pins. 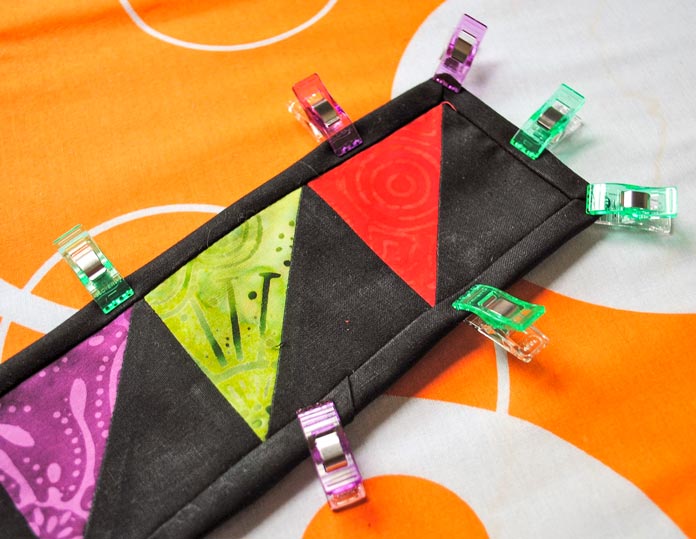 Fold to the back

I used an iron to press the edging and now the HST row is pinned in place on the tea towel. 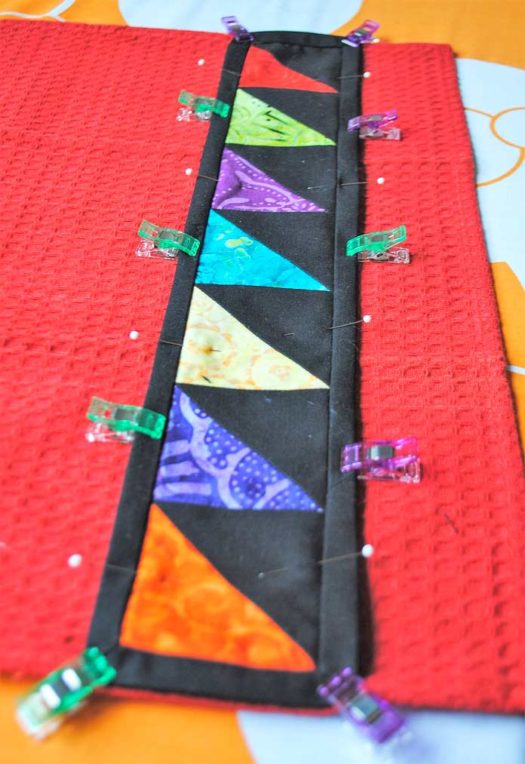 Now I’ll sew the HST row in place using a topstitch along the edging using the “J” presser foot on the Dreamweaver XE. 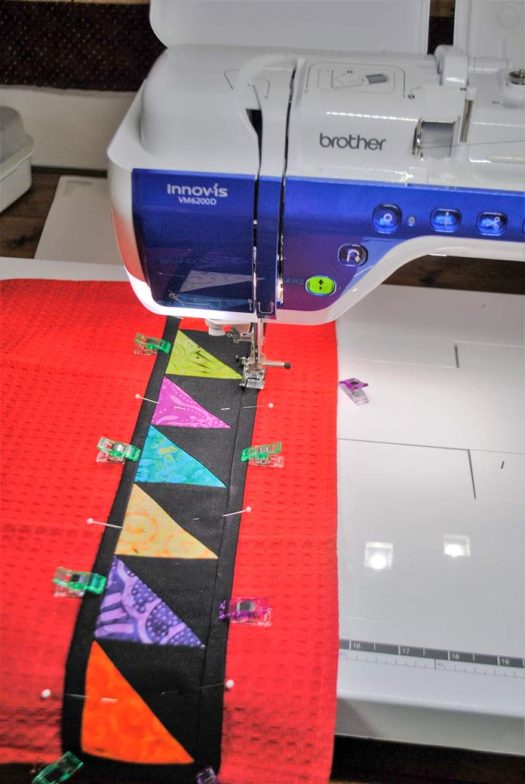 Here’s my finished tea towel! You can easily customize this gift by using fabrics that match your recipient’s kitchen or that match other parts of the gift such as kitchen utensils or placemats! 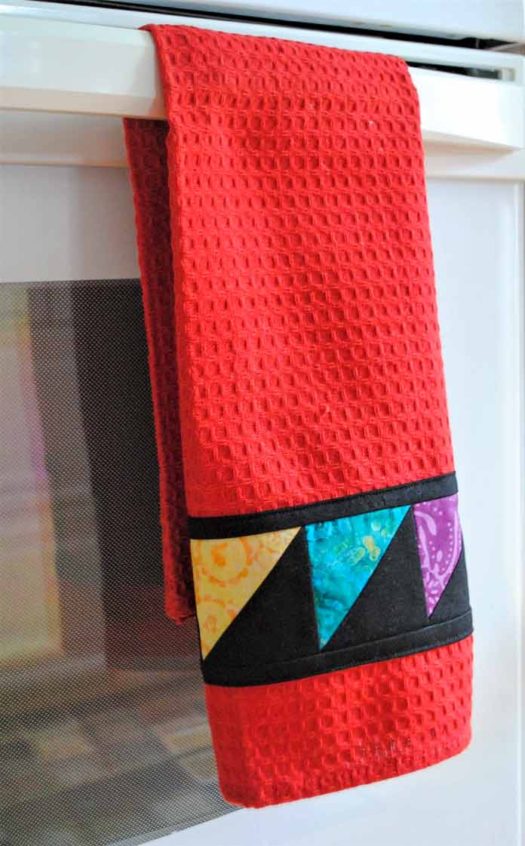 Well there’s one gift that is quick and easy to make AND we used up some leftovers too! I love projects that come together so easily!

Tomorrow I’ll use the Dreamweaver XE and a few more of these batik HST units to make a matching potholder. See you then!

This is part 2 of 5 in this series.
Go back to part 1: 4 creative quilt blocks using HSTs

Go to part 3: The Dreamweaver XE + HSTs = a fun and functional gift

The Dreamweaver XE + HSTs = a fun and functional gift

The anatomy of a Double Wedding Ring...