5 ways to use rail fence blocks

Yesterday on QUILTsocial I shared 5 tips for sewing with jelly rolls and we sewed a strip set as the first step in making Valentine’s Day table runner with WonderFil’s Eleganza thread. Today we’re going to sub-cut that strip set to make a rail fence block and we’ll sew our blocks together with borders to make the table runner top. Since rail fence blocks are so simple and versatile, I’d also like to show you 5 ways to use rail fence blocks in your next quilt. 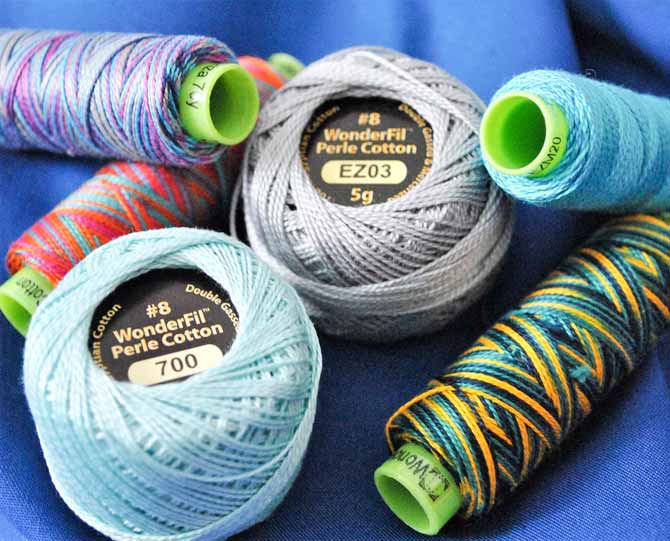 Let me tell you a little more about WonderFil’s Eleganza thread and why it’s SO lovely to hand stitch with!!

Not only is it mercerized but it’s also double-gassed, a process that involves burning off the lint from the thread two times, resulting in a much softer and cleaner finish than its counterparts. The resulting thread has a wonderfully smooth and lustrous surface that allows the thread to glide beautifully through all types of fabrics and fibers.

When I used the threads last month on QUILTsocial to make my snap bags I found that they worked just as nice on the wool as on the cotton fabrics and didn’t fray at all!! The thread’s tight twist creates beautifully firm stitches while its surface sheen produces a luxurious finish to embellishment stitchery. I love how there’s such an assortment of colors ranging from saturated solids to subtle tone-on-tone and random dyed contrasting variegates!

Let’s finish piecing our runner, so we can get to the beautiful hand embroidery with Eleganza threads.

Have you ever heard that saying? It applies to woodworking AND quilting and unfortunately, I didn’t do so when I was sub-cutting my 10½” blocks from my strip set! Two of my blocks were the right size, but the third block was 10½” x 10”. So… I had to get creative. I sewed the end of the strip set back onto that block and then re-cut it to the correct size. Hopefully when my applique shapes have been sewn on, and the table runner has been quilted it will hardly be noticeable. 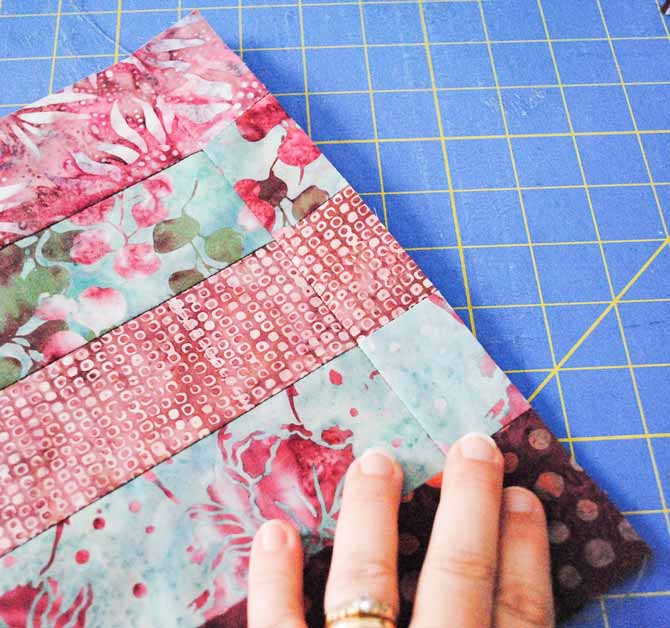 Measure twice, cut once (or you’ll have to get creative)

The rail fence block is a super simple block that even a beginner quilter can master (especially when using pre-cut strips) and it can be arranged in multiple ways to make quilts that look much more complex than they really are. Here are a few different arrangements that I came up with in EQ7.

The first example shows a simple two-color block. The split rail fence arrangement is shown where the first block is aligned with the strips vertical and the next block has the stripes horizontal. The blocks are alternated to create the zig-zag effect as shown. 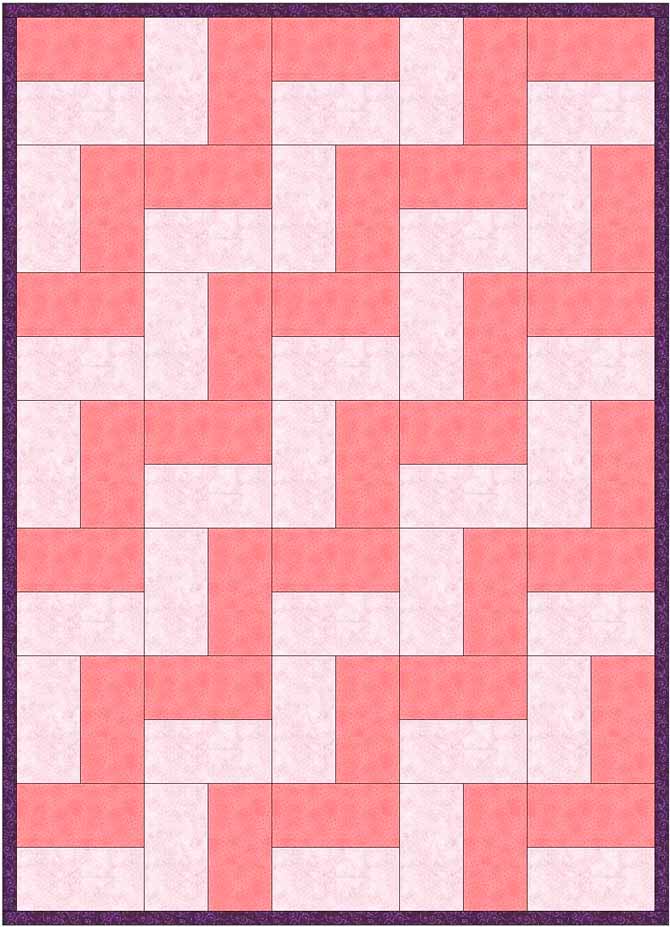 The most simple split rail design – using 2 strips per block 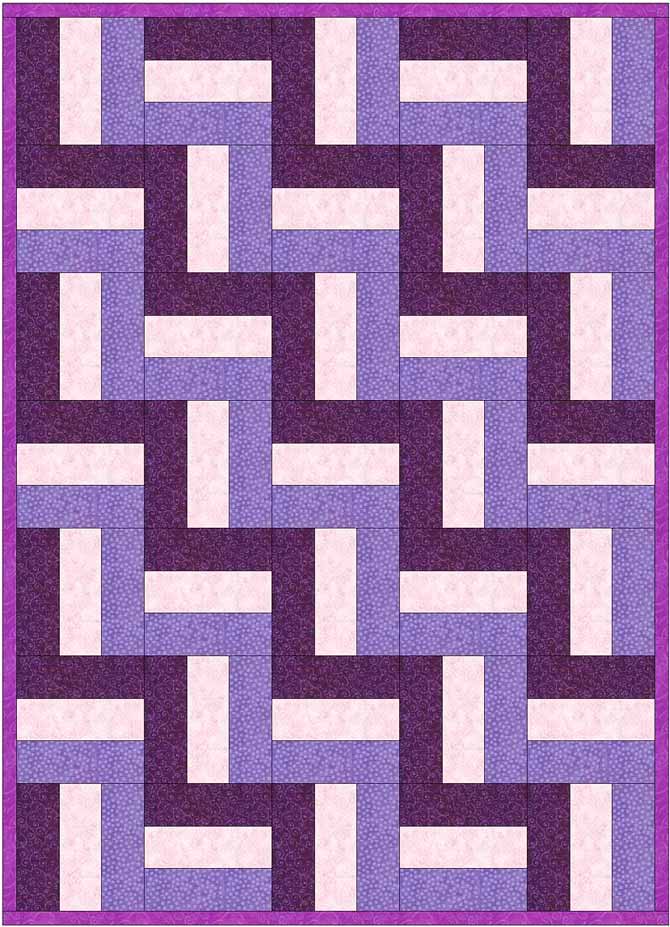 By adding more strips to the block, the finished quilt looks more complex. With this sample, each block has five strips and the blocks are rotated four different ways to make a secondary design appear. 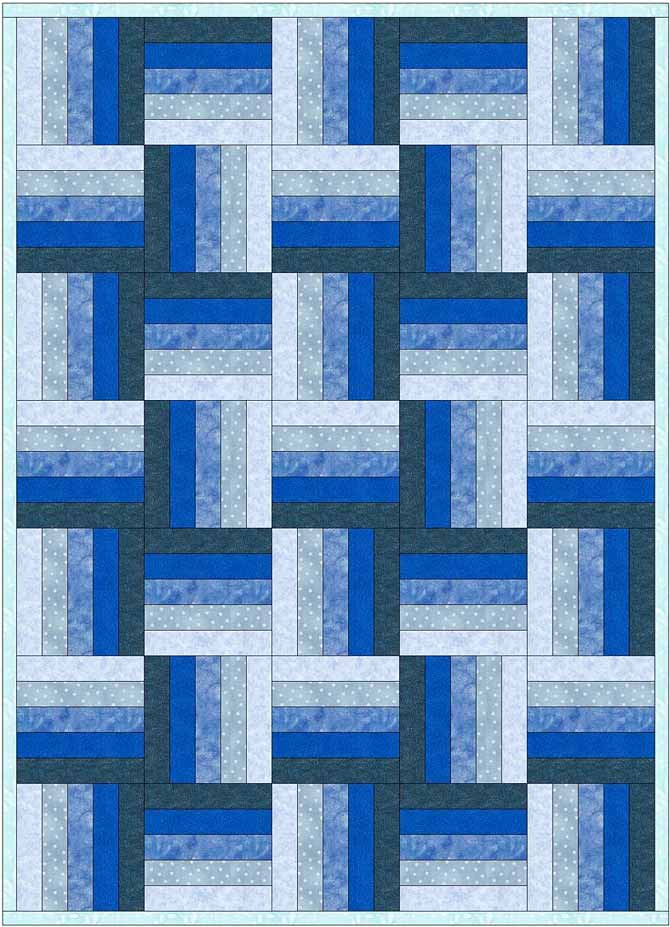 Setting the blocks on point gives a totally different look. 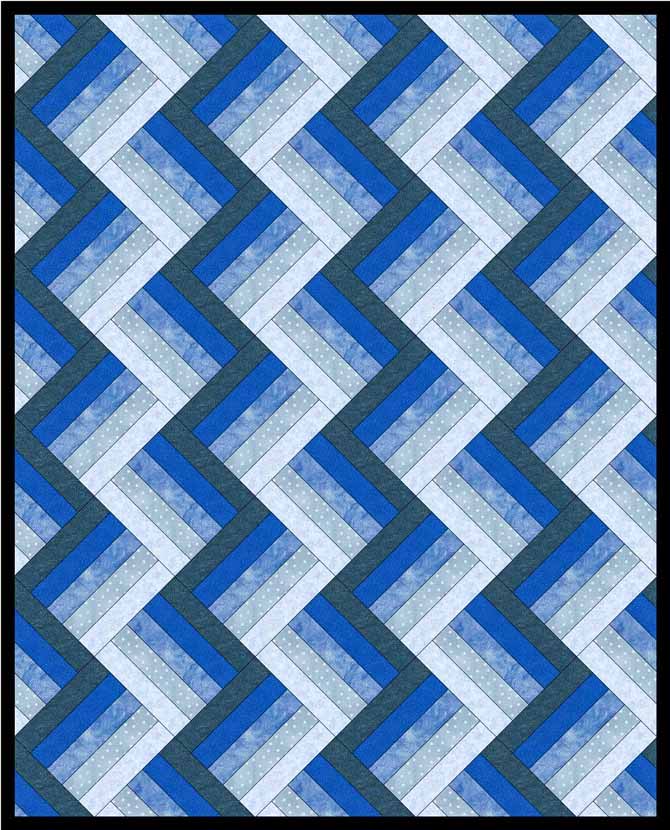 The same five strip block but set on point

Varying the widths of the strips can also make the finished quilt look much different. The following block has a wider strip in the middle and two narrower strips that are the same color on both sides. The resulting quilt when set in the traditional split rail setting appears as though it’s a basket weave. The outer border is the same color as the two narrower strips and adds to the illusion. 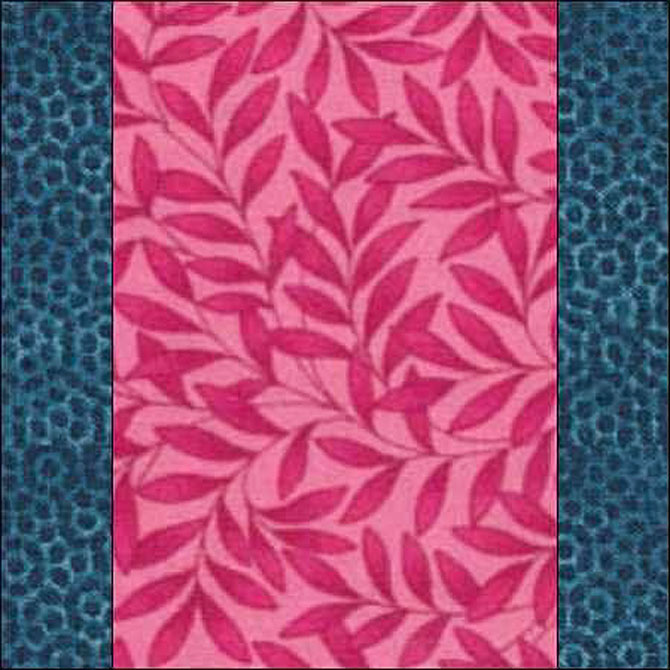 A two color, three strip rail fence block with a wider strip in the middle position 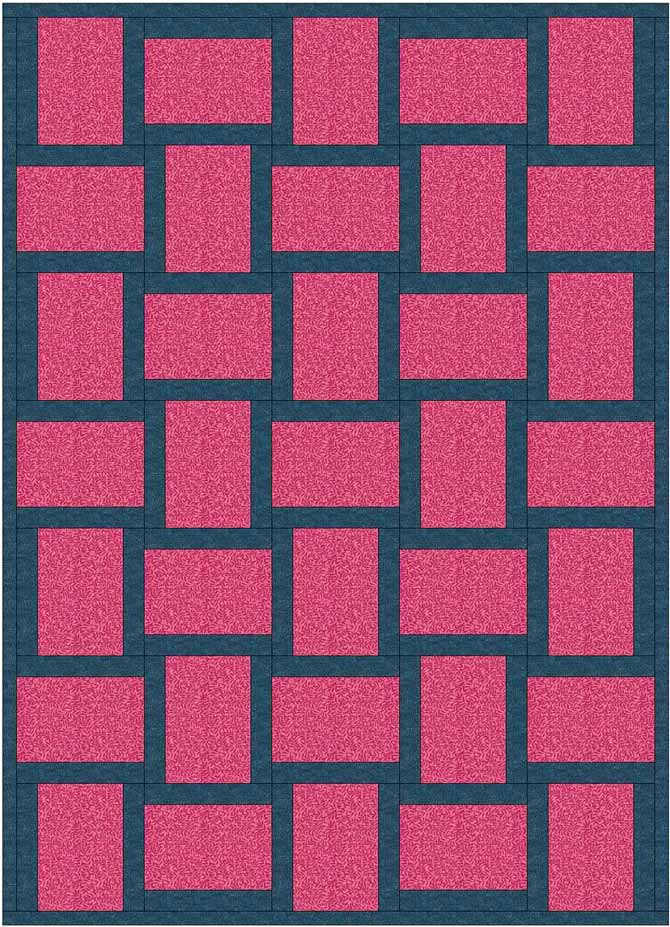 The above block, set in the traditional split rail arrangement, resulting in a basket weave effect

Now that my three blocks have been cut from the strip set, I tried out a few different ways to arrange them. Unfortunately with only three blocks, the split rail fence arrangement didn’t look right. 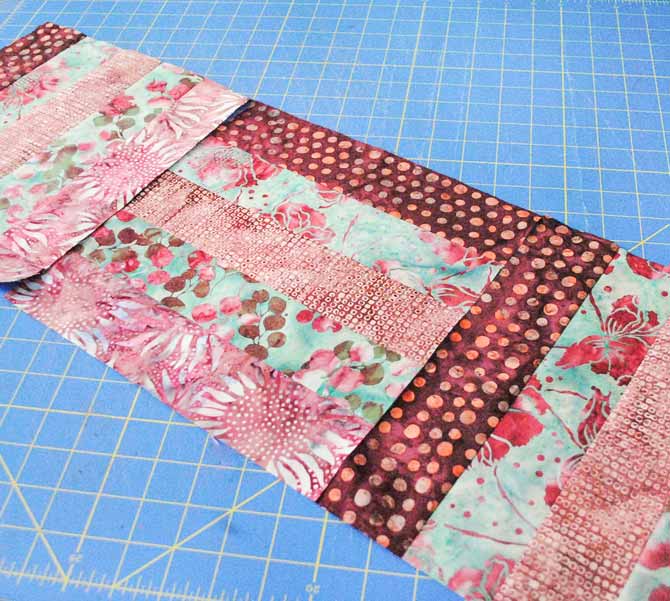 Arranging the blocks in a traditional rail fence setting

So, instead of rotating the blocks, I set them all so that the seams were running in the same direction. I sewed the blocks together and then started adding the borders. 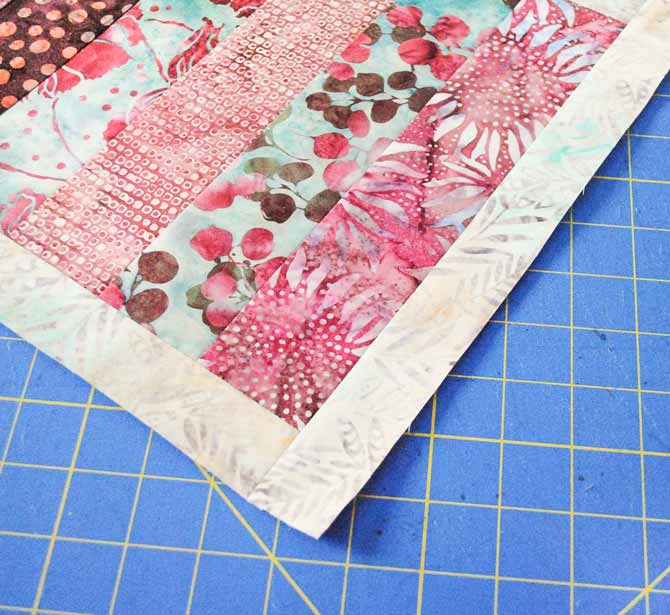 The inner border strips are sewn first to the long edges of the table runner, then to the short edges

I sewed the 2½” blocks together to make the outer borders. The longer side borders needed 16 squares each. After sewing these to the sides, they were pressed towards the borders. The two shorter sides needed 8 squares. These were sewn together and then sewn to the ends of the table runner and pressed. 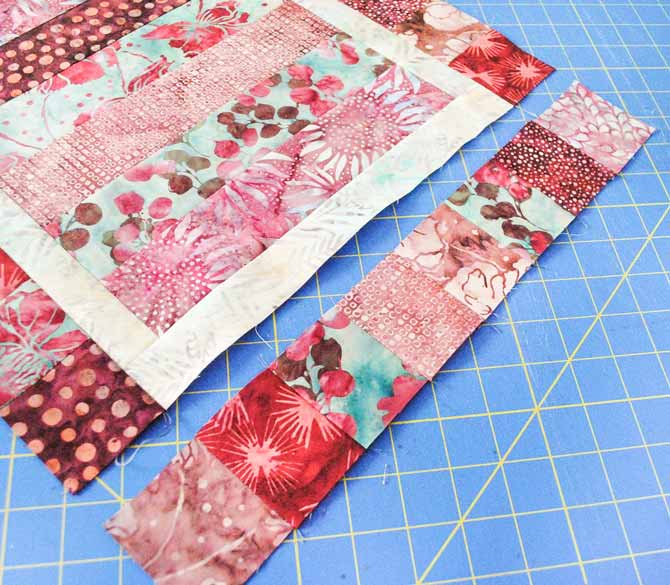 For the piecing of the table runner, I used WonderFil’s Konfetti thread which (like the Eleganza) is double-gassed and mercerized. It also is free of any type of wax or coating that can cause build up in machines. It is a super low lint thread which also has a low bulk resulting in more accurate piecing!

Now that the table runner top is complete, I can’t wait to add some embellishments using the Eleganza threads! They’re so lovely to hand stitch with! 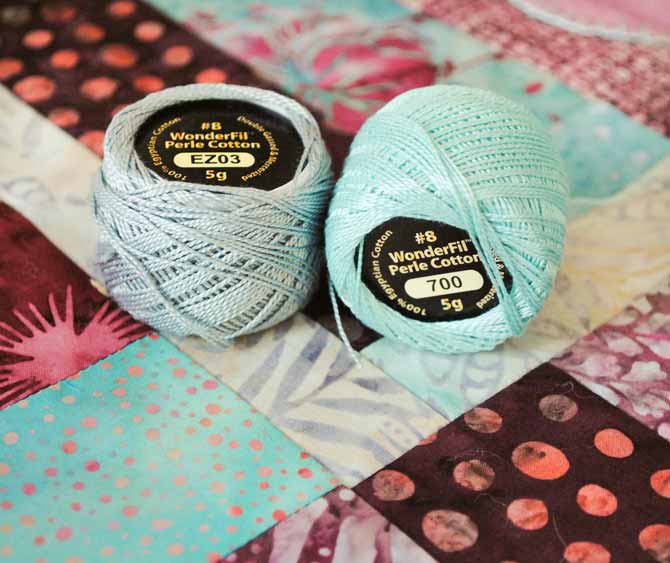 Tomorrow I’m going to show you a couple more uses for the jelly roll strips and then on Thursday, we’ll do some wool applique and embroidery on top of the table runner. Hopefully today you’ve enjoyed learning about 5 ways to use rail fence blocks and can see how simple yet versatile they can be.

This is part 2 of 5 in this series.
Go back to part 1:  5 tips for sewing with jelly rolls

Go to part 3: 3 ways to use strip piecing in a quilt

5 tips for sewing with jelly rolls

3 ways to use strip piecing in a quilt

Use Silco thread to add more punch to...

When your quilting calls for threads to be...

Why WonderFil Tutti thread is so good for...

Why using Invisafil thread is best for adding...

Can you tell me the size to cut the rectangle and the side strips for the quilt block pictured above?

I want to make 5 memory quilts, out of a man’s shirts, using this pattern.

i have never been a fan of the rail fence block but after seeing this post i can’t wait to make one.

Thank you for this! The timing is perfect! I have some two fabric rail fence blocks that I was trying to lay out and I couldn’t find a design I liked. Love your version, so I will be using it!

I love the rail fence on point setting. Thanks for all the good pointers.

Spotlite: 6 tips for quilting with metallic...

2 ways to use punchneedle embroidery to...