Hey everyone! Glad to have you back! Yesterday I made a canvas tote bag with some delightful autumn leaf embroidery using the embroidery edit features of the Brother Luminaire XP. Today I’ll be using another cool feature—Auto Applique—to make patches (crests, or badges—whatever you want to call them) designed almost completely on the Brother Luminaire! Aren’t patches just great? You can use them to make a statement on all kinds of things! Personally, I love the idea of a decked-out jean jacket or backpack! 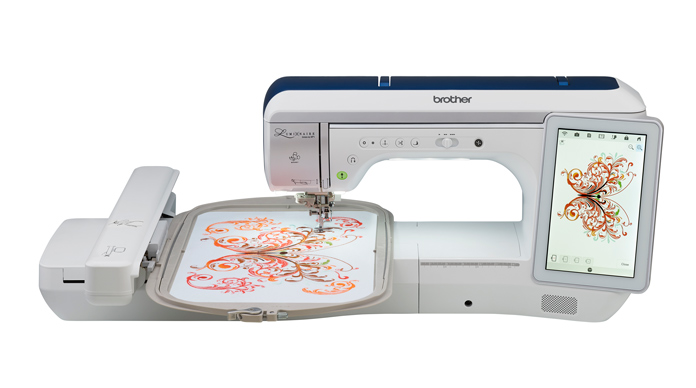 Before I reveal my choice of design for this one, I’ve just gotta tell you the back-story.

I’m a student at Trent University, and on campus, there lives a squirrel by the name of Trousers. Ok, yeah, I named him. But Trousers isn’t just any run-of-the-mill eastern gray squirrel, not by any means! He’s an incredibly special squirrel. You see, Trousers has unique markings, making him extremely easy to spot on campus. Trousers is mocha brown from the waist up…and khaki from the waist down. This awesome coloring gives Trousers the unmistakable appearance of wearing pants. From there, an Instagram account was made to honor the soon-to-be-legendary campus squirrel, to keep adding to his fame!

With that in mind, I’ll make a ‘Trousers the Squirrel Fan Club’ patch to proudly wear around campus!

With some help from my mom, a seasoned digitizing expert, I was able to alter the built-in chipmunk design so that the colors better matched our little squirrely friend. Aside from this customization, everything else was done totally on the Luminaire! 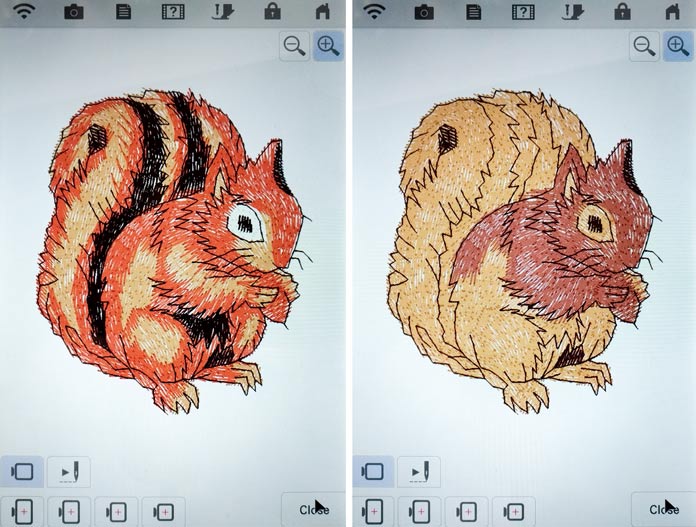 From chipmunk to squirrel!

So, I brought this altered design into my Luminaire, and got to designing the rest of my patch. With all its built-in features, the Luminaire makes it so easy to put together your own fun patches and badges.

I wanted to make mine a circular patch with Trousers in the center, and the text wrapping around it. To do this I added text—the teeny tiny small font text— from the Luminaire’s font menu.

Adding text to my badge

Did you notice that I zoomed in, too? You can see in the upper left of the screen, in that last pic, that the magnification is at 400%! Sure makes it easy to see my design up close!

I then played with the text so it would curve around Trousers. The Array feature arcs your words for you, and you can even alter how tight the curve is! I also played with spacing, bringing the letters closer together until it was just perfect.

Then I added a circle from the machine’s built-in frame shapes (Menu 4) and sized it down a bit, to use as a template shape for the applique tool. 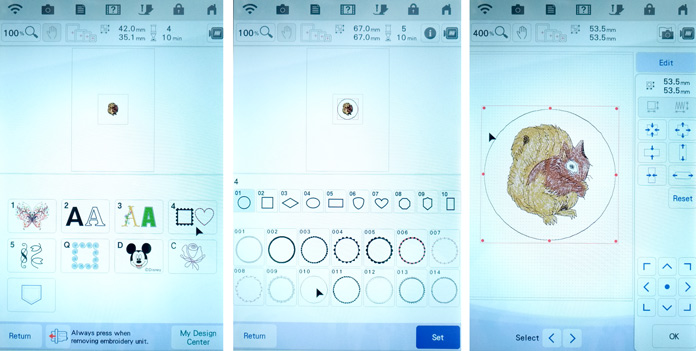 Adding in a template circle shape

With that circle selected, I used the Applique button on the Edit menu. The Applique button is the one that looks like a crest with a crown in the center. It did all the work for me by setting the applique steps and stitches just a little bit bigger than my original circle.

Then for a little bit of cleanup, I deleted the template circle (had to ungroup it from the applique), and of course I recolored the final circle. I also used the sequence tool to move the last-added applique to the beginning.

Bringing the applique to the sew first

Now…a life hack for you: if you have a Brother ScanNCut, you can save this file to a USB stick, plug it into the ScanNCut and it perfectly cuts out your fabric to the exact size you need to sew on! 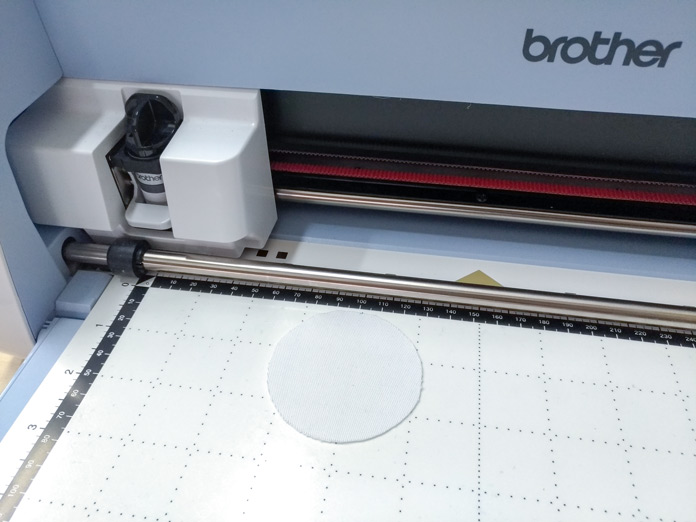 Time to Stitch! When stitching out my design, I manipulated the sewing order in the Stitch Navigation Window. I skipped stitching the first color (‘cause we cut that one on the ScanNCut), and started by sewing the placement circle around the patch onto heavy washaway so I know exactly where to position the patch fabric. 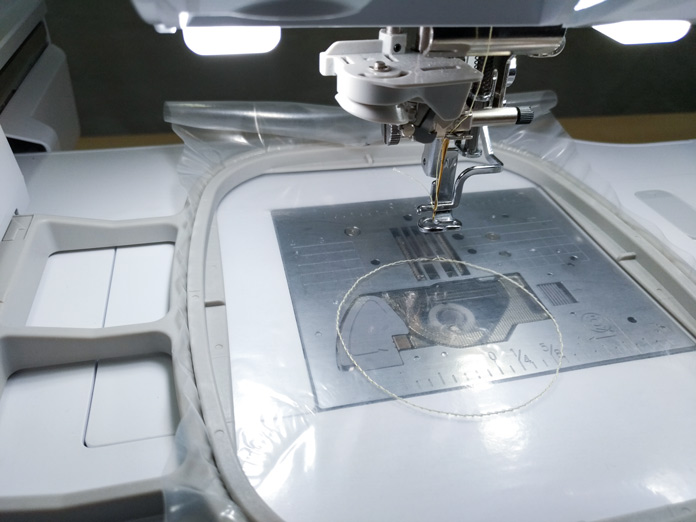 Then I carefully lined up my cutout in the stitched circle… 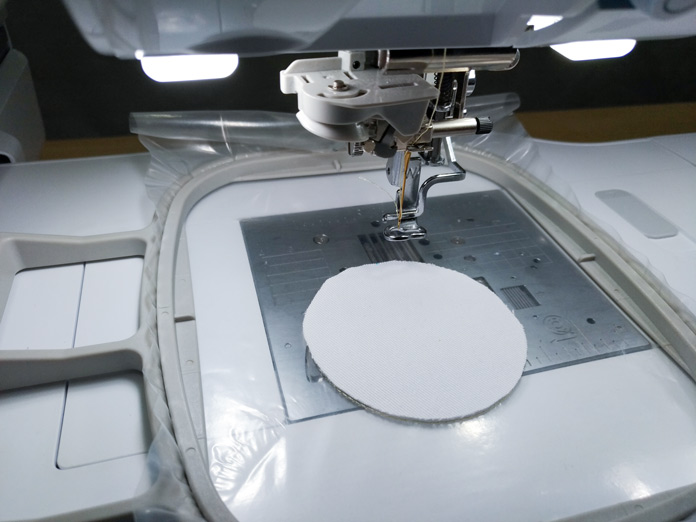 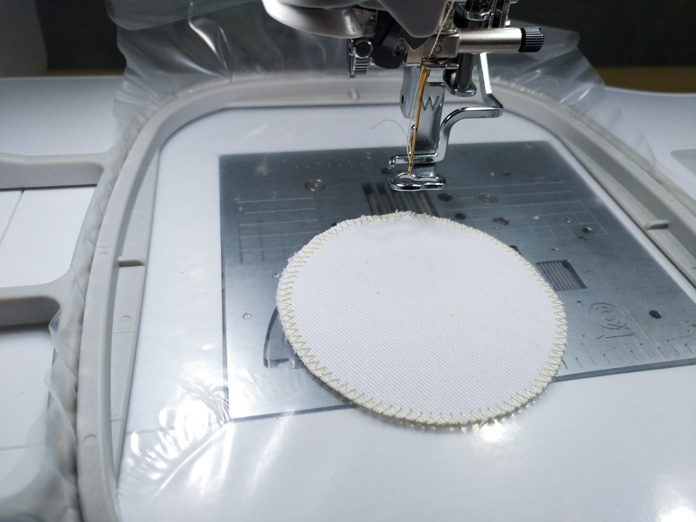 Sewing my patch into place

As you can see in the above pic, I stopped the machine just before it started the satin stitch around the edge, though. I didn’t want to risk such a tight stitch perforating the whole thing out of the stabilizer, so I’ll come back to that part and sew it last.

After my material was secure, I embroidered the rest of the patch. Then I backed up and stitched that final circle. Just before hitting Go again, I topped my mostly-embroidered patch with lightweight water-soluble for a cleaner end result. What do you think? 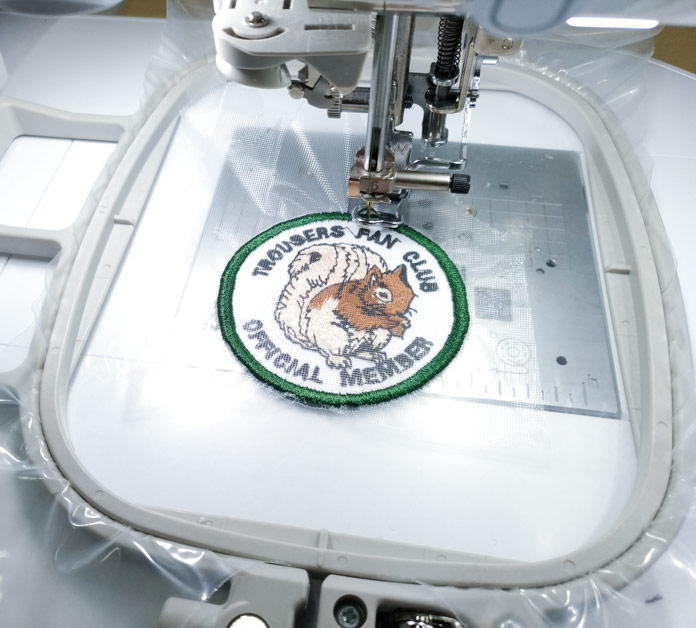 And here it is all done. 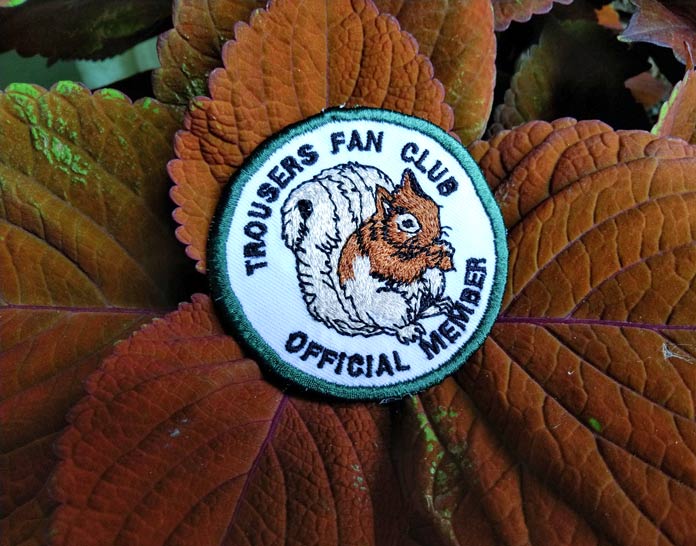 Patches like these are great for awarding children camping merit badges, to commemorate family gatherings and reunions, promoting school clubs, and whatever else you can come up with!

Stick around for tomorrow’s post, where I’ll take on an even more exciting project on the Brother Luminaire XP! I’m really excited about this one. I had an idea that just wouldn’t go away, and I’ve been anxiously checking my mailbox every day hoping that the special ‘something’ I ordered to embroider on arrives in time. Don’t even try to guess, just come back tomorrow so I can show you!

Go back to part 2: Combining embroidery designs on a canvas tote using the Luminaire XP: easy

Getting to know the Luminaire: a beginner’s...

Get into ‘cottagecore’ with hoop-framed faux embroidery...