Home » Brother » Brother Luminaire XP » Getting to know the Luminaire: a beginner’s approach to machine embroidery!

Getting to know the Luminaire: a beginner’s approach to machine embroidery!

While I’ve dabbled in hand embroidery, I never really did much machine embroidery despite being surrounded by top-line machines growing up – and what could be more ‘creme de la creme’ than the Brother Luminaire XP ? Over the next few days, I’ll be getting to know the Brother Luminaire XP and sharing my journey. I’m sitting in front of the XP with both premium upgrades installed (SAVRXPUGK1 and SAVRXPUGK2), virtually making it a Luminaire XP2 with all the bells and whistles. And how many newbies get to play on such a luxury toy as this one? 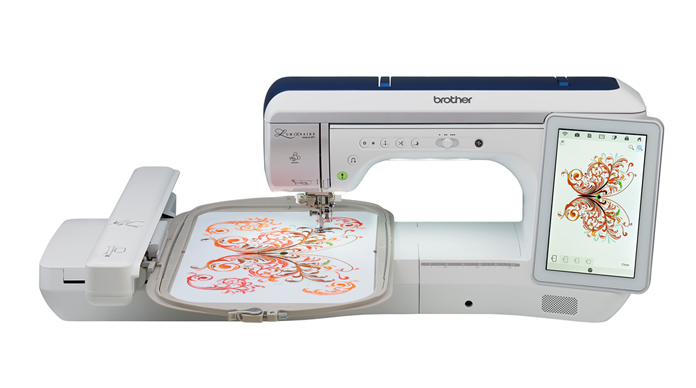 As a conservation biology major, I’m a lover of outdoor adventures. Comfy field gear is a must, so why not make sure it’s stylish, too? It makes perfect sense, then, doesn’t it, that I chose to customize a plain, store-bought hoodie for my first project on the Luminaire! To kick off a naturalist theme, I found a free download of a pretty little maple leaf from Brother to embroider as a chest crest. I like this one especially because of its hand-stitched look. Click on the leaf below and search ‘maple leaf’ if you want to download one for yourself. 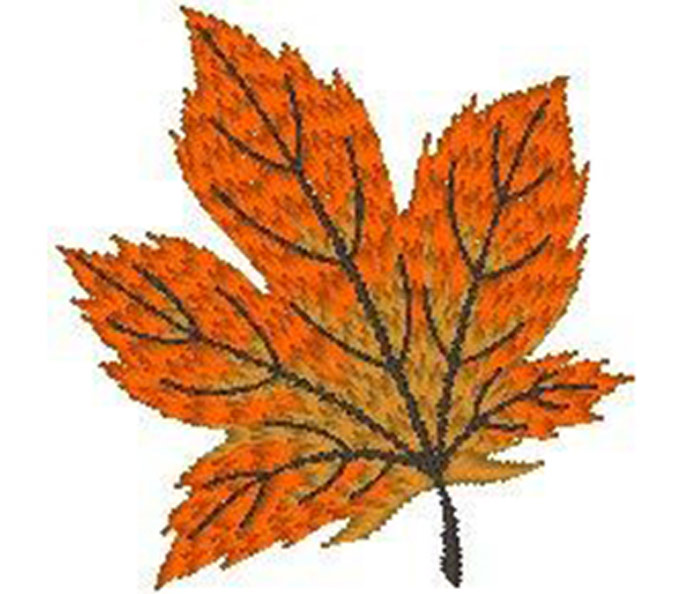 So, now that I have my design picked out and downloaded to a USB stick, it’s time for Mission Zero: familiarizing myself with the Luminaire. As a newbie, it took a little bit of playing around, but once I got used to it, I found the machine incredibly easy to use. The buttons on the screen clearly illustrate what function they serve (which makes it easy even for beginners like me to succeed!).

Here is the step sequence to retrieve the design from a USB stick after plugging it in: select Embroidery, then Pocket, then the USB icon, then a leaf design, and then Set, as shown in the following screenshots. 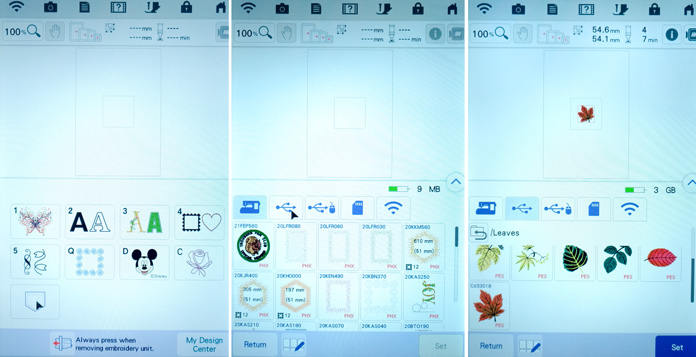 To retrieve a design from a USB stick, after plugging it in, click the pocket, then the USB tab, and then the design before hitting Set.

After setting the design, I decided to explore the Edit menu. I really wanted to deviate from the original colors that the leaf design called for, and I found the Luminaire’s palette feature extremely helpful for previewing the colors I wanted to select for my leaf prior to stitching out the design! Here’s what I did: I selected Edit, then the Color Palette Menu, and then I played with the color options. 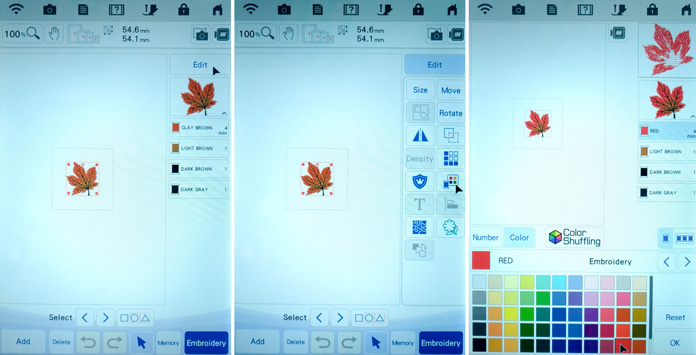 Steps for picking your own color scheme

I tried out a few combinations and being a huge fan of the colder seasons, rich autumn-red and gold really won my heart, but hey! – I won’t stop you if you wanna play around and make a lively green leaf, or maybe even a fantastical purple one! My point is, if you have an idea in mind and want to test run it without using materials, that color palette feature is your new best friend.

Here’s where it gets even cooler: if you want to see a sample of your design stitched out on your material, the scan function allows you to scan and display your material and design on screen so you can get an even better idea of what the completed project will look like.

To access the scan function while on the editing page, simply touch the Scan button (which is the fabric and camera icon), then touch Scan and then OK. Once scanned, the screen displays your fabric with an image of the selected design. 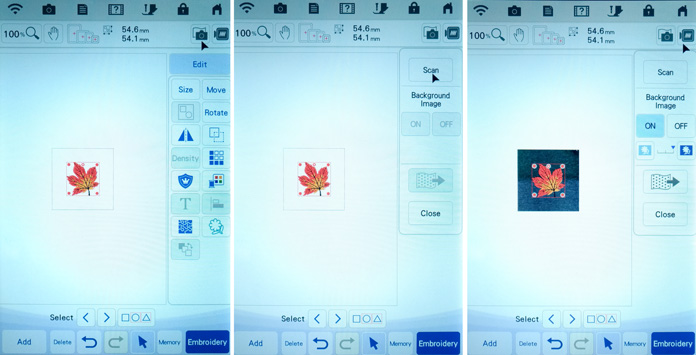 Scanning your design for realistic previewing

If you want to see a bigger view of it, just touch the Preview button (the embroidery frame at the top right), and you can see it displayed in a hoop, or even a close-up rendering, like this: 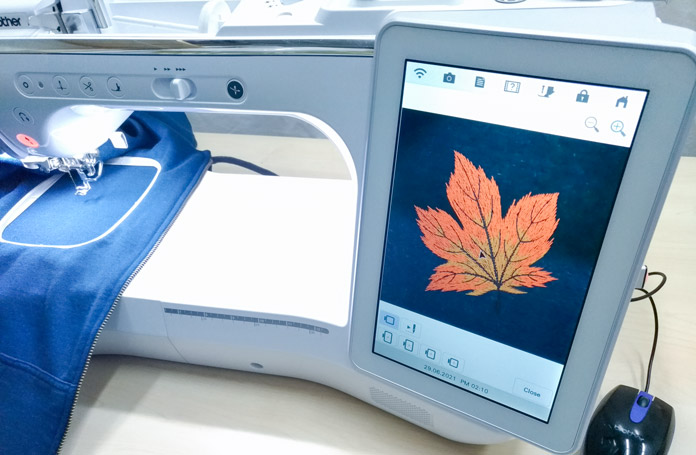 The scan function displays your design on your fabric on screen!

Impressed? Didja also happen to notice the mouse in the corner? If you would prefer a mouse to the Luminaire’s touch screen, you can easily hook up a wired mouse to use instead!

Here’s another bonus: would you like to go a step further and see your design right on your fabric, not just on screen? Well, you can! The Luminaire can aim a nifty projection onto your material! Using this feature, you can see exactly how much space your design will take up, and where it is. You can see how your design colors look on your material! It’s almost like a hologram—the future is now! 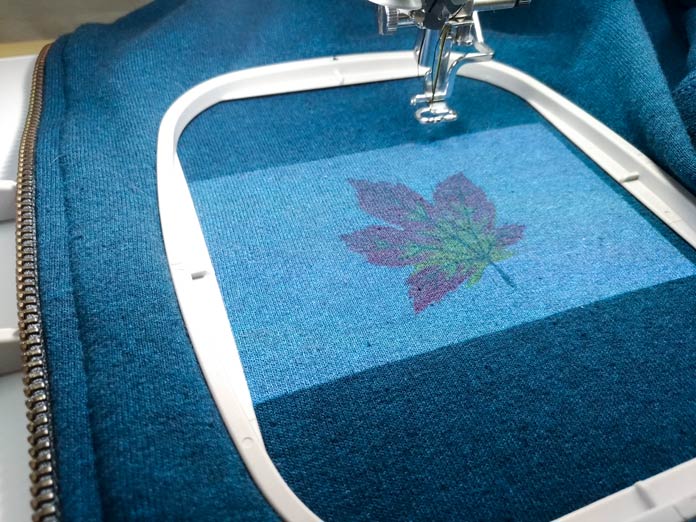 The projector function beams your design right onto your fabric!

How did I do it? Easy-peasy: advance to the embroidery screen and touch the Projection button (the one that looks like a party hat) and let the Luminaire do its thing! 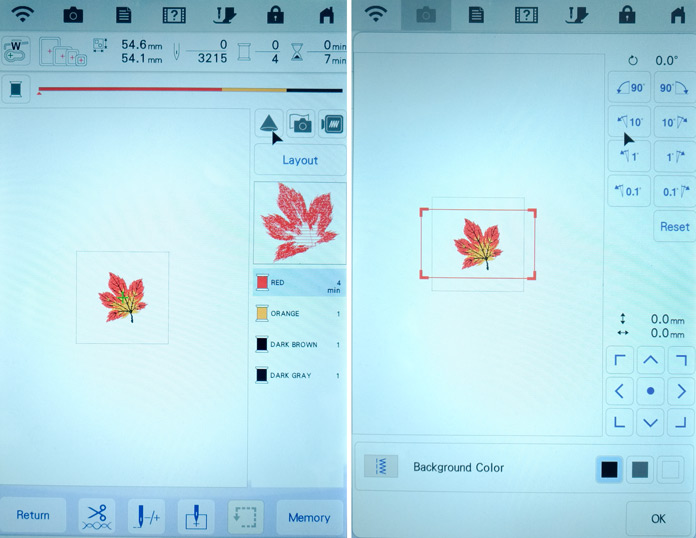 Once I got my colors sorted out and was done playing with the cool toys, I was pretty much ready to stitch. But I want to back up a bit in my story and tell you about hooping my hoodie. Since the fabric was a stretchy knit, I was advised that a cutaway stabilizer was a must, and to add extra stability for the hand-look stitches I backed that with a layer of tearaway. All that went into the hoop, but it wasn’t all I used. One last layer. On top I placed a water-soluble topping to help the stitches sit on the surface of the fabric rather than sinking in. I wasn’t sure how to keep that in place while it embroidered, and then I discovered that the Luminaire even has a basting function to hold the water-soluble layer in place and keep my fingers out of the embroidery area. How do you add a basting stitch, you may be wondering? On the embroidery screen, touch Layout, then select Basting Stitch (it’s the flower button with border). 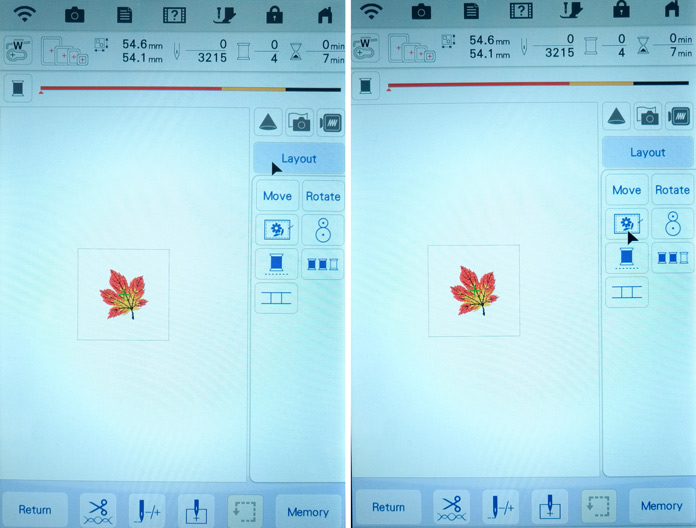 The basting function is on the Layout menu

The basting stitch is kinda cool, really, because even though I added it last almost as an afterthought, it stitched first! Which makes sense, right? I mean, what’s the point of basting after everything else is done? Here’s what it looks like with the basting stitch actually stitched out. It’s a good, long stitch which will be easy to take out later. 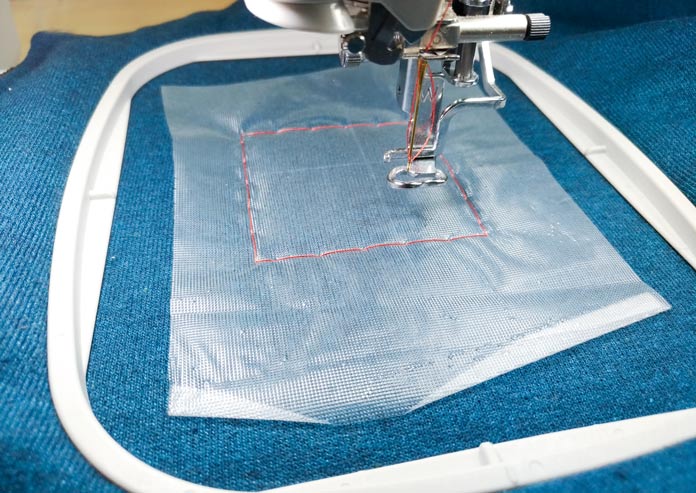 The handy built-in basting functions holds all my layers together

And then I finally got to stitchin’ the rest of it! Honestly, getting the hoodie into the embroidery hoop and doing all the prep work was the most time-consuming part of this project! So much fabric to maneuver!

After hitting the start button, the rest was just coasting. Switching threads was super easy. The Luminaire lets you know when you need to change to the next color, which makes stitching out your designs a breeze! It sewed beautifully – and it was so quiet! It was so cool watching my project come to life! 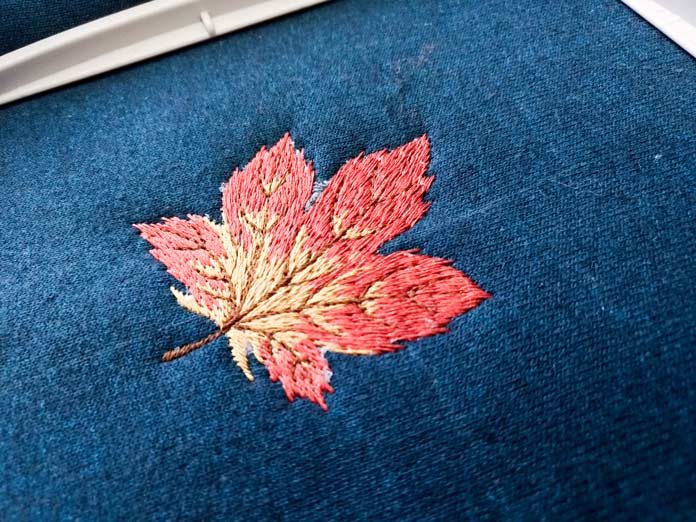 My completed design—I still need to dab away the water soluble!

I absolutely love how my little leaf turned out! So much so that of course I needed to do a bigger design on the back of my hoodie to match my outdoors theme. I surfed the Internet again and found a gorgeous nature scene design by Embroidery Library. That one took a long time to stitch! The display said 103 minutes! It’s a good thing the Brother Luminaire can motor along at a top speed of 1050 stitches per minute. Of course, it took even longer because it also did all the thread trimming for me, and ahem…I dithered over my color choices on this one as I went, instead of deciding them all before-hand. 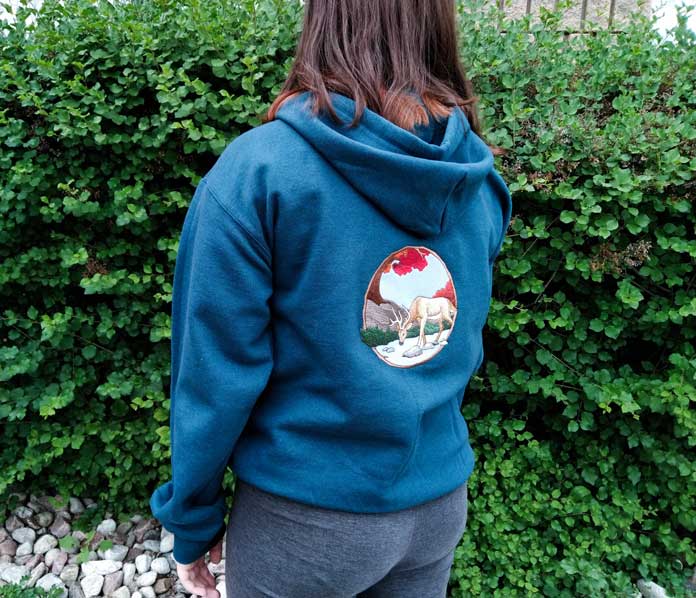 My completed first project on the Luminaire

It’s done now and I love it! After all, nothing beats a good old camping hoodie to protect you from those chilly up-north nights (and those pesky mosquitoes). Well, maybe having a personalized hoodie that no one else has!

Join me tomorrow as I work on my next nature-themed project on the Brother Luminaire XP! Betcha can’t guess what it is…

This is part 1 of 5 in this series

Get into ‘cottagecore’ with hoop-framed faux embroidery...

Fire up your camping chair with customized...