It’s a WRAP! Using applique and piping to make a cushion wrap band

I can’t believe it’s the end of the week already! It’s the last day I can share what I’m working on with you, but it won’t be my last day playing with the Husqvarna Viking Tribute 150C and the Circular Attachment. Did you see the fantastic cushion cover I created using the circular attachment templates and stitching?

I mentioned earlier in the week that there is an additional set of templates with new shapes, and that’s what I’m looking at today. I’ll use the template set to dress up the red and black plaid cushion cover, and wait until you see what I made! I’m so impressed and excited!

I’m making a wrap band for the cushion cover and started by cutting two pieces of black linen, 17″ by 7″. I fused the interface to both parts, and trimmed them to 16½” by 6½”. You decide on the size depending on the size of your cushion covers.

Then I used the circular attachment and made three applique circles as I did earlier in the week. Be sure to use a marking tool that will disappear readily. I love my white Chaco Liner, as the lines were mostly gone by the end of the project. If you don’t have one – you need one! 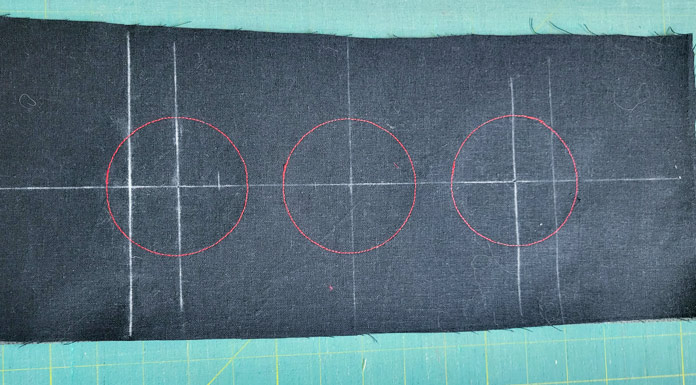 The reference lines for the three applique circles

And here are the finished applique circles. There are so easy to make, and do you see how perfect they are? I love the circular attachment and can think of many more designs I want to make. 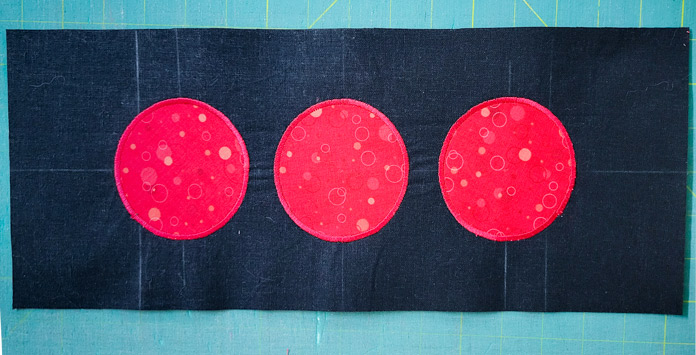 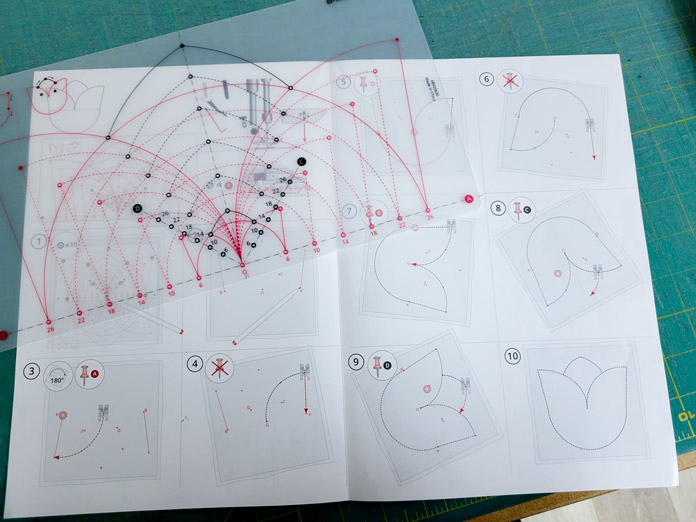 The tulip template and instructions

The first thing I did was get out a piece of scrap paper and practice. I marked the reference dots and then emulated the stitching, and I was good to go! I can’t emphasize it enough, but if you don’t know how to do something, try it on paper first, then go to your sewing machine! That sure beats ripping out stitches! 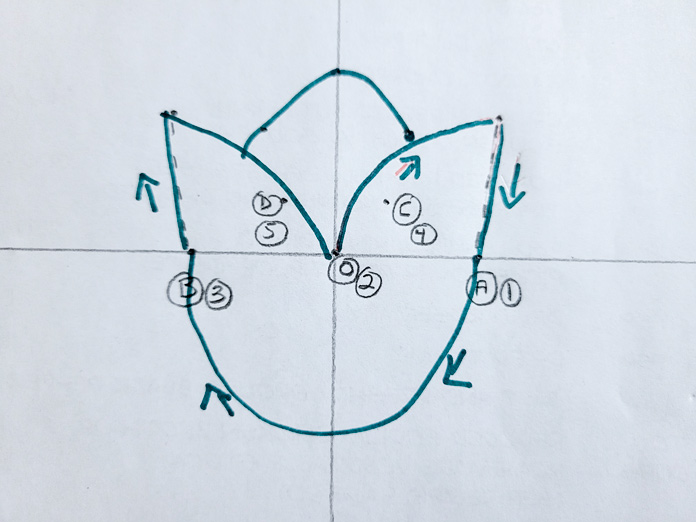 The road map for the tulip template

Then I marked my fabric. And here’s another reason, I love the Chaco Liner. I goofed on the lines, so I used my fingers to remove the chalk, and it was gone enough to continue! 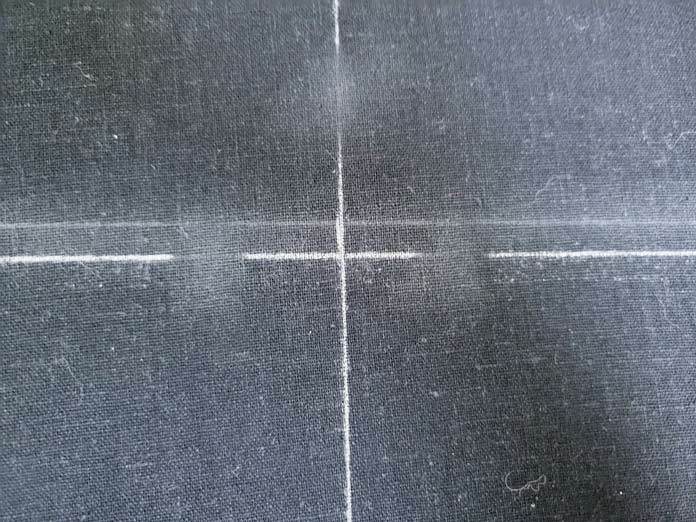 Then using the tulip template and a white chalk pencil, I marked the ten dots necessary to create the tulip. You can see nine of them here; the tenth is the center! 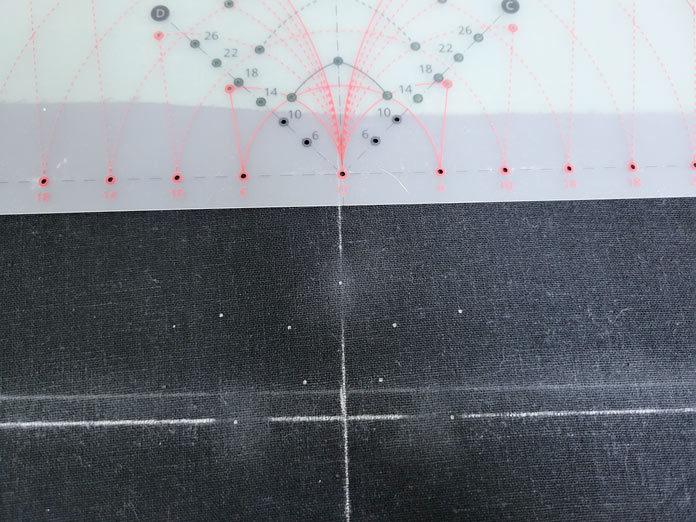 The reference points for the tulip

With my road map beside me (I could have used the instructions, but I need to understand, and I learn by doing!), I inserted the push pin, lined up my fabric, and started stitching.

I used the Satin Stitch Narrow (1:30) on the Tribute 150C and a 40-weight embroidery thread. It worked like a charm, even on all the pivots! Easy! 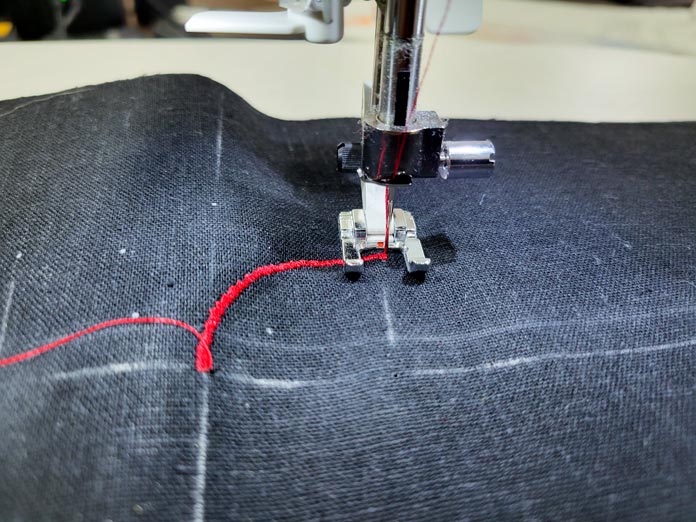 Using a satin stitch to stitch the tulip 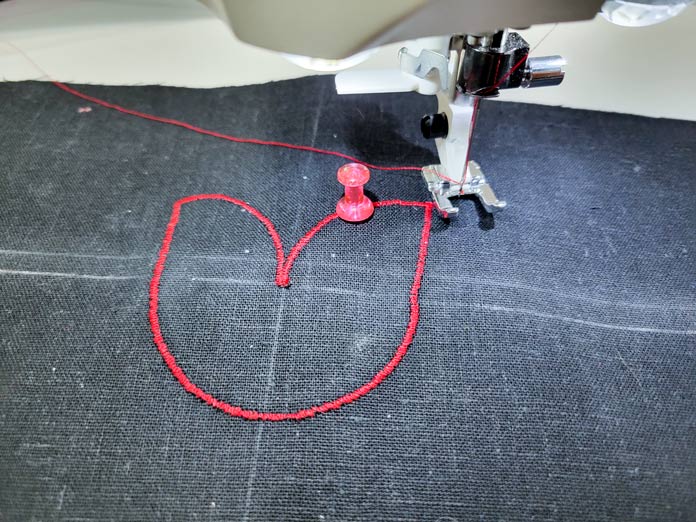 The outline of the tulip shape

Now that both sides of the wrap band are complete, it’s time to sew it together. I contemplated constructing it differently, but this method worked for me.

I wanted piping on the top and bottom edges, so I started with the piping. I put the Husqvarna Viking Piping Foot on the Tribute 150C. I cut narrow strips of fabric on the straight grain, as there was no need to use bias. I used a thin cord to create this piping, and in case you wonder what this is – it’s the cord used for roman shades, and it works like a charm. You’ll need two pieces of piping slightly longer than the wrap band – one for the top and one for the bottom.

I cut the strips at 1½”, which is wider than I needed, but I trimmed them down before sewing the piping to the wrap band. I used the Piping Hot Binding tool to trim the seam allowances. 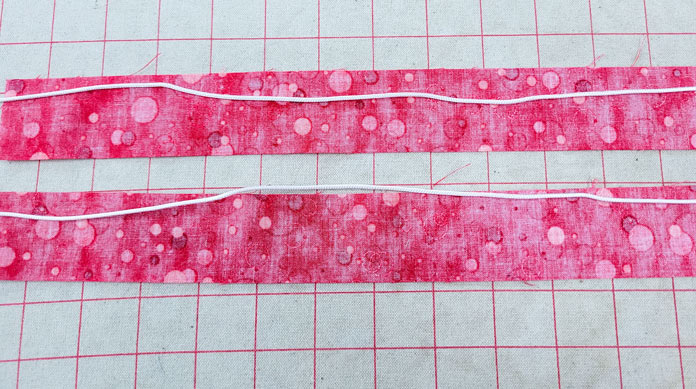 The strips of fabric and cord for the piping

I folded the fabric strip in half and snugged the cord as close to the fold as possible. When you start to sew, ensure the cord is seated into the groove on the underside of the Piping Foot. 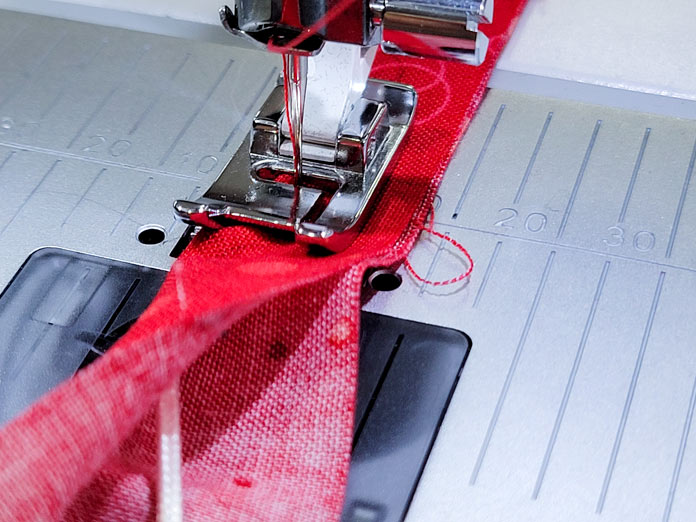 Sewing the cord into the piping fabric

You’ll be stitching the piping several times, but on the first pass, I use my finger to keep the cord close to the fold. 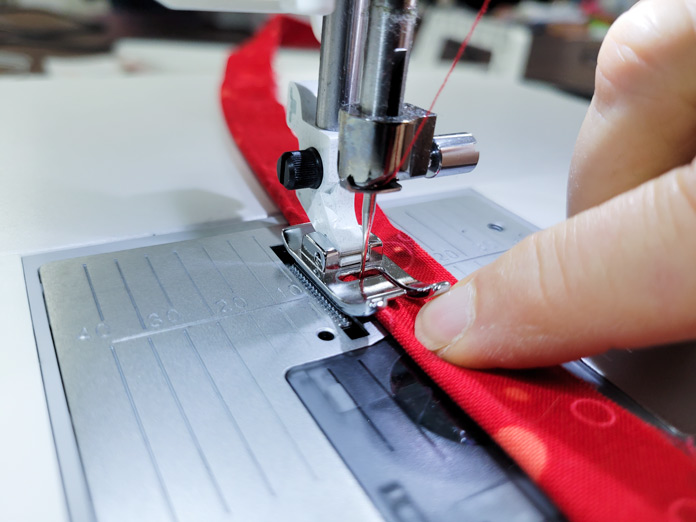 Use your finger to keep the cord close to the fold

I then sewed the front and back bands together to form a tube. It was now time to attach the piping to the top of the wrap band.

Again, I used the piping foot for this. I overlapped the beginning and end, which is super easy, and the join barely shows because the piping is small. 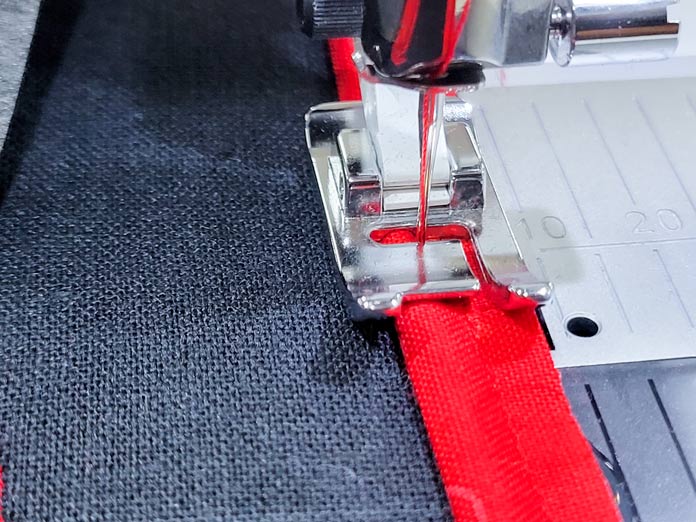 Sewing the piping to the wrap band

Once the two bands of piping are attached to the tube consisting of the front and the back, it’s time to add the backing. If we could sew the front to the back and turn it inside out, that would be easy, but since it’s a tube, that won’t work! If you look to the side, you can see one of the joins and how neat it looks. 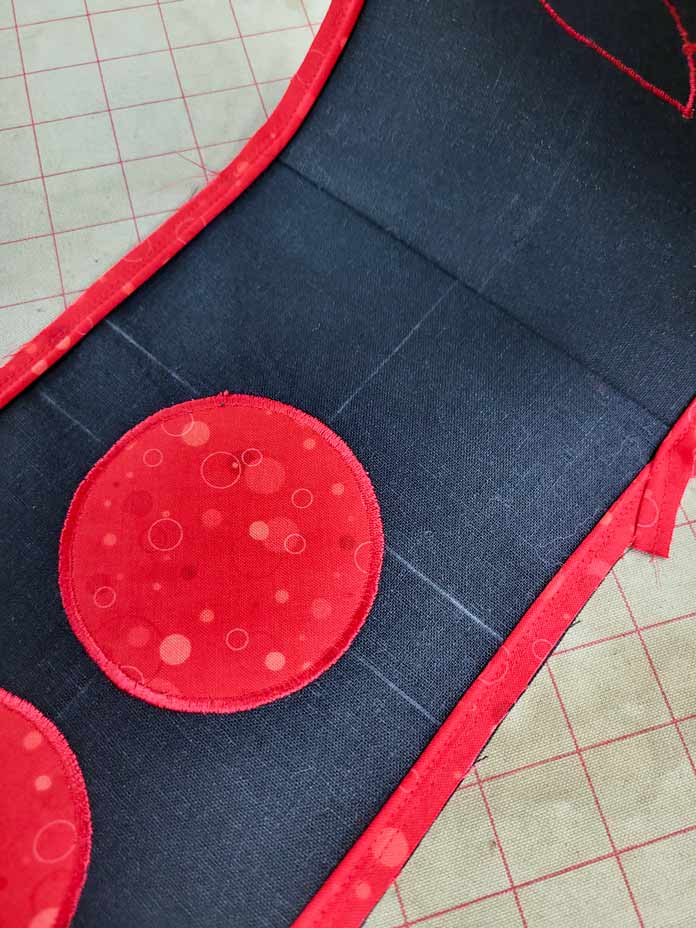 The wrap band with two rows of piping attached

I pinned (GASP – I never pin, but this was important) the lining to the top of the wrap band. Then using a ¼” seam, I stitched all the way around. Remember, you want the right sides together, and I used the Piping Foot again! 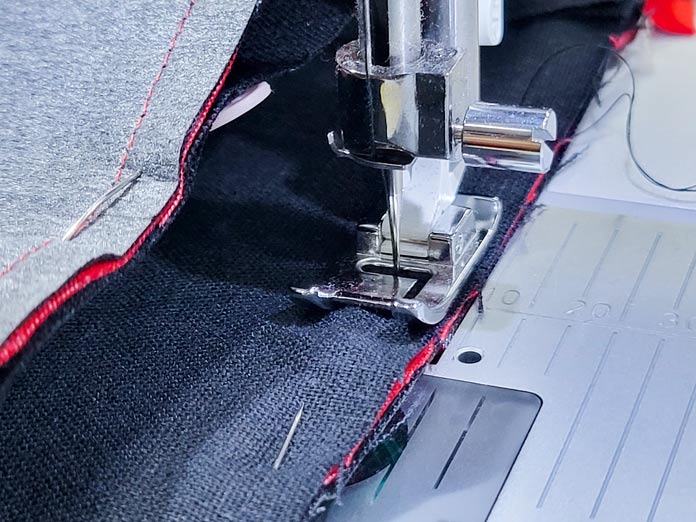 Sewing the lining to the front of the wrap band

Turn the wrap band right side out and tuck the lining inside the wrap band. Finger press the top along the piping to ensure it’s flat, and press it. 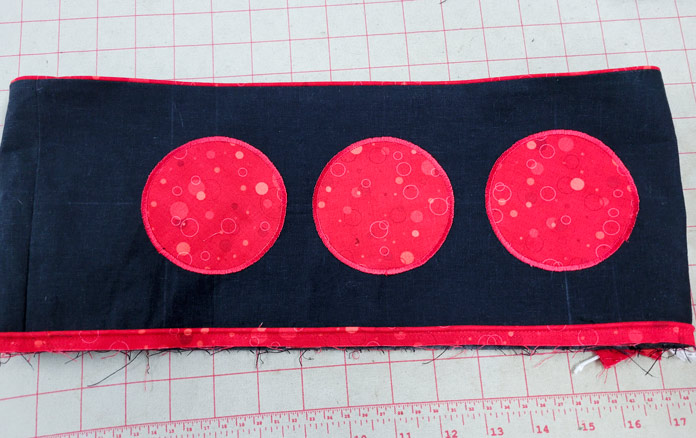 The lining and the front of the wrap band are attached

Then I folded under the edge of the lining by ¼” and pinned it to the bottom edge of the wrap band. Pin it right up to the piping. It sounds fiddly, but it went pretty fast. 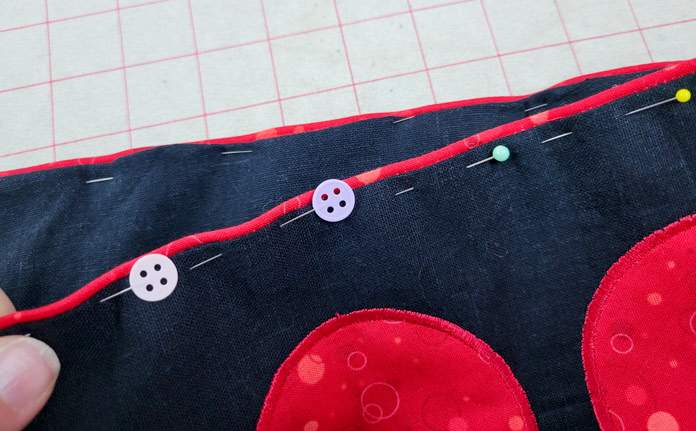 The seam allowances are folded in and pinned to each other

Then I topstitched the seam. I stitched from the lining side, so technically, my pins should be on the other side in the photo above. Learn by making mistakes! I used a black piecing thread in the top and bottom and carefully stitched the bottom of the lining in place. I used my Safety Stiletto to help hold the pieces in place. 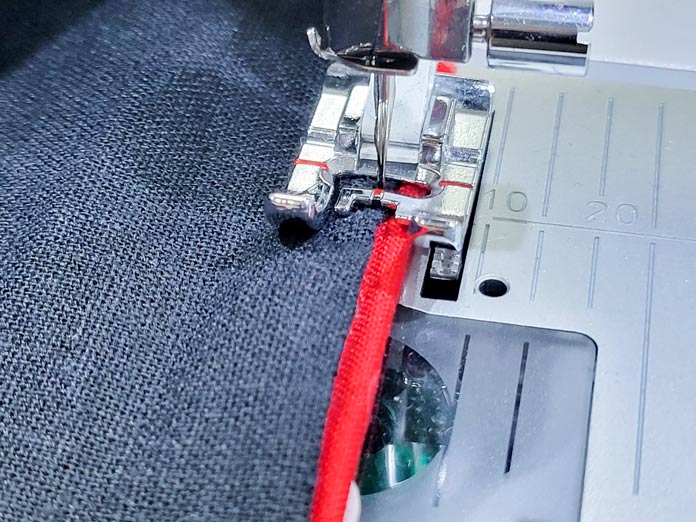 Topstitching the bottom of the wrap band together

After stitching the bottom, I topstitched the top edge to match. 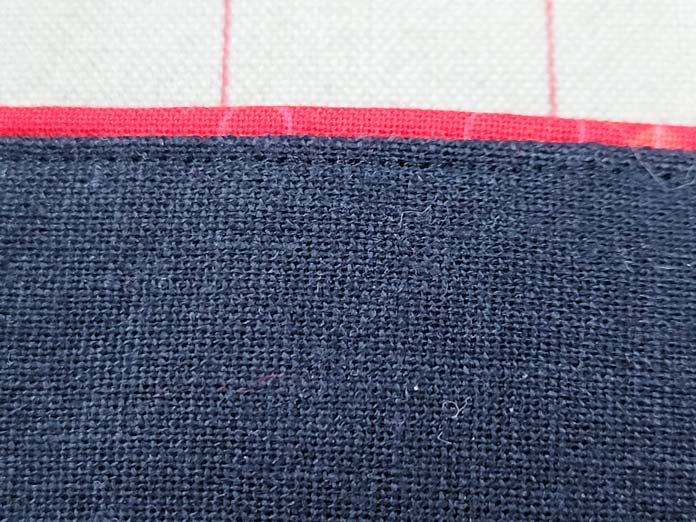 And here’s the wrap band. I have to say I impressed myself. Initially, I thought it would be a lot of work, but it was easy and didn’t take long, even though there were a few learning curves along the way. Oh yes, I want to make more!

Then I slipped it onto the red and black plaid cushion, and OH MY — it’s stunning. 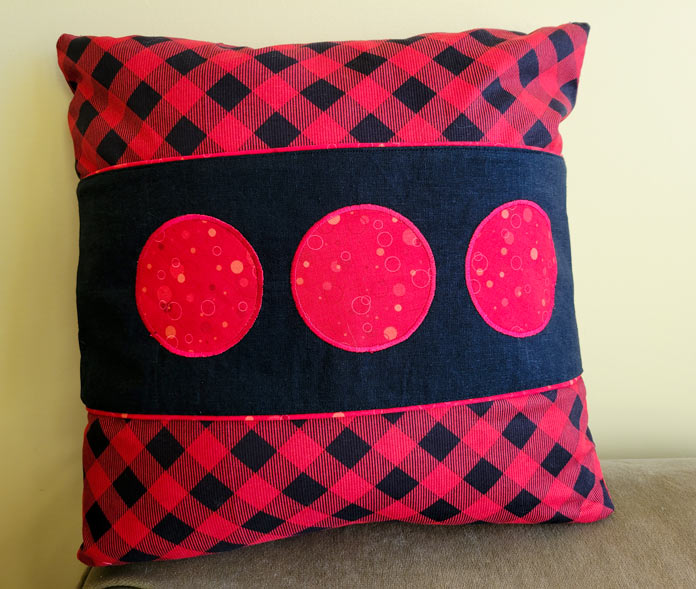 The applique side of the wrap band

And here’s the stitched side. I did take liberties with the middle tulip, and that’s what happens when you put the push pin in the wrong place. It looks great, and I gave myself more options with the tulip template. 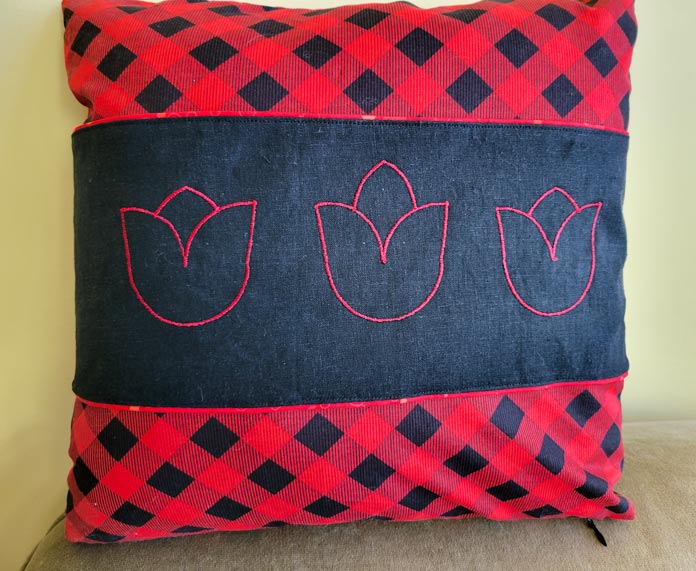 The stitching side of the wrap band

Here’s one of the applique cushions and the plaid cushion with the wrap band. I’m so excited – I need to decorate a room around these cushion covers! 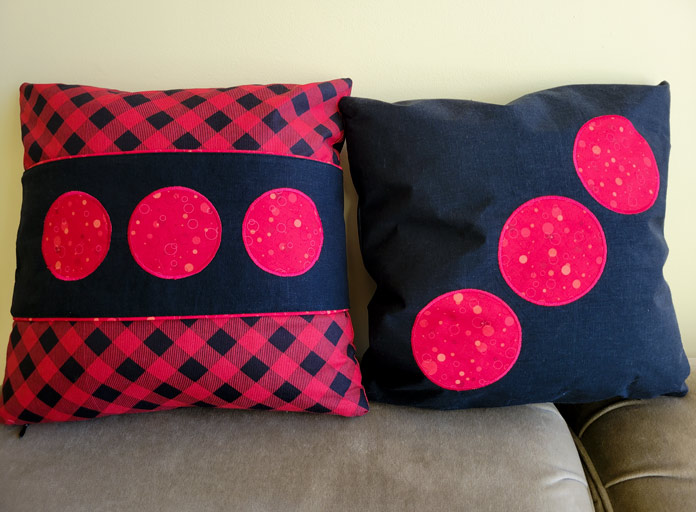 That’s a WRAP! I can’t believe how easy it was to use the Husqvarna Viking Circular Attachment to create those perfect circles, and I can create many more applique shapes. The Husqvarna Viking Tribute 150C was a workhorse. It handled everything I threw at it, even the triple stitch with topstitching thread! 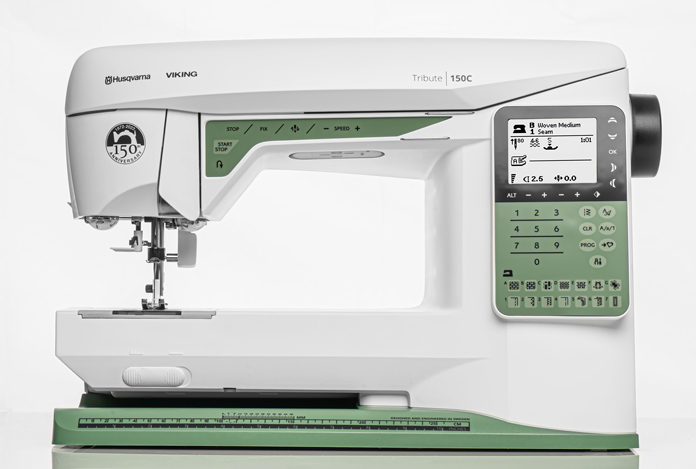 Wow – the possibilities are endless with these tools, and I’m off to explore other options. How many cushions are too many? I could make quilt blocks or wall hangings or whatever I wanted. How many hours are there in a day?

I digress! Get creative and start designing your masterpieces!

This is part 5 of 5 in this series

Creating holiday magic is easy with the PFAFF creative ambition 640

Inserting an invisible zipper on a cushion cover...

Quilting with the Husqvarna Viking Tribute 150C: How...

Straight stitching with a perfect seam allowance: How...