Stitching words and custom stitches to enhance a quilted placemat

So many projects and so many ways to complete them with the features of the PFAFF creative 3.0! In yesterday’s post I shared the beginning of my free motion quilting adventure and the features on the creative 3.0 which made it a success AND not that scary at all! In today’s post, I’ll show you how I used the sequencing feature to add words to a quilted placemat.

This placemat has been waiting to be quilted since last spring! I thought it would be fun to quilt some words on it to go with all the text in the fabric. 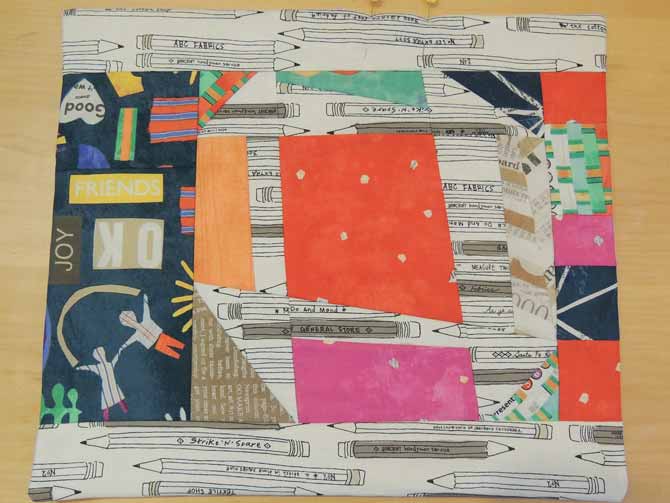 While looking through the manual for the creative 3.0 I read about the sequencing feature and realized this is how I could do it! 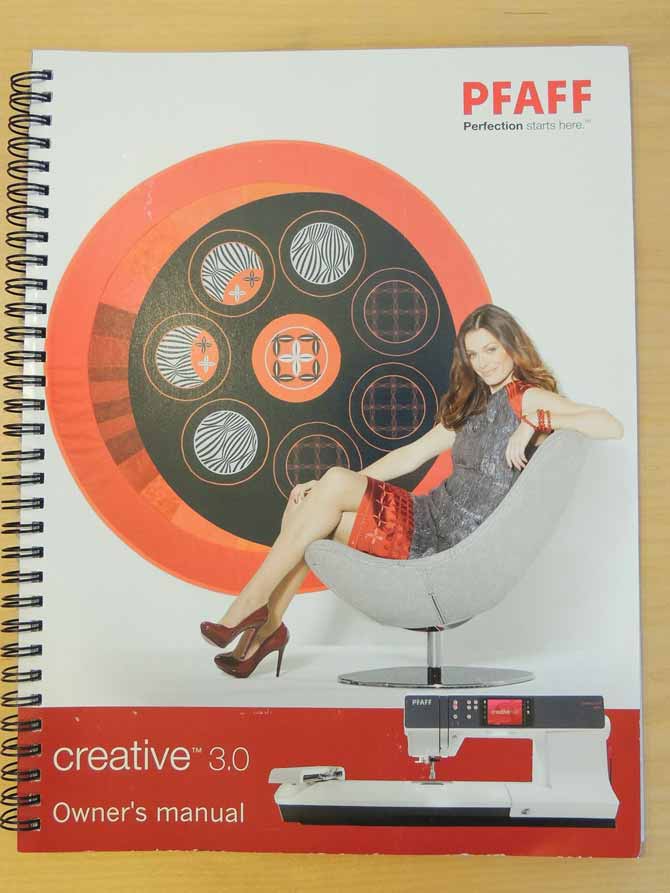 Manual for the creative 3.0

The Color Touch Screen makes it easy to see what I’m doing as I select stitches and letters. I also used the stylus that comes with the creative 3.0 to select the letters on the touch screen. 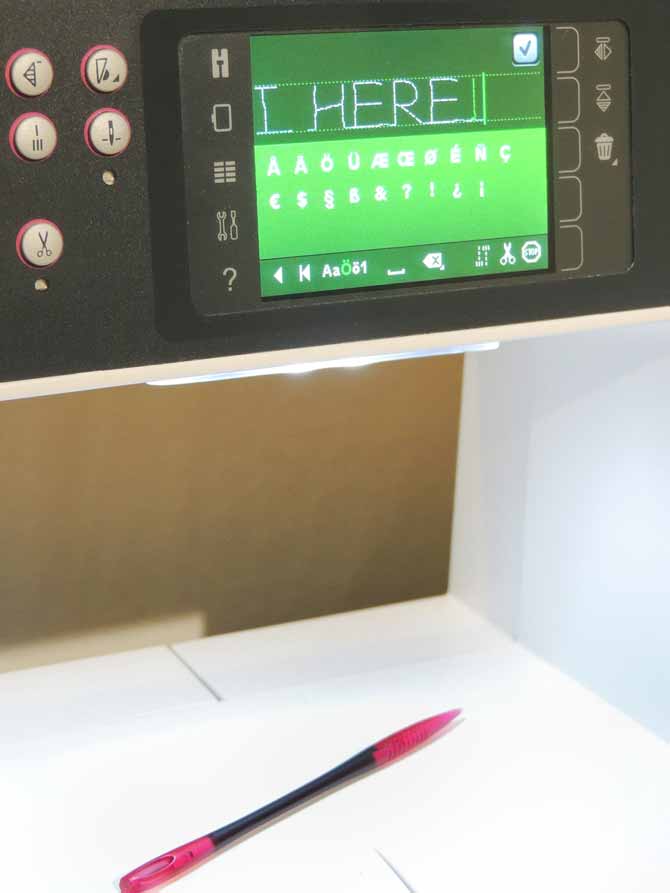 The stylus makes it easy to select from the Color Touch Screen.

My first design included a stitch before and after the words. I also chose to add a stop command (so the sequence wouldn’t repeat), a tie-off and a thread snip command. 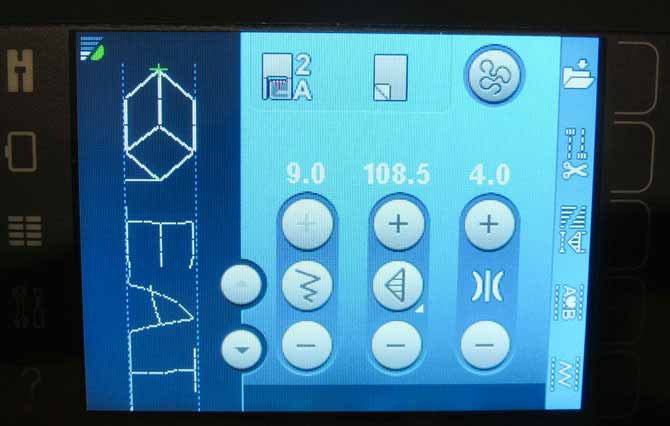 My first sequence ready to stitch.

I cut a 5″ piece of quilting fabric and stabilizer to test my sequence on – I wanted to make sure that it would fit in the space I had on the placemat.

I used the needle down button, lowered the machine speed, and pressed the start/stop button for the machine to stitch out the design.

I didn’t like how the sequence bunched up at the end so I edited it, removed the designs at the beginning and end, and tried stitching it again. 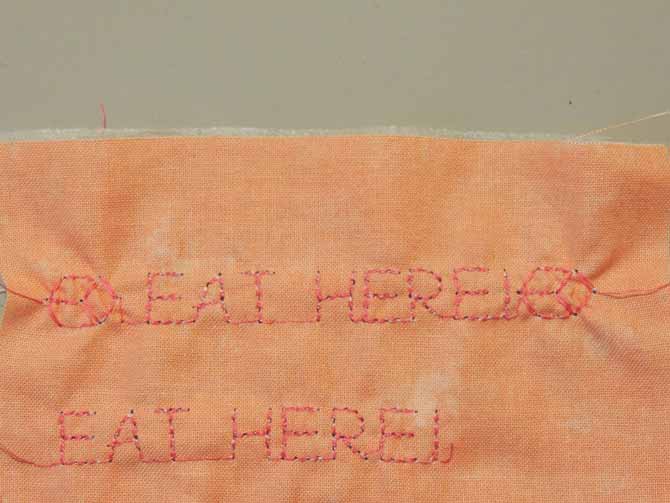 Sequence with and without designs at beginning and end

I saved the sequence in the personal files on the creative 3.0 so that I could try a different sequence. 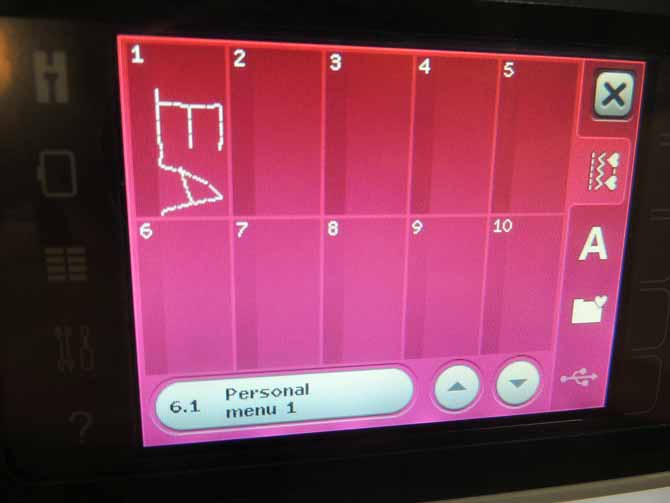 For this sample, I used a cursive font! 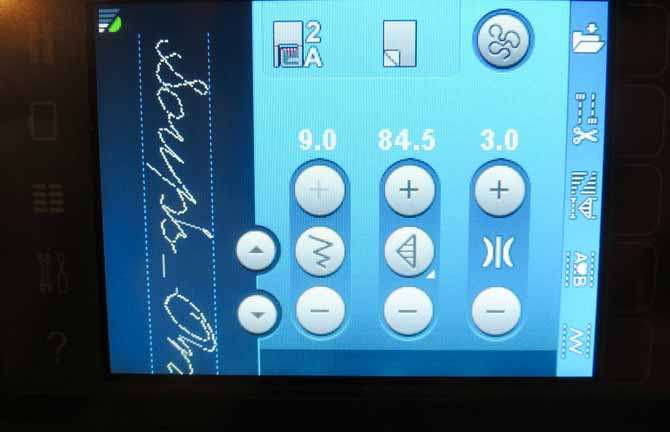 For my second sequence, I used a built-in cross stitch before and after the words. After the first try, I realized it was hard to see the pink thread on the orange fabric! So I tried stitching it a second time using blue thread. This time the thread broke! But thanks to the features on the creative 3.0, I was able to re-thread the machine and move the needle to start in the same place where the thread had broken. 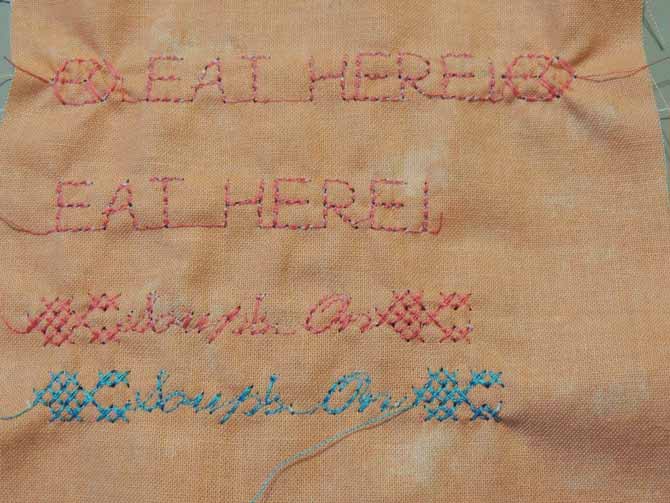 In the end, I went back to my first-word sequence and used the blue thread. I really like how the sequence turned out – it fit the space just the way I wanted. 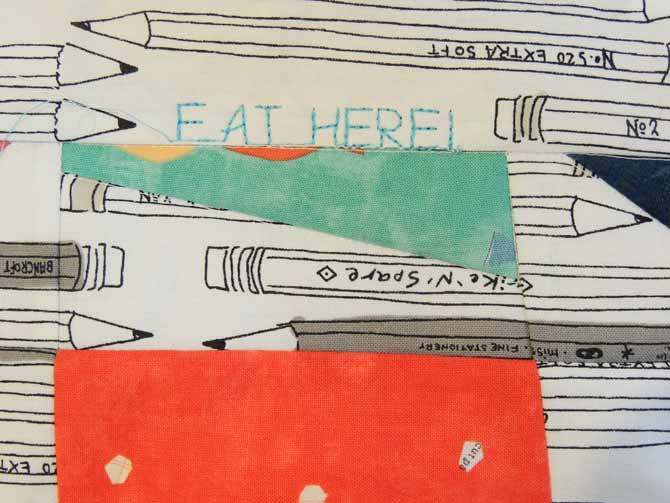 Sequence stitched out on placemat

Once I added the words I thought I would add a few more decorative stitches to finish off the quilting on the placemat. I used the same color and added a few of the machine’s built-in quilting stitches. 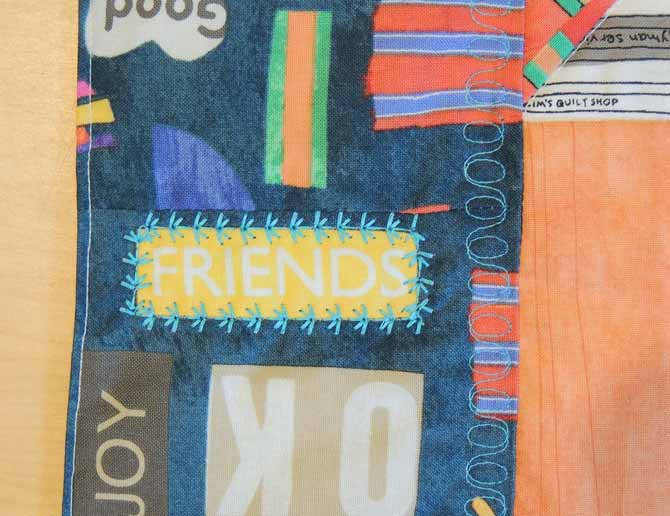 Around the “friends” patch of yellow, I used crazy patch quilt stitch 2.4.17. Using the guides on the presser foot and lining up the start position of the stitching by looking at the Color Touch Screen, I was able to put the stitches right on the edge of the yellow rectangle and I really like how it turned out!

Then I added a bit more turquoise stitching by using it to secure the edges of the two long side rectangles. I used the crazy patch stitch 2.4.2, again lining up the stitching with the guides provided on the foot. I also used the start/stop button for these designs and focused on keeping it stitching out straight by adjusting the machine’s speed down a bit. 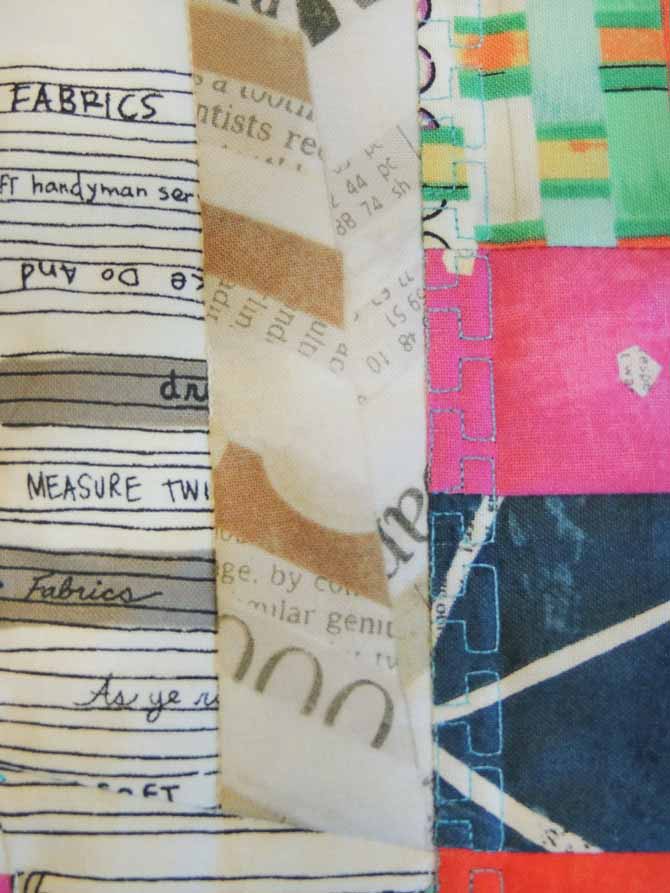 The last stitch I used was a stippling stitch 2.3.4. It required me to change to presser foot 1A – not a problem! It’s so easy to push down to release the foot and push up to engage the new one! 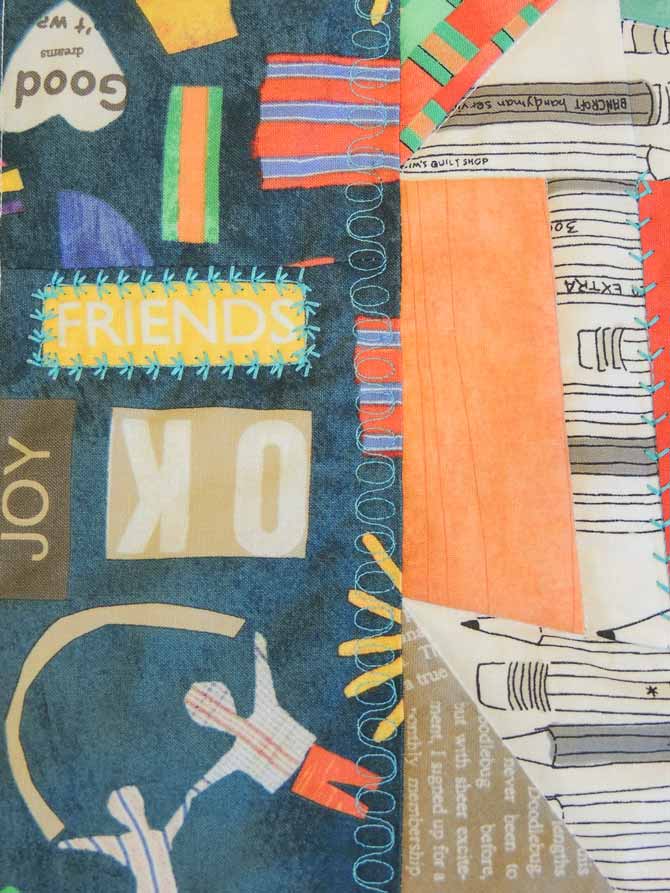 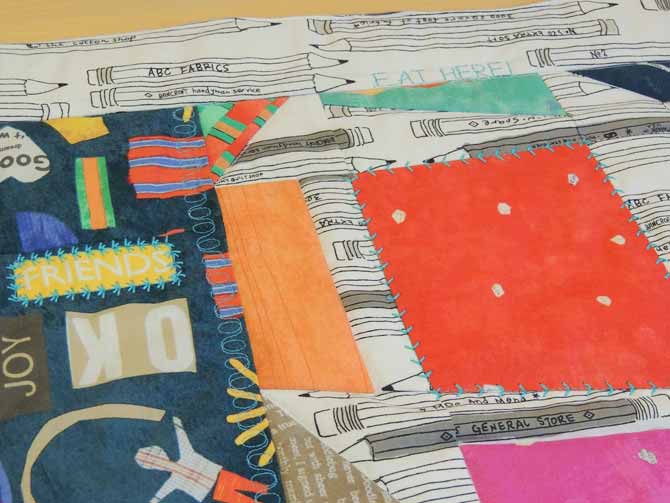 Placemat with sequencing and decorative stitches

The placemat is finished and ready to use – finally! I’m so glad I used the sequencing feature of the creative 3.0 to add my own words – a whimsical touch to be enjoyed while using the placemat this summer.
Stay tuned – this machine does embroidery too and I’m going to show you what it can do in tomorrow’s post.

This is part 3 of 5 in this series.
Go back to part 2: A beginner’s guide to free motion quilting: tension, stitches and speed

Go to part 4: Exploring the plentiful custom embroidery feature of the creative 3.0

Print this page or save as a PDF
0qs160custom stitchesembroidering wordsPFAFF creative 3.0quilted placemats
FacebookTwitterPinterestLinkedinRedditWhatsappTelegramEmail

Exploring the plentiful custom embroidery feature of the creative 3.0

Finishing up the Dear Santa Tabletopper in time...

How the selvage and the creative 3.0 save...

Turning an embroidery design into a hospice block...

Using the envelope method to finish the Autumn...

Hooping it up with the PFAFF creative 3.0...

Hooping it up with the PFAFF creative...