Home » QUILTsocial » The Story of an Airman’s First Quilt

The Story of an Airman’s First Quilt

A few weeks ago, Carla asked me if I would be interested in being a guest blogger on QUILTsocial.com.  After a few emails, a phone call and lots of questions, I said, “Sure, why not?”

I quickly realized that agreeing to be a blogger was easier than actually coming up with blogging topics. So, after much reflecting, I decided that my introductory subject should probably be about me.

I am Paul Leger; born and raised in Moncton, New Brunswick, now residing in Ottawa, Canada. In May 1990 when I started quilting I was a member of the Canadian Armed Forces stationed in Victoria, British Columbia. I had just purchased 10 new Air Force shirts, within a few days had ruined three of them. Since they were military shirts they had to be thrown away, but since my mother always told me to remove the buttons before throwing shirts away, I did just that and kept the buttons.

For some reason, once the buttons were removed I threw the shirts into a corner in my bedroom. I have no idea why I did not put them directly into the trash. The next day I remember thinking that the shirt fabric was still new and should not just be thrown away; so, I sat there and cut up the shirts to save what pieces I could and again threw everything into the corner. About two days later, I remembered that in pioneer times quilts would be made from old clothing, so, I decided: might as well make a quilt! Once that idea came to mind I retrieved the shirts that I was preparing to donate and salvaged them all for my quilt.

Now I need to tell you, that yes, I owned a sewing machine at that time (my mother made me buy one for emergencies); and that the only thing that I had sewn before were two “square” window panels that ended up being trapezoid: each going in different directions.

I sat at the dining room table, and after I sketched a pattern and made some templates I started cutting my shirt fabric. 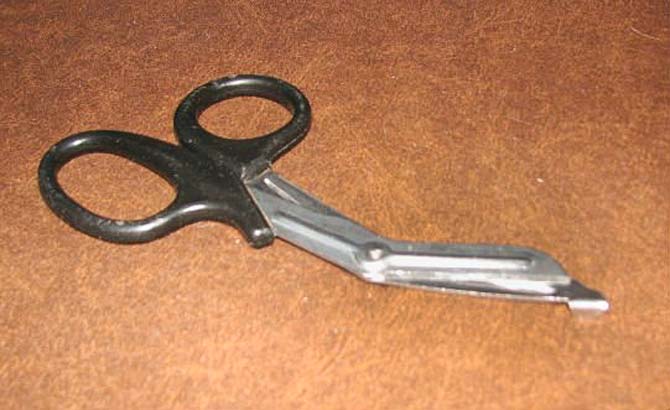 Yes, I actually used the scissors in the photo to cut the fabric for my first, second, and third quilt tops and then I discovered an amazing tool: the rotary cutter. After a few evenings of sewing with thread that you could buy at 3 spools for $1 (or 4 for a $1 when on sale) I completed my very first quilt top. 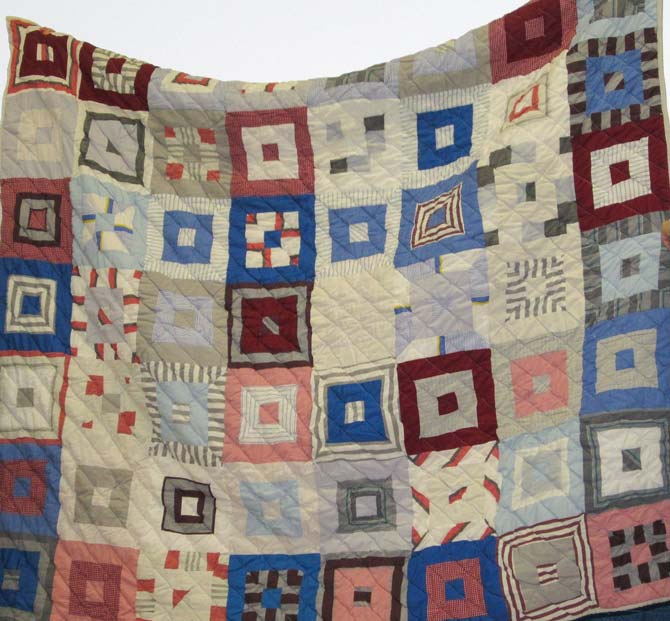 One thing that puzzled me once my blocks were made was: why weren’t my blocks 10” square like my pattern? Ah…the issues of being a newbie quilter…my reactions were both: what did I do wrong? And, oh well.

Moving forward four years to the fall of 1994, Barrie, Ontario. It was the first night of my first quilt class and Joan Winter was the instructor. Joan was explaining templates and the need to ensure to add ¼” seam allowance on all sides of the template. A light bulb flickered and lit up in my head: seam allowance?!? Now I knew why my first quilt blocks were smaller than my templates; it had never occurred to me to add seam allowances on that quilt and all the quilts I had done previous to Joan’s class. That first class alone was worth the money I paid for the whole course! Thank you, Joan!

Now, 26 years later, almost to the day, with 160+ quilts to my credit, here I am: a quilter, a teacher, a speaker and now a guest blogger on QUILTsocial. Who would have guessed that all those years ago?

Yo-yos and echo quilting to finish a quilt

Hi Paul. I just found this site and was interested in your history on quilting, although I pretty well knew it. As your teacher I must tell you that I am very proud of you and your achievements. You learned the quilting rules and techniques very well, even though there are no quilt police. Keep up the good work

Good on your mom for making sure you had a sewing machine.
Learning as you go is a great way to do it. Thank you sharing your inspiring story, and welcome to QUILTsocial.

I knew better than not to do as she suggested. I am so glad I have. My first and second machines have been passed down to my nieces.I now enjoy newer machines (I now have a few). Thanks for your comment.

So proud that you’re my uncle… you are such an amazing talent. Can’t wait to read your next blog post.

There is a great lesson there for newbies. Don’t over think quilting. Just learn the hacks along the way. A beginner’s class is worth the time and $. The same is true of classes and tutorials along the way to a new skill. And I also have a stack old clothes that had great fabric. And a few quilts that contain those fabrics! Thanks for sharing your great memories and inspiration.

Hi Jeannie
It is a great lesson for beginners but every now in then I need to sit back ans also not overthink what I am working on.
Thanks for your comment
Paul