Home » HA Kidd » H.A. Kidd sewing notions » What to do with your used sewing needles?

What to do with your used sewing needles?

Good morning. I hope you’re all enjoying a Saturday morning coffee and getting ready for a day filled with sewing!

I was asked to write a post on what to do with used sewing pins and needles. Here’s a quick and easy read on the topic.

Using social media, I asked a very scientific survey question: What do you do with your used sewing needles? Then, I waited. Yes, I know social media is not the most scientific place to do research but for this question, I knew I’d get some great, creative answers. 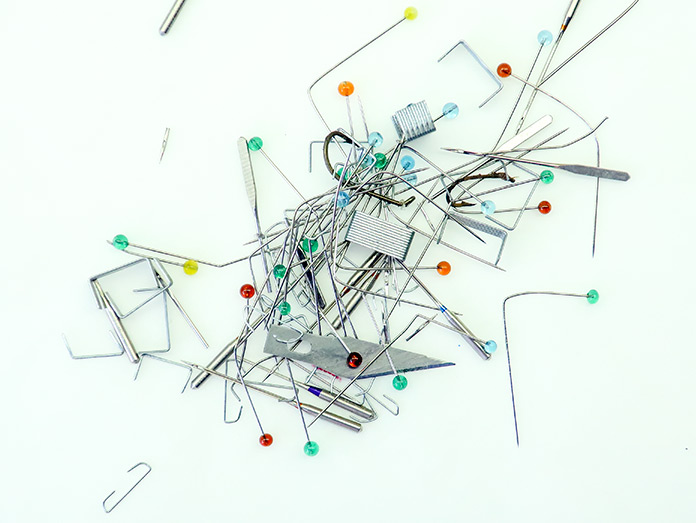 Pins, needles and blades, oh my!

Many sewists use their sewing machine needles until they bend, break or the tip of the needle becomes too dull to use. Others change their needles at the start of every new project, while still others change needles after every eight hours of sewing time! For yet another group, the needle is changed after four to five bobbin changes.

For those who change their needles often, there may still be some life left in their used needles. I’d like to suggest those needles be saved and donated. I do this regularly by keeping various empty sewing needle containers and refilling them with still-usable needles. Once I’ve filled a few containers, I donate them to worthy causes, such as a Ladies’ Co-Op in Nicaragua or to a group in Uganda (easily found on a Google search). My next donation could end up in Haiti! You may also wish to donate them to local schools or community groups that offer sewing instruction.

TIP Make a mark on the empty needle container to identify clearly that it contains used needles. I marked mine with a small red line as shown in the photo below. 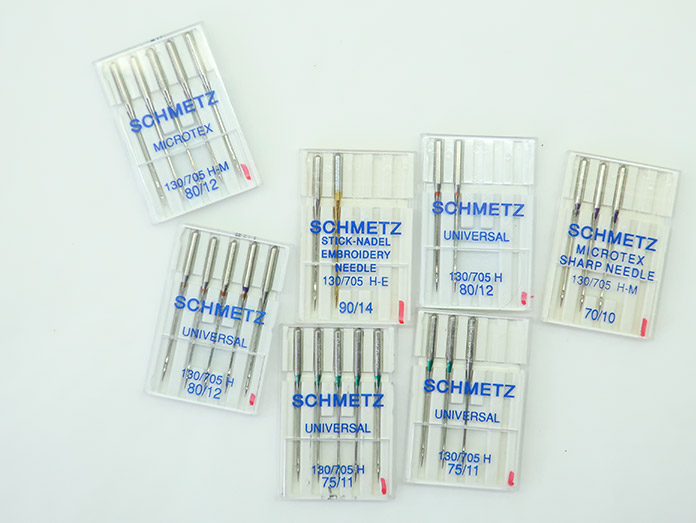 Now that you’re doing your bit for the planet and society with gently used pins and needles, what’s to be done with pins, needles and blades that are truly beyond reuse?

I can tell you what we shouldn’t do: throw them in the trash can or in the recycling bin!

We don’t want them to fall on the floor or the ground while en route to the garbage or recycling truck! Any small hole in a garbage bag could cause the pins and needles to fall out and become a hazard for humans and wildlife. I’ve seen plenty of items from garbage and recycling bins end up on the ground when the bin is being emptied into the recycling truck. I can tell you, the last thing I want is a dirty pin sticking me in the foot! 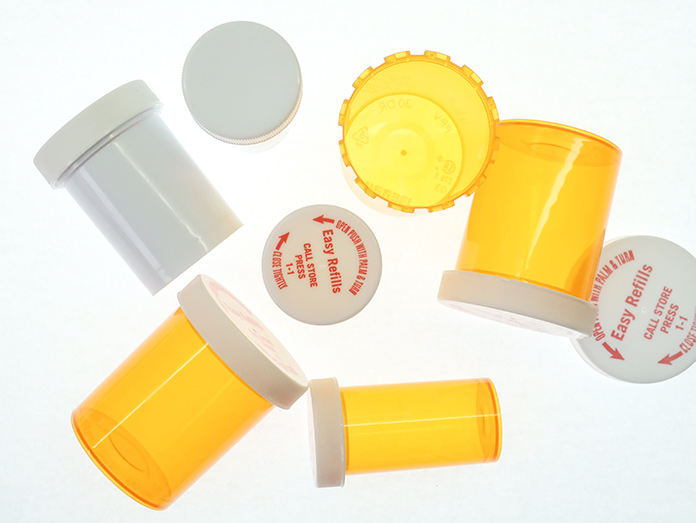 Used pill bottles for the safekeeping of used pins and needles.

A used spice jar or tin is another option for safely storing broken and bent needles and pins.

There are a couple of reasons I like the idea of using a spice jar or tin as a used pin container. The most obvious is the cap comes off easily. Once the cap is off, just put your used pins and needles through the holes. If the bottle tips over without the lid, chances are the pins and needles won’t fall out.

I also like the spice tin for its wider, semi-circular slot into which you can put small rotary cutting blades. 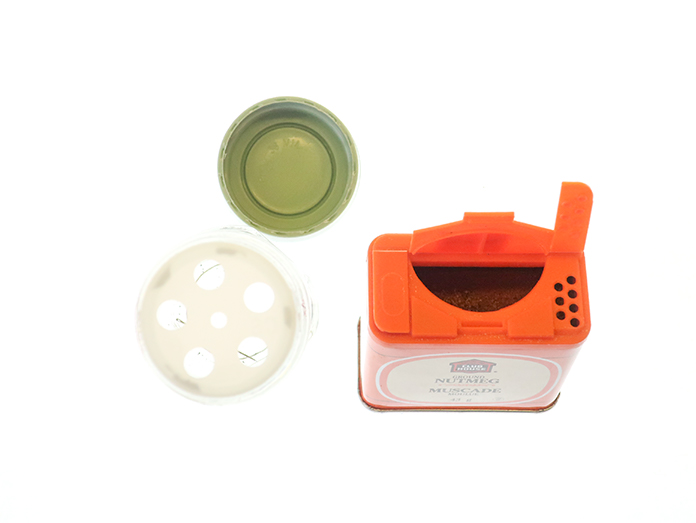 An old spice jar or tin for the safekeeping of old needles and pins.

If there are no empty prescription bottles or spice containers lying around your home, you can always buy spice or mint containers – such as those in the photo below – to safely store your broken pins, needles and rotary cutting blades. 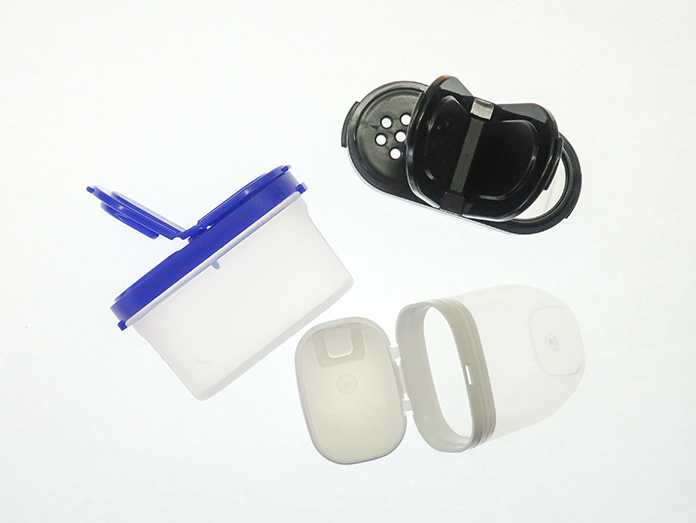 Commercially available spice or mint containers for the safekeeping of pins and needles.

There are many other types of containers that can be used. One more I’ll mention is a sharps container. Some people have them for medical reasons, to safely dispose of syringe needles. Since it would take a few lifetimes to fill a sharps container with used sewing pins, needles and blades, I wouldn’t rush out to get one.

Another question I asked via social media was: What do you do when your containers are full?

Most who answered said they take them to their local pharmacy for proper sharps disposal. When, and if, I ever fill a container, I now know where to take it!

Although I did not mention them in this post, there are many other dangerous, sharp metal objects that I put in my little container. I’ve also used my container for used staples, fishhooks, X-Acto knife blades and even razor blades! 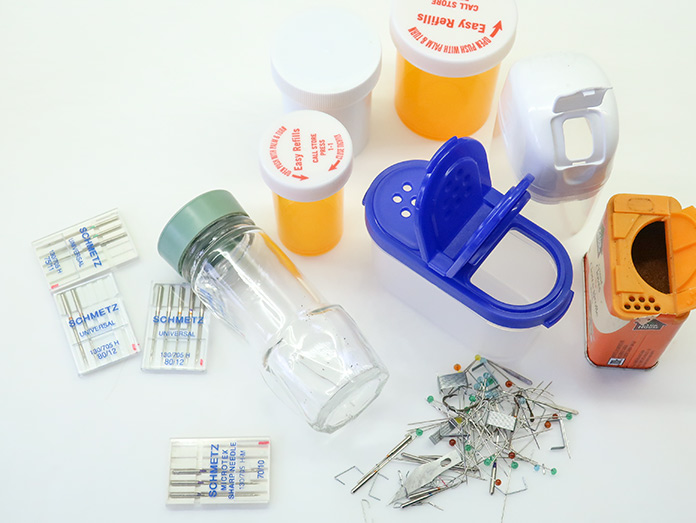 No matter how long you use or how often you change your sewing needles, please dispose of them carefully and responsibly. You can also check with your local municipality’s garbage and recycling department to see if they collect used pins, needles and rotary blades for scrap metal recycling.

I’ll be back on Monday to try out some new Gütermann threads! Come back then to see the fun project we get to work on. Now, go sew and be careful not to break a needle!

Print this page or save as a PDF
0qs350notionstutorials
FacebookTwitterPinterestLinkedinRedditWhatsappTelegramEmail

3 products that make foundation piecing a joy to do!

How to make a custom filler for the...

In quilting, diamonds made easy with the Sew...

THE easy way to trim Half Rectangle Triangles...

Thank you Carol. It was fun to write, I’m now trying to come up with other topics to write about.

Easily add a pop of color to...