Wifi capabilities of the Designer EPIC

Welcome back to another fun day as we explore the Husqvarna Viking Designer EPIC. You’re not going to believe some of these features. 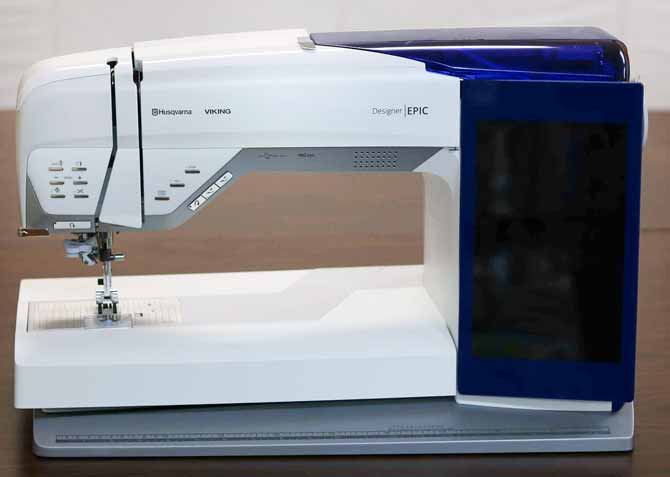 Yes, that title is not a typo. The Designer EPIC has WiFi connectivity. You can see the WiFi symbol in the top left of the screen below.

Why would you want a sewing machine to have WiFi? It makes it a snap to download embroidery patterns and it’s a breeze to keep the sewing machine up-to-date with upgrades.

It was very easy to connect the Designer EPIC to the WiFi in my house even though the router is on another floor.

I simply selected my router from the list and next thing I knew, I was connected. Now, every time I turn on the Designer EPIC, it automatically connects to the WiFi. If I don’t want to be connected to the WiFi all the time the sewing machine is on, like all smart devices, it’s a simple matter of turning the WiFi function off. 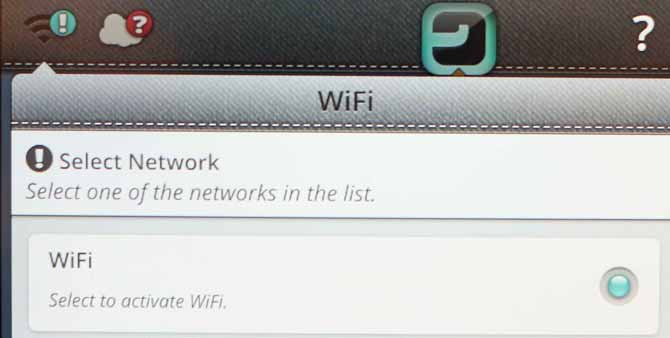 The WiFi connection has not been set up yet 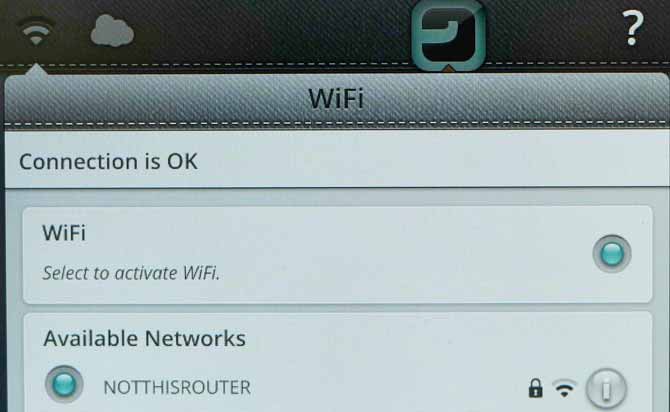 If there’s a Firmware update available, you’ll see an up arrow in the top left and this pop-up message will appear when you turn on the Designer EPIC. The first time that it appeared, I hit the middle button (NO, remind me later), but at a later time, I selected YES and the firmware upgrade downloaded and installed pretty much on its own. I think I had to hit a button after the download to start the install of the firmware. It could not have been easier.

No more having to load the upgrades onto USB sticks or take the sewing machine to the dealer, the WiFi connection makes this process painless. Once you have uploaded and installed the firmware, the up arrow in the top left will disappear until a new upgrade is available to download. 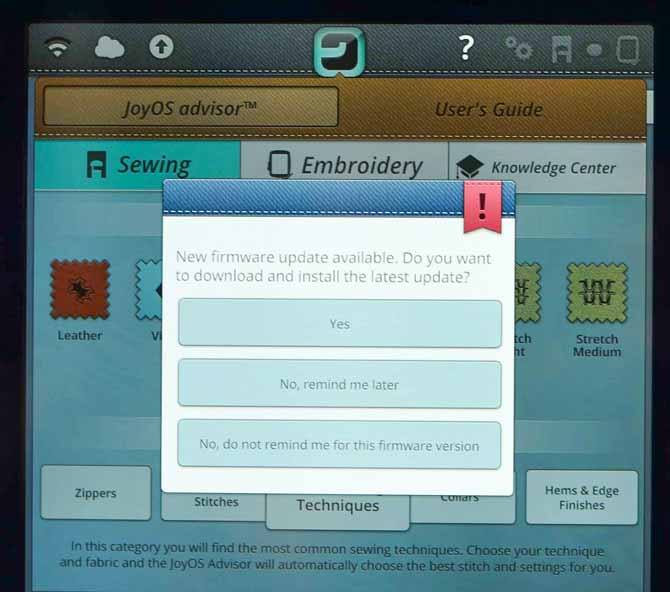 Pop up message to download and install the firmware upgrade

Believe it or not, there’s a cloud based service for the Designer EPIC where you can save and access your personal files. You can store designs, fonts, stitches and any other file that you create on the sewing machine.

As if that isn’t enough, there’s also the mySewMonitor App. Yes – an APP that you can download to your mobile device which will then provide you with information when you are using the Designer EPIC for embroidery. Things like the thread color changes, low bobbin, the stitch count and a number of other items can be monitored from your mobile device.

Wow –  that’s impressive. That means we really can be doing two things at the same time. I can’t wait to get to the embroidery section to try this out. 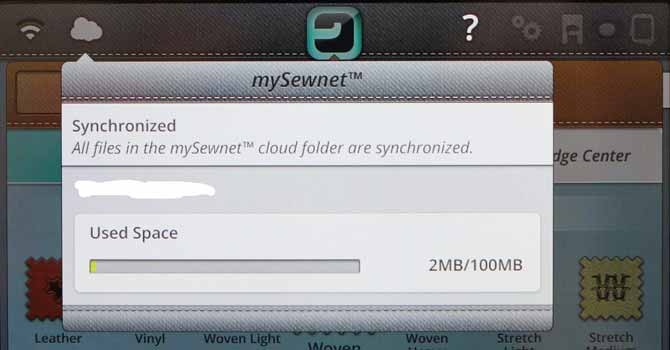 I think I’ve mentioned before that I love having options. The Designer EPIC doesn’t disappoint in this department. There are all kinds of settings that you can change as you can see from the screen shown below.

It’s possible to temporarily change some of the settings, and you can always go back to the default settings in either the sewing or embroidery modes. 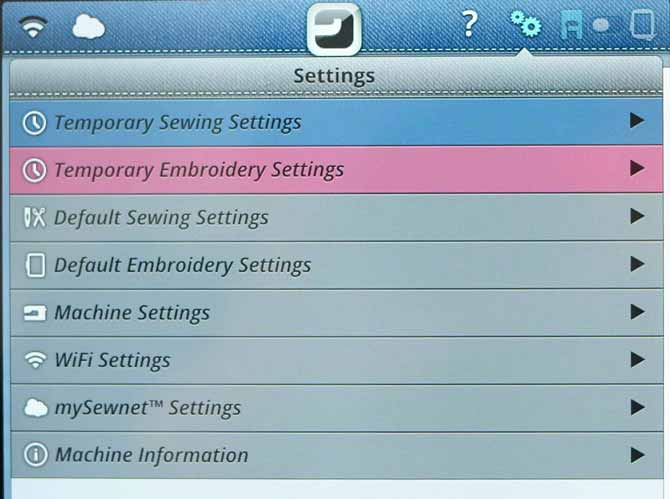 While there are many great features on the Designer EPIC, there might be a particular project where you don’t want to use one of the functions. For instance, if you’re paper piecing, you probably do not want the FIX button on. This function ties off the beginning and the end of the stitch. This function isn’t necessary for the paper piecing technique and rather than shut off the FIX function each time you start a new row of stitching, you can use the temporary settings to disable the FIX.

When you start a new project by returning to the JoyOS advisor, the sewing machine will reset itself to the default settings.

Other functions include setting the width of the twin needle being used, stitch width safety, Automatic Thread Cutter and many, many more functions can all be controlled in the Settings menus. 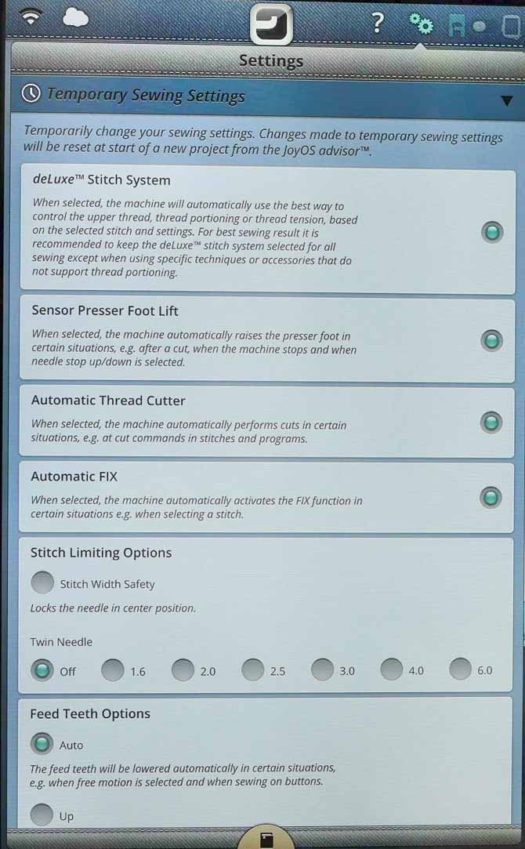 There are a lot of bells and whistles, but what about the options for sewing?  Let’s have a look.

In the photo below, I’ve chosen a straight stitch. You can see in the top left, that I’ve chosen Woven Medium as my fabric and the technique (sewing a seam) is shown on the bottom of the tablet-like screen. The stitch appears in actual size on the menu. That’s so amazing!

The presser foot and the needle size are very clearly shown at the top of the screen.

The JoyOS advisor has given me a tension setting of 4.6 based on my fabric and technique selections. However, the +/- buttons, allow me to change that tension setting if I’m not happy with it. While it would be rare to have to change the tension during the piecing process, you never know and having the ability to modify the tension is a great option.

Below that is the stitch length. While 2.5 is the default, I have the option to increase or decrease the stitch length depending on what I’m doing. However if I had chosen a different technique or fabric, the JoyOS advisor would make the appropriate selections for me.

This is such an amazing feature. Truly like having someone sitting beside you filled with much information. 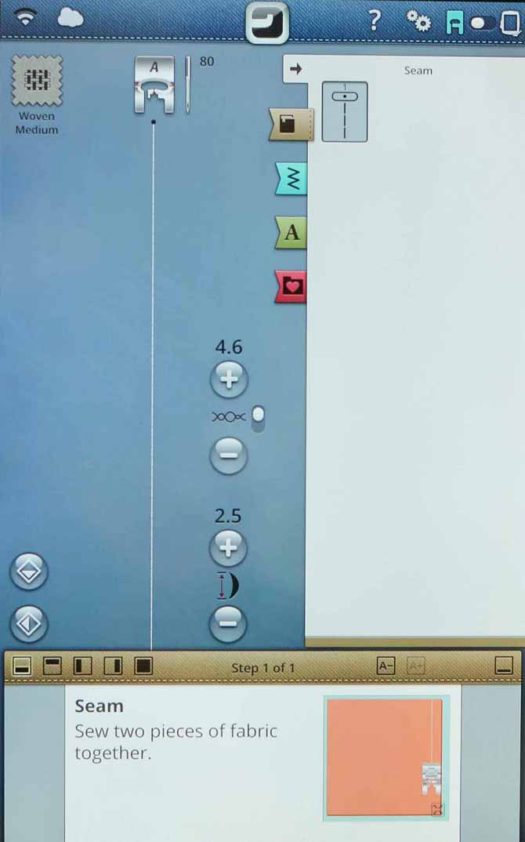 Moving the pop-up message also revealed a few more options at the bottom of the screen, including the buttons that change the width of the stitch. In the case of a straight stitch, those buttons will move the needle to the right or the left.

Stitches can be mirrored end to end or side to side. 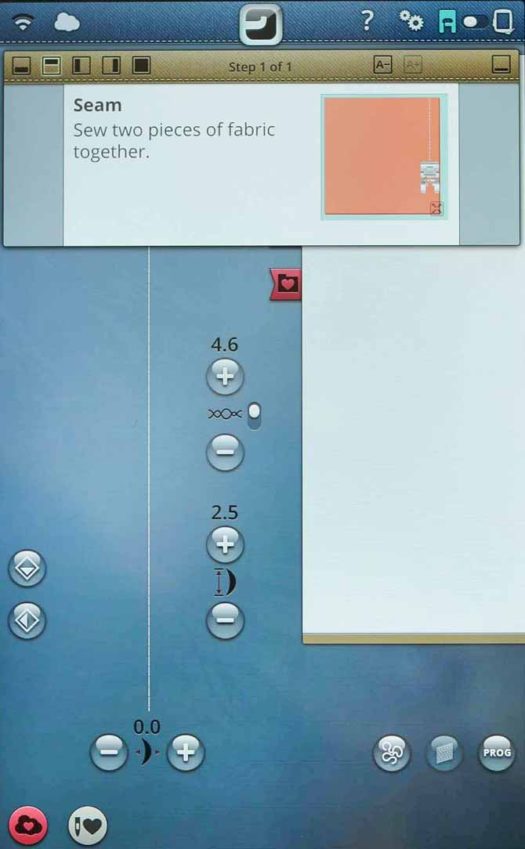 Pop-up sewing technique messages can be moved on the screen

If I change the settings from the default, the numbers change color to remind me that I’m no longer using the default settings. This is a great benefit as sometimes, we change a setting and don’t remember what the default is. When you want to return to the default, you can keep changing the number until it turns black which is the default. 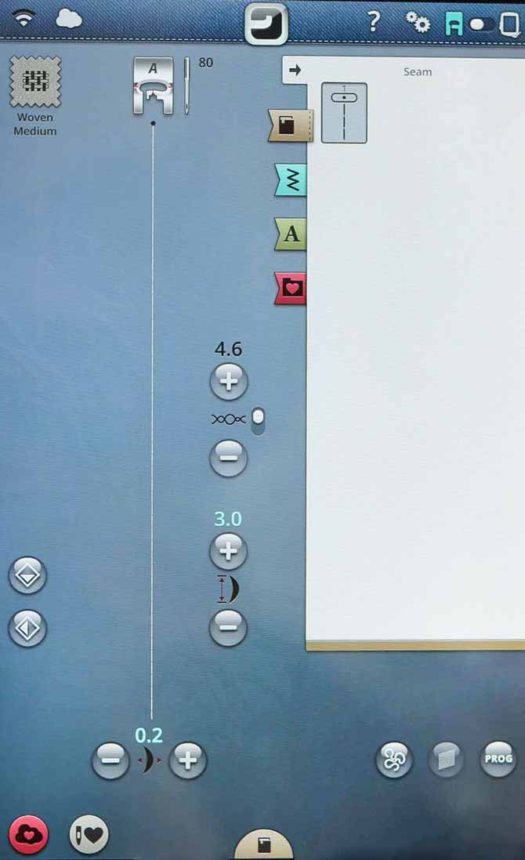 Of course, the Designer EPIC has more than a straight stitch. There are many, many menus (from A – T) of stitches. In the photo below, you can see some of the stitches in Menu A – Utility Stitches. If I want to see the stitches beyond 28, then I simply swipe up and down to see the remaining stitches in the A menu. The blue-ish area immediately below the Stitch Selection Area provides me with information about the stitch that is currently selected.

If I want to change to a different menu, then I’ll swipe side to side in the bottom part of the blue-ish area to see the various menu. I can then select a different menu and the stitches will appear in the Selection Area. 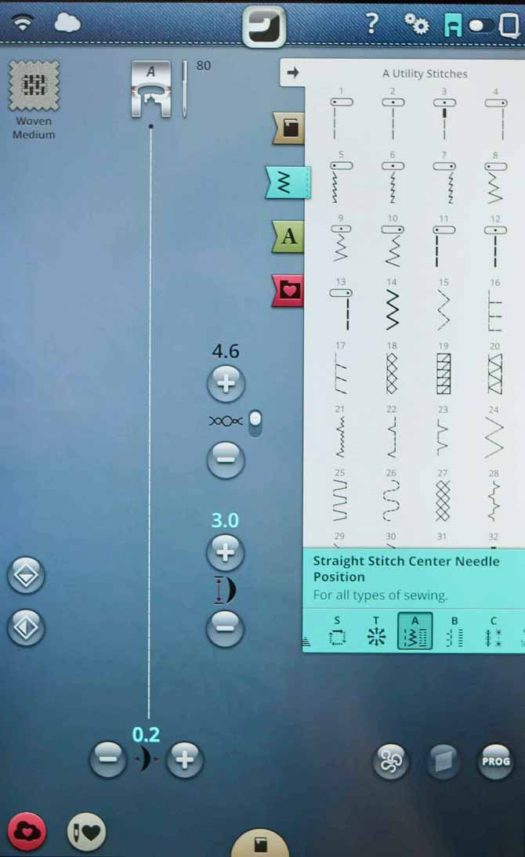 If I want to see what stitch menus are available, it’s easy to pop over to the built-in User’s Guide and check out all the menus. Of course, it’s fun to just browse through all the stitches to see what they actually look like.  So many stitches, so little time! I must find some great projects to put those stitches on. Gosh – it makes you want to sew all day and all night! 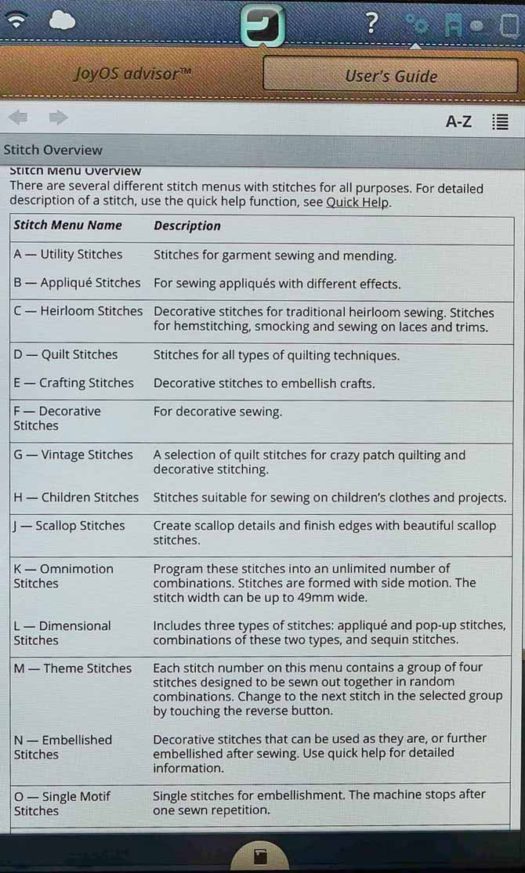 Stitch menus in the User’s Guide

There are numerous pop-up messages and when I accidentally toggled between the sewing mode and the embroidery mode (the toggle switch is in the top right of the screens above), I got this pop-up message.

Since I’m not ready for the embroidery unit yet, I closed the pop-up message and continued to play in the sewing mode. 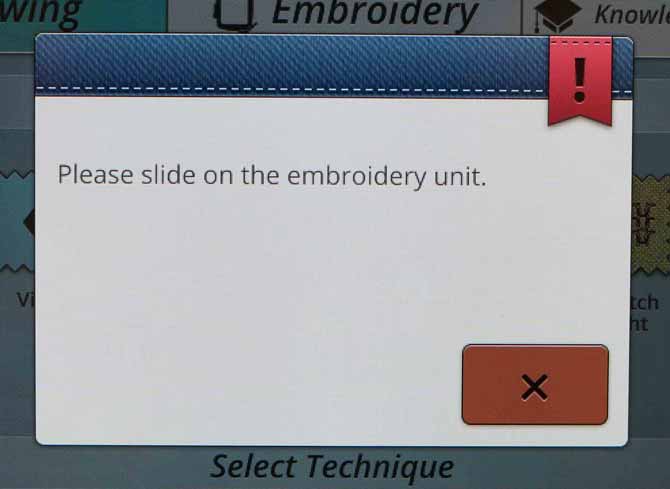 There are so many more features on the Husqvarna Viking Designer EPIC, I could write pages. I’m trying to give you the highlights, but trust me, there’s a lot more on this sewing machine than I’ve been able to cover in these blog posts.

Tomorrow, I’m going to show you some of the very useful things I discovered when I started to sew!

This is part 4 of 5 in this series.
Go back to part 3:  JoyOS Advisor and built-in manual make sewers happy

Go to part 5: Sewing techniques with the HV Designer EPIC

Reduce bulk in the seams of your...