Definition of a modern quilt

Although I live in an old stone house surrounded by farm land with a multitude of country themed quilts decorating my home, I still find that I’m drawn to the “modern” quilts that are all the rage today. I think it’s their “clean” and “uncluttered” look that’s so appealing to me as I try to simplify my hectic life. But many quilters are confused by what constitutes a “modern” quilt and why. As we explore this concept, here are 10 ways to make your quilts more “modern”.

The Modern Quilt Guild home page lists this definition of a modern quilt:

Modern quilts are primarily functional and inspired by modern design. Modern quilters work in different styles and define modern quilting in different ways, but several characteristics often appear which may help identify a modern quilt. These include, but are not limited to: the use of bold colors and prints, high contrast and graphic areas of solid color, improvisational piecing, minimalism, expansive negative space, and alternate grid work. “Modern traditionalism” or the updating of classic quilt designs is also often seen in modern quilting.

I want to critique my table runner to see if it qualifies for a “modern” design designation, but first let’s put on the binding.

Sew these strips end to end using a mitered join. For more explanation about the mitered join, see my QUILTsocial blog post from October entitled “Do You Know How to Bind a Quilt”.

Trim the edges of the table runner using a ruler and rotary cutter. 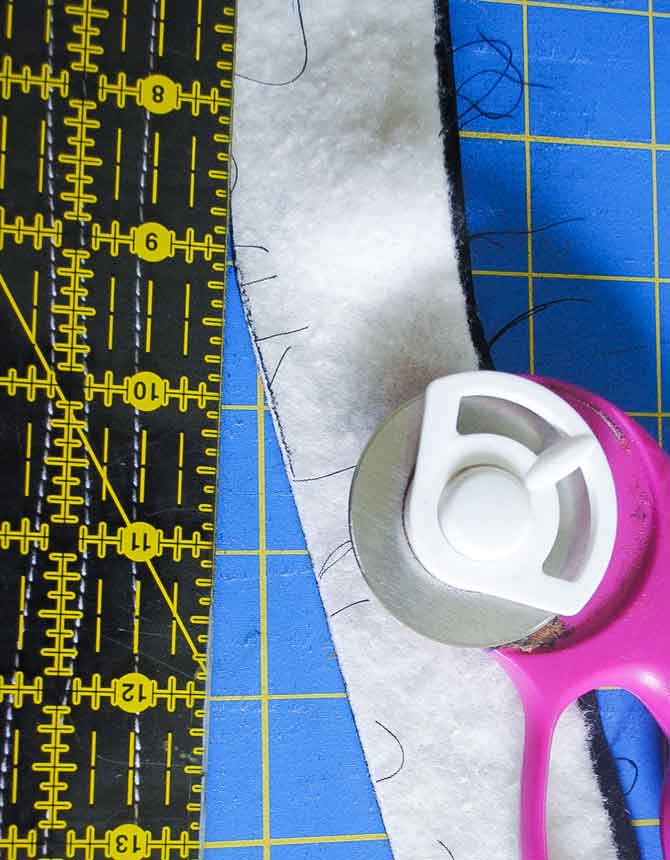 Sew the binding onto the edges of the table runner. 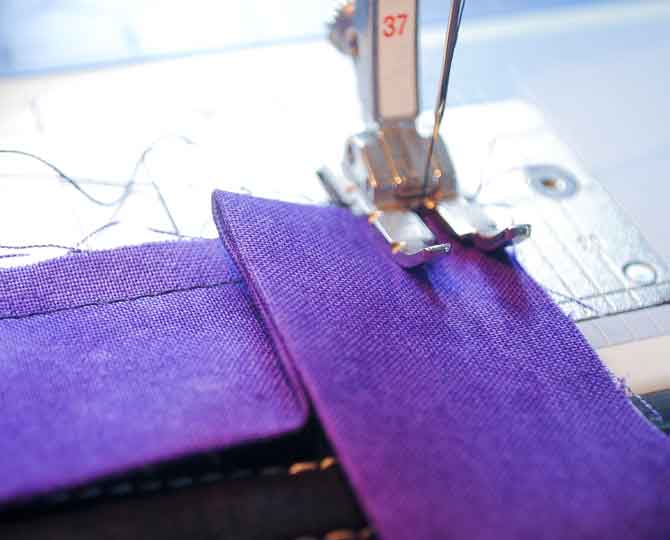 Sewing on the binding

Fold the binding to the back of the quilt and hand stitch into place. 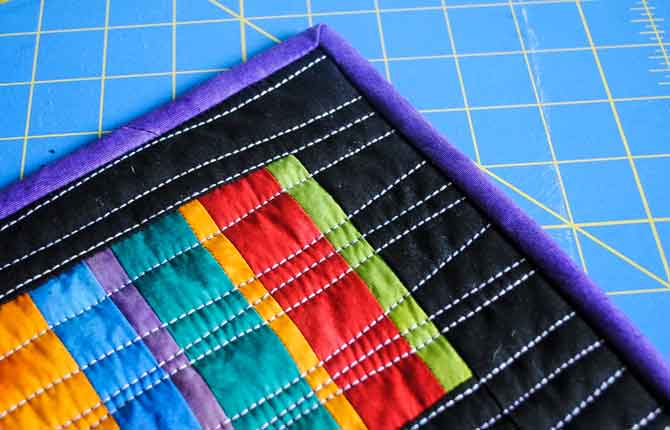 10 Ways to identify a “modern” quilt

Although I’m pretty sure that my table runner design is “modern”, I’m going to evaluate it using the definition from the Modern Quilt Guild. You can use this list to determine if any design is considered modern.

Yes, I would say that my design uses both bold colors and a graphic print.

2. Increased use of solid colors, including grey and white as neutrals

Yes, I’ve used both black and white as my neutrals along with the “solid” hand dyed fabrics.

No, my design is not asymmetrical as the Drunkard’s Path blocks are spaced evenly throughout the table runner.

4. Frequent use of improvisational piecing

No, I have no improvisational (free hand) piecing, as everything was cut accurately with templates or rotary cutter. My strip sets could have been made with a more improvisational method if I wanted to make the quilt more “modern”.

Yes, the Drunkard’s Path block is a traditional design which I have used in a non-traditional setting.

Yes, and no. Although my blocks are repeated through the table runner, they are off-set by the strip sets which gives it a less traditional look.

Yes, the design is simple, geometric and fairly minimalistic.

9. Increased use of negative space

Yes, there are definite modern influences in my quilt design.

11. But what about the quilting?

One thing that isn’t listed above is the quilting of the quilt. Modern quilts often have quilting designs such as lines, circles, triangles, spirals and other that are very sophisticated and less on the whimsical side. You won’t find hearts and flowers quilted into modern quilts but many of the landscape elements such as pebbles, bricks, waves and tree bark designs are often used. I would say that by quilting my table runner with wavy lines using a heavy thread I have added to its “modern” appeal. 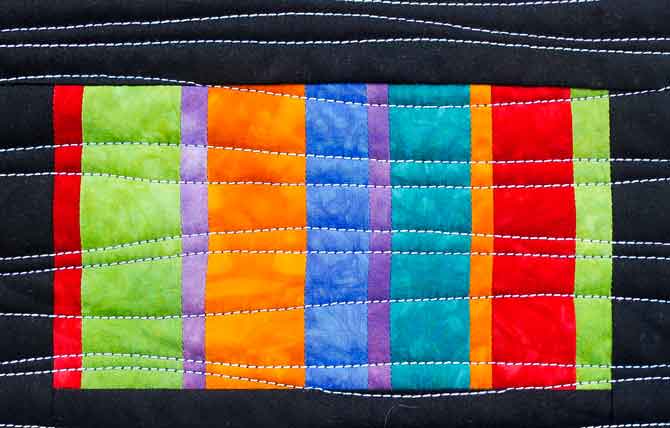 I think whether a quilt is considered “modern” or not may just be in the eye of the beholder. So, although my quilt doesn’t follow all of the “rules” of modern quilting, I would say that it definitely has a modern feel. My Jack Russell Terrier “Pugsley” seems to like it, so I would say it’s a success. Hopefully you can use these 10 ways to make your quilts more “modern” with the next quilting project that you tackle. 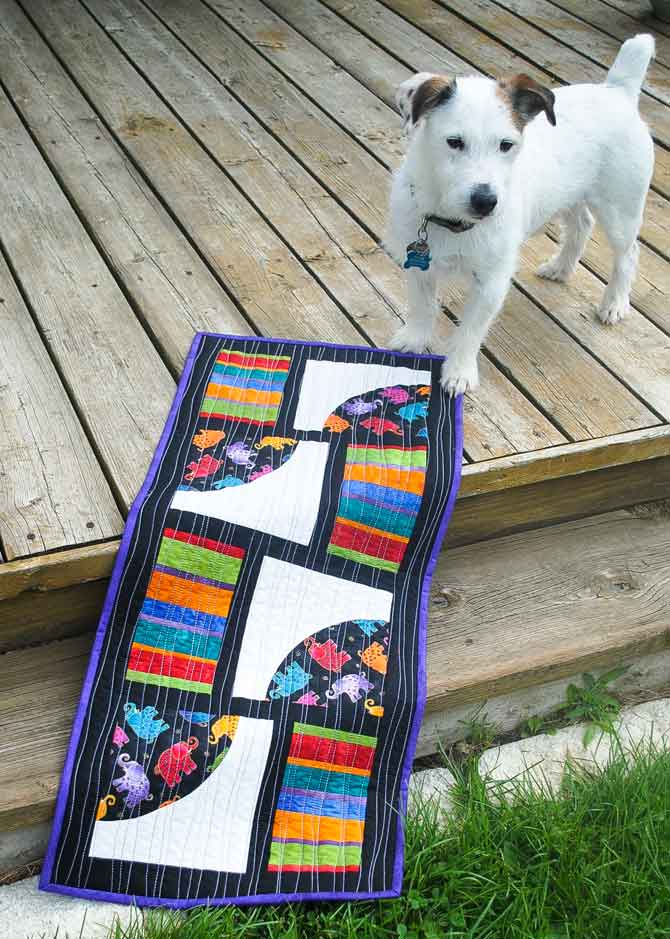 Finishing a quilt block to size: Here’s what...

Your quilting is inspirational. Thank you for sharing.

I have seen very little improvisational work in most of the modern quilts exhibited, and notice that the original definition of “modern” has been slightly modified since it was first posted. Most modern quilts use patterns (many are riffs on traditional blocks), as evidenced by the many modern pattern books and other patterns for sale. This amuses me, since those of us who started as traditional quilters 40 years ago also used patterns. What goes around comes around and there is nothing (much) new under the sun.

So true Rayna, nothing new under the sun. Thank you for your comment.

Social Distancing – the perfect time for...