I hope you’re as excited as I’m today. We’re going to be using the Husqvarna Viking Opal 690Q to make some string pieced blocks. 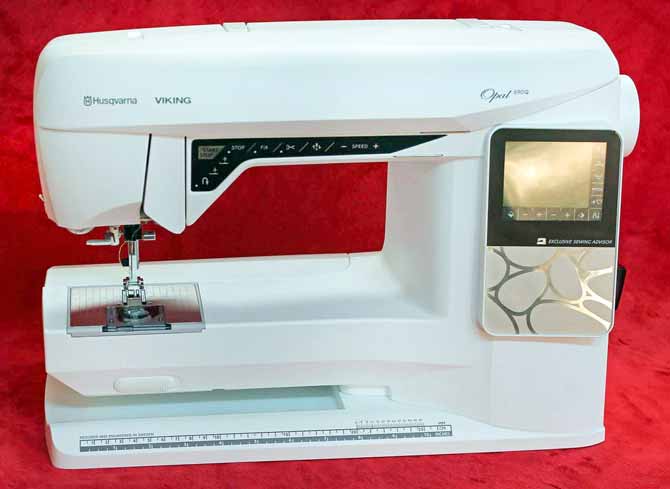 If you’re new to quilting or sewing, the string piecing technique is very forgiving. If you happen to be on a budget, string piecing is perfect. It’s amazing what you can find in the trash bin after a day of sewing with friends or at a retreat.

To protect the innocent, I’m not going to post pictures of anyone digging through the trash, but let’s just say that there are many treasures in the trash after a retreat! String piecing is also very addictive and every quilt can be completely different – all from one technique!

Before I show you how to piece the block, let’s have a look at some finished quilts. I mean quilt tops!

This first quilt was made from the stack of bright blocks that I showed you yesterday. The foundation was muslin squares that were cut at 9″ square. The blocks were string pieced on the diagonal and then trimmed to 8½”. The quilt is 8 blocks wide by 11 rows for a finished size of 64″ x 88″ which would nicely fit a twin bed. It’s a fun quilt and if you don’t happen to have someone pass along a bag of fun, bright strings, then take some of your brights and cut a strip or two off of each and use those.

String piecing is also a great opportunity to swap fabrics with friends or in a group. Have everyone bring a ¼ yard of fabric, cut it into strings and swap with each other to get a greater variety of fabrics. 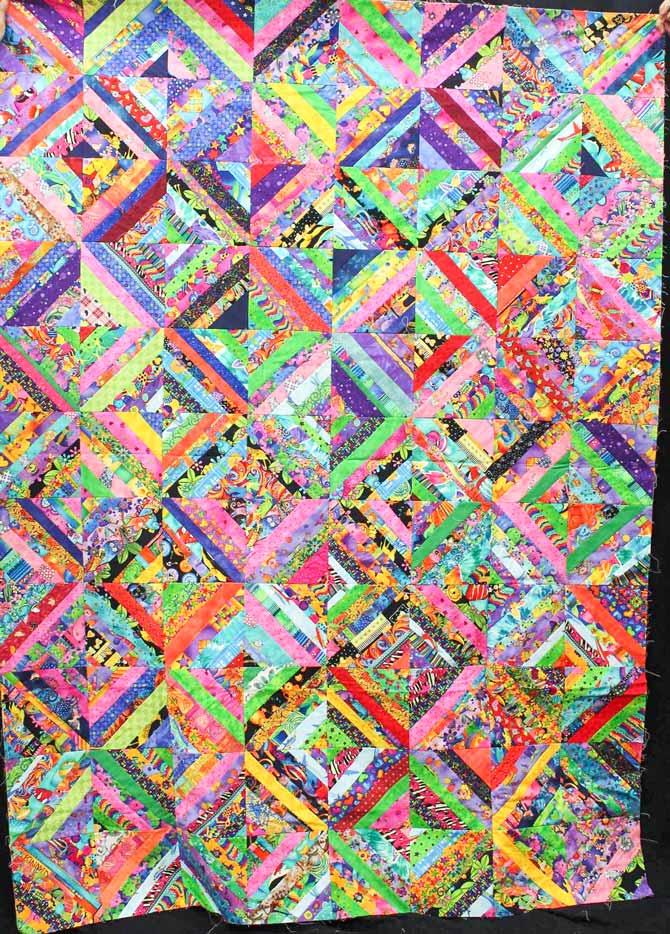 This next quilt was literally saved from the trash. I was the recipient of bags and bags of scraps that people were going to throw out. The initial idea was to use the scraps as filler for pet mats.

However, when I opened some of the bags, I discovered a few pieces that were too large to throw away. I kept those pieces in a basket and then started to make some string pieced blocks. Soon, I had enough to make not one, but two of these quilts. I’m only going to show you one – they both have the same look and feel to them.

Like the one above, I used muslin squares as the foundation. The block size is the same and the quilt is 8 blocks wide by 10 rows long for a finished size of 64″ x 80″. A great lap quilt for an adult. 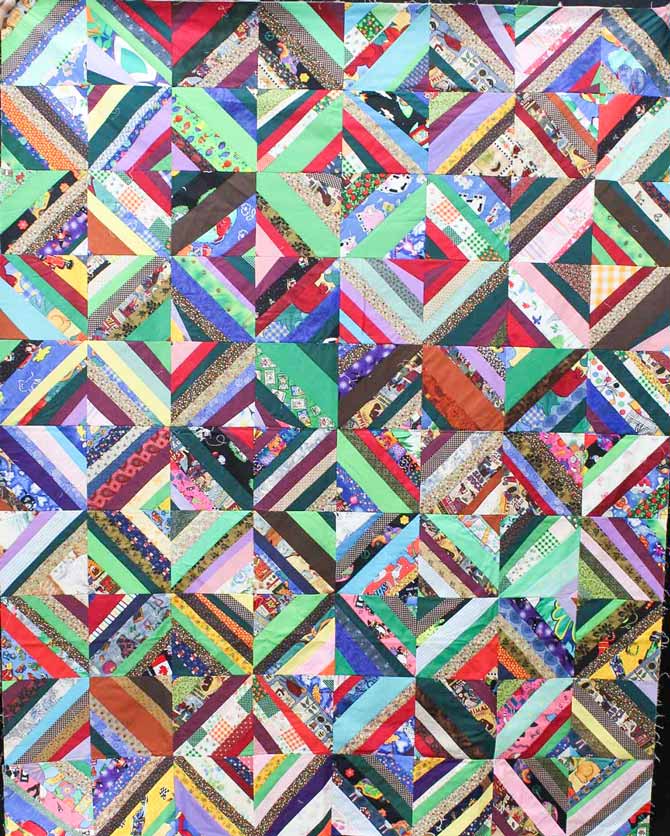 String pieced quilt with an eclectic mix of fabrics

Both of the quilts above have a very eclectic look to them. The strips aren’t the same size and some of them are cut on an angle. The first quilt is more cohesive because the fabrics are all bright. The second one is much more eclectic and contains solids, as well as prints.

If you want something slightly more controlled, you can add a constant fabric in the center of each block. The intention in the blocks below was to use a multi-colored fabric for the center strip (2½”), then pull those colors to use in the other strips, which are all the same width (1¾”).

However, I don’t feel that the fabric used in the center was strong enough to support the bright colors of the other strips. It doesn’t matter, the quilt is going to be amazing when done and I’ve learned another lesson.

I think I get more thrill out of making a quilt and learning something from it than I do from the actual finished product. 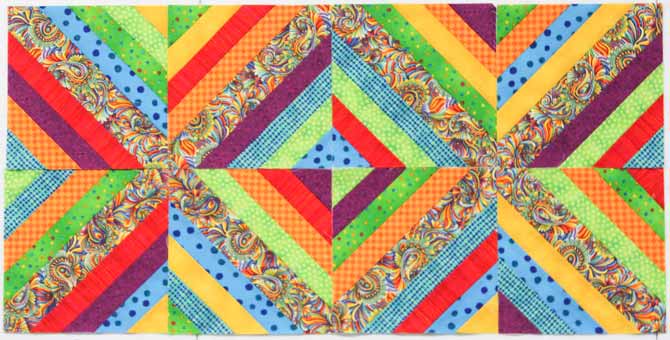 String pieced blocks with a consistent fabric in the center

One thing to consider when using a consistent strip in the center of the block is to get it perfectly lined up so the seams meet at the intersections. It does take a bit of practice and a lot more time. Or you can aim to have it close and be happy with that. 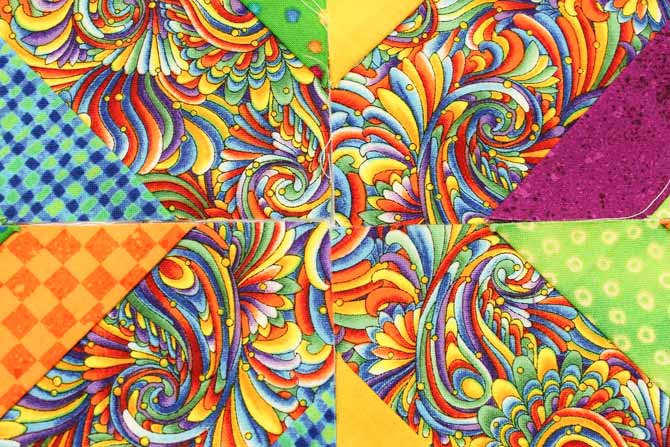 As per yesterday’s post, you now have a selection of strings and a foundation for each block.

Take one of your foundations and two strings. Here’s where you get to set the rules again. Don’t you love that there are no rules to string piecing?

When you’re piecing the squares diagonally, you want to start in the middle.

You can start with one piece of fabric in the middle. This piece can be consistent as per the example above, or it can be a different fabric and different width in each block.

A consistent fabric is used in the center of the blocks

If you’re using the same fabric and the same width for that center strip, you want it to be centered with the diagonal points of the foundation. One way to do that is to draw a line down the middle on the wrong side of the strip and use the lines to match up the center of the strip with the points on the foundation.

A random width strip is placed in the center position

Alternatively, you can start your block with a seam down the middle of the block (more or less) by aligning the first string from corner to corner (beside the points, not covering the points). 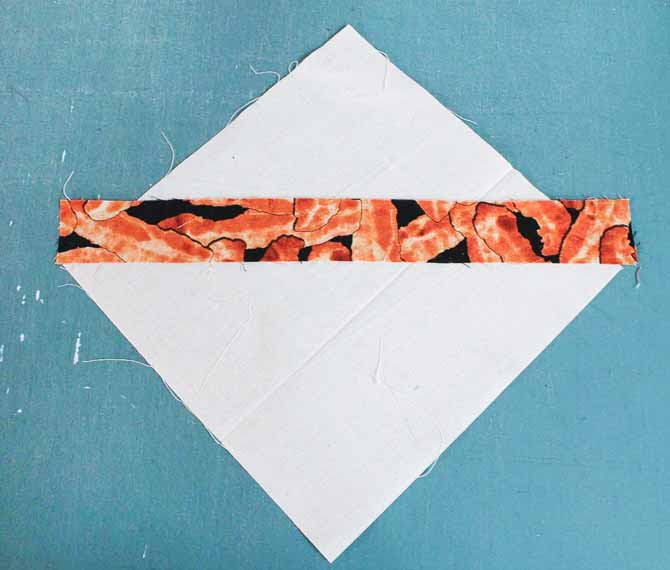 The random width strip is beside the points of the foundation, not covering them

Place the next string face down on either the left or right side of the first strip. 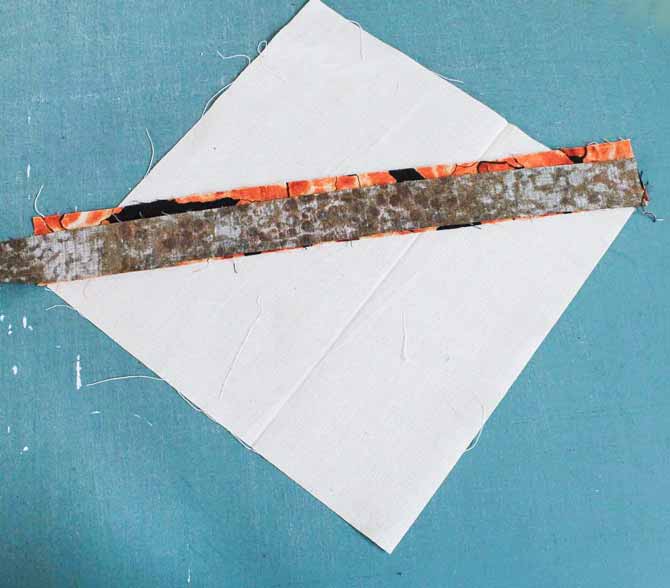 Place the next strip to be sewn right sides together

Using a ¼” seam allowance, sew the two pieces together through the foundation. 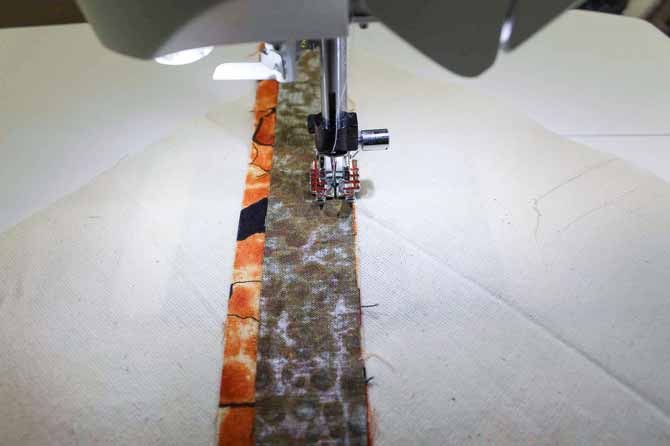 Press away from the center. You can continue until that half of the block is covered or you can add the next piece to the opposite side of the first piece. Continue adding strips until both sides are covered. If my strings are very long, I do cut them off but ONLY after that strip has been pressed away from the center. 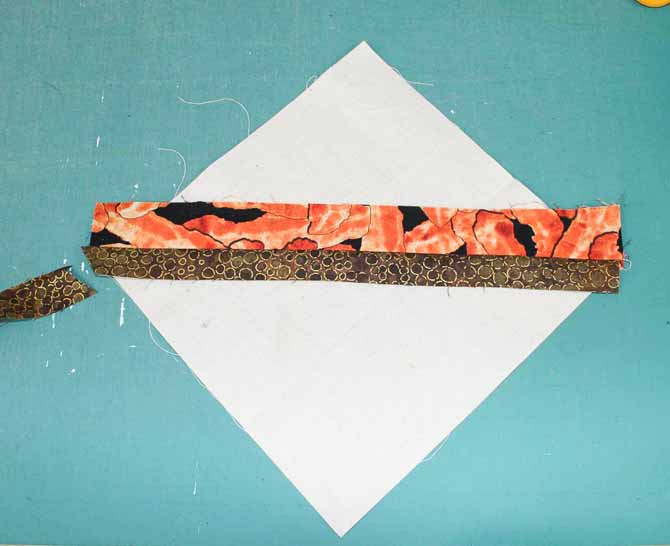 First two strips sewn to the foundation, and roughly trimmed

Once the block is completely covered, trim and repeat until you get the desired number of blocks. I usually work on up to 10 blocks at a time, making sure that I use the longer strings for the widest parts of the blocks and shorter ones on the narrower parts. Again, it all depends on what you have for strings.

If you’re string piecing a triangle, I start at the bottom (widest edge) and work my way to the top. Since there are no rules, you can do it any way you like.

In case you’re wondering why string piecing uses a foundation, it’s very simple. If I were going to piece the square above, how wide does that center strip need to be? How wide should the next piece be? The foundation acts as a visual guide, no measuring. If you don’t use a foundation, you’ll always try to cheat the system and skimp on fabric. Murphy’s law dictates that one piece and it’s always the middle strip will be too short!  It’s just faster to use paper as a guide.

Technically, you could make large pieces of string pieced fabric and then cut your shape, but that is wasteful.

Tips for the sewing machine setup

Now that you know how to string piece blocks, you’ll be looking at your fabric stash and your quilt neighbor’s trash in a whole new light!

The time-saving features on the Husqvarna Viking Opal 690Q make sewing these blocks a breeze. The sky is the limit on how creative you can get with these blocks so why not make a few and send us a picture. We’d love to ooh and aah over your creativity!

Tomorrow, I’m off in a different direction and it’s all about control!

This is part 2 of 5 in this series.
Go back to part 1:  How to make a string quilt block using foundation piecing

Go to part 3: The when, why, and how to use your sewing machine foot pedal

How to make a string quilt block using foundation piecing

The when, why, and how to use your sewing machine foot pedal

Great tips. Straight lines are cool. Just need to figure out how to quit something like this myself.

I’m slowly building my scrap stash for string piecing. Since all the scraps will be from previous quilts I’ve made it’ll be a fun “memory ” type quilt & just for me. Can’t wait to try it.

I am obsessed! This ends up looking so cool!

I love the design of the quilt

I love string piecing. As you can see, my middle name is “Eclectic”! 🙂

I LOVE your middle name! String piece on! Elaine

Anchoring seams on your quilts using the...