A wonderful innovation in design positioning: the Luminaire projector

Hi! Folks… thanks for taking the time to pop in today, as I continue exploring some of the basic-yet-not-so-basic camera features of the Brother Luminaire Innov-is XP1. “Basic-yet-not-so-basic” – sounds contradictory, doesn’t it? But think about it: all this camera stuff (on a sewing machine, no less!) is pretty darn revolutionary, don’t you think? A mere few years ago, that would have fallen into the category of “What will they think of next?” But really, looking at them, weren’t they so very easy to use?

Yesterday, I looked at the Luminaire’s scanner function, and the day before that, setting the design placement by snowman. Today, let’s look at how the built-in projector lets you preview the design right on the project!

Now, before I get started, I wanted to share with you a non-sewing-related project my family has recently been involved in…a few weeks back, we collected a ton of caterpillars (very hungry caterpillars!) and have observed the wondrous process of their metamorphosis into beautiful monarch butterflies. I still have a few chrysalides waiting to eclose (new word of the day?). We’ve been releasing them, of course, but one day I had 25 of them hanging out in my kitchen to dry their wings after emerging!

My inspiration for this project…

So, as you might have guessed, I have butterflies on the brain, and they have inspired today’s project. I found a sentiment online that was just perfect, and a butterfly design in the Luminaire to coordinate. I used the Brother ScanNCut CanvasWorkspace to create a cut file, which I then cut from heat transfer vinyl on my ScanNCut. I heat-pressed my quote onto a tote bag, and now I’m ready to set that off with some embroidery. I hooped stabilizer, and pinned the bag onto that to secure it while I move it around as I work. 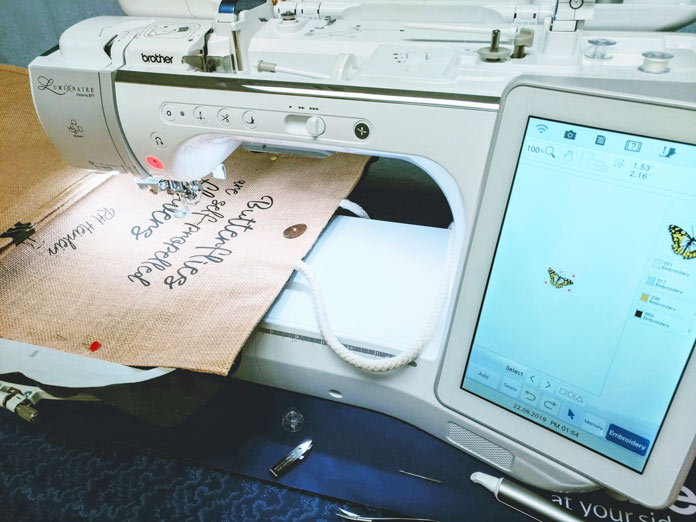 All set up and ready to play!

As you can see, I already selected my design. I then set my color choices on screen, and moved right on to the Embroidery screen. There, I touched the Projector icon, and used the rotate and move tools in the Projector screen to place my design where I wanted it, all the while seeing an image of my design on my fabric. C’mon – you gotta admit that’s pretty awesome!

You can see the projection area on the screen in the pics below; because the projector is so close to my fabric, the area is a compact 3″ x 5″, but I can drag it around to follow my design. 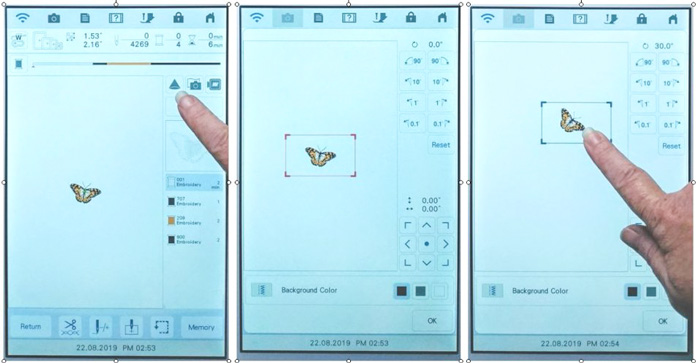 Enough on the screen, I’m sure you’re dying to see just what shows up on the fabric. Take a look at this – I’ve rotated and moved my design, and yes, moved the projection so I can decide exactly where I think this design will look best: 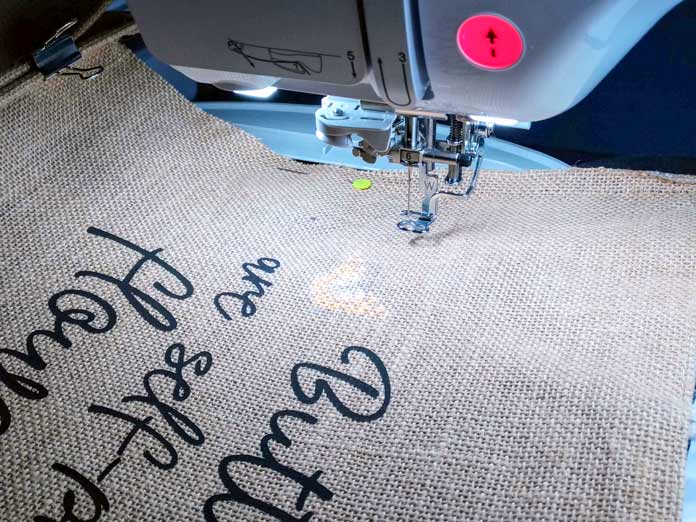 No more settling for “close enough”, when you have perfect preview capabilities!

To complete my project, I repeated those steps to add two more butterflies to my tote, returning to the Edit screen to play with size – after all, no two butterflies are alike, right? I messed around with their position until I was really happy with what I saw, and then stitched. I’ve said it before, and I’ll say it again: Easy-peasy!

All there is to do now is stitch up the side seams, and I’ll have a new accessory to show off: 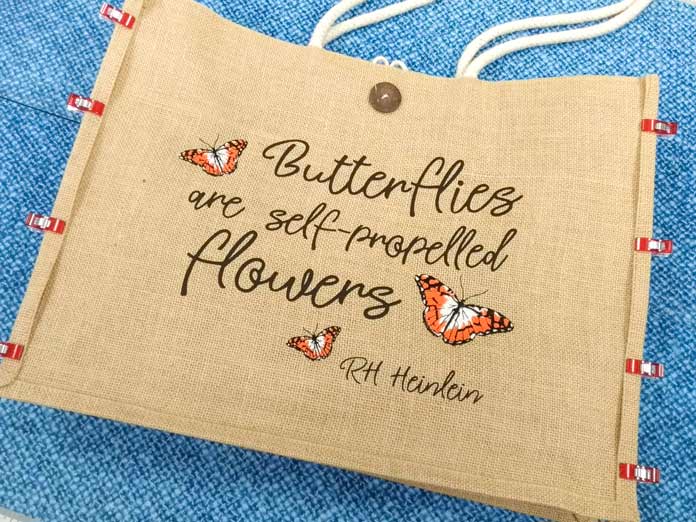 My almost-finished tote, with butterflies perfectly placed a la projector!

So what do you think – will the projector become your new favorite feature? It’s a tough choice, with so many convenient innovations to choose from. But considering this one in particular, it’s easy to see why Brother named this machine the Luminaire, meaning light.

And of course, you know what’s coming… I have another oh-so-fantastic feature on my list to show you, but it’ll have to wait for tomorrow. I hope you’ll return then to see the Pattern Connection By Camera feature. It’s a mouthful to say, I know, but it’s practically easier to use than it is to say! And it’s just another example of how Brother (successfully) endeavors to simplify challenging embroidery tasks.

This is part 3 of 5 in this series.
Go back to part 2: Design positioning by scanning with the Brother Luminaire

Go to part 4: Pattern Connection By Camera on the Brother Luminaire

HI Liana,
Greetings
I have bought a brother Innov BP 3600 a few months back. It also has ‘my design centre’ as in Luminaire. I would like to know if you offer in-person class. Your articles have been very helpful. Thank you.

Hi, Vineeta – I am truly thrilled that you have found these articles helpful, and very flattered that they have reached such a distant audience! I do indeed teach in-person classes. After reading your message, I had to Google the model number, as I haven’t heard of it before. Since it is a model sold in India, I will make the assumption that you live there. Are you planning to visit Canada? It would not be the first time I have taught visitors from so far away. If you are indeed planning a visit to my area (near Toronto, Ontario), I would be delighted to arrange classes with you.

Wow, 25 butterflies hanging out in your kitchen to dry their wings after emerging – that’s amazing.
I’ve looked and looked at these embroidery machines but honestly I don’t think I could use one successfully – too much technique for me I believe. I’ve just bought myself a serger and haven’t touched it yet and it came 4 days ago! It all seems so complicated and before I even start I have to watch 2 CDs. Now, can I get them to work in my CD/DVD player I wonder (had that for 7 yrs and not used it once, there’s so much to watch on Netflix that I haven’t needed to) . BTW that bag looks marvellous with the butterflies on it.

You’re right, Elizabeth – seeing that much tiny life transform and prevail is nothing short of miraculous!
As to the embroidery machines – and your serger, no less – find a local store that offers good support and lessons and sign up for some how-to-use-your-serger classes to start with. A serger offers such a professional finish that it’s a shame not to use it. Videos are ok if you simply can’t find another resource, but nothing beats an in-person class!(BTW, the DVD that came with your serger is probably meant for your computer, not your CD/DVD player, so that might make it easier). And then, once you’ve tackled your serger, see if that dealer offers a try-before-you-buy embroidery class. You’ll be hooked! There are many, many suitable machines out there for a beginner, too; no need to invest in the top right off the hop.
And thanks for you kind words about the bag, I’m pretty thrilled myself with the result…