Did you know that embroidery machines were introduced to the home-sewing market in the early 1990s? I worked in my Mom’s sewing machine dealership way back then, and I remember the hullabaloo of their introductions. Brother’s first embroidery machine to hit the market was the PC-7000. We had this new toy, and most of us hadn’t a clue what to do with it! Do any of you remember those days?

Now we have the Brother Luminaire Innov-is XP1, or the Luminaire… and all I can say is, “We’ve come a long way, Baby!”. Ok, that’s not all I can say, LOL; anyone who knows me knows I can go on and on about these toys and how cool they are. But I’m also guessing that’s why you’re here, right? How did you like what we played with yesterday, the ability to turn a simple outline into a candlewicking design? Neat huh? But I promised a bit of history…

In 1995, about the time new embroiderers figured out that they wanted to be able to make their own designs, Brother came out with the PE Scan. That was a nifty contraption, and with it you could slide the hand-held scanner down a drawn or printed image that was clipped into the lid of the scanner cover, and like magic, it would convert the scanned image into stitches. Though cutting-edge technology at the time, it even offered some very primitive editing tools carried out on a glorified calculator screen. You saved the design to an embroidery card to use in the embroidery machine. That beastie looked like this: 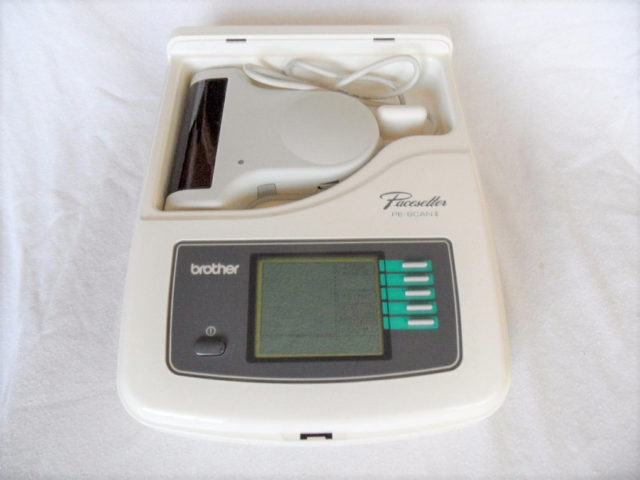 Circa 1995, this PE Scan auto-digitized embroidery from images it scanned.

And now… there are better scanners, better processors, and better screens – all built into embroidery machines! My Design Center offers so much more designing power than those tools of old. But as a nod to those tools of old, I’m going to use some of them here. At the time the PE Scan was new and exciting, Brother published a handful of Scanbooks, collections of scannable clip art created with embroidery in mind. I still have all my old ones, and you can see they featured varying themes: 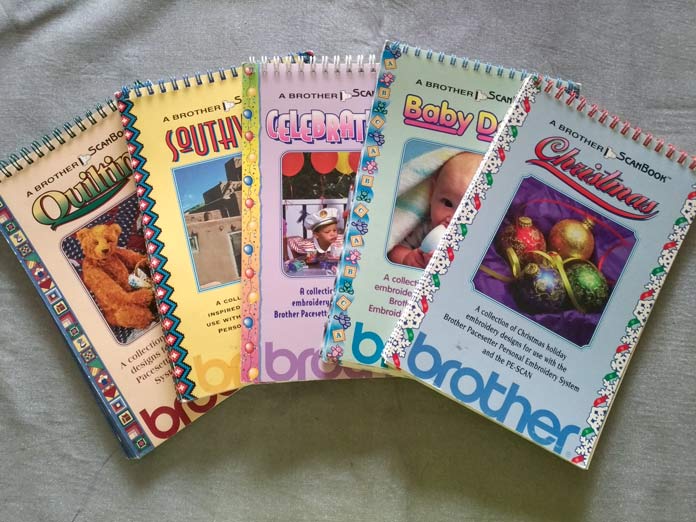 My collection of Brother Scanbooks, originally intended for use with the PE Scan.

Because I think of all these embroidery-machine innovations as gifts, I chose the wrapped present clipart, and have fastened it to the scanning frame with the provided magnets. (I didn’t want to remove the page from the Scanbook, so I removed the needle and presser foot so they couldn’t hit the spiral binding while scanning. For a single sheet of paper, that wouldn’t be necessary.) With Brother’s permission, you may download the same page I’m using so you can follow along… 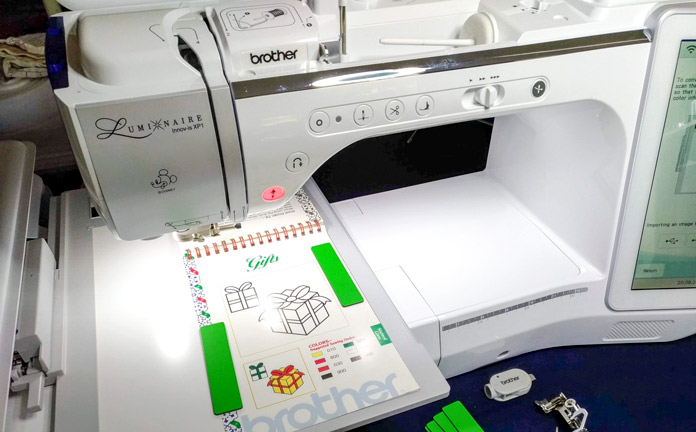 Open My Design Center, touch the Scan key (the leaf) at the top of the screen, then Line Image, like yesterday. Only this time, instead of choosing a file, I’ll touch the Scan button and let the Luminaire do its thing. Once it’s scanned and has recognized the image, drag the corner cropping arrows to isolate just the parts of the picture wanted. Crop out as much of the extraneous scan as you can; any bits you can’t eliminate can be erased in the editing steps, comin’ up. Touch OK, then Set. 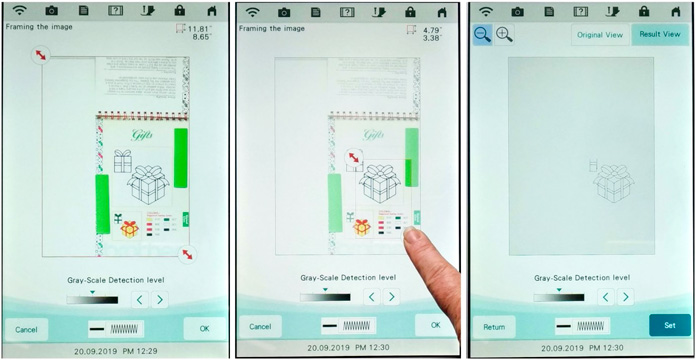 Scanning and setting an image to auto-digitize in My Design Center.

The first thing I want to do is hide the scanned image; it’s no longer needed. Up at the top of the screen is a dimming control (light leaf to dark leaf); touch the light leaf until the picture disappears, leaving only the lines My Design Center has converted. And it looks pretty good! I need to get rid of the remnants of the other present, and to do that I’ll zoom in: touch the 100% button near the upper left and choose 400%. Then touch the Hand icon beside it to drag the present more fully into the working area. 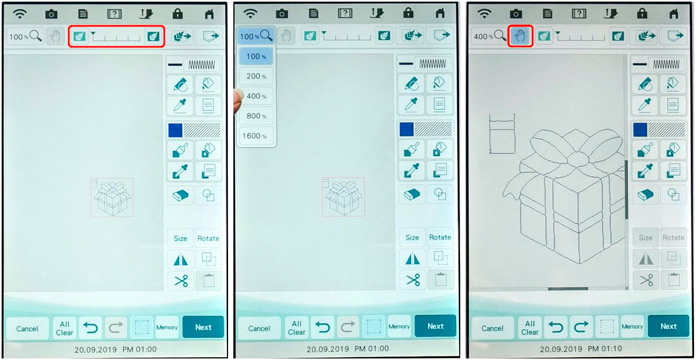 Dim the original scan, zoom in close and drag the design to the middle of the screen…

So far, pretty easy, right? Now touch the eraser tool and, using the default eraser size, “rub out” the bits and pieces I don’t want by dragging my finger across them on screen. Perfect! Now move the present to see all of it on screen – use that hand tool again.

Now, if you were with me for the last couple of days, this gets even easier, because I’ve done this before: touch the Region bucket tool, then its Properties, and choose the color for the present. Then simply touch each area I want filled with that color. If I hit the wrong spot, just touch undo. Change colors as needed until all the regions are filled. 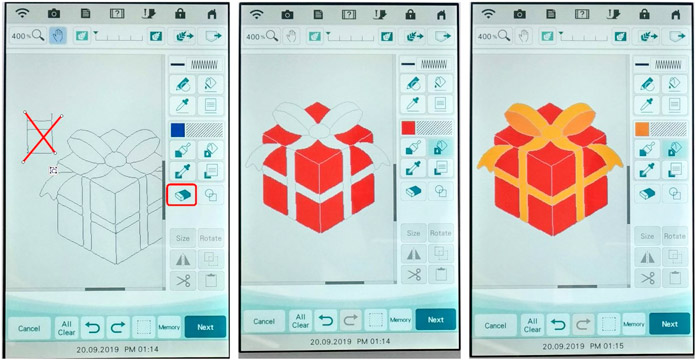 Erase the bits from the “other” present, then start dropping in color where wanted…

Now for the outline. That’s automatically set as a satin stitch, so if I want to change it I can; just touch the Line bucket, set the Properties, and touch the present’s outline (it’s all one piece). I don’t want to change it, so just touch Next, and the stitches will generate. And it looks so small! But it’ll actually stitch out the exact size I scanned, unless I choose to resize it in Embroidery Edit, later. I can zoom in a bit, here – just 200%, or I can preview it big enough to fill the screen: touch the preview button up top, and then the plus zoom tool. What do you think? It looks okay, for so little effort! Close the preview, and now, if I really want to, I can use the arrow keys to cycle through the bits and pieces of this design and make changes to stitch angle, density, pull compensation, and underlay (all the tools on the right-hand side of the screen). In the interests of keeping it simple, I’ll just stitch it with all the automatic settings to see what I get. Go ahead and Set it. 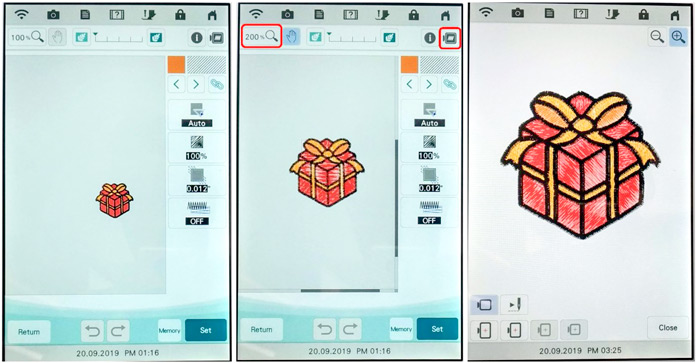 I have now stitched this out, and for a design that looked ‘okay’ on screen, I’m quite pleased with the actual stitchout. I might have been able to do better in the software, but I sure couldn’t have done it faster, nor could I have done it this well this fast. What do you think? 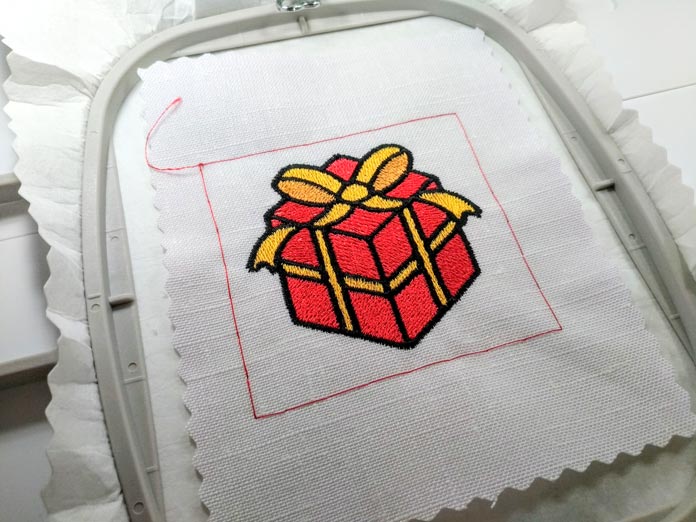 Less than 10 minutes to create, a few minutes longer to stitch, and doesn’t it look great?

So… back to what I said at the beginning, “We’ve come a long way!” From plugging in little cards with limited design selections to being able to download from myriads of design choices to using the sewing machine to scan in a picture, convert it to stitches, and embroider out my own design, wow! Just… wow! Which of course, leads to the age-old question, “What will they think of next?” Fun to ponder, but without a crystal ball, I couldn’t even begin to fathom!

What I can fathom, though, is that the tools in My Design Center must let me draw something of my own, right? I mean, I played with the magic-wand-like tools, and they worked like a charm (ha! get it?), but what if I want to completely draw something on screen from scratch? Well… that’s tomorrow’s game plan, so tune in then so we can play with the drawing tools of My Design Center on the Luminaire together. See you tomorrow!

This is part 4 of 5 in this series.
Go back to part 3: Brother Luminaire, My Design Center, and a candlewicking memory…

Brother Luminaire, My Design Center, and a candlewicking memory…

It is amazing what some of these embroidery machines can do!

It truly is, Cecelia. And to have watched home embroidery capabilities grow over the last 30 years has been nothing short of an adventure!

Thanks, Chris! It was fun, getting to play with this machine! And I finally got the time to play with My Design Center, an area I truly hadn’t had time to explore before. I still love my software, but for built in convenience, well, what will they think of next, LOL!