Today’s the day! Pattern Connection By Camera on the Brother Luminaire Innov-is XP1, herein referred to as the Luminaire (doesn’t that make me sound official?). You know, when I had initially set up my outline of what Luminaire embroidery features to show off this week, in my head I had a progression of the camera-based tools, starting from easiest to hardest. So I sequenced the Snowman Positioning first, the Scanner Function second, and yesterday we saw how easy the Projector made setup. Now, having not played with Pattern Connection by Camera in a while, I actually thought scheduling it as the fourth in this mini-series was suitable for its ‘level of difficulty’.

Not! While reacquainting myself with the process, I rediscovered just how easy it is – so easy I could have put it in at the beginning. However, I do feel that the last couple of posts introduced some of the individual steps involved, so it’s all good.

After stabilizing an oblong strip of fabric and marking my start point, I clamped it into the large Brother Border Frame and set it onto the machine. Then I set up my design, and of course I played with it. That’s what all the toys are for! I resized it slightly so that 4 repeats will fit down my fabric (yeah, had to some math) and changed the colors to suit my purpose. And – this is important, because I changed the original design: save the changes! (Ask me how I know, LOL.) I’m now ready to progress into the Embroidery screen. 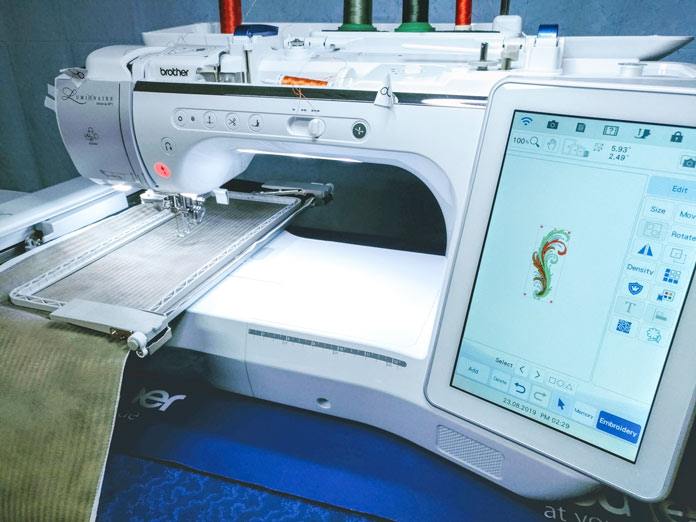 All set up and ready to go!

To perfectly place the first design (after all, that one’s on me) I touched the Trial button. Not only will this tool let me trace the design boundaries, it’ll also let me check my design position by referencing any one of the 9 positions you can see in the middle picture, below. After selecting the top center position, I exited this screen and used the regular move tool to position my needle directly over my start mark. In the last picture, you can see me pointing at the needle position drop light… 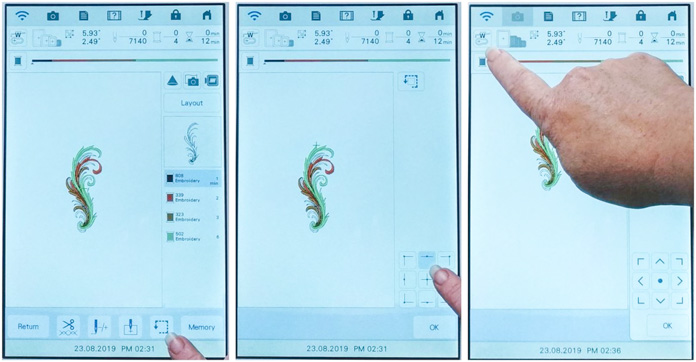 There’s no end to the helpful positioning tools on the Luminaire!

What’s the drop light, you say? Take a look at the next picture; turning on the drop light projects a green cross-hair onto my fabric that I can precisely match up to my own marking. No more needle-up/needle down messin’ about! 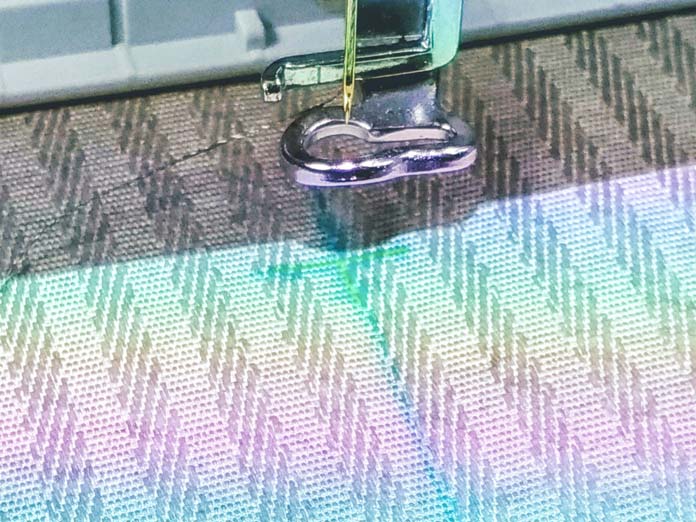 Can you see the green crosshairs along my drawn lines?

Once this first design was positioned exactly where I wanted it, I touched the Pattern Connection By Camera button to turn on the function, and stitched my first repeat. 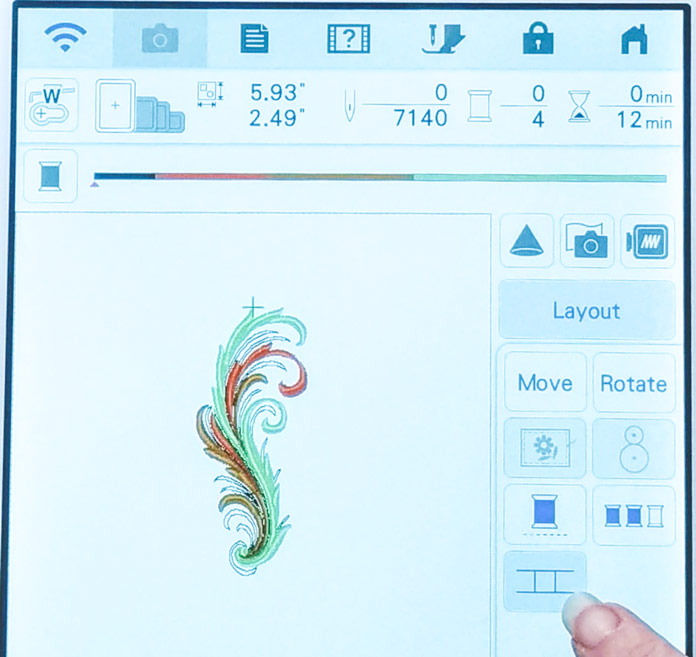 When it’s finished, a series of messages pop up, providing step-by-step guidance through the process. OK, I want to connect the next pattern, OK, I won’t remove the material from the frame. And now it wants me to select the next pattern and here’s why I said to save the design if you made any changes – you don’t want to do the same edits over and over. But – and how cool is this – I can also pick a different design; you’re not restricted to repeating the same one! Once it is selected and set, touch the Pattern Connect icon, and choose the layout options. In this case, I want to place the new pattern directly below the first, though there are other choices. Let’s keep it straightforward for the first try, and touch OK. 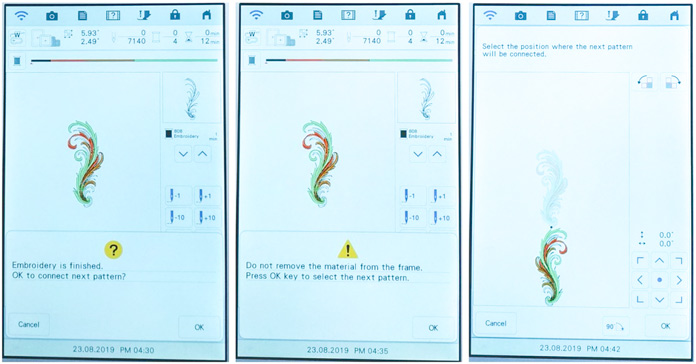 Step-by-step guidance through the process is very user friendly!

Next, I’m prompted to place a snowman sticker on the fabric, directly under its projection. After doing that, and pressing Scan on the screen, I get to do it again with a second snowman. 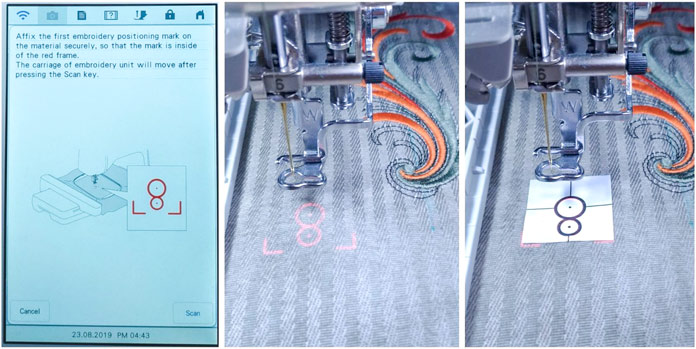 Yet another application that makes use of the projection feature.

This time after pressing Scan, the Luminaire does its camera magic to memorize placement, spacing and angle and – again – prompts for the next step: to re-hoop the fabric so the stickers are well within the hoop’s embroidery area. I did that – and even hooped a little crooked, and when I hit Scan for the final time, the Luminairefigured it all out and made it perfect! I even tried hooping so the design would be outside of the hoop area and it made me try again! The screen then prompted me to remove the stickers and stitch. After I stitched it, I repeated this two more times to get my four repeats and now, look at this – perfection! 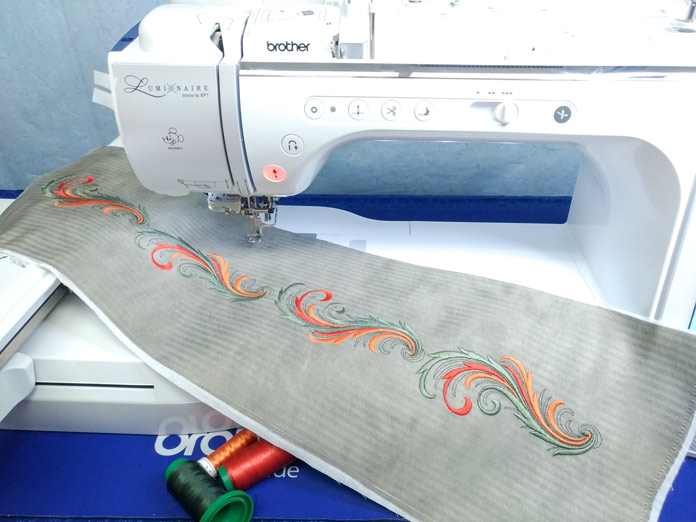 This built-in design from Zundt looks awesome as a repeated element!

Pattern Connection By Camera appears to have a lot of steps, but most of them are just pushing the OK button on screen. And not having to worry about hooping perfectly certainly makes up for that!

Now all that’s left to do is decide what to do with my panel… and I have a project in mind for that. Hmmm – I wonder if I can make it coordinate with tomorrow’s feature. Maybe… just maybe!

I have one last cool tool on my list for this series, and it’s similar to this one – that’s why my idea might work… so I hope you’ll pop back in tomorrow to play with the Quilting Border Patterns in the Brother Luminaire.

This is part 4 of 5 in this series.
Go back to part 3: A wonderful innovation in design positioning: the Luminaire projector

Go to part 5: Playing with the Quilting Border Patterns in the Brother Luminaire

A wonderful innovation in design positioning: the Luminaire projector

Playing with the Quilting Border Patterns in the Brother Luminaire

Thanks, Cecelia – this machine makes it surprisingly easy to achieve such precise results.