Hey, Everyone – I’m excited to explore some more of the Brother Luminaire Innov-is XP1 embroidery toys. Last month when I started playing with some of the very cool embroidery features of the Luminaire, I notably left out any use of the camera functions. But you may also recall me mentioning “Method and Madness” or was it “Madness and Method”? So, this week’s method is to showcase the camera options as applied to embroidery. Over each of the next five days, I’ll experiment with a different camera application. Ready to play along?

Today I’ll take a look at automatic embroidery positioning. Did you even know there was such a thing? It’s a really helpful feature that can make the hooping struggle a thing of the past. Don’t get me wrong – good hooping skills are still important – but I’m referring specifically to the relationship between hooping and design placement.

Now, I’ll admit to being ‘old-school’; I like my hoop templates, and I’ve gotten really good at using them to hoop accurately; over the past 20-something years I’ve had tons of practice (and it did take practice). Occasionally, though, I still struggle with the odd project, for example – the fabric keeps shifting while I’m hooping and my placement marks end up crooked or offset.

Brother has an awesome solution for that: Snowmen. Well, they’re officially called Embroidery Positioning Stickers, but the nickname Snowmen has stuck (no pun intended, but hey, I’ll take a giggle where I can get it), and it’s easy to see why. This is what they look like: 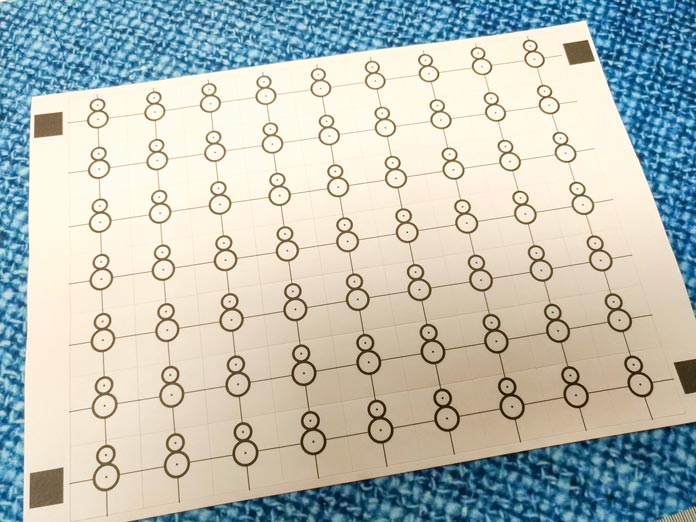 Embroidery Positioning Stickers (aka Snowmen) for the Brother “camera machines”.

So, you know how the facial recognition ‘thingie’ works on your phone camera? Me either. But I imagine the Luminaire’s snowman-seeking camera works much the same way: it’s programmed to recognize specific features (in this case, the snowman shape with crosshairs and a “belly-button” target). It finds this, registers its position and angle in the hoop, and moves the selected design to match. Sounds complicated? It probably was to the programmers, but for us to use, it’s easy-peasy!

For the next picture, I have hooped my stabilized fabric and adhered the Embroidery Positioning Sticker with the crosshairs exactly where I want my design center. And I do mean exactly…but oops, I hooped the fabric crooked. Yeah, it’s a small enough piece I could have easily hooped it straight the first time, but hey – work with me here 😊. I want to show how magical this function is… 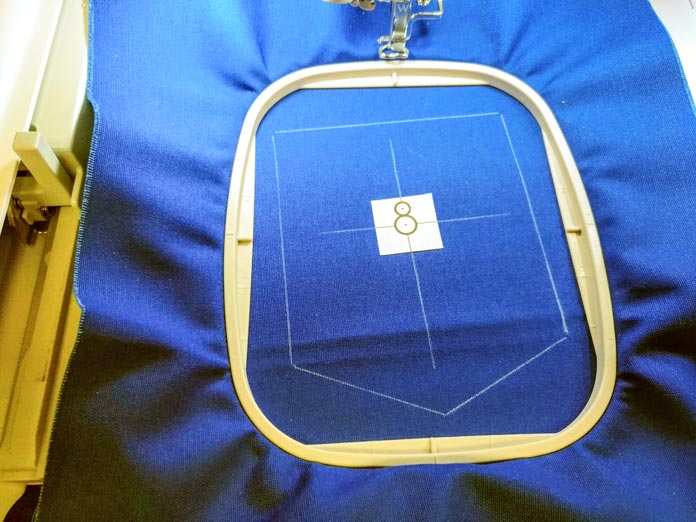 Here’s my fabric, hooped crooked. Is that an uh-oh? Nope!

On the Embroidery screen, touch Layout, then the Snowman icon: 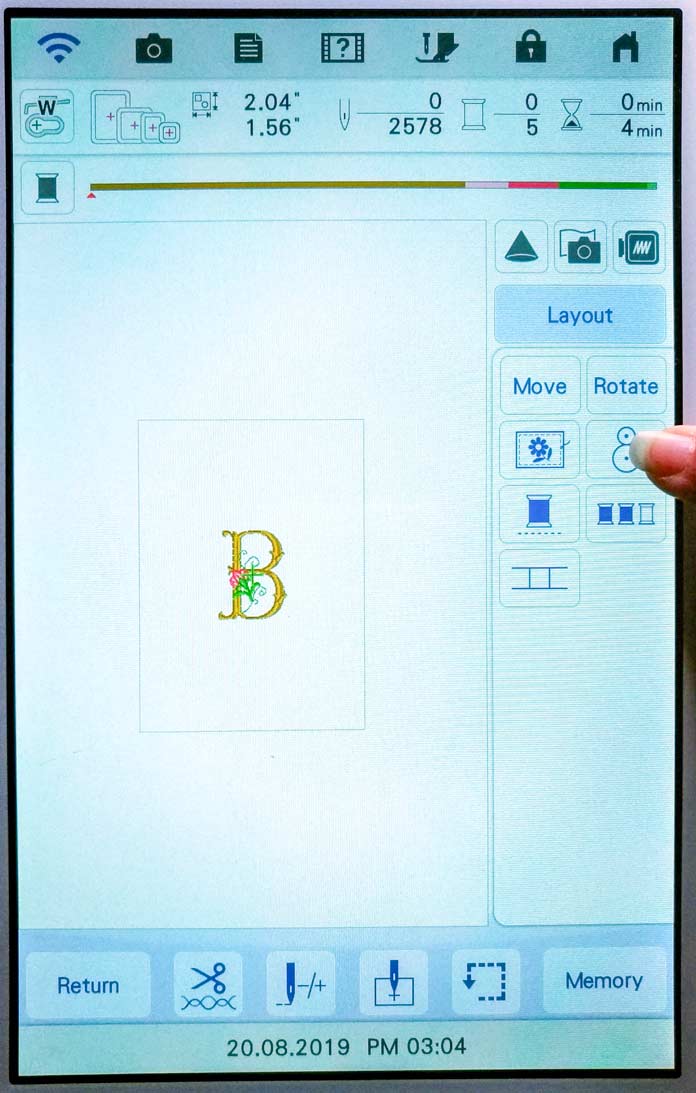 Touch OK to the message about reverting the design to the original position, and now the magic begins: I can choose which boundary of the design I wish to reference for alignment. There are nine choices: any corner, top or bottom center, left or right middles, or design center. Since I placed my snowman in the center, that’s the reference I want the Luminaire to use; with it highlighted, touch the Abracadabra button – I mean the Scan icon. 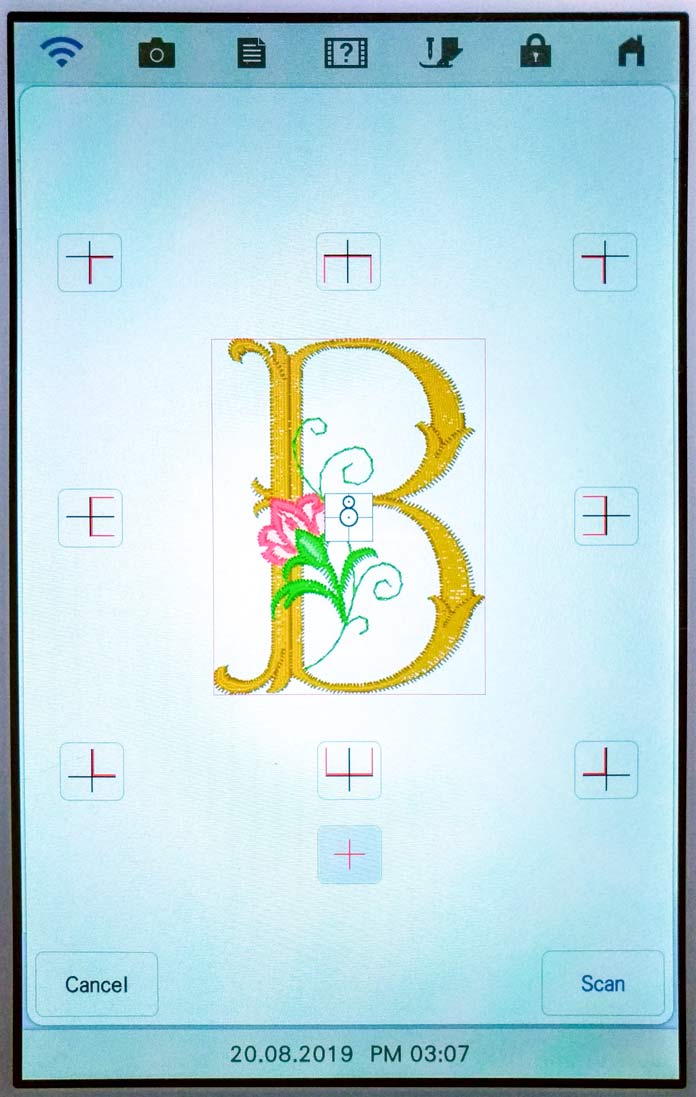 The Luminaire warns me the hoop will move (OK), and the scanner function engages, sliding the hoop around as the camera looks for the precise placement of the snowman. As soon as it recognizes it, it adjusts the design’s position and angle to match it exactly. You can see my design has moved and rotated on screen. It’s just perfect! 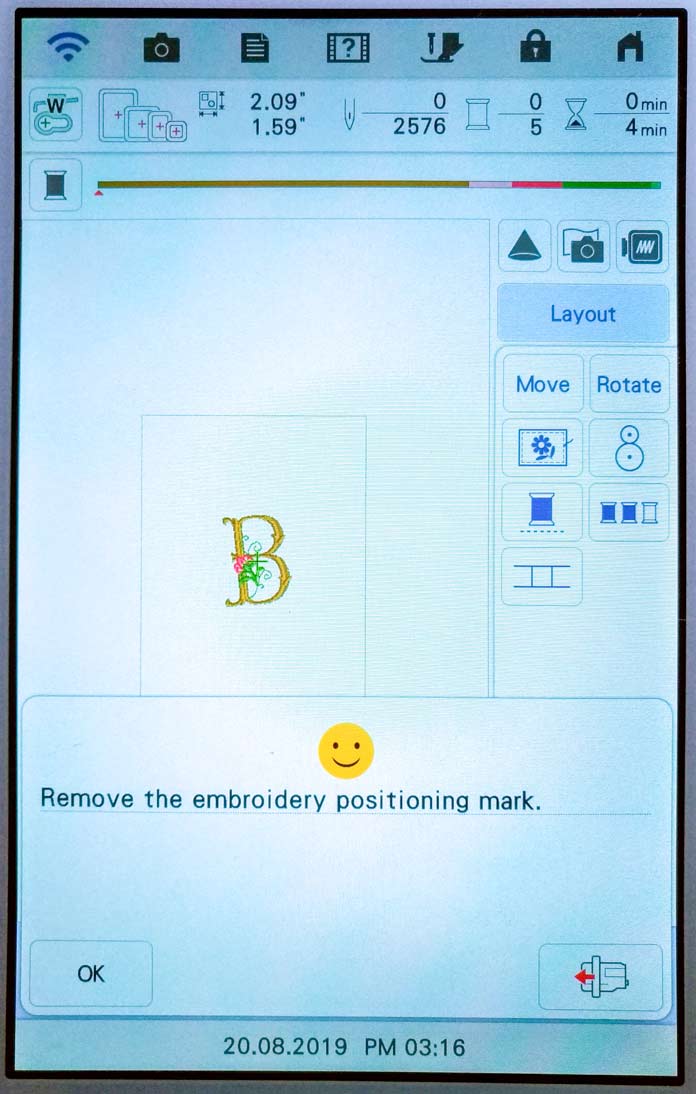 Done scanning and look – the design has been moved and rotated!

Seems almost too easy, doesn’t it? But then again – why would you want it to be difficult? And I’ll let you in on a little side-experiment: even when I placed the snowman on its side or upside-down, it worked perfectly. The only time it wouldn’t reposition the design was when I stuck the snowman too close to the hoop’s embroidery boundary – and that makes sense, because the design would have been placed outside of the stitching area. This machine is too smart to let me do that!

Are you anxious to see the finished results? Check this out: 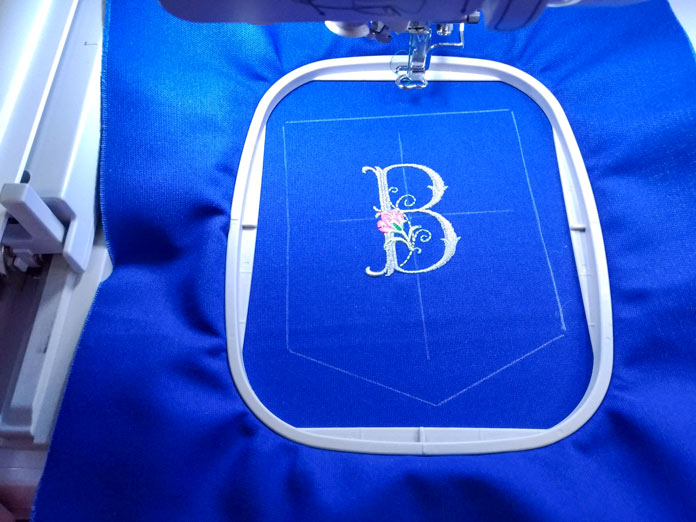 The embroidery design stitched out perfectly and precisely where I wanted it!

In the above pic, I really didn’t need the center cross-hairs; the Embroidery Positioning Sticker would have done fine on its own, But I like marking my placement (makes placing the snowman more accurate), and I wanted you to see (once the sticker was gone and the design stitched) just how accurate the positioning stickers are. What do you think? Don’t you just love how easy that was?

If you liked that one, the next feature will also be a treat! I invite you to return tomorrow where I’ll be exploring a different aspect of design positioning by scanning with the Brother Luminaire. And…it’s as easy as this, so I just know you’re going to love it!

Go to part 2: Design positioning by scanning with the Brother Luminaire

A perfect picnic quilt is made of a simple quilt design

I would love to have this on my machine.

Wouldn’t we all, Monica, wouldn’t we all, LOL! I think sometimes the two biggest challenges in embroidery are the stabilizing and the design positioning. The Snowman can sure that the challenge out of the latter!

Brother does have a lovely selection of designs, don’t they!

This is a GREAT feature!

It sure is! I love the convenience of it – it makes simple positioning even simpler! I hope you also get to check out the other methods of design placement; no matter the application, Brother seems to have a perfect solution!

Its’ always great on Quiltsocial to be introduced to different sewing machines to see what features they have.

Hi, Diane – QUILTsocial does offer a great rounding of machines, features, technique and inspiration – it’s an honour to be included in the blogging team!