Exploring the vast embroidery capabilities of the Brother Luminaire XP1

When asked to write about embroidery on the Brother Luminaire Innov-is XP1 (aka the Luminaire), my first thought was, “Um…wanna narrow that topic down a bit?” Fortunately, or unfortunately, that task was left to me. That’s a good thing, because I’m kinda a bit of a control freak, so getting to decide what to play with and discuss is right up my alley. But the challenge, came in that very “thing”: I know the Luminaire does so much – so how do I distill its potential into anything less lengthy than an epic novel? With pictures?

If you’re a long-time reader of QUILTsocial and read my posts on the Brother NQ3500D a few years back, you might recall I like to “start at the very beginning – a very good place to start!”. And now that you’re humming along with me…

According to the brochure and spec sheet, The Brother Luminaire boasts a long list of what promises to be some very cool features – some of which gave me pause. I remember thinking, “But what does that mean?”. Over the next few days, I’ll review and explore them together with you and really get to know this sewing, quilting, and embroidery machine – at least the embroidery part of it, and especially those “mysterious” features. So let’s get set up and start exploring this baby, step-by-step…

The Luminaire is one BIG deal!

My first impression of the Luminaire is it’s big and bold and bright, and so is the touchscreen! Let’s tackle that one first: diagonally, it measures 10.1” (5.3” x 8.5”) and its high-definition display supports the kind of sliding, swiping, scrolling, and pinching we do with our phones. Love it! It’s crystal clear and easy on the eyes. All of those add up to “a really good thing”, because the instruction manuals are all built-into the machine and you can zoom in for close-ups if you like (if you still prefer hard copies, you can download printable manuals from Brother’s support pages).

Also built-in to the Luminaire are over 30 video tutorials! I’m a monkey-see, monkey-do learner, so these videos are great! In poking around onscreen and playing, I’ve discovered (ask me how) that this new screen likes your finger pad (or the included soft-tipped-stylus), but not your fingernail. 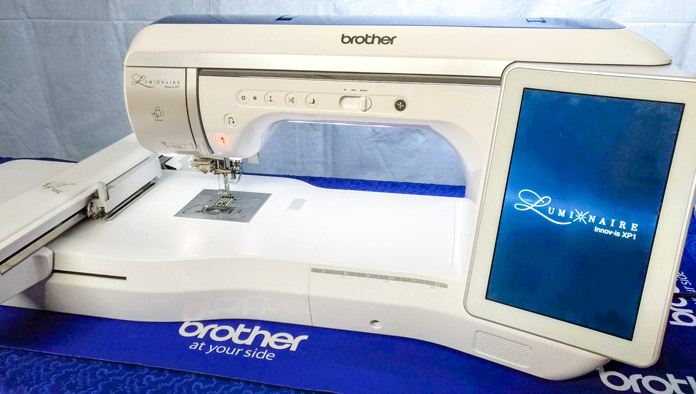 See how big the Luminaire is? I measured 37″ left to right! And oh – that screen!

The needle-to-body measurement of the Luminaire is over 13”! Of course, that’s why it can support Brother’s largest embroidery hoop to date: 10⅝” x 16”. And by the way, this new, extra-large hoop has grippy surfaces on the inner frame to hold onto your fabric, and a spring lever on the clamp to make hooping and unhooping easier. Speaking of hoops, the Luminaire comes with four: 4” x 4”, 5” x 7”, 9½” x 9½”, and the biggie, 10⅝” x 16”. I’ve stabilized and hooped some fabric in the 9½” square hoop (perfect for quilters!) and slid it onto the machine – just slide and latch. The Luminaire even recognizes the hoop size. I just love this foolproof system! 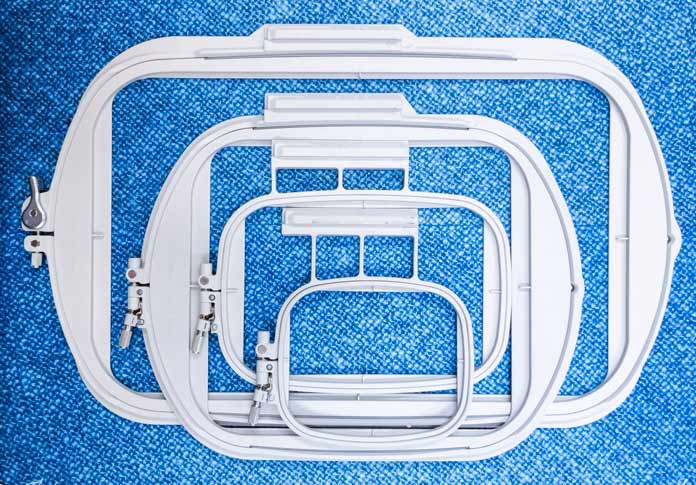 The picture below shows what I meant by bright – even in a dark room, the 13” surround lighting (8 LEDs) lights up the machine bed so it’s easy to read the spec sheet. Being able to see the finest detail while I’m working is very important to me. I don’t know about you but my eyes aren’t getting any better! 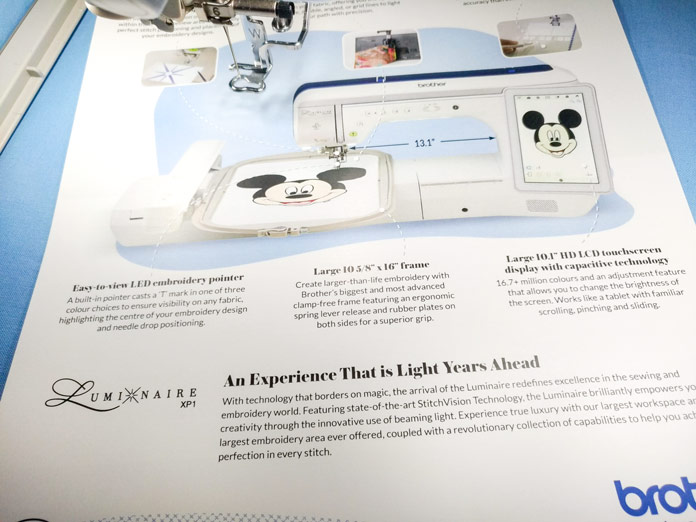 Even with room lights off, the Luminaire’s lighting lights up your project as brightly as it does this spec sheet!

There’s a grand total of 1157 embroidery designs built-in to this baby, 192 of them featuring Disney® and Pixar® characters. I love browsing through the Design Guides (the catalog of the Luminaire’s built-in patterns) and imagining all the projects I wish I had time to create! Wanna sneak peek? You can download these guide and manuals here. You’ll find everything from floral, children’s designs, animals, sports, steampunk, medallions, quilting patterns, to tattoo art and more. Go ahead, check them out – I can almost hear your oohs and ahhs already! 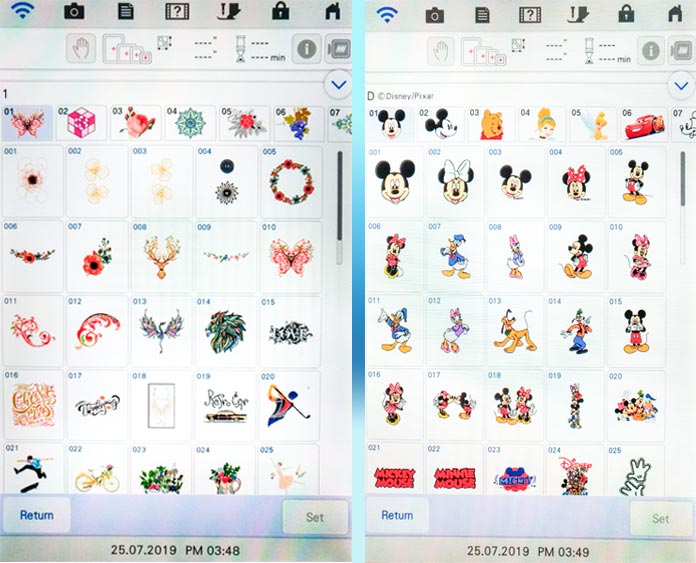 Shown here are just two of many design menu screens on the Brother Luminaire.

I got a wonderful surprise when I opened the top cover of the Luminaire: the lid flipped over completely towards the back, forming a tray that’s perfect to hold threads, bobbins, etc at the ready. And even better, it has a thread stand that secures magnetically into the cover – that’s so cool! It took me a minute to be able to thread the top guides smoothly (I’m used to a simple drop-in, or left-to-right threading) and these go right-to-left. Threading the numbered and diagrammed needle path is pretty much the same as on other Brother machines, and you gotta love the totally automatic needle threader! Just push a button and voilà! Done! 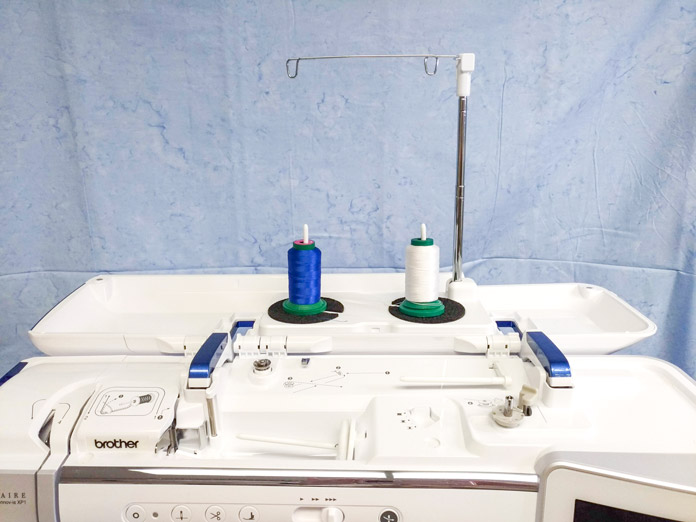 The Luminaire’s with its top cover open and thread stand in place.

As to bobbin winding, you can flick a switch to set any one of 5 different fill levels, which I can see working really well for some sewing or embellishing projects; but for embroidery, I’m just happy to fill ‘er up – at medium fill speed, of course, which is controllable on-screen. And truth be told, I usually fill up a whole bunch of them to keep on hand, don’t you? 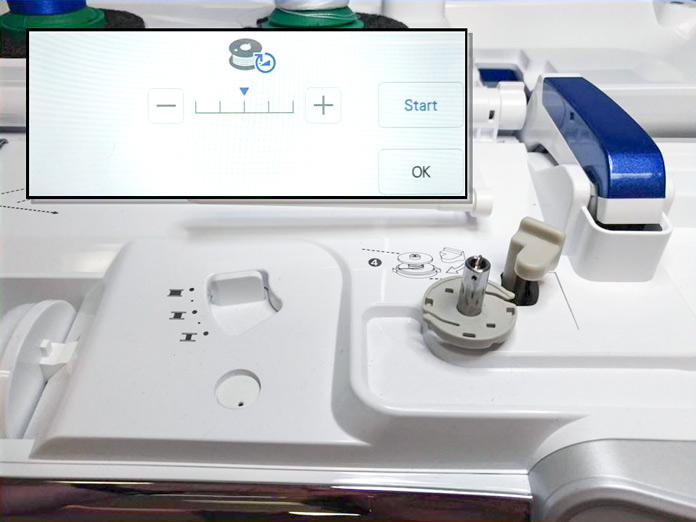 So I’ve picked a built-in design from the Design Guide to try out. Stabilized fabric is in the hoop, the Luminaire is threaded top and bobbin. We’re just about ready to touch the green GO button and let the machine start workin’ its magic: Ready, set… 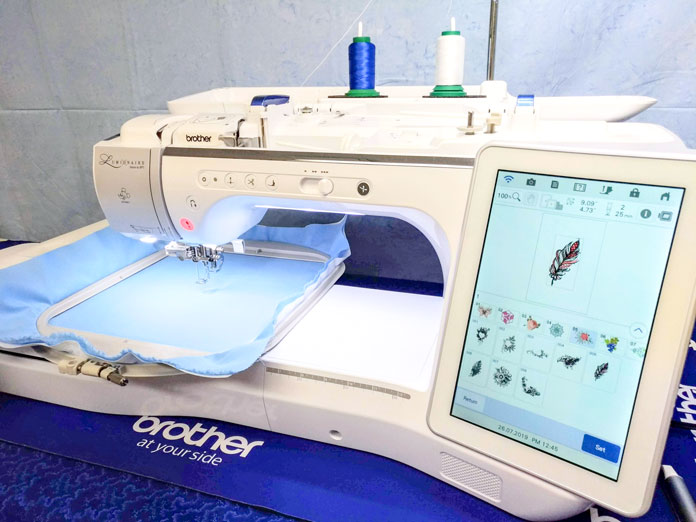 The Brother Luminaire threaded and – almost – ready to sew!

Psych! Don’t you just hate it when your favorite show is just getting to the good part and then it’s… to be continued? You see… there’s a catch. Can you spot it in the above picture? That’s right – the green go button isn’t green… it’s still red. There are a few steps I’ve left out, and until they’re complete, the Luminairewon’t give the all-clear to stitch. I invite you to join me tomorrow as we explore the workflow of the embroidery screens. There are some nifty tools tucked into the Brother Luminaire Innov-is XP1 that you won’t want to miss!

That it is, Nancy! Shh – don’t tell anyone; it’s on my wish list, too. At least, until the next one comes along!

Great site. Thanks for the freebies and information.

Hi, Cheryle – glad you enjoyed the information – there’s so much out there to share!

Hi Carla
Thank you so much for the beautiful quilt lesson for the Luminarie.
I have just purchased one last week&love it.Keep up the good work&love the magazine.
Have told my friends about it.
Thank you
Regards
Caroline

Caroline – I wish you many, many hours of fun, discovery, learning and creativity with your new Luminaire!