Yesterday you learned how to prepare plastic templates and use them on your curved strips that had been embellished with decorative stitching on the Brother Luminaire Innov-ís XP1.

Now you get to use more decorative stitches on the Brother Luminaire sewing and embroidery machine. I decided to use a blanket stitch — there are 2 to choose from — but you could also experiment with other stitches to finish the edges of the applique shapes.

I was so anxious to get started sewing on the Brother Luminaire again, I used the N foot instead of the J foot (as recommended on the screen right in front of me!), but it worked perfectly anyway. When I noticed on the screen that I should have used the J foot, that made it even better because the foot has a clear plastic section at the front so you can see where to stitch more easily. After choosing the stitch, I didn’t have to make any adjustments. I love the automatic thread tension feature on this machine! 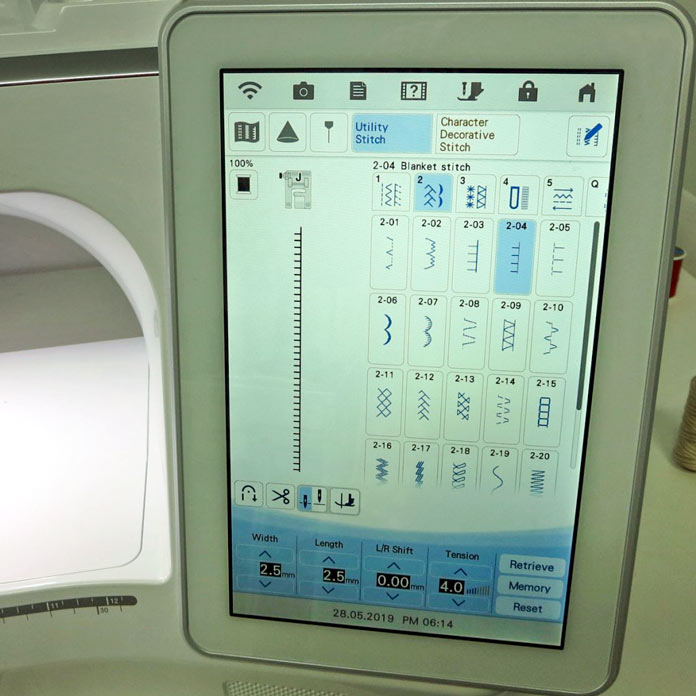 The blanket stitch on the LCD screen on the Brother Luminaire sewing and embroidery machine.

Because I was using a large cone of thread, I took advantage of the fold-able 2-thread spool stand that magnetically attaches to the top cover. Have a look at this video about the Luminaire XP1 Thread Rack that really shows the advantages of this feature and how it works. 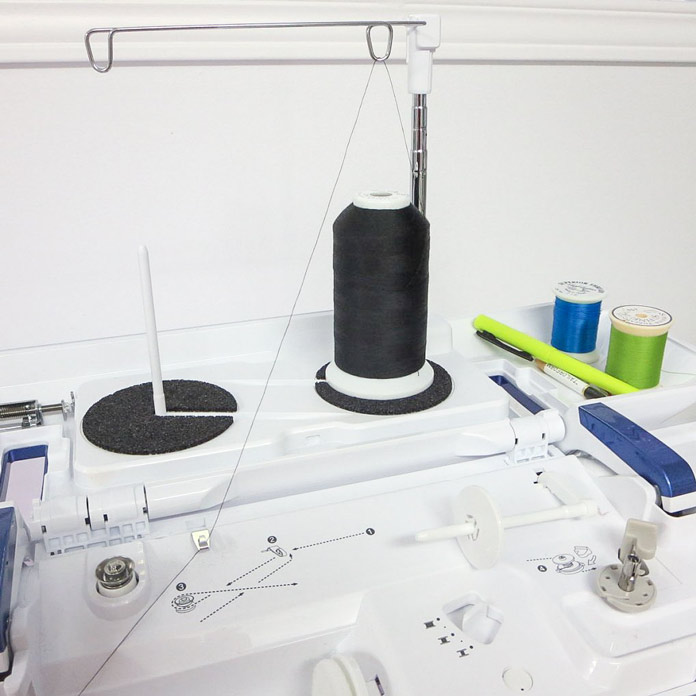 I also used  the securing stitch feature at the beginning and end of each leaf shape and sewed with a slow speed for greater control of the fabric. 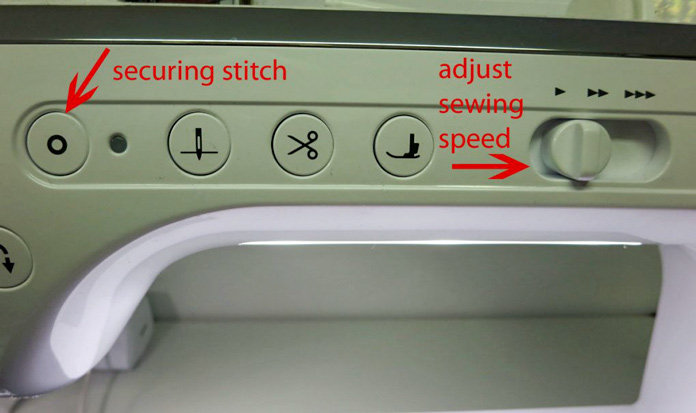 Front panel on the Brother Luminaire sewing and embroidery machine 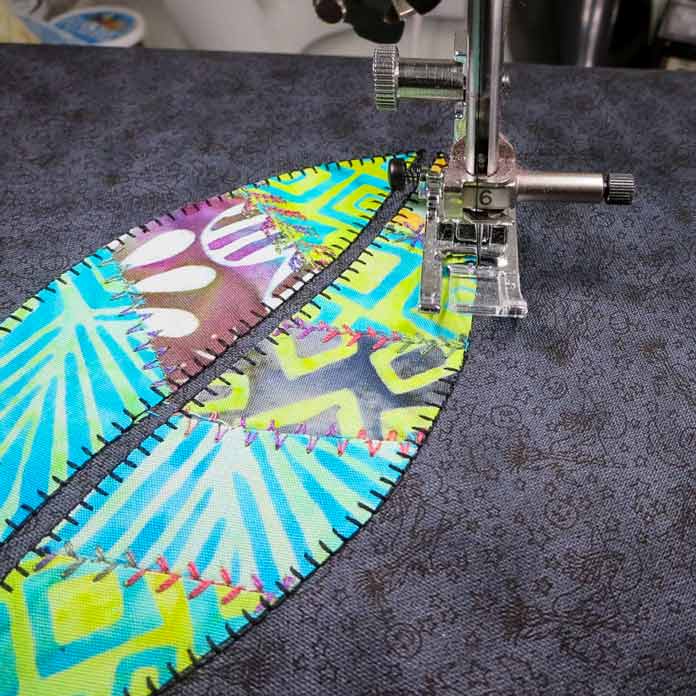 Use a blanket stitch to sew down the applique shapes. 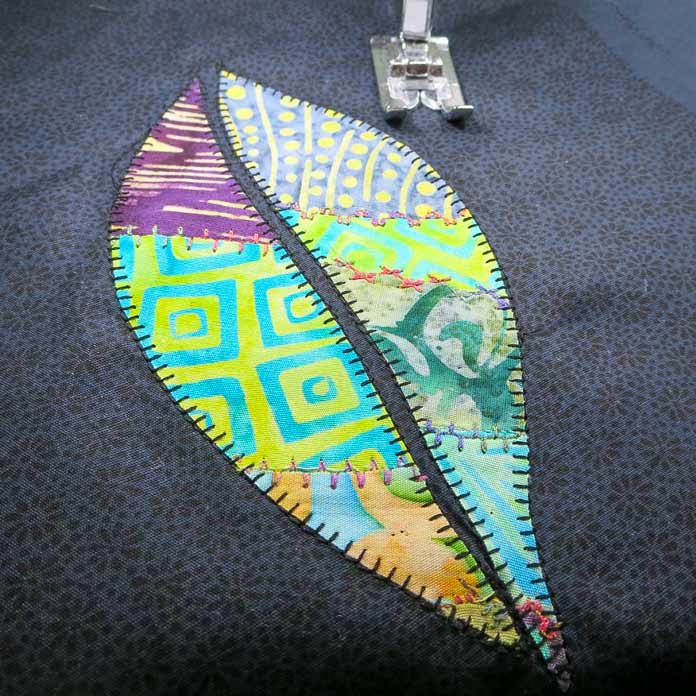 Now that the leaves are all appliqued, it’s time to trim the blocks and sew on the sashing and border.

Trim the blocks to the following sizes

Putting it all together

I used the ¼” foot that comes with the Brother Luminaire Innov-ís XP1 to sew the blocks and sashing together. There’s also a ¼” guideline on the needle plate so you really can’t go wrong in finding the perfect ¼” seam! 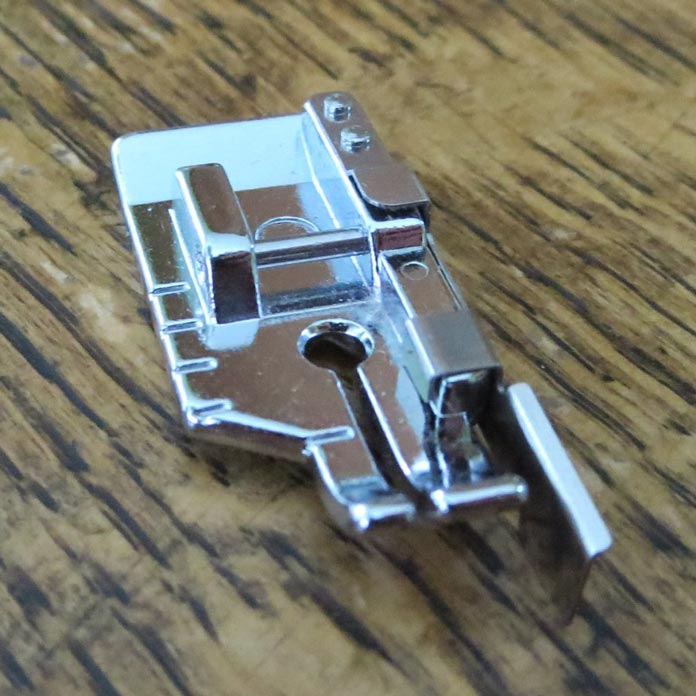 ¼” foot for the Brother Luminaire sewing and embroidery machine

Use the quarter inch foot to sew the leaf blocks and sashing strips for the top row, following this diagram.

Use the quarter inch foot to sew the leaf blocks and sashing strips for the bottom row, following this diagram. 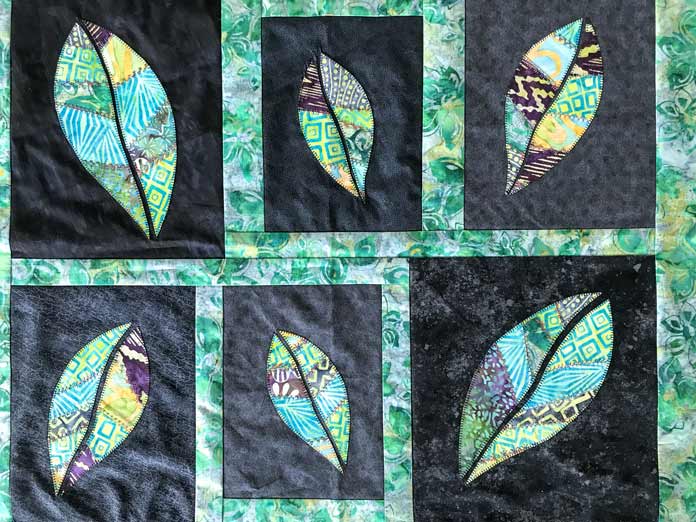 The top for the Leaf wall quilt is finished!

Be sure to come back tomorrow to discover some unique quilting options available on the new Brother Luminaire Innov-ís XP1.

This is part 4 of 5 in this series.
Go back to part 3: Preparing applique shapes for machine applique

Quilting options on the Brother Luminaire sewing and embroidery machine

Playing with the drawing tools in My...

Exploring the wonders of the NEW Brother...