There’s something so rewarding about piecing simple patchwork! In yesterday’s post, we gathered and cut the fabrics to make a spring table runner. Whether you chose to go scrappy or use just a few fabrics, today we’ll use the PFAFF performance icon to start piecing the runner together.

For both runners, I placed the background fabric 3½” squares in the center of the middle row of the nine patch block.

For the Spring Table Runner, I positioned the focus fat quarter squares on each side of the background fabric square. 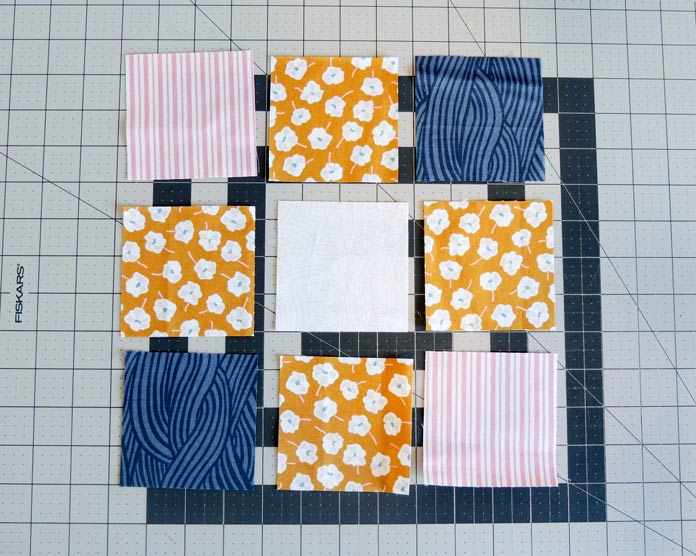 I wasn’t as random as I could have been with the Scrappy Table Runner since I used matching fabric squares. Position your squares in a pleasing arrangement, three in each row.

Here I go again forgetting to share with you the obvious ease I have when sewing with the PFAFF performance icon! One of my favorite features is the Needle Up/Down button. When engaged, the needle will stay in the down position, in the fabric, when the machine stops. The presser foot will lift off the fabric enough for me to pivot to turn the fabric. It’s like sewing with an extra hand! I rarely pin when I’m sewing, unless my projects are longer than 12″, because the Needle Up/Down feature helps keep everything moving evenly.

The IDT system engages with several of the presser feet included with the PFAFF performance icon. The IDT system helps feed the fabrics together under the needle and provides precise sewing every time. I’ll go into more detail later this week, but in the meantime, watch this video – What makes it so perfect? PFAFF original IDT System.

Speaking of presser feet – the PFAFF performance icon comes with a fantastic foot, called the ¼” Quilting Foot for IDT System. This foot is almost always on my machine! 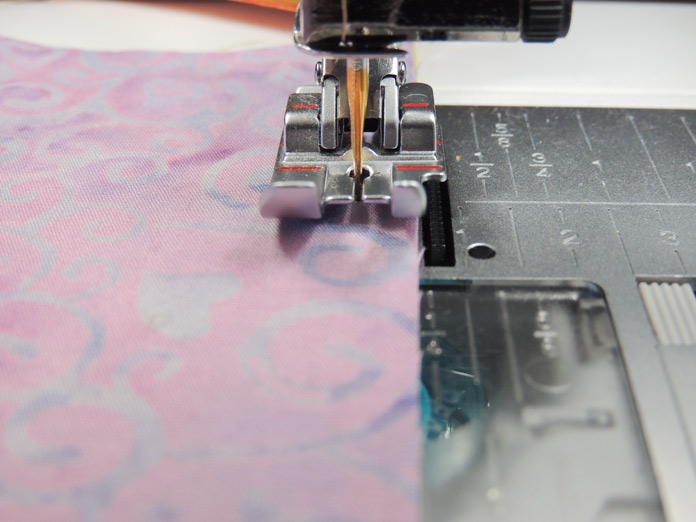 Add the setting and corner triangles

I designed the table runner on-point to create lots of space for quilting. To sew the runner together, the units are sewn together on the diagonal. We’ll add the first row – one corner square – after we sew the other rows together. 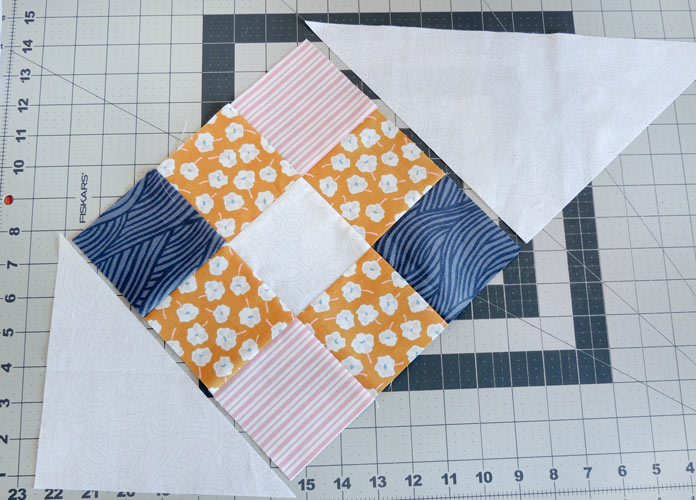 Corner square and side triangle placement with the left nine patch block. 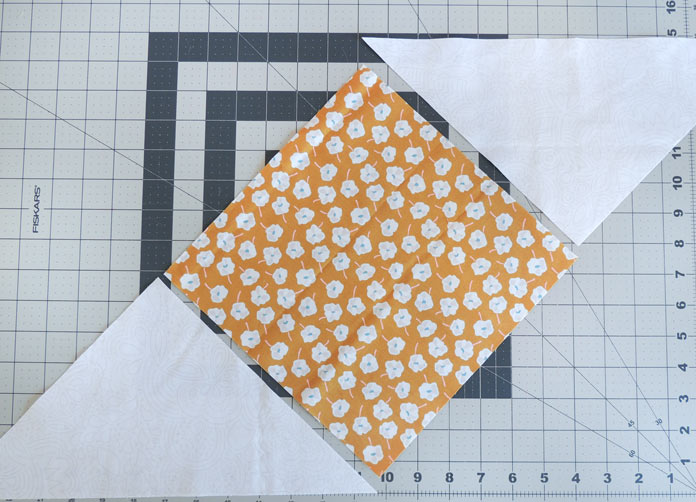 Sew another side triangle and corner square to opposite sides of the right nine-patch block. This time it will be the side triangle first and the corner triangle on the right side. Press the seams to triangles. 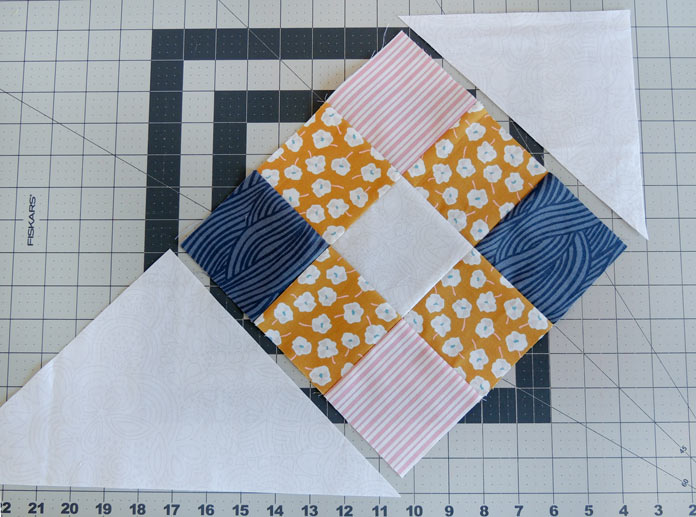 Now, let’s go back to the second row and sew a corner square to the top left of the nine-patch block, centering it along the edge. It can be helpful to fold the triangle in half and finger press at the center, then do the same for the nine-patch block row. The goal is to have an even overhang at each end for a seam allowance. Press the seam to the corner triangle. 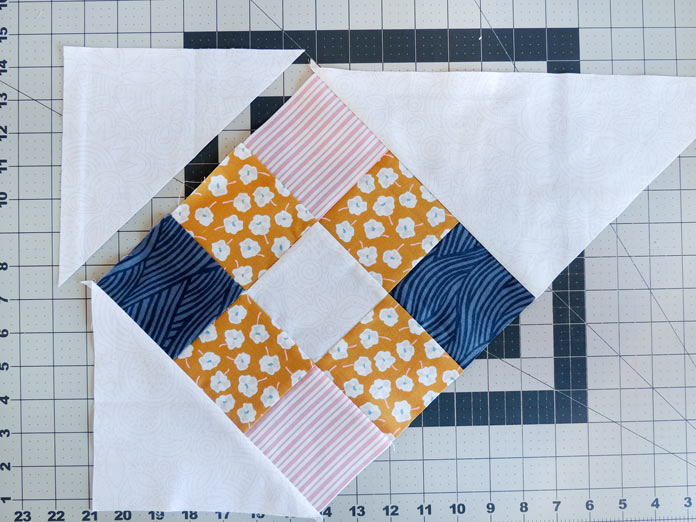 Add a corner square to the left nine-patch block row.

Sew the remaining corner square to the bottom edge of the right nine-patch block unit. Press the seam towards the triangle. 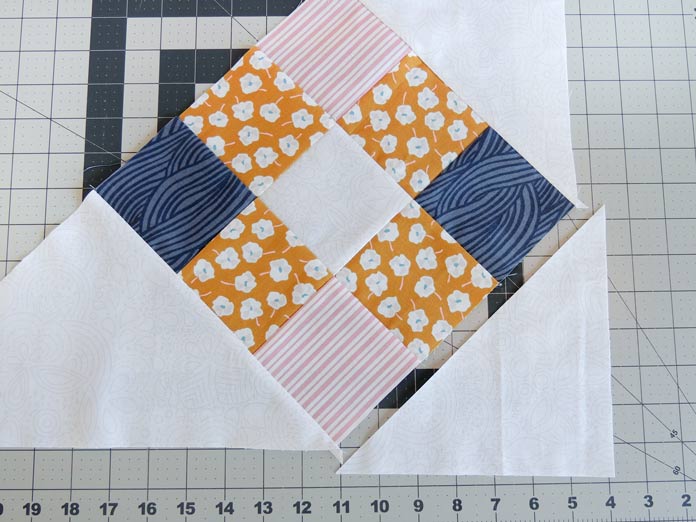 Add a corner square to the right nine-patch row.

The last step is to sew the rows together. The blocks and triangles should have nesting seams and will easily sew together. Press each seam toward the focus fabric row.

I used the Straight Stitch Needle Plate that comes with the PFAFF performance icon (in addition to the standard needle plate) which helps sew the triangles without my fabric getting pushed into the needle hole at the beginning of each row. I love that! It’s so important to not stretch these bias-cut triangles, and I know I can trust the machine to help me guide them under the needle accurately each time. 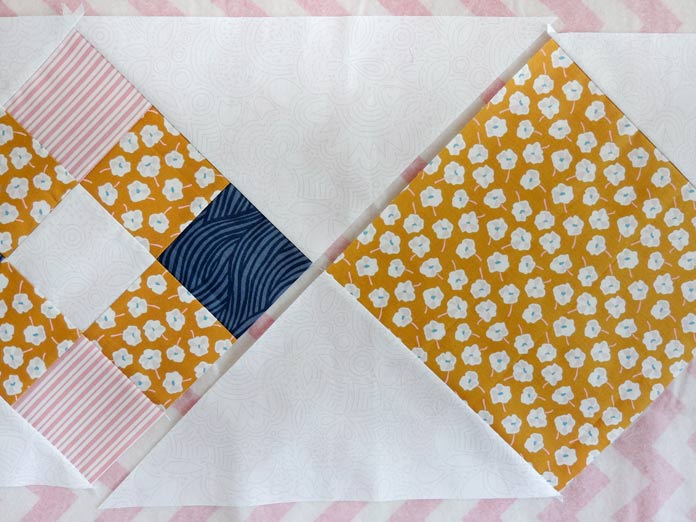 Sew the on-point rows together.

The center of the Scrappy Spring Table Runner goes together in the same way – you can see it below. No matter the fabric, I like how easy it is to sew accurately and precisely with the PFAFF performance icon.

Join me tomorrow to learn how to add the borders, and more!

Go back to part 1: Spring has sprung all over this quilted table runner!

Spring has sprung all over this quilted table runner!

Stitch in the ditch AND grid quilting with...

On-point quilting: Where to start with cutting and...

Create or edit your stitches with the PFAFF...

Creating custom stitched fabric is FUN with the...

More is more with a quilted maximalist cushion...

A FUN way to blanket stitch with the...

The ‘Radiant Stitch’ on the PFAFF performance icon:...

Connecting the pieces to complete a reversible...