It can be an enjoyable experience to learn something new when you plan for it! In yesterday’s post, we explored the idea of staying in and learning from the built-in tutorials on the PFAFF performance icon. In today’s post, we’ll explore one of the exclusive features on PFAFF machines – the Stitch Creator Program. 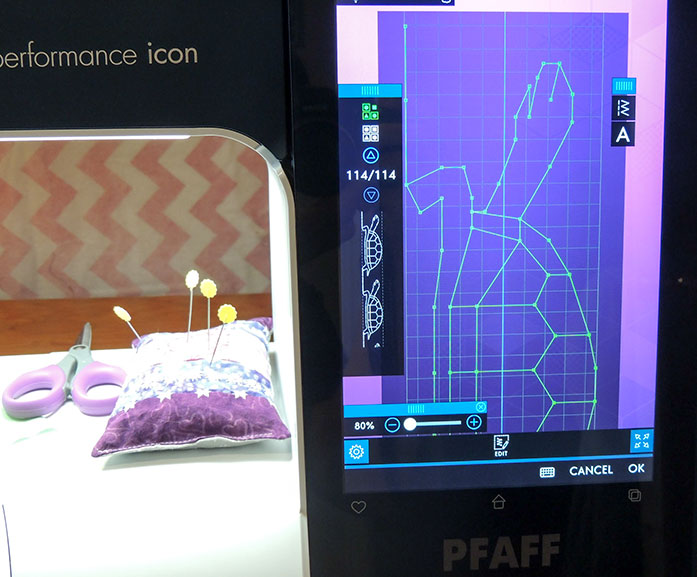 In the Stitch Creator program, not only can you edit and change many of the built-in stitches, you can also create your own. The wide needle range of the performance icon means you can design stitches up to 9mm wide. The large multi-touch screen makes it easy to see all the edit options and functions you can use within the program to move around and edit a stitch. 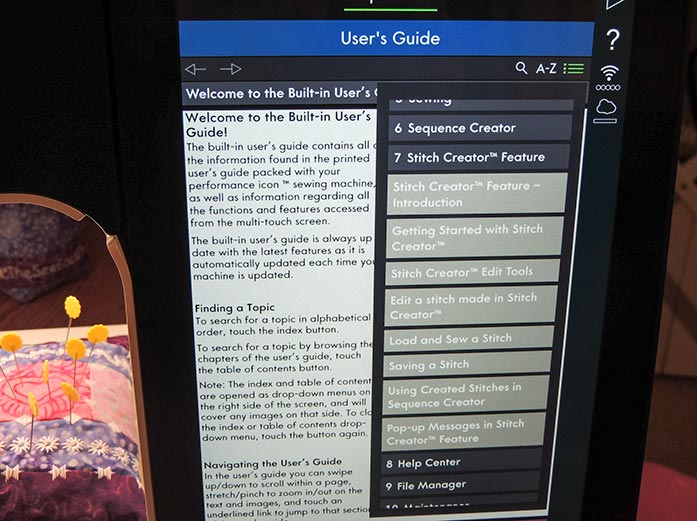 I’m still far from designing my own stitches, but even after this bit of exploring, I was already thinking about what I might want to make. To start, I inserted a stitch and then added some words to go with it. I love the animal stitches included on the performance icon and thought it would be fun to play a bit with the turtle. At first, I just added words between turtles and realized I could do more – I needed to think beyond what was already there. I decided to emphasize the turtles by using the triple stitch button; the turtles would be stitched three times and the words in between only once. 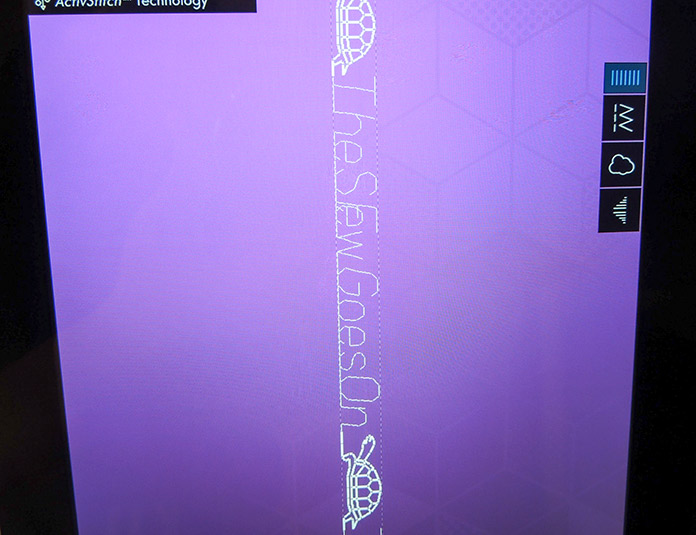 I tried a few things and then noticed on the multi-touch screen I had put two ‘e’s in my project and one was capitalized; I needed to fix this! When I pressed on the screen for a few seconds – a long touch – a menu popped up giving me the option to edit in Stitch Creator. The photo below is from when I first found this feature – notice it’s all turtles! At this point, I added the triple stitching and then the words. 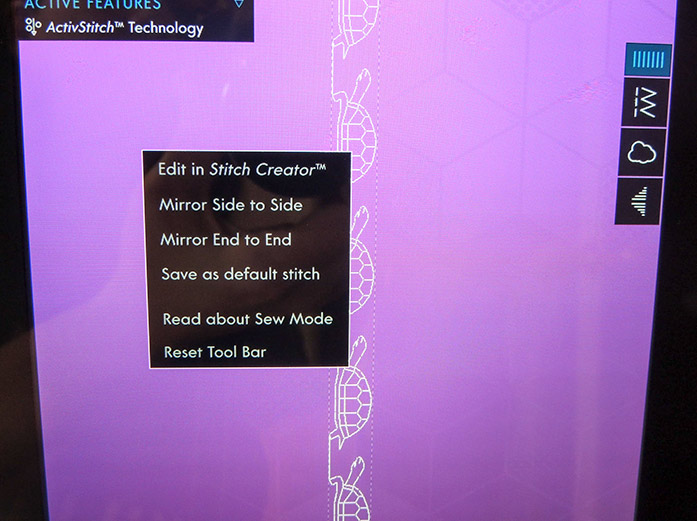 In this program, I was able to highlight and edit stitches. At first, all the stitches were highlighted green. After pressing the top icon, the highlight went away. I scrolled the screen down so I could get to the last stitch on the capital E. I touched the garbage can icon to ‘trash’ each stitch. I pressed until I could see on the screen that all of the stitches for the capital E were gone. Then I pressed Done so the stitch would load into sewing mode. 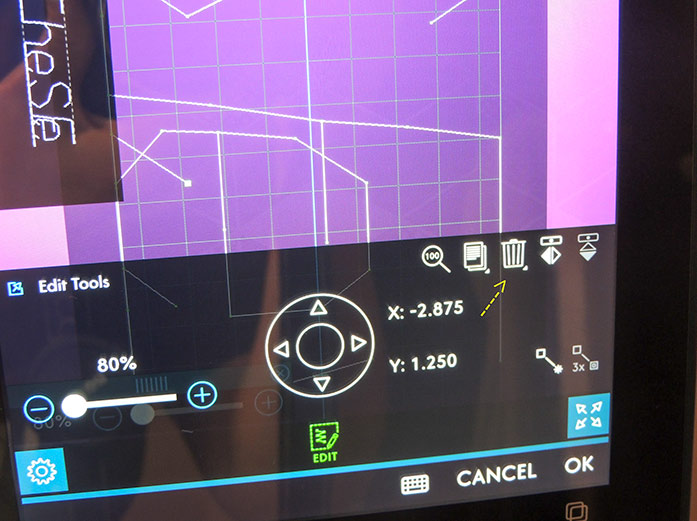 Garbage can icon for deleting stitches

I know it doesn’t seem like much and hopefully you’re already thinking of more ways to play. For me, this was a fun challenge to learn a new part of the performance icon. You’ll see below that I ended up mirroring the turtle stitch, going in the opposite direction in my final stitch out than what I had previously set on the screen. I also tried out my stitching and found out it was longer than the strip of fabric I had cut to use; I was able to go in and edit the stitch again, this time reducing the length of the stitching. 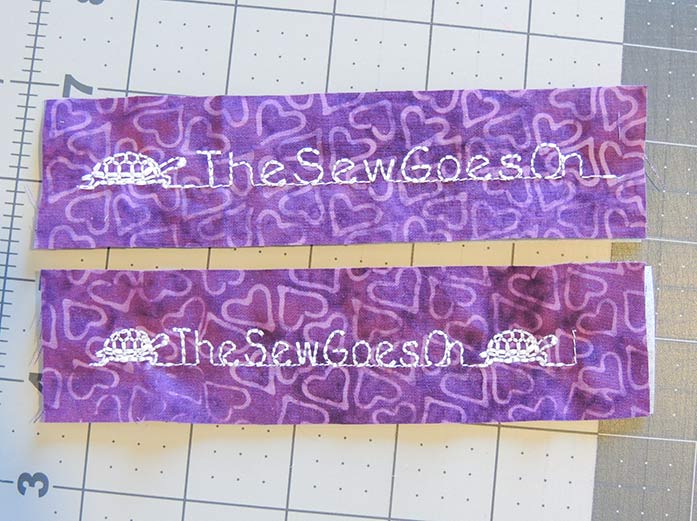 While I do like to learn new things, I also like to use what I make in a project. I decided to make myself one more thing for my quilting space – a quilted thread catcher. This would help me use up a few more of my leftover strings and my new stitch samples. Plus, I would have two little coordinating projects for my space!

Today I had fun exploring the Stitch Creator program on the PFAFF performance icon. I think I could spend a lot more time creating with this program!

Be sure to check in tomorrow to learn how to make a coordinating thread catcher to match the pin cushion we made earlier this week.

Go back to part 3: Performance icon: built-in tutorials keep you learning and safe at home!

Go to part 5: A pretty quilted thread catcher is a happiness catcher

A pretty quilted thread catcher is a happiness catcher

Stitch in the ditch AND grid quilting with...

On-point quilting: Where to start with cutting and...

Create or edit your stitches with the PFAFF...

Creating custom stitched fabric is FUN with the...

More is more with a quilted maximalist cushion...

A FUN way to blanket stitch with the...

The ‘Radiant Stitch’ on the PFAFF performance icon:...

Hi Sarah. I am getting a performance icon. I can’t find any information on the maxi stitch it doesn’t have a maxi stitch option/menu! Pleas can you give me some info.
Many thanks
Michelle

Hi Michelle! Congratulations on getting a performance icon! The maxi foot is included with this machine as it does have several built in maxi stitches. The stitch menus are organized by style and not by presser foot. Stitches that are created with side motions will use the maxi foot so you can look through the menus to select one. When a stitch is selected, the machine will indicate which presser foot to use. There is a Maxi art stitch menu (5.4) and many of the animal stitches also use this foot. I hope this helps. Enjoy using your new machine!

On-point quilting: Where to start with cutting...

A pretty quilted thread catcher is a...