I’m ba-ack! And…obviously, so are you! I’m so glad you’re here to share in the discoveries as we step beyond yesterday’s initial run-through of the Brother Innov-is XP1’s embroidery screen workflow. This machine, also known as the Luminaire, is already proving to be very user-friendly and intuitive. It was an easy process to set a design and carry it through to stitch completion. Choosing only one was the hard part! So today we’ll look at some of the Luminaire‘s on-screen editing capabilities. Not all of them though – there truly is a method in my madness, and I’ve played enough now to have a “Plan”. I’ve picked out some oh-so-cool functions to withhold for tomorrow and the following day’s posts. Oh, the suspense!

For yesterday’s sew-out, we skipped the Edit screen altogether but that’s where I want to play today. I’ll show you how to take a handful of the built-in designs, combine them, rotate, scale (that’s different from sizing, you know), duplicate, assign thread colors, group them, and more. Did anyone rise to the challenge yesterday and define any those icons on the Edit screen? Let’s start playing and see just how right you were…

As I did yesterday, I selected and Set a design from the built-in library. It’s a simple one-color flourish that I plan to add to. And…that should make it easy for you to guess my next move: which icon in the left picture below will let me do this? Right you are, Harry! Touching the Add icon brings me to a familiar screen, the design menu – you can see it in the right-hand photo: 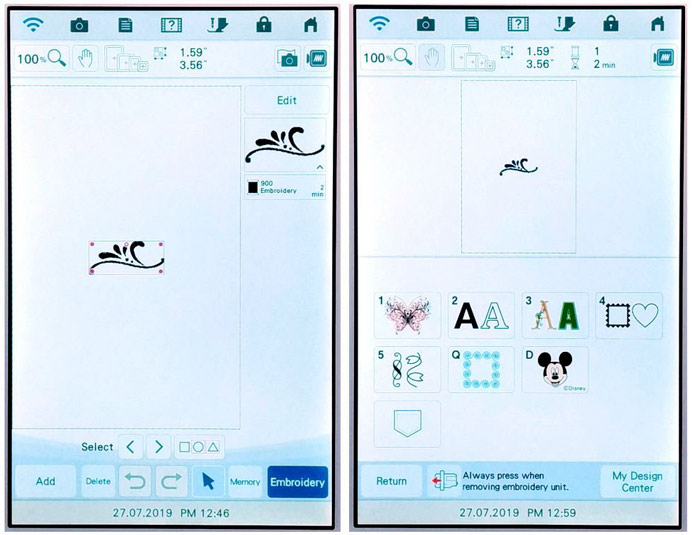 The start of something good…one design element set and more to come!

I chose the built-in designs menu #1 again, and that gives me the tabbed display you can see in the next picture set. I can swipe my finger across the tabs to get to the last one (#13), and then swipe up through the designs to scroll to the design I want. Keep doing this until you’ve set all the designs you want (and consider stitching order – the order you import them is the order they’ll stitch). 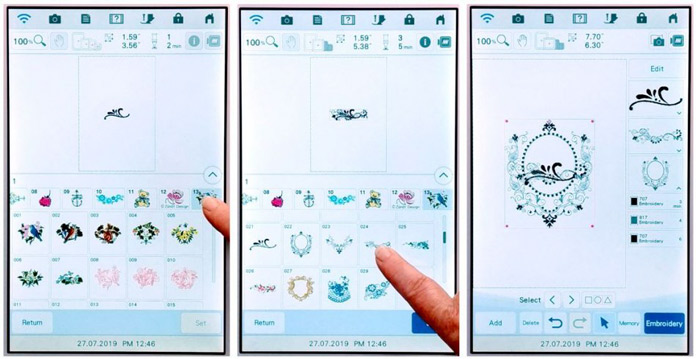 Now I’ve got some designs on screen to play with, in fact, I need to rearrange them, or I’ll be stitching a layered mess! Did you notice in that last pic how they all came into the center of the hoop? And the last one I brought in has the red control handles showing? That means it’s active, or selected, and anything we do now will affect that one. So let’s open up the toy box – that’s the icon labelled Edit on screen, and see what we can do.

Hmmm. Rotate first. It’s pretty intuitive, just touch the Rotate button and then the 90° counter-clockwise icon. Couldn’t get much easier! Well, actually, it can… I now want to move that design to the left edge of the hoop – and all I need to do is drag-and-drop with my finger! Omigosh! This is so cool! 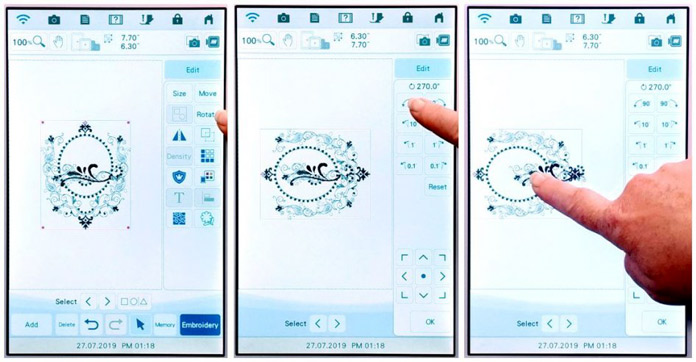 Rotate and drag&drop functionality are just two of the editing tools on the Luminaire.

Want to know what else I discovered when I went to arrange the rest of the designs? When a design is selected, it has a hollow red handle that you can drag around to rotate freely on screen! And of course, the Move icon lets you position elements with incremental precision. Perfect for us control freaks (yes, we know who we are!).

Now that I have half of a design – it’s time to create the other half. To get the flourishes on the bottom, I‘ll duplicate each, rotate, and flip them before arranging them. In the Move screen, I compared the reference numbers for the top design placement to make sure I mirrored them perfectly on the lower half. 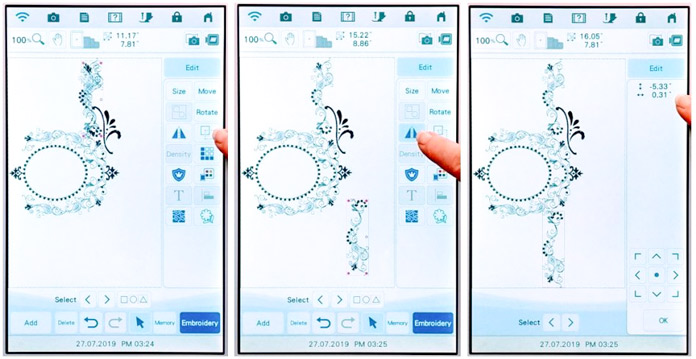 Now I really like this arrangement, and don’t want to accidentally move a single element of it out of place, so I will group them together. To do this, there’s a button beside the selecting arrows near the bottom of the screen to let us select multiple elements. You can see these steps in the next collage: 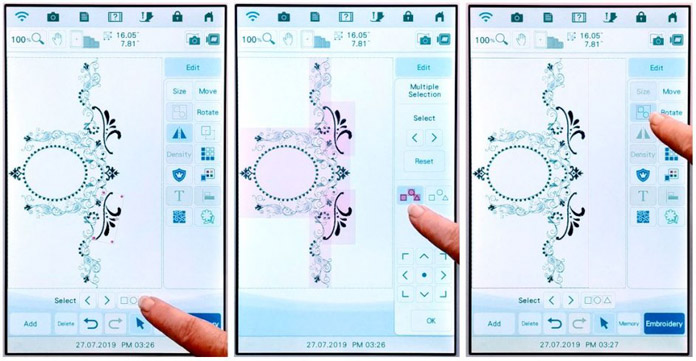 Advanced selection tools allow you to group elements on screen.

Next I’ll add a monogram. The Luminaire boasts several monogram alphabets, so again, the hardest part of this exercise was choosing which one I wanted.

TIP Monogram alphabets, unlike fonts, treat each letter as an individual design, rather than a string of letters we can type in all at once.

Back to the Add button, then Menu #3, I chose the letter K from the last tab. As you can see, it’s way too big. 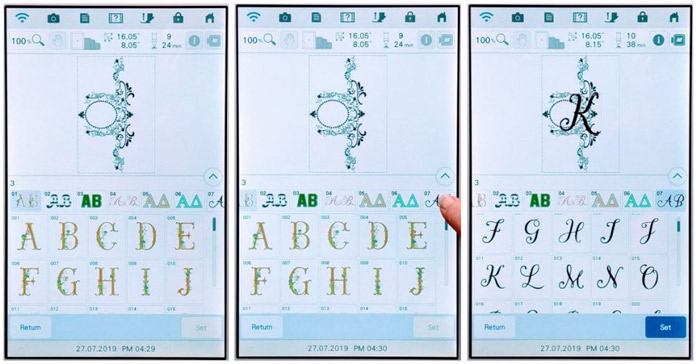 The Luminaire features seven monogram alphabets to personalize your projects.

The Luminaire has an advanced processor that’s powerful enough to recalculate stitch counts when sizing a design. It doesn’t just take the same stitch count and make the design bigger or smaller, it actually adjusts the fill densities to maintain perfect embroidery – it doesn’t just size the design, it scales it. And it’s easy! Under Edit, just touch the Size tool and select the Scaling option, and either drag a corner of the design larger or smaller, or use the corresponding buttons to achieve the size and proportion you want. There are even handy Move arrows on the Size screen so you can position the element and adjust it in place. As you can see, I also rotated it. 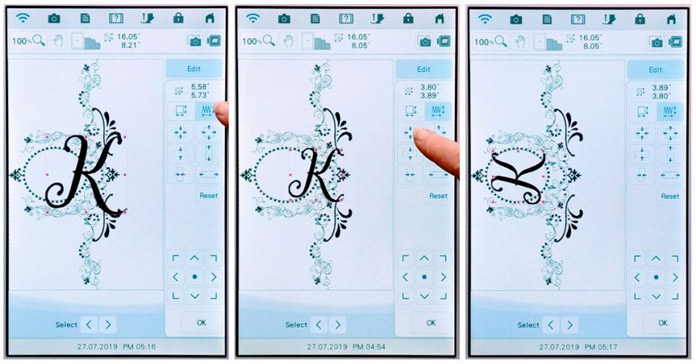 Advanced processors recalculate the stitch count when shrinking or enlarging a design.

Next I’d like to show you some of the nifty things the Luminaire can do with fonts. There are 24 fonts built-in, with numbers, punctuation, and special characters for each. I used my favorite font and entered some text to go under my design, in two lines, all in one step thanks to the handy-dandy next-line button! And take a peek at the bottom row in the last pic… text size, array (curve baselines), spacing, alignment… and the ability to change your mind about the chosen font. So much control, right on the machine!

Let’s Set the text and we’ll be ready to play again. Except, sigh…I typed a word incorrectly, only realizing after it was too late. 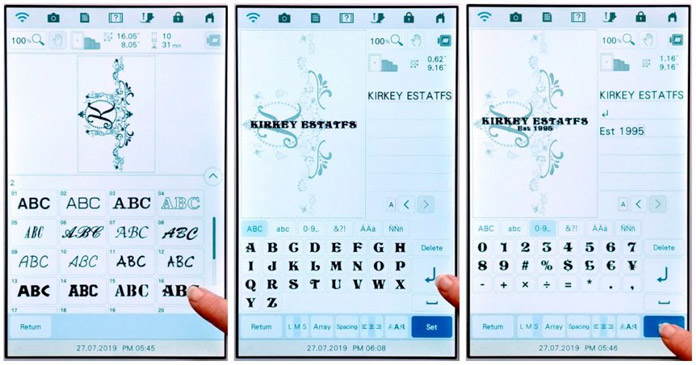 The Luminaire has many font entry and design tools… too much fun!

Fooled you! It’s never too late! I was easily able to ungroup the text, click on the Text Edit icon, and correct my oopsie. While doing that I decided that this wasn’t my favorite font anymore – at least not for this project, and with no effort I was able to reassign another font to the already-entered text. See? Never too late! I even went and changed the second line font style, too. 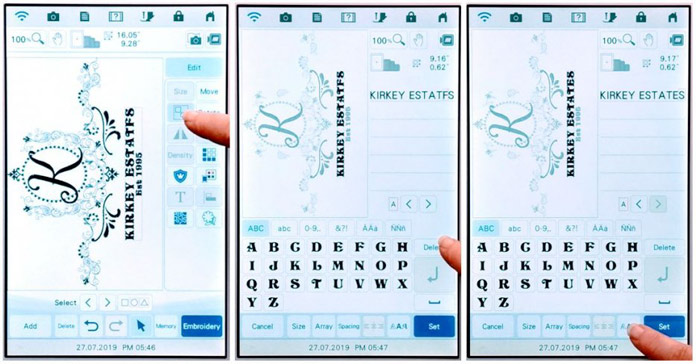 Easy editing tools let you correct spelling, change fonts, and more – at any stage before stitching.

I have two more cool toys to share with you before we start stitching this masterpiece. Using the Thread Palette, you can assign your own color choices, so that they prompt you – no guesswork, even if you get distracted while stitching (who, me?). You can choose from several thread brands, and either enter the color number or simply pick a color from the palette. I’m using the Isacord thread color numbers. 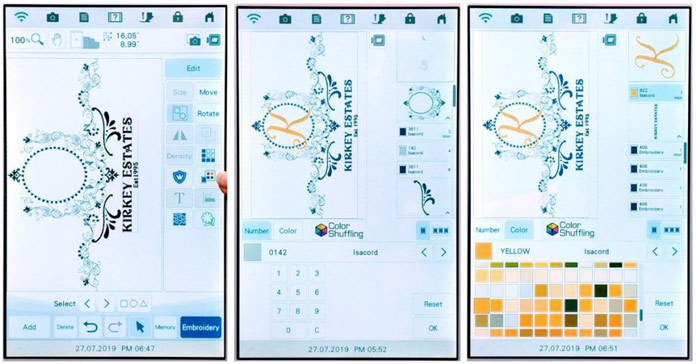 Pre-assign your thread colors instead of guessing along the way.

I’m really pleased with this design, and it’s about time to hit Embroider and begin stitching. Once in the Embroidery screen, the design elements are grouped, and any changes such as moving and rotating affect the whole thing. Don’t get me wrong – we’re not past the point of no return yet; we could still back up to the Edit screen and make changes. But it does make adjusting its position in the hoop easier if it’s all one piece. So, I’ve centered it, and if you’ve been keeping track… I promised you one last oh-so-very-cool tool, and here it is: This design as-is has 32 color changes (ok, that’s including the letters; it would distill that down to 10), but still…see the color bar across the top of the screen in the first pic below? One teensy little button can change all that… you can see me engaging it in second shot – and look – I’m down to four color changes! Color sorting is just magical! I’ll save this design to the Luminaire‘smemory. Even once it’s saved, I can retrieve it and edit it further, even changing the initial and name if I want. And I just might…wouldn’t this make a lovely little wall-hanging to give as a housewarming gift? 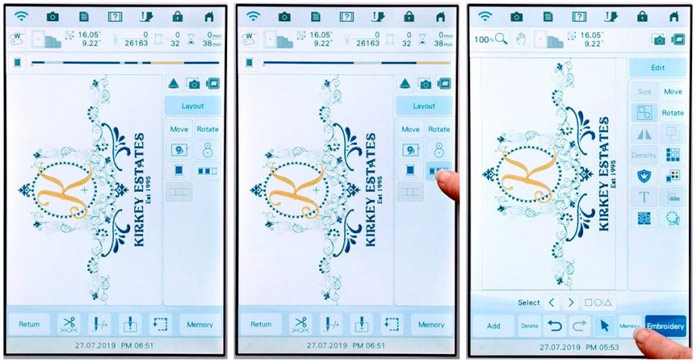 Color sorting on the Luminaire can eliminate a LOT of thread changing!

Now we get to hurry up and wait… it’s a 38 minute design, so I’ll sit and listen to the Luminaire purr as I write the final paragraph for today. I can’t wait to show you the design all stitched! Heck, I can’t wait to see it! 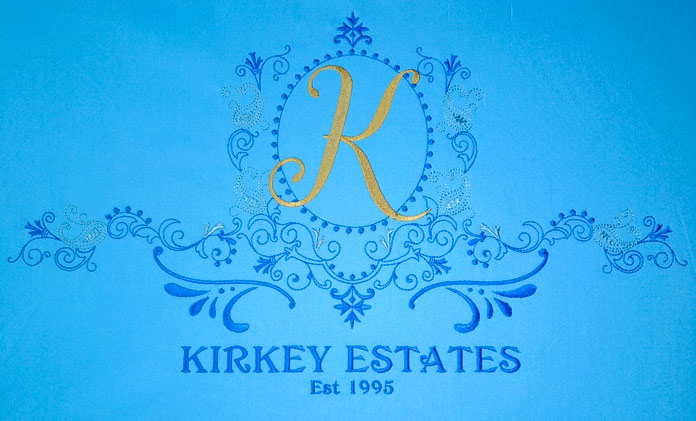 The completed design. I could only wish I had an estate, let alone two, LOL, but doesn’t this look great?

I’m so pleased with this! If you have your own Brother Luminaire Innov-is XP1, I hope you were trying out these toys along with me. Of course, you would have substituted your own initial and name, and picked your own favorite colors. Of course. Right?

I had fun with this, and I’m thrilled you stuck with me to see the final product. Please plan to join me tomorrow, when the fun continues with a bit of a quilting theme. So all you quilters, and even you non-quilters will want to make a point of popping in to get inspired with how easy it is to create stippling-in-the-hoop with the Luminaire. Hmmm. Does this one need stippling?

This is part 3 of 5 in this series.
Go back to part 2: Embroidery screen workflow of the Brother Luminaire Innov-is XP1

Go to part 4: Create stippling-in-the-hoop with the Brother Luminaire

very tempting, thanks for showing it

Carol – you are right, the temptation is great!

Thanks for the information.

Hi, Debbie – hope you are able to use the info in creating your own beautiful projects!

Thanks, Theresa! It was fun, too!

Brother Luminaire, My Design Center, and a...

Exploring the wonders of the NEW Brother...