Have you got your first block done? It’s so much fun to see the same blocks using different fabric collections. The calm and serene coloring of Claire’s batiks and the bright colors that Paul chose are stunning in Block 2.

And I get to play with the luscious Blue Stitch collection by Christopher Thompson for Riley Blake Designs, and what can I say – I love this one the most. There’s nothing more classic than a blue and white quilt. 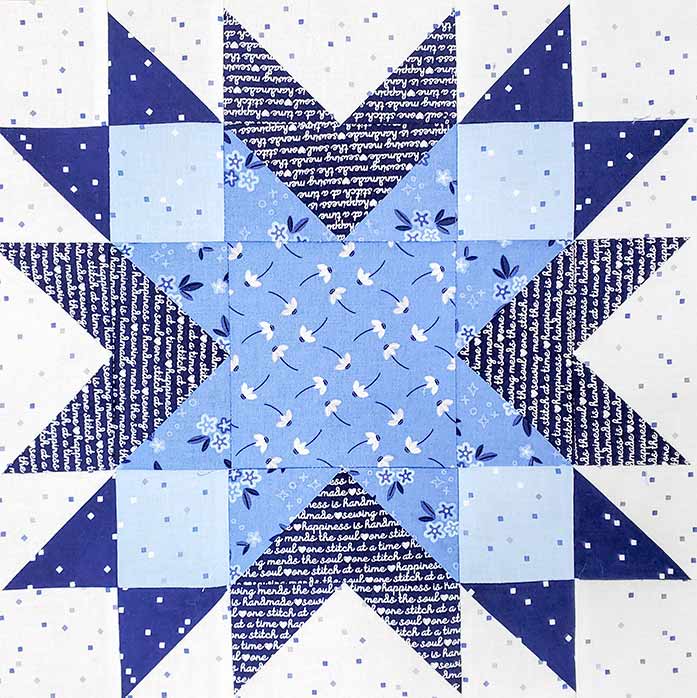 I’ve got more great pressing and sewing tips today, so let’s get started.

I chose a different method to make my flying geese units, and you’ll see why in a minute. I also cut the squares for the HSTs (HSTs) slightly larger so I could trim them down. I’ve identified which pieces are background, and for the rest of the fabrics, I picked fabrics that would provide contrast to the pieces beside each one. 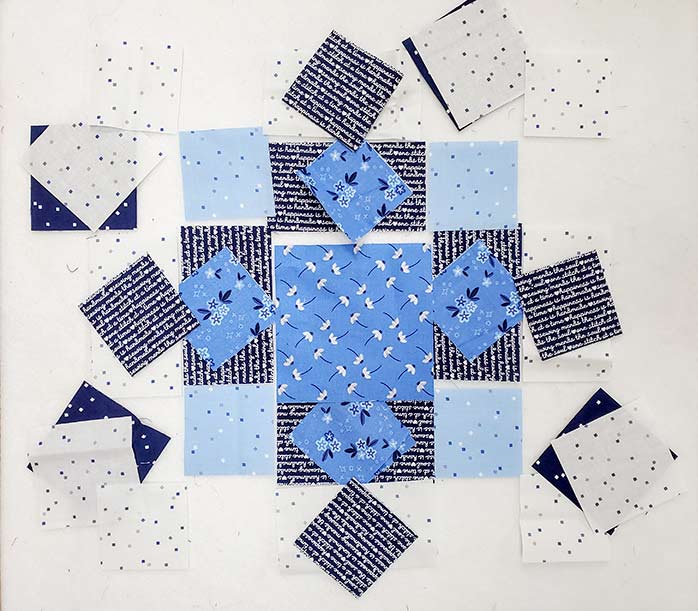 The block components are cut and ready to sew together

I decided that the selvages were too pretty to sit around. As I’m working on the fabrics, I’m cutting off the selvages and thinking of a creative way to use them. 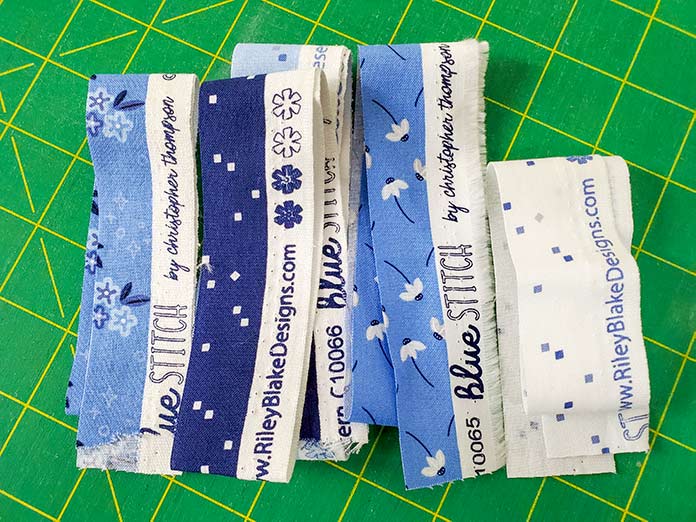 The selvages of Blue Stitch by Riley Blake Designs

I cut the squares for the HSTs at 3”. Sew a scant ¼” seam on both sides of the drawn line. Cut the units apart, press to the dark, and trim to 2½”. Actually, in hindsight, it would be better to press these to the light. I didn’t do that, but it’ll help to reduce some bulk. 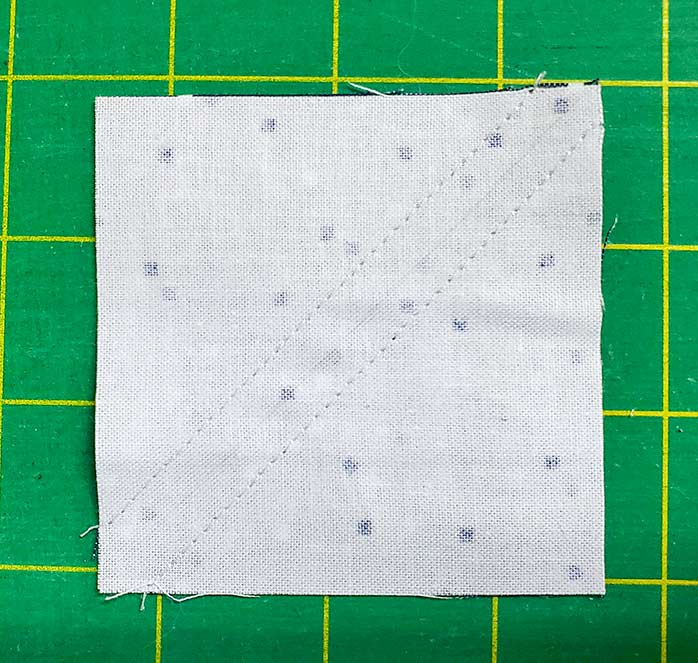 A square of light fabric with two diagonal lines of stitching

The dark blue fabric I used for the flying geese units is directional, so I cut them as rectangles so all the writing will go in the same orientation. When sewing the squares to the rectangle, you want to sew just slightly outside the drawn line. 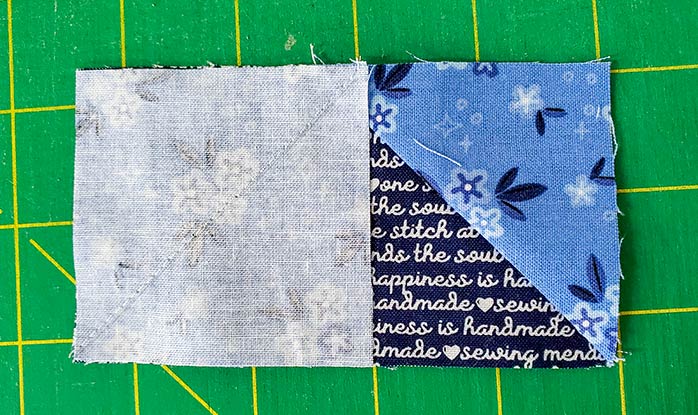 A square of directional print to be sewn to the rectangle

Lay the square in the opposite direction to which you want the directional print to go. You can always test by flipping that square back BEFORE YOU SEW to make sure that it’s correct. 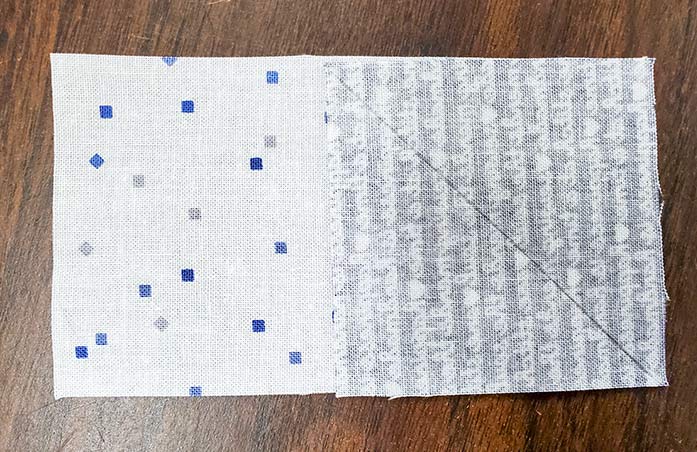 Positioning the directional print square onto the rectangle

Yes, I trim those little corners off, and I KEEP THEM. I’ll be sewing them together and making small HSTs. I might find a use for them along with the selvages! 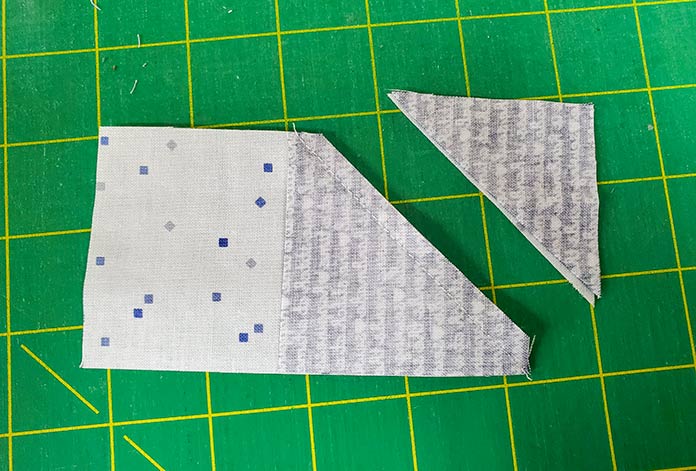 Trimming the corners from the flying geese unit

Here are the two different flying geese units, and you can see the direction of the dark blue fabric is in the correct orientation for both. I need to make four of each of these sets. 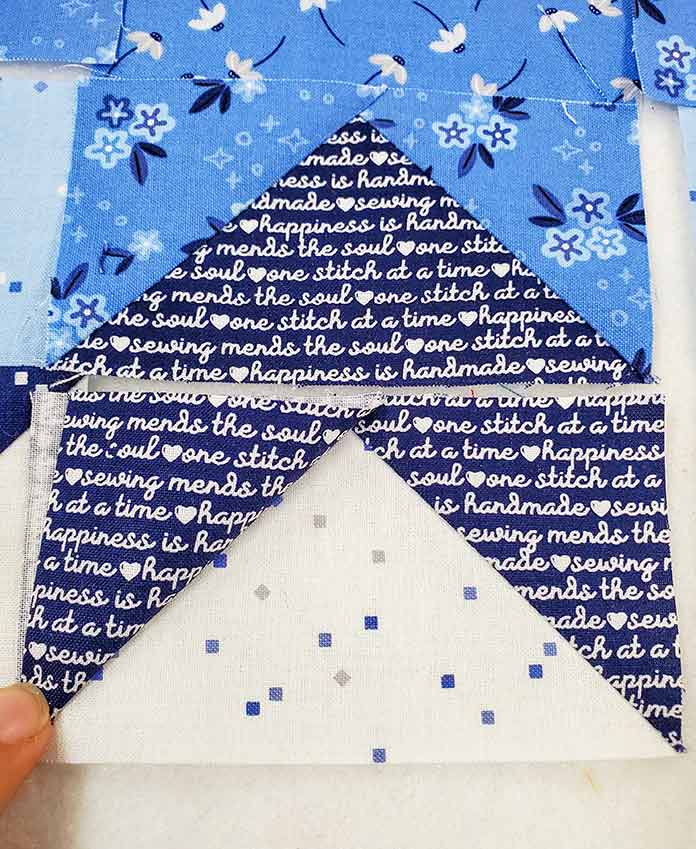 The block components are together, and the block is going to look fantastic! At this stage, the fun begins as I love to find the perfect pressing plan that allows me to twirl as many seams as possible (if applicable) and to have all the seams nesting. My goal is to reduce bulk. As I looked at this photo, I just realized that it would have made more sense to press the HSTs to the LIGHT. Perhaps, I needed to start the pressing plan a bit earlier! 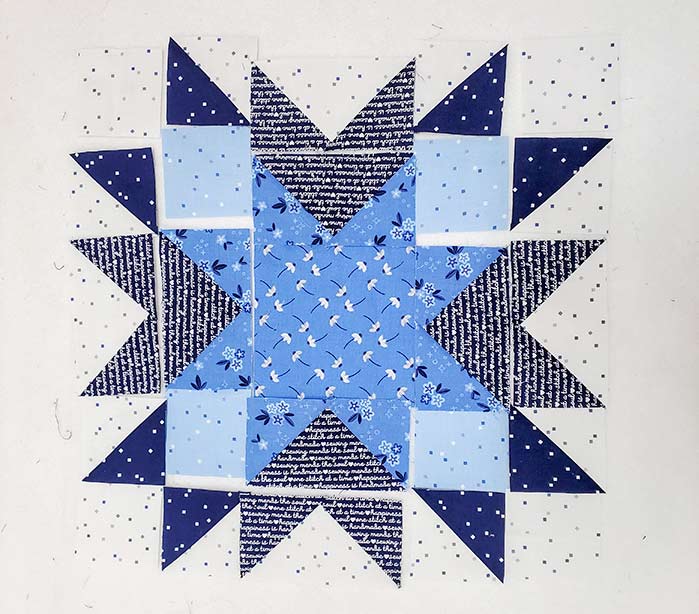 The block components are ready to sew together

Start by sewing the two flying geese units together. Press TWO of the units to the dark unit and two of them to the light unit. You’ll need to manipulate that center point with your finger before following up with some steam from your trusty iron. This finger pressing will get that center seam flat. YES – even if you’re pushing that point back onto itself. A little bit of finger pressing goes a LONG way in making this happen. 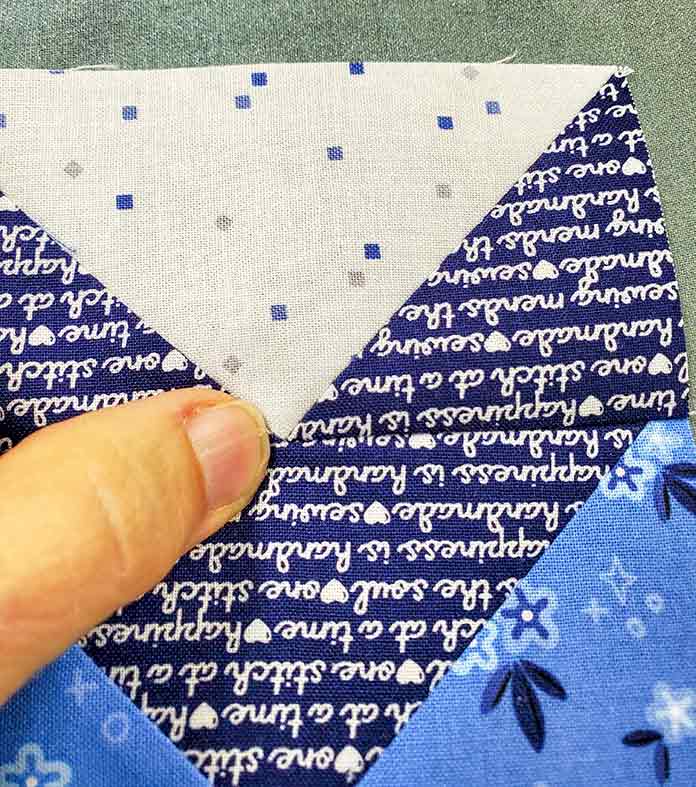 Finger pressing the point in place before pressing with the iron 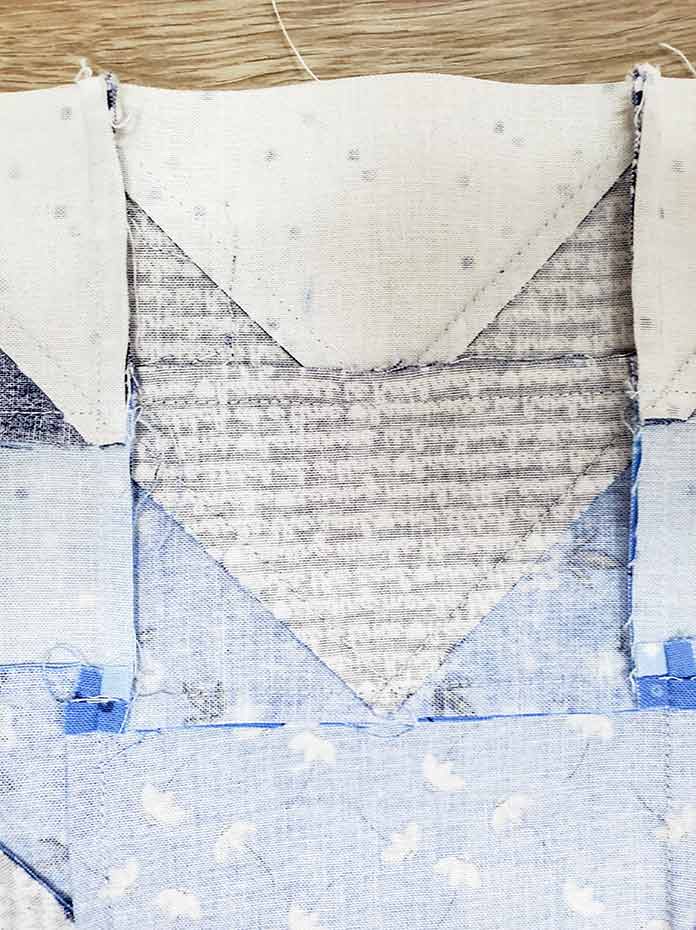 Two of the flying geese components pressed to the light unit 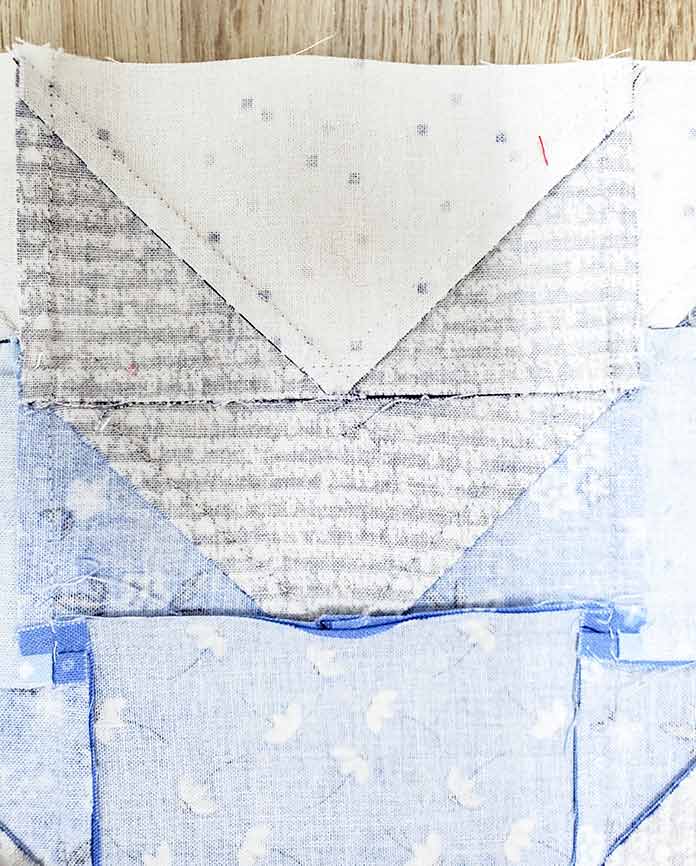 Two of the flying geese components pressed to the light unit

Next up is the corner units. I sewed them together like a four-patch. Then I pressed two of the units, so the seams were going clockwise, and two units are going counterclockwise. I keep my four patches attached (with chain piecing) and then layout the two sections on the ironing surface, as shown below. Set the seams with the iron, gently flip the two parts, and press the seams from the front. The seams in this diagram will end up counterclockwise. To press clockwise, start with the pieces in the opposite direction. 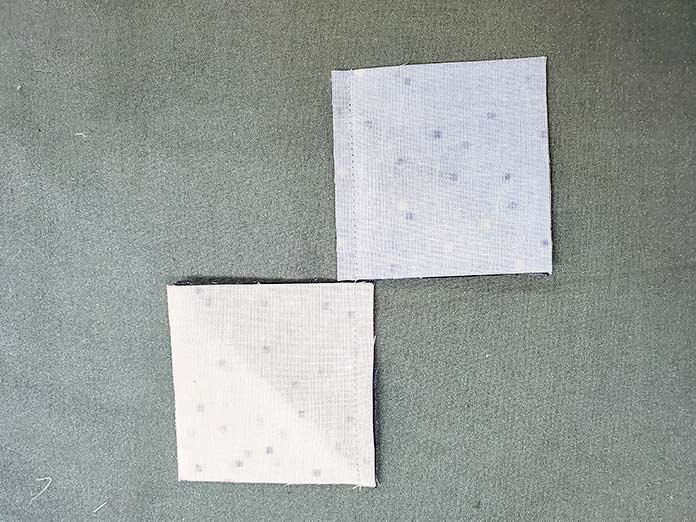 Laying out the four-patch in preparation for pressing

Then sew that final seam. To get the seam to twirl on the back, use your seam ripper to RELEASE, not cut the stitches within the seam allowance. 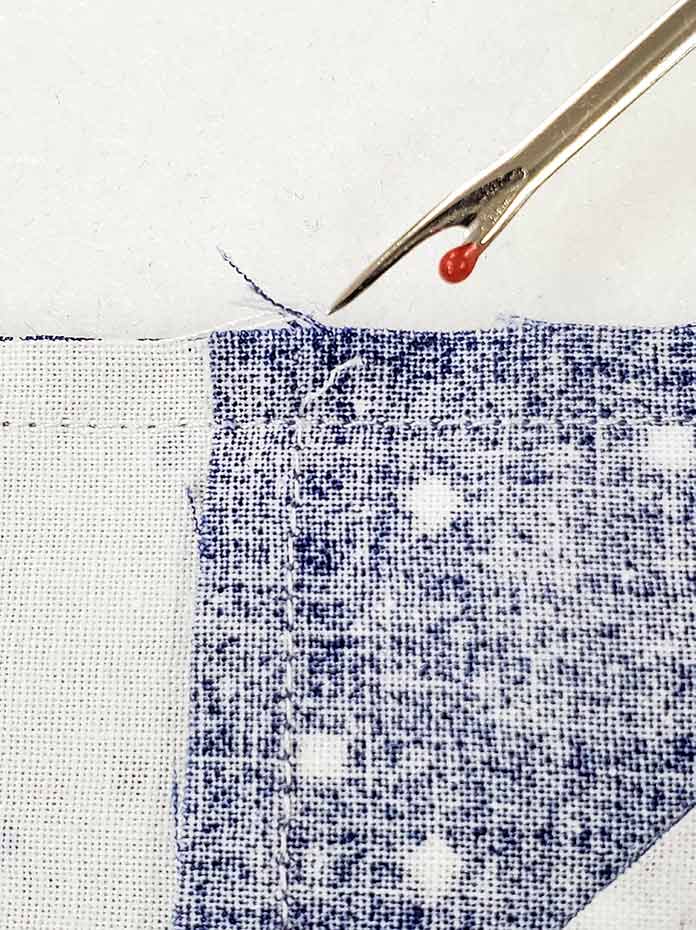 The stitches in the seam allowance are released 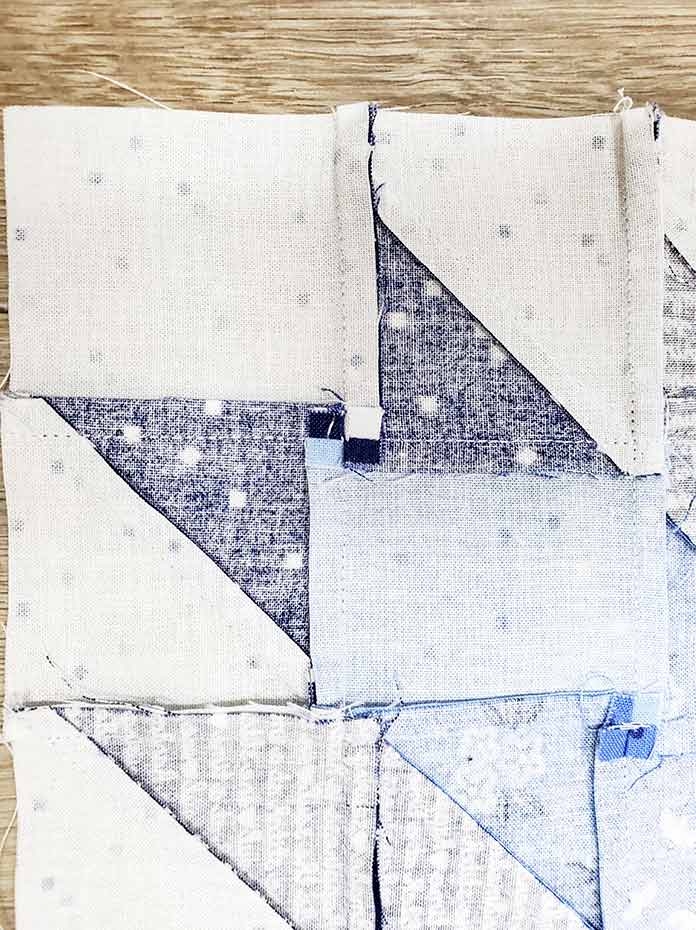 A four-patch with the seams pressed clockwise 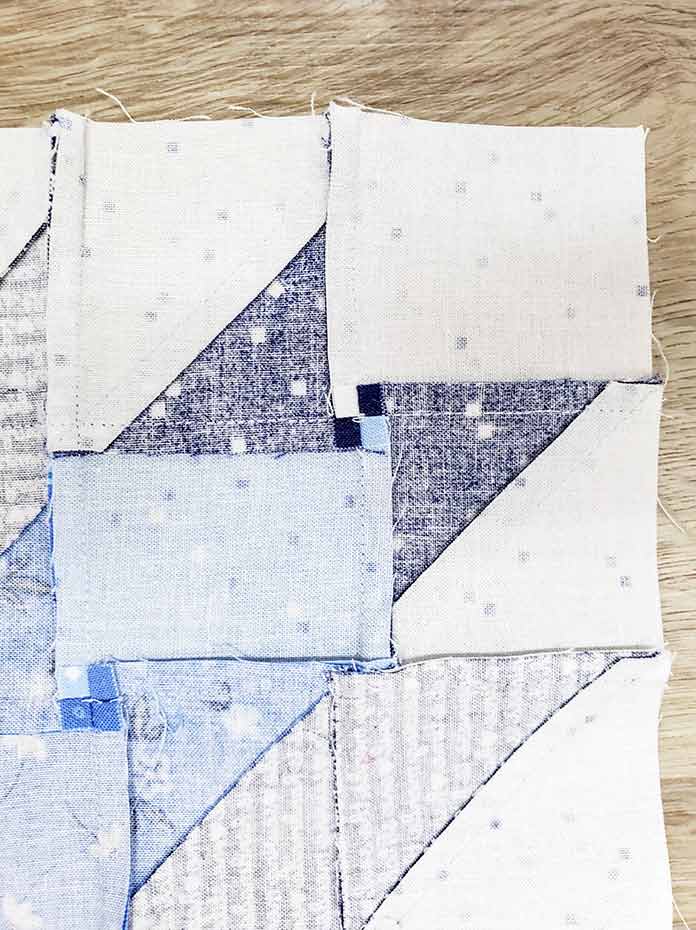 A four-patch with the seams pressed counterclockwise 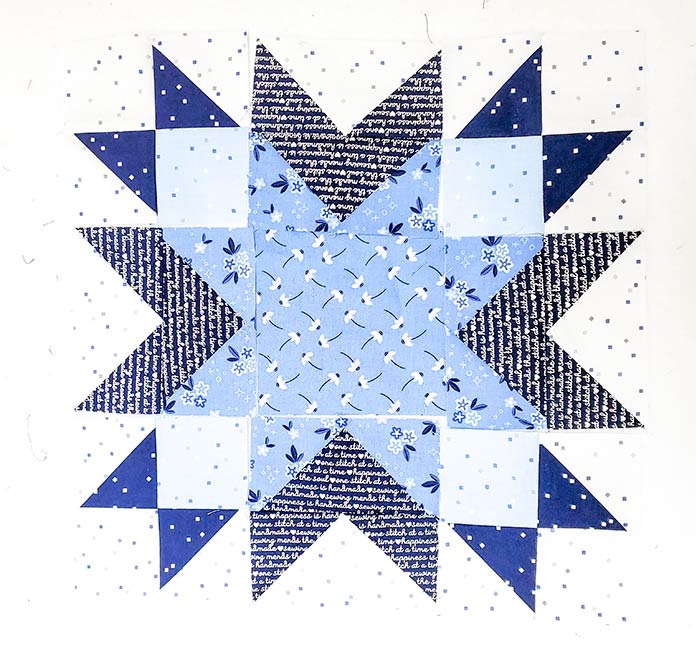 The block components laid out and ready to sew together

And here’s Block 2. It’s beautiful and flat with no bulk at any of the intersections. Just the way I like it!

And should you want to peek at the back, here it is, and YES – all the seams twirl where possible, and all the seams nest to each other. I’m happy! 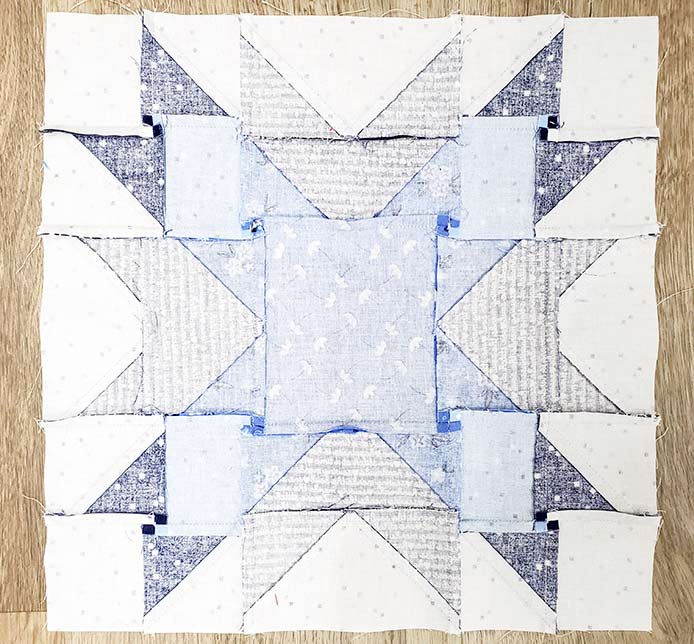 That’s it for me for Block 2. I’m getting ready to cut Block 3 and can’t wait to share that with you.

Have a great day, and don’t forget to share your photos of your blocks!