Welcome to Block 10 for the Spectrum QAL 2020. That leaves just two blocks after today, and we’ll be piecing this quilt together before we know it! I hope you’re up to date. I still have to choose one of the blocks as my 13th block, since my on-point setting requires 13 blocks.

These yummy blocks are made with the Blue Stitch collection by Riley Blake Designs. The fabric is gorgeous! It’s so classic, and I love classic! Before we dive into Block 10 here’s the link to my version of the Spectrum QAL 2020 Block 9 from last month, in case you missed it. 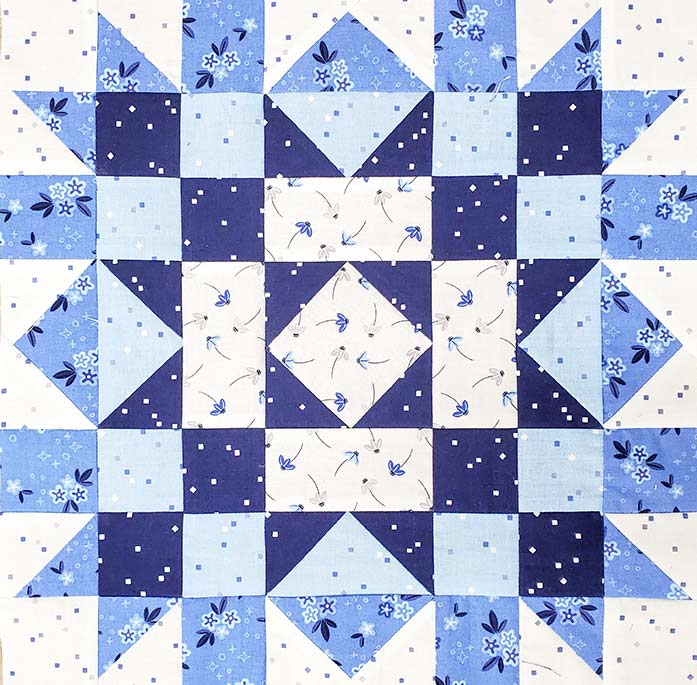 Let’s get started with cutting the components of the Block 10.

Note: My fabrics are labeled by individual blocks, NOT for the entire quilt. So if I have labeled something Fabric D, it might not be the same Fabric D as in another block. I’m picking the fabrics individually for each block as I go.

As I cut the components, I lay them out on my mini design board to verify the placement and the value contrast. 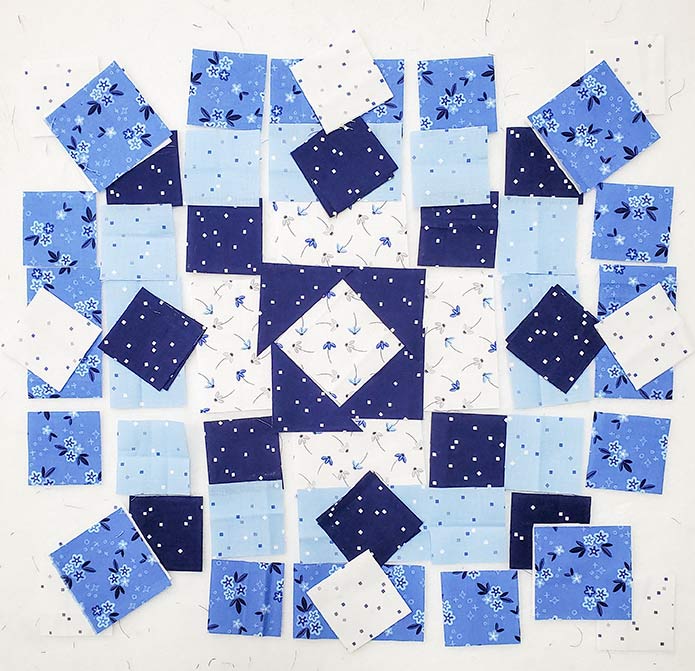 Using the four rectangles of Fabric E and eight (8) squares of Fabric A, make four (4) flying geese units. The units need to be trimmed to 2″ x 3½”.

Using the four rectangles of Fabric D and eight (8) squares of Fabric C, make four (4) flying geese units. The units need to be trimmed to 2″ x 3½”.

Note: Ensure the seams are pressed nicely in the bottom corners. I manipulate these seams with my fingers to prevent tucks in the corners, and follow up with steam on the iron. 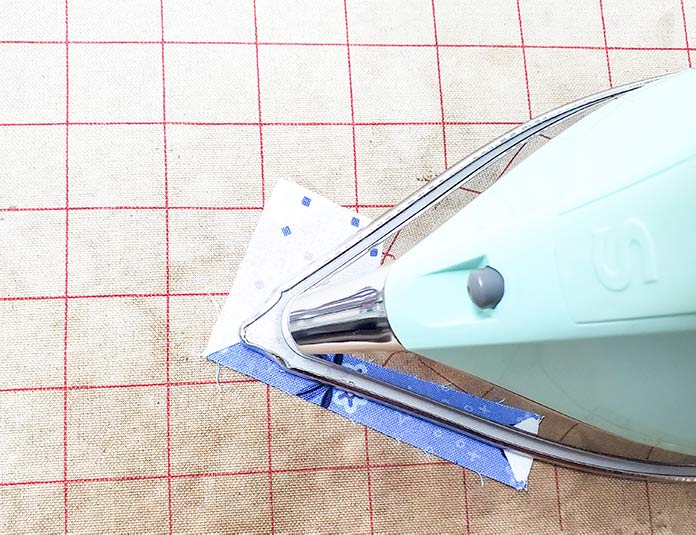 Press the flying geese units with a steam iron.

When the unit is together, I like to trim the little extra bits away using the lines on a square quilting ruler. My preference is a 6½” ruler for all my trimming. 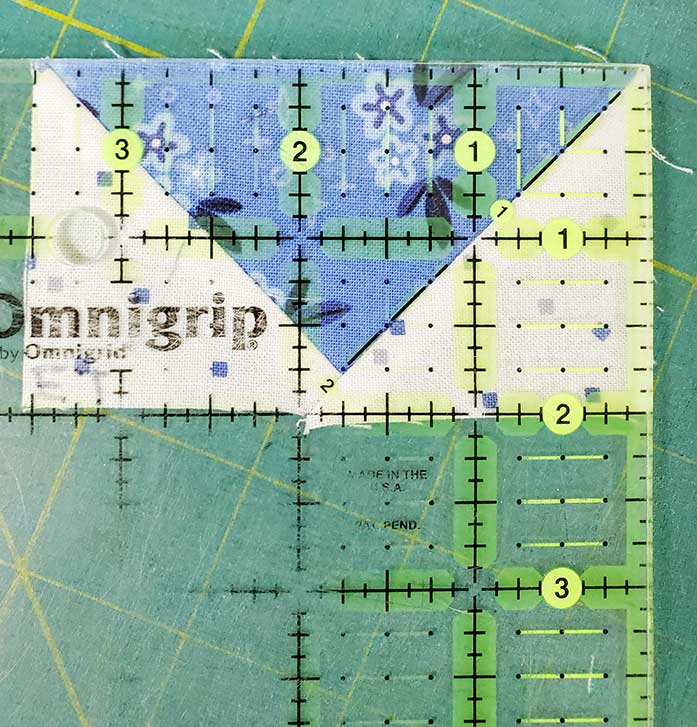 Once you’ve trimmed the right-hand side and across the top, rotate the flying geese unit around and trim the remaining two sides. This ensures the center seam is as centered as can be, and the end of the diagonal seam is in the corner. It’s not always perfect, but center the unit as best you can.

Note: If you are left-handed, rotate the ruler (and the flying geese unit), so the 1″ markings on the ruler are in the top left-hand corner. 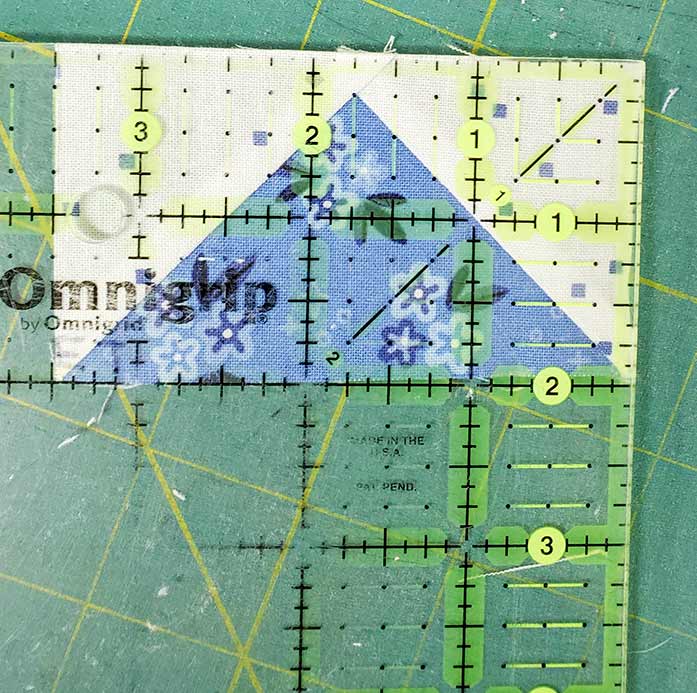 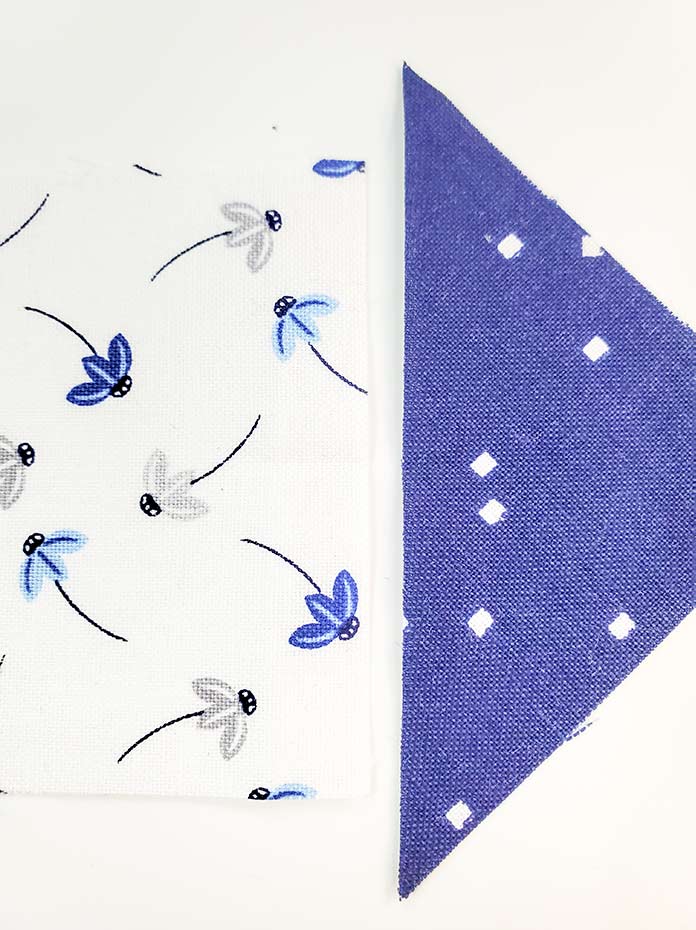 Matching the triangles to the center square

Sew a triangle onto the other side and press away from the center. Trim off the dog ears. 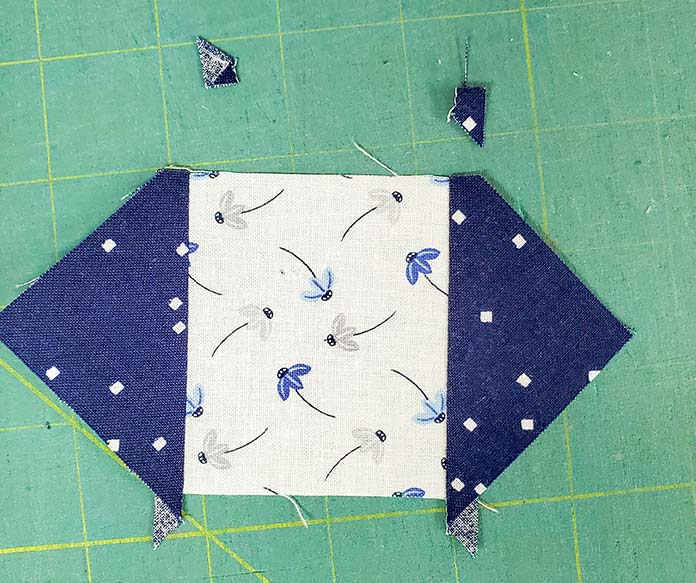 Trimming the dog ears from the center unit

The next step is to add the two remaining triangles. 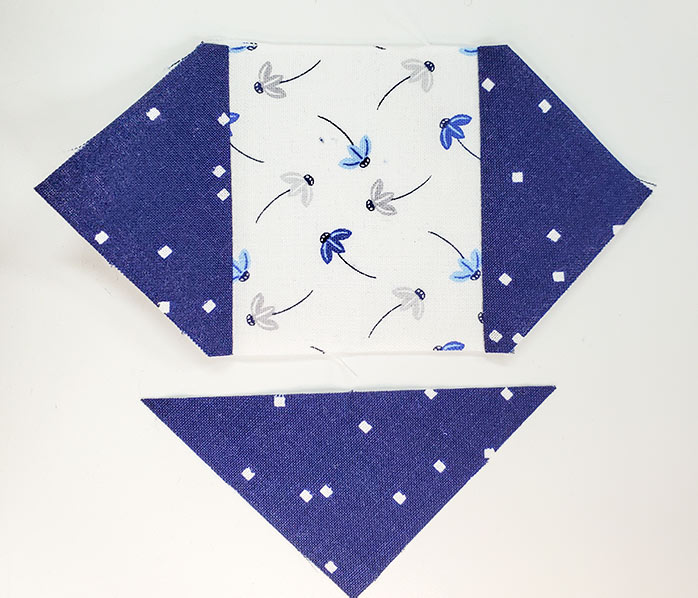 Adding the third triangle to the center unit

Square the unit to 3½”. Position the ruler as best as you can to achieve a ¼” beyond the four points. The more accurate you get this, the more likely you’ll have points on that center star. It’s never perfect, and that’s okay. 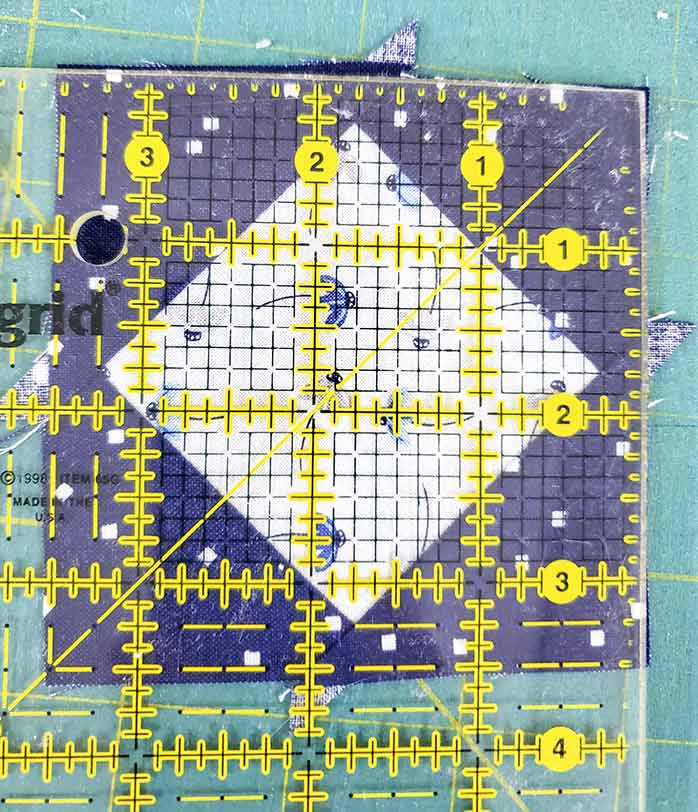 Squaring up the center unit

Using the 2½” squares of Fabric A and E, make half-square triangles. The traditional way is to draw a line on the back of the light fabrics. Today, some sewing machines have a laser light that you can use to guide the sewing of those lines rather than mark the lines. Hmm, a huge time saver – I like that! 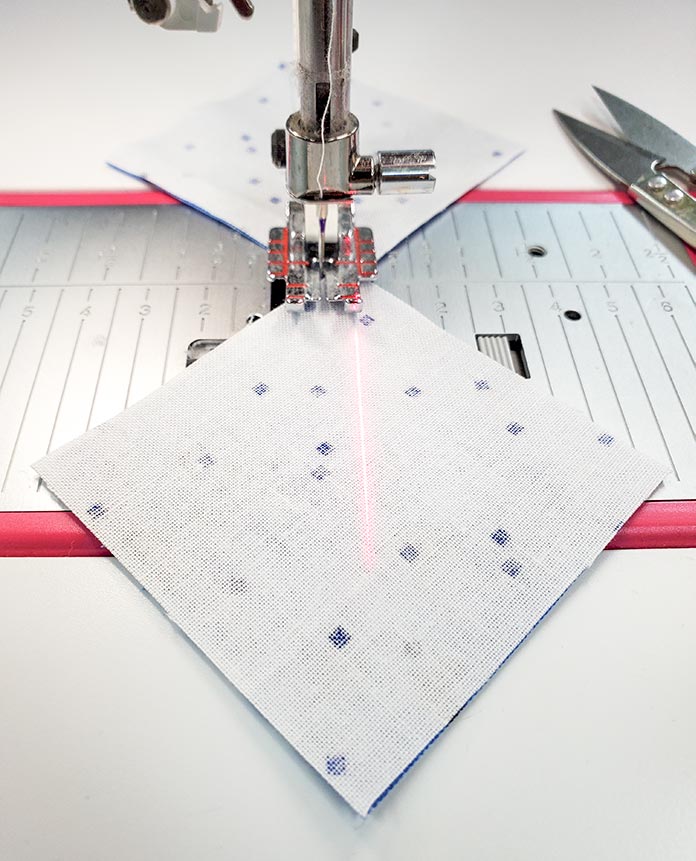 You’ll make eight half-square triangles, which you need to trim to 2″. Here’s a quick reminder of how to trim them. Use the diagonal line on the 6½” square ruler to position the ruler. It’s so easy, and this ruler is likely sitting on your cutting table, just waiting. Trim up the right-hand side and along the top. Rotate the unit around and trim the remaining two sides. 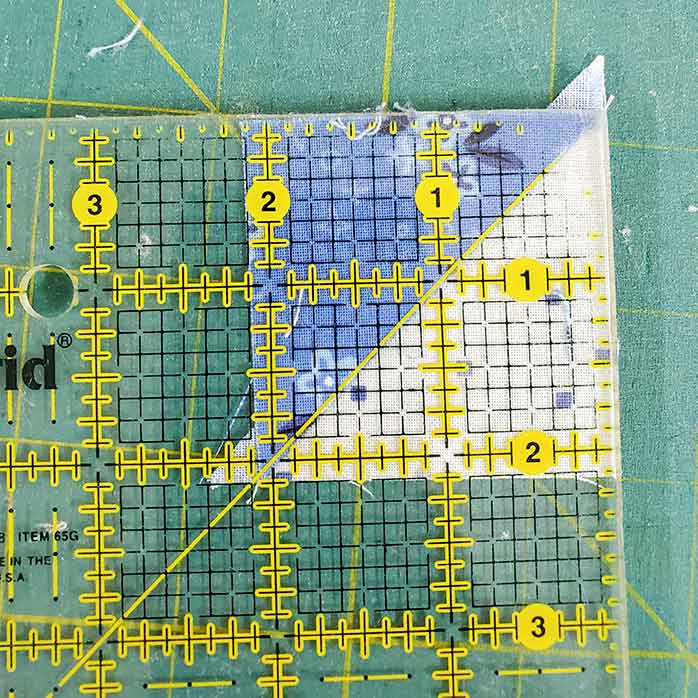 Step 4 Sew the block together

The smaller components are together! It’s time to sew the block together. 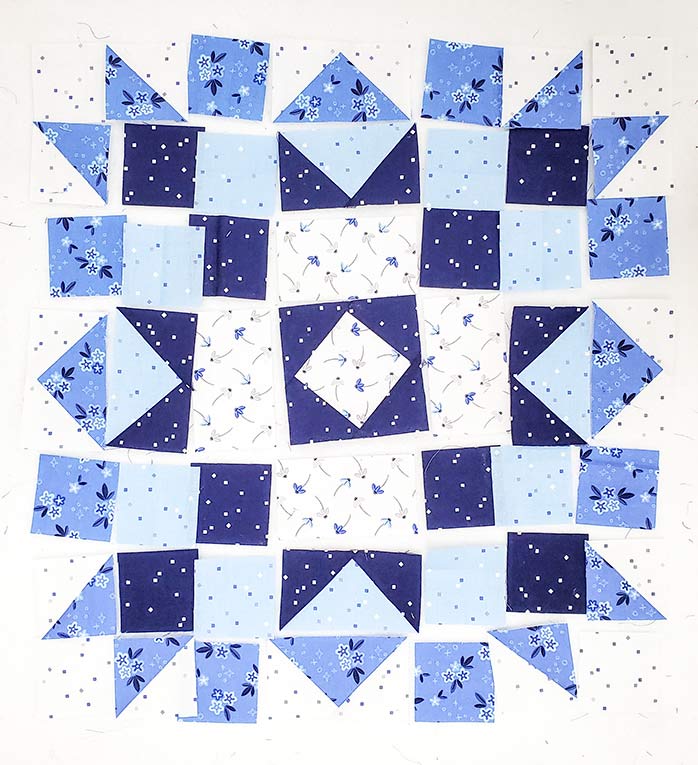 The components of Spectrum QAL Block 10

You know me and twirling seams. I love when the seams of the block lie perfectly flat, and it’s so easy to do with this block.

I decided to sew it together by sewing four-patches, starting with the top left-hand corner. The trick to success with twirled seams is to ensure each four-patch is sewn and pressed in the same orientation/direction. If you’re not consistent, the seams won’t line up.

The picture shows the orientation I like to use. It doesn’t matter if the piece on the left points up and the one on the right points down – just be sure the pieces are consistent throughout the block. 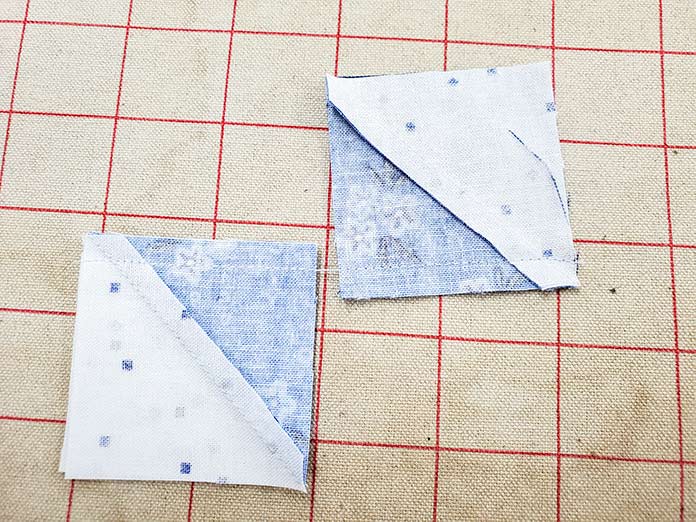 The four-patch is on the ironing surface, ready to press 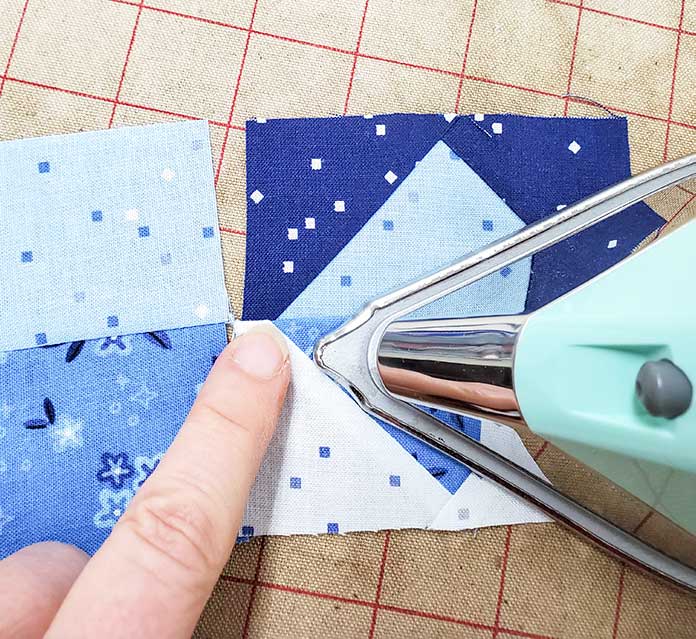 Manipulating a lumpy intersection with a finger before using the iron

As you can see, I started by sewing four-patches together. Here are the first two in the top left-hand corner. 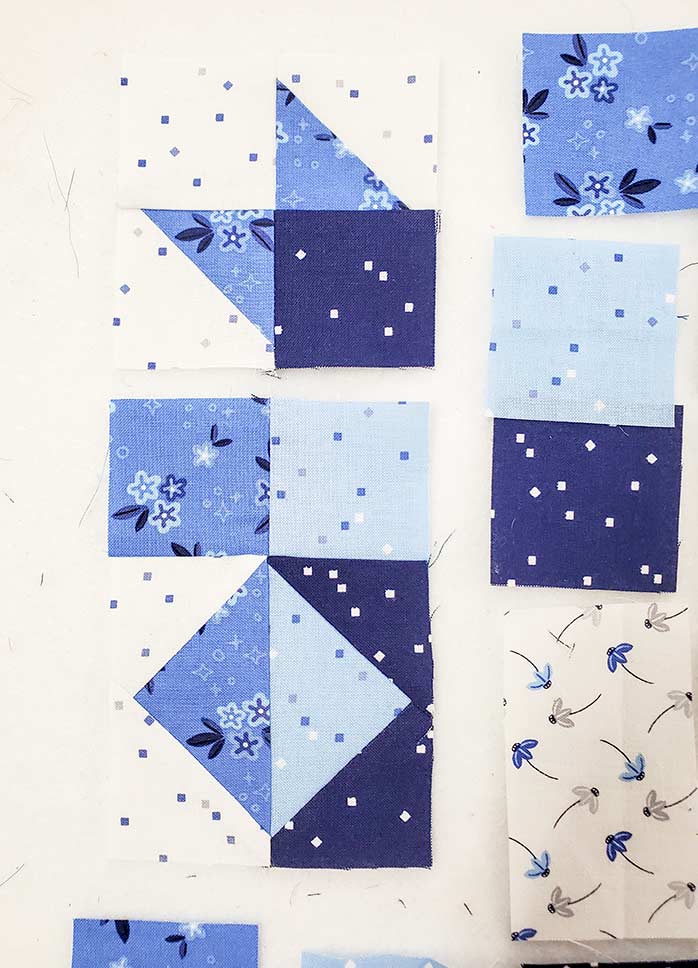 Two four-patch units of the block

Here’s the entire block assembled into four-patches, except for the odd pieces around the block’s right and bottom. 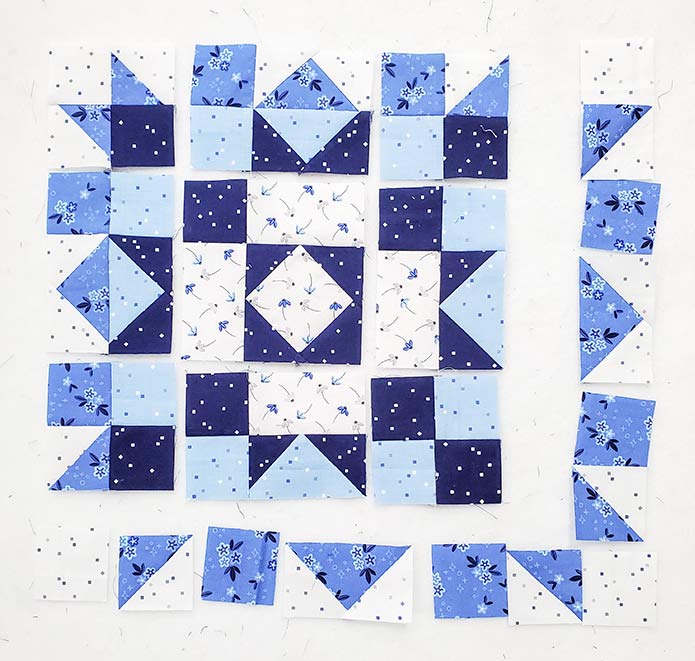 The quilt block as four-patch units

I sewed the outer pieces in pairs, using the seams in the four-patches to dictate which way to press the seam so they nested to each other. 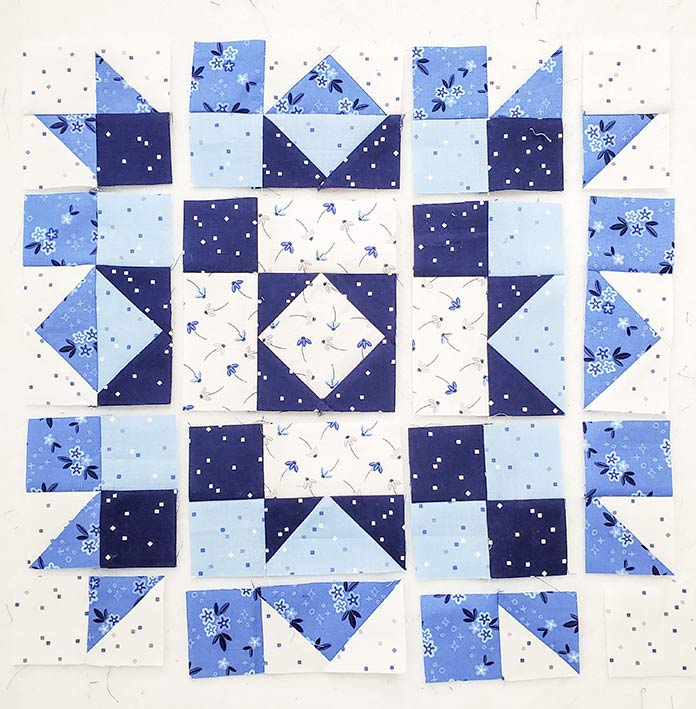 I then sewed the components into larger four-patches, twirling all the intersections as I went. If you’re consistent in your pressing of the initial four-patches, this’ll be super easy. 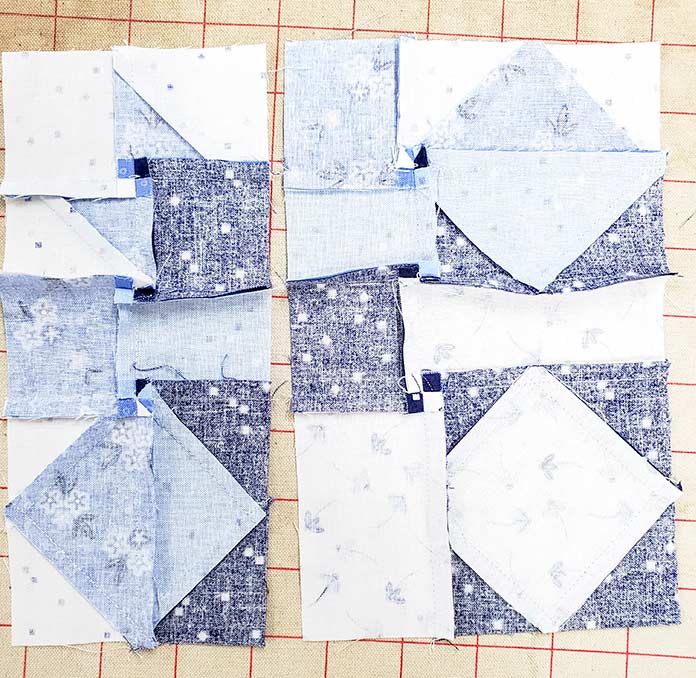 Twirling the seams as the components as the block is assembled

TIP Go slow, especially when you’re starting with a bulky seam at the beginning. 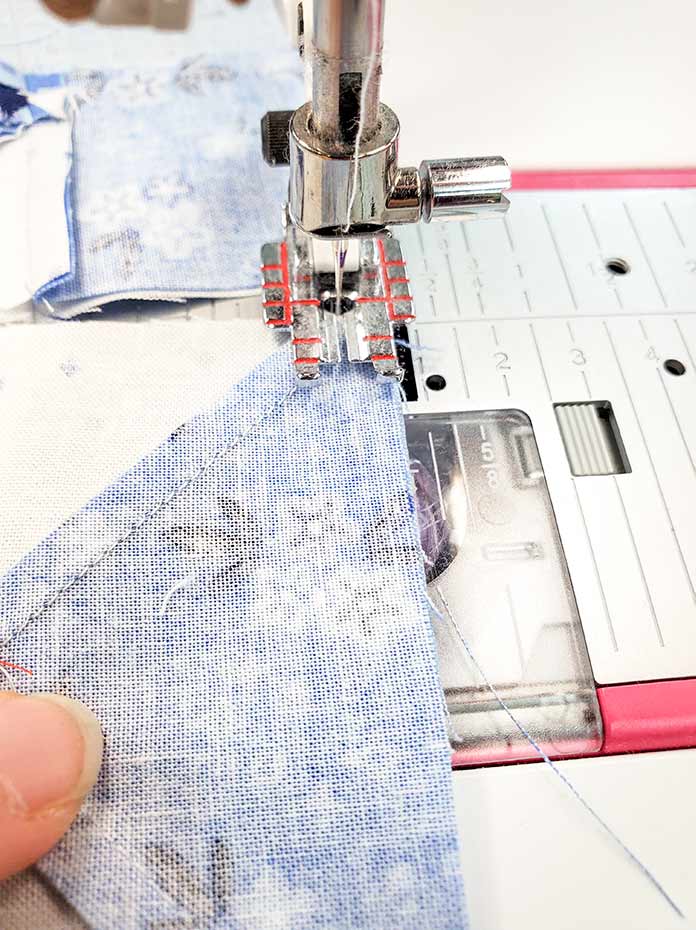 Start slowly at the lumpy ends of seams.

Match up the nested seam allowances as you go. I don’t pin, but instead rely on these nested seams to assemble the block. You’d be surprised at how much this technique improves accuracy and saves a whole lot of time. 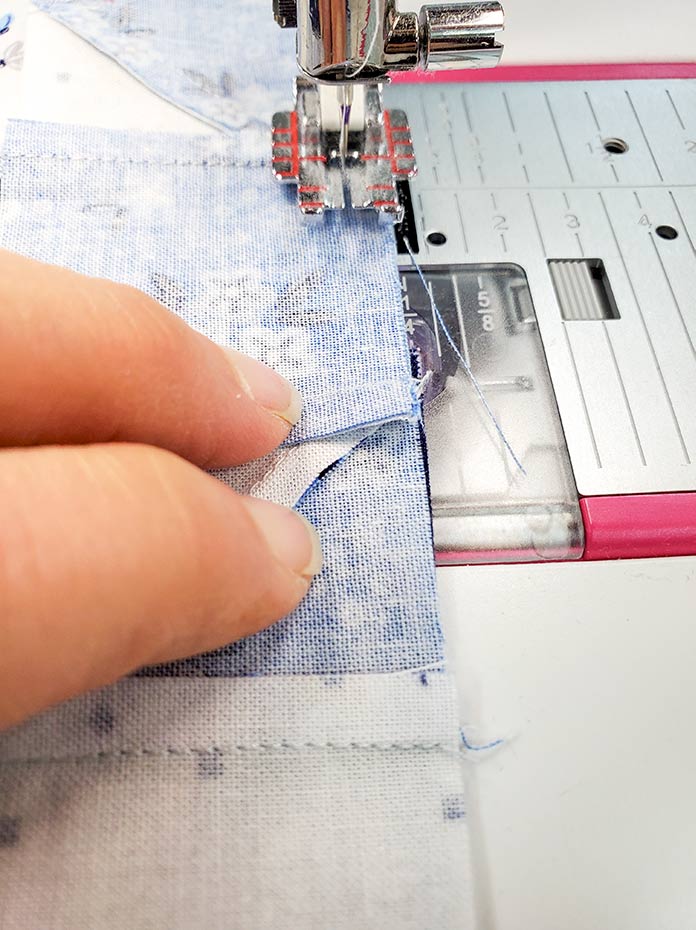 Matching the nested seams while sewing a quilt block

You can use your fingers, as shown above, or use a quilter’s stiletto to hold the pieces together. 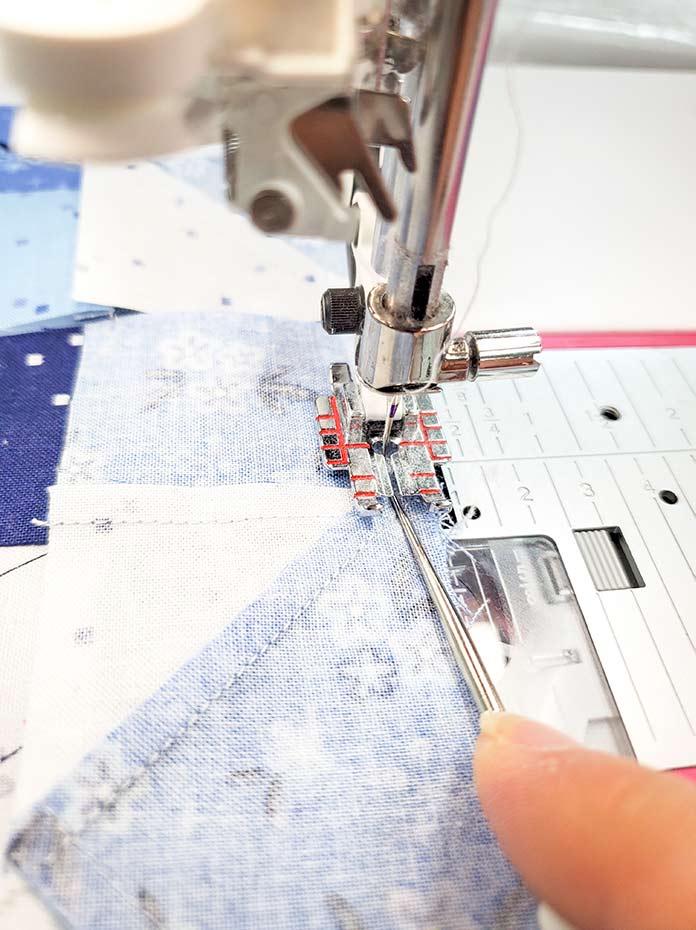 Hold onto the end of the pieces until your needle has cleared the end of the line of stitching. If you don’t, your sewing machine will do crazy things with the end of the seam, and it’ll be harder to match up the nested seams. 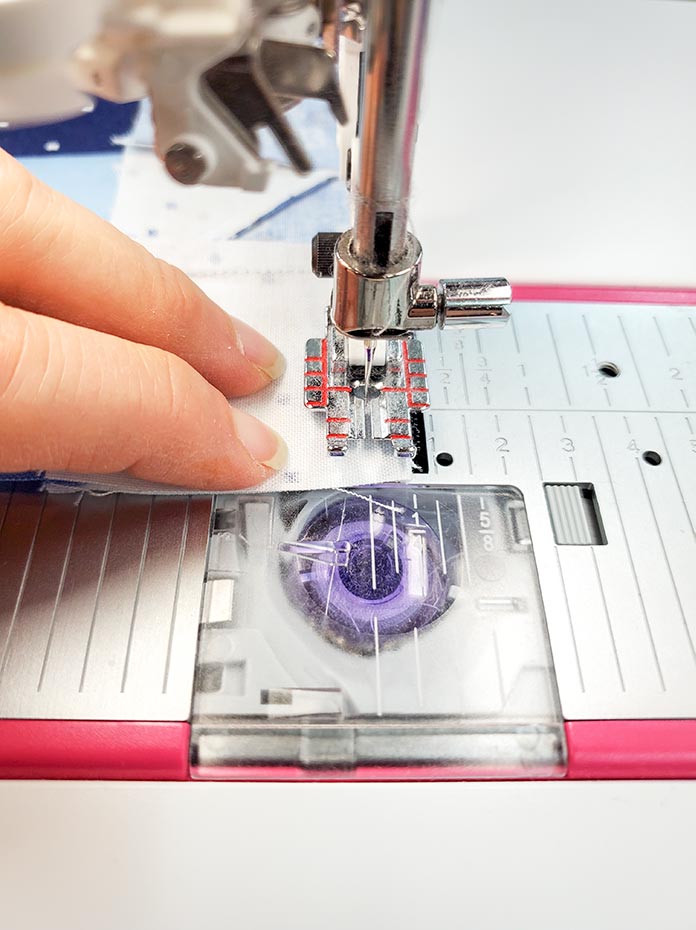 Hold the fabrics with your fingers until the needle has cleared the fabric.

Now the block is in four sections. Sew those last four units together as if they were a four-patch. 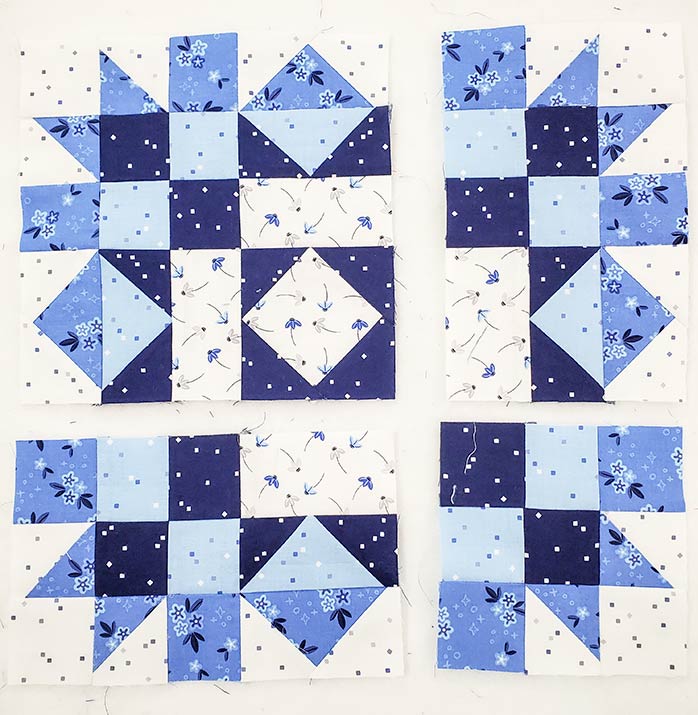 The Spectrum QAL Block 10 is now in four pieces.

Here’s the final block – I love it! Perhaps this will be my extra block?

Yes, each intersection is twirled on the back. The front lies perfectly flat since the bulk from the seam allowances is evenly distributed around each intersection. You’ve got to love that look! It can be tricky to open up the seams around some of those lumpy intersections, but persevere – it’s worth the effort. 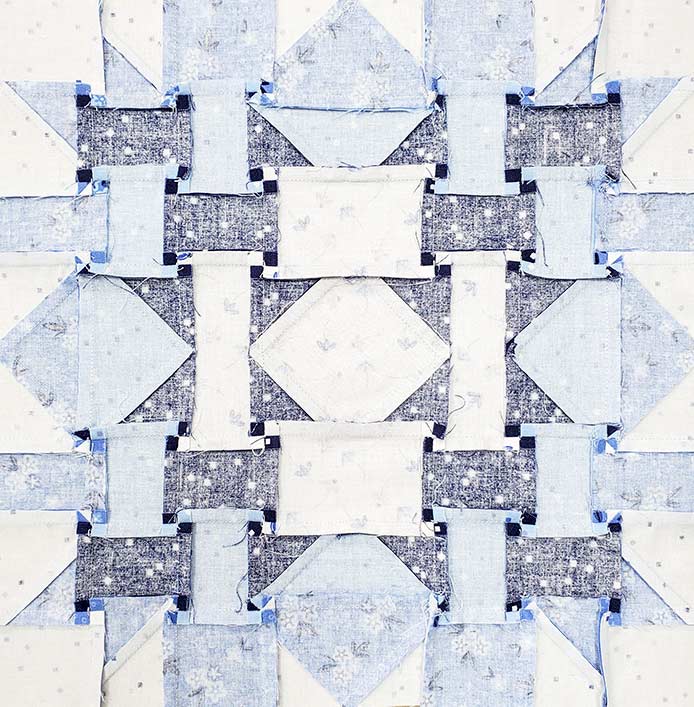 And that’s it! Two more blocks to sew, and then I need to think about the 13th block, and start sewing the quilt together. I’m so excited and can’t wait to see what the completed top looks like using the Blue Stitch collection by Riley Blake Designs.

Be sure to join me in 2 weeks for Block 11. We’re so close to assembly, so get yourself caught up if you’re a wee bit behind! Share your Blocks using #TheSewGoesOn. 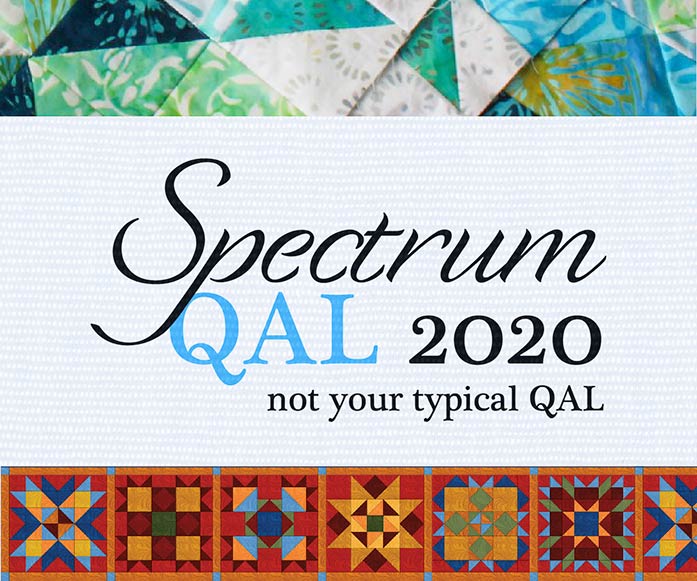 It would really help in the printing if all the blocks had the choice to download it as a PDF–not all pages do so, and I get pictures cut off. And on some pages I have white spots covering some of the photos.