If you’ve been following along this week, you know that we’re making the Triple Churn Dash tabletopper using Northcott’s ColorWorks Premium Solid 9000 and Toscana fabrics. In making this tabletopper it’s better to apply the 2 tips for pressing seams to reduce a lot of bulk and achieve good work. These are so simple too.

I’m going to show you the finished project and a bonus project that I made. Then I’ll show you how I would use this block to design a larger quilt and how colors and fabrics can change the look!

I’m just skimming the surface of what’s possible, but hopefully, you’ll get a couple of ideas that will start the wheels churning so you can come up with your own design.

One tip about trimming your quilted project. 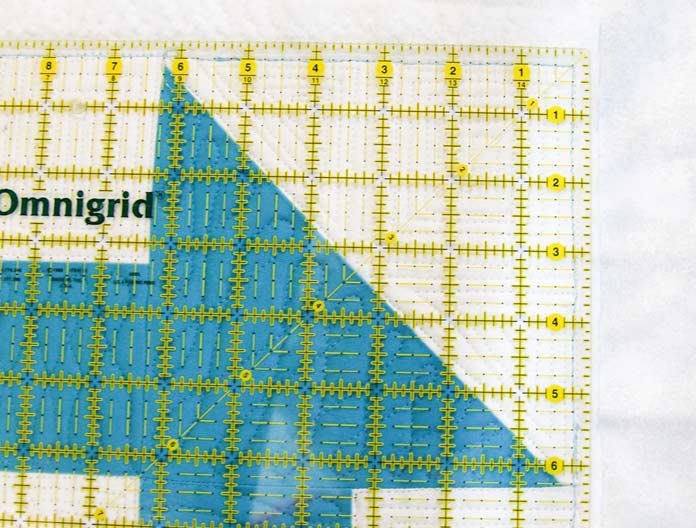 Trimming ⅛” beyond the edge of the project 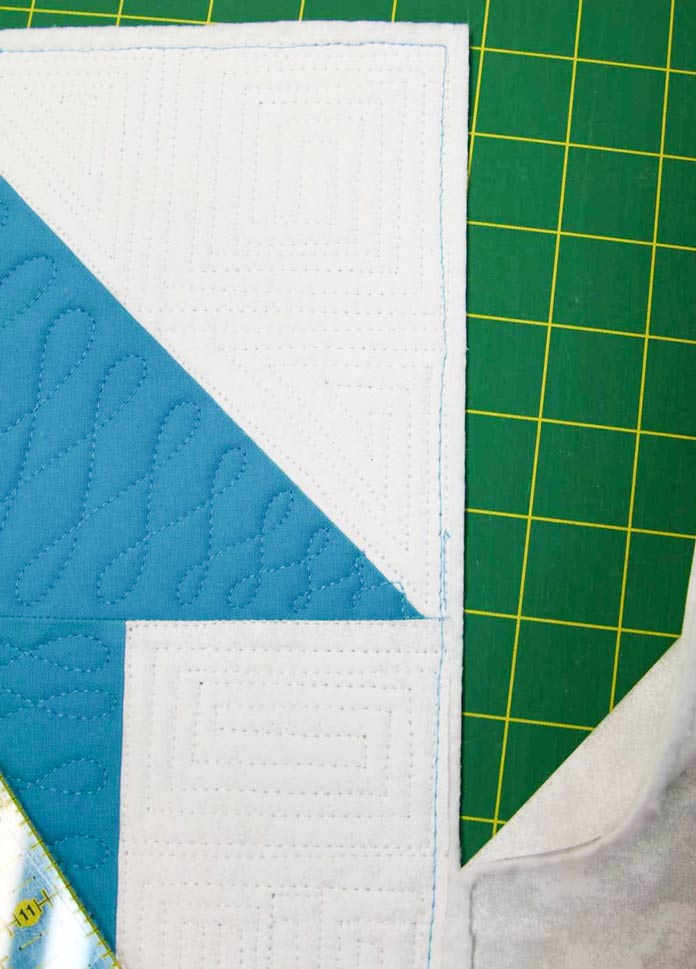 The trimmed edge – ⅛” beyond the edge of the tabletopper

Here’s the finished project. It’s a super easy tabletopper and can be made in any color combination. Use only one light and one dark, or use fabrics from the same color family as I did, or make it seasonal with some of Northcott’s amazing seasonal collections. This tabletopper can be used for any occasion! 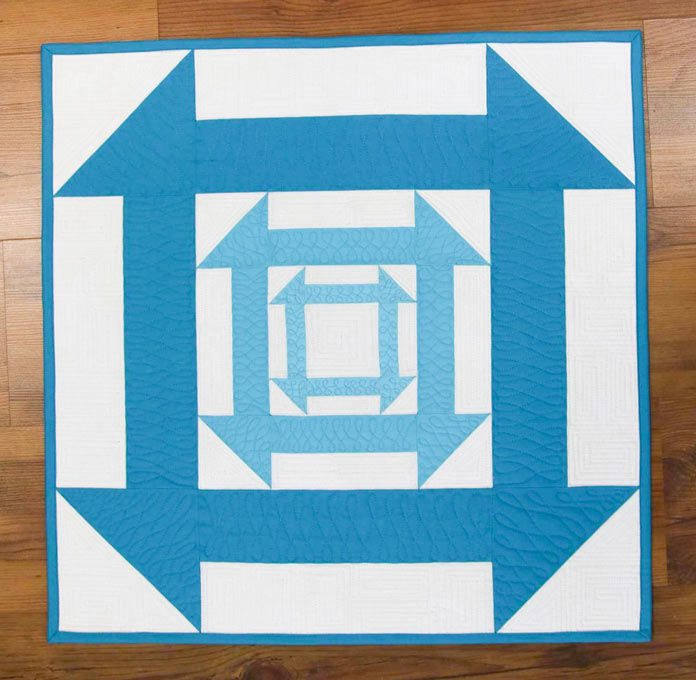 When I was making the blocks for the pictures, I was merrily cutting away and realized I had enough to make three small (6½”) blocks.

What to do with three blocks? Why a table runner of course. The setting triangles for this runner were made by cutting one 10½” square that was then cut on the diagonal twice to get this cute little runner. Alternatively, I could have quilted each block individually and made some mug rugs as well. 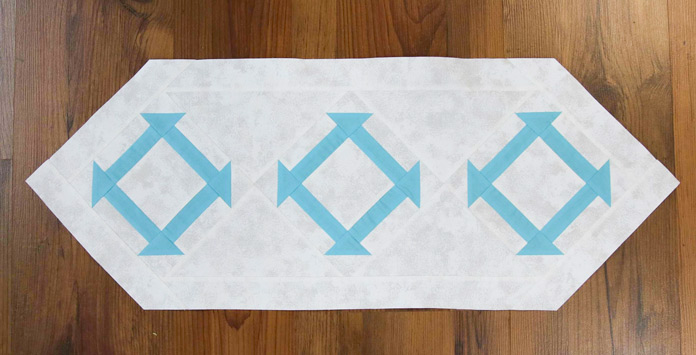 Table runner made with extra blocks

Now that we’ve seen those finished projects, let’s have a look at how else we could use this block and some color variations, as well as using a different fabric collection.

In this version, I’ve taken four of the large (24″) blocks and put them together.

Then, added a small outer border in the same white as the background so there’s no danger of the points getting hidden by the binding. The thin outer line is the blue binding. The blocks butt directly to each other which can cause some issues with bulk at the intersection of those points. This quilt measures 50″ square. There’s lots of negative space around the blocks to showcase some beautiful quilting. 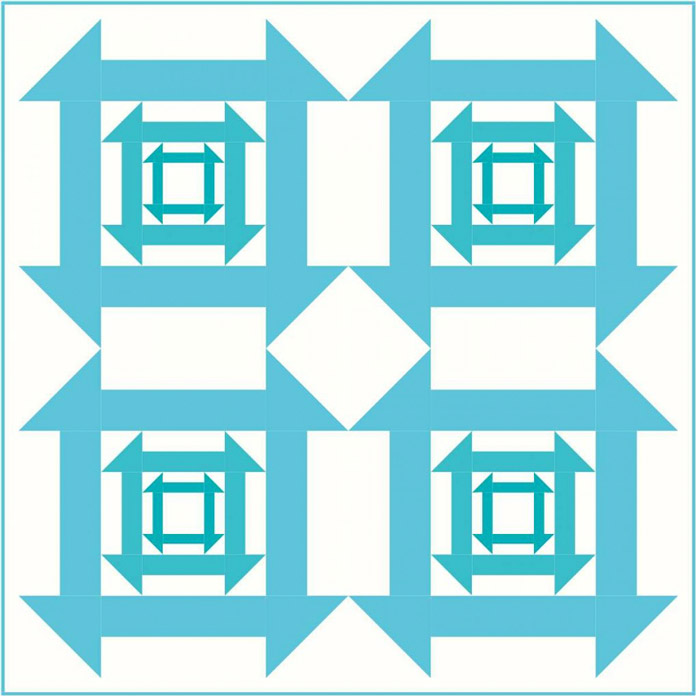 I used the same layout as above, but this time, I added a 3″ sashing of the same Toscana fabric (9020 – 10) used for the background between the blocks and as an outer border. Now there’s no issue of bulk around the points of any of the blocks. Lots more negative space for quilting. The finished quilt is 57″ square. 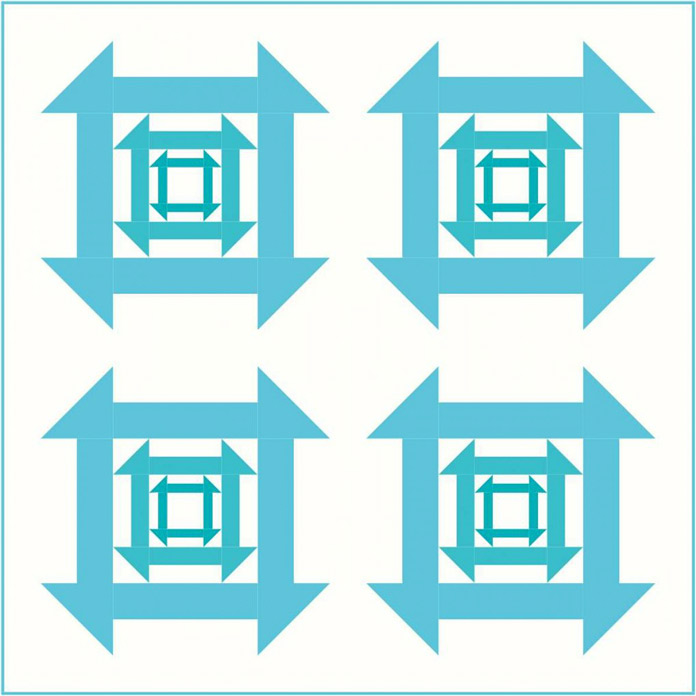 In this version, I placed the 24″ blocks on point. This significantly increases the size of the quilt to 68″ square as we’ve added a center square, setting triangles and setting corners. Notice how the blocks, when set on point, seem to be more dynamic than when set straight. Definitely a lot of negative space for quilting. 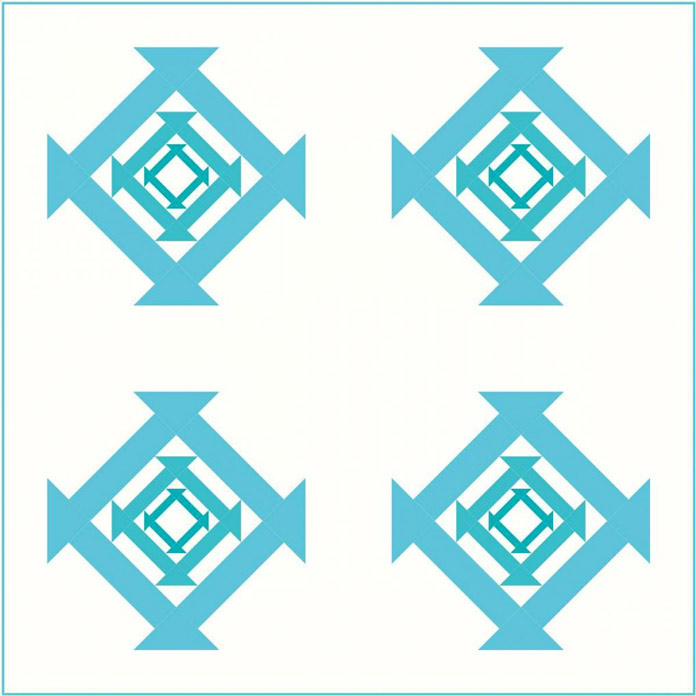 The resulting quilt looks very busy and I envision a lot of bulk where those points of the blocks met each other. The finished quilt measures 62″ square. 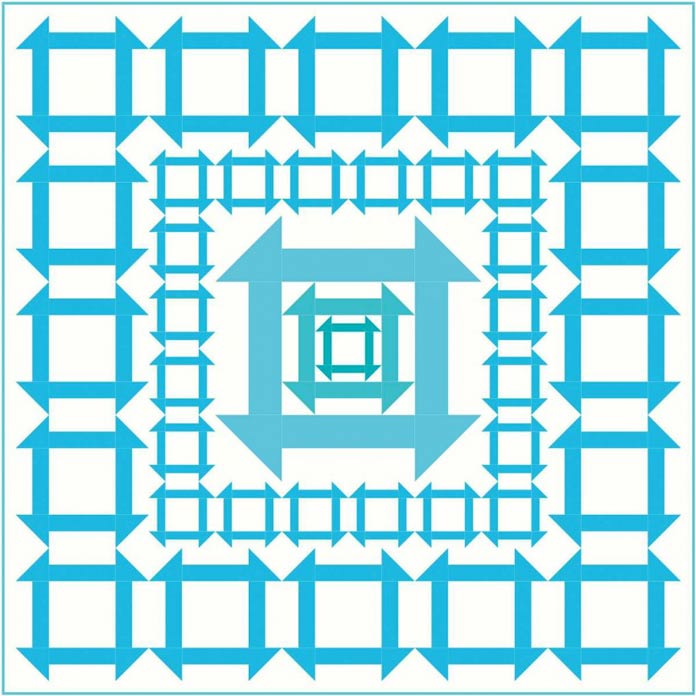 This solution also doesn’t address the issue of the bulk where those points meet. 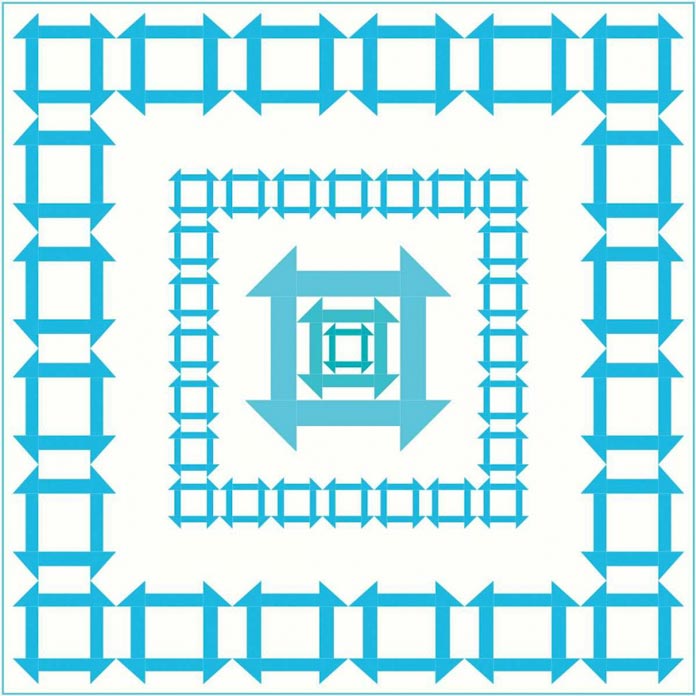 If I simplify the design and only use one round of 12″ churn dash blocks, I get a very nice crisp looking quilt. I’ve added some negative space between the center block and the churn dash row. I also included a small border on the outside of the quilt to ensure all those points will be sharp. Finished size of this quilt is 64″ square. I still haven’t addressed the issue of those points meeting. 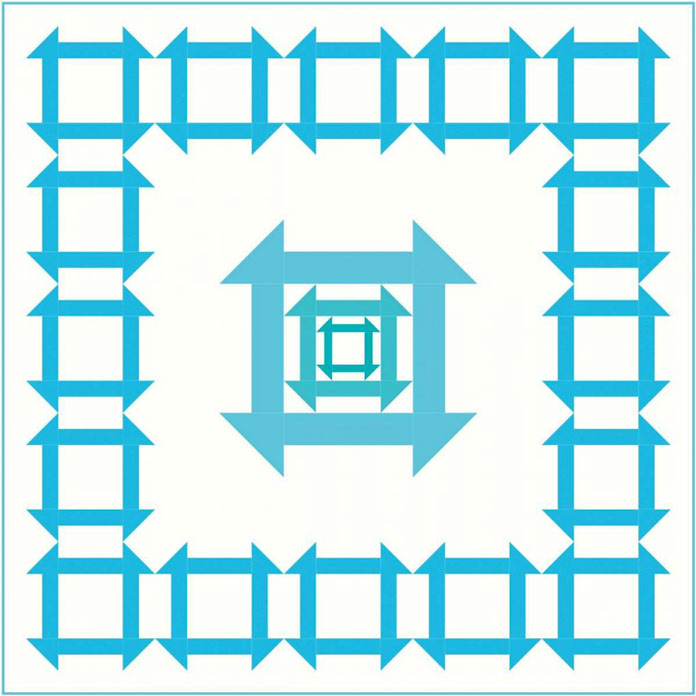 I felt the inside of that 12″ churn dash block (in the previous version) looked too empty so why not try a 12″ double churn dash block. This helps to echo the block in the center and reduces the amount of negative space. It also added an extra border on the outside of the churn dash border. The size of the quilt is 64″ square. I definitely like this better and I like the value contrast in the blocks in the outer border. 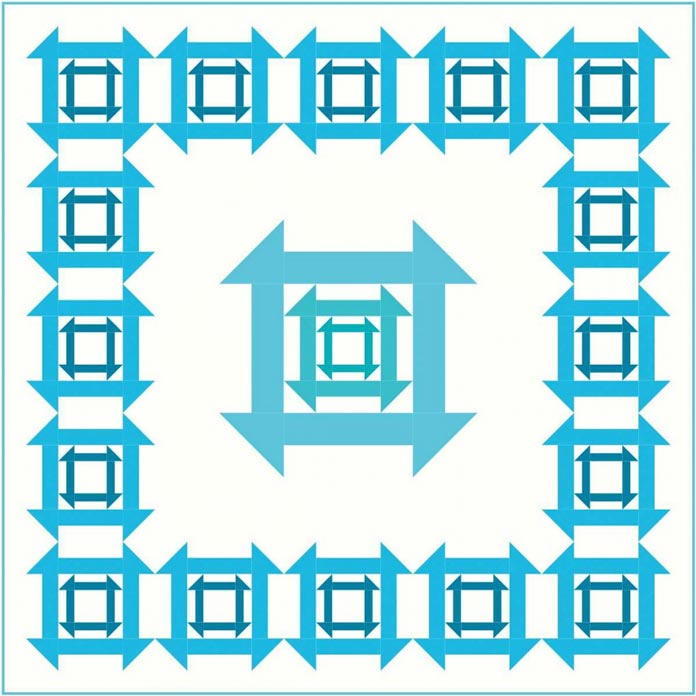 Since it’s easy enough to do, why not try the center block on point? It looks great and adds a lot of movement to the quilt. You still have negative space but in a different configuration. I kept the double churn dash for the outer border as well as the white outer border. Finished quilt measures 62″ square. 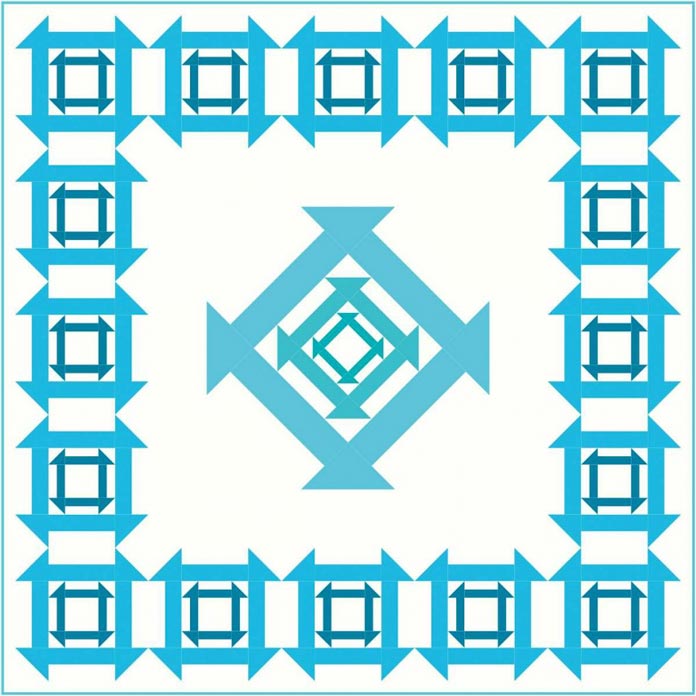 The center block looked so amazing set on point that I decided to set the regular churn dash block on point in the border. I love it! I can feel that triple churn dash pull me into the quilt. The finished size of the quilt is 50″. I added two borders in the same colors as the churn dash to add some interest and notice that I shouldn’t have any issues with bulk where the blocks meet up. 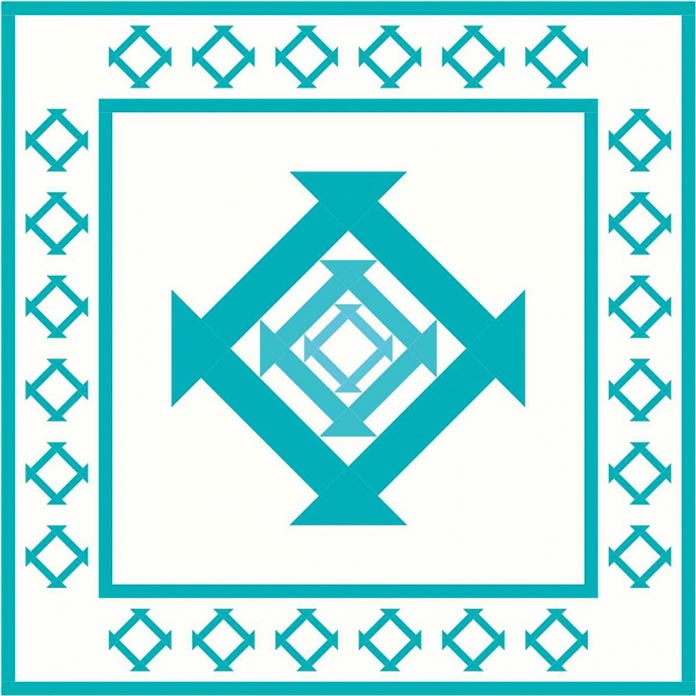 Version 10 – Change up the colors

Now that I found a design that I’m really keen on, let’s throw some different colors into the mix. I grabbed some solids from the Northcott ColorWorks Solids 9000 collection.

Looks equally nice with the green background and various shades of green for the churn dashes. 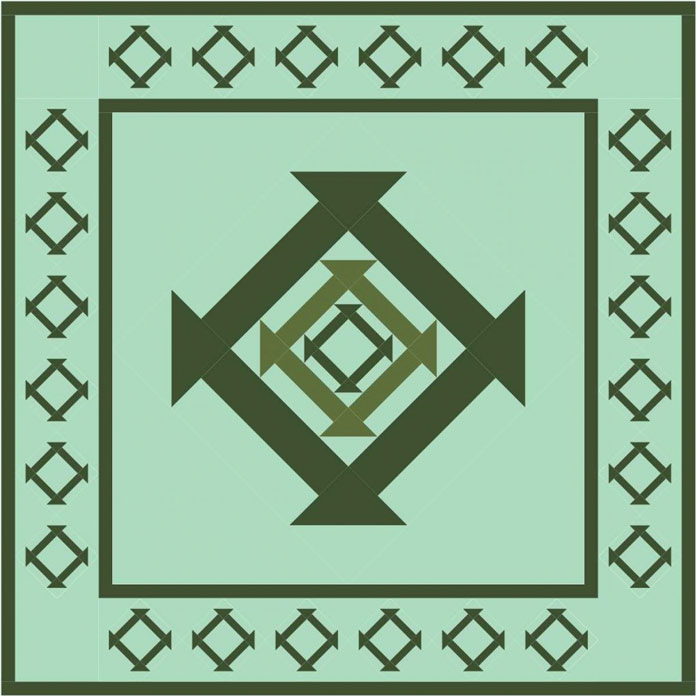 Change the colors to green

Version 11 – Change up the fabrics

If you’re not into solids, why not try one of the textured basics from Northcott. Here I’ve used Canvas with its weathered look texture in gray and blue. It looks amazing! 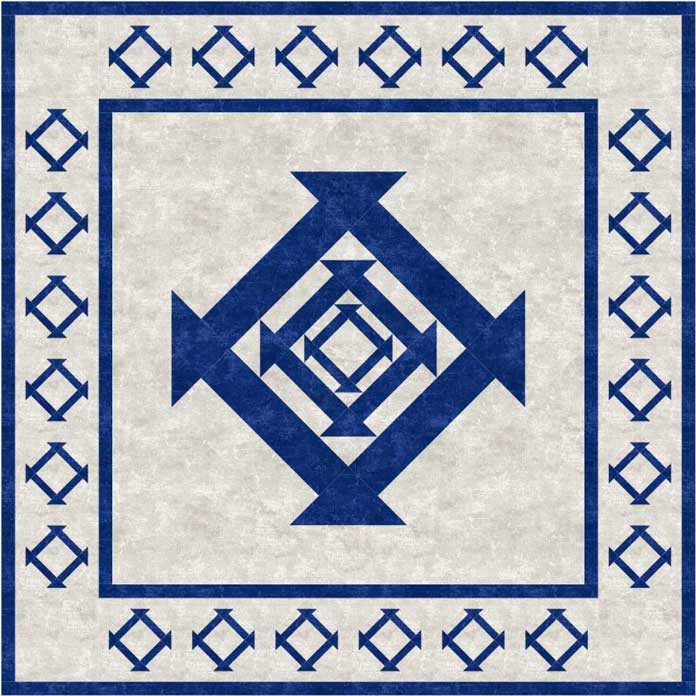 I hope you like this brief example of designing quilts. I could go on and on with different designs, but I think you get the idea. It’s an amazing process and I love being able to play with many options until one of them speaks to me. Once I have something that I love, then I start to bring in the fabrics. As mentioned on the first day, it’s so easy to download any of the Northcott collections into the computer-based design software.

I’ve made many quilts that were designed this way and the results look just like the picture. I love that!

If you make a tabletopper or a quilt using the Triple Churn Dash block and Northcott fabric, we’d love to see it!

This is part 5 of 5 in this series.
Go back to part 4: 2 tips for pressing seams that save the day and a lot of bulk

Use Silco thread to add more punch to your applique edges

Fun with Letterpress fabric and making a...